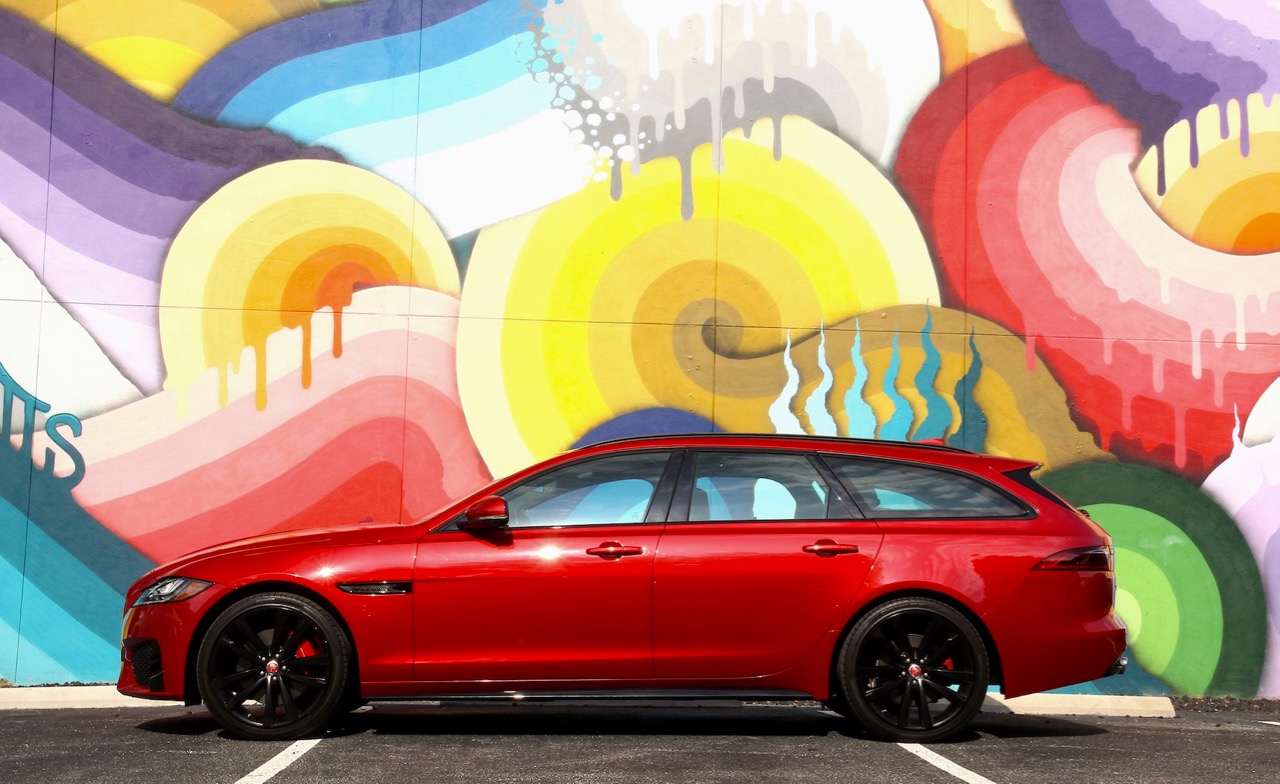 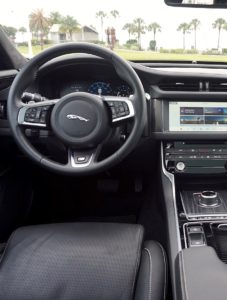 While America’s unbridled love affair with tall-riding crossovers shows no signs of cooling, enthusiasts are chanting the praises of a new, admittedly tiny, crop of luxury lifestyle wagons on offer. Yep, you heard that right; the return of Uncle Waldo’s station wagon, though thankfully without the faux-wood sides. The latest to join the ranks is Jaguar’s sleek and super sexy XF Sportbrake.

What’s the sports wagon appeal? Being sedan-derived they tend to be lighter, swifter, more dynamic, and generally more fun to drive than similar-sized crossovers. They can even haul more stuff. Jaguar’s entry is definitely a toe-in-the-water exercise. While the wagon-loving Europeans get a full range of Sportbrake variants, here in the U.S. only a single, top-of-the-line model is on offer; the XF Sportbrake S AWD powered by Jaguar’s 3.0-liter 380-horsepower supercharged V6, and with all-wheel drive as standard. Pricing kicks off at $71,445, though our well-equipped tester invoiced at a rather eye-watering $84,815. 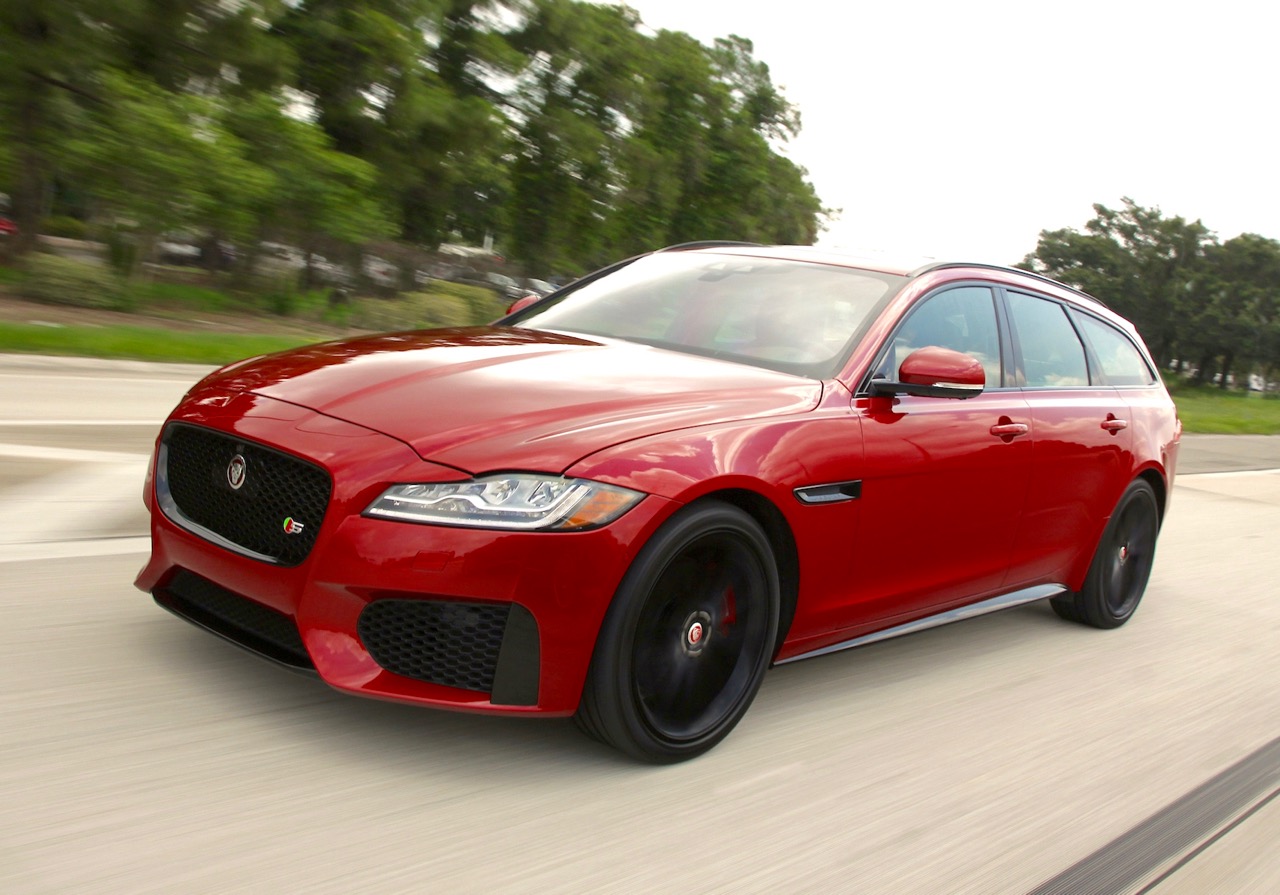 Much of the Jag’s considerable appeal is its sleek, head-rotating style. That long, swoopy roofline coupled with the rakish, fastback angle of the rear screen, accentuates the low, lithe look of the car, especially in profile. Throw in our tester’s gloss black trim and shiny black 20-inch alloys, and the car looks ready for the racetrack.

The real surprise here is just how capable the Sportbrake is at hauling stuff. Fold down the 40:20:40-split rear seats and you can make use of an impressive 69.7 cubic feet of space. That’s not only more cavernous than Mercedes-Benz’ E400 wagon and Volvo V90, but it betters the 63.5 cubic feet you get with Jaguar’s own F-Pace sport-ute. 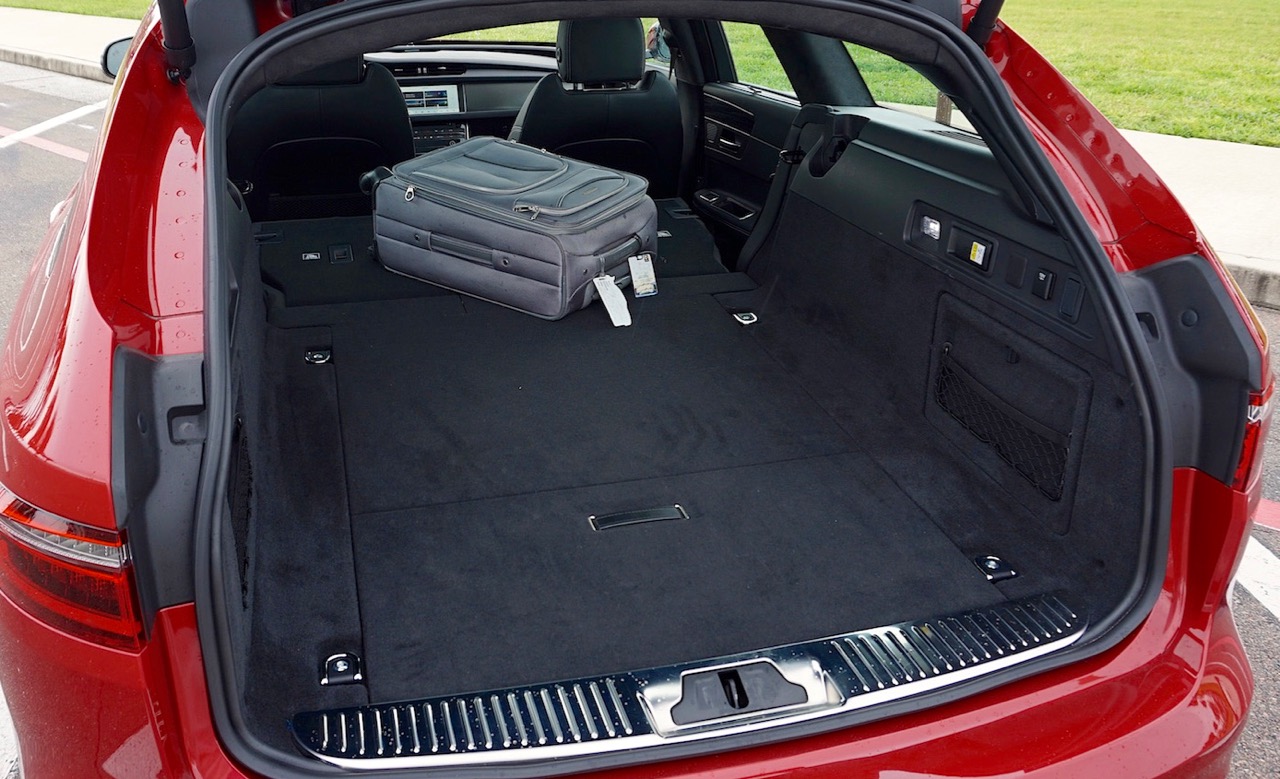 Take out the tape and that nicely flat load area stretches 78 inches long, and 41 inches wide at its narrowest point. Alas the drawback of that swoopy roofline is height; the tailgate opening measures just 26 inches. The Sportbrake is, however, well equipped to carry a heavy load. It comes standard with rear auto-leveling air suspension that uses inflatable air springs to ensure a level ride height, no matter how many over-weight Samsonites you throw in the back! 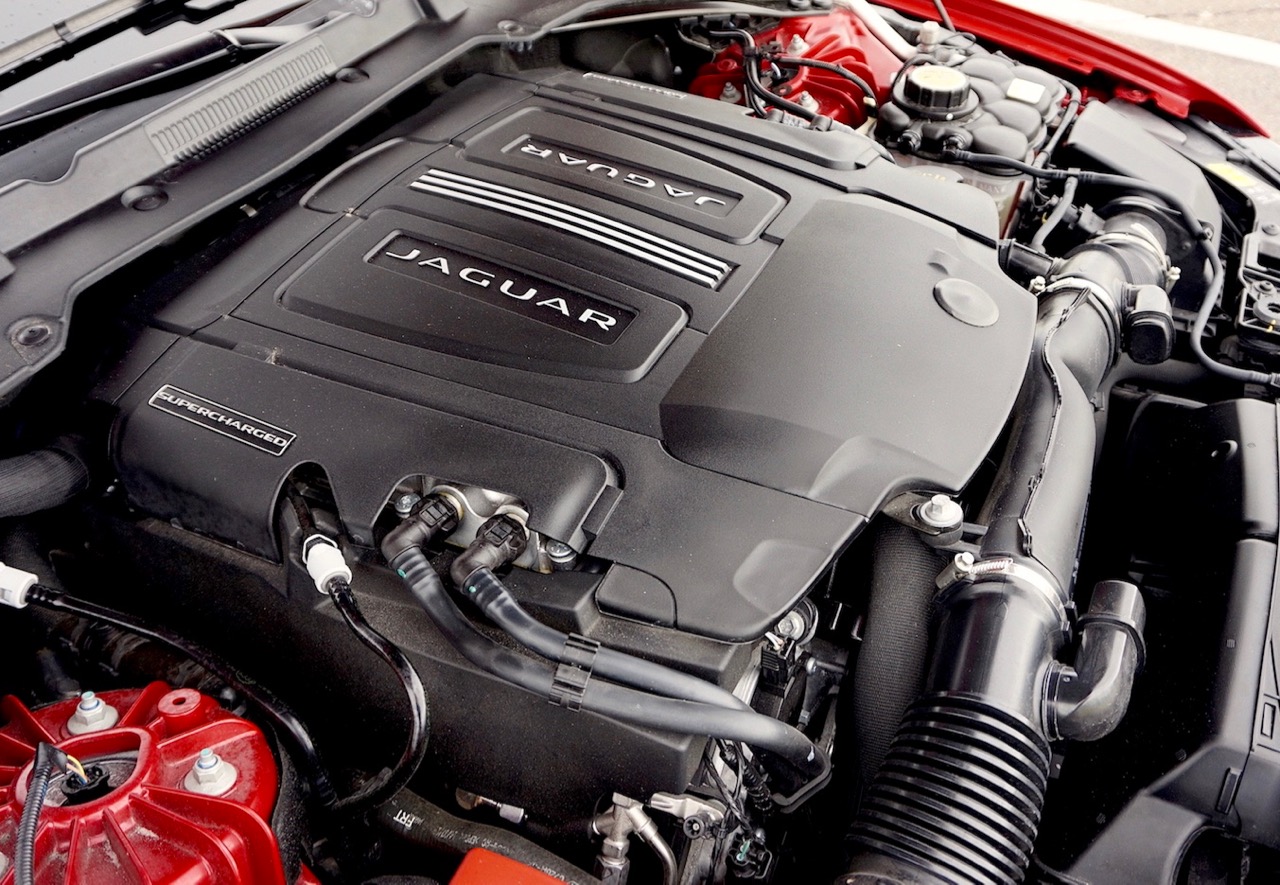 With the same 380-horsepower 3.0-liter supercharged V6 under the hood as Jaguar’s racy F-Type roadster, the XF Sportbrake was always destined to be quick. Jaguar claims 0-to-60mph in 5.3 seconds – only 0.2 seconds slower than the equivalent XF S 3.0 sedan – and if anything, it feels even swifter. The Sportbrake’s zippy off-the-line performance is aided by the car’s rapid-shifting ZF eight-speed automatic and rear-biased all-wheel-drive system. Floor the throttle and the car literally leaps off the line, the engine’s 332 pound-feet of muscley torque providing a deep well of intoxicating thrust.

The XF’s Drive Control selector on the center console lets you chose between Standard, Eco, Dynamic and Rain-Ice-snow modes. Tapping Dynamic puts an instant smile on your face as the revs soar, gears are held longer, the steering gets added heft, and the suspension stiffens. This here is the appeal of a wagon over a crossover. With its lower center of gravity, and lower roofline, the Sportbrake just feels more nimble, more agile, and more eager to attack a curve. 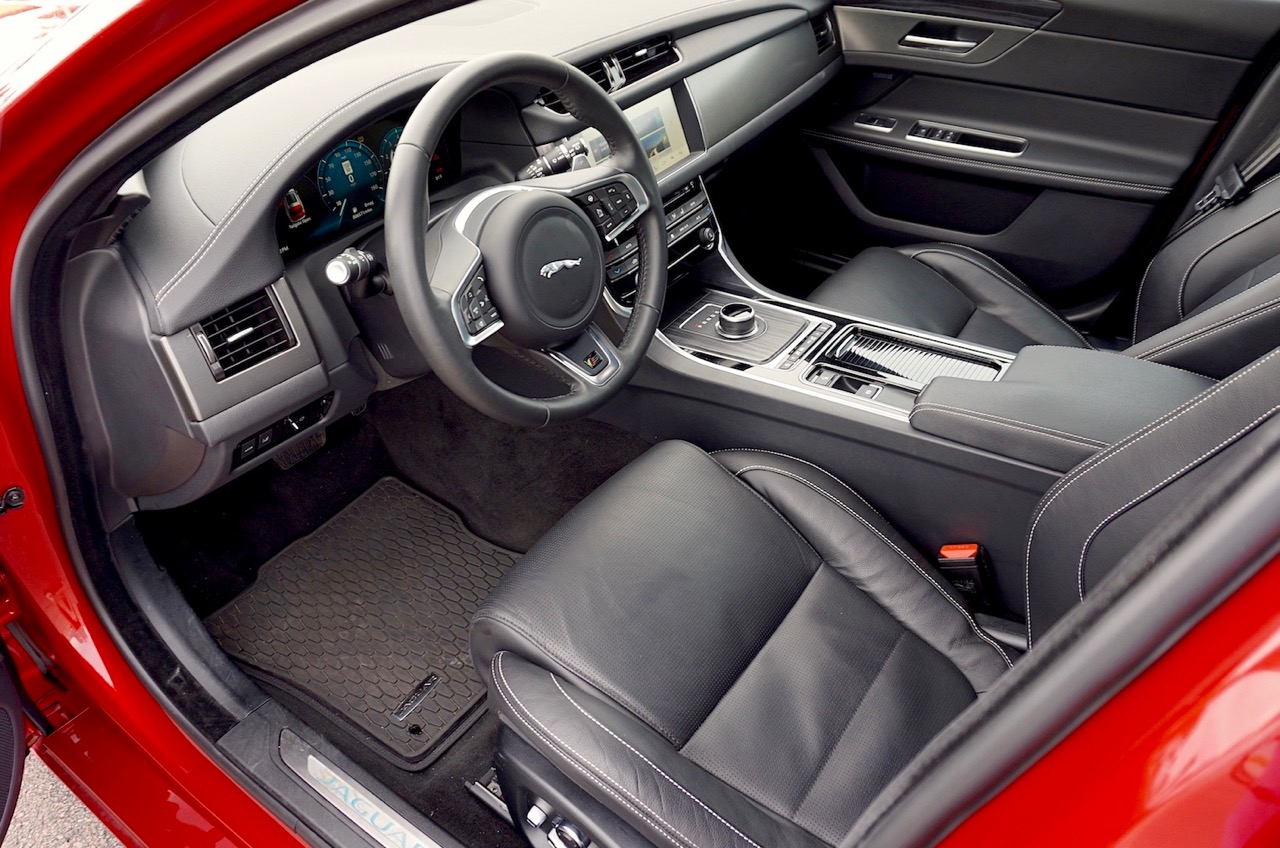 There’s a mix of good and not so good when you slide behind the Sportbrake’s chunky leather-rimmed wheel. The standard, full-length panoramic glass skylight is a terrific feature, but it’s a fixed piece of glass with no opening; you can’t even opt for a standard sliding sunroof in its place.

Visibility, or lack of it, is also an issue. The combination of that small, steeply angled rear window, thick rear roof pillars, and tall rear-seat headrests severely restrict rearward vision. Pulling out from an angled junction requires a leap of faith. 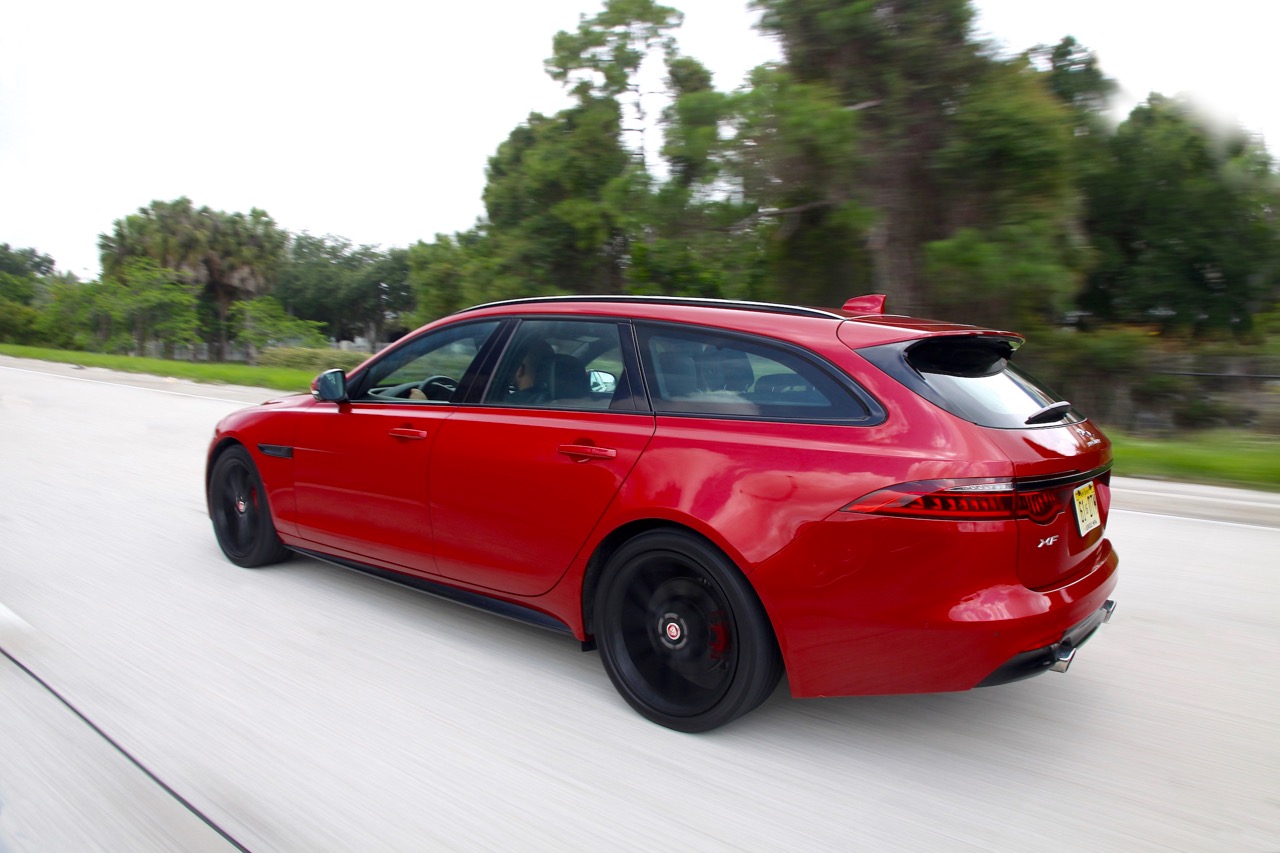 Jaguar doesn’t pretend that the XF Sportbrake will shatter any sales records; it will be sold in super-low numbers to buyers who like exclusivity, and just can’t quite stomach the thought of driving another SUV or crossover. And make no mistake; it has a lot of appeal with its supermodel styling and athletic character. Yet its biggest challenge might come, not from a Mercedes-Benz E400 4Matic (base price $64,045) or elegant Volvo V90 T6 R-Design (priced from $56,945), but from another member of the Jaguar breed – the bad-boy F-Pace SVR! 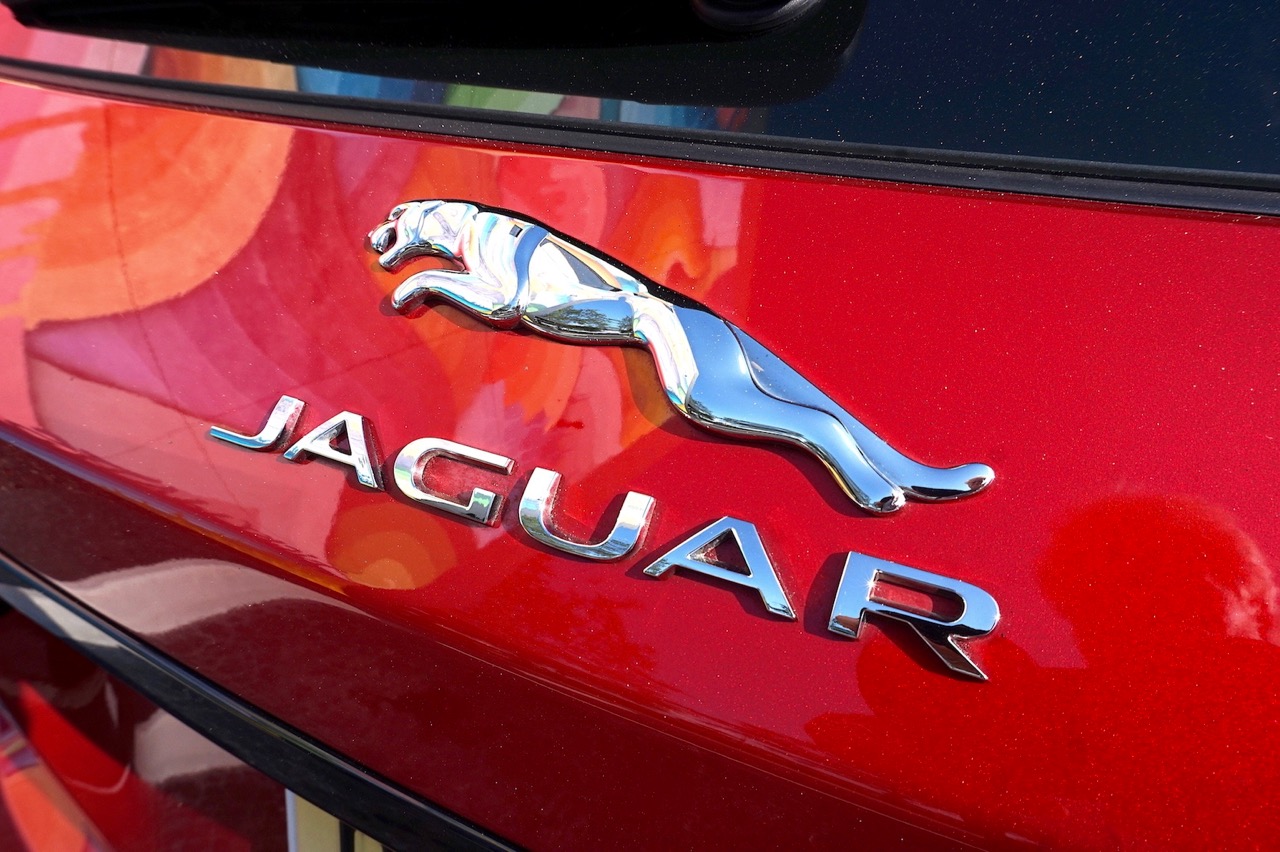 Yes, it’s a crossover, but one that packs a staggering 550-horsepower from its 5.0-liter supercharged V8 and capable of 0-to-60 mph blasts in just 4.1 seconds. And all for $80,985. Suddenly an old-school wagon might not look so cool after all.