Skip to content
A snapshot of the new Corvette Grand Sport, plus Corvette’s international racing legacy on and off the track.

Chevrolet is bringing back the Corvette Grand Sport, leveraging more than 50 years of technology transfer from the track, while incorporating the distinctive styling attributes and special-edition aura. It is also the first production model to incorporate the chassis and suspension elements of the high-performance supercharged model in addition to its wider tires and fenders. It was introduced today at the Geneva Motor Show.

Here’s a snapshot of Corvette racing history, starting in 1960: 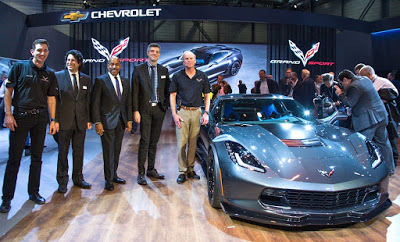 1962-1963 – Encouraged by the European success and similar victories in America, Arkus-Duntov oversaw development of the original Corvette Grand Sport racecars, which were targeted for the 1963 Le Mans race. The plan was to build at least 125 ultra-light, high-powered cars to satisfy homologation rules for the GT production class. Only five were built before a General Motors edict eliminated “factory” racing support. The Grand Sport program officially died before the car made it to Le Mans.

1963-1964 – Despite GM’s racing ban, Arkus-Duntov let the original Grand Sports slip into the hands of private racers, providing the real-world evaluation and technology transfer the gifted engineer was seeking. Roger Penske, A.J. Foyt, Jim Hall and Dick Thompson were among the racing luminaries who drove them.

1967 –Arkus-Duntov kept the spirit of the Grand Sport alive through the 1960s, with Z06 heavy-duty brake and larger fuel tank options designed to help racers take production cars from the street to the track. He also was behind the 427 cubic inch, aluminum-head L-88 big block engine program launched in 1967, which was intended to give racers a rules-legal high-horsepower advantage from the factory. It would spur a series of racing successes over the next few years.

1984 – The Z51 Performance Handling package was introduced with the launch of the C4 generation. It would become the preferred choice for owners who took their Corvette to the track. In fact, the Corvette became so dominant in SCCA Showroom Stock racing that it was banned by 1988, prompting the creation of the Corvette Challenge racing series.

1996 – Chevrolet introduced the Corvette Grand Sport special edition in the final year of the fourth generation. Only 1,000 were built – each with an Admiral Blue exterior featuring an Arctic White stripe and red hash marks on the left-front fender. Black wheels from the ZR1 model required flares for the rear fenders, and all models featured a 330-horsepower LT4 engine. Of the 1,000 built, 810 were coupes and 190 were convertibles.

1999 – Corvette Racing returned to the global stage with the fifth-generation model and the C5-R race car. After an impressive debut, the team scored its first of three GTS class wins at Le Mans in 2001. The C5-R also helped secure four consecutive ALMS team and manufacturer titles (2001-2004).

2010 – The Grand Sport was reintroduced in the C6 generation, offering design distinction with the wide chassis of the Z06 – including convertible models. It quickly became the Corvette lineup’s most popular model, accounting for more than half of sales by the close of the sixth generation in 2013.

2014 – A new Corvette generation bred the new C7.R race car. Like the previous generation, it used a production Z06 frame for its foundation, but for the first time it was built alongside the production model frames at the Bowling Green, KY., assembly plant. The C7.R won the GTE Pro class at Le Mans in 2015.

For more information about the latest Corvettes, please visit http://www.chevrolet.com/corvette-stingray/build-your-own.html