There’s an all-new A8 on the way, but it’ll be hard to beat the current version of this high-luxe limo, blogs Road Test Editor Howard Walker. 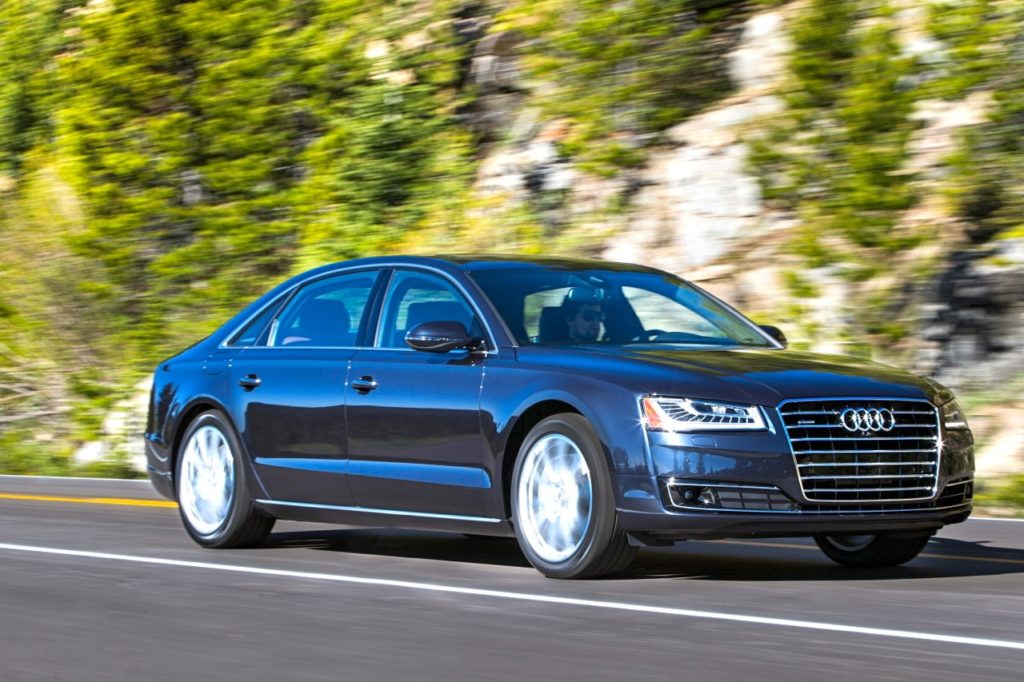 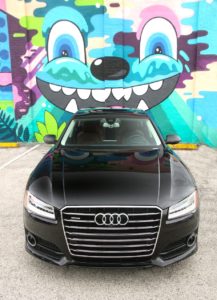 It’s no secret that Audi will be pulling the silk off an all-new A8 flagship next month. Word has it that not only will the car have a polarizing, love-it-or-hate-it new design, but it’ll pack more computing power than a Google server farm, allowing it to move one step closer to fully automated driving.

One of its multitude of ground-breaking features will be its new Traffic Jam Pilot function that’ll enable the car to legally pilot itself at speeds up to 35 mph in freeway stop-start traffic. Look Ma, no hands. Behind-the-wheel texters, tweeters and Subway foot-long sandwich-eaters, prepare to rejoice!

As someone who regularly beats his head against the dashboard trying to master the complexities of modern-day automotive technologies, the thought of an even-more complex Audi is, to me, about as thrilling as a computer virus. To ready myself for this all-new A8 however, and put its upcoming tech into perspective, I just spent a deliriously joyful week behind the wheel of the out-going A8, in this case a 2017 A8 L 3.0T quattro. 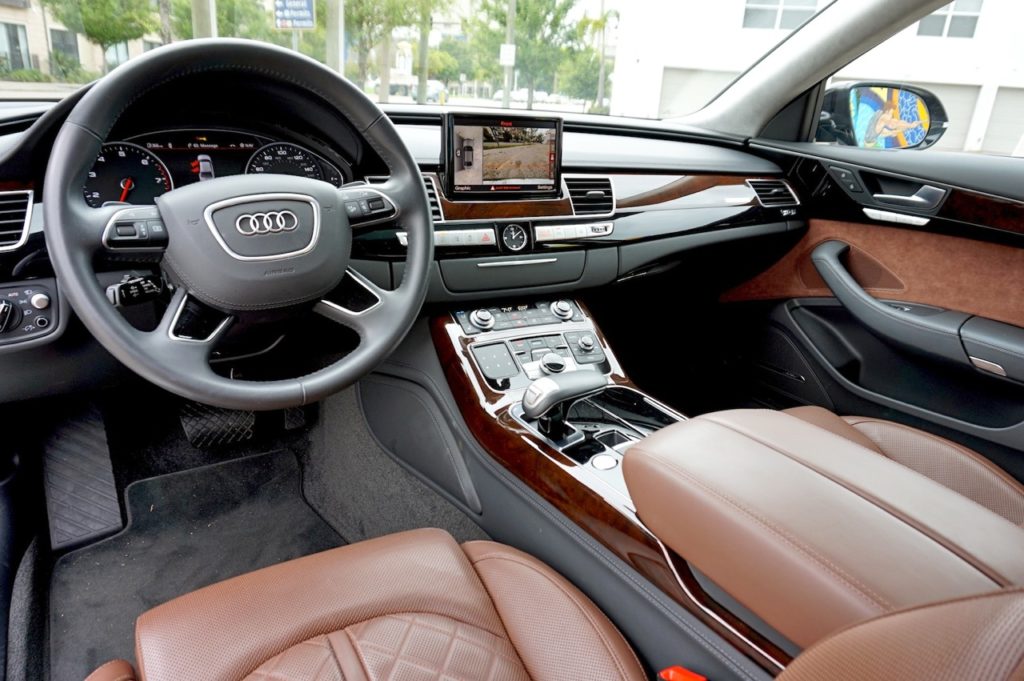 You gotta love a car that lets you enter an address into its nav system by simply scribbling it with your finger on a small touch-pad on the center console. This current version has been around since 2010, so design-wise it’s about as youthful and fresh-faced as Nick Nolte in a police mugshot!

Yet with its stretched, limo-like wheelbase, huge grille and honking 20-inch alloys, it still has a tremendous elegance and huge on-the-road gravitas. Valet parkers will fall over themselves to find a primo spot for it outside the front door. 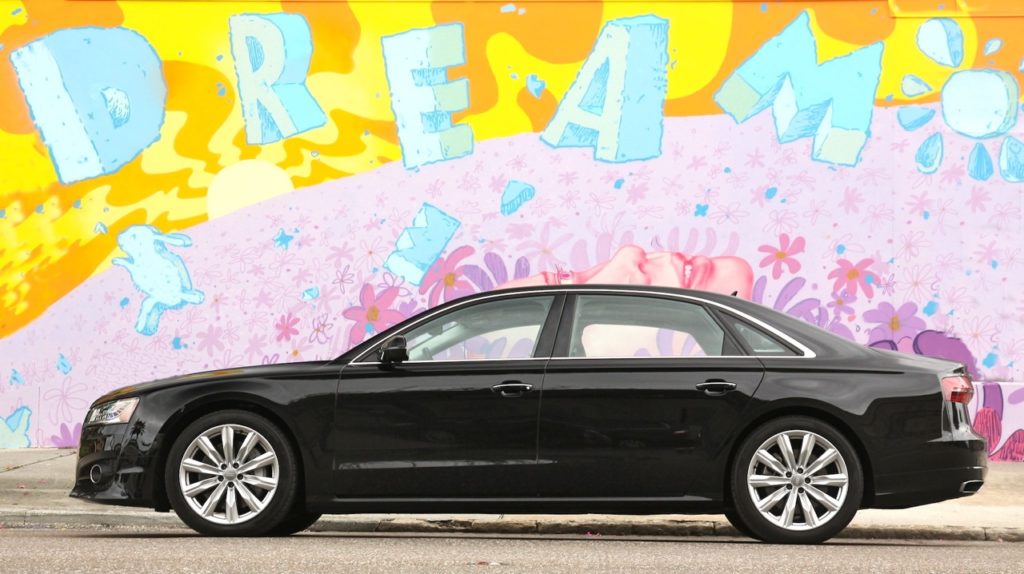 And to drive it is to love it. The A8L comes with a choice of two engines; a potent 4.0-liter twin-turbo V8 good for 450-horsepower, or a 3.0-liter supercharged V6 cranking out 333-horsepower. Want horsepower nirvana? There’s a short-wheelbase S8 Plus with a thundering 605-horsepower version of the big 4.0 V8, though that’s simply a speeding ticket waiting to happen!

Trust me, no one will be disappointed with the performance of the supercharged V6. It’s super-quiet and refined and has no shortage of muscle to punch the lightweight A8 off the line, or surge past slower traffic on a two-lane back road. Part of its eagerness is down to the A8’s magical eight-speed Tiptronic transmission. It responds instantly to calls for kickdown, and shifts from one gear to the next with all the smoothness of hot molasses flowing from a jar. 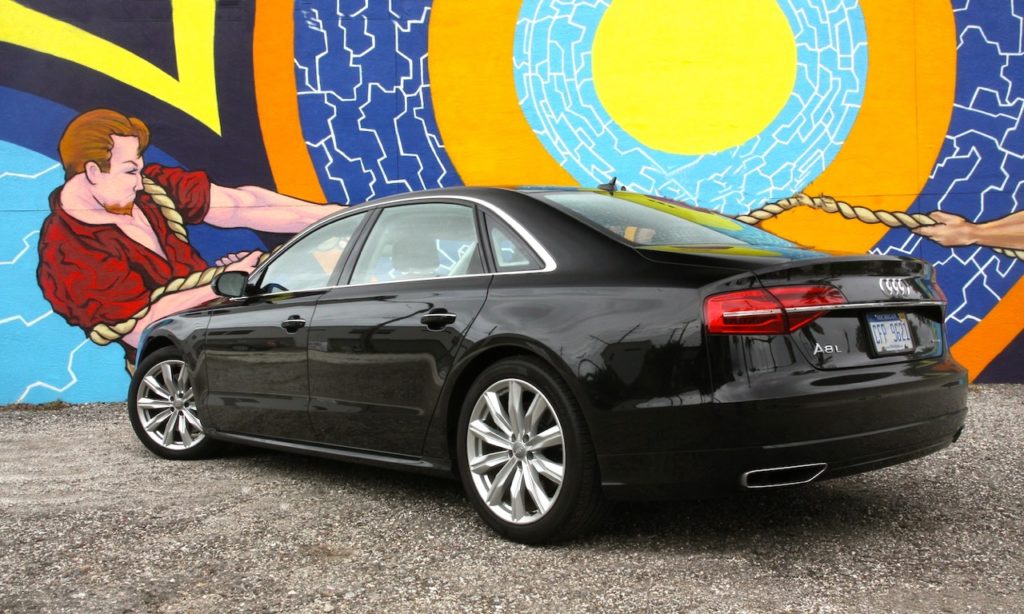 Through the curves, the car’s standard all-wheel drive quattro setup, shuffles drive between each wheel to ensure optimal traction. The feeling for the driver is one of sublime poise and balance with real agility. It’s arguably the sportiest-feeling big sedan in its class. 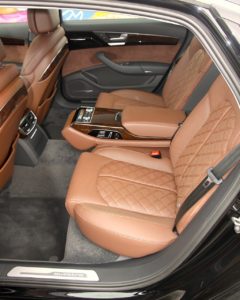 While the ride is a little on the firm side for a car so focused on delivering sublime comfort for those inside, it’s in keeping with the car’s driver-focused image. Yet who wants to drive when you can luxuriate in the car’s amazing rear seats? The A8L is five inches longer than a standard-wheelbase S8, with those extra inches going into the back to provide true stretch-out space.

I know, the analogy with biz-jets is a bit over-used, but that’s exactly what sitting in the back of an A8L feels like. Power-up the massage function, recline the rear backrest, crank-up the 630-watt Bose surround sound system, and chill.

This being the flagship of the Audi range, you’d expect quality. But the A8 goes above and beyond, with its glove-soft diamond-stitched leather, a gorgeous mix of satin-and-varnished timber, Alcantara headliner and brushed metal detailing. The base price of a 2017 model year A8L 3.0T is $82,500, but nicely-loaded you’ll pay closer to $93,000. Though I expect that with an all-new A8 landing at dealers towards the end of the year, there’ll be good deals to be had on leftovers. 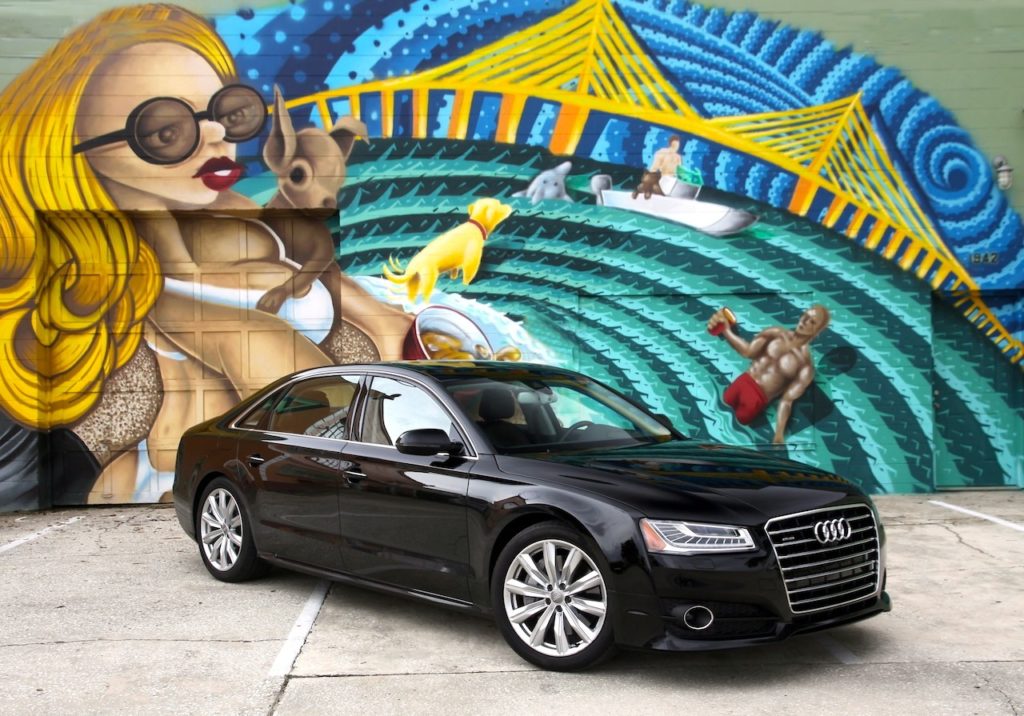 All I’d say is that the all-new A8 will have to be pretty awesome to outshine this current version.

For more information about the latest luxury-performance vehicles from Audi, please visit https://www.audiusa.com/models#