Skip to content
The bigger MINI Clubman may not be as much fun as its smaller siblings, but it’s an all-round sporty four-door with room, utility and a bit of Brit cheekiness,
blogs Dan Scanlan. 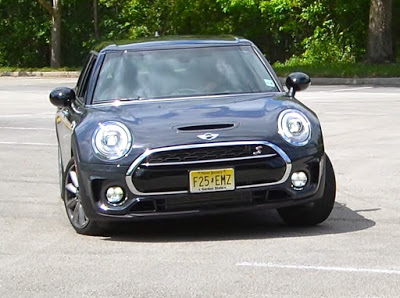 It is a question for the ages: Can a four-door MINI be as much fun as a two-door? And will a MINI Cooper S version with four doors be even more fun?

The first Mini in 1959 started out as a tiny and economical family car, until people found out how much fun it was to play with. Then racecar maker John Cooper saw the potential and juiced the little car’s suspension and engine. But they were still tiny coupes until a ten-inch-longer Clubman Estate arrived atop a four-inch-longer wheelbase.

Now as the new MINI (reborn in 2001) enters its third generation, the past becomes the present as the BMW-owned company offers a genuine four-door MINI that’s longer than the already five-inch-longer ‘16 MINI two-door. And it’s called – you guessed it – the Clubman.
The MINI Clubman was offered in the second (2007-2013) generation with a third half-door and side-hinged rear barn doors. The longer Gen-3 Clubman keeps the barn doors in back, and gains two rear side doors plus two new turbocharged engines – a 134-horsepower 1.5-liter/3-cylinder and our Cooper Clubman S’s 2-liter, 189-horsepower four-cylinder engine. 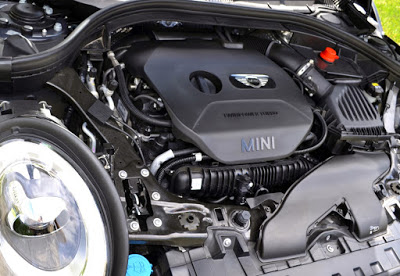 Our test car had an eight-speed Steptronic transmission with shift paddles on the steering wheel. The engine offered MID, SPORT or GREEN driving modes. GREEN noticeably damped throttle input, held gears longer, reduced a/c and engaged a coasting mode when we backed off the gas. The MID mode was transparent, allowing the engine to play, with plenty of power. SPORT was my favorite on our 6,000-mile-old test car.

Tap the eight-speed automatic into its Sport mode and the MINI Clubman offered its turbo boost almost immediately, the exhaust snarling as we hit 60 mph in 6.4 seconds with a hint of torque steer and turbo wastegate chirruping. The exhaust popped as we backed off. Sport mode saw the automatic shift quicker in the power range. We had launch control. 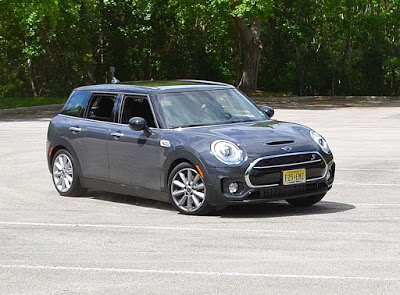 Set transmission and engine in Sport, hold the stability button down to shut most of it off, then gas it as you hold the brake. Release the brake and the Clubman hit 60-mph with barely controlled front wheelspin in 5.9 seconds. The 2015 MINI Cooper John Cooper Works 3-door we tested last year with 228-horsepower and six-speed manual hit 60-mph in the same 5.9 seconds. Gas mileage in fuel-saving mode that shut down the engine at stoplights realized an indicated 27-mpg.

So is a longer MINI less fun? Not really – maybe a bit more mature? Our Clubman had a one-link drive strut front and central pivot rear axle with more rigid steel wishbones. With a longer wheelbase, the ride was supple yet just firm enough. Sure, it’s lost some of the go kart-like ability of the first MINI Cooper S of 2000, but it had a level of fun that loved to be driven hard, tightly controlled over bumps, yet not harsh on rebound.

The MINI Clubman still offered some serious fun on winding roads, if just not as precise as a three-door. It would lean a bit in a turn, then take a set and carve its way through. We had some progressive understeer in turns, tunable by throttle but always there when pushed. The electromechanical power steering was very direct with great feel. The disc brakes also offered precise pedal travel and bite and stopped us very well with no sign of fade after repeated hard stops from 60-mph. 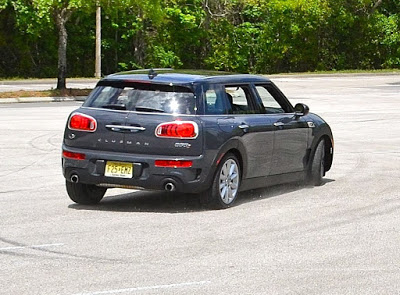 As for looks, the Clubman gets up-sized almost 11 inches, widened 2.9 inches and given four more inches of wheelbase plus four real doors. This comes atop the MINI Hardtop 2-door’s redesign, with a longer, taller nose and familiar chrome-trimmed oval headlights with LED main beams and light rings. In between, a fake Cooper S hood scoop along with a larger oval chrome-trimmed grill, then slim upper and lower grilles and a lower air dam with brake ducts. Outboard of LED fog lights are new vertical Air Curtain ducts to channel air along the front wheels and out new vents at the back of the front wheel arch trim. 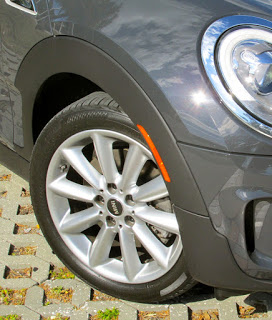 The black front and rear wheel arches frame 10-spoke silver alloy wheels wearing 17-inch Bridgestone Turanza rubber.  While the MINI Clubman looks like a regular 2-door from the front, walk around and the added length is apparent, if well designed. The wheel arch black trim continues as a wide lower sill accent. The black roofline still looks low thanks to a high beltline, with four gloss black window pillars instead of three. Our MINI Clubman’s subtle gray metallic made it look almost Q-Ship. And while it looked balanced from the front three-quarter view, it didn’t look as svelte from the rear angle. 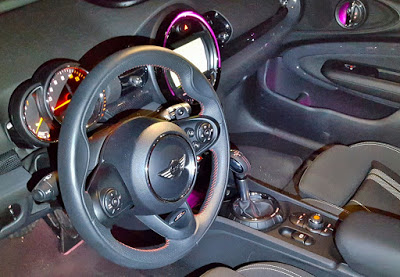 The screen also displays the engine mode, backup and parking sensors, plus a silly “Driving Excitement” horsepower and torque display. It is all controlled by a simple twist and tap controller on the center console.  Almost everything you do causes that light ring to glow – purple when the engine is running, green when you select the economical “GREEN” engine setting, yellow for “MID,” or red for “SPORT”. Adjust volume, and it flashes. Back up and it blinks red as the screen’s animated graphic shows the rear sensors at work. It’s all a bit cartoonish. Nostalgic toggle switches for the engine start/stop economy feature and stability control flank a throbbing red start/stop engine switch. 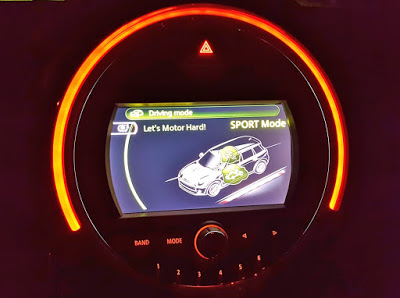 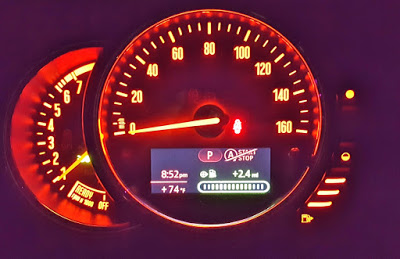 That sporty John Cooper Works three-spoke wheel gets stereo, voice command and telephone controls on the right, cruise controls on the left, and a thick leather-clad black leather rim with neat red stitching.  The back seats really benefit from the wheelbase stretch and new rear doors that open wide. I had to duck a bit to get under the low doortop, but once there, there’s decent head and leg room for two real adults. The rear seatbacks split 60/40 and fold to expand a 17.5-sq.ft. luggage compartment to 47.9. The split rear doors pop open with a tug on chrome handles, or wave a foot under the rear bumper and they pop hands-free. 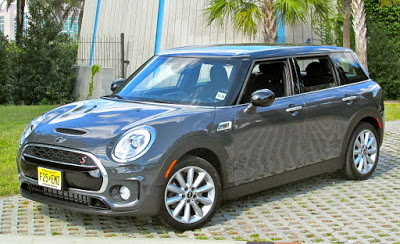 For more information about the latest from MINI, please visit http://www.miniusa.com/content/miniusa/en.html