Skip to content
The aero-inspired RC-F wears Lexus’ angriest face yet and has the horsepower to back it up, blogs Dan Scanlan. 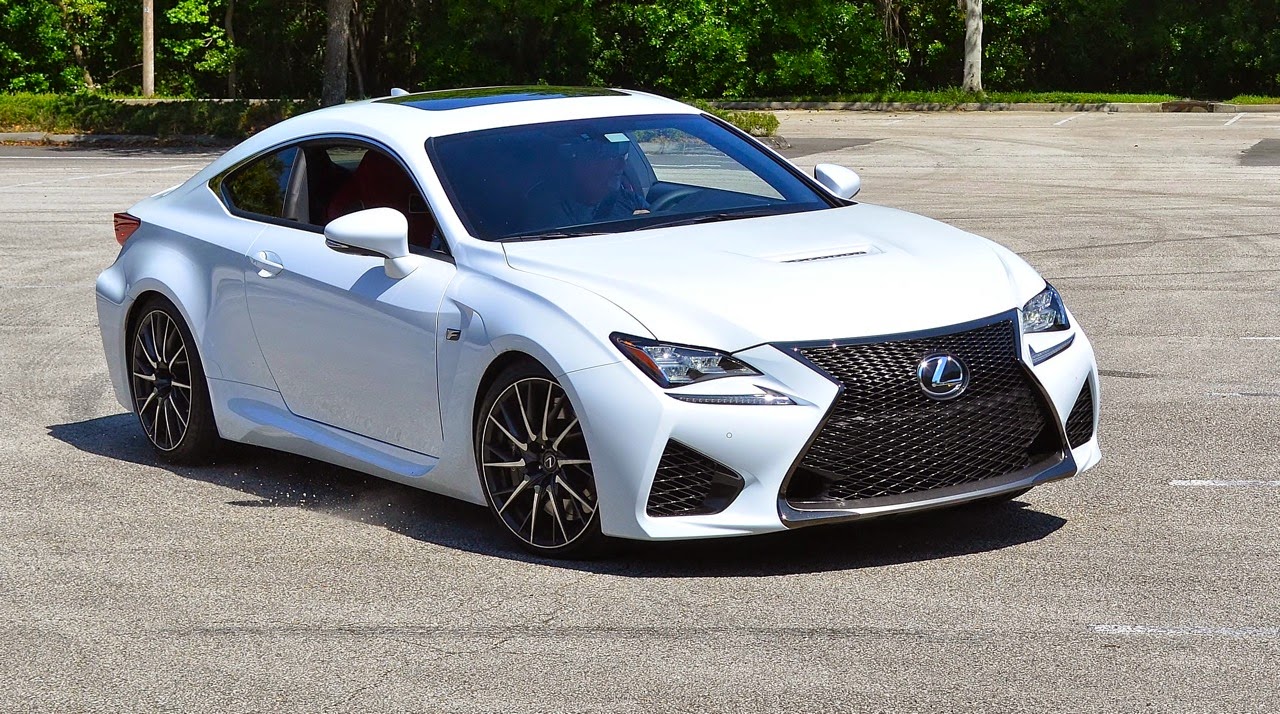 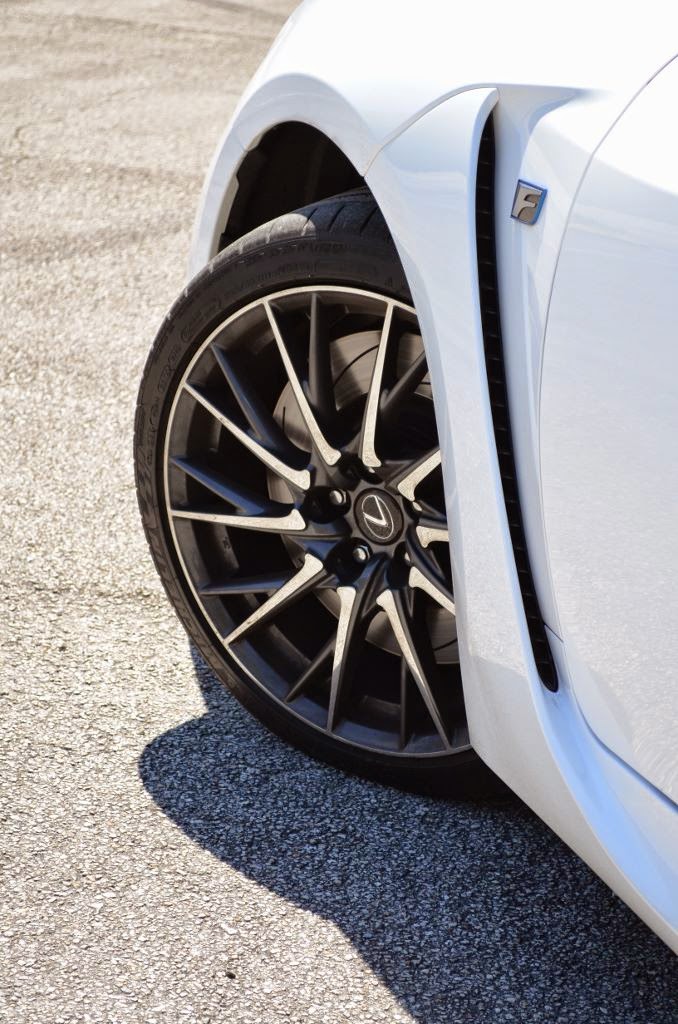 The “F” stands for Fuji Speedway, where Lexus conducts high-speed testing and development. And with 467 horsepower available, some straight roads became speedways when we let the RC-F howl.

We thought the IS-F was the king of the Fs with its 5-liter V-8’s 416 horsepower, a bellowing basso exhaust note over 3,500-rpm, then 60-mph in 4.8 seconds and 100-mph in 10.8 seconds. Then we checked out the RC-F’s 467 horsepower engine with its bright blue intakes and bracing struts, backed by a close-ratio eight-speed transmission. It just isn’t a lightly reworked IS-F. There are new cylinder heads, higher compression and lighter internal parts, titanium valves, forged connecting rods, an air-cooled oil cooler, new or redesigned cylinder heads and cam covers and more.

The RC-F offers five choices of driving style. ECO dumbs down the throttle, the V-8 running on an Atkinson cycle. It leaves the suspension alone, and driving in this mode let us see about 18-mpg on premium. Set it in NORMAL and you get a bit quicker shifting in the transmission, but the RC-F remains a comfortable quick luxury coupe. Set it in SPORT S, and the shifts speed up as the transmission stays in a lower gear so there’s quicker moves when needed. But set it in SPORT S+, and you get razor sharp shifts, plus quicker downshifts. It automatically downshifts during hard braking for a corner with an audibly enjoyable engine blip and snarl. Then it holds that lower gear through the corner for greater control, and greater power on corner exit. EXPERT mode coordinates powertrain, ABS, steering, traction and stability control systems, allowing us to spin the rears through second gear launch until it all hooks up. Stability control intervenes in EXPERT if the tail starts to spin. 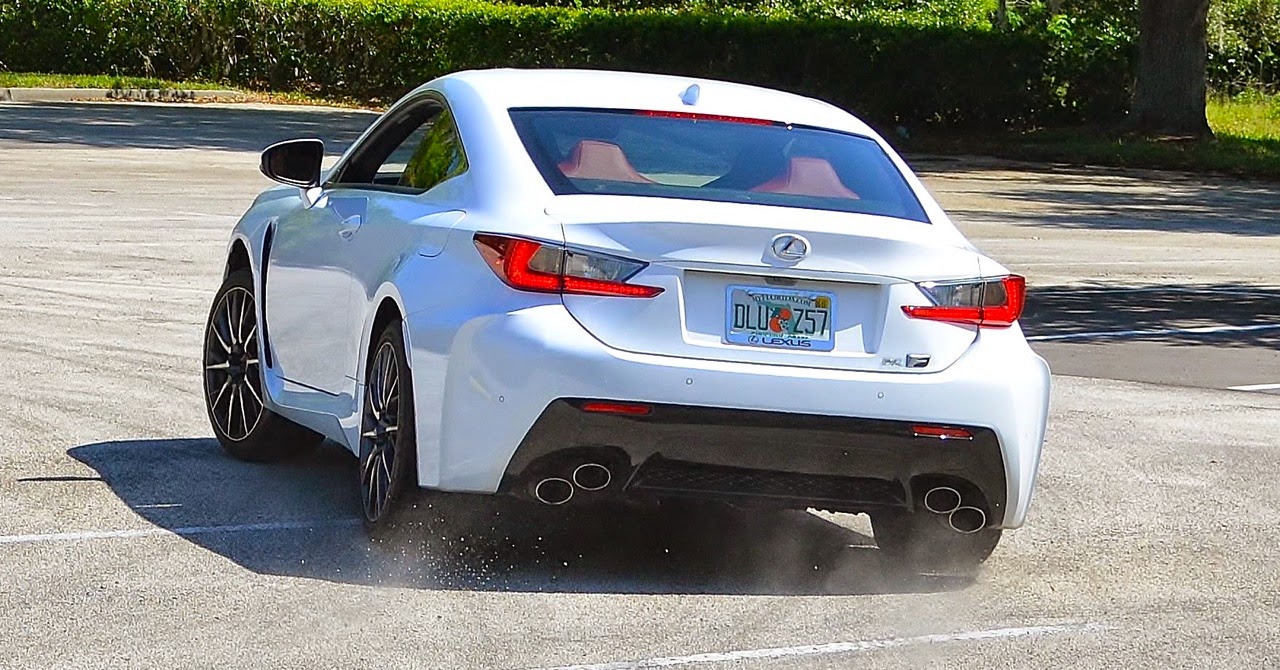 The result is a screaming launch to 60 mph in 4.2 seconds, with 100 mph in 9.6 seconds! The g-force meter claims up to .7 Gs at full launch! Active Sound Control in SPORT S+ listens to engine sounds and generates augmented sound, a higher-pitched note that blends with the engine’s mechanical sounds. Above 6,000 rpm, it screams. 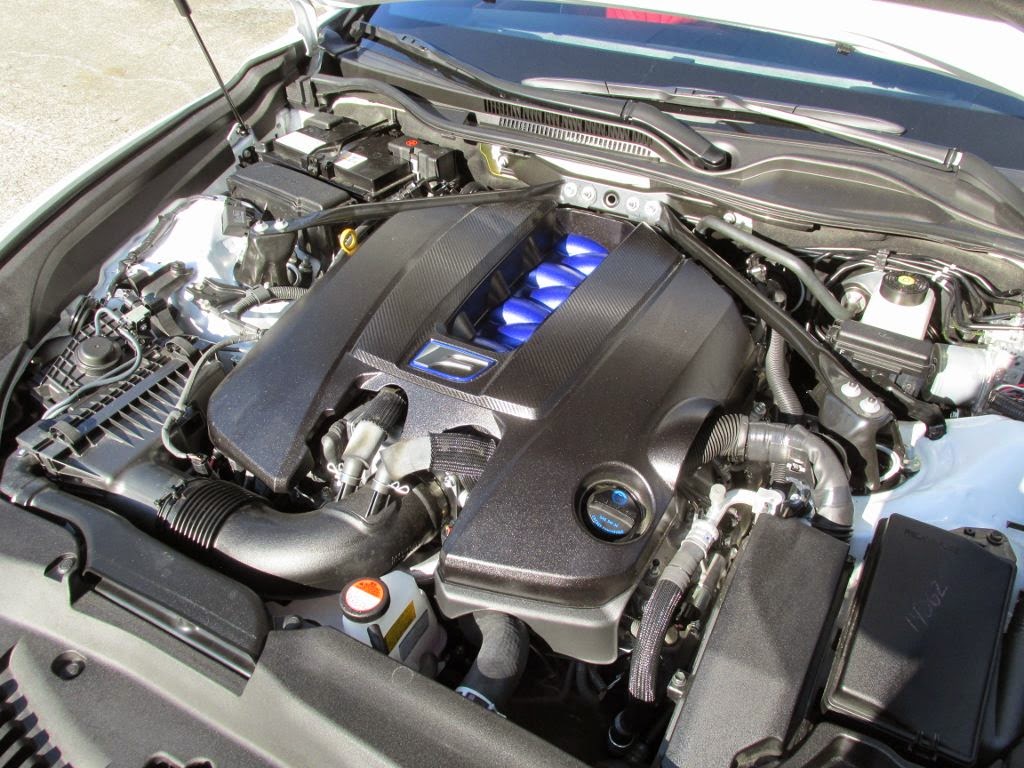 With 70 percent of the RC F’s double-wishbone front and multi-link rear suspension parts new compared to the RC, the RC-F just puts the power down and was confident in curves. The ride in NORMAL and ECO is comfortable but tightly controlled, swallowing bumps quickly. Switch to SPORT S+ and it firms up, with expansion joints causing a bit of head-bobbing, but it never crashed or thudded over bumps. Toss it into a curve and it just hangs in, the tail staying planted as we power out. It can be nice and neutral or toss a bit of tail out if you add some throttle, but it’s driver controllable with a flick of the wheel. Its Torsen limited slip differential controls the left-right speed differential to maintain straight-line stability.

You can let it all hang out in this coupe and it doesn’t hang you out to dry, so good is its grip, feedback and power. On the skidpad, the g-force meter claimed 1.5 Gs as we circled flat, with just a hint of throttle-controllable tail out. That said, its steering isn’t as razor sharp in feedback as some, but that’s OK. With 15-inch diameter slotted front rotors and six-piston calipers, and 13.6-inch ventilated rotors with four-piston calipers, our 3,000-mile-old coupe had precise brake feel and quick initial bite, controllable and capable of fade-free short stops time and time again. We pulled a negative 1.2Gs at full braking from 100 mph!

Lexus radically sportified its formula in 2007 when it unveiled its IS-F sedan, then 553-horsepower V-10 LFA sports. But that was just the start. Lexus opted to do an F coupe. But instead of just planting a fastback two-door body on the IS sedan, engineers started from scratch. The RC’s front section is based on the GS, while the center is the stiff floor section of the IS-C convertible, then the aft end is based on the IS sedan. The result is a very sleek RC coupe with slit headlights, a pointed spindle grill and some neat aero accents. The RC-F is .2 inches wider and .4 inches and .2 inches (5 mm) lower. 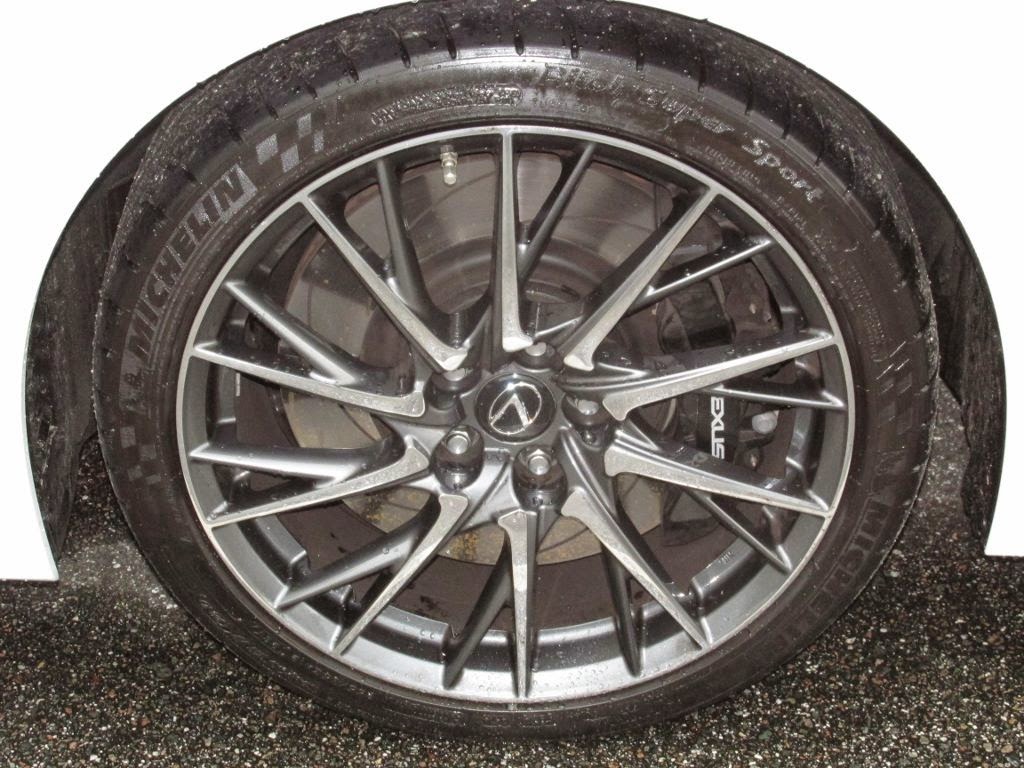 It starts with a more menacing spindle grille done in a metallic pewter mesh. The hood gets a rounded bulge just above the grille to clear the V-8, plus a meshed vent for cooling. Wide brake cooling intakes complete the face. Wider side fenders frame 20-spoke alloy wheels with 10 pointed chrome spokes wearing P255/35ZR19-inch Michelin Pilots up front and P275/35ZR19s in back. Lots of folks commented on the huge brakes with “LEXUS” badged calipers. 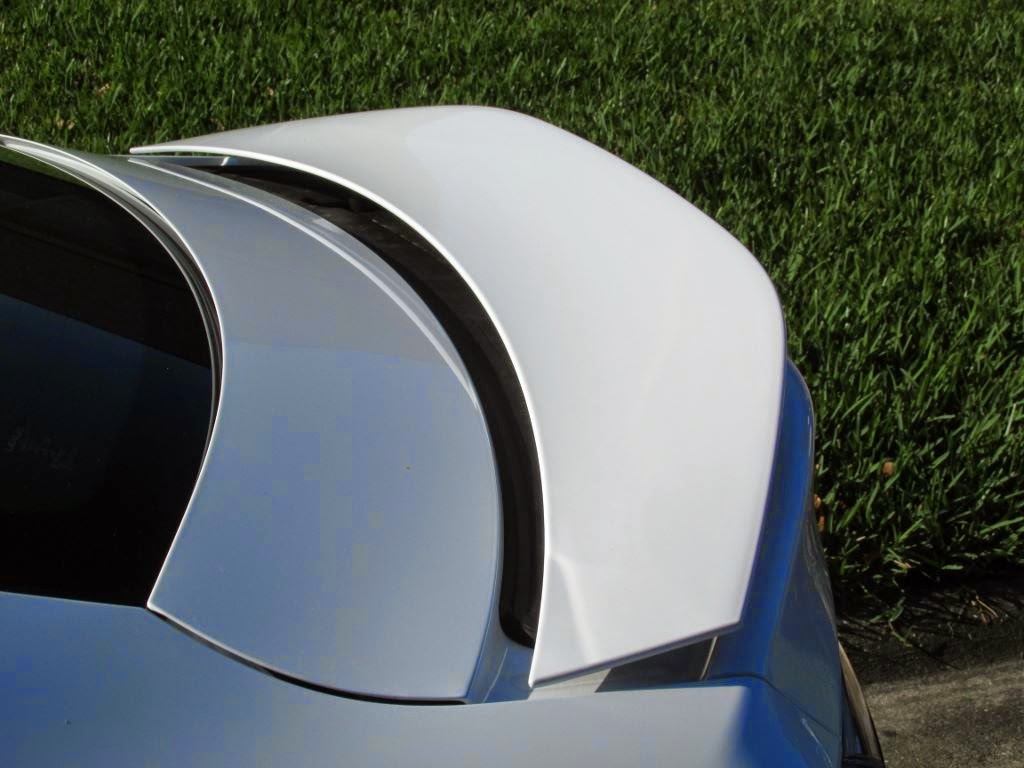 There’s a functional slit heat vent aft of the wheel well, its edgy line flowing into a wider lower sill. The coupe’s roofline is low, the fastback rear window ending in a short deck with a power spoiler that comes up at speeds over 50 mph. The black lower rear fascia has stacked exhaust tailpipes that look cool and sound great.

High-back bordello-red leather bucket seats with intricate stitching greet you. They were very comfortable and body- hugging, designed for track side support in cornering, Lexus says. Then there was the red-stitched Alcantara suede on armrests and the gauge hood, with real carbon fiber on doors and passenger dashboard. 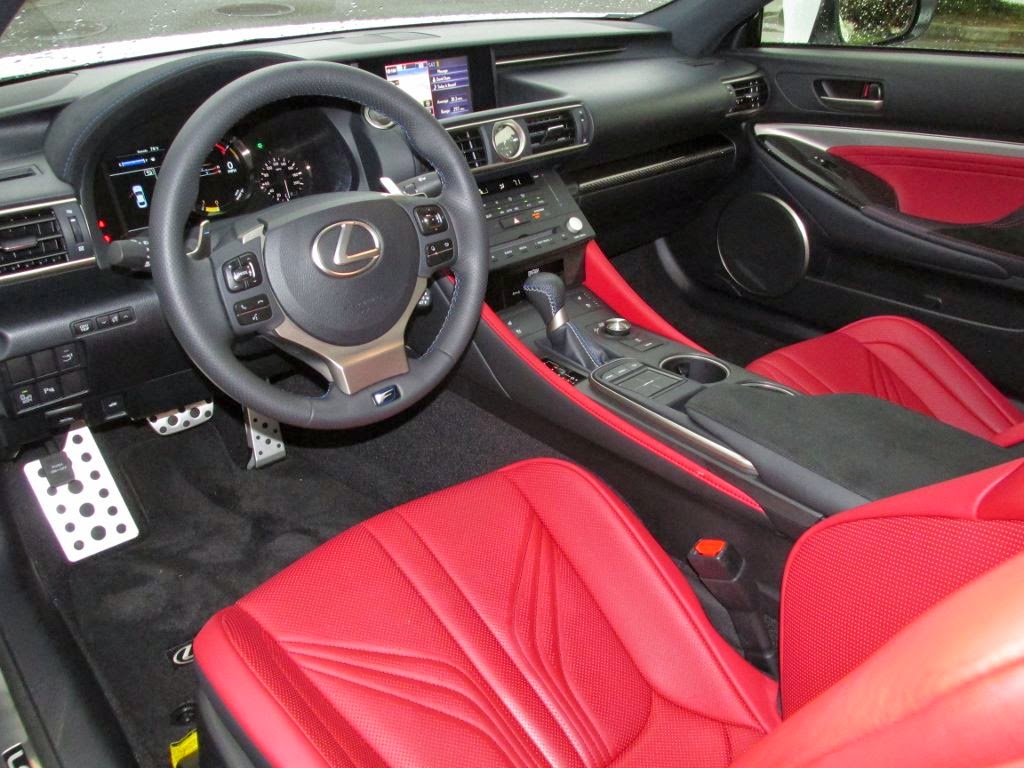 That small diameter three-spoke steering wheel has a thick padded and stitched leather rim with smallish paddle shifters. The big central multi-information TFT display is rimmed in machined alloy, morphing into a 9,000-rpm tachometer with gear position, digital speedometer and various other info displayed depending on how you set it up. To the right, there’s a smaller analog 200-mph speedometer. To the left, a multi-function trip computer shows stereo, G-force, lap timer, torque distribution, tire pressures, active rear wing status or other info depending on driving mode (Eco, Normal, Sport S and Sport S+). An rpm indicator uses indicator lights in three stages along the ring — yellow, orange, and red. In SPORT S+, the dial is replaced by a bar-type tachometer with vehicle speed and shift position as well as water temperature and oil temperature. The dash center has a high navigation screen that showcases trip or audio information, weather radar, music apps and other info. Below, a classic analog clock in the center dash, then a familiar-looking panel for dual-zone climate and basic stereo controls. 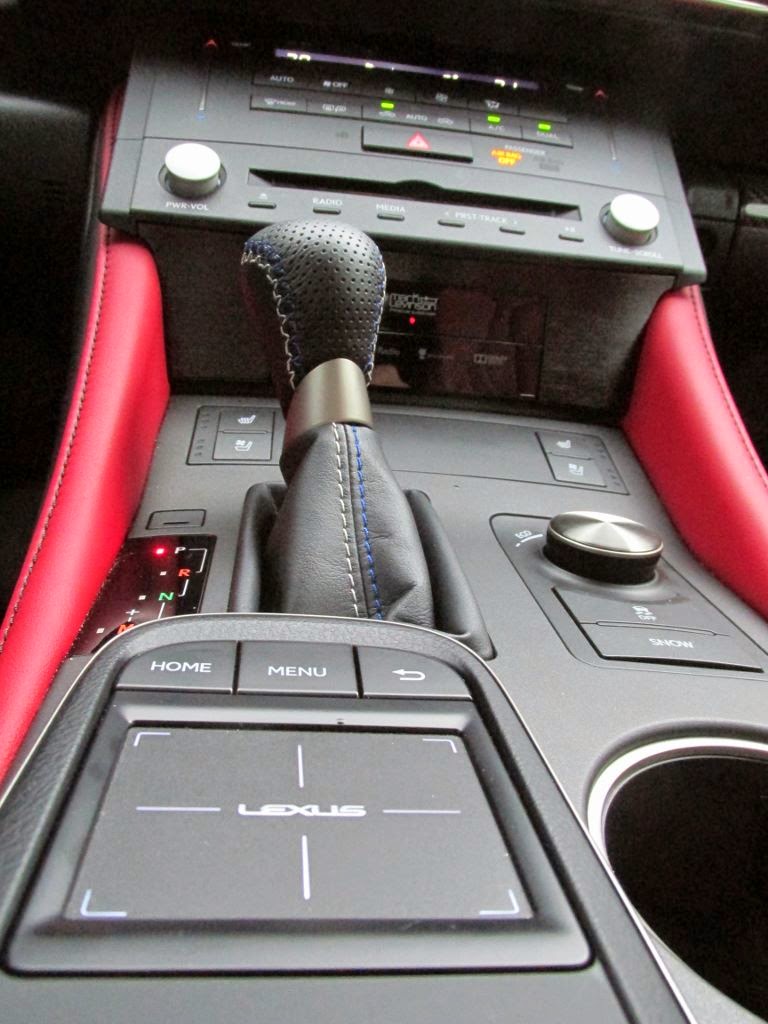 The eight-speed gear shifter gets blue and white stitching and a machined alloy knob. The next-gen Lexus Remote Touch Interface is a black touchpad. The Mark Levinson 17-speaker/835-watt AM-FM-CD-SiriusXM sound system rocked. There are rear seats with a cool stitched pattern. But the lack of legroom means it’s only for kids. The rear seatback doesn’t fold. And that trunk is small but wide at 10.1-cu.ft.

The bottom line: the RC-F is fast, precise and packaged in a wild wedge without the hard edge you’d expect. For more information about the RC-F and the latest models from Lexus, please visit  http://www.lexus.com/models