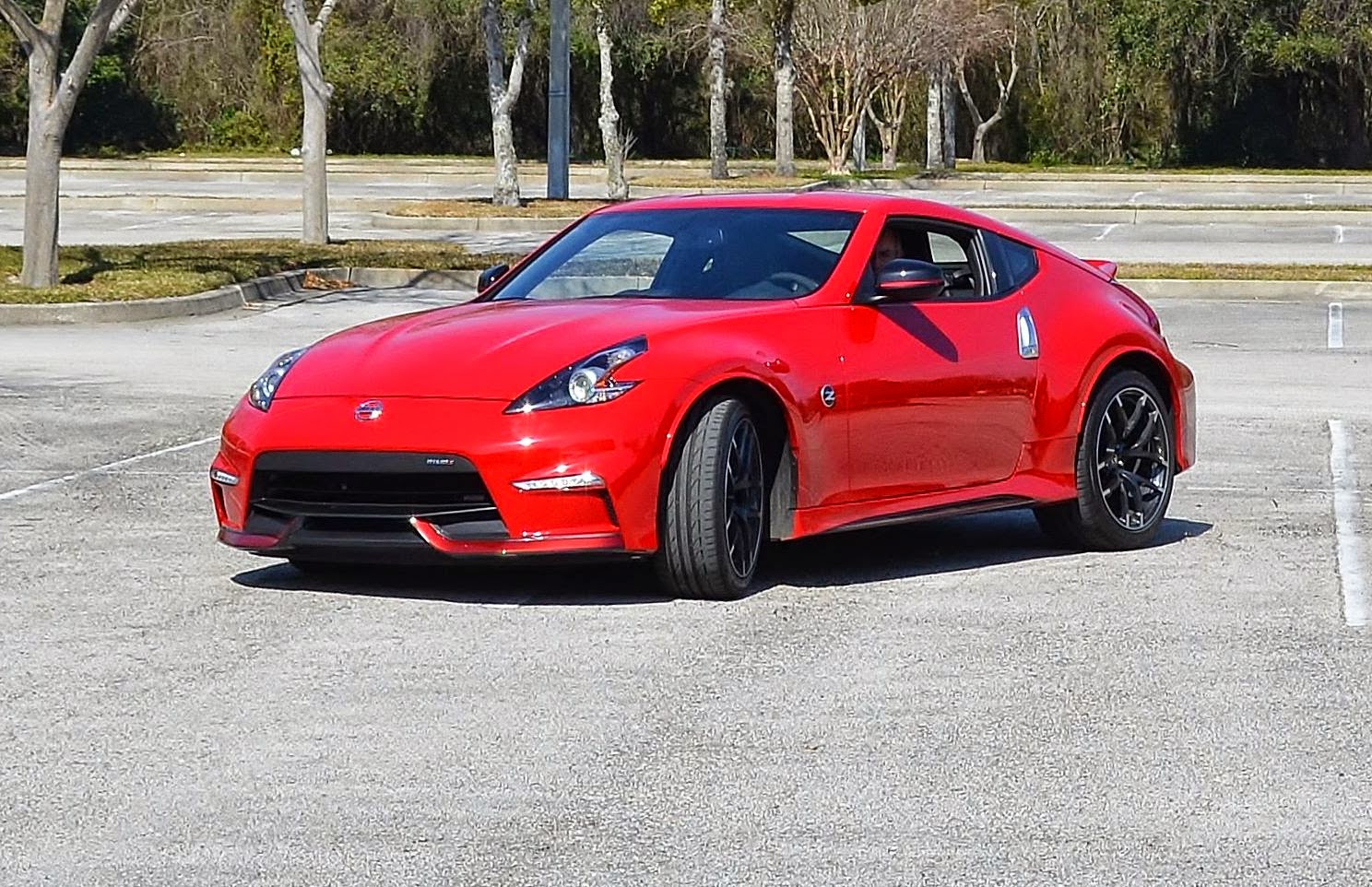 It was a good news/bad news kind of test. First, I got a ‘15 Nissan 370Z NISMO Coupe the same day that they released info on the new NISMO Roadster Concept before its debut at the 2015 Chicago Auto Show. The radical roadster is no surprise since the current iteration of the iconic Z dates back to 2009, and the test coupe looked and drove like the roadster will if it’s made.

The bad news? Yutaka “Mr. K” Katayama, once head of Nissan U.S.A. and the “Father of the Z” since he pushed for the first 240Z to come stateside in 1970, died as I was testing its great-grandson six times over. The best way to cheer and tear is drive a sports car,so I did. 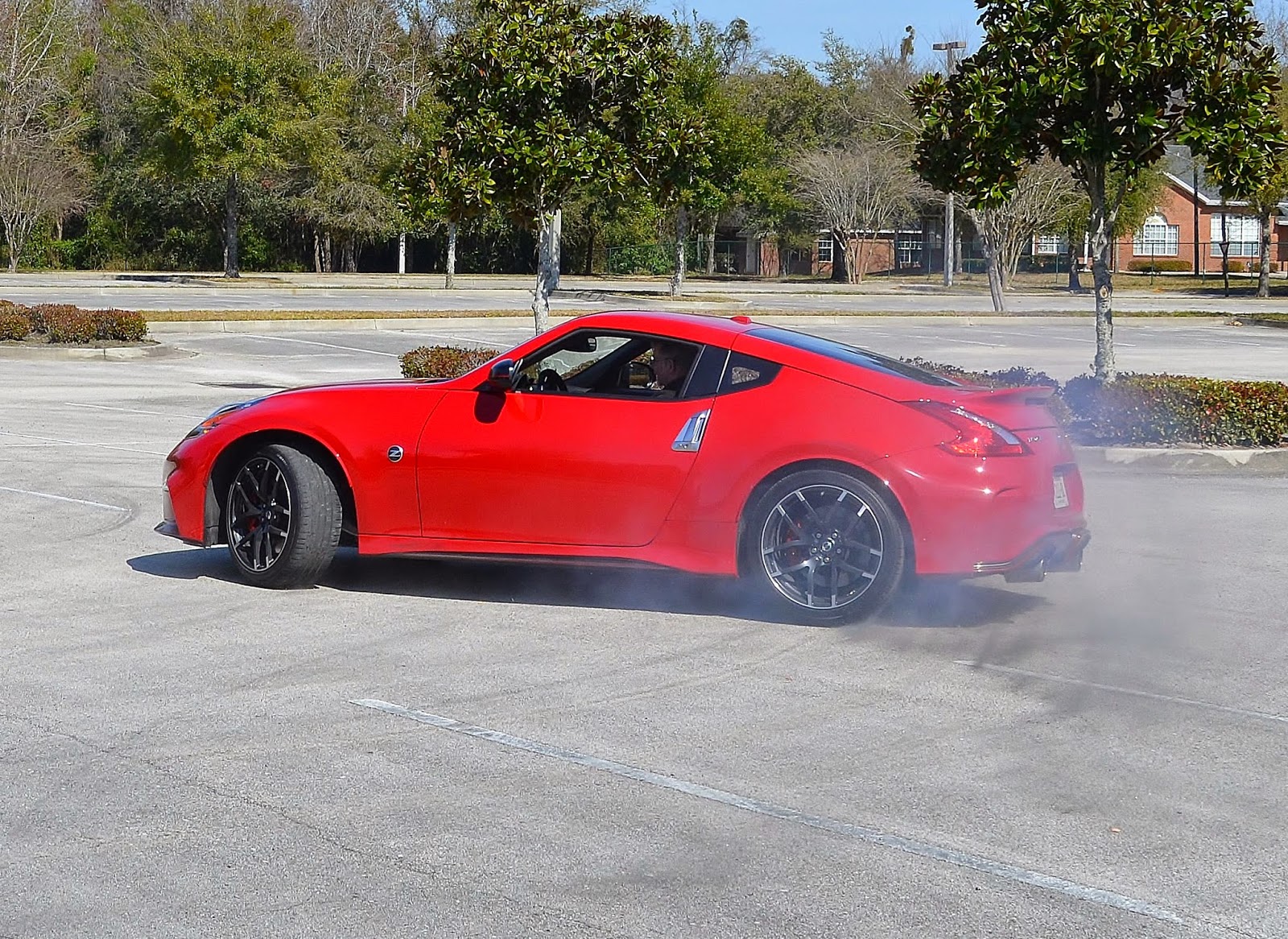 The first 240Z was born in 1970 as a lightweight two-seat sports car, then bloomed into a heavy luxury GT by the time its fourth-generation was put to rest in 1996. Then Nissan remembered what its fans liked and the revived ‘02 350Z was a lighter, tighter coupe. And with Nissan’s strong racing side, NISMO (Nissan Motorsports) become a part of the Z, our test coupe its third modified model since the car’s rebirth in 2002.

Third time’s the charm with some GT-R-inspired aerodynamic body pieces better integrated into the overall body shape than the last version. The most notable change is the loss of the last-gen’s three-inch-longer drooped snout and tall vision-robbing tail spoiler. That means 170.5-inches-long vs. the ‘14 model’s 173.4 inches, yet still 3 inches longer overall than a standard 2015 370Z. 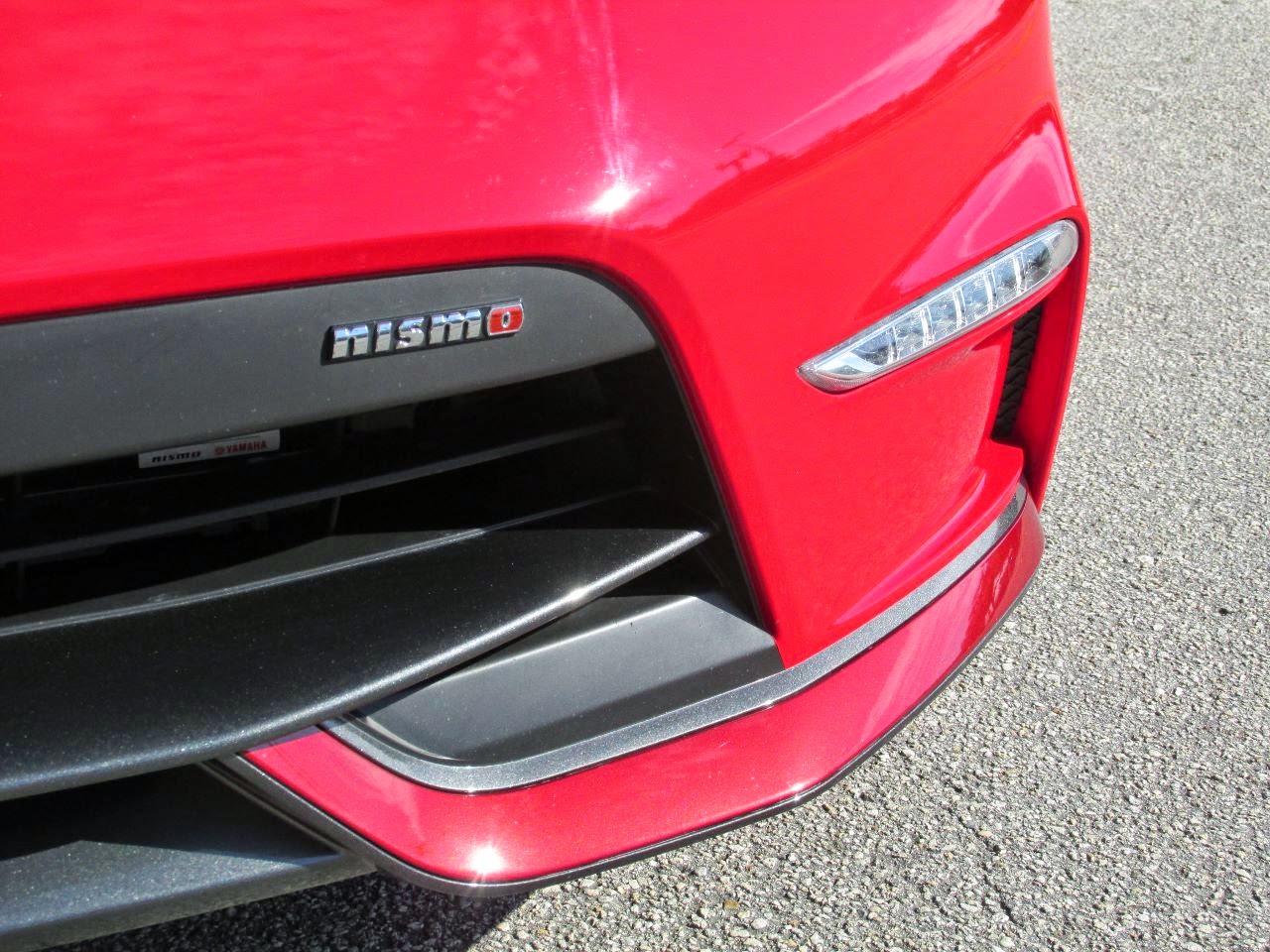 The new nose gets a wide black-edged center intake with NISMO name proud in chrome and a lower intake flanked by red-accented winglets. The side intakes get LED DRL strips over the lower winglet, while slashed headlights have black bezels. The coupe’s smoothly-rounded flanks and neatly flared fenders remain with slim lip extensions. They frame redesigned black and brushed alloy 10-spoke lightweight forged aluminum wheels that show red calipers.

The car sits on low-profile Bridgestone Potenza S001 P245/40R19-inch front and wider P285/35R19-inch rear tires. In back, a more subtle spoiler at the base of the fastback window. The rear fascia gets deeper, wider side vents and a redesigned lower fascia with red accents that frame big twin exhaust tips. Other NISMO touches include metallic black side mirrors with red stripes and signature NISMO red stripe accents. 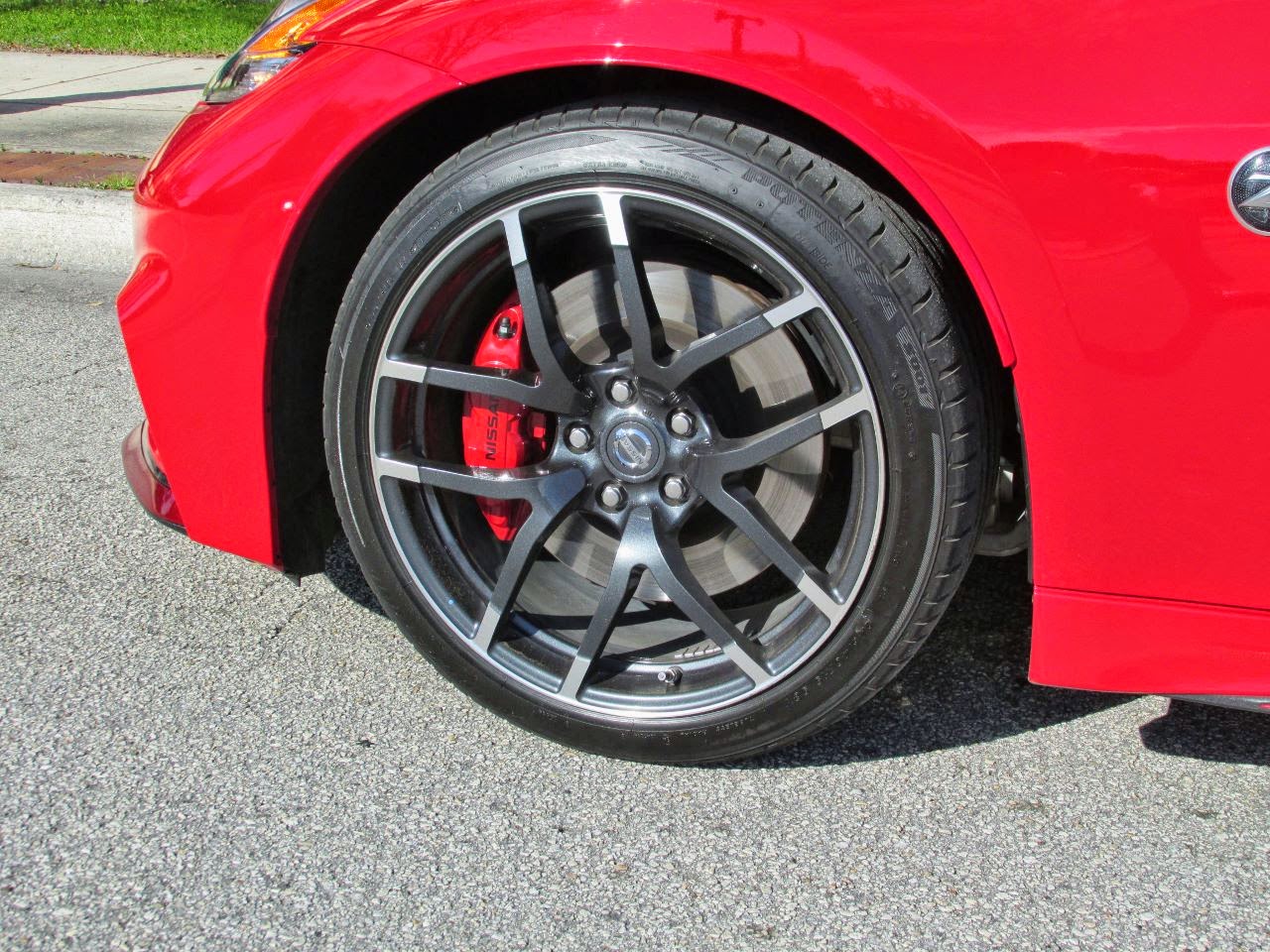 The six-year-old cockpit design remains basically the same, but with body-hugging and comfortable Recaro bucket seats with leather bolsters, red Alcantara centers and NISMO accents above the cut-outs for shoulder belts. This is a driver’s space done in black, focused on the fat leather- and suede-clad steering wheel. It tilts up and down with the main orange-lit gauge package, but I wish it telescoped. You get a central 9,000-rpm tach with inset digital gear indicator, and a 180-mph speedometer with inset orange LED odometer/trip meter on the right. The old-fashioned orange dot gas gauge washes out in sun and is hard to read. 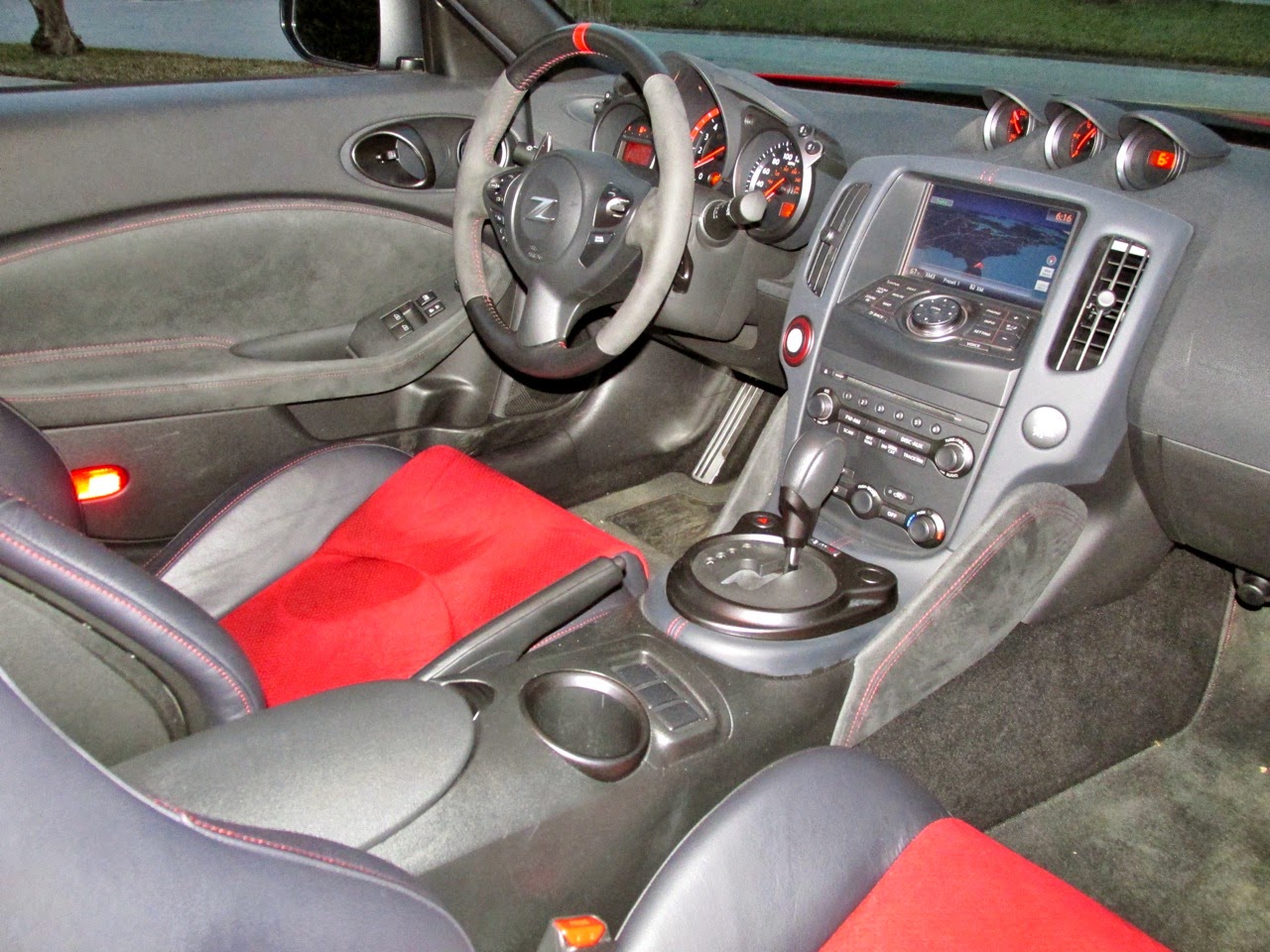 The soul of a Z has always been its engine, and the NISMO’s is a 350-horsepower/3.7-liter DOHC V-6 with Variable Valve Event and Lift Control (VVEL). The NISMO Z gains 18-hp over the base Z’s 332-horsepower thanks to an H-configured exhaust design with new muffler tuning and engine calibration. Torque is rated at 276 pound-feet. 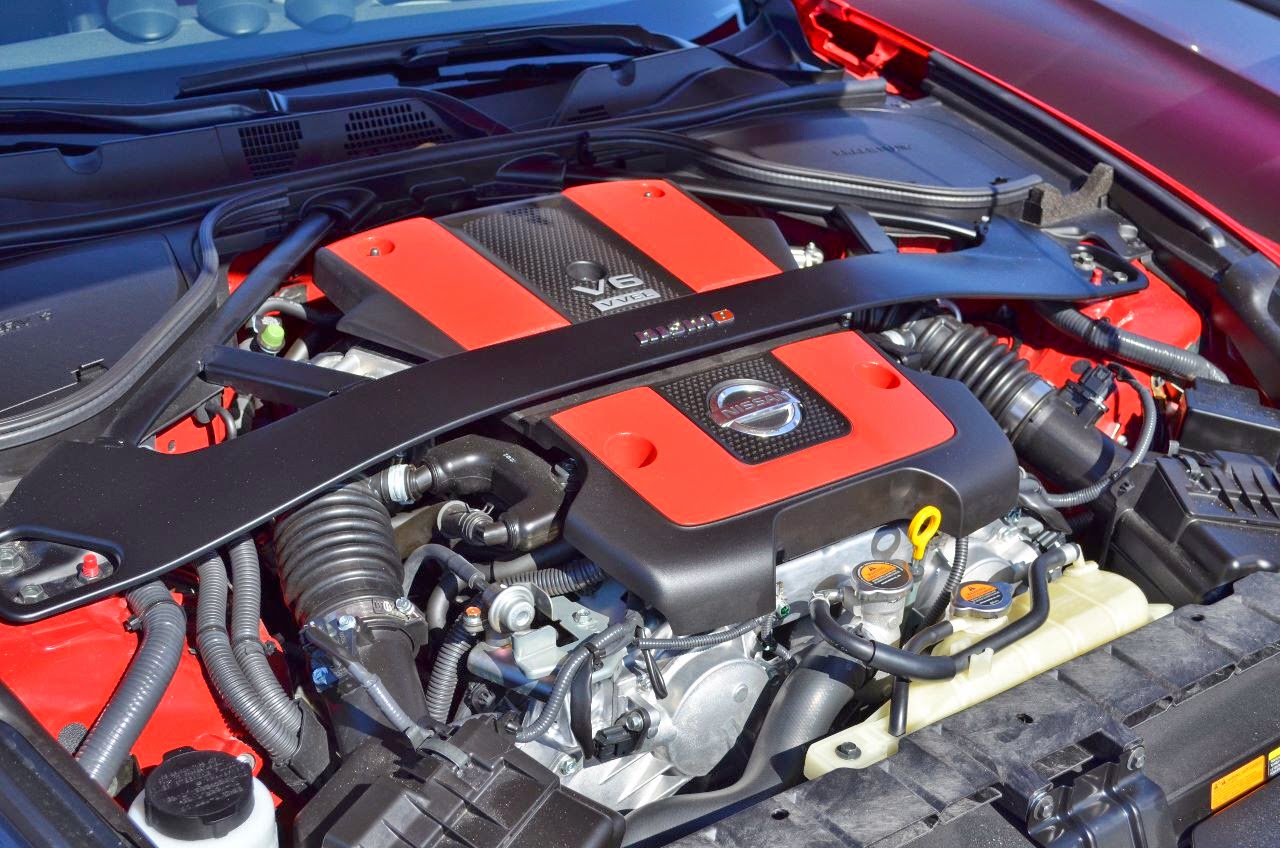 With a fairly quick-shifting seven-speed automatic transmission with downshift rev matching and manual shift mode with paddle shifters, it rockets off the line and hits 60 mph in 4.9 seconds. A red upshift light flickered as the tach needle neared the 7,500-rpm redline before the second- and third-gear shifts. There’s no sport shift setting – it’s either auto- or manual shift. Our 7,700-mile-old test car hit 100-mph in 10.9 seconds at our test site. The rev-matching does a nice throttle blip on downshifts, and revised gearing in the lower gears made for quicker-than-standard Z getaways. The leather-clad paddle shifters were long and easy to find. But a twin-clutch auto-box would be quicker as the NISMO’s automatic still hesitated briefly on some shifts. We averaged about 20 mpg on premium. 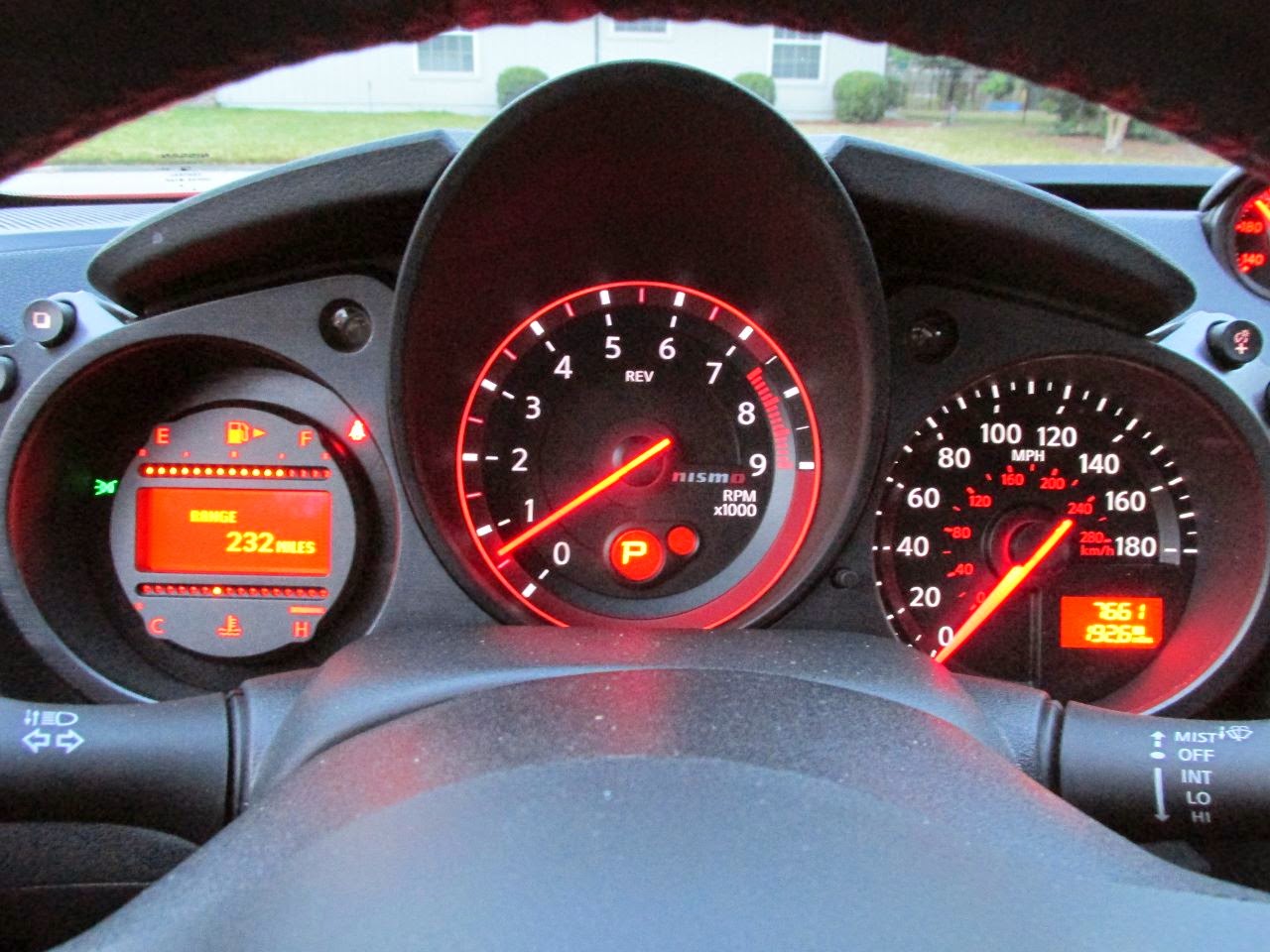 The NISMO Z has a solid structure, aided by the strut bar and a tower brace arcing over a red engine cover. It rides on a double-wishbone front suspension with forged aluminum arms and a rigid aluminum-alloy cradle and a lighter four-link rear suspension. The NISMO’s spring rates are dialed up a bit and the stabilizer bars rates have been stiffened too. The resulting ride is very firm, just a bit jittery over some potholes and expansion joints. But rebound was tolerable over sharper ruts with quick damping at compression. 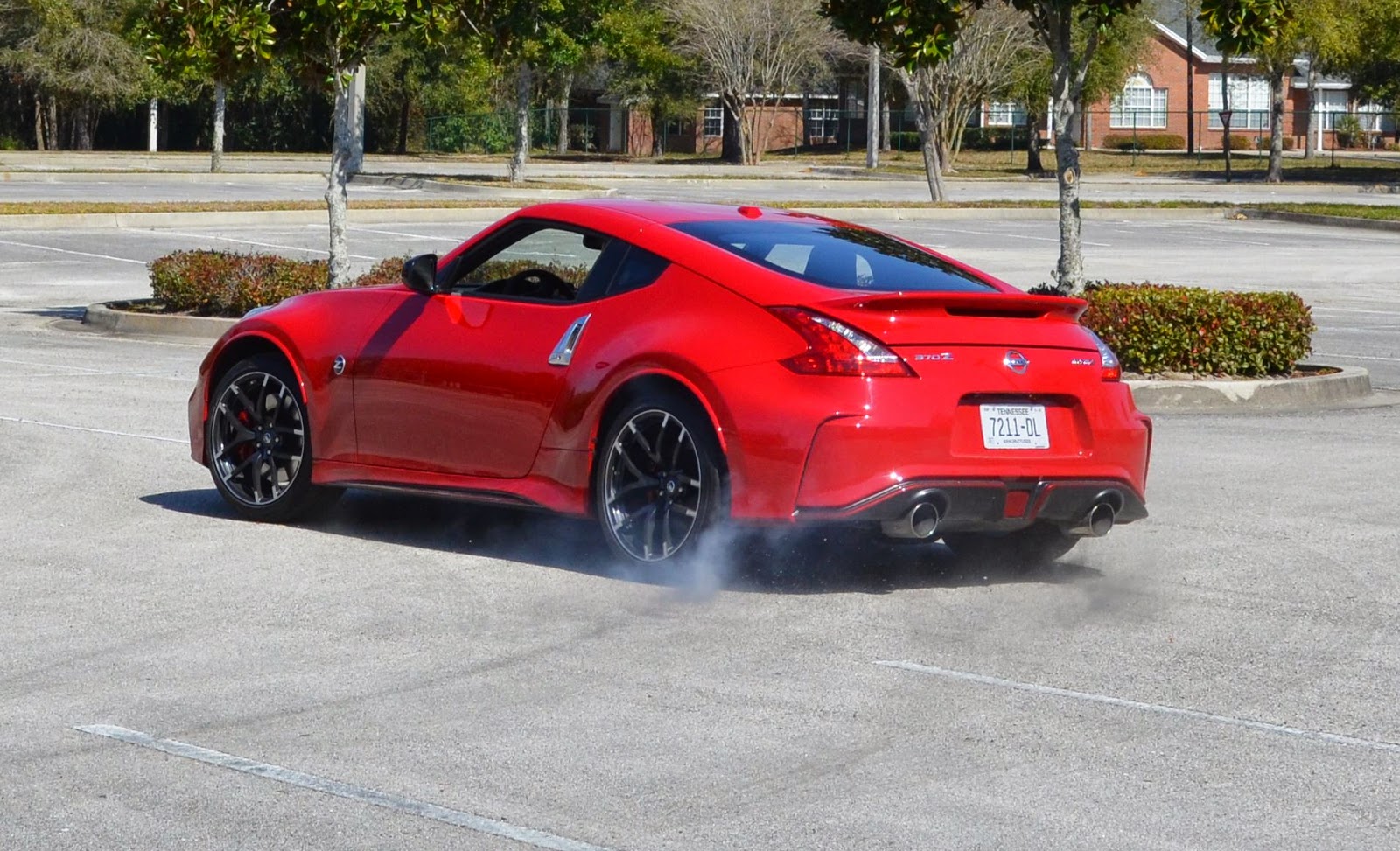 The result was a very flat cornering attitude as the NISMO carved its way neutrally into turns with delightfully precise steering. The rear hung on under throttle, offering a bit of power slide if pushed, but easy to control via throttle and a quick wheel flip. The independent rear and a viscous limited-slip rear differential helped apply power in the turns, bumps never upsetting the car. High-speed stability was great, sweeping turns seeing it just carve its way with no drama. The car was quiet on the highway bar some tire noise. The 14-inch front/13.8-inch rear vented rotors stopped our NISMO straight and short many times with no fade, minimal nosedive and precise pedal feel.

A base Nissan 370Z Coupe starts at $29,900, while a base NISMO version with six-speed manual starts at $41,990 and $43,290 brings you the seven-speed automatic. Our Tech Package-equipped model, with navigation, back-up camera, Bose audio system and HomeLink transmitter, started at $45,490. That comes with the leather and Alcantara Recaro bucket seats, a/c, power windows/door locks/mirrors, performance tires and wheels, aerodynamic aides and 350-horsepower. Our test car had few extras, making its final price $47,835. 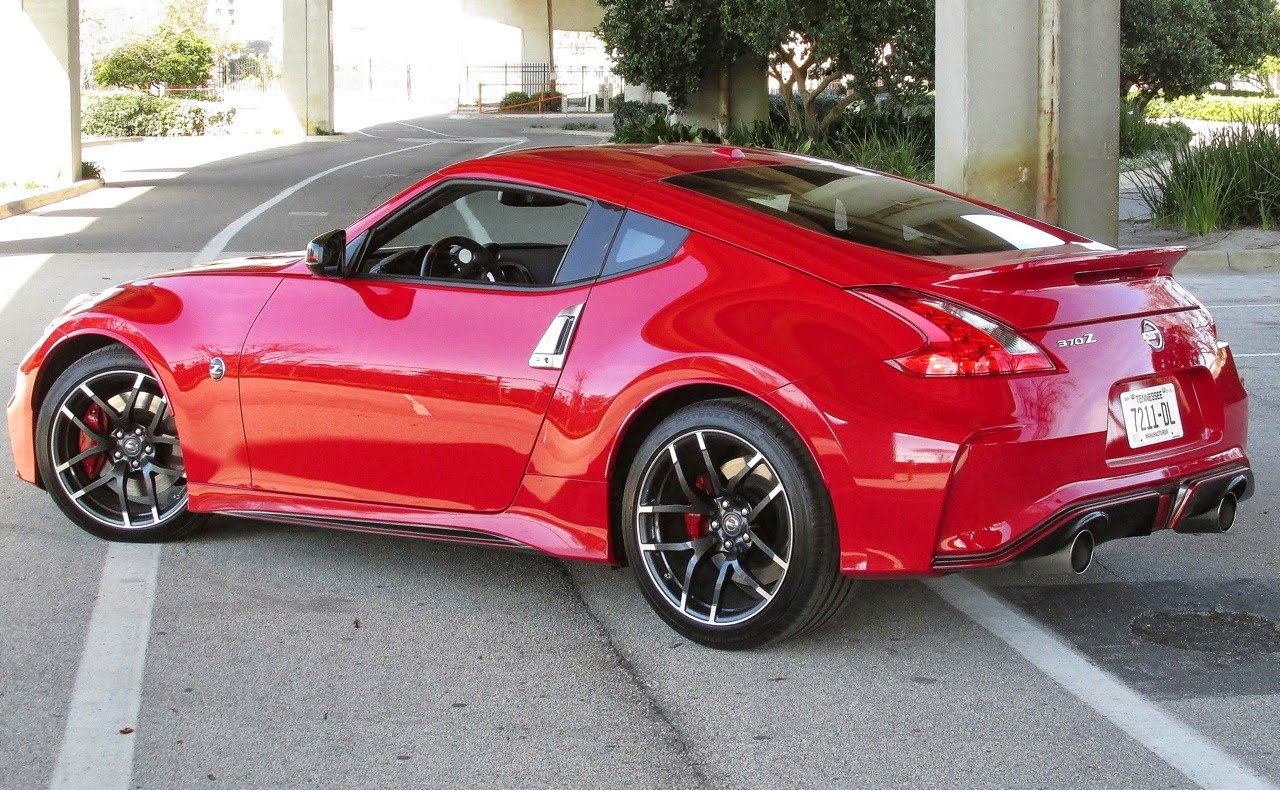 The bottom line – Yes, the NISMO should be bought with the slick six-speed manual, or maybe get a dual-clutch auto some day. And that interior needs a real updating. But the NISMO Z is now an even more buttoned-down sports car inside, outside and under the alloy hood.