Skip to content
This is my favorite adult go-kart, but its price, and hard suspension on some surfaces on SPORT – not as much fun, blogs Dan Scanlan. 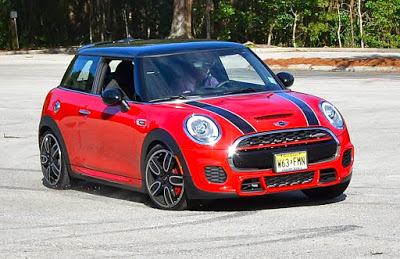 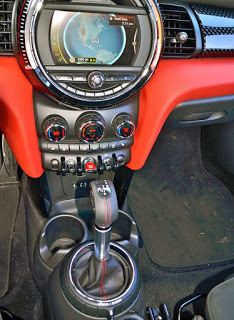 When Alec Issigonis designed the first MINI in 1959, it was a tiny 120-inch-long coupe. Then racer and tuner John Cooper got hold of one in 1960 and made it a tiny terror on race tracks and rally courses around the world.

Fast forward millions of MINIs later, and its family has grown in variety as well as size. But despite the MINI Paceman, Countryman and Clubmans out there, the BMW-owned company hasn’t forgotten what made MINIs maxi, or who made them fun. So while the latest MINI Hardtop is five inches longer than the last generation (151.9 inches), John Cooper’s spirit and big (for its size) power remains.
·
The MINI lineup starts with a turbocharged 134-horsepower 1.5-liter/3-cylinder (11 more than the previous 4-cylinder), then the Cooper S’s 2-liter, 189-horsepower (8 more) Four. But our John Cooper Works Hardtop has the ultimate – a turbocharged 2-liter, 228-horsepower/236 pound-feet of torque Four. The new engine gets a specially developed turbocharger integrated in the exhaust manifold, with direct injection and BMW’s fully variable VALVETRONIC valve control. That makes it the most powerful MINI, each horsepower nudging only 11.5 pounds of hot hatch around! 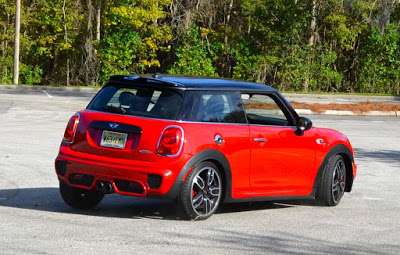 Our 8,500-mile-old red rocket leaped off the line in SPORT with some wheelspin to 60-mph in 5.8 seconds, a tenth-second under the Cooper S we tested last year; 100-mph took just over 13. The exhaust crackled and popped on overrun as it shifted quickly, with turbo whistle on acceleration and wastegate chirrup when you back off. The paddle shifters shifted very quickly, SPORT keeping the transmission in a lower gear for faster response. The engine shuts off at stops, then fires quickly when your foot begins to inch off the brakes. It seemed to save gas – we saw an indicated 30-mpg. 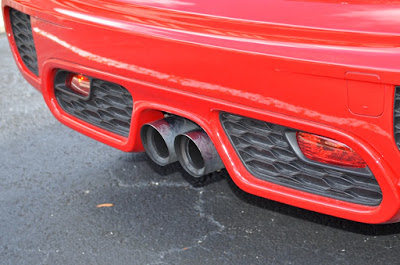 The MINI JCW gets familiar MacPherson strut front/multi-link rear suspension, but with aluminum swivel bearings plus high-strength steel axle supports and wishbones up front and more steel in back for added stiffness. The result is a firm yet fairly compliant ride over bumps in MID, and very firm with quick and decisive rebound control in the Dynamic Damper Control’s SPORT setting. Over cobblestones or speed bumps, the ride quality is super stiff with a hard edge and not fun for some folks. It’s aggravated by the very slim sidewalls – there’s about an inch between tread and outside front wheel rim when we circled our skidpad. 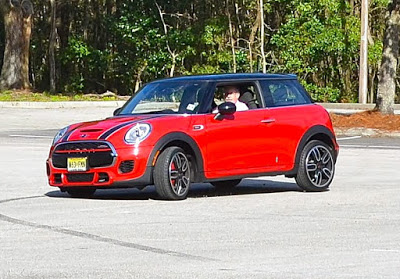 That said, on that skidpad or a smooth curving road, the MINI JCW is positively eager to turn in and stay planted, go-kart agile and nimble with superb steering feel. It goes around curves like it was tied to a string. It barely leaned in a turn, hanging in quite neutrally. The front tires understeered progressively when pushed and it was easy to catch with throttle and stability control, which can be cut back or turned off. It truly was a point-and-shoot four-wheeled weapon that can be pushed, then played. I wish I’d had one when we recently tackled California Panoramic Highway northwest of San Francisco in a base MINI, and that little coupe did those winding mountain roads proud.

An electronic locking function for the front axle differential and another system that irons out torque steer in the electromechanical power steering leaves it very direct with lots of feel. The disc brakes, with Brembo calipers up front, offered very good control and a quick bite, with quick stopping power and no fade after repeated hard use. Go ahead, just play hard and the MINI JCW has fun doing it!

The third-generation MINI looks like the first – a two-box shape with wide-eyed headlights, a pert rear end and minimal overhang. There is a longer nose on the ‘15 MINI than before, while the John Cooper Works Hardtop gets some aggression added to the cute.  Oval chrome-trimmed LED headlights flow around the front fenders’ corners, with glowing DRL light rings. John Cooper Works black stripes flank the fake hood scoop above a chrome-trimmed grill with gloss black bumper above a very aggressive lower air dam with functional intakes. A black accent runs off the air dam to become flared wheel arches framing bulging 5-spoke JCW Cup silver and black wheels wearing low-profile Dunlop SportMaxx 18-inch performance rubber. Big LED taillights frame the back hatch under a sculpted JCW roof spoiler. The car has an athletic stance with aggressive rubber peeking out of fenders front and rear, its longer face daring the world to get in its way. 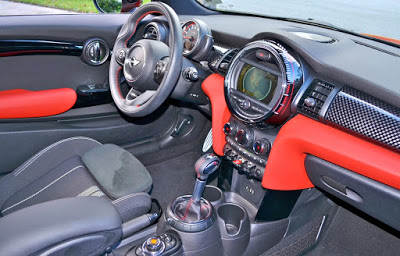 MINI interiors are a bit bigger, and not as cartoonish as the first-gen versions in 2000. But they still have character – and some oddities. For example, our MINI’s door handles inside and out are lit at night, those on the interior phasing through colors before settling on green. Inside, JCW sports seats done in black with white stripes have extendable BMW-style thigh bolsters. They were very supportive and firm, with manual adjustments and lumbar. The JCW steering wheel has a fat leather-clad rim with stereo, cruise and phone buttons.

Under the center of the padded black dash top is what looks like a big gloss black digital watch with minute marks on the rim. But that’s not the huge speedometer of past MINIs. This generation moves a 160-mph speedo atop the steering column with a multi-function trip computer display on the bottom and 8,000-rpm tach on the left. That big center circle is an 8.8-inch-wide color navigation screen that also displays the AM-FM-SiriusXM audio; multimedia; smartphone/Bluetooth and contacts; MINI Connected for smartphone apps; car settings; owner’s manual; and “Driving Excitement.” That last is a power and torque display with telltales, plus engine and exterior temperature readouts and engine mode. It’s controlled by a BMW iDrive-like twist & tap controller on the center console. It’s tough to find sometimes on the move, as are its menu buttons. But voice command works well for audio and navigation. 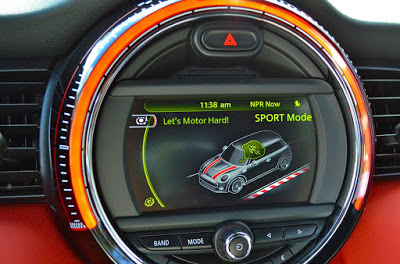 The big circle also has an LED light ring that pulses red when the volume knob is used, or white, red or green depending on which drive mode (MID, SPORT or GREEN) is selected. There’s also a pulsing red engine Start switch flanked by retro-looking toggle switches for the engine on/stop economy setting and traction/stability control. Ahead of the round gearshift base are a 12-volt outlet and MP3 and USB ports. The six-speaker stereo is good, not great, with distortion when cranked. A slightly longer wheelbase means one, maybe two six-footers can be squeezed in. The rear seatbacks split 60/40 to expand the tiny 8.7-cubic-feet of cargo space. 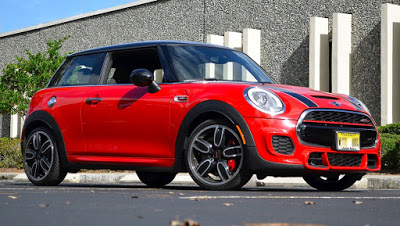 A base MINI with 3-cylinder starts at $20,700, while a Cooper S was $24,700 and our John Cooper Works version based at $30,700, with standard 6-speed manual, cruise and stability control, 17-inch alloy wheels, Brembo brakes, AM/FM stereo and driving mode selector. Our JCW added $1,500 automatic transmission with paddle shifters; $750 media package with center armrest and the Visual Boost; $750 navigation; $750 Dynamic Damper Control; $650 cold weather package with heated front seats; $100 black strips and other trim options that brought the final price to a not-so-mini $37,350. Some friends commented that that’s a lot of cash for a MINI.

For more information on the latest Minis, please visit http://www.miniusa.com/content/miniusa/en/tools/learning/build.html