Skip to content
‘This is a GT that can do daily commuting as well as weekend play, although it is more grand touring than some other muscle cars, blogs Dan Scanlan.’ 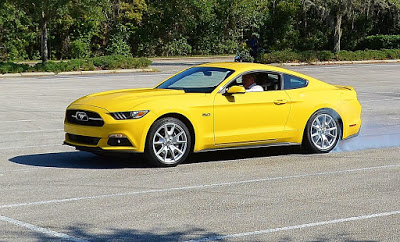 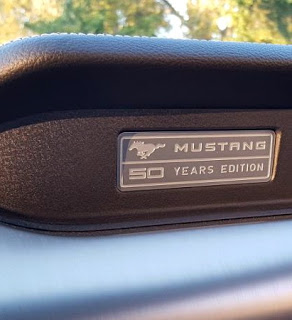 This isn’t the first Sixth-Gen Ford Mustang GT I’ve tested. Nope – instead of starting with the 435-horsepower 5-liter Mustang, my first one was the Whipple-supercharged 725-horsepower Galpin Fisker Rocket with a dramatically restyled carbon fiber body penned by Henrick Fisker and a hand-finished Italian leather/suede interior. Now comes this sleek yellow GT, very reminiscent of the ‘69 Boss 302 Mustang my college buddy Michael had.

With memories of the past and the exotically modified Mustang in my brain, how does the current 50th anniversary model fit in the annals of ponycars?  Like the good old days, Mustangs can be corralled with multiple powerplants, although they are a bit more high-tech these days. 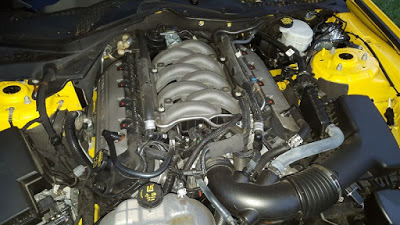 Power choices start with a 2.3-liter EcoBoost Four with 300 horsepower; a 3.7-liter V-6 with 310-horsepower, our car’s 5-liter V-8 with 435 horsepower and 400 pound-feet of torque, above, on up to the 526-horsepower GT-350R. Selectable Drive Modes adjust engine response to normal, sport, track and snow/rain, plus transmission and electronic stability control settings. My preference was “Sport,” giving the steering a more direct feel, faster throttle response and a bit twin-pipe growl under power. Even under full throttle, I’d like a bit more bark in “Sport.” Still, this is a very quiet ponycar at speed, with almost no wind noise. We also saw an average 20-mpg on regular. 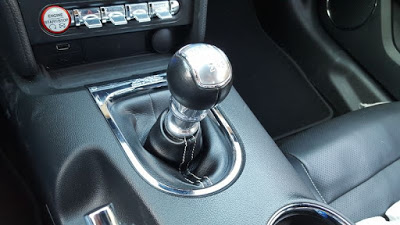 For fastest launches, we set launch control in Track Apps and went for 3,700-rpm for our launch. Press the clutch, rev the engine and it tops out where you set it. Dump the clutch and drive mode reined in some wheel spin to get our 21,000-mile-old test car to 60-mph in 4.1 seconds, with wheel spin into second gear, then 100-mph in 11 seconds. The accelerometer claimed .87 Gs of force on launch. We noted some notchiness into second gear, but overall precision and decent throws. Flip drive mode to Track, and traction control is fully disabled for more wheel spin at launch, while some stability control stays active to handle power oversteer after a certain point, Ford said.

Up front, double-ball-joint independent MacPherson strut suspension with tubular stabilizer bar. In back, the beam axle is banished for independent suspension with new aluminum rear knuckles for less unsprung mass, and coil springs. The result is a supple yet firm suspension that doesn’t get upset in a bumpy turn. The suspension quickly handled road imperfections, loping along with a bit of quickly-damped rebound. And the rear end talked better with the front end. 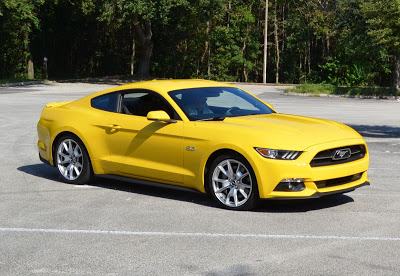 The Mustang would power out its rears on cold tires, but a bit of right foot action caught it. The coupe was perfectly comfortable and neutral on an expressway ramp, with high grip level. A 90-degree right-hander in second gear was also a breeze, the rear rubber staying planted as I powered out of the turn. There’s minimal body roll as well. Set in “Sport” in an aggressive turn and the tail could power out, but it was very controllable. On our skidpad, the Mustang took a set and circled with a touch of power oversteer caught by stability control. The car had some more body roll in the skidpad, with direct steering feel and control. Put on “Track” mode, and we could power the tail out with tire-smoking oversteer. The built-in accelerometer claimed .95 Gs in left-hand turns and 1.18 Gs in right hand turns.

Steering feel was direct, with good feedback. The standard disc brakes had a firm and responsive pedal, offering solid stops and no fade after some repeated hard use. The accelerometer said we pulled 1.03 Gs in braking. Along with the backup camera, there’s blind spot detection, cross-traffic alert and adaptive cruise control that maintains distance and speed with the guy in front down to about 20-mph. 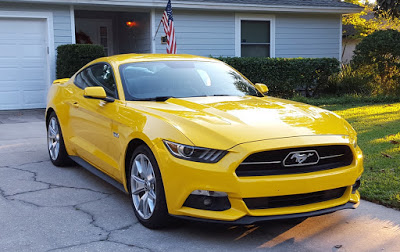 There are 10 varieties of ‘15 Mustang, but Ford obviously channeled that ‘69’s long hood/short rear deck look here, the sheetmetal drawn taut over its bones. Sitting on the same wheelbase as the last version, it is four inches shorter, but looks longer. The faux side vents and angular grille are gone. Black honeycomb fills the six-sided Ford grille that projects ahead of hooded slit headlights with triple-slit LED running lights. The lower air intake flares twin wings with faux side inlets and fog lights over a black lower air dam. The hood gets a squared-off power bulge flanked by small vents. On the flanks, two design lines frame a side channel aft of the “5.0” fender badge, then a flared black lower sill. The tail is sleeker, a gloss black panel with tri-bar taillights with sequential turn signals. It all sits on 10-spoke silver alloy wheels, below, wearing Pirelli P-Zero Nero P255/40-ZR19-inch radials. Side mirrors project a detailed galloping horse on the ground at your feet; and our newest Mustang gets an aluminum hood and front fenders for lighter weight. 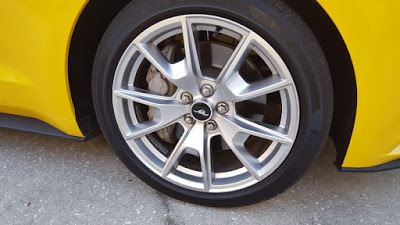 More 1969 is channeled inside, with a dual-cowled black dashboard and a three-spoke steering wheel with a horse on the hub. The black buckets are comfortably supportive, while the padded cowls get dual white stitching on the edges, aluminum accents and a passenger-side alloy badge with another pony and the words “Mustang – Since 1964.” 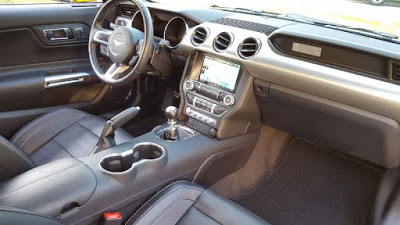 There are inset twin gauges – the 160-mph speedometer gets “GROUND SPEED” on its face, while “REVOLUTIONS PER MINUTE” is on the 8,000-rpm tach with 6,500-rpm redline. In between, a color trip computer screen that can display engine information, radio stations, navigation and other info. It accesses menus for MyColor gauge and interior lighting, plus Track Apps – lateral, braking and acceleration G-forces; timer; braking performance; launch control and line lock. Low dash center are big alloy-look toggle switches for steering and powertrain modes, traction control and warning flashers. Next to them is a red-rimmed white “engine start/stop” button. 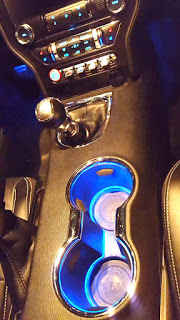 The rest of the cabin is stylish, well thought out and retro while not being cartoonish. The steering wheel gets a thick leather rim with stereo, cellphone and voice command buttons on the right, and trip computer and cruise control on the left. Dash center, that tubular aluminum trim hosts vents over a large navigation touchscreen with a solid 12-speaker AM-FM-SiriusXM-CD stereo, climate control, phone, Sirius Travel Link and SYNC AppLink to control smartphone apps. There are two USB ports and a pair of 12-volt outlets, plus an MP3 input and SD card slot. The driver’s seat gets three memory presets, while both get heat and cooling. The back seats are kid-sized, with almost no legroom. They split and fold to expand a decent trunk that hosts the stereo’s sub-woofer. Overall, it’s a very comfortable, quiet and user-friendly cockpit with decent visibility and fit and finish. 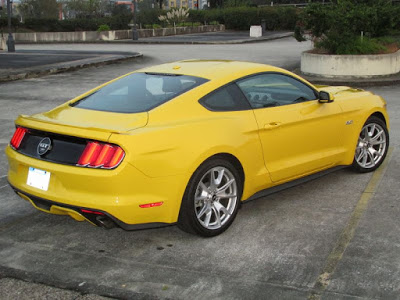 The new Mustang shows that having the longest ponycar heritage doesn’t mean you have to be stale. This 5.0 has the aggressive looks that hint at heritage but looks modern, plus a usable engine and suspension and good build quality. The Sixth-Gen ‘Stang is better behaved, more fluid in its corner transitions, and more fun to play with and not worry about getting slapped. 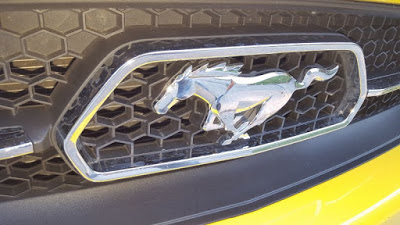 For more information about the latest Mustangs from Ford, please visit http://www.ford.com/cars/mustang/gallery/photos/