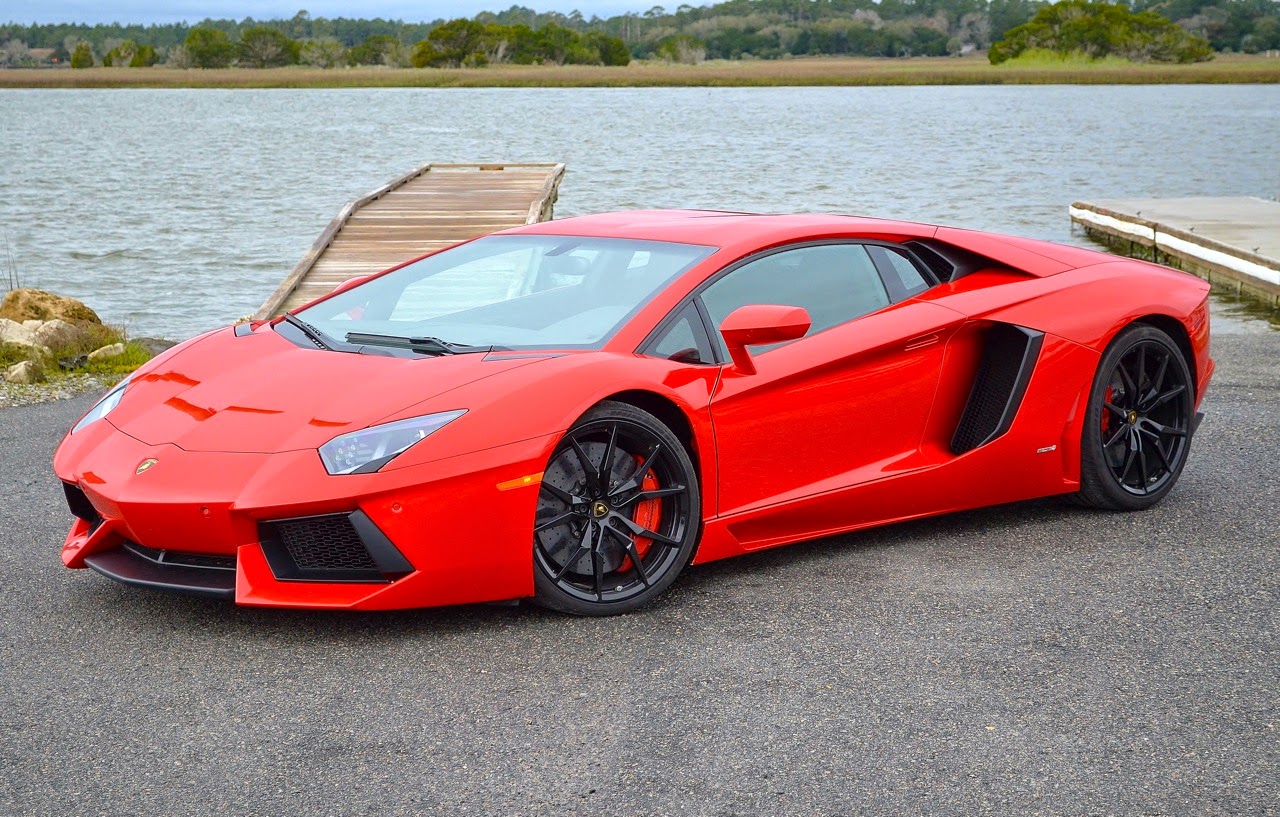 It was this simple. I was pointed to a Rosso Lamborghini Aventador LP 700 and asked,
“Would you like a drive?”

The coastal Florida roads outside the Amelia Island Concours d’Elegance were thick with traffic, and worse, Highway Patrol and local deputies. They were hungry, looking for fools dumb enough to nail a 700-horsepower Lamborghini on their home turf after a day of snacking on new Porsches, AMG Mercedes-Benzes, Jaguar F-Types and a McLaren or two. Bring it on!

As has been tradition, this Lamborghini is named after a bull, a courageous beast that entered the Saragossa Arena in Spain in October 1993 and earned the “Trofeo de la Peña La Madroñera” for its courage. The occupant cell, including tub and roof, is a woven composite component that weighs just 325.18 pounds. Science aside, the LP700-4 (longitudinal position engine/700-horsepower/four-wheel-drive) is one badass-looking car, sleek and brutal. It’s 15.6-feet-long, a very low 3.6 feet high, and, at 7.4-feet, very wide! 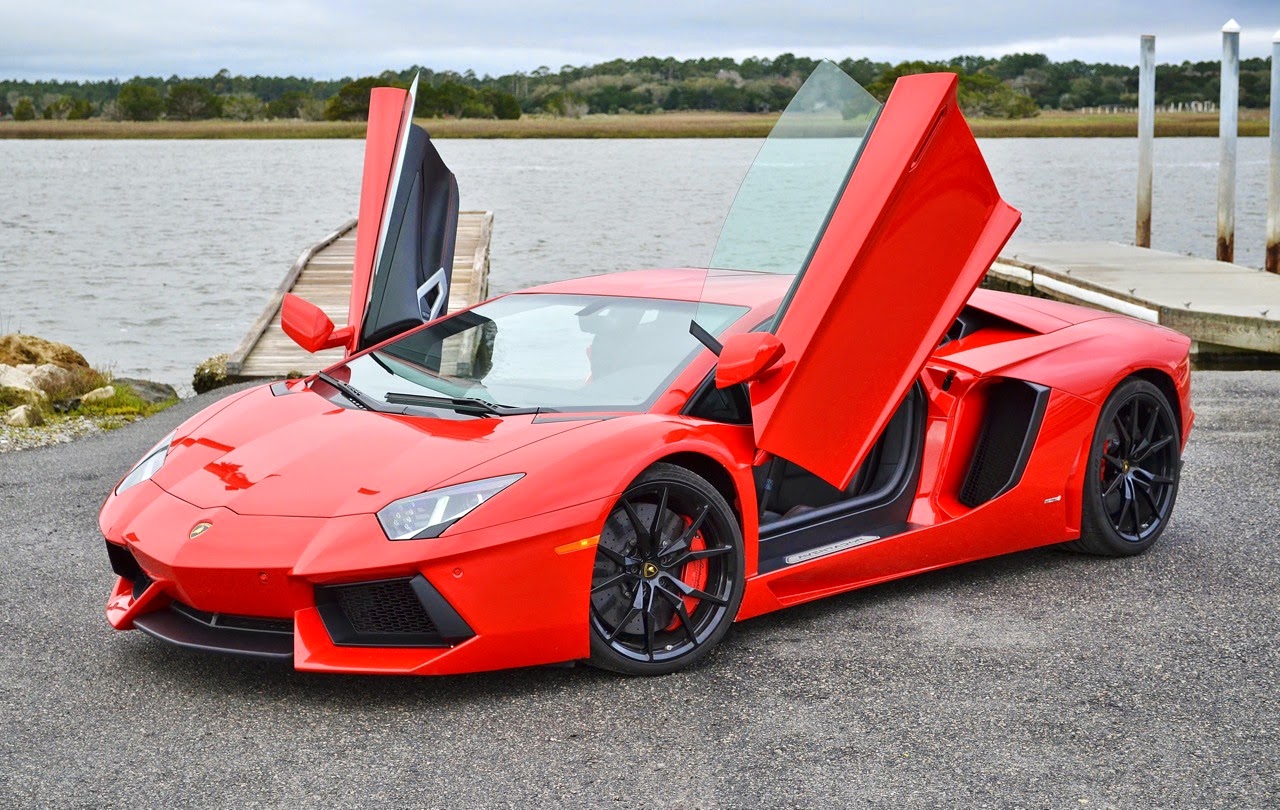 Designers at Centro Stile Lamborghini made its shin-high nose sharp and pointed over a deep double-slit center intake and air dam. It’s flanked by twin side intakes akin to the flaring nostrils of a very angry bull. Above the nostrils are headlights with the first of many Y-shaped LED running lights framing the projector beam.

The raked windshield is almost as laid back as the hood, with thin arcing pillars that flow into the slightly double-bubbled roof. The front fenders flow closely around the black 10-spoke alloy wheels wearing very low profile P255/35 ZR19-inch front Pirelli PZero rubber. Then the fender top line dips before rising and flaring wide over a side channel that incorporates a huge black-edged side engine intake over a flared lower sill. The rear fender’s top line flows into a wide set of muscular rear haunches that flow out to very neatly to frame a foot wider rear track and Pirelli P335/30 ZR20-inch rubber. 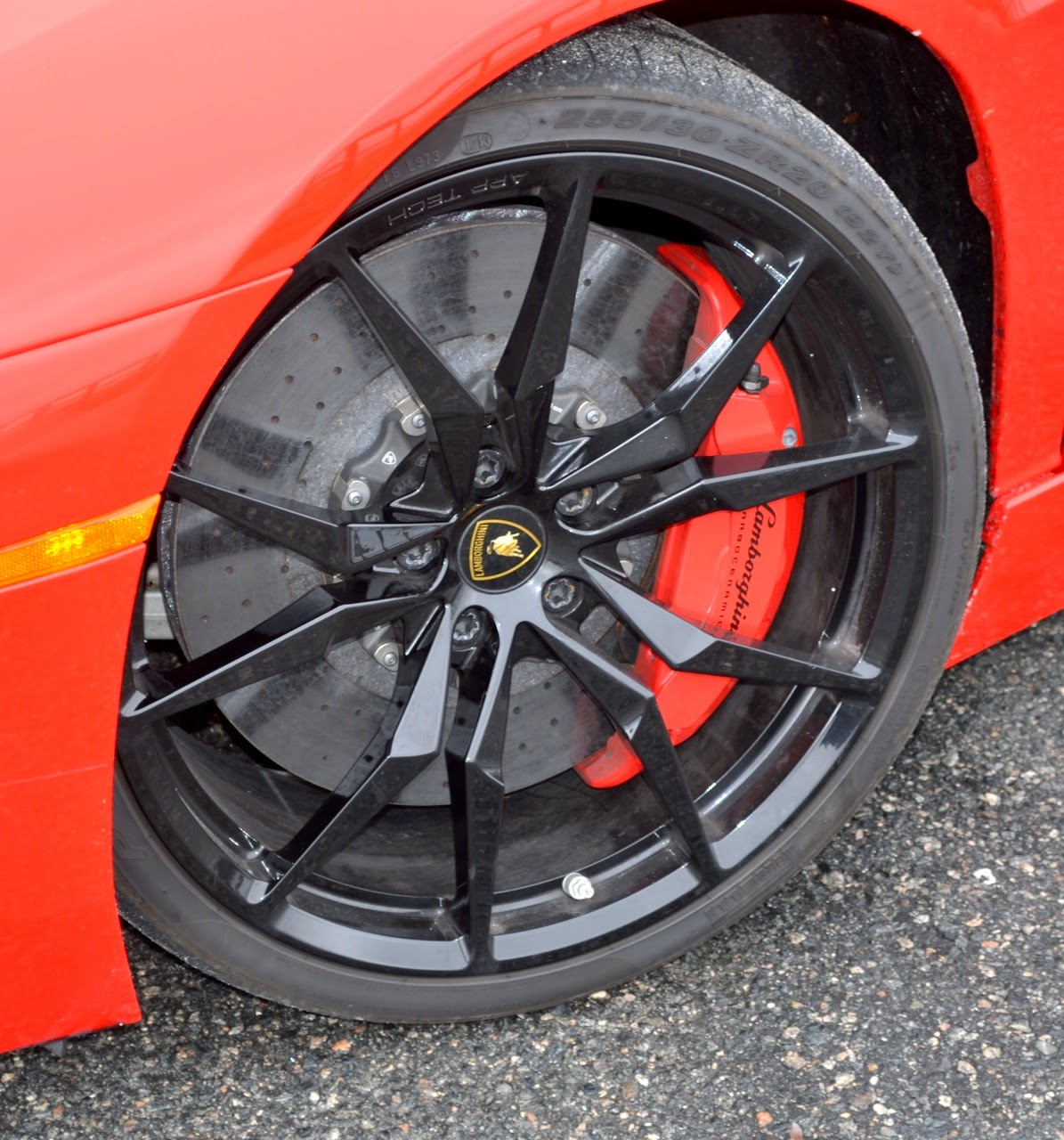 There’s a small vent aft and low of the front wheels, another forward of the rear rubber, and electronically operated air intakes on the flying buttresses that flank the engine, opening when that massive V-12 needs additional cooling. Over the engine live three transparent slats that put the V-12 and its bracing on display beautifully.

The Aventador’s rear end is just as dramatic. A trio of Y-shaped slim taillights is at the trailing edges of the flying buttresses. There are huge black mesh cooling vents on an angular rear bumper and a huge central exhaust pipe framed in an aerodynamic lower diffuser. The overall look from the rear is wide and brutal, hunkered down on very aggressive rubber. Like all V-12 Lamborghinis since the epic Countach of the 1980s, the long side doors on the Aventador pivot skyward from a front fender-hinged mechanism. You stick your right foot in and duck as you (fairly easily) lever yourself over the wide sills into a form-fitting leather bucket seat with double red stitching. Almost every surface is done in low-gloss leather with double red stitching along every edge that isn’t surfaced in aluminum. 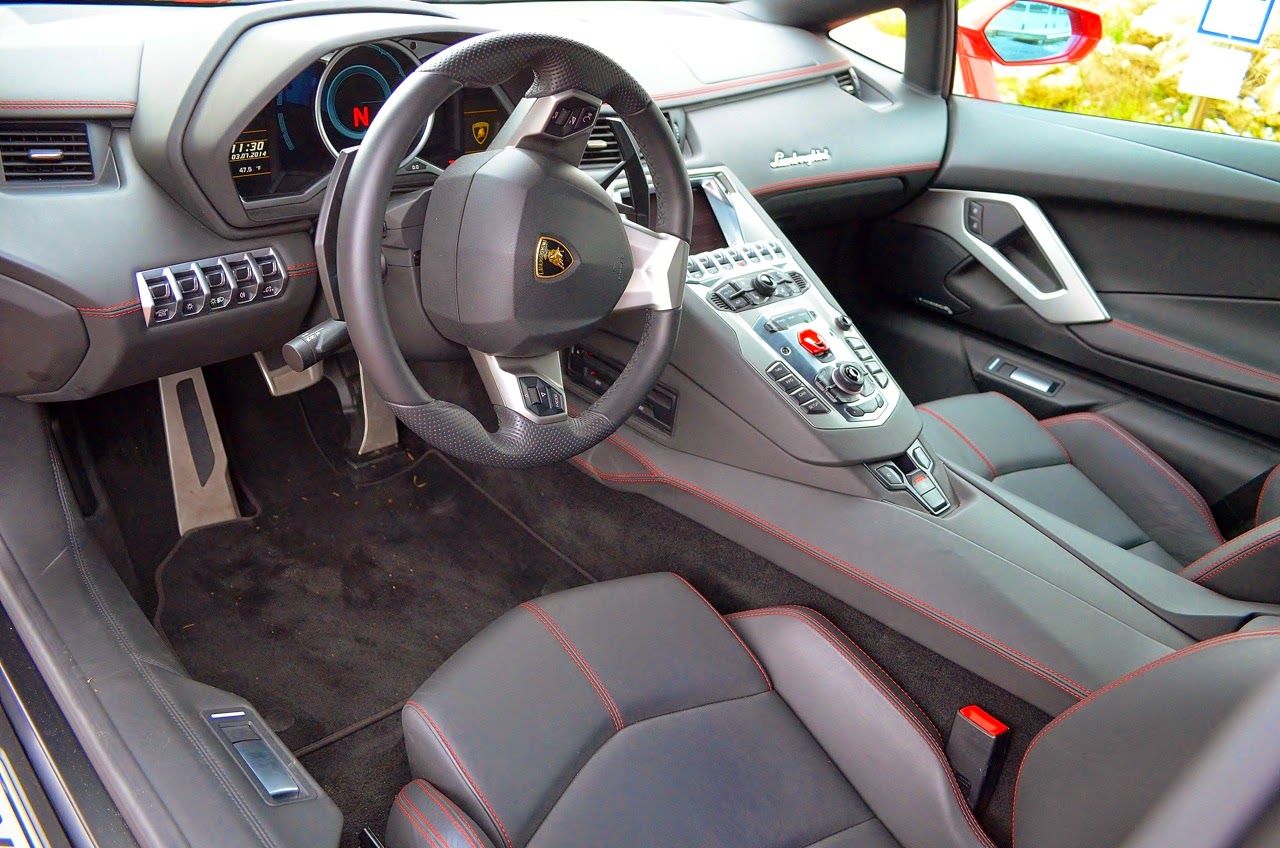 I would have appreciated a half-inch more legroom, but headroom is fine. A three-spoke steering wheel with a thick leather-clad rim has some familiar Audi-style buttons for audio. Through the flat-bottomed wheel lies the six-sided binnacle with a configurable TFT-LCD gauge package centered on either a 9,000-rpm tach with digital speedometer, or 230-mph speedometer, both with digital needles and a seven-speed gearbox indicator. The central display is flanked by gauges, clock and stereo controls. It’s all crystal clear and quick to display. 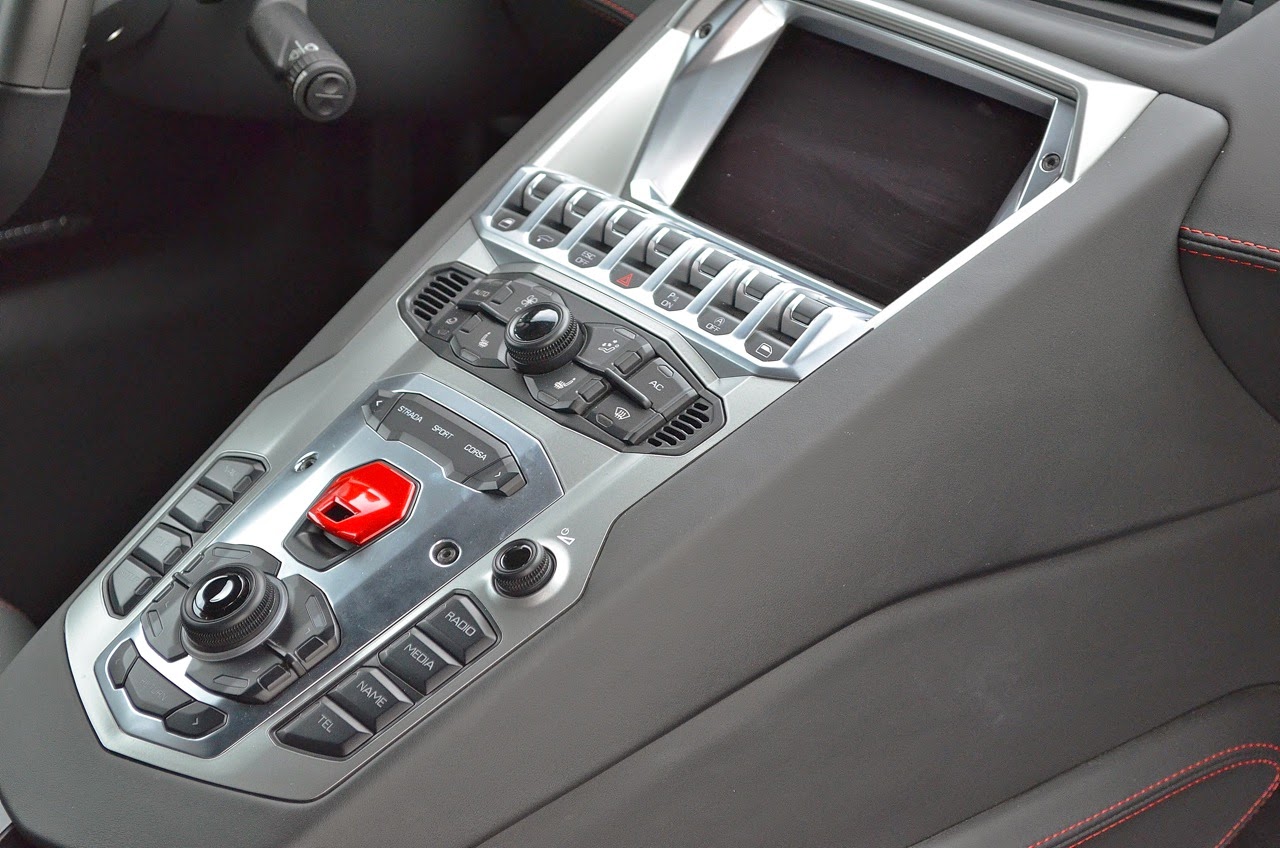 But it’s what is on the driver’s right that makes you feel like you are at the yoke of a jet fighter. The V-shaped console starts with a recessed navigation/multimedia screen with alloy switches in a row underneath for the power windows, stability control, even a power lift so the Aventador’s beak clears driveways. Climate control is next, and then comes the transmission, engine, suspension settings for Strada, Sport and Corsa. Then the most useless and coolest button in exotica – a red switch cover over the Start button that fires up the V-12 behind you. 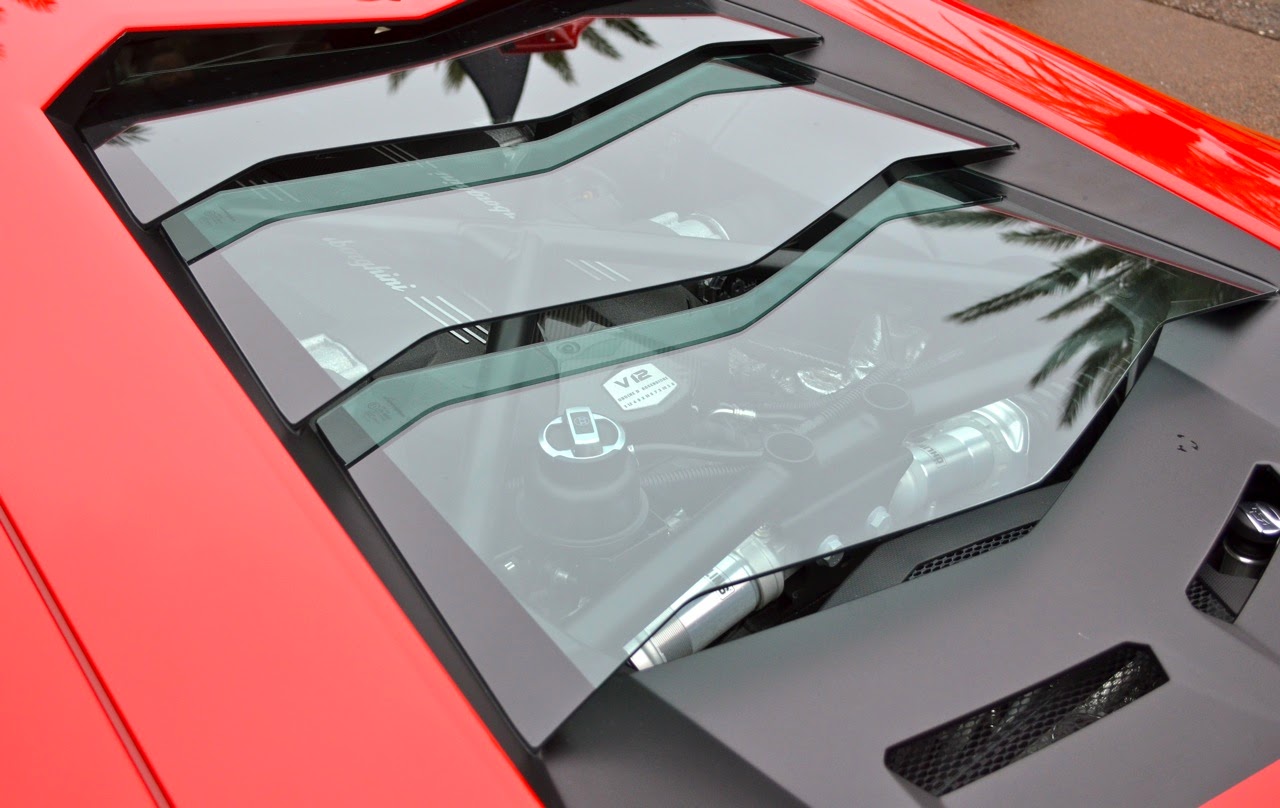 There is no gearshift – long-handled paddle shifters do the duty, with a reverse and parking brake button at the base of the console. You have alloy pedals in the narrow footwell, with lush Alcantara suede headliner overhead. Behind and high, the view in the slim slit for the rear window offers a tantalizing hint of the black-finished V-12 engine and cross-brace and the clear engine cover slats. In the side mirrors, the wide hips of the rear fenders are amazing.

The heart of our 1,900-mile-old beast is the 700 horsepower 6.5-liter V-12 boasting a power-to-weight ratio of 4.96 lb/hp. Lambo states the 0-60 mph acceleration figure is 2.9 seconds, and it felt like it when we nailed the throttle and the coupe would thunder ahead. We guess 100-mph can be polished off in well under 10, shoving you back in your seat as it heads
to a top speed of 217 mph. 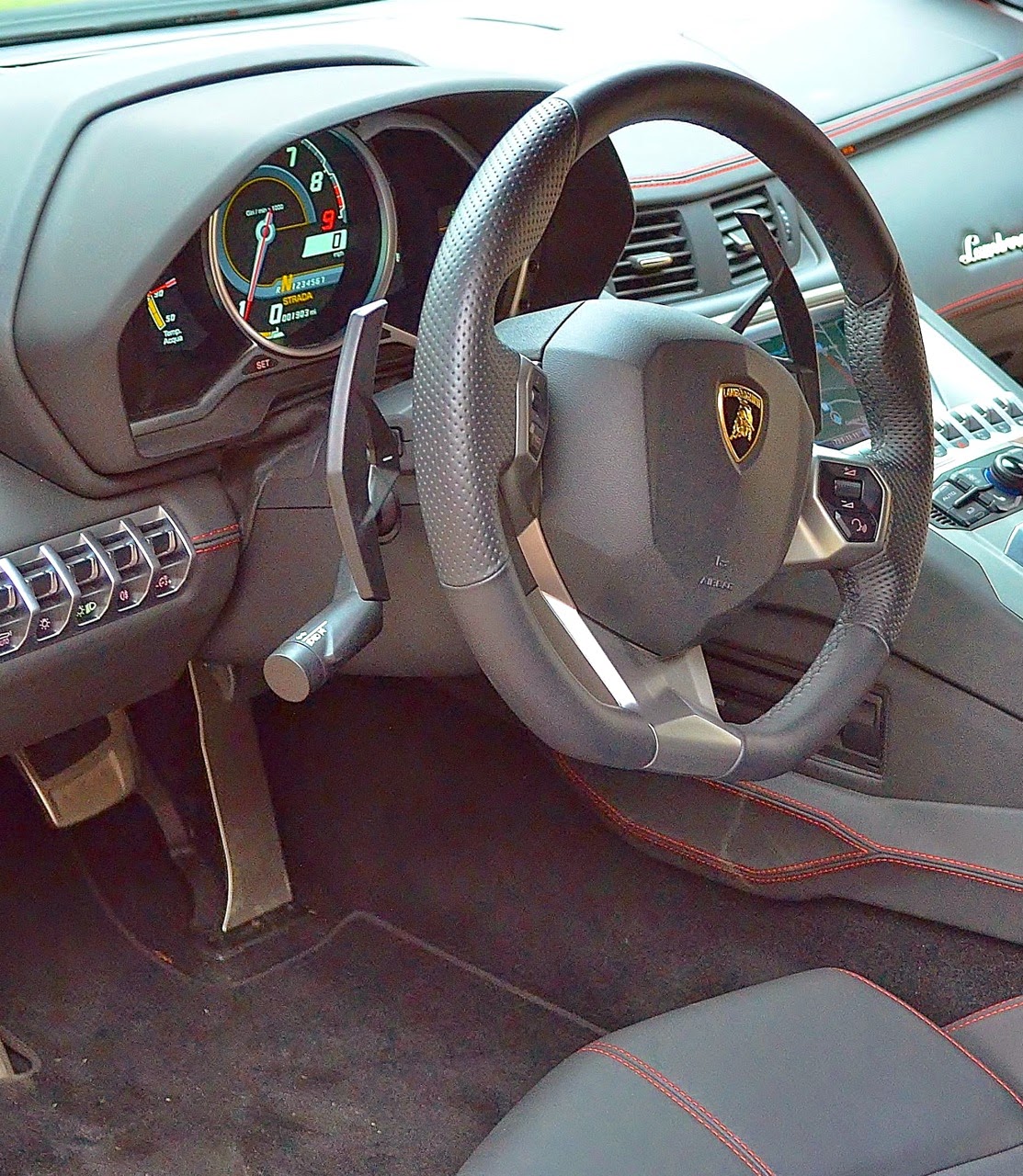 The LP 7004‘s drive modes are Strada for road, Sport, and Corsa for racetrack. Each adapts the ISR (Independent Shifting Rods) transmission shift points and aggressiveness, power steering feel and how the all-wheel-drive functions. The single-clutch paddle shift system delivers authoritative-yet-smooth shift points in Strada, and warp-speed (50 milliseconds) snaps with a hammer-shot up-or downshift to the butt in Sport or Corsa if you work the gas pedal deep. It is brutal but not unexpected, and it handles a lot of power quickly. Lambo calls the ISR single clutch system the “world’s most emotional gear shift.” But it is the last single-clutch they will make.

Strada gives you the most comfortable ride, firm but not objectionable. The LSR stays in a higher gear more often and lets the engine do the work. On a smooth road at 60 mph, the car is so quiet all you hear is a bit of tire hiss and the engine breathing behind you. Corsa really sharpens up steering feel and firms up the ride, even deploying dual wings at the trailing edge of the rear fenders. Put your tight foot down and the engine responds much faster, singing high to a redline past 8,000 rpm. The horizon just comes at you as the engine generates an amazing snarl, with a feral throttle blip on downshifts. It also sets up the Haldex AWD for a bit more front bias to help pull this supercar through the turns. 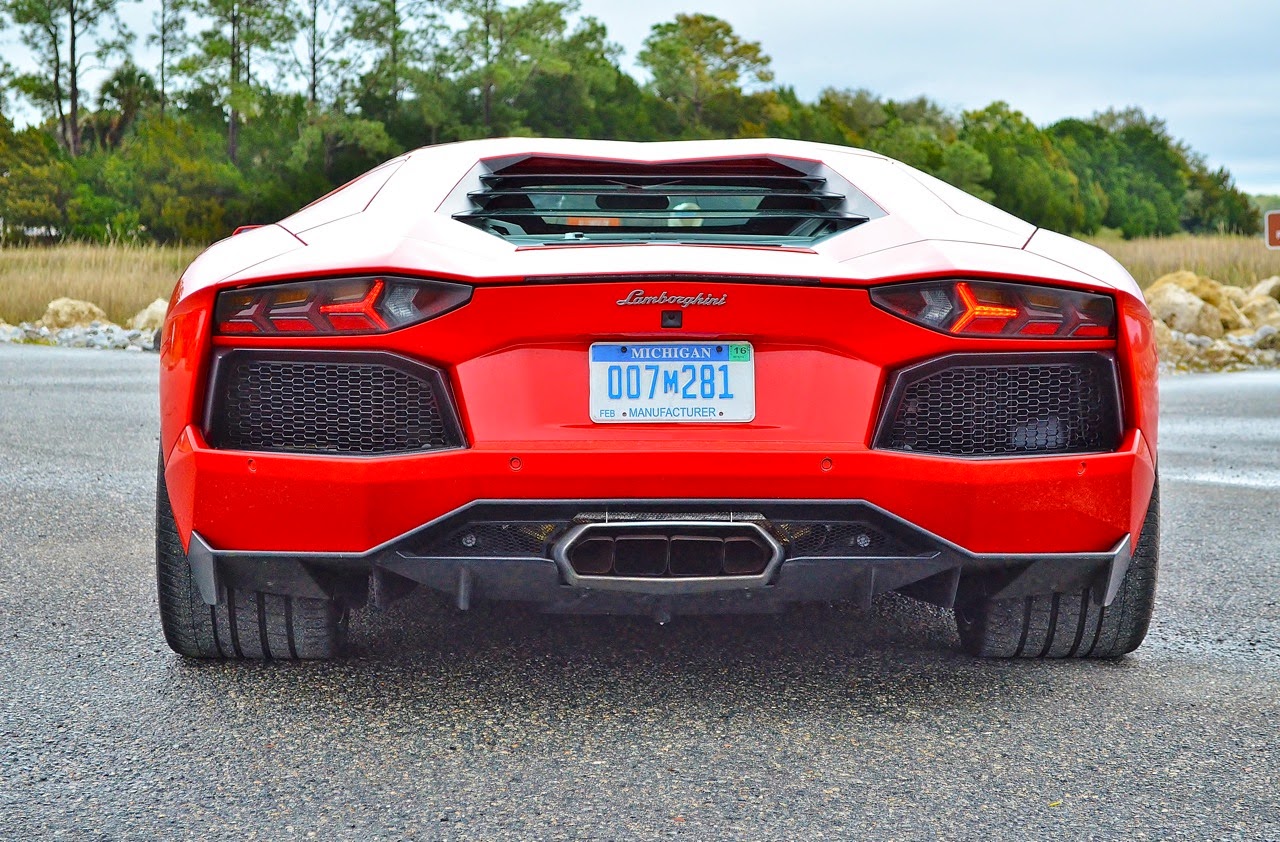 Our big Lambo felt very secure on the straight roads of coastal Florida, all four tires securely glued as we hammered away. We did goose the tail out a bit in a roundabout with throttle, easily caught with the massive rubber and front wheels working. The width is seen but not really felt. There are also carbon ceramic brakes that work immediately and haul the wedge down quickly, with aero braking from the rear wings with no fade. The Aventador is a feral creature that doesn’t coddle if you dare step on its tail, but does offer the security of all-wheel- drive grip with a soundtrack that rivals anything out there.

The Lamborghini Aventador is a $397,500 Supercar with everything we had in our drive as standard plus the $7,550 transparent three-panel roof, $4,900 parking sensors/backup camera and red brake calipers for $1,390. Total price sans destination: $411,340.  While most of the Aventador’s competitors exude presence in appearance, price and power, and sound amazing when pushed, nothing matches the look and sound of a Lamborghini, especially one powered by a mid-mounted V-12 line that began with the Miura.

For more information about the latest from Lamborghini, please visit http://www.manhattanmotorcars.com/new-cars/?make=lamborghini