Skip to content
Zero to 60 in 3.8. Zero to open-top bliss in less than 20. What’s not to adore about the new Stingray Convertible? writes Road Test Editor Howard Walker. 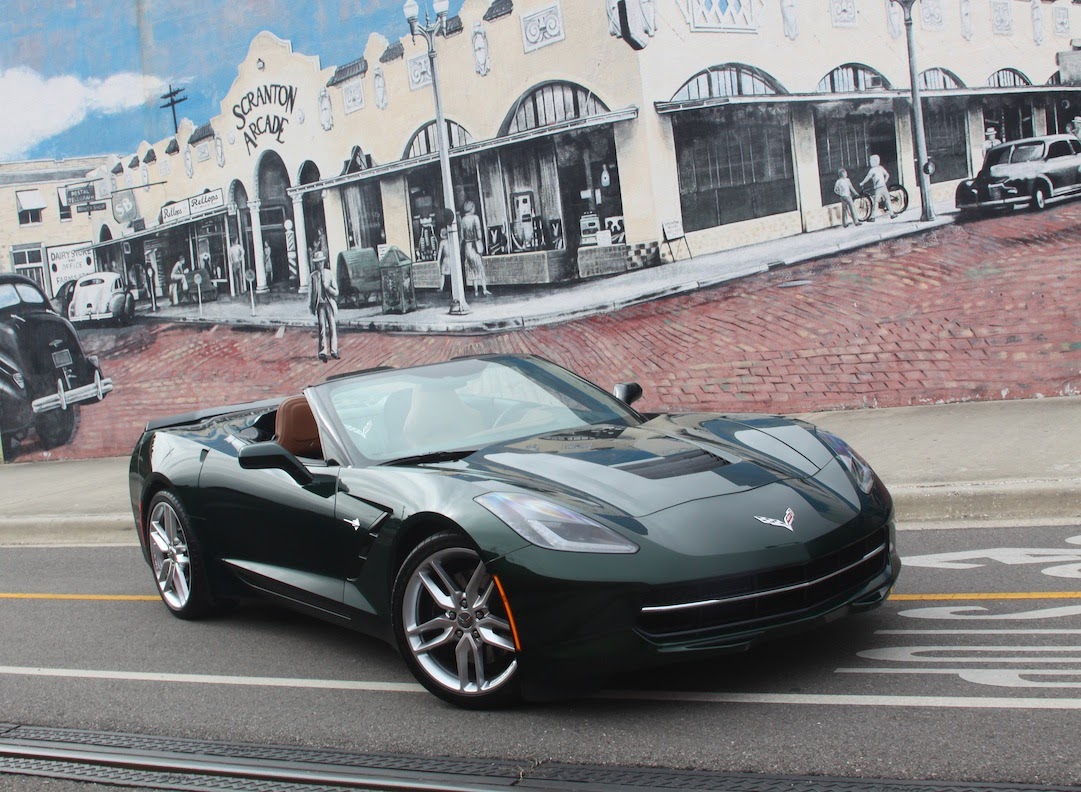 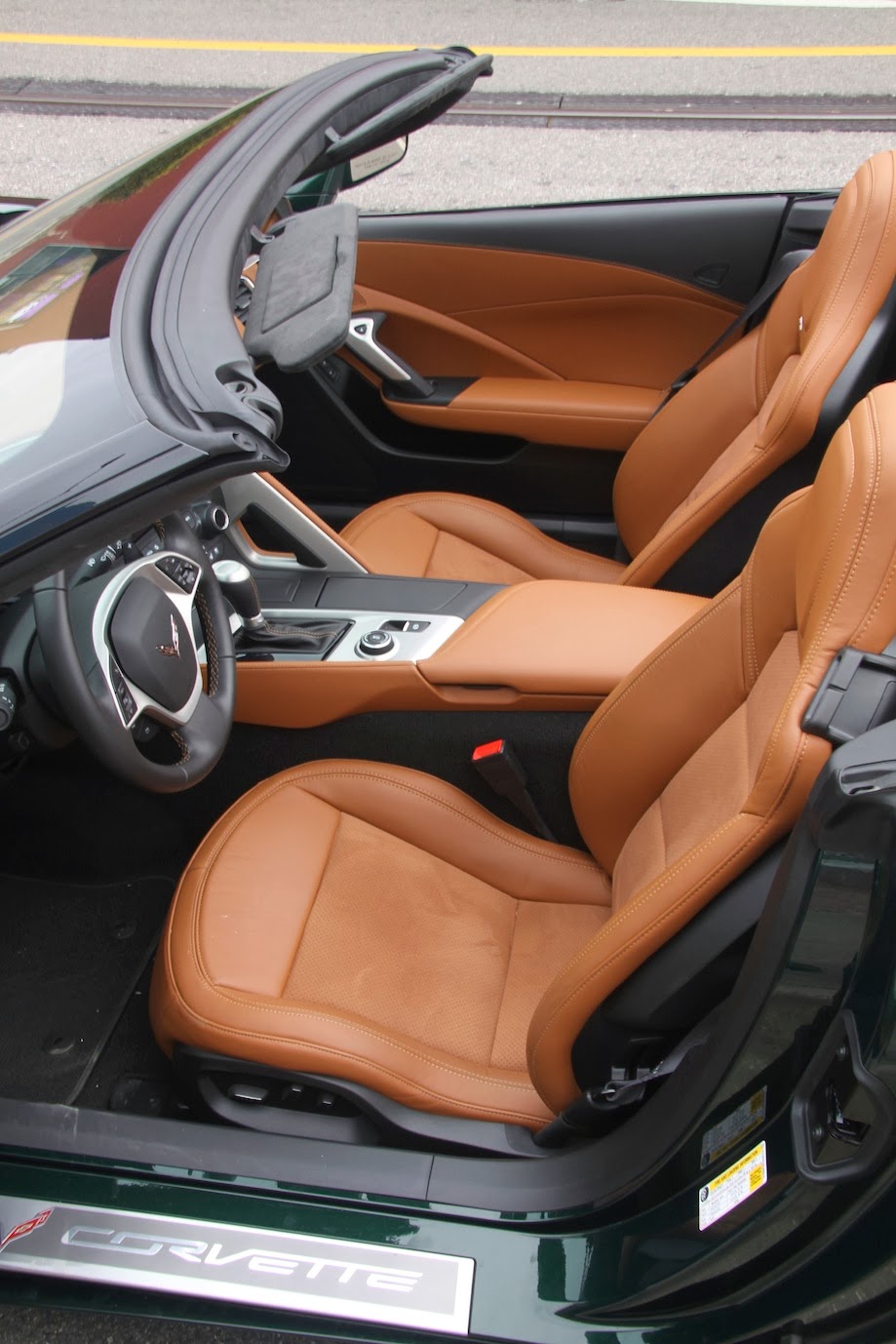 A headline in a recent edition of US News & World Report grabbed my attention like a call from the IRS. ‘Too Much Testosterone May Be Unhealthy for Older Men.’

Trust me that is not the kind of thing you want to read when you have a ‘14 Corvette Stingray Convertible sitting in your driveway. Here is a car that oozes undiluted testosterone from its every pore. The locker-room at Florida State; Dwayne ‘The Rock’ Johnson after pumping iron; Stallone in his prime. Nothing comes close to matching the automotive six-pack this seventh-generation Corvette delivers.

Want tailpipes? There’s a quartet of them, each the girth of the big-bass organ pipes at Notre Dame. And each capable of emitting the thundering basso-profundo soundtrack of James Earl Jones as the voice of God!

Want thrust? Prepare to be slammed from rest to 60 in just 3.8 seconds – that’s fast, crazy-fast – while at the same time flambé-ing enough rubber to shut down The City of Angels with a smog alert. And for fresh air lovers, creating a convertible version of this magical machine only heightens its wonderment and lust. 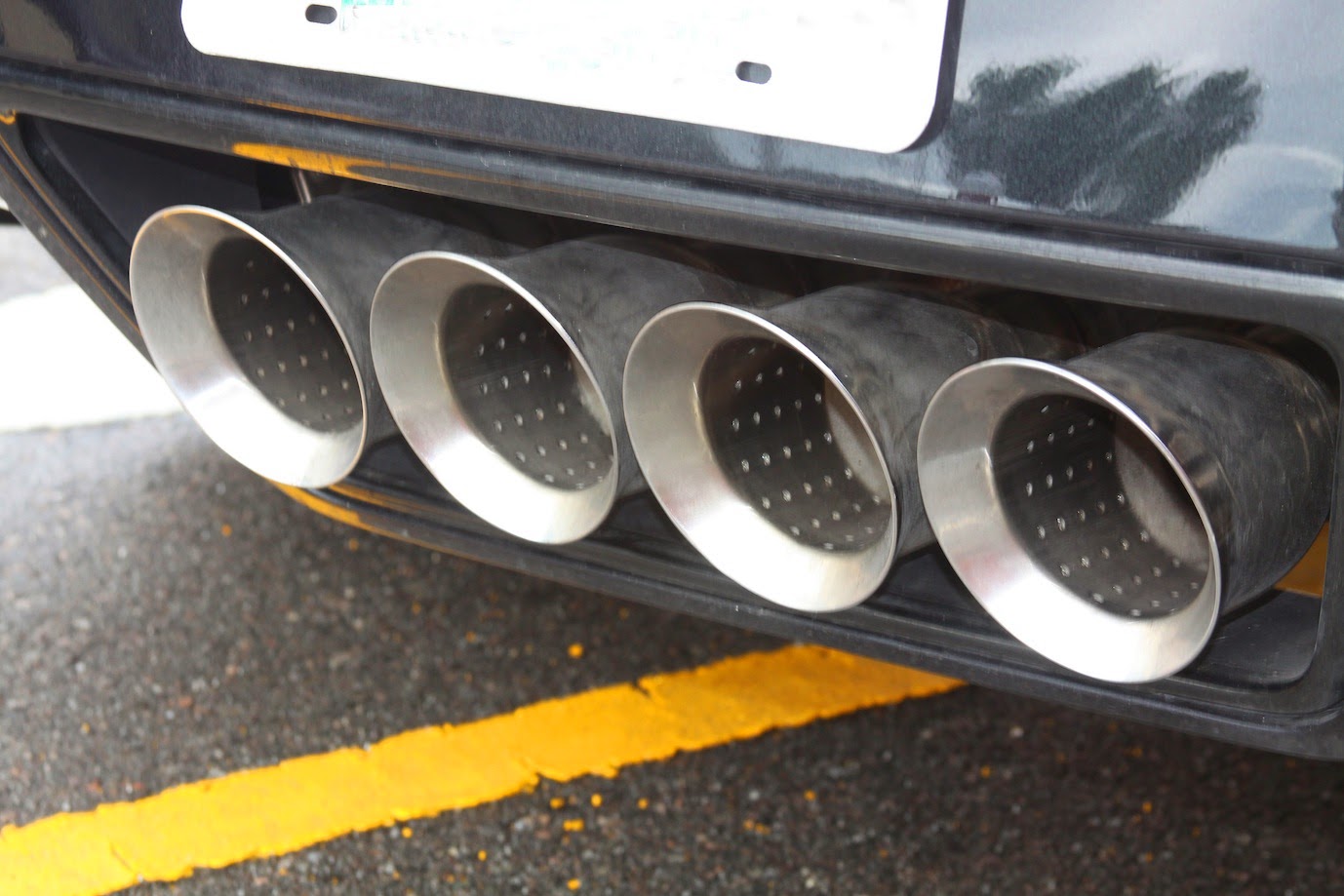 What a first-rate job Chevy engineers have done in creating this new ragtop. At the push of a single button, the canvas lid automatically unlatches and glides into a well behind the seats. Start to finish a mere 20 seconds. And you can drop the top at speeds up to 30 mph. With the top raised, there’s not a rustle of wind noise. And through the car wash – yep, I tried it – not a single drop of water came into the cabin. 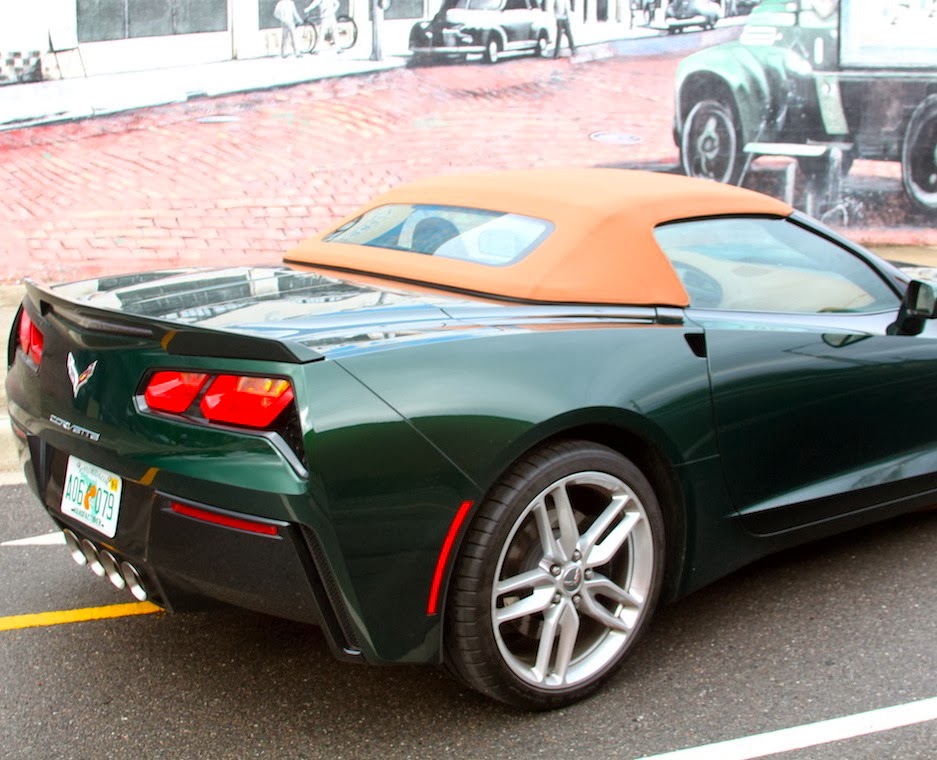 At the convertible’s core is an all-new, glued-and-welded aluminum chassis that’s 100 pounds lighter than the steel frame of the previous C6 Corvette and stiffer than a guard outside Buckingham Palace. This kind of torsional rigidity helps heighten the delicacy and precision of the car’s electric-assist steering. Now there’s so much feedback to your fingertips you can hit a quarter and almost tell whether its George W or the big bird you’re running over! It also further heightens the confidence and clarity of the way the car carves curves, and cures it of any shimmies or shakes. It’s now so German they should have called it the Corvette Fritz!

Of course you’d need to hot lap Daytona with Dale Jr behind the helm to discover this car’s limits of adhesion. Even on a snaking piece of mountain blacktop, the 10-inch-wide rubber out back is never going to relinquish its immense grip. Unless, that is, you hit ‘Track’ mode – one
of five adaptive driving modes – which eases control of the back end and allows you
to enjoy your inner hooligan. 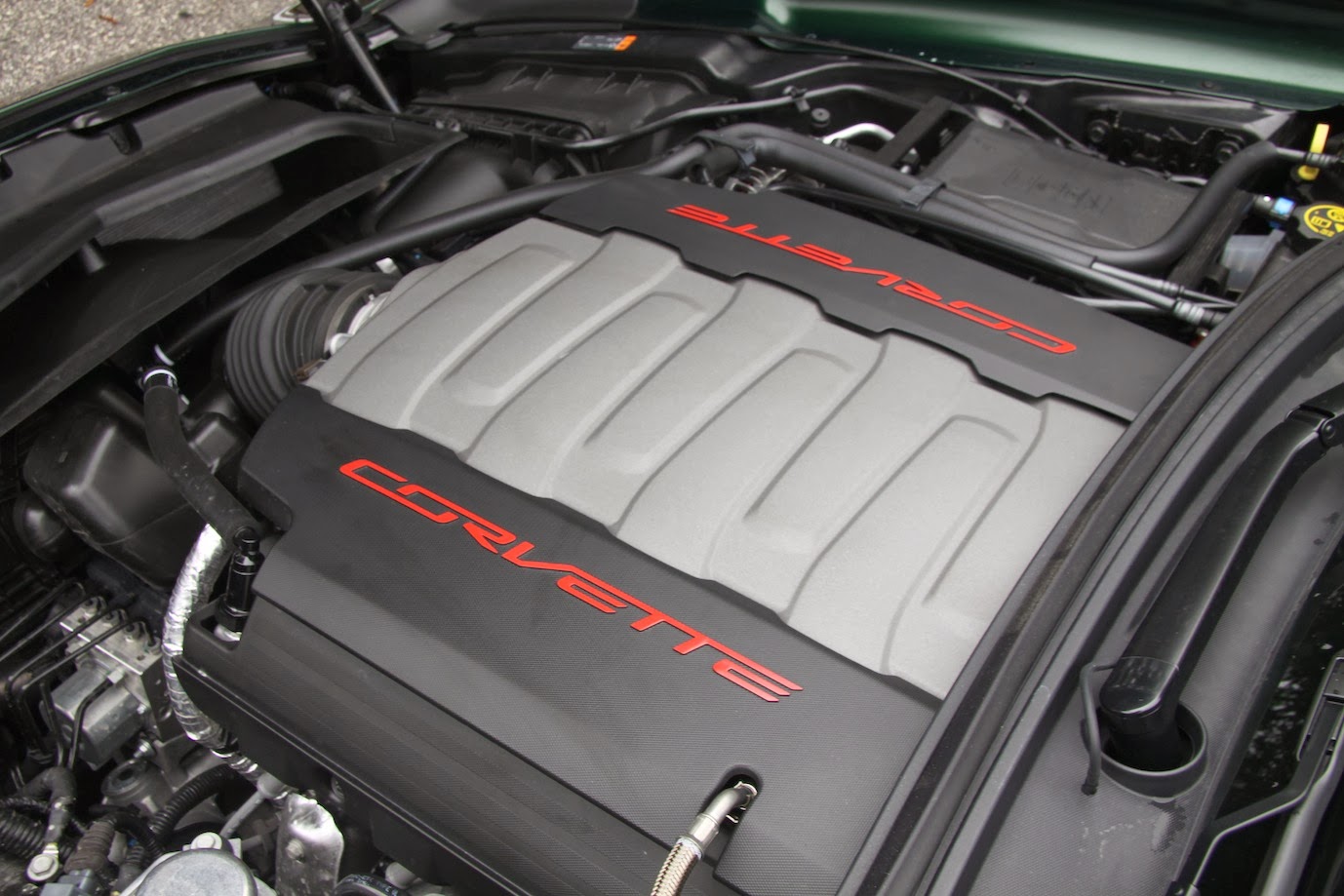 Providing the motivation for this new Kentucky Flier is the latest iteration of Chevy’s inimitable small-block V8. Direct injection and continuously variable valve timing mix with old-tech pushrods to crank out 460 horses and 465 pound-feet of muscly torque from this 6.2-liter LT1 powerhouse. Not that you buy a Corvette for econobox-like fuel economy, but Al Gore would approve of the V8 being able to shut down four of its cylinders on light throttle to return an econobox-like 29 to the gallon on the highway. A four-cylinder Corvette; that’s a first.

Chose between a six-speed automatic with paddle-shifters, and an all-new seven-speed stick with ‘Active Rev Matching’ that blips the throttle on downshifts. Either way you’ll have a blast. 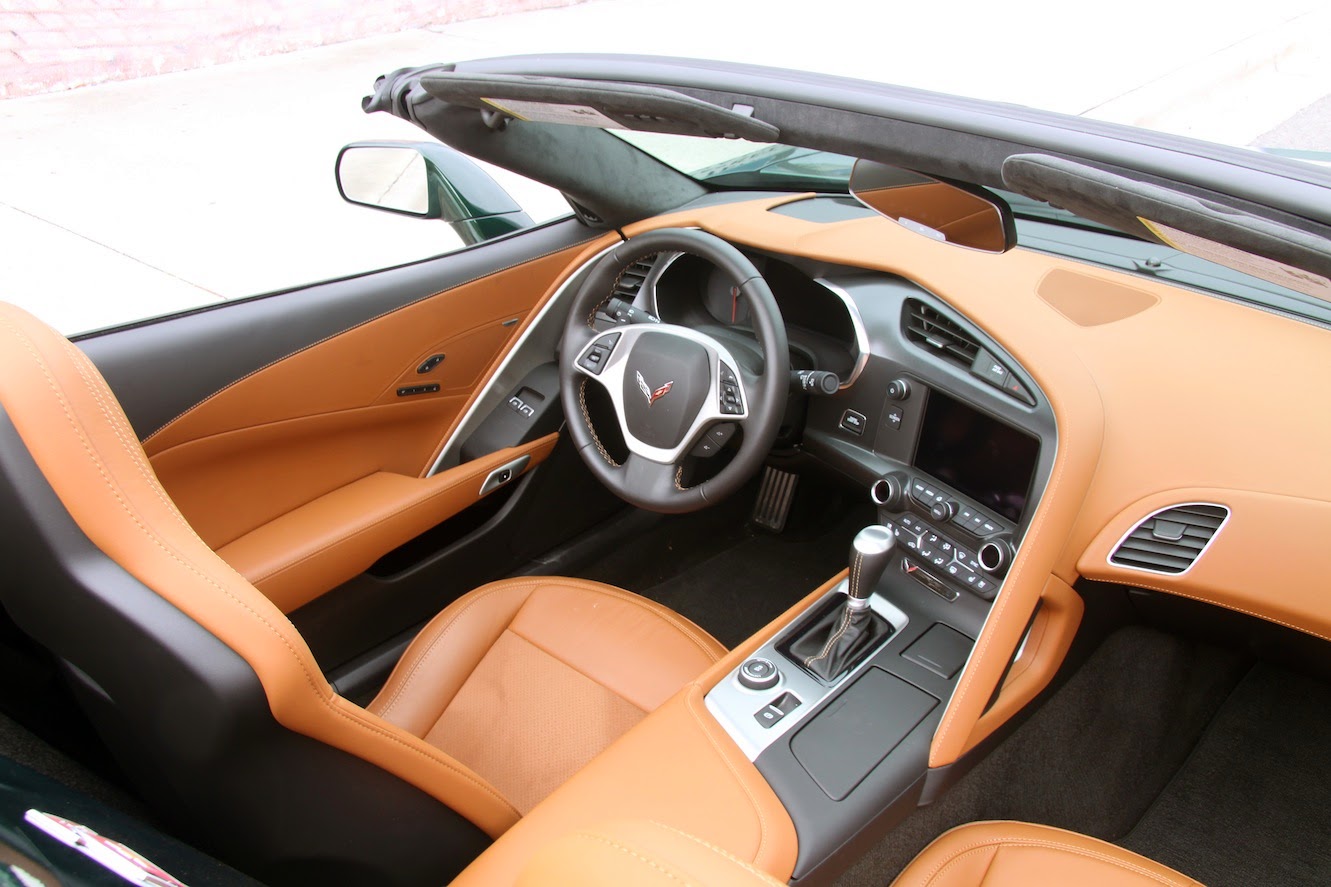 Yet the true icing on the chocolate cake is the interior. After six generations of interior Playskool-plastic awfulness, this is a revelation. The cabin is now awash in butter-smooth leather with classy contrast stitching, leather on the dash, and soft-to-the-touch, nicely textured plastics. And the new seats are a body-hugging revelation. 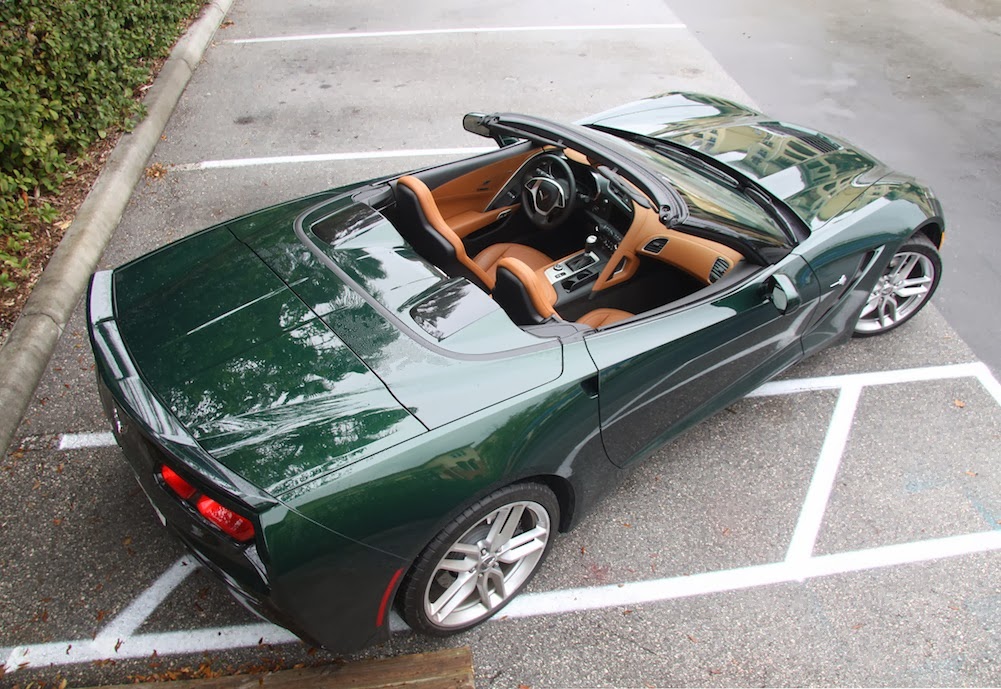 Here is without doubt the performance bargain of the decade. A base, yet still superbly-equipped 1LT Stingray convertible will set you back just $58,800 which is just $5-grand more than the coupe. Don’t add the frills? A base convertible can be had for just $56k. Amazing.

As for that testosterone issue, if you experience enjoyment lasting longer than four hours, you can always turn off the motor!