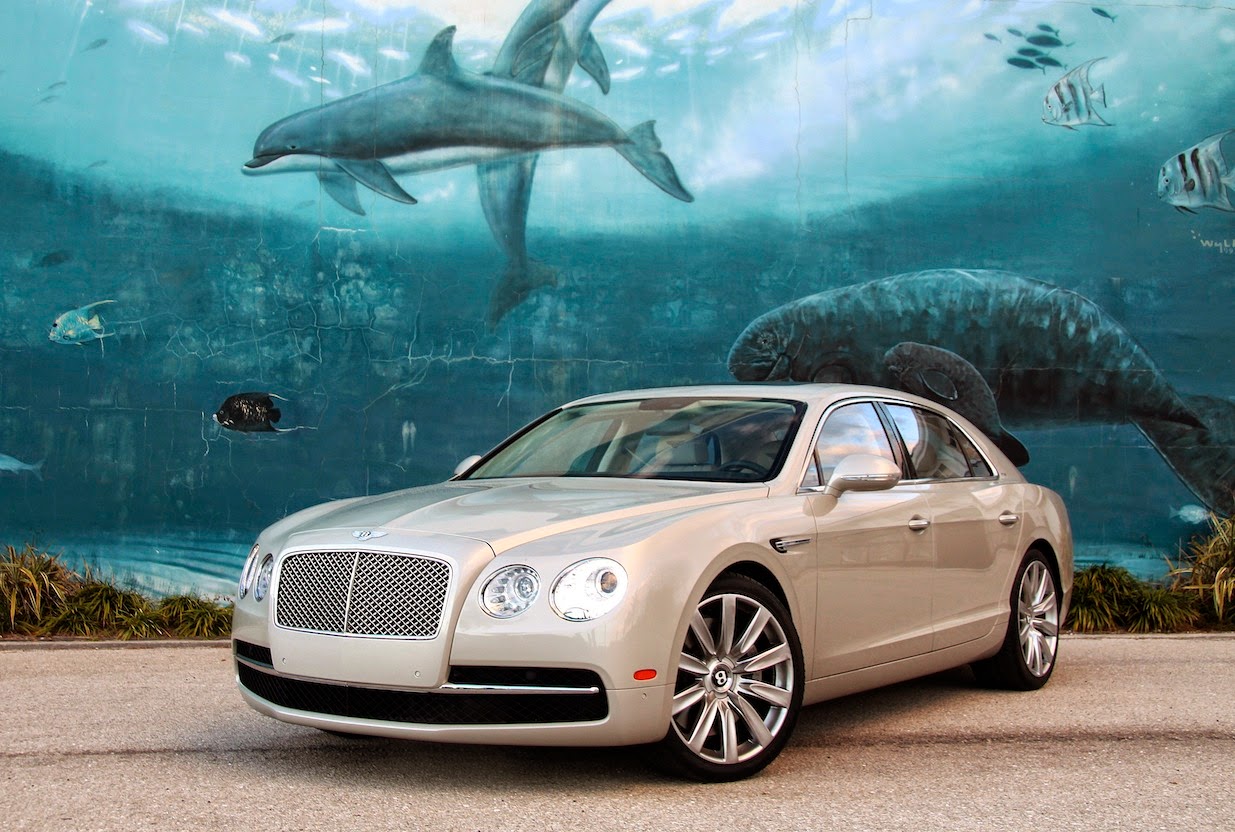 Want to know what a new Bentley Flying Spur sounds like at 80 mph on the Interstate? Stop by your local bank and ask ever-so-nicely if they’ll open their vault so you can sit inside for a few minutes. With the door closed! This car is quieter than Jean Dujardin in The Artist. Quieter than a Broncos fan during Super Bowl. Quieter than Hugh Grant on The Tonight Show when Leno asked, “What were you thinking?” Yes, the last-generation Flying Spur was a pretty hushed machine. But this newest version is quite simply the automotive equivalent of a Black Hole! 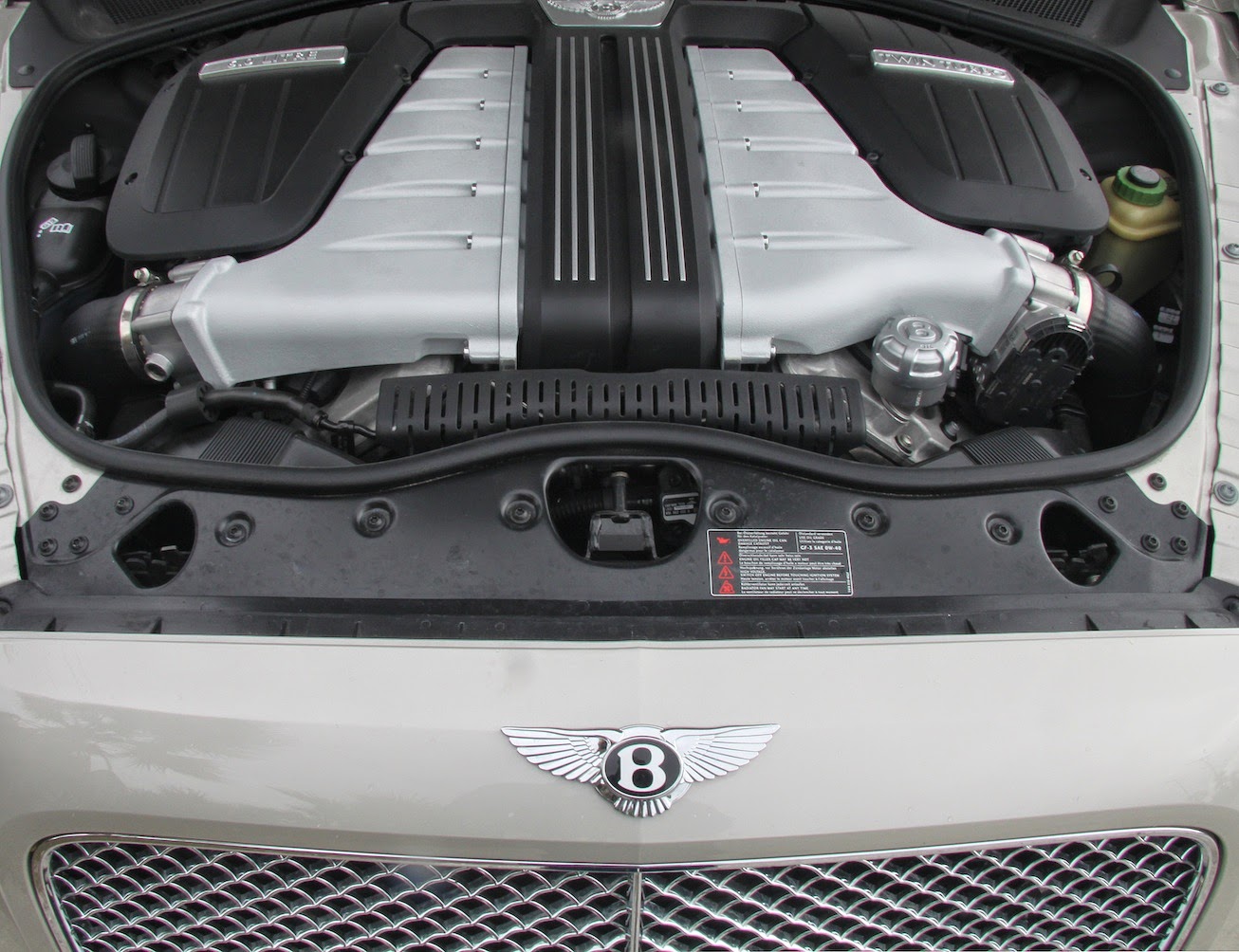 The focus by Bentley’s engineers on suppressing any extraneous noises – like the thrum from that 6.0-liter twin-turbo 12-cylinder powerplant and those humongous 21-inch tires – was nothing short of obsessive. They developed special lightweight acoustic under-floor panels to snuff-out road noise. They specified triple-layer glass for the windows, featuring a thick, noise-deadening middle layer. They lined the inside of the doors with the equivalent of English Yorkshire pudding!

And the result? An impressive 40 percent reduction in noise, according to Bentley. Now it’s like sitting inside a pair of Bose noise-canceling headphones. At idle, the complete absence of sound is spooky. I lost count of the times, sitting at a stop light, I’d ask myself – silently, of course – Is it running? 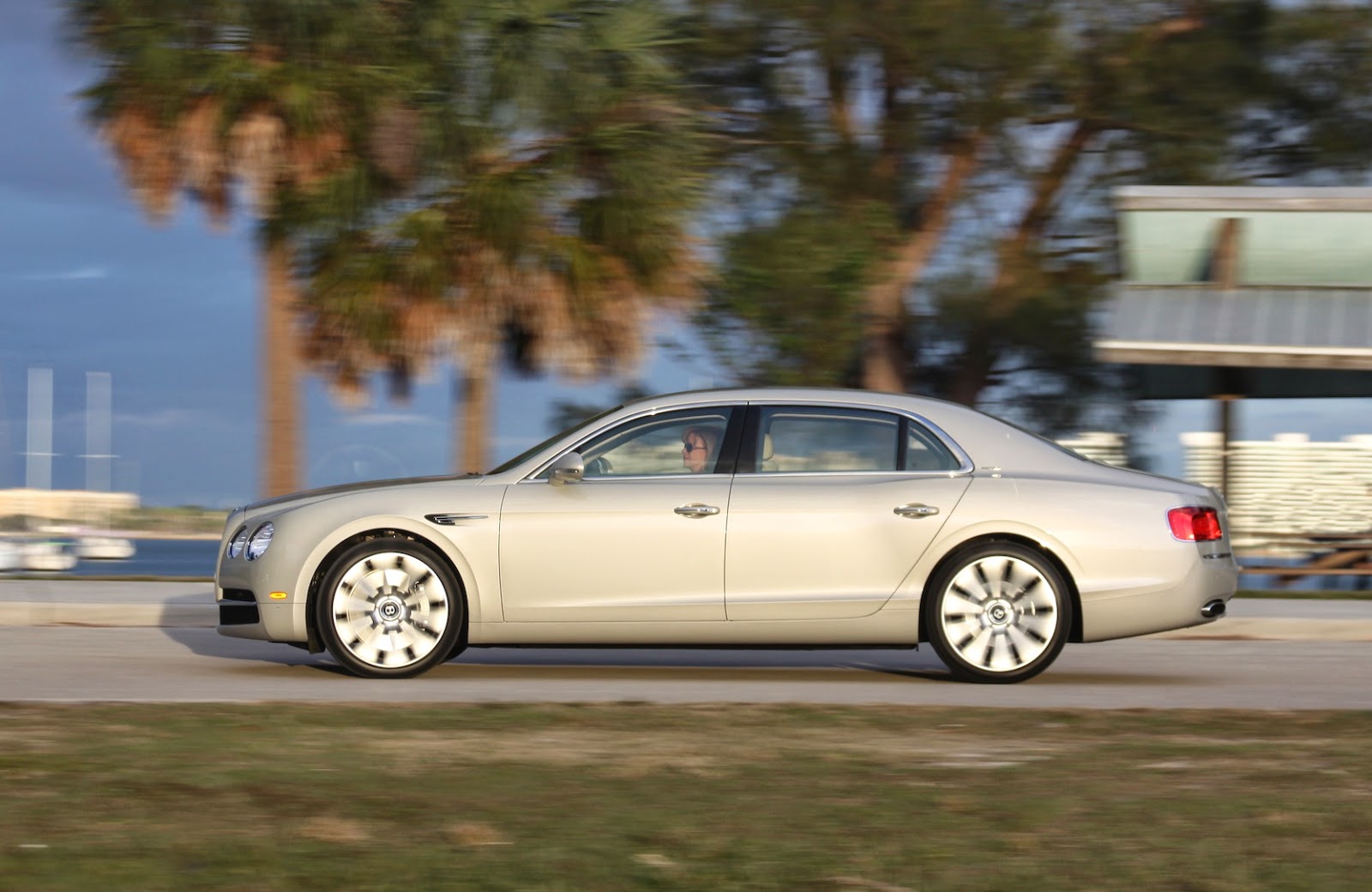 Refinement and comfort is certainly the new focus with this latest Spur. While the previous model was essentially a four-door version of the sporty, two-door Continental GT coupe, this new model trades a little dynamic agility for interior calm and comfort. Which accounts for it no longer being: Continental Flying Spur. Just Flying Spur.

And it’s not just all about aural change either. The Spur rides smoother and more luxuriously too, courtesy of  pillowy springs and softer anti-roll bars. Twenty-five percent softer suspension bushings also do a fine job of suppressing road noise & vibration. 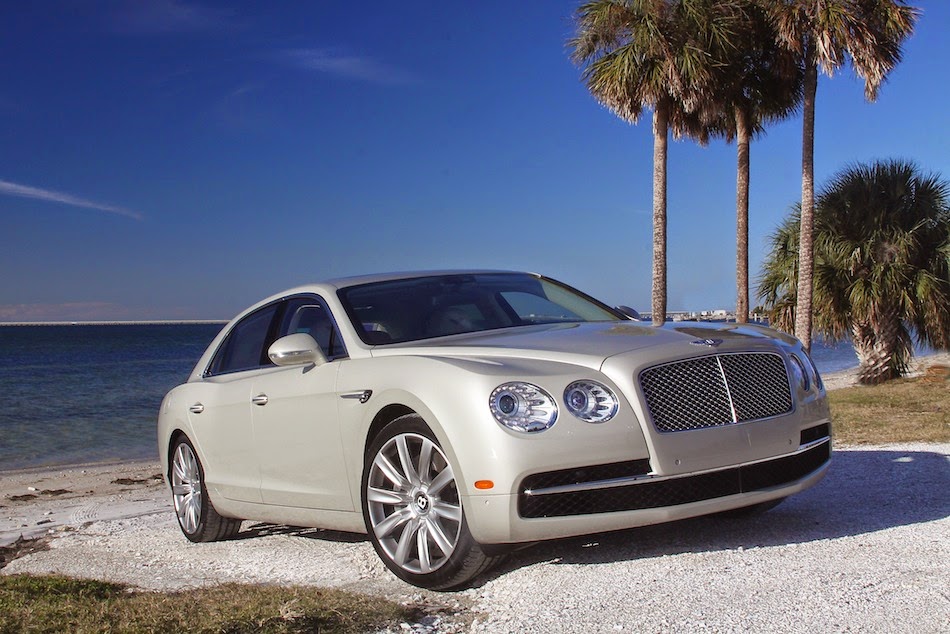 But that’s not to say the car has morphed into a modern-day equivalent of a 1950s Buick Roadmaster, wobbling and wallowing down the highway. Now the driver can chose between four noticeably different settings for the car’s air suspension, from magic carpet Comfort to reduced-roll Sport. In Sport mode, coupled with the car’s firm, nicely weighted hydraulically assisted steering, the Spur will sweep majestically around curves as if running on invisible rails.

And the sheer outpouring of Hoover Dam-like power from that massive 616-horsepower reactor under that mile-long hood is beyond breathtaking. 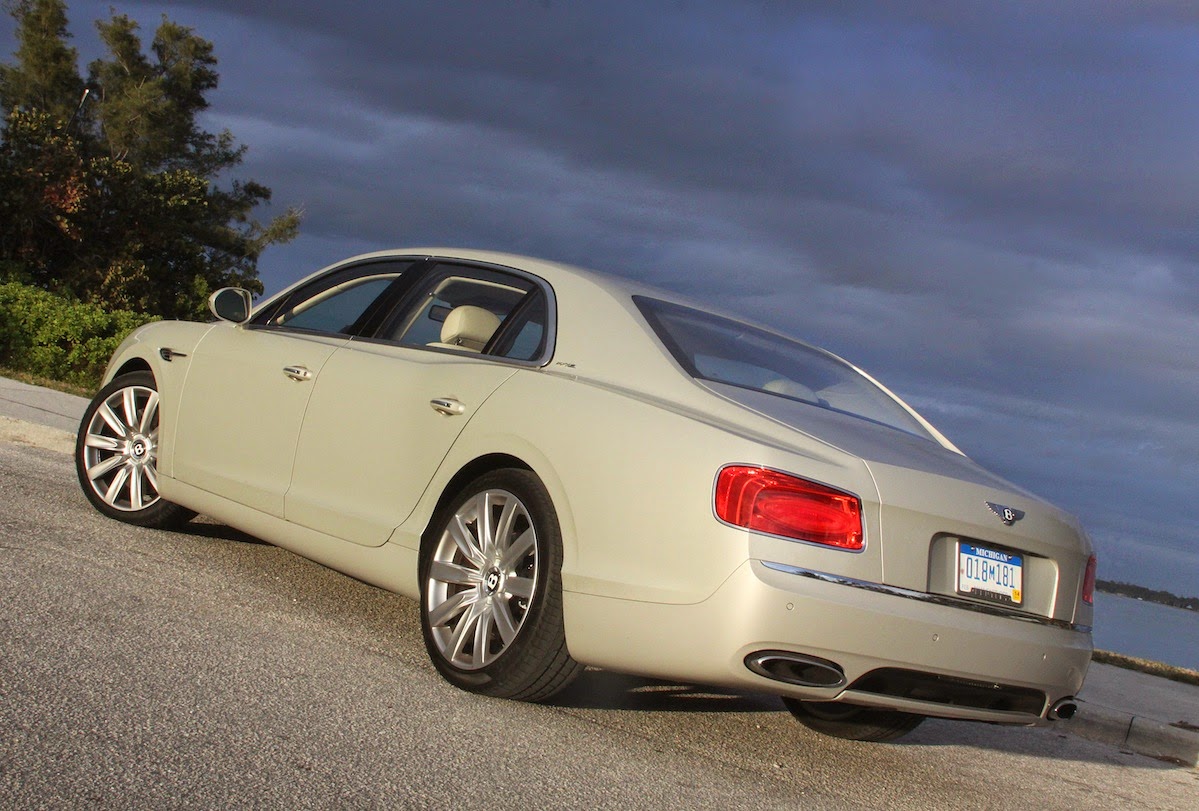 Foot to floor, this 5,400-pound leviathan can scythe to 60 mph in a mere 4.3 seconds, it’s
all-wheel drive system ensuring every one of those 590 torques gets channeled straight to the blacktop without a hint of wheelspin.

The car’s mind-number performance and refinement is heightened by the new eight-speed ZF automatic transmission, which replaces the previous six-speeder. Shifts now take place in a mere 200 milliseconds and are just seamless and imperceptible. 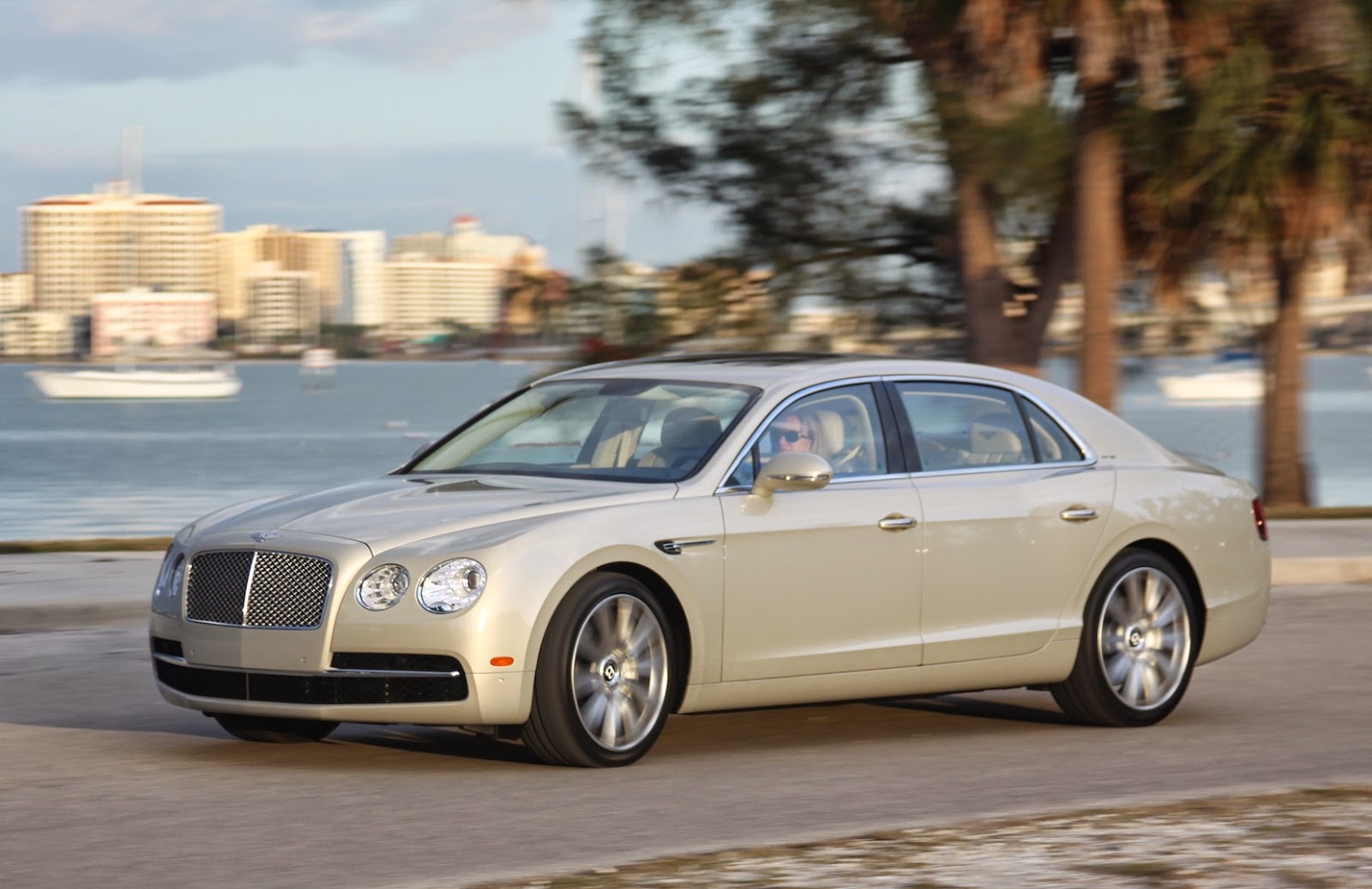 Thankfully this 208.5-inch limousine has phenomenal stoppers, shedding speed with the immediacy of throwing a ship’s anchor out of the back! 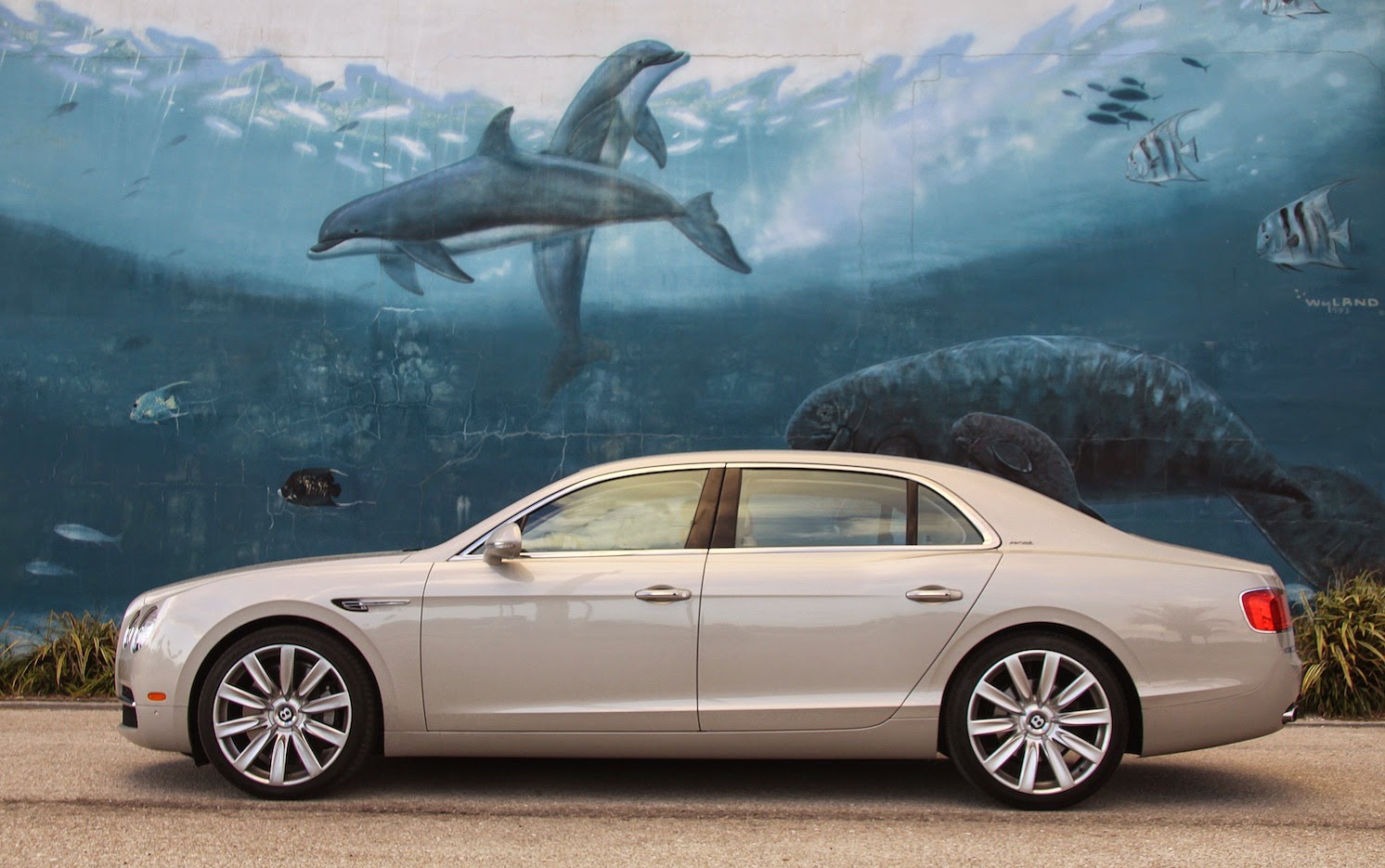 See the new Flying Spur in the metal and its beauty is overwhelming. Whereas the previous model had all the visual appeal of a block of whale blubber, this oozes, style, elegance and curb appeal. I adore the high waist and swooping roofline, but really do wish they could make the wire mesh front grilles out of real wire instead of shiny plastic. 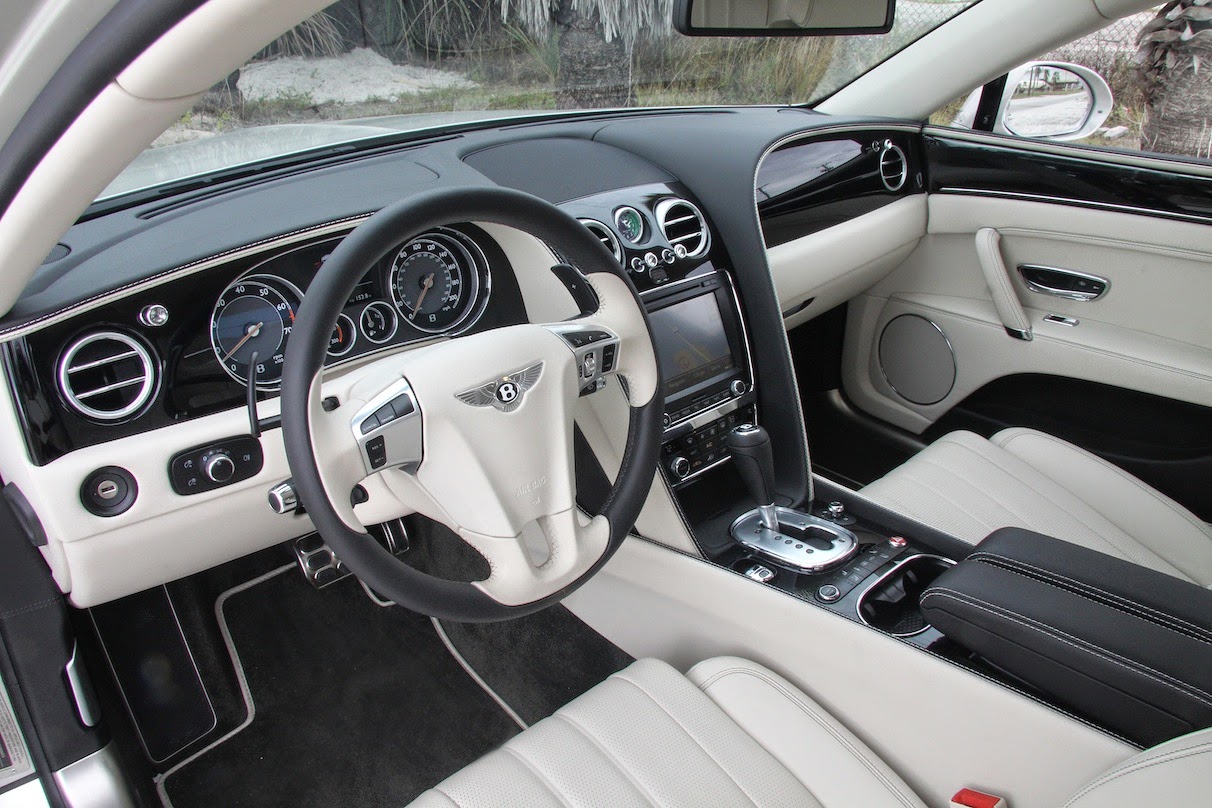 Inside, the cabin is the usual Bentley magnificence of artisan-crafted leatherwork and flawless woodwork. Luxuriating in the back seat, legs stretched and crossed, uncorking bubbly from the optional chiller behind the center armrest, and life does not get better. 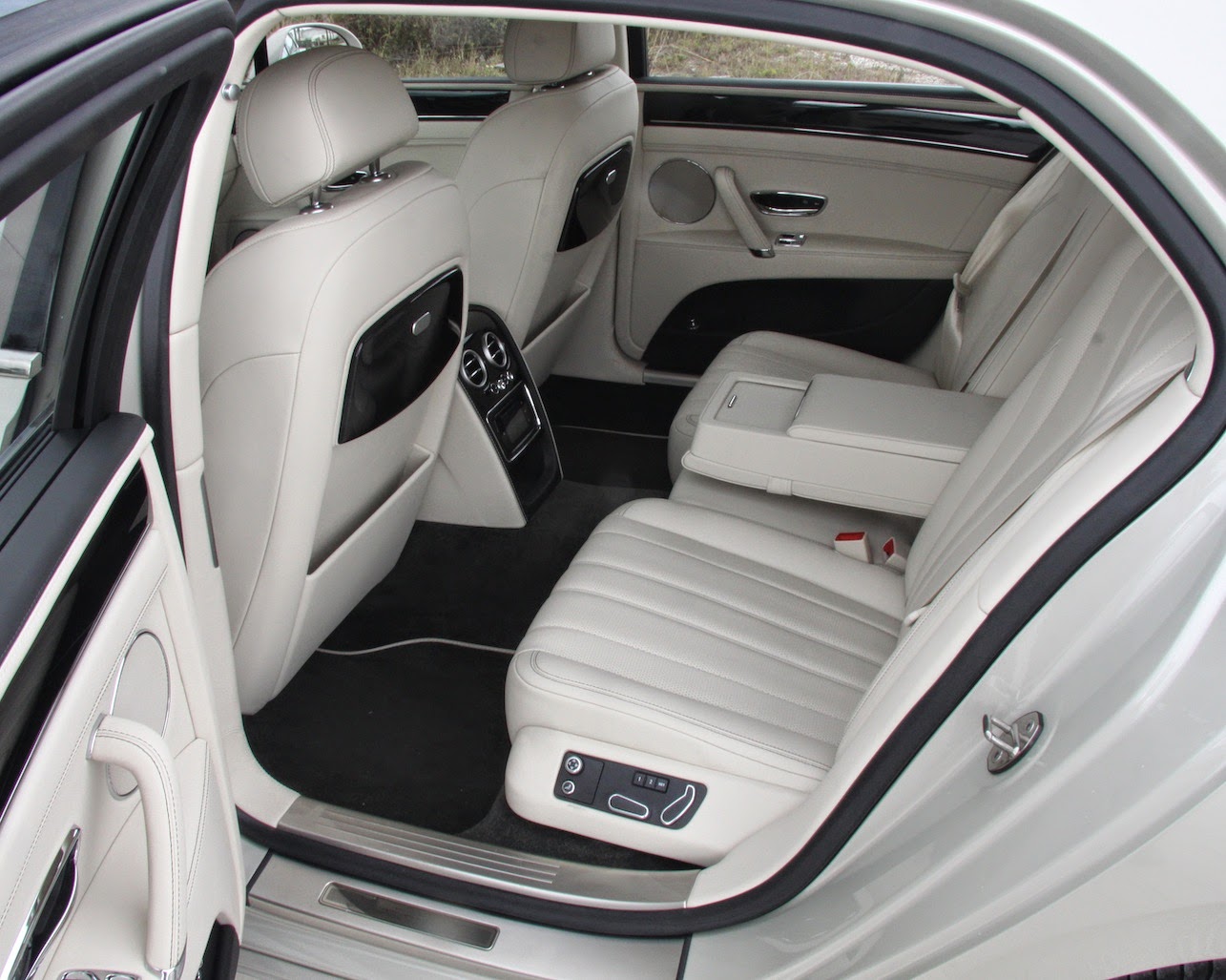 All this hedonistic luxury will set you back $200,500, or around $220,000 with delivery, gas-guzzler tax and a few choice extras, like those $800 must-have lambs wool rugs. Maybe, while you’re in the bank vault experiencing the silence, you might grab a few samples to pay for your new Flying Spur. On second thought!

For more information about the latest from Bentley, please visit
http://www.newflyingspur.bentleymotors.com/en