We asked CGC West Coast contributor Jim Palam to scoot up to the Quail Lodge & Golf Club in Carmel, CA and bring back a special two-wheel report for the 12TH ANNUAL QUAIL MOTORCYCLE GATHERING, the return of two-wheel splendor to the grass of Carmel Valley. Mission accomplished! 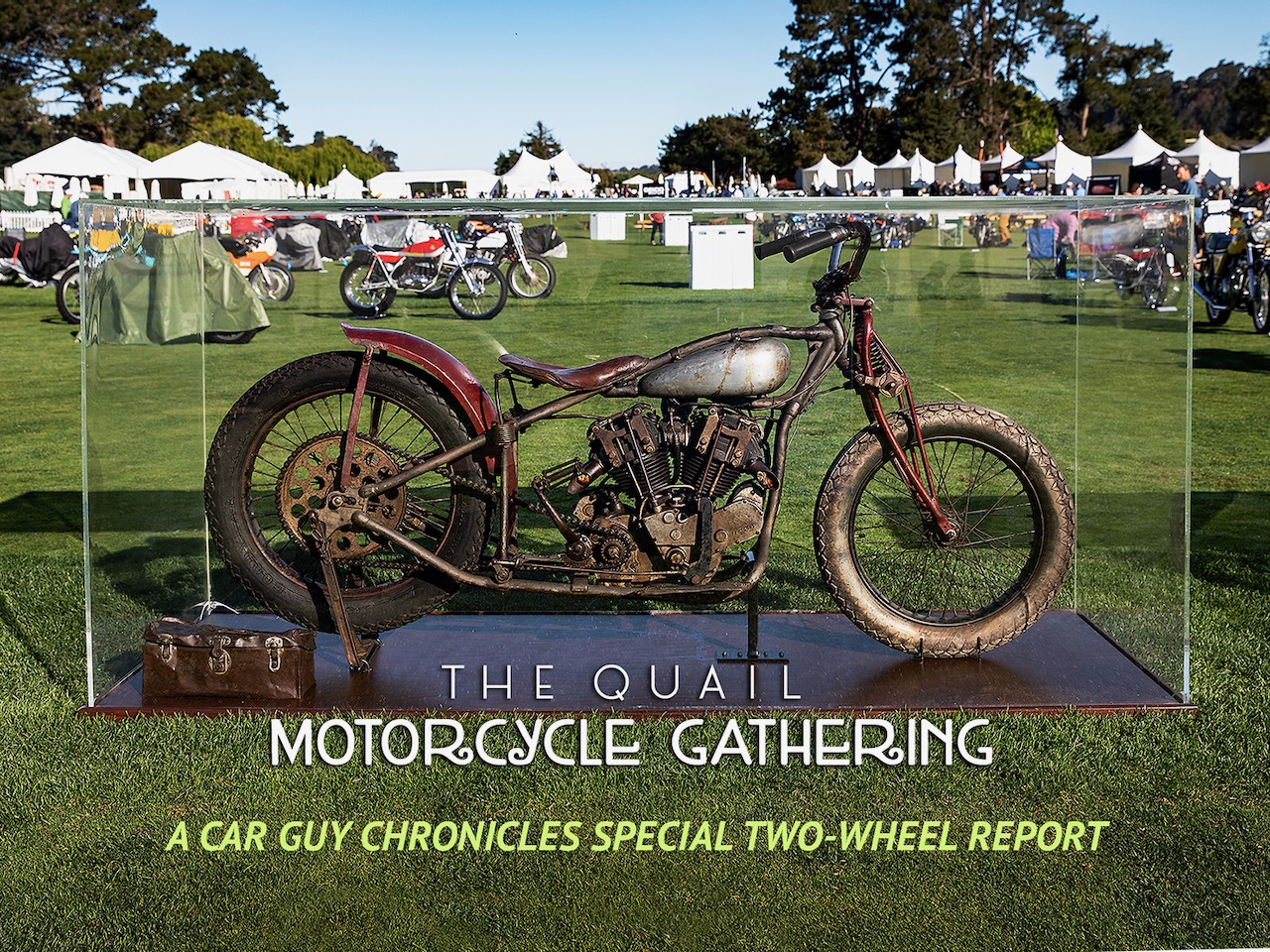 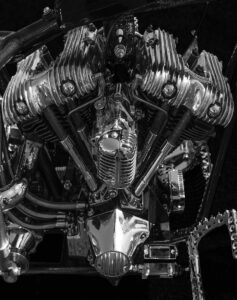 It was Friday-the-13th when I drove past Valhalla Drive in Solvang. I was on my way North to cover the 12TH ANNUAL QUAIL MOTORCYCLE GATHERING in Carmel, after the show was put on-hold for a two-year hiatus thanks to Covid. For a moment I couldn’t escape the irony that according to folklore, Valhalla was where the 13 Norse gods were having a death-arrow dinner party and the superstition of Friday-the-13th originated.

This harbinger of bad luck quickly faded when I reached Carmel Valley Road, turned into the bucolic setting of the Quail Lodge and headed onto the manicured show area where they were beginning to set up for Saturday’s much anticipated event. I thought how good my fortunes actually were as I watched some of the best bikes in motorcycling history being carefully rolled off their trailers and moved onto the beautiful show field. This was going to be special.

By noon on Saturday some 3,200 motorcycle enthusiasts from around the world had gathered to enjoy The Quail’s events – which included the display of 250 iconic motorcycles from the last 100+ years, appearances by icons of motorcycling history and design, vendor tents, a silent auction – and tasty offerings of unique foods and beverages. Judged motorcycle classes included British, Italian, Other European, Japanese, Competition On-Road, Competition Off-Road, Antique, Custom/Modified and Choppers.

Special thanks as always to Gordon McCall, Director of Motorsports for The Peninsula Signature Events, the hard-working event crews, presenter GEICO Motorcycle – and of course all the owners, builders and restoration experts who put endless hours and resources into making The Quail Motorcycle Gathering one of the best, two-wheel show events in the world. I’m already looking forward to 2023! 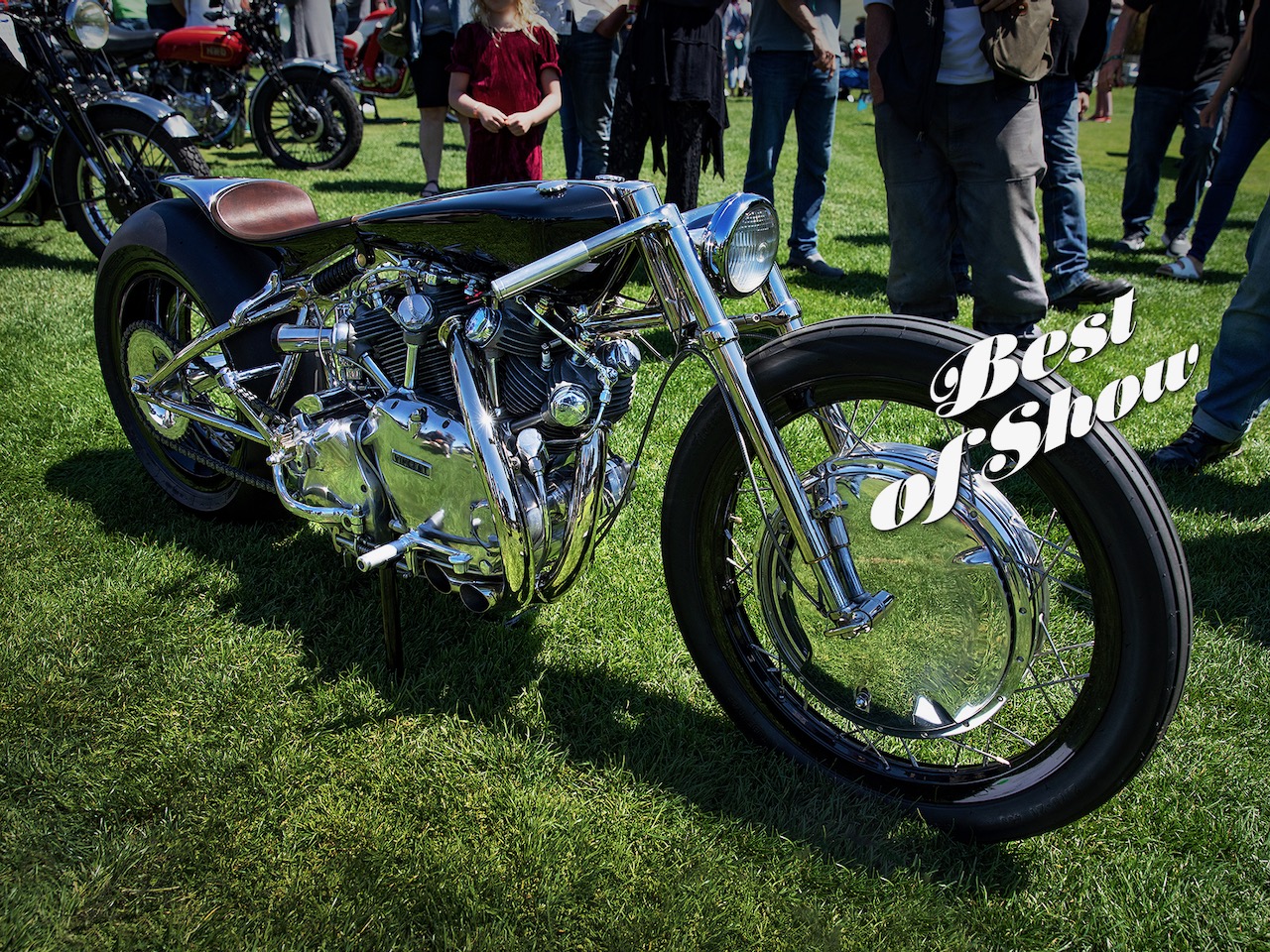 Mat Hazan ‘s stiletto-shape, custom ‘51 Vincent Rapide took not only the “Best of Show” honors, but also the “Design & Style” award. Now many would argue that the Rapide – or any Vincent for that matter – is already a fully-realized and strikingly-beautiful motorcycle, and that altering it in any way is sacrilegious. But Mat’s fabrication skills and customization visions are quite possibly heaven-sent and arguably beyond reproach. 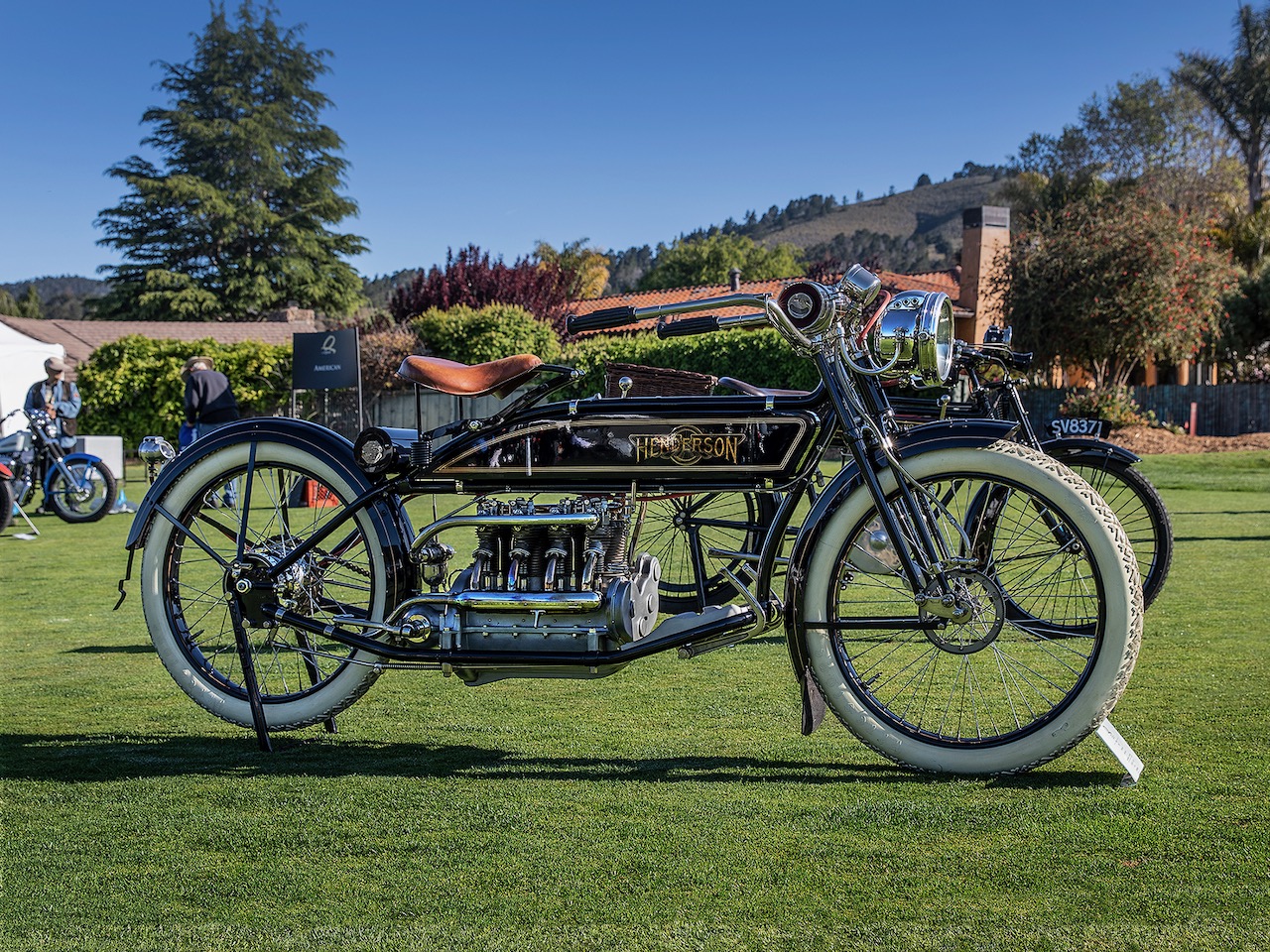 This spectacular ‘15 Henderson “Long Tank” may look like a stretch of the imagination, but it was actually shortened six inches during its restoration. In its unmolested configuration this Henderson would have had a 65-inch (axle-to-axle) wheelbase. I was lucky to grab photos of this Machine Age classic on set-up day, because it didn’t take long for the Henderson to fade from view thanks to an ever-present wall of admires on show day. The Long Tank was on the judges short list, as it earned 2nd Place honors in the Antique class. 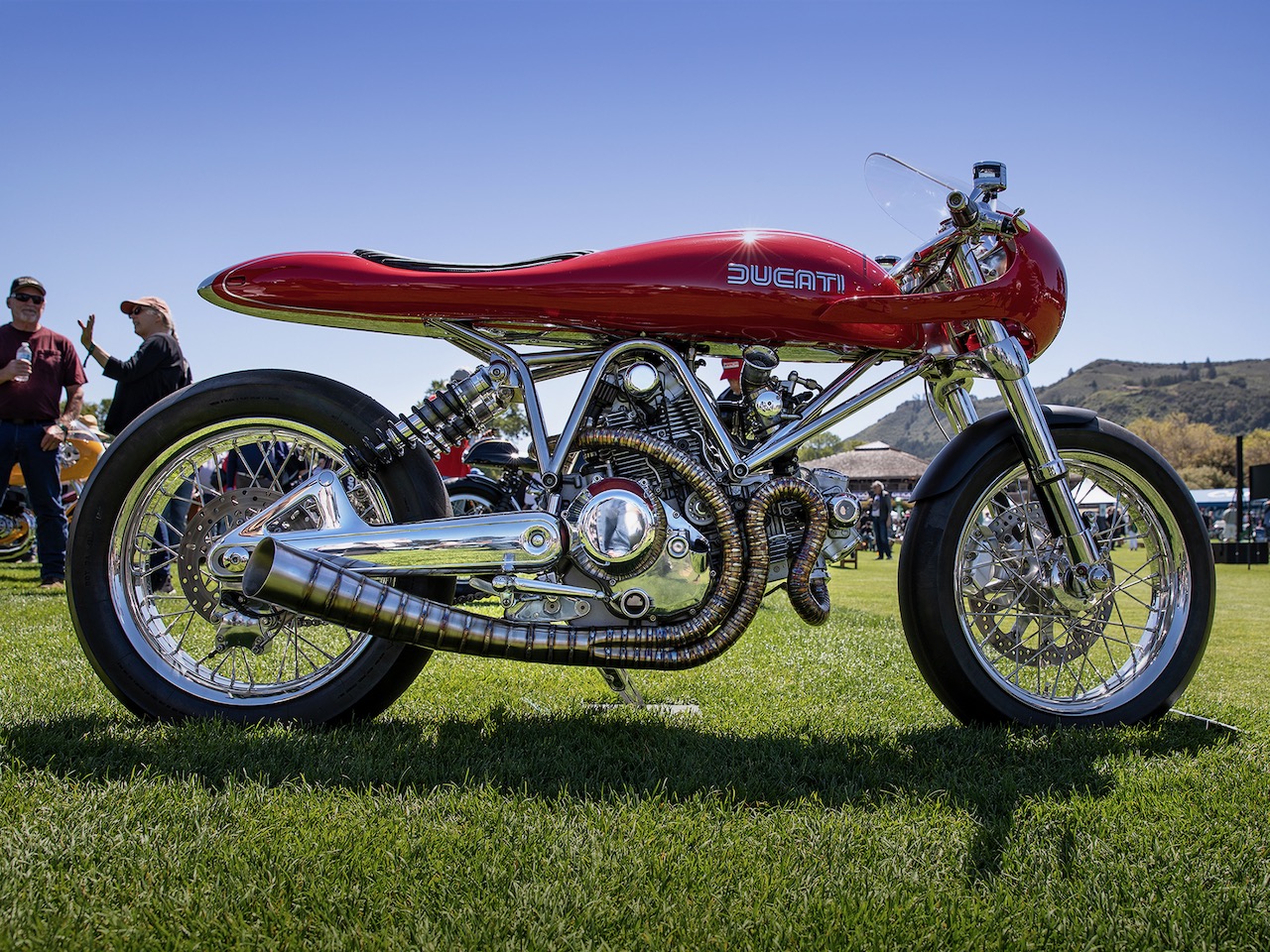 The ‘06 Ducati Fuse from Revival Cycles of Austin Texas and designer Ed Boyd burned its way into the hearts of the judges, winning AMA Motorcycle Hall of Fame Heritage Award. The Fuse started as a Ducati Monster with an 1,100cc motor. There are few parts, if any, that weren’t custom made by the artisans at Revival. I regret not dragging a ladder along to grab a bird’s eye view of this tapered red rocket. It’s from above that its unique shape truly astounds. 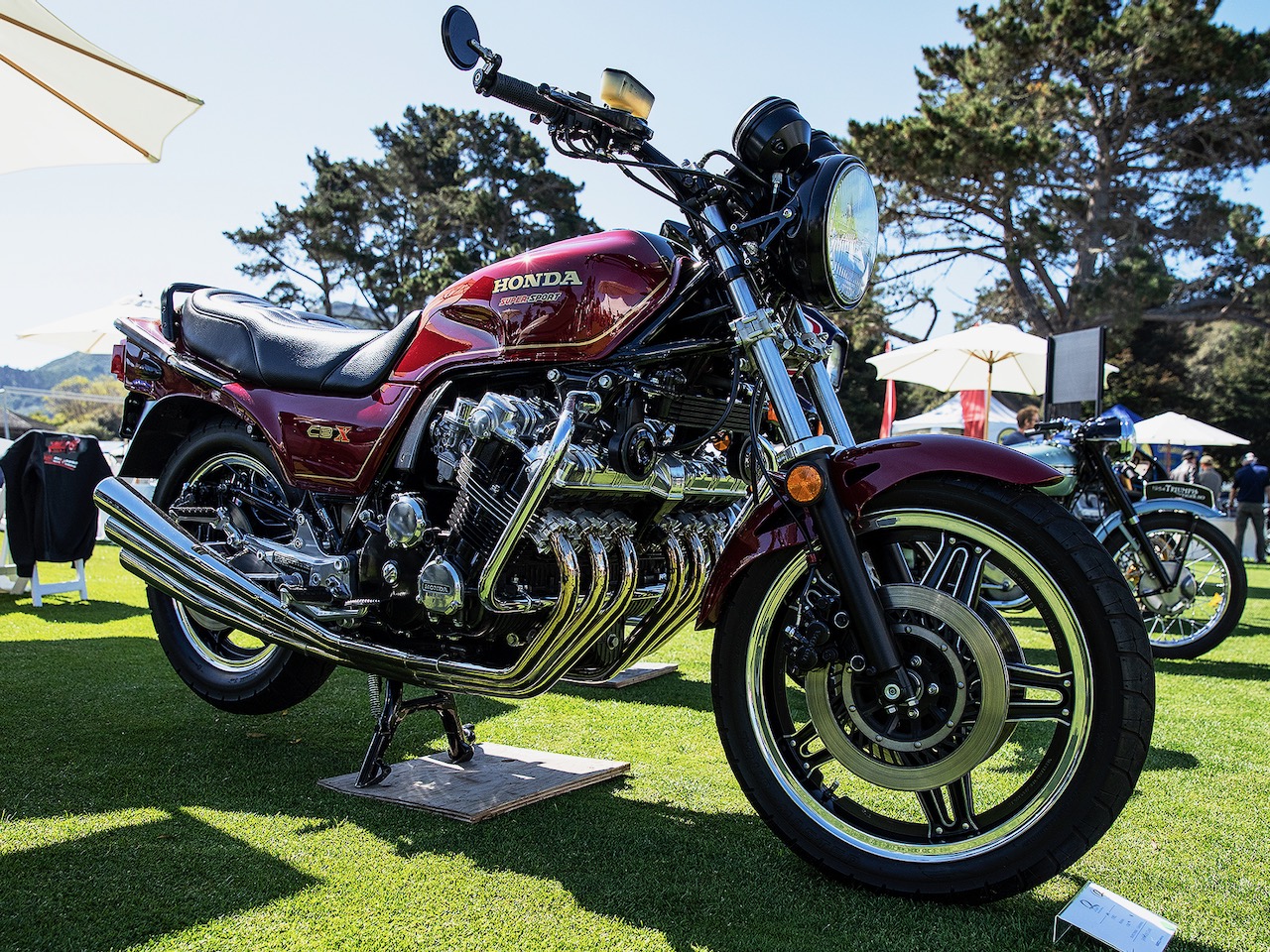 There was intense competition in the Japanese Class as there was an impressive turnout from the Honda collectors and enthusiasts – in addition to a strong showing of Suzukis, Kawasakis and Yamahas. Perhaps it was because my very first motorcycle was a ’73 inline-four CB500 that this ’82 Honda CBX Super Sport from Scott Steel’s collection got my heart pumping and my camera clicking. With six cylinders, six carburetors, 24 valves, two overhead camshafts, 100 horsepower and two upswept-3-stacks of chromed exhausts blasting chasers from behind, the CBX in its 1982 configuration was an unfortunately short-lived and pricey Sport-Touring experiment. It sold for $5,600 before taxes and fees. 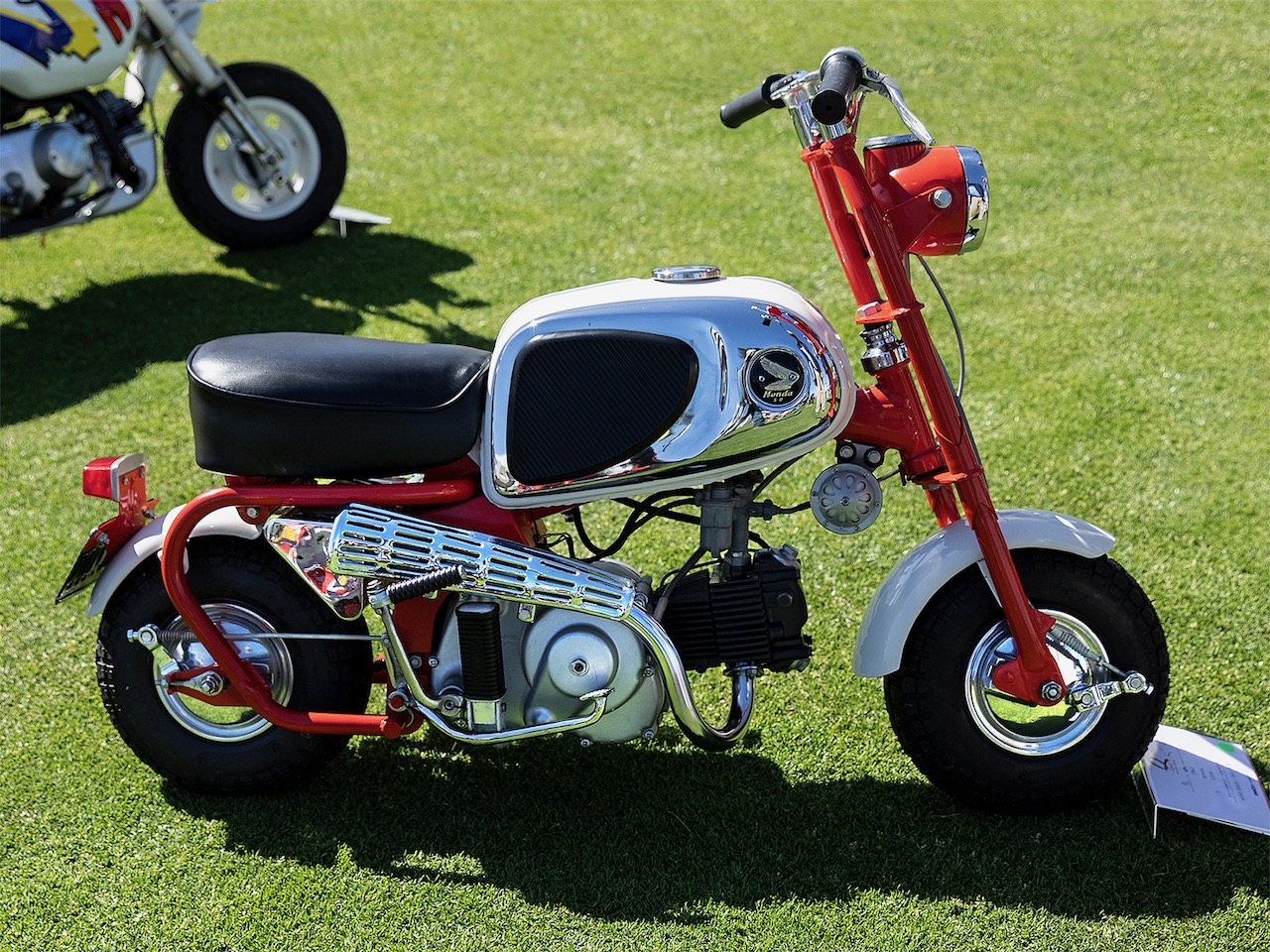 Now this is BIG! Originally presented in 1961 as an attraction at Honda’s Tama Tech amusement park in Hino, Japan, this tiny bike quickly garnered praise and press – so in 1963 Honda began mass production of a street-legal Honda CZ100 Mark I Minibike. It was outfitted with a 49cc motor, a 3-speed semi-automatic transmission, 5 inch wheels, a white and chrome tank and bright red frame. The CZ100 was only available in European and Asian countries. Thanks to Joe Carrillo for bringing this rare icon to The Quail. 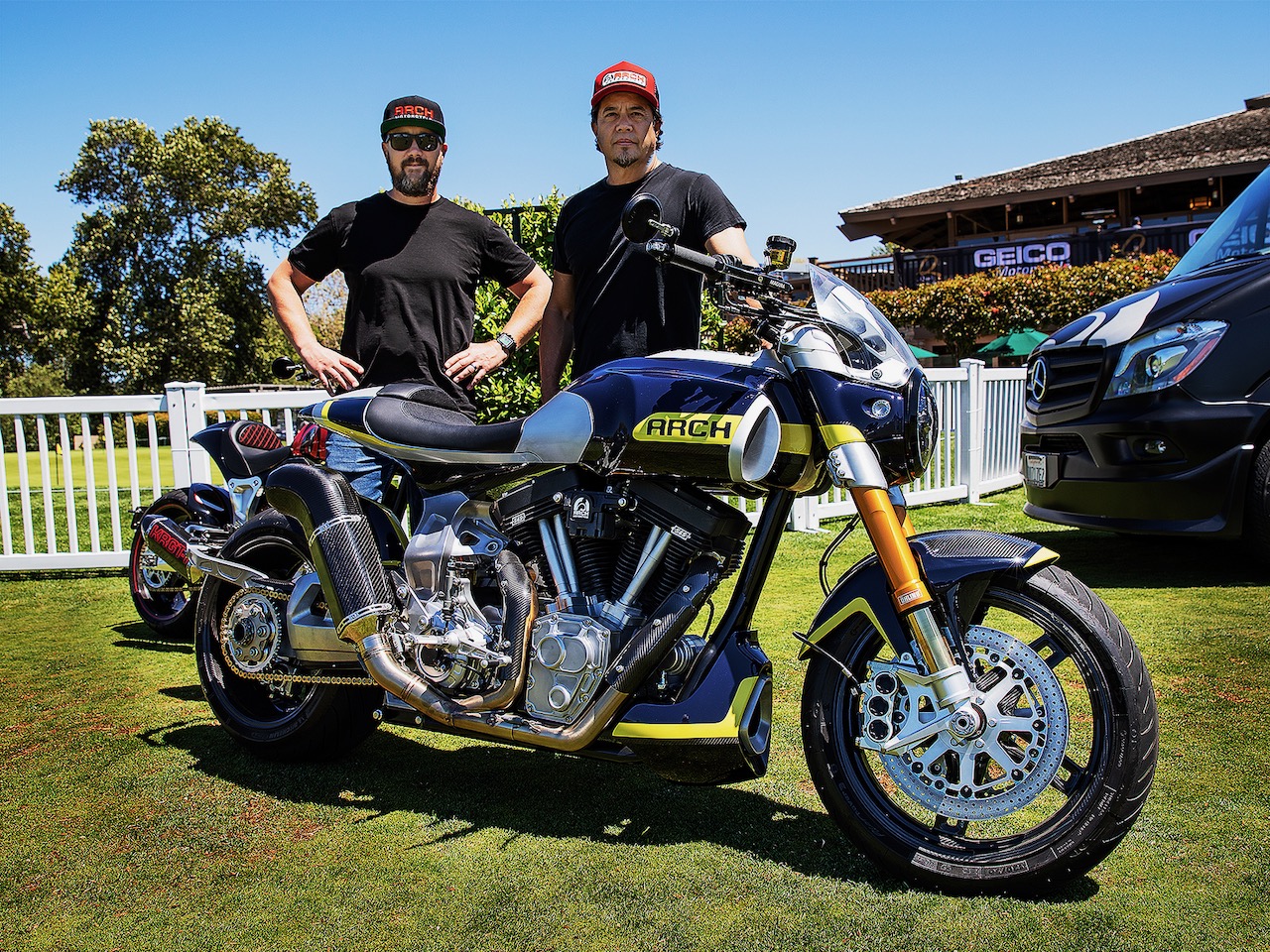 It’s been over ten years now since ARCH Motorcycle Company co-founders Keanu Reeves and Gard Hollinger took their shared dream of building a sleek and powerful bespoke motorcycle of unbeatable quality from idle chatter to high-revving, head-snappin’ actuality. I had the pleasure of spending a little time with Gard– pictured here on the right – and his company’s Client & Communication Manager Jordan Mastagni as they indulged my set-up day questions and showed me two of the company’s latest offerings. My ARCH pick for The Quail show was the bike in front of them – the ARCH 1s high-performance Sport Cruiser. The fit and finish of each ARCH motorcycle is carefully tailored to its owner. 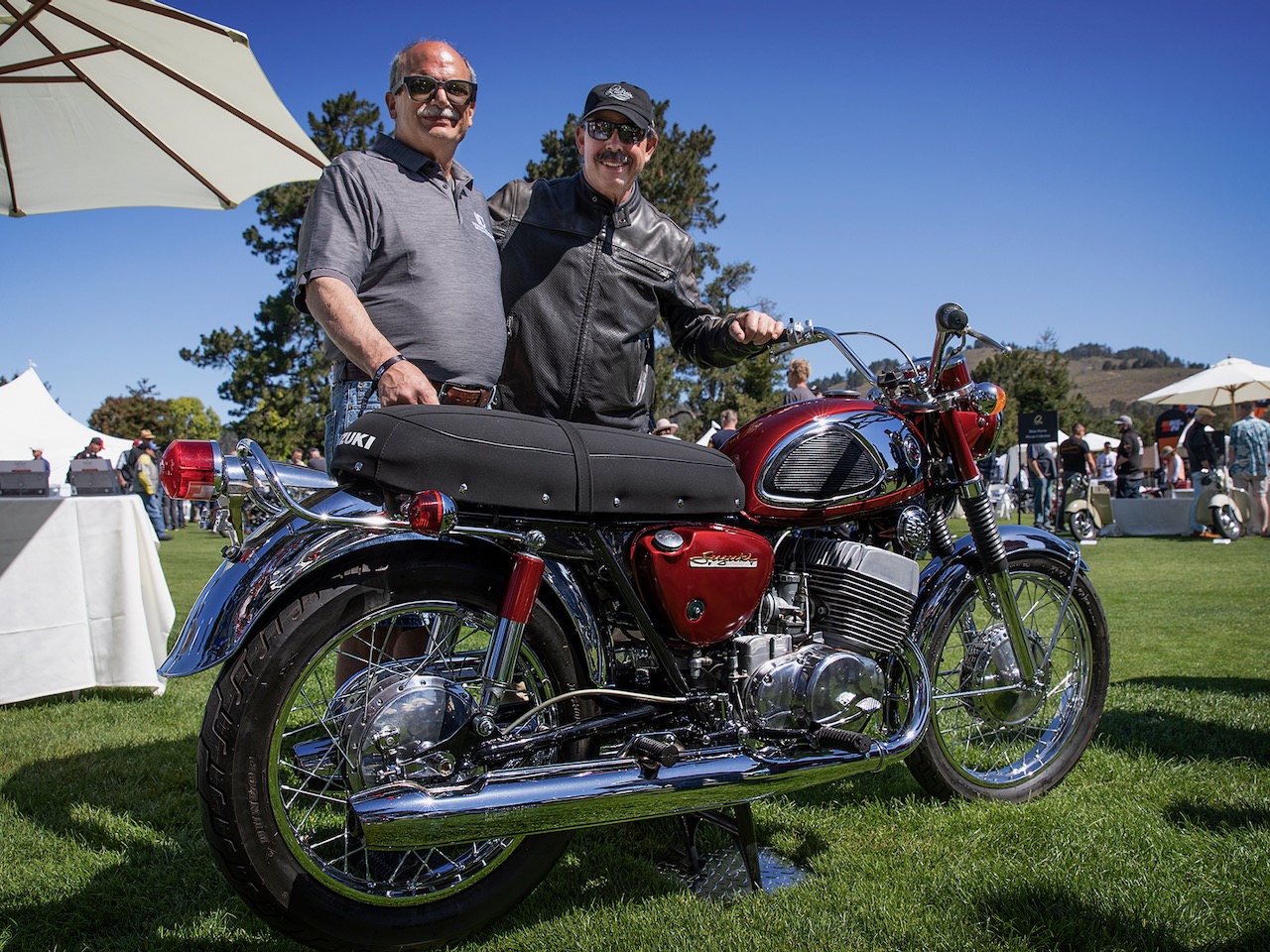 Speaking of partnerships, in the world of motorcycle collecting and show circuit competition it is more often than not, a partnership of a discerning and motivated collector with a master level restoration shop or craftsman. Leather-clad collector Eric Meithke is pictured here with Tony Digati, his – and I’m quoting Eric – “Michelangelo of Motorcycle Restoration.” Before them is just one of their many projects, a spectacular ‘68 Suzuki Cobra 500. It features a duplex cradle frame, has a 492-cc two-stroke twin, does the quarter-mile in 13.2 seconds and has a top speed of 105 miles per hour! 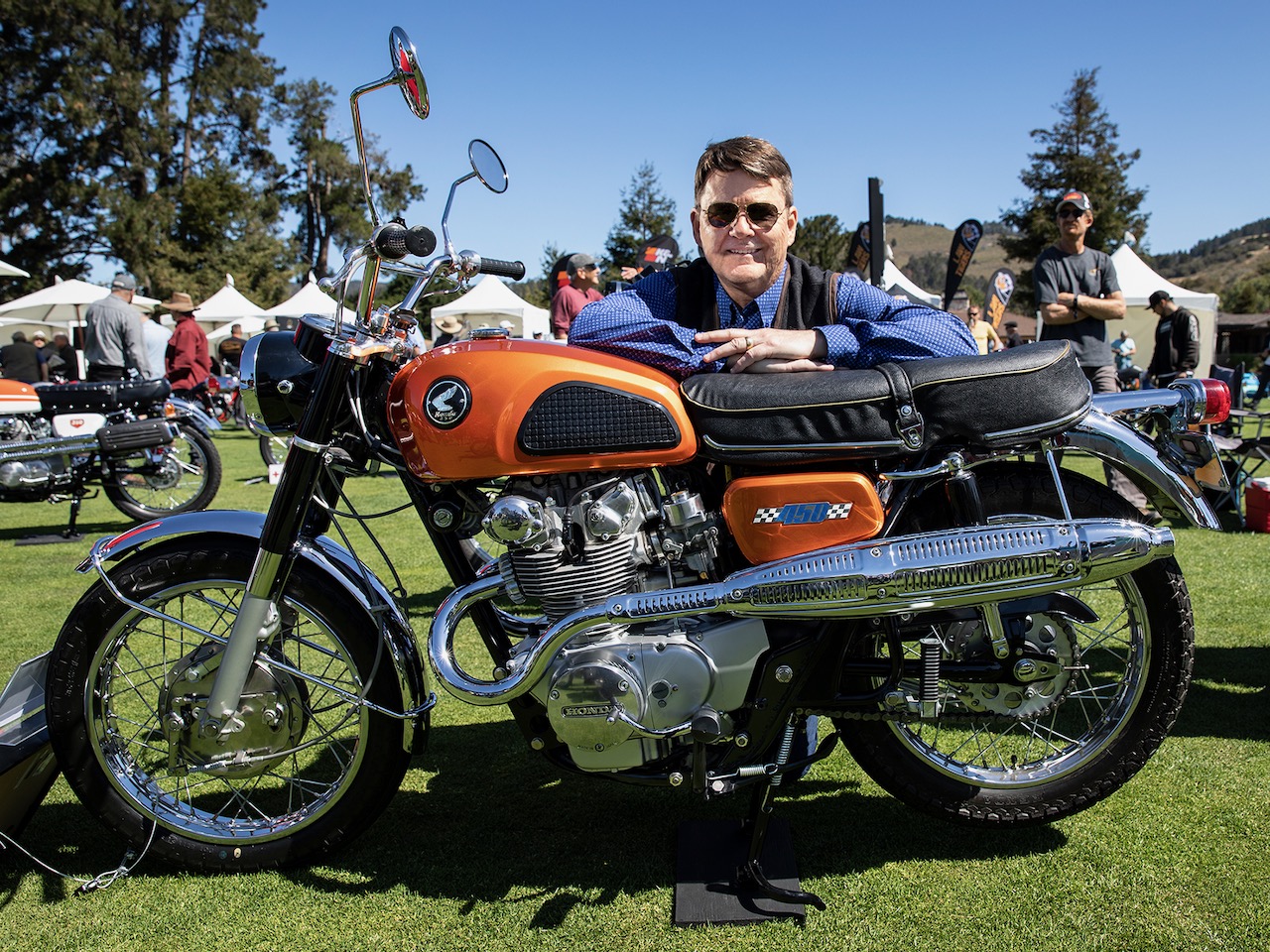 Each time I’ve seen Clay Baker at The Quail Motorsports Gathering he’s brought with him impeccable, show-winning Honda motorcycles – like this very special ‘67 450D Super Sport. There are only 35 known 450 “D” bikes in the 450D registry. This one was made even more rare by the orange paint “D-Kit” conversion. The 53-part kit was a dealer option to help sell off their 4-speed black bombers by converting them to 450 Scramblers with components like a revised gas tank and side covers, braced handlebars, shorter seat, Scrambler exhausts and bright colors. 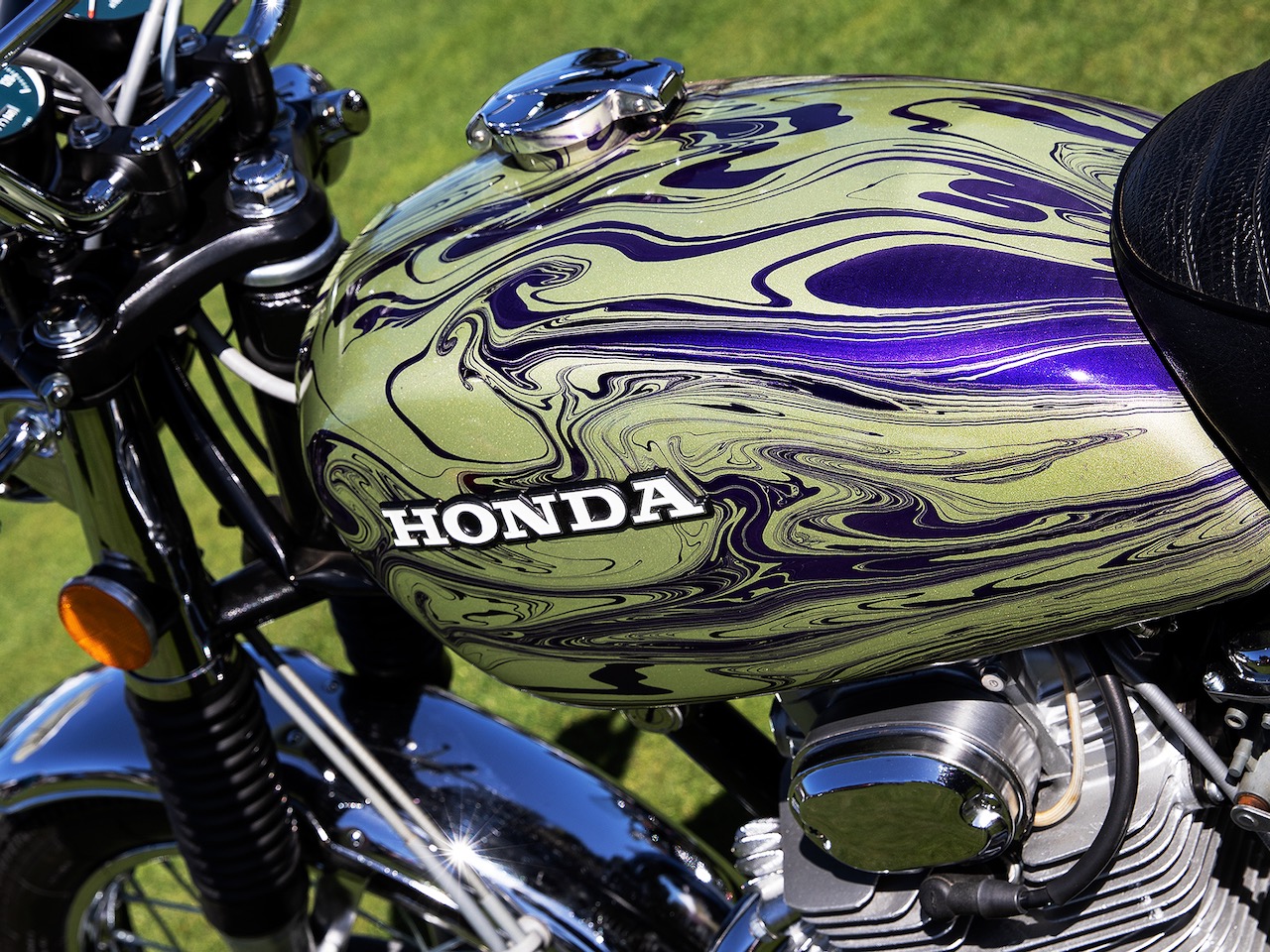 Aesthetics has always played an important role in the marketing and sales of motorcycles. When Honda executives took notice of the bizarre colors and styles of the psychedelic era, they figured they could boost their American and European market sales by offering special paint kits to their dealers. Swirling paint for Honda tanks and side covers were offered as kits under the name Flying Dragon. This close-up of Steve Adler’s pristine ’73 Honda CL350 K5 Flying Dragon shows the gold and purple color scheme, one of three different combos available. 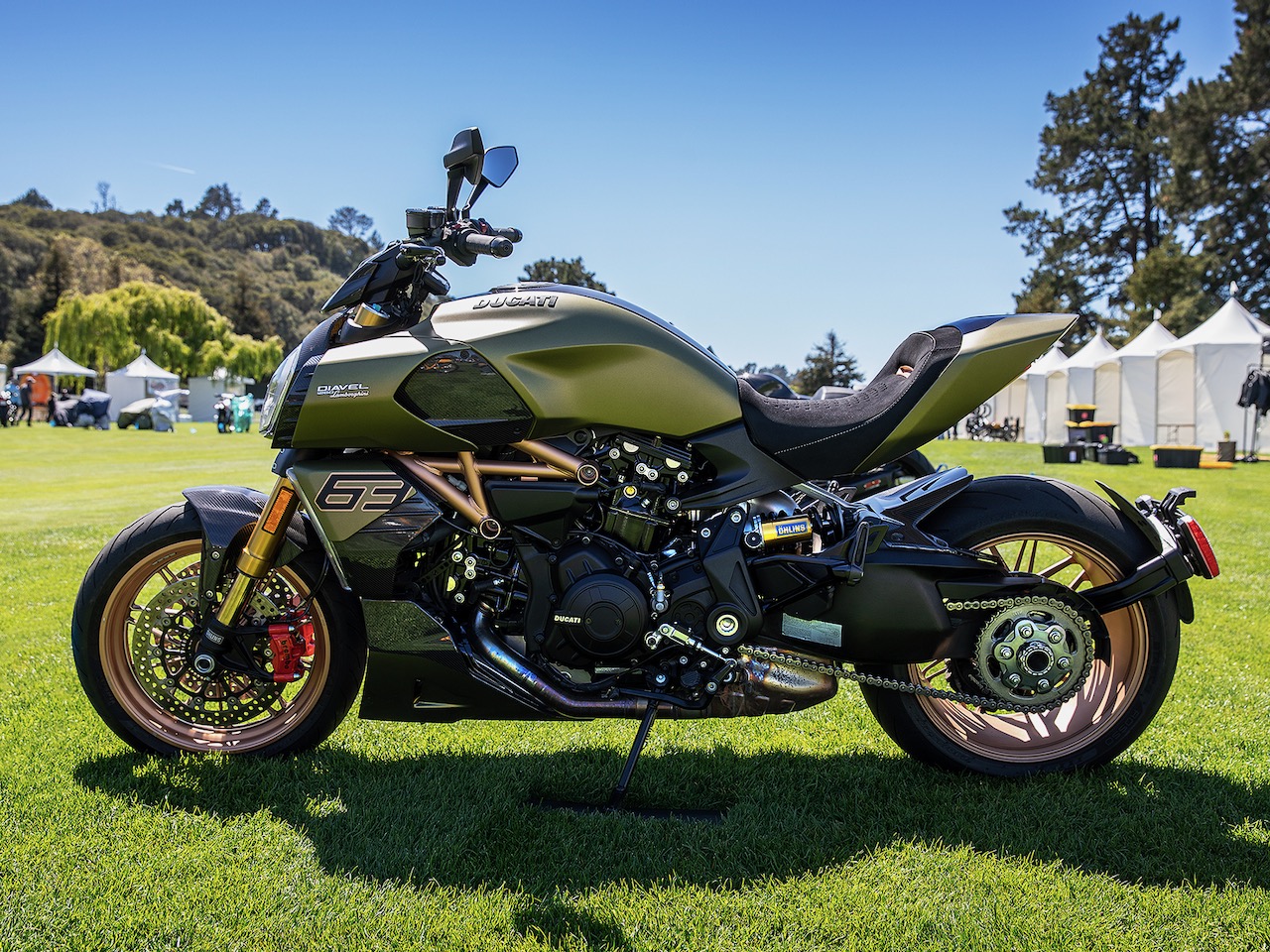 There’s always a point when I’m covering motorsports shows that I either want to jump in or on the machine I’m photographing to see what she can do. That was my first inclination when I spotted this limited-edition Diavel 1260 Lamborghini Ducati. One of only 630 units produced in 2021, this Diavel represents a fusion of Italian design and performance excellence. It’s chiseled, fighter jet lines are inspired by the Lamborghini Sian FKP 37. The Diavel’s thoroughbred sports engine produces 157 horsepower and 95 pound-feet of torque. It has a dry weight of 485 pounds and a 2021 price tag of $31,995. 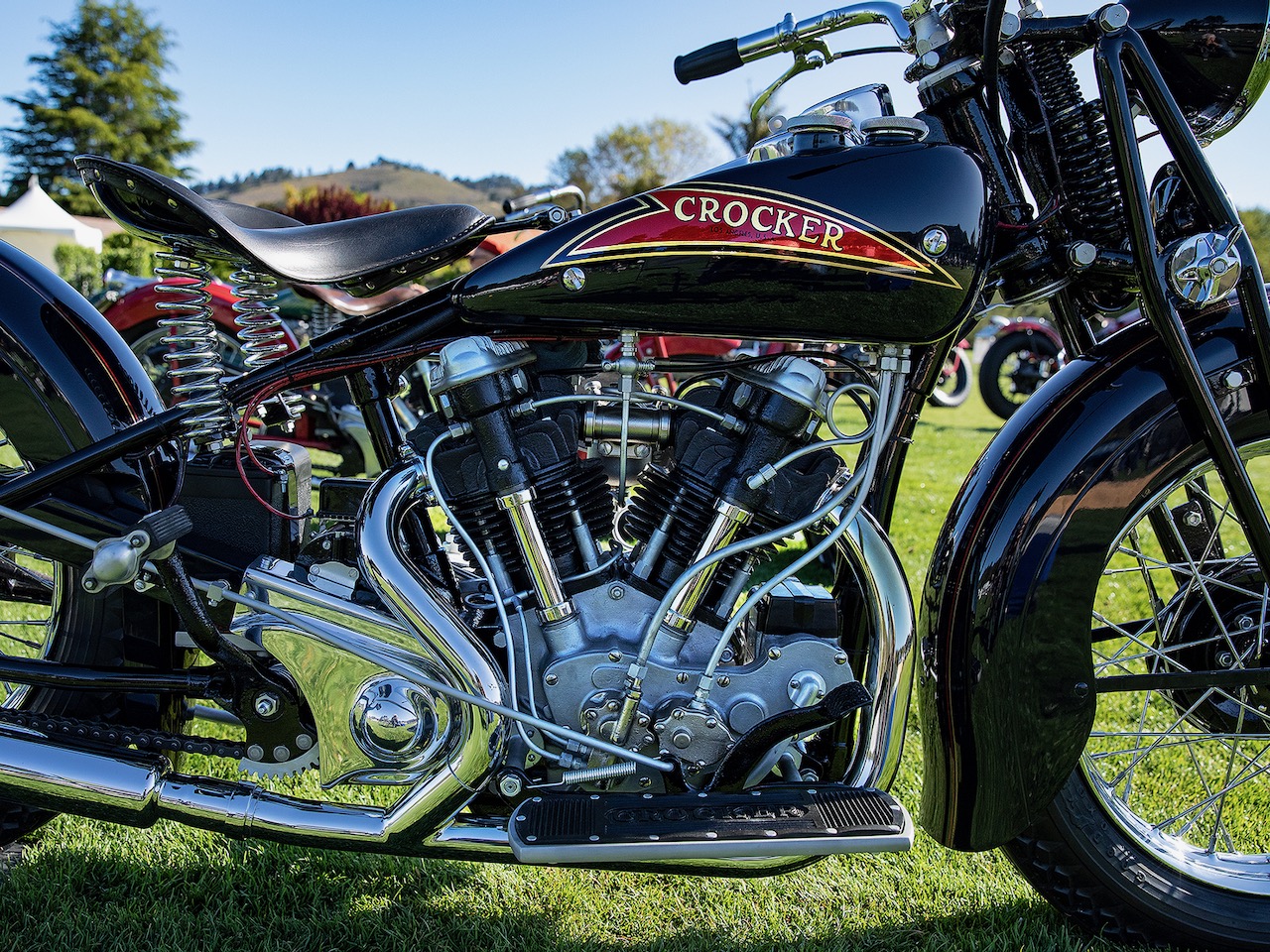 Crocker Motorcycles were manufactured in Los Angeles from 1936 through 1942, at which point the plant was reconfigured to support the war effort and motorcycle production ceased. During that short period of time less than 100 Crockers were produced. Back in those days a Crocker had a top speed of 140+ mph. This rare ‘39 “Small Tank” Crocker is from Mike Madden’s collection. Its 61 cubic inch motor produced about 50% more horsepower than the Harleys and Indians of the era. In fact, they were faster than almost every production automobile on the road in the 1930s! 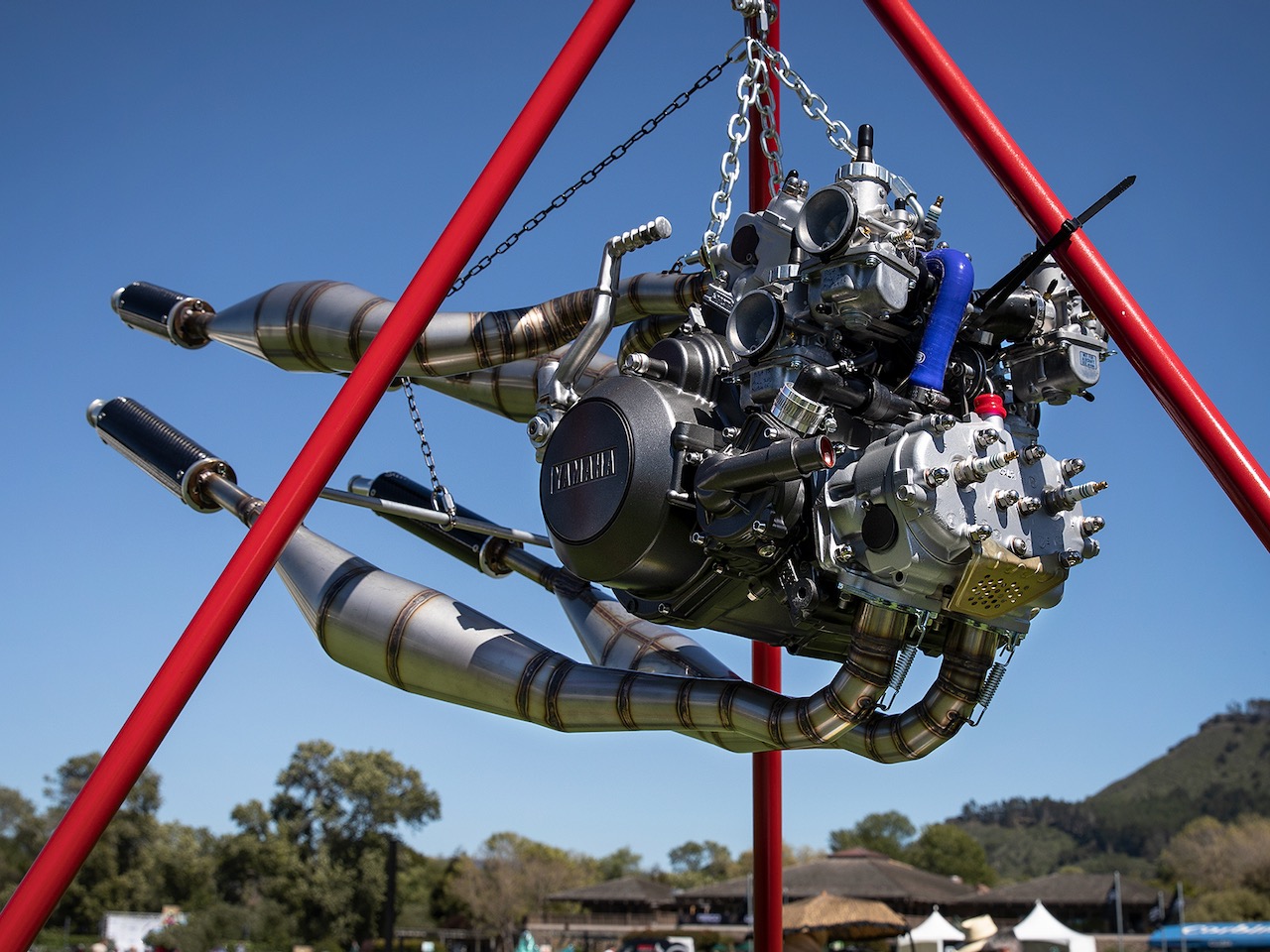 This is one of the reasons I love hanging out with car and motorcycle enthusiasts: they are passionate about their vehicles, they are skilled, and they are often lovers of art. When Ron Wilcox replaced the ‘85 Yamaha RZV500R engine in his project bike he didn’t just hide it away in a dark storage area, he built a sturdy tripod for it so it could be displayed in all its “Heart of the Beast” artistic glory. Thanks for hefting this art to The Quail, Ron! 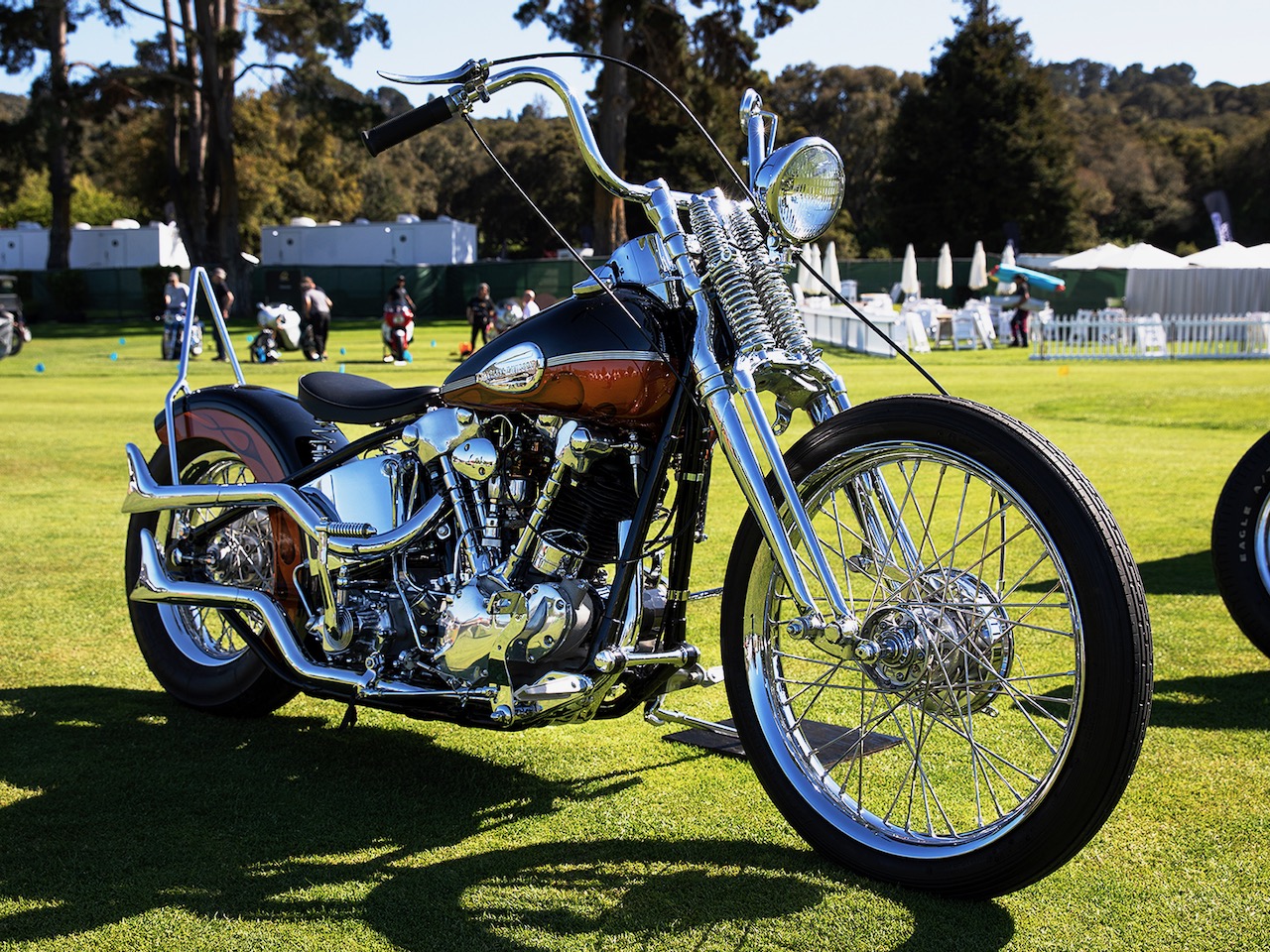 It pleases me to no end that there is still a Chopper class at The Quail Motorcycle Gathering. I’m from the Easy Rider era and most bikes I saw on the streets and highways back then were home-garage-fabricated Harley Bobbers and Choppers. If there was one bike on the field at The Quail that could transport me back to the Harley Heydays it would be Big Danny Marquis’ drop-dead gorgeous ’37 Harley-Davidson Knucklehead. Every inch of this bike is perfection. 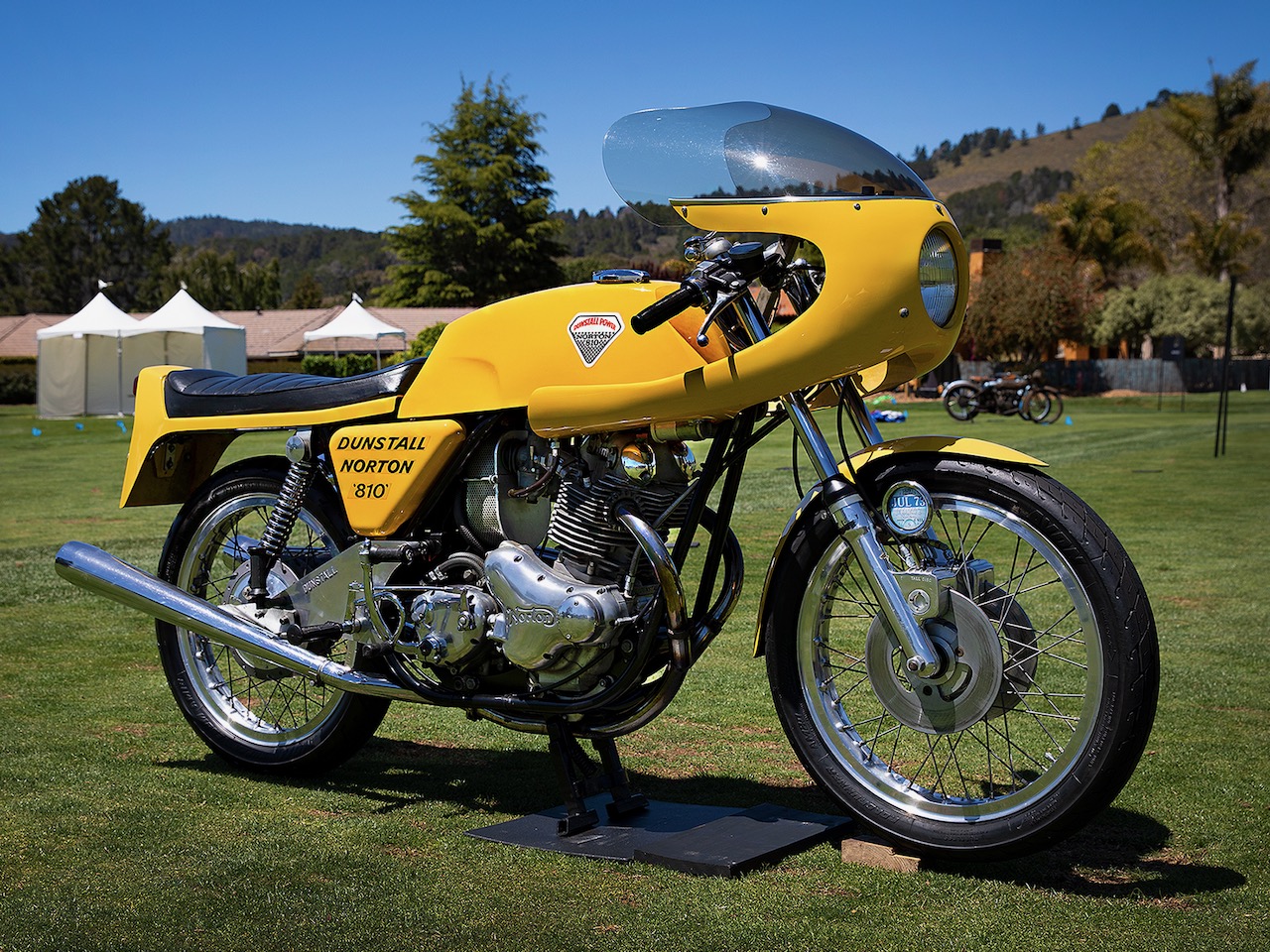 That it took 1st Place in the British Bike class is really no surprise, because Phil Lane’s ‘72 Dunstall Norton 810 MK 2 is an icon. In 1972 it was hailed as the fastest standard motorcycle ever produced and that’s the year Phil bought this bike. Dunstall Nortons were designed and built by Paul Dunstall, a specialist tuner with a knack for building fast, race-winning motorcycles. Dunstall also built BSAs and Triumphs, and would later move on to Japanese marques before leaving the motorcycle world for a career in property development. 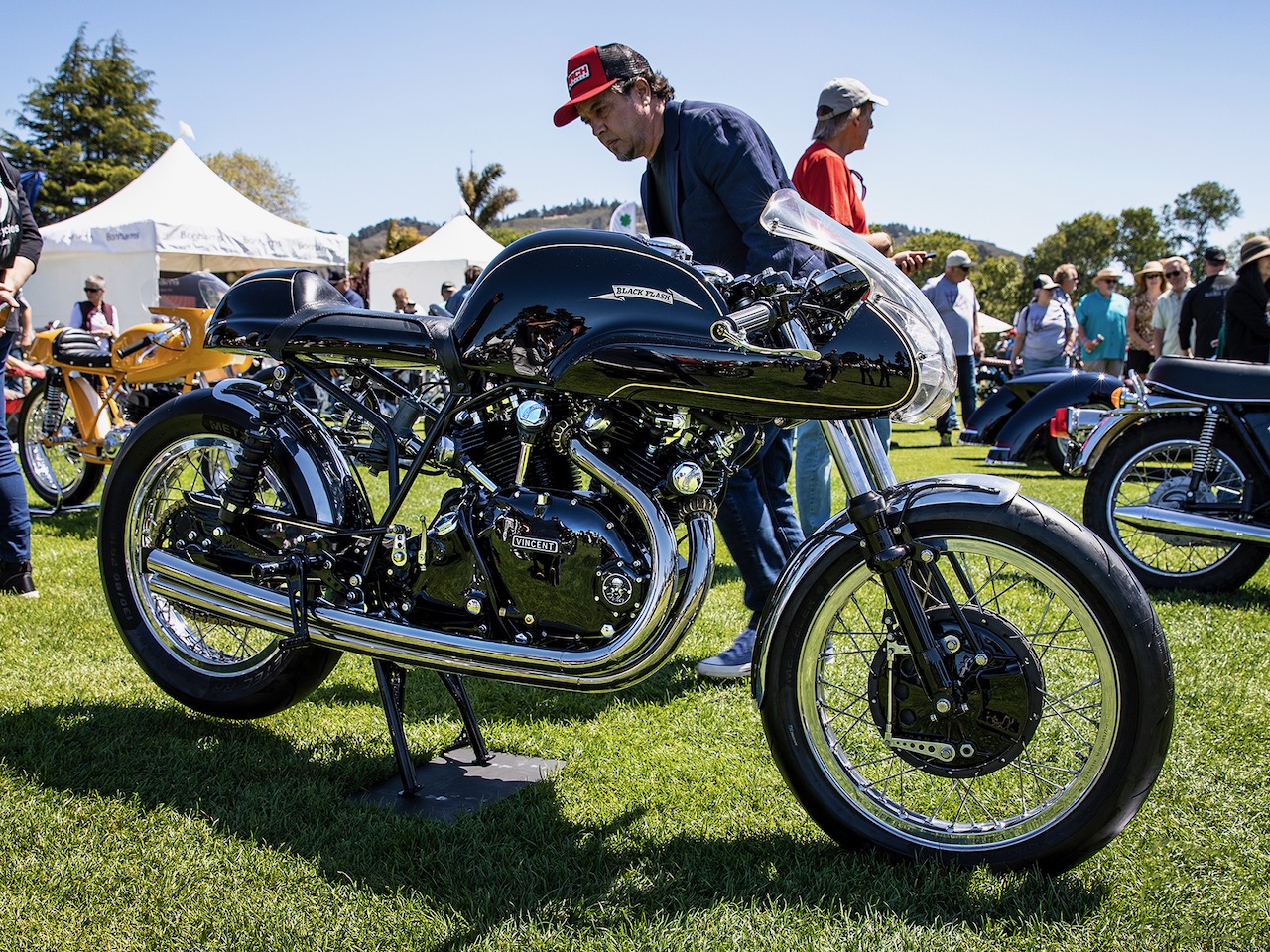 Gard Hollinger of ARCH Motorcycles checks out some of the tantalizing detail in Brian Fuller’s ‘51 Fuller-Vincent Black Flash. This bike received the Art Center Award at The Quail in the Custom class. As some of you know, Brian Fuller has been appearing on television for years now on car shows where his assured demeanor matches his skills in automobile and motorcycle building and fabrication. He currently appears on MotorTrend TV’s show Car Fix with co-host Jeremy Bumpas. To see more of Brian’s fabrication magic, visit his website at https://fullermoto.com/ 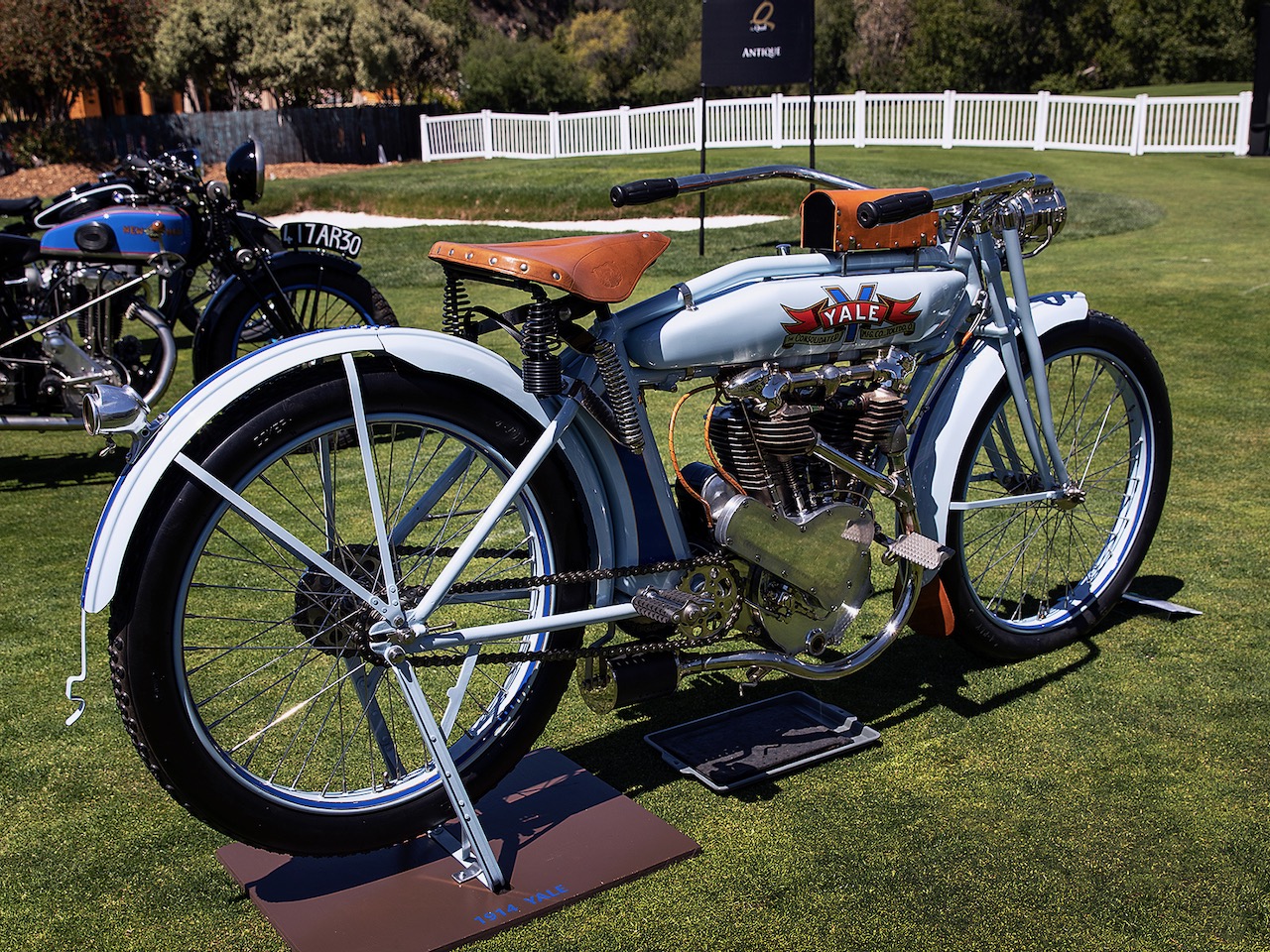 Allan Christie’s sublime ‘14 Yale 37 took 1st Place in the Antique class at the 12TH ANNUAL QUAIL MOTORCYCLE GATHERING. This award was presented by Bonhams. Yale motorcycles were manufactured by the Consolidated Manufacturing Company of Toledo, OH. They had acquired the rights to the California motorcycle which was the first internal combustion vehicle to cross the American continent in 1903. The Yale 37 sported a V2, four-stroke 1000-cc motor capable of propelling this Sport bike to a top speed of 71.5 mph. 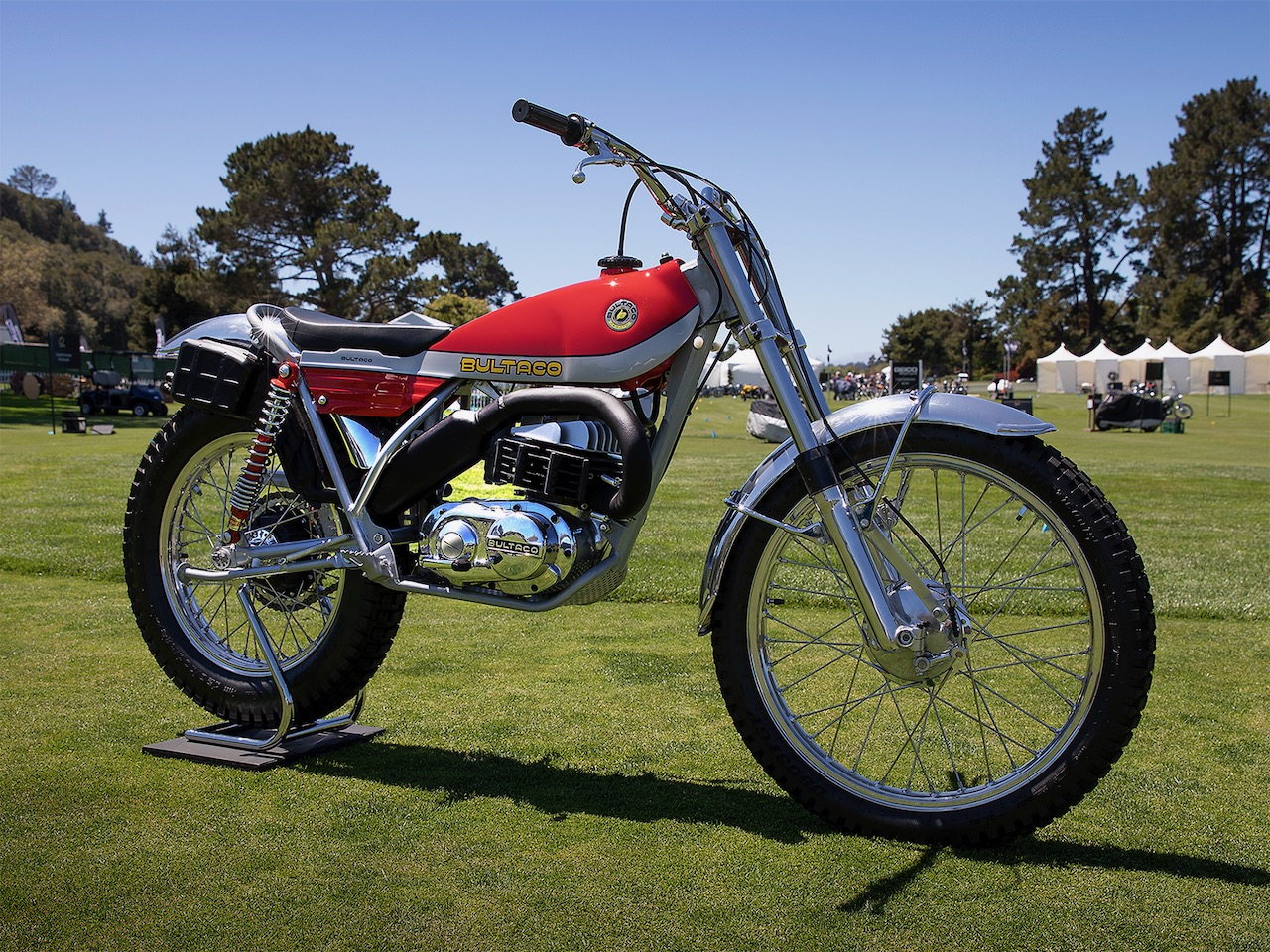 I wanted to end my coverage of the 12TH ANNUAL QUAIL MOTORCYCLE GATHERING where it all began – with this simple image of this simply wonderful Bultaco that was the first photo I took on the set-up day. The crowds and celebrities had yet to arrive and the show field was almost bare, but most certainly beckoning. There was nobody polishing or prepping this bike, nobody guarding it. It was all I would have needed to make an escape – from the daily routines and our complicated world. It’s estimated that there are over 200 million motorcycles, mopeds and scooters on our planet right now. Perhaps I’m not the only one looking to escape!

For more information about The Quail Motorcycle Gathering and other Peninsula Signature Events, please visit https://www.peninsula.com/en/signature-events/events/motorcycle