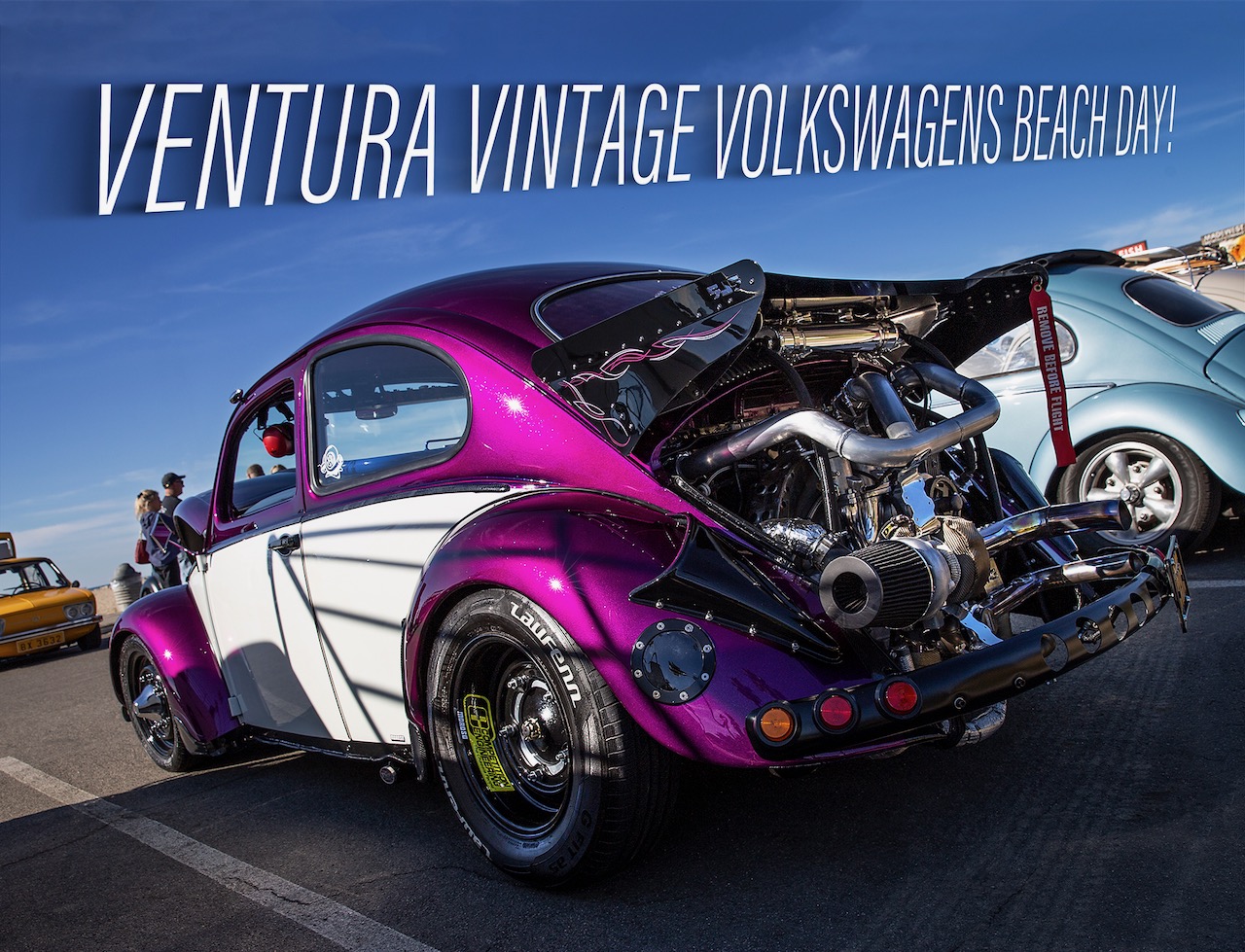 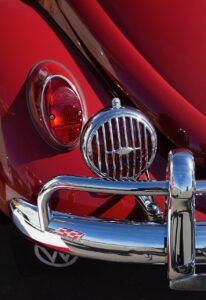 Its mission is clear and simple: Create VW Fun! Ventura Vintage Volkswagens (VVV) is a charter club of the Vintage Volkswagen Club of America. They meet wherever and whenever they can to not only show off the diverse collection of unique VWs in the member ranks, but to also go camping, help each other with their VW projects, throw a barbecue, attend a parade and, of course, go cruising in their VW BEETLES, BUSSES, VARIANTS & THINGS.

It was by sheer luck that I clicked on an email from Malibu car guy “Fireball Tim” and learned from his blog – http://fireballtim.com/ – that there would be a gathering of cool VWs at the Ventura Pier on February 26th. The meet-up was not heavily promoted as it was not billed as an official “Car Show” – ostensibly to avoid the sometimes laborious and often costly logistics, permitting and insurance requirements.

(Remember VVV just wants to Create VW Fun.) So I noted the date and on the 26th headed down from Solvang to the parking lots by the pier in Ventura, CA where the event took place. It was a clear, crisp morning offering a panoramic view of the Pacific Ocean and Channel Islands from the soft sand and bike lanes at Ventura City Beach. The two parking lots beyond the parking kiosk were filling up quickly with participant VWs as I parked near the exit, grabbed my camera and went looking for the promised VW fun. I found plenty of it! 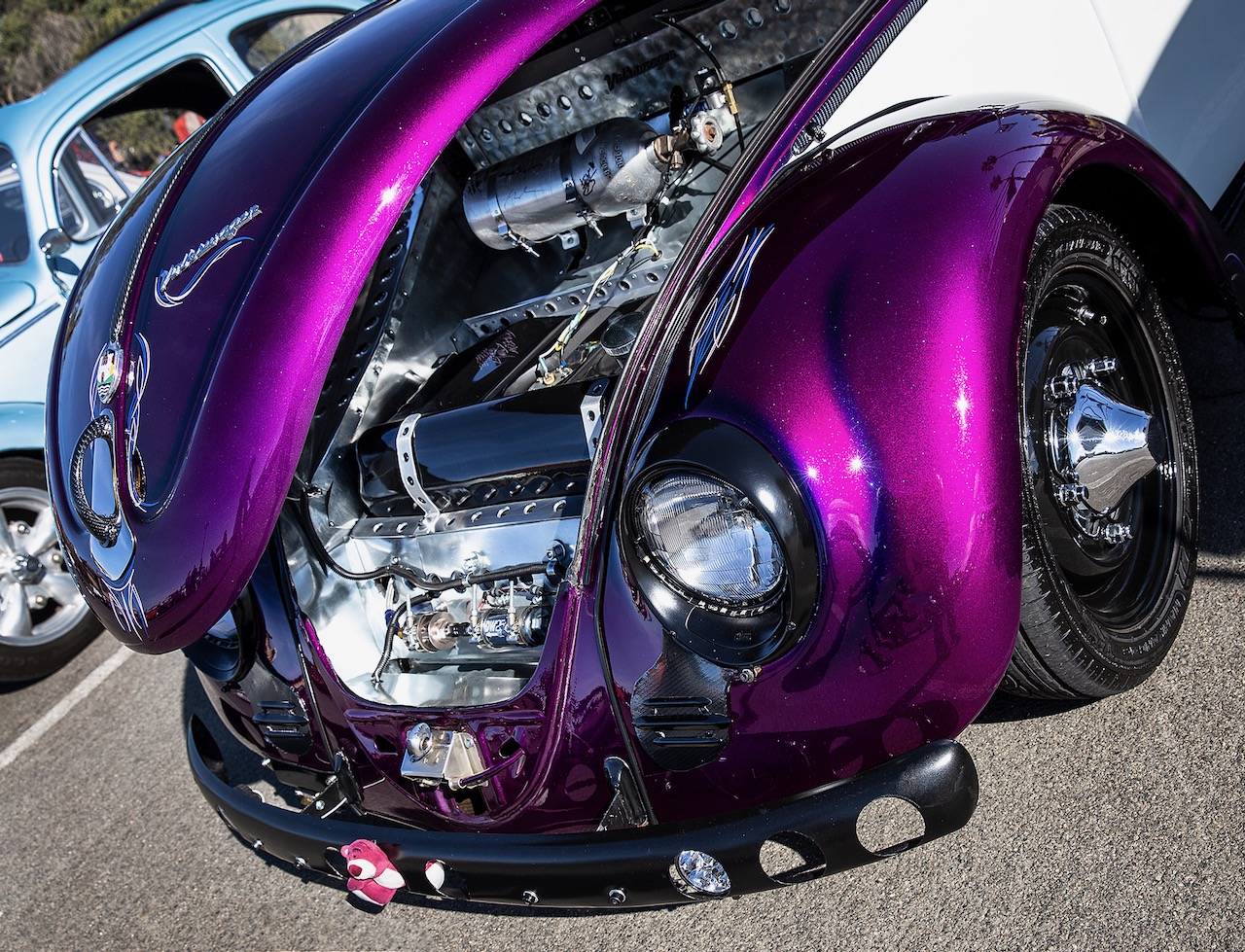 You can see from our lead report photo and now this under-the-trunk shot that there are no picnic baskets in Chris Escobar’s nice ‘n nasty ’65 VW Beetle. What you will find in this ready-to-race Bionic Bug is a fuel-injected, 2,180-cc motor fitted with a Garrett “Quick-Boost” turbocharger that delivers 350 horsepower to the rear wheels. Keeping the 2,100-pound Bug behaved on the road and on the track are custom front and rear suspension components from Sway-A-Way. 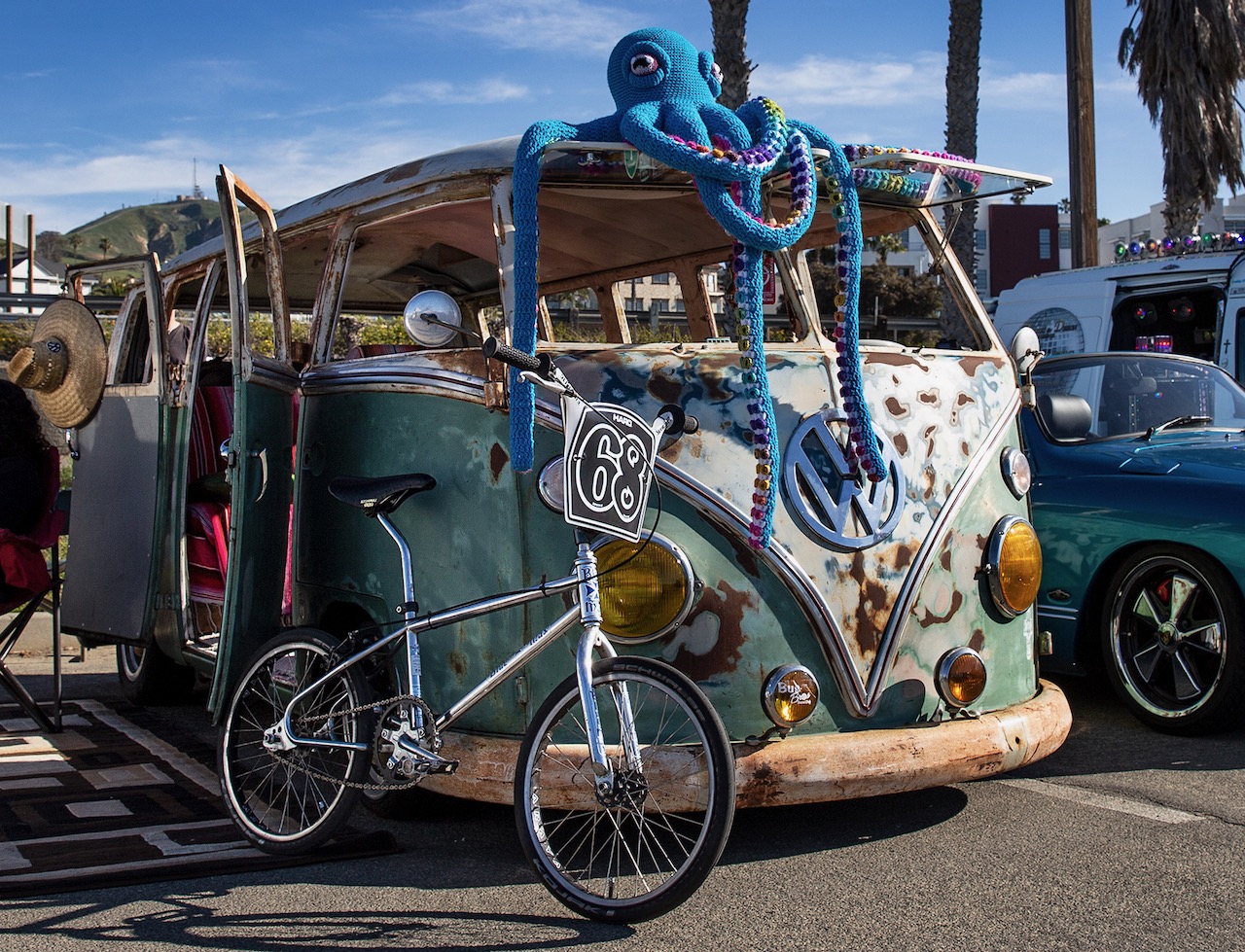 Variety is the ‘Spice of Life’ and one of the factors that makes Car Guy gatherings like the VVV Beach Day tons of fun. I mean seriously, how often are you going to encounter an 11-Window, Type 2, heavily patinated Split-Window VW bus in the clutches of a giant blue octopus? 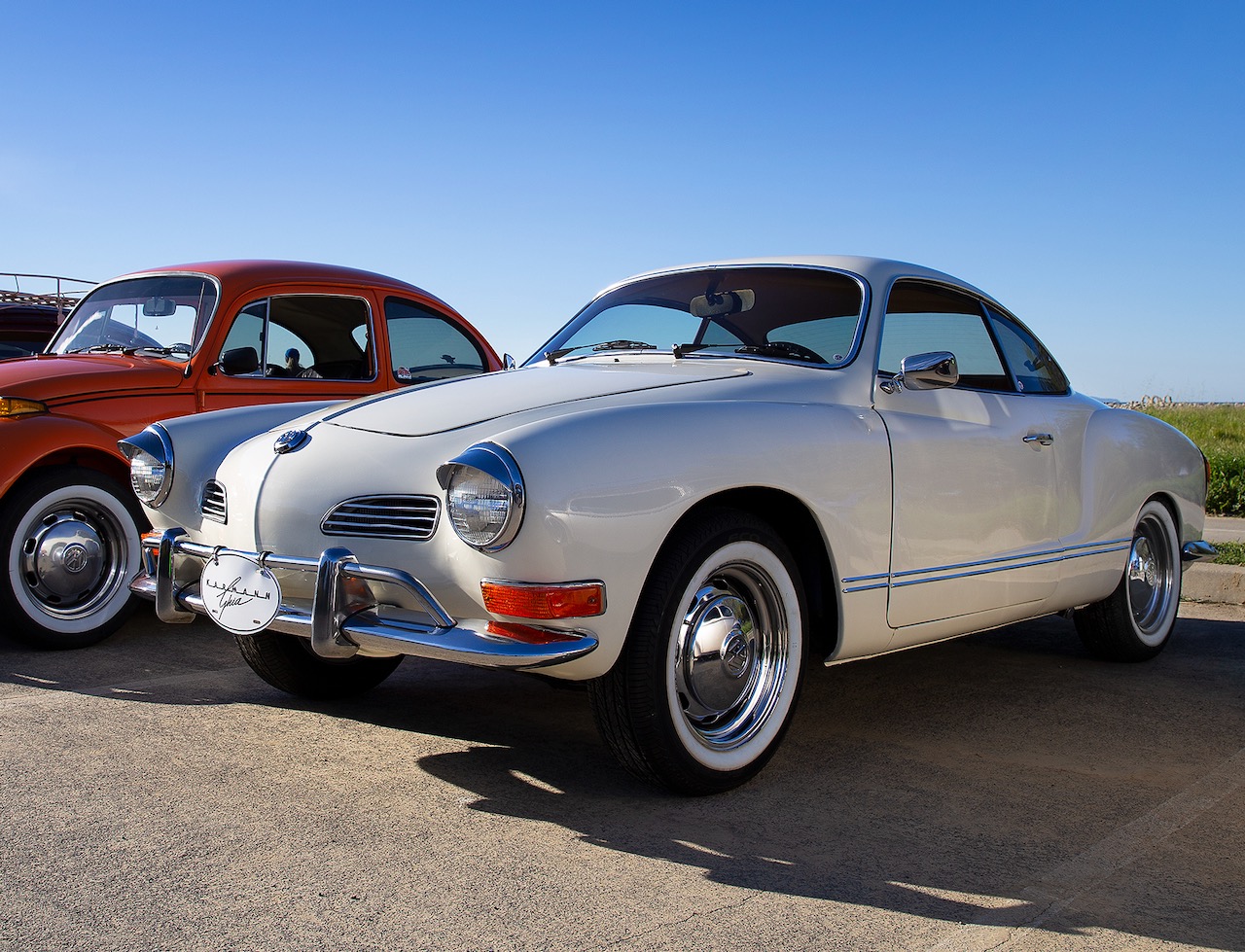 A Family Affair: Many of the vehicles at VW BEETLES, BUSSES, VARIANTS & THINGS were examples of the love and enthusiasm for the brand shared by multiple generations of one family. When Christopher Ramos was growing up, he watched his airplane mechanic Dad Joel build seven show-winning Karmann Ghias. So it wasn’t a surprise when Joel gifted not only this ’70 Ghia to Chris, but also the bright orange Beetle parked next to it. Both of these lovingly-restored by Joel VWs are finished in PPG “Jet-Glow” airplane paint. The Ghia’s interior is finished in supple tan Porsche leather. 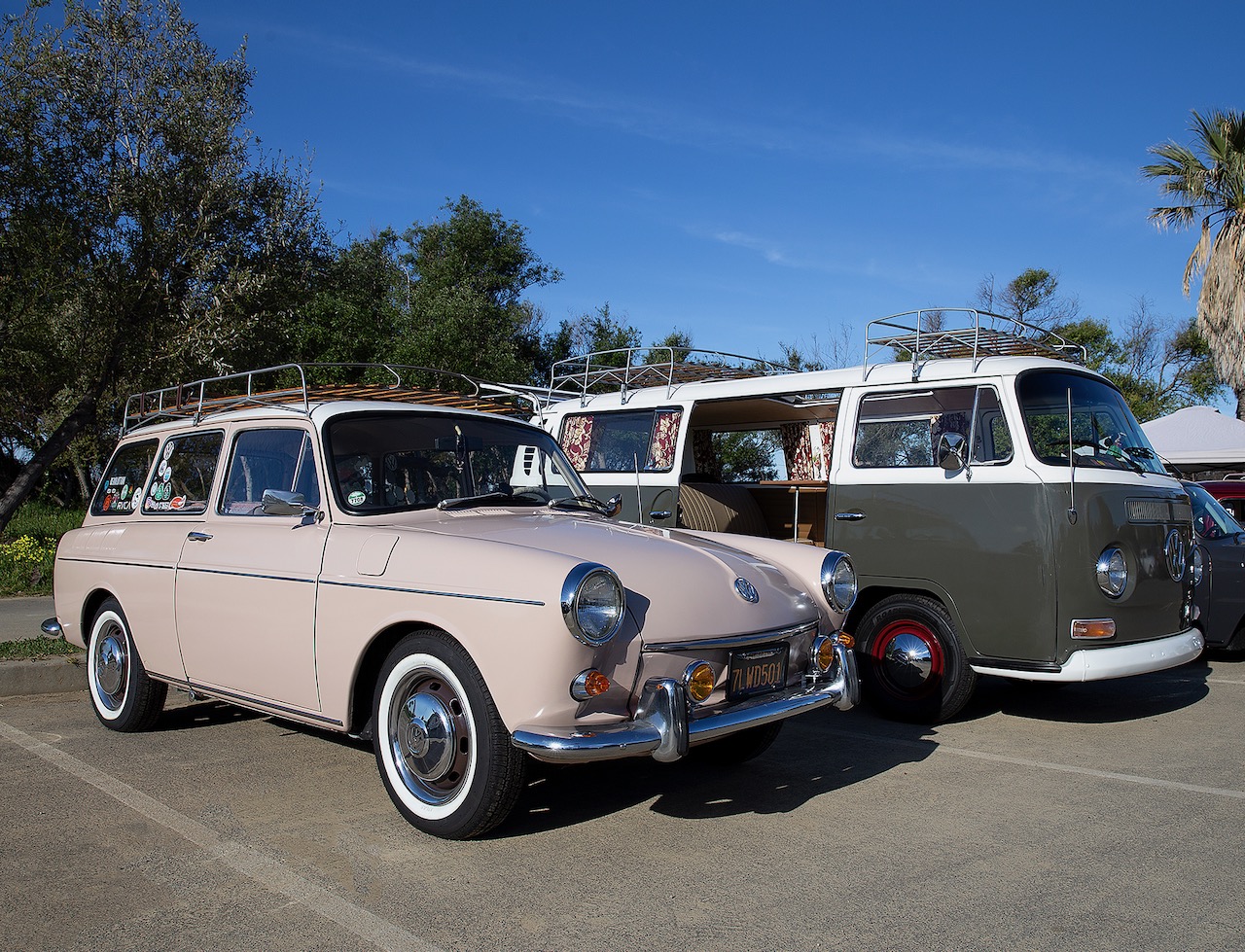 His & Hers: “She” is the proud owner of this blush-tone, Type 3 Slant-Nose VW Squareback. Known in some circles as a Variant it is to many the perfect little “Surfwagon” – with its fold-down rear seat creating a convenient nap or short-board stow area. “He” loves his wife and his two-tone Type 2 Microbus. Depending on body type, VW buses have been known as Transporters, Kombis or Microbusses, or, informally, as The Bus in the US, The Camper in the UK – and more deliciously as a Po de Forma (Loaf of Bread) in Portugal! 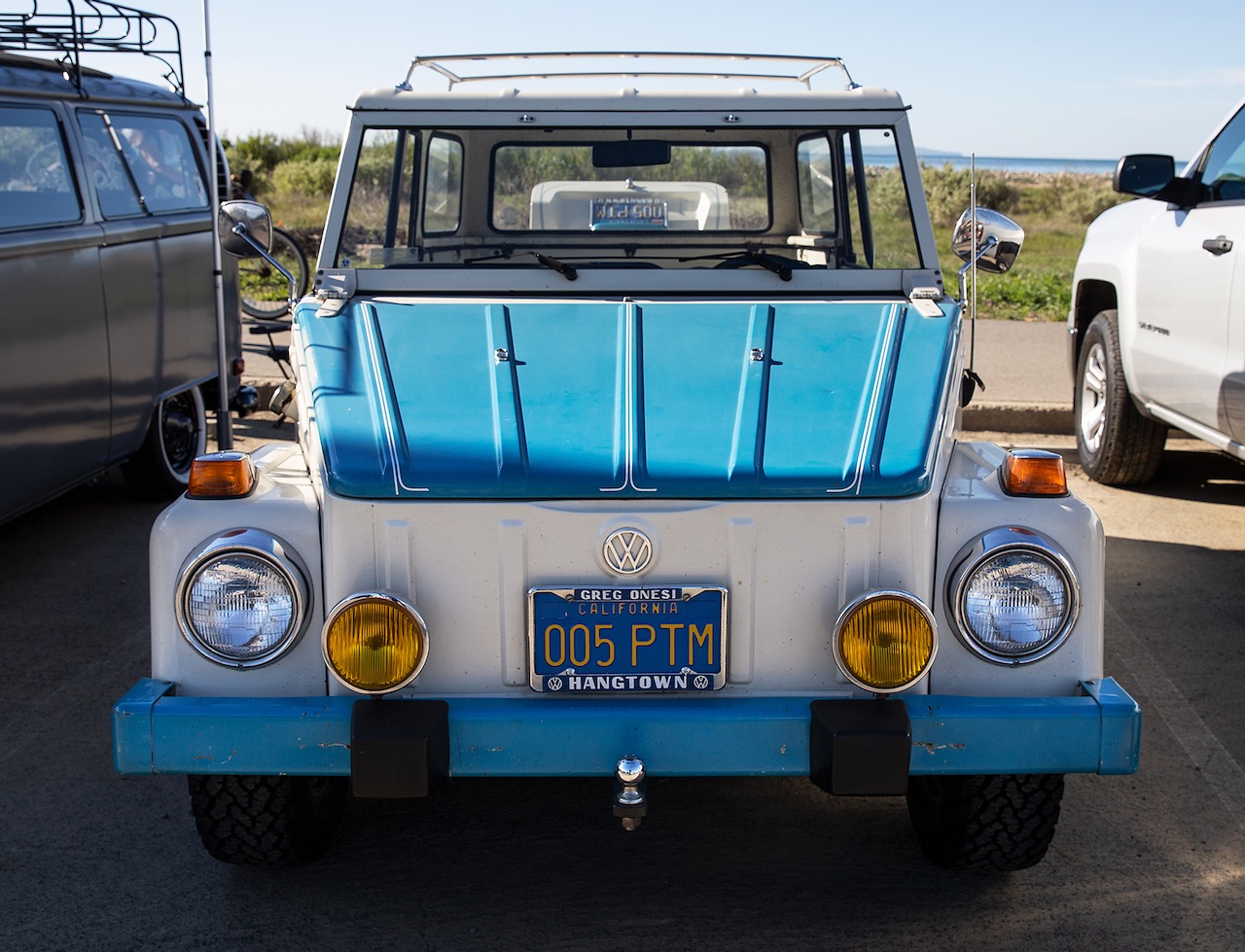 Some Things are better than others. Frank Walling’s all-original “Acapulco Thing” is an example of this rather rare, Type 181 limited edition. Approximately 400 “Resort Cruisers” were assembled in Puebla, Mexico in 1974 and delivered to two legendary Acapulco resorts to shuttle their jet-setting clientele from the airport to these oceanfront get-aways. They would typically have been outfitted with striped blue and white surrey tops. The original Type 181 was developed to provide NATO members with a light-duty patrol vehicle. 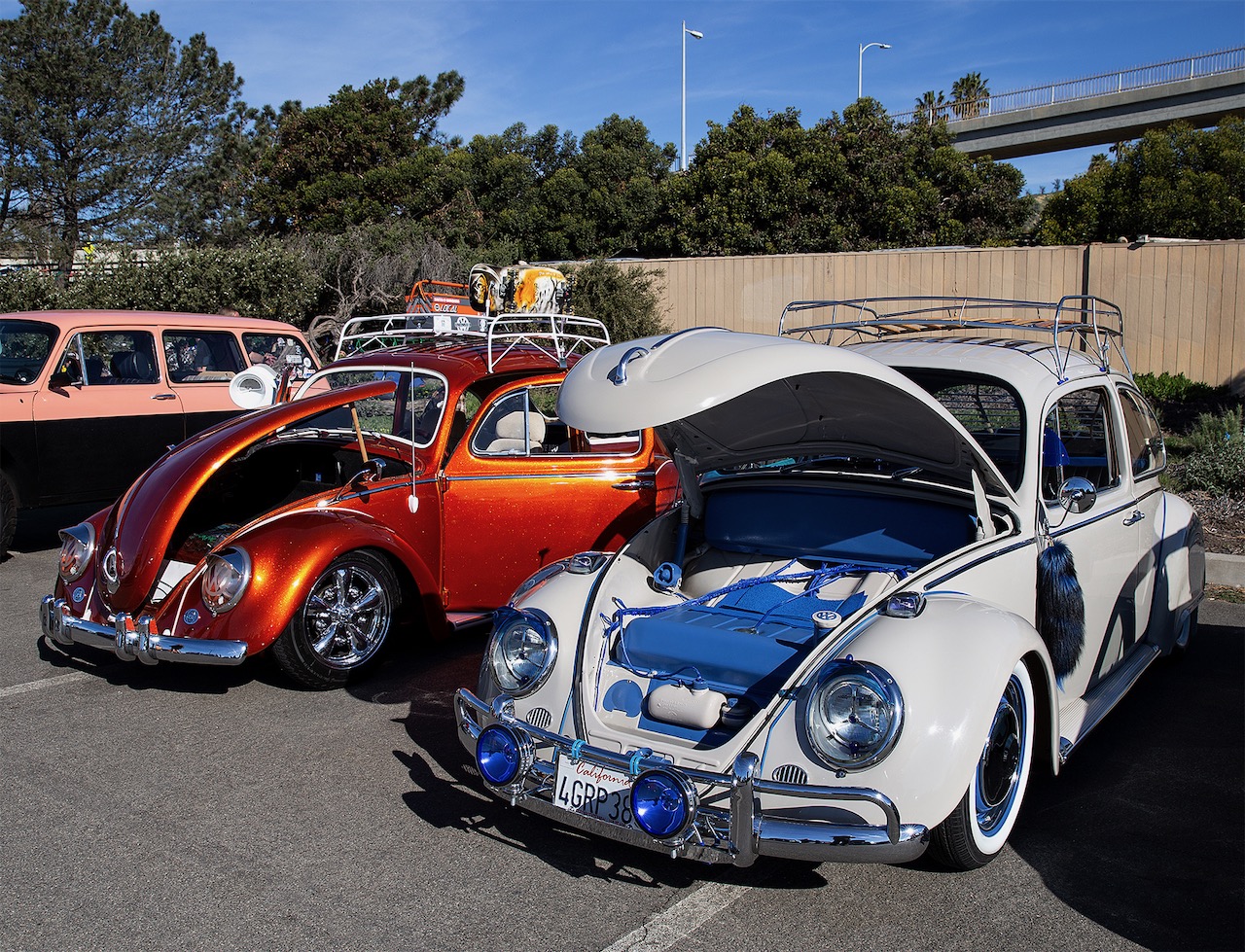 The Wolfsburgs Finest VW Car Club not only brought us our featured car for this report, but also these custom Beetles. On the left is Tim Beatty’s eye-poppin’ ’63 Bug. Finished in Tangerine Orange Flake, it sits low on a hydraulic “Juiced” suspension and rolls on chrome EMPI 5-Spoke wheels. On the right is Javier Simental’s skirted ’66 that gets its low stance thanks to 2″ dropped spindles. This Low-Rider is finished in a soft sand paint with clever and tasty blue accents – including a blue striped Racoon tail! 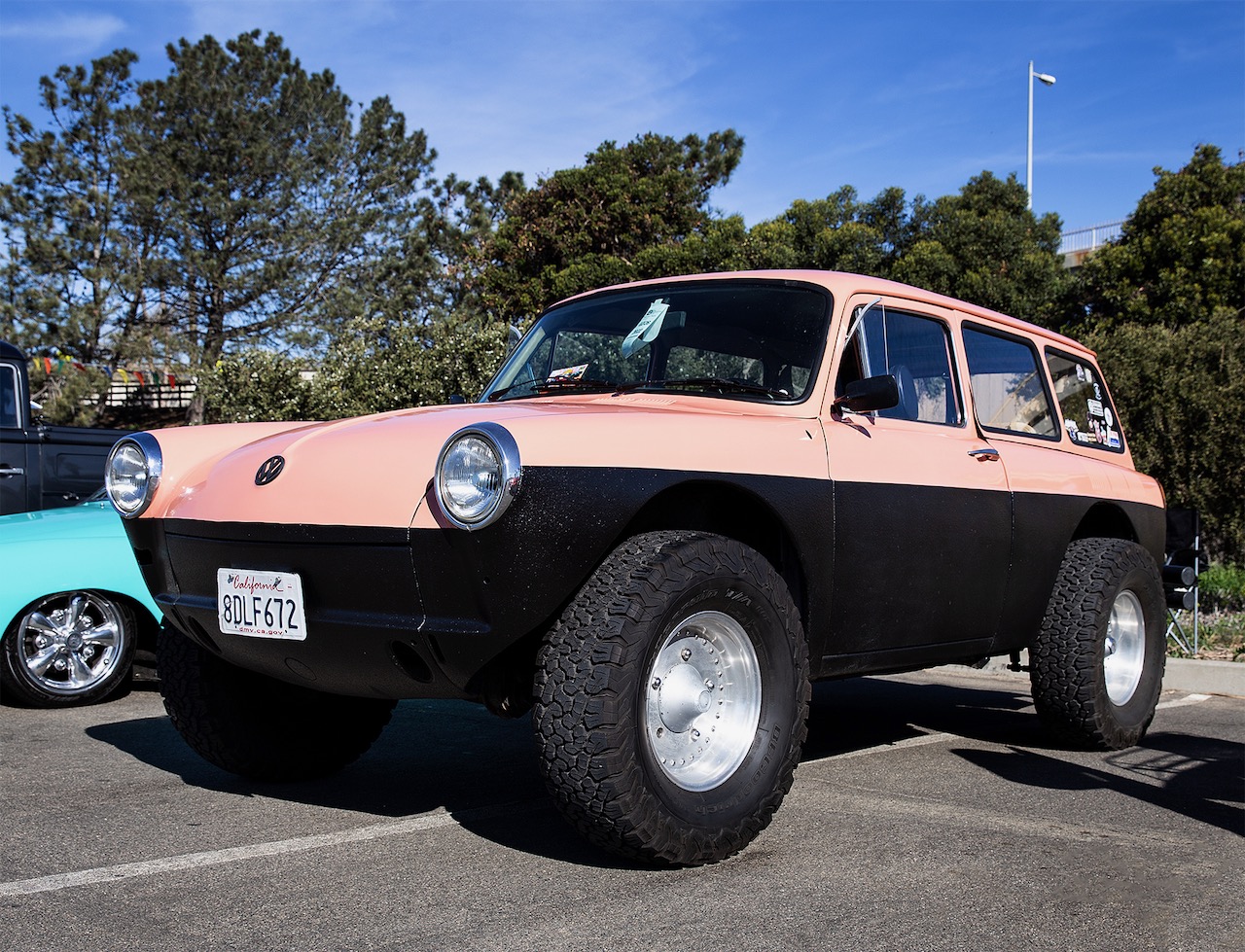 While you’ll no doubt find most classic VWs heading to highways, beaches, markets, campgrounds and car shows, there are a handful that head off-road to the torturous terrain of the Mexican desert. While the top section of this Type 3 slant-nose Squareback looks like a tame grocery-getter, the modified bottom section is signaling, “I’m ready for some high-riding Baja fun!” Might want to add some Baja bumpers before heading out… 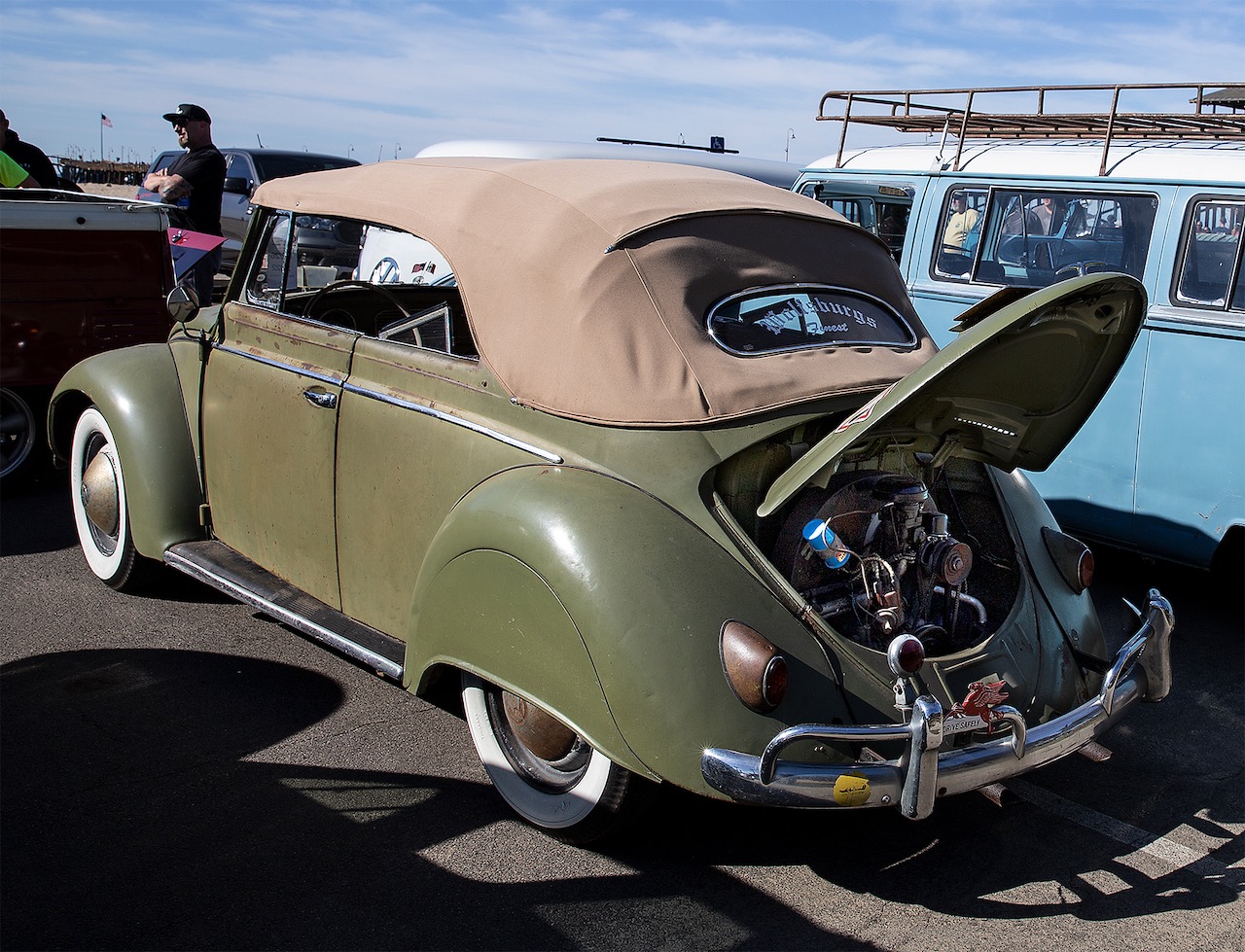 In 1968 American soul singer Jerry Butler released his hit song Only The Strong Survive. Eleven years earlier, in 1957, VW was 19 years into its production cycle of the Type 1 Beetle. Fast-forward to 2022 and the sand-kissed parking lots at the Ventura Pier where I discovered Chemo Ordaz’s still strong and still sexy ’57 Beetle Cabriolet. Its 1,100-cc H4 motor produces a whopping 36 horsepower, enough oomph to propel Chemo and his family to fun destinations in Ventura County. The Foxcraft metal skirts are original to this Almond Green survivor. 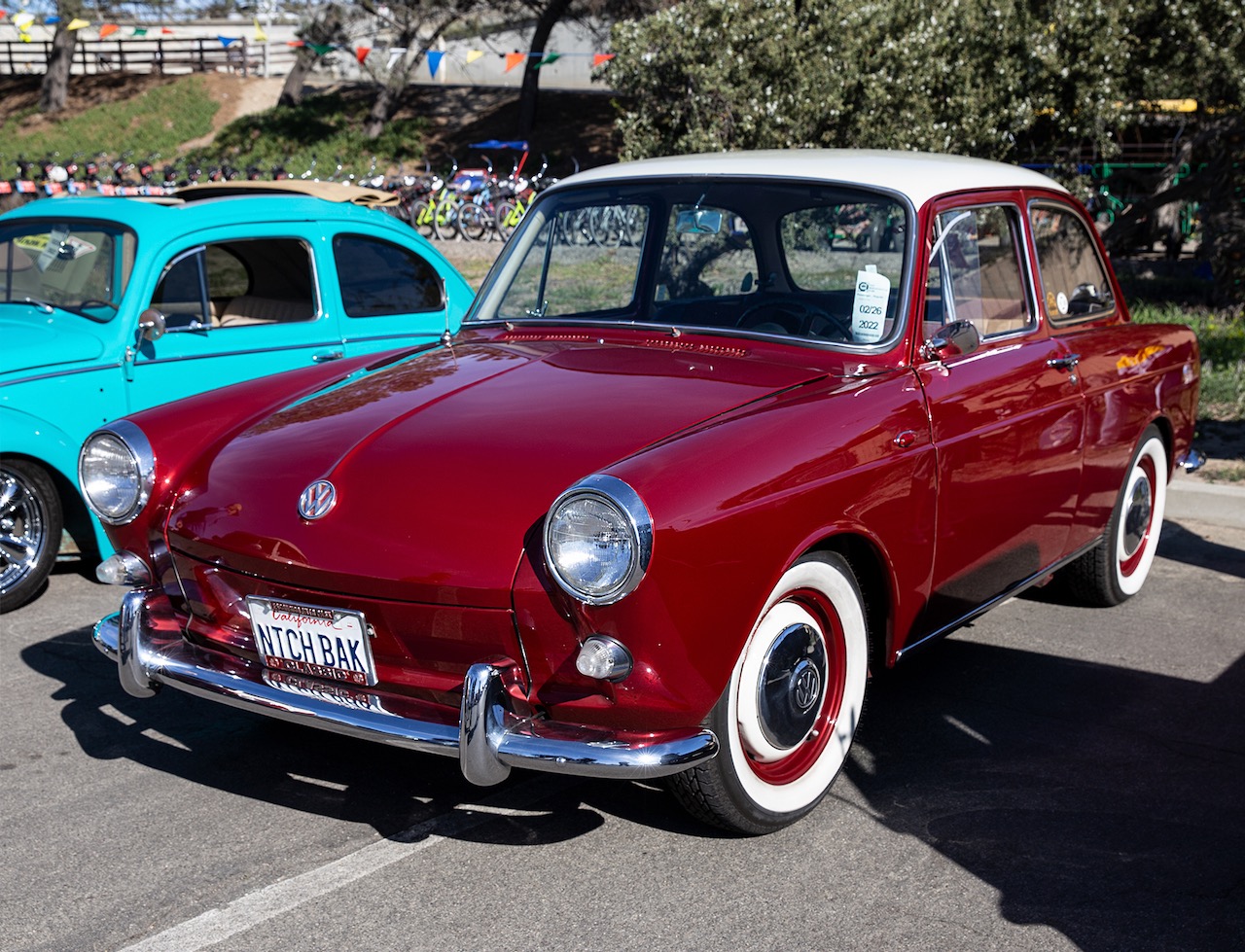 VW’s Type 3 was introduced in 1961 at the Frankfort Motor Show. One of the improvements made over the Type 1 Beetle was a front suspension that now incorporated transverse round torsion bars, as opposed to the Type 1’s torsion leaves. The Type 3 was available in three styles – the Squareback, the Fastback, and as shown in this wonderful example on display at VW BEETLES, BUSSES, VARIANTS & THINGS, the very proper 2-door Notchback. 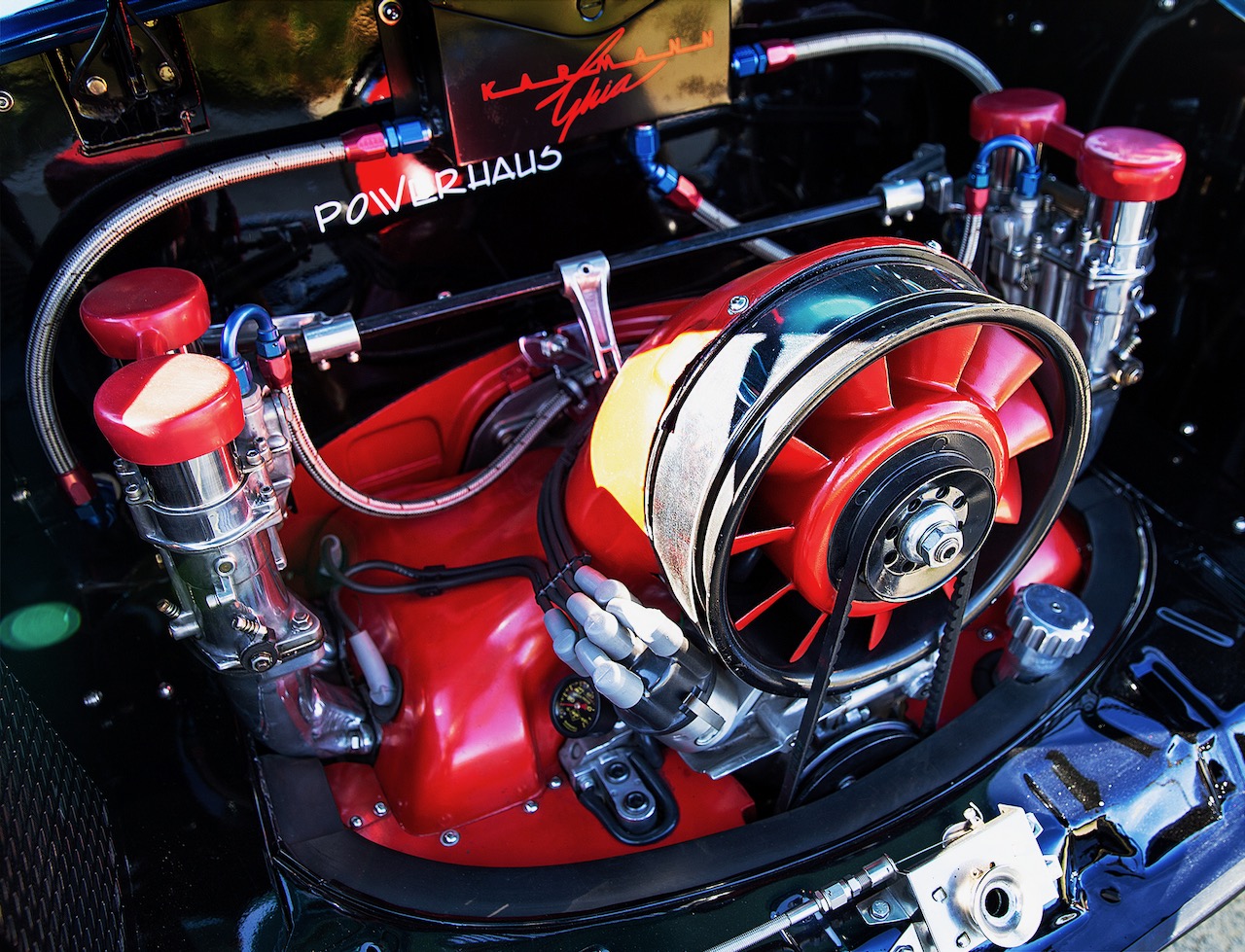 I discovered a number of sharp looking Karmann Ghias at Beach Day, but it was this ’71’s beautifully detailed motor swap that really impressed me. Here are the specs: A Porsche 914 2-liter was modified to 2.8 liters at Powerhaus in Torrance, CA. The lipstick red motor is outfitted with Italian 48 IDA Webers, plus a 911 fan and alternator. The 9.5:1 compression engine breathes-out through a 1 5/8-inch A1 Sidewinder exhaust system and produces 184 (SAE) horsepower and 186 (SAE) pound-feet torque. 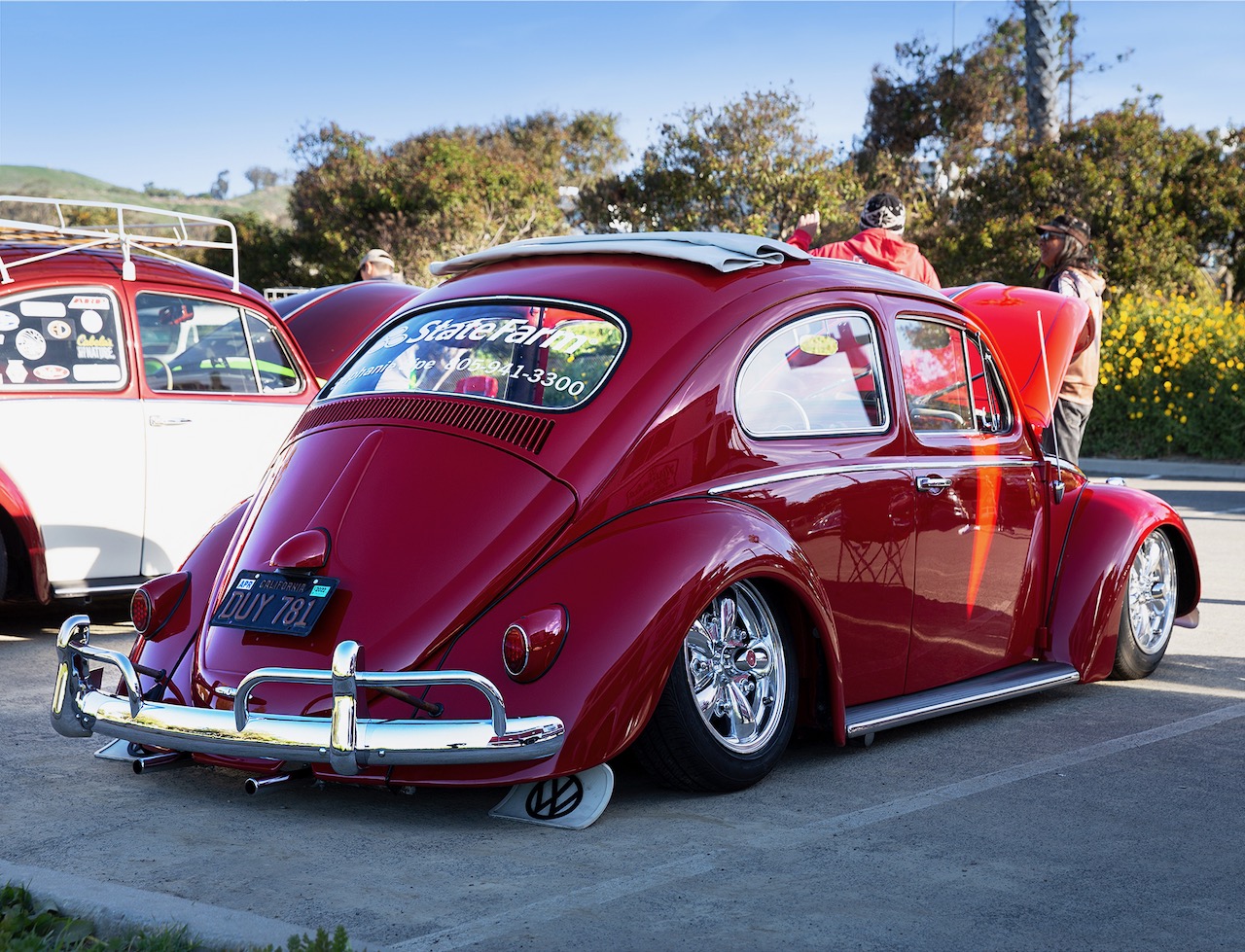 How To Sell Insurance: Buy a vintage VW. Restore it, slam it and shine it. Then drive it all over Ventura County making appearances at car shows and community events. In other words, “Build it, and they will call.” Such is the case with Stephanie and Chad Sipe whose State Farm Insurance business has seen an uptick in business since Chad put the finishing touches and their company phone number on their impressive, impossibly low, Tornado Red ’62 Beetle.

The license plate on his beloved VW reads “N D N JOE”. Standing guard in front of this metallic slate-blue Beetle was a big Rottweiler and a little white pig; fortunately, they were made of plaster! I introduced myself to Joe and went on to have a great conversation about fun-inducing German cars, Native Americans, and the California lifestyle. His dad, a Sioux Tribe member, moved the family from South Dakota to Oxnard, CA years ago to create a more promising future for the family. 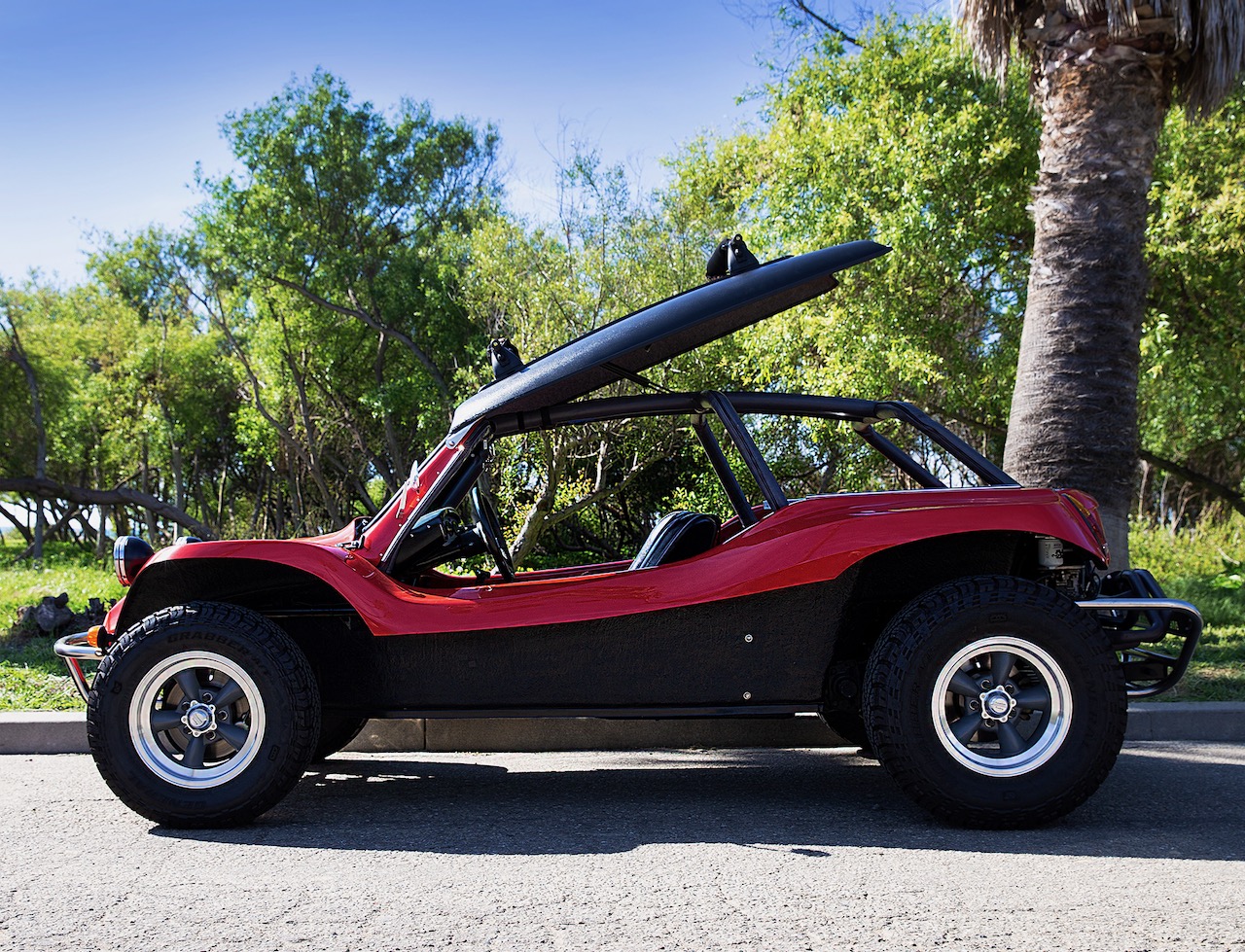 As I was getting ready to leave this enjoyable VW Beach Day, I heard an amplified rumble of horizontal cylinders. I turned around to catch a colorful caravan of Meyers Manxes rolling into the VVV event area. These were the show-boaters, the hooligans, the desert racers of the larger VW family. This particular Red Manx is a “Manxster” which has a 14.5-inch longer wheelbase than the original Manx and can seat up to four passengers. It is more stable and rigid than its smaller brother – especially at higher speeds – thanks to the carefully-angled roll cage that’s bolted to the body in six places. Bruce Meyers, who designed the original Manx kits to bolt to shortened VW Beetle chassis, passed away a little over a year ago at the age of 94. Like so many in the VW and car enthusiast communities, he was someone who knew how to have fun. Carpe diem!

Many thanks to Heather and Reed Cowan for their tireless efforts in getting the Ventura Vintage Volkswagens events rockin’ & rollin’ – and to Chemo Ordaz and his fellow club members at Wolfsburgs Finest VW Club for giving me all the time I wanted to get the scoop on their wicked rides.