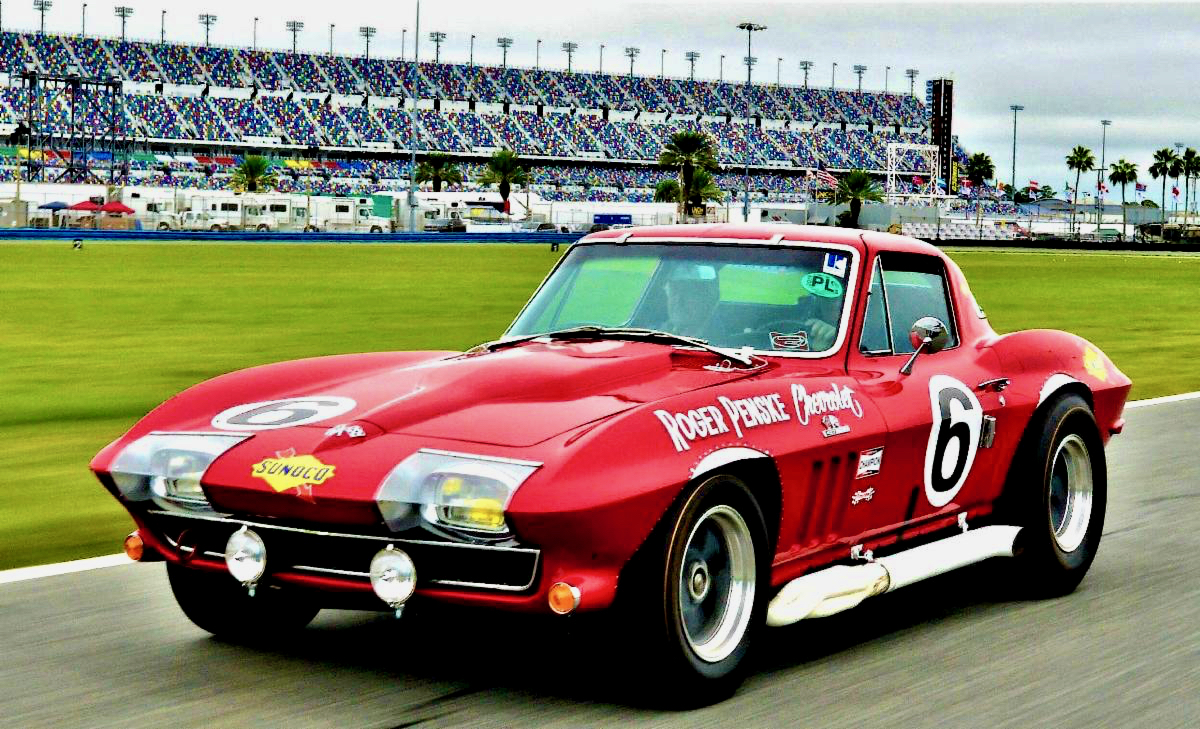 Thanks to Fabulous Restorations, a mouth-watering recreation of Penske Racing’s first race car, the L88 Corvette that scored The Captain’s first win as a team owner in its debut in the 1966 Daytona 24 Hour Continental – now the Rolex 24 At Daytona. It’s now on display at the Motorsports Hall of Fame of America in Daytona Beach.

This is the famous “flashlight” car, which would give motorsports fans one of the earliest glimpses of the preparedness and race craft that would make MSHFA Class of 1995 inductee Roger Penske one of the top field generals in the sport’s history.

“Although the original chassis exists today, it’s been restored to a later configuration and livery,” said MSHFA President George Levy. “No one has seen this version of this incredibly historic machine, the first Penske Racing car, in over a half-century. Its arrival now is especially fitting in light of Mr. Penske’s announcement that he intends to return to endurance racing in 2023 to seek victory at the 24 Hours of Le Mans, perhaps the last major prize missing from his blue-chip 60+ year resume.”

A lot was riding on the Corvette’s success in the 1966 event. It was the first year the Daytona Continental would run a full 24 hours. The first race for Penske Racing, Roger having retired from a successful driving career a year earlier. It was also the racing debut of MSHFA Class of 2023 inductee Zora Arkus-Duntov’s new 427 cubic inch L88 Corvette. In fact, Penske’s was the first L88 off the assembly line in St. Louis, an early preview of the upcoming 1967 production model. And it was the beginning of what would become a hugely successful 16-year relationship between Penske and Sunoco. 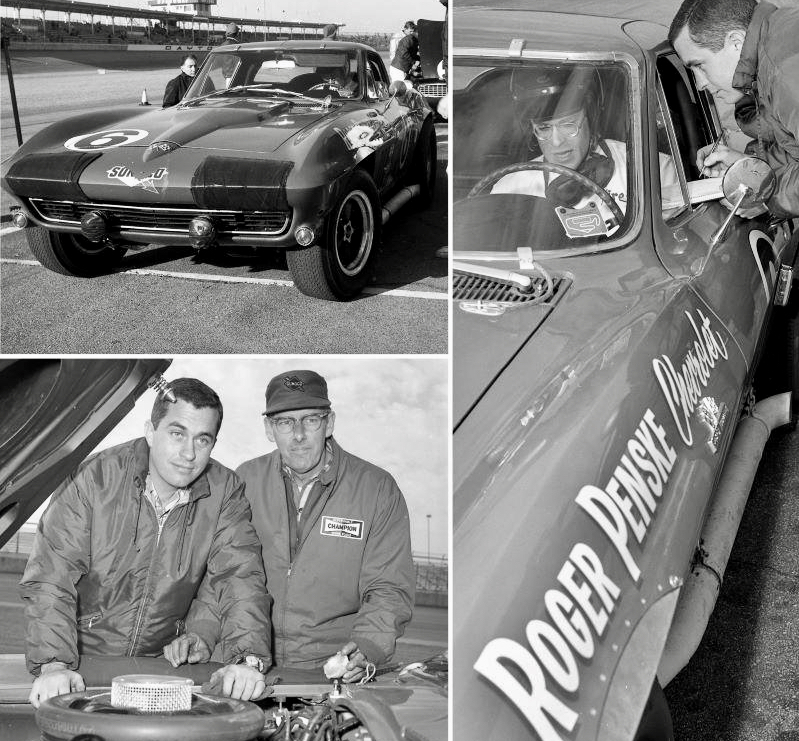 In addition to its aluminum-head 427 cubic inch engine, Penske’s L88 featured the factory competition package which included special brakes, suspension and exhaust, an M-22 transmission feeding a prototype 2:73 Positraction rear axle, and jumbo 36-gallon fuel tank. The most distinctive visual cues were the “off-road” side exhaust and a prototype cowl-induction hood.

Driver Dick Guldstrand picked up the Rally Red Corvette in St. Louis on January 14, 1966 and drove the heater-less car in frigid temperatures to the Penske shop in Newtown Square, PA for race-prep. In addition to special rectangular high-intensity Marchal headlights and a pair of Lucas Flamethrower fog lights, the team installed fender flares to cover the extra-wide racing tires.

Once at Daytona, the scrutineers nixed the flares, so the team removed them and riveted small aluminum lips to cover the tops of the tires. No matter. The L88 still was the fastest qualifier of all the GT cars, made even stronger by the substitution of a Traco-prepared L88 engine for the factory unit. In the race, the front end of the car was shorn off in an accident. One headlight was gone completely, the other knocked out of commission. The radiator, too, had suffered terminal damage.

To fix the radiator problem, the team loaded it with Stop Leak to buy enough time to borrow a replacement from a spectator’s Corvette that Roger had pre-arranged to serve as a donor car if spare parts were needed. Freezing overnight temperatures in Daytona that February 5-6 likely aided the cause. 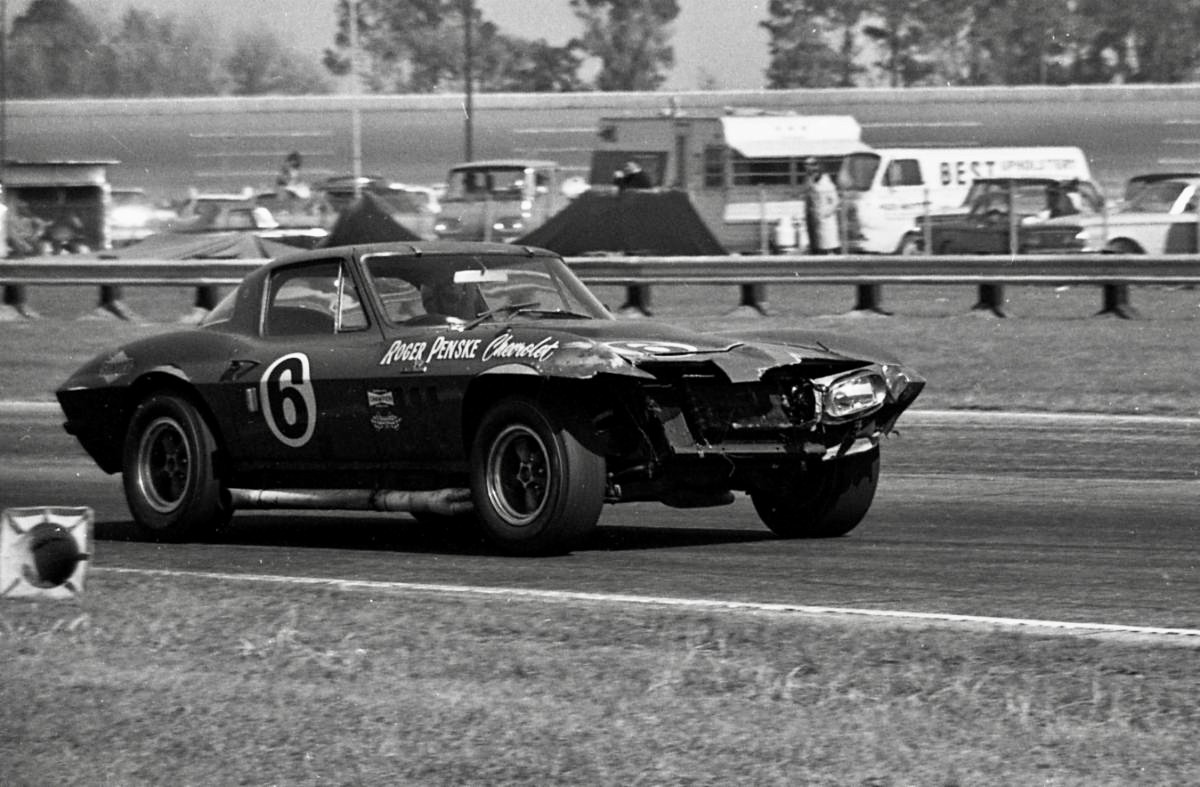 The headlights required a little bit bigger improvisation. The officials refused to allow the Corvette to return to the track without headlights. But the rules, Penske determined with lightning speed, didn’t specify what kind of headlights or how bright they had to be. So, Roger being Roger, he instructed the crew to duct-tape two flashlights to what was left of the front fenders and return to the fray.

The officials might not have been thrilled, but the flashlights met the letter of the law, and any lingering debate became moot after the sun came up. Until then, the drivers were careful to follow close behind cars whose path forward was being lit by more powerful light sources.

Shortly after the Daytona race, the car was repaired and repainted Sunoco Blue with yellow accents — what would become Penske Racing’s signature livery in the Trans-Am, Indy, early Can-Am and 24 Hours of Le Mans. It won its class at Sebring where it finished ninth overall and survives in that livery today. 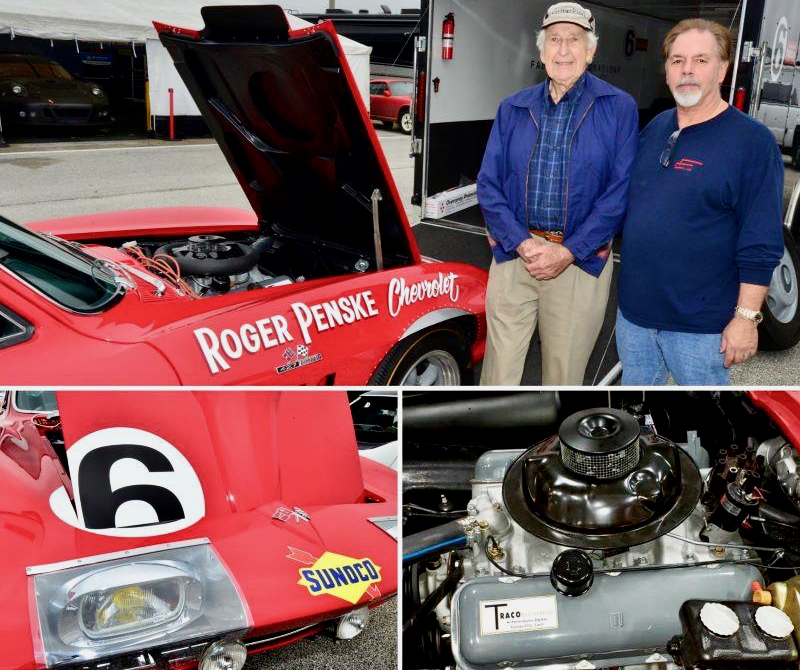 We asked George Haddad, President of Fabulous Restorations in Fort Lauderdale, FL, a shop known for meticulously accurate restorations of street and competition cars, why they chose to recreate this one.

“Because the car doesn’t exist any longer (in this original form) and because it’s a car that Gib Hufstader was mainly involved in and we wanted to do a tribute to Gib,” Haddad said.

Hufstader is a legend in Corvette circles. The retired Chevrolet engineer and longtime amateur racer worked closely with Zora Arkus-Duntov on Corvette programs in the 1960s and 1970s, including exploration of a mid-engine 4WD variant. It was Duntov who sent Hufstader to Daytona to assist with the Penske effort in an “unofficial” capacity. General Motors policy forbade direct involvement in motorsports, so engineers who went to races in situations like this did so while “on vacation.”

The lengths to which Haddad went to replicate the Penske car are mindboggling. The headlights, for example, were obscure Marchal units from the 1960s, almost impossible to find today. Haddad noticed how similar they looked to the ones Peter Brock (MSHFA Class of 2022) had selected for his late 1960s Triumph TR250K concept car. Gayle Brock referred Haddad to Tony Garmey, who had restored the Triumph at his Horizon Racing & Performance shop in Maple Valley, WA. 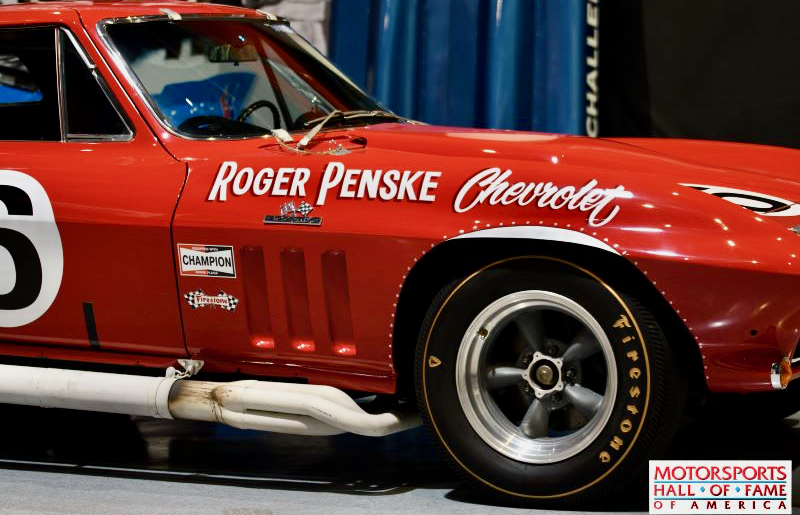 “So, I contacted Garmey,” Haddad said. “We discovered the Triumph headlights were very close but not correct. But he connected me with a gentleman who finds and sells antique headlights. It took him about six months, and he found the headlights brand new in a box in somebody’s garage in France.”

Haddad even exactly replicated the holes on each fender drilled for the disallowed fender extensions and fabricated the aluminum lip flares the scrutineers looked more favorably upon. The smaller flares wouldn’t cover the wider rear tires Roger wanted to run, so the car began and ended the race on the narrower rubber. What tires the car ran between those two stints is the stuff Penske legends are made of!

One of the most satisfying moments for Haddad came when he shared the TRIBUTE: PENSKE’S DAYTONA-WINNING L88 CORVETTE with Hufstader, Sunoco’s Bill Preston, who doubled as a pit crew member for the race, and Wintersteen at DIS in 2020, 54 years after the original car’s historic victory there.

“They had all anticipated completion of the car. I had been sending pictures on and off to everybody so they could see the progress,” said Haddad. “When they showed up at Daytona, Gib had the hugest smile on his face and Bill Preston as well. It was a really terrific day.”

“I thought George had done a terrific job of recreating the car,” the now 92-year-old Hufstader told us. “He had researched it enough to know the things he did were factual. I was impressed with it.”

For Preston, too, it was like time-traveling back to that February weekend in 1966.

“I watched George roll it off the trailer and fire it up for the first time,” said Preston, now 91, “and, of course, the memories come flooding back to you. Then I looked it over and Gib had told me it was going to be as accurate as he and the other guys could possibly make it. In my memory it was exactly like the (original) car.” 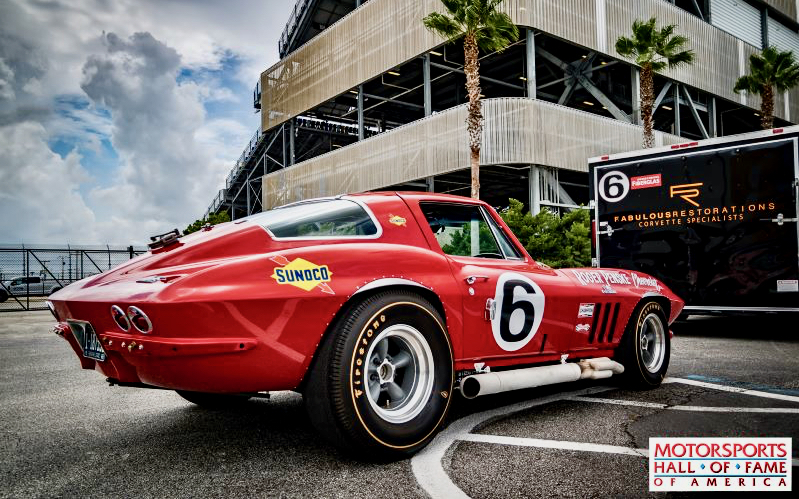 “When you compare period photographs of the original to the Fabulous Restorations version, it’s hard to tell them apart,” added Levy, “even down to the hand-painted ‘Roger Penske Chevrolet’ script on the fenders. “We think the thousands of guests who visit the Hall of Fame each week will appreciate the opportunity to see this historic ‘missing link’ Corvette for the very first time.”

The TRIBUTE: PENSKE’S DAYTONA-WINNING L88 CORVETTE is expected to stay at the Hall of Fame through the 35th Annual Induction Ceremonies on March 6 – 7, 2023. A large gathering of racing Corvettes with Daytona history is being planned during the ceremonies in honor of new inductee Zora Arkus-Duntov. A limited number of tickets will be available to the public.

The MSHFA is housed in Daytona International Speedway’s Ticket and Tours Building, located in front of the famed 2.5-mile DIS tri-oval. Access to the MSFHA museum is included with every Daytona International Speedway tour, which run throughout each day, or as a museum-only ticket. The museum is open daily 10-5 nearly year-round except major holidays.

Photos of the recreated L88, including the one of Gib Hufstader (l) next to Fabulous Restorations’ George Haddad (r), courtesy of Walt Thurn. Photos from the 1966 Rolex 24 at Daytona, including Roger Penske leaning to talk to driver Wintersteen, and Roger standing next to Sunoco’s Bill “Scotty” Scott who Preston believes was the first man to call Penske “The Captain,” courtesy of the NASCAR Archives & Research Center

For more information about the Motorsports Hall of Fame of America, please visit https://www.mshf.com/