Skip to content
One of the highest-quality and most eclectic shows in the country celebrates its 18th year. Mike & Maureen Matune bring us highlights. 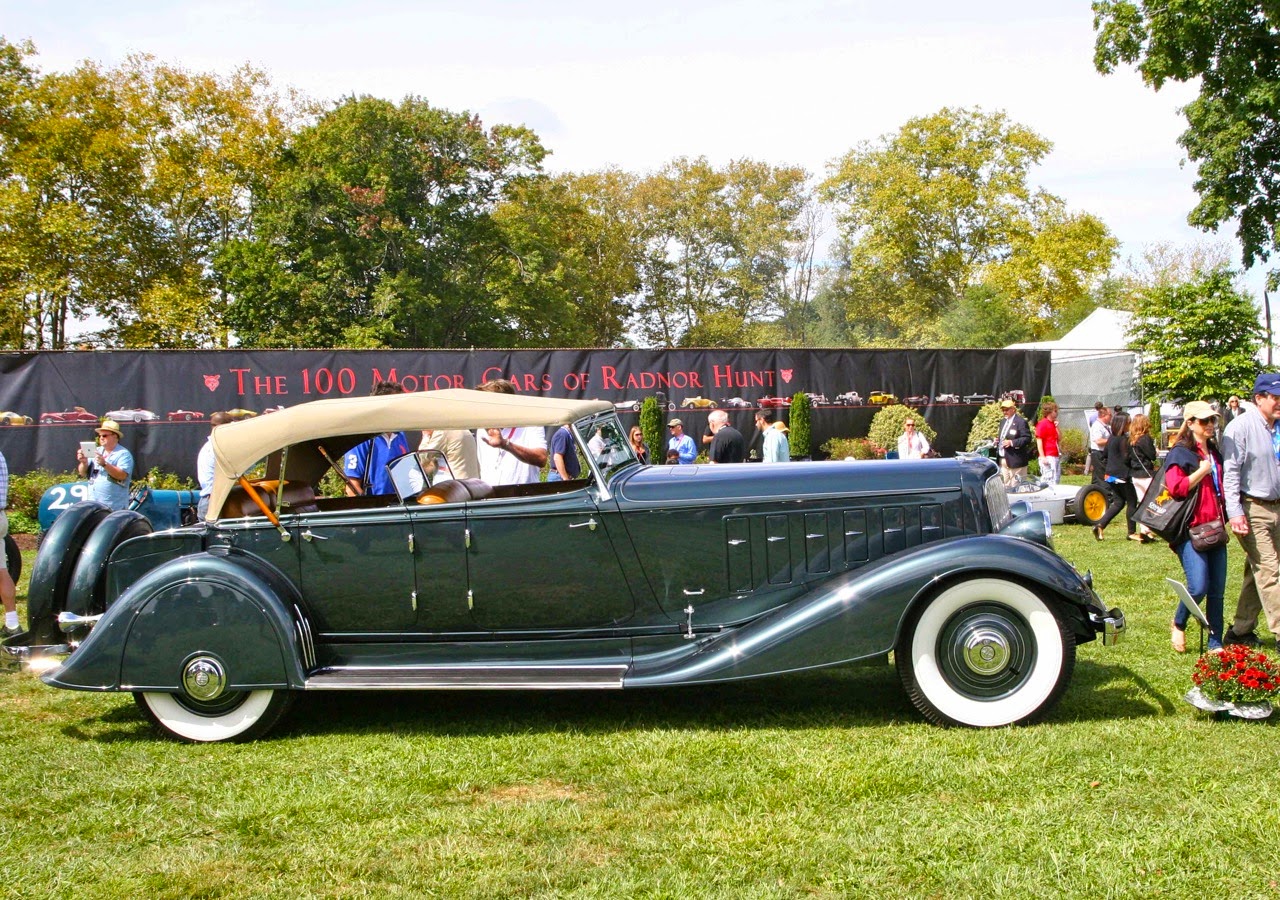 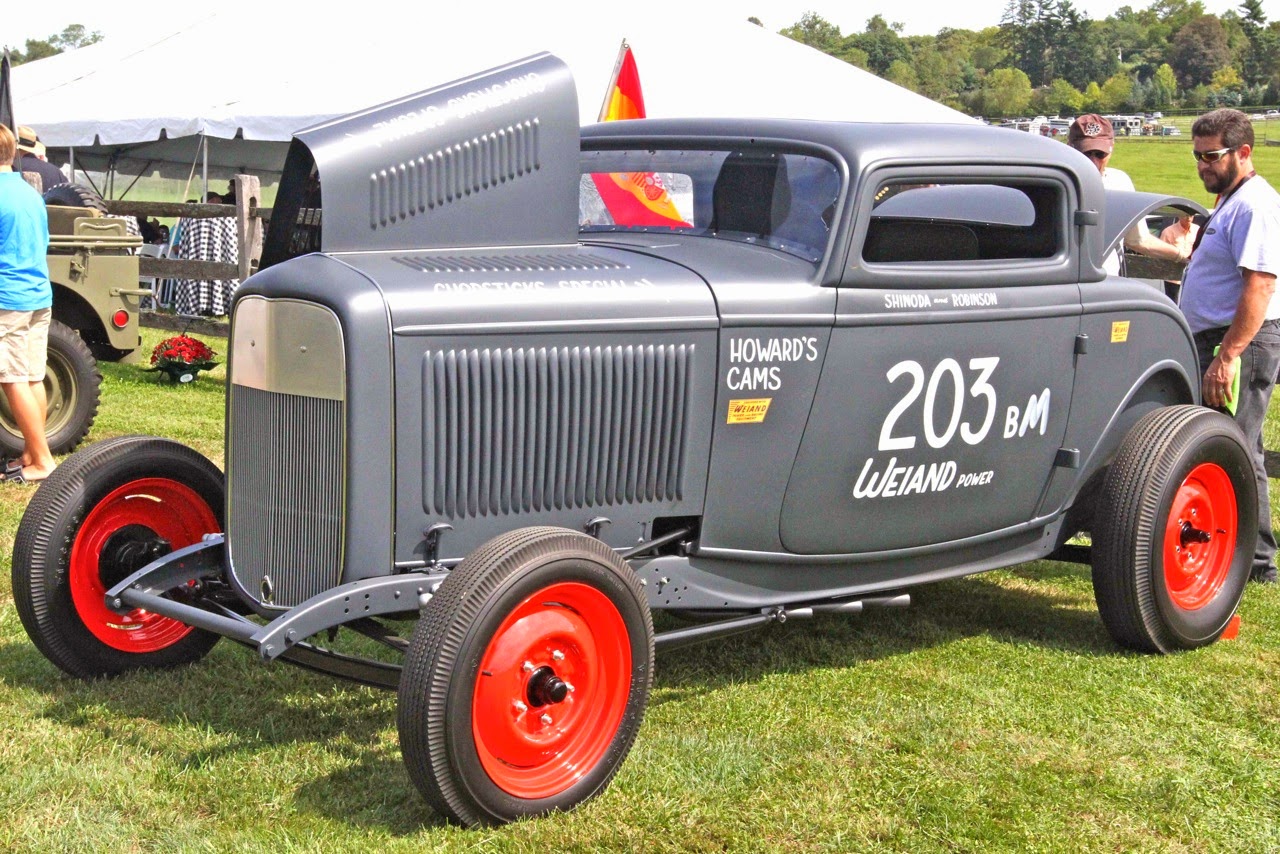 No show of Ford racing is complete without examples of Flathead power. Henry’s V-8 would go on to power everything including Salt Flats competitors, drag racers, sports cars and boulevard cruisers of every description. Representing those times is Larry Shinoda’s “Chopsticks Special,” above. Shinoda spent time in a Japanese Internment Camp in California before going on to become a noted designer at GM (Corvette Sting Ray) and Ford (Mustang Boss 302 graphics). Today the car resides in Beth & Ross Myers’ 3 Dog Garage collection. 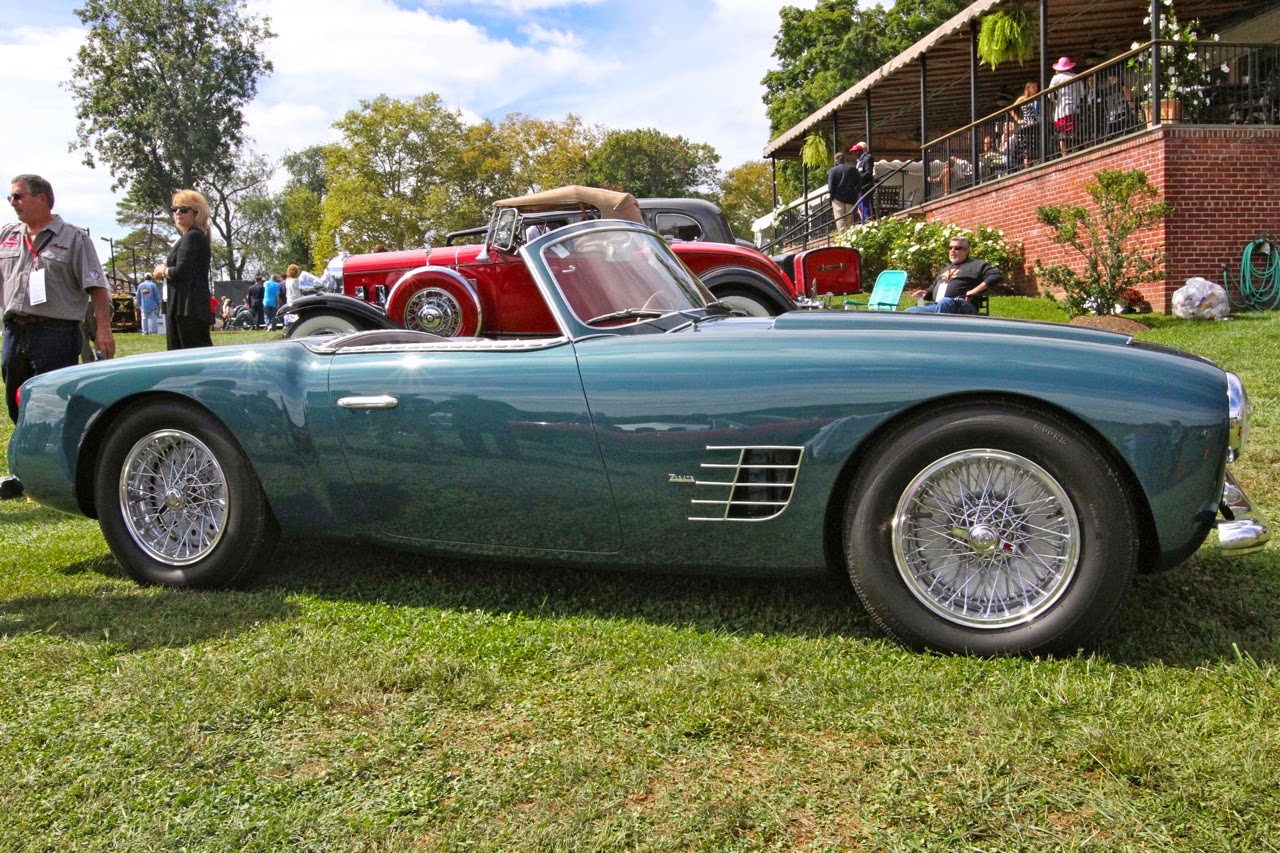 Best of Show Sport win went to Oscar Davis’ ‘54 Maserati A6G-2000 Zagato Spider. Juan Perone saw it at the Geneva Auto Show in 1955 and had it shipped to Argentina. After its return to Zagato, it was again shown at the Paris Auto Show. In addition to its striking styling, it is powered by a twin-plug DOHC Maserati straight six 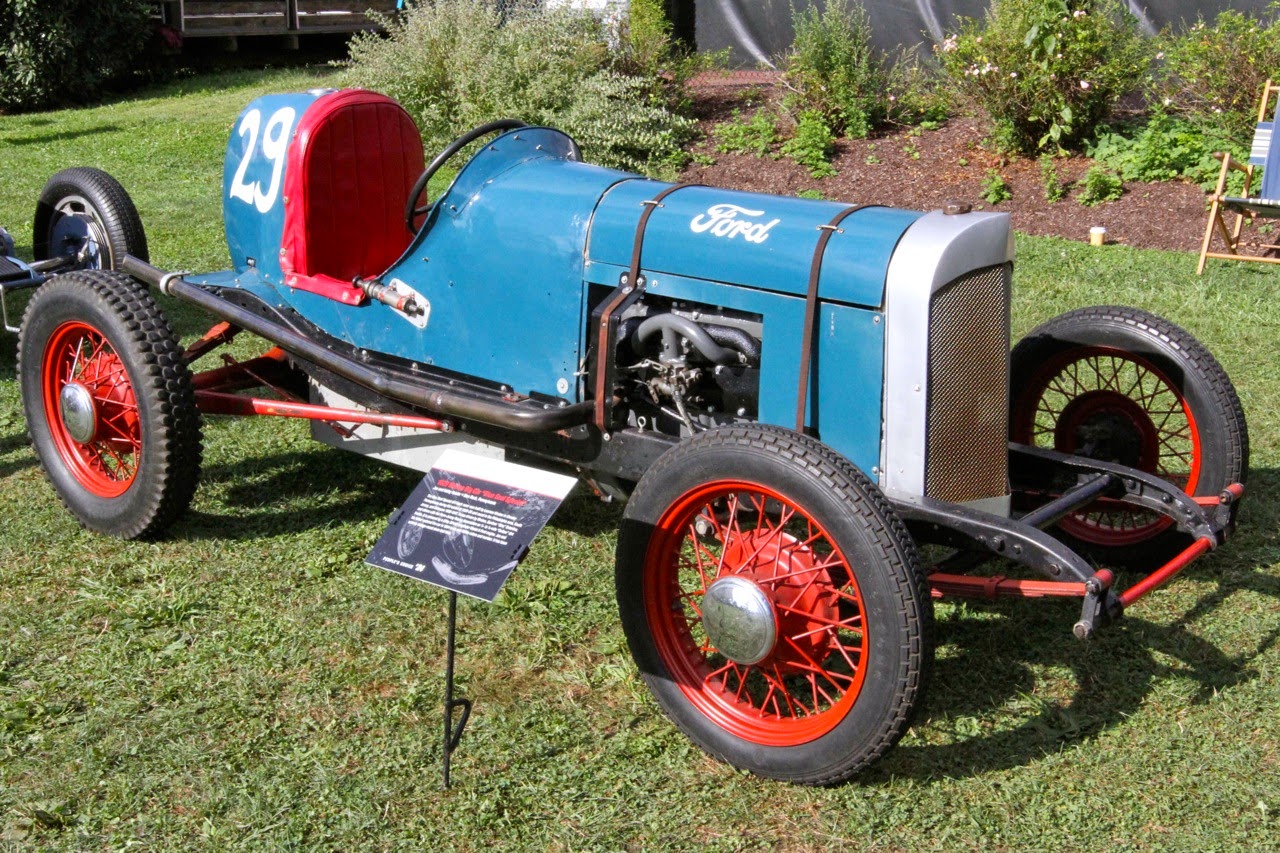 Among the featured groups this year was a class titled simply “Powered by Ford.” It allowed the viewer to trace the history of Ford racecar development and involvement in the sport starting with Kathy and Joe Heisler’s ‘29 Wroton Big Car, the “Blue Seal Special.” Powered by a four-cylinder 55 horsepower Model A engine, it was raced on dirt tracks throughout the Pennsylvania/New Jersey area. It rests on altered 1920s Chevy suspension and frame rails. 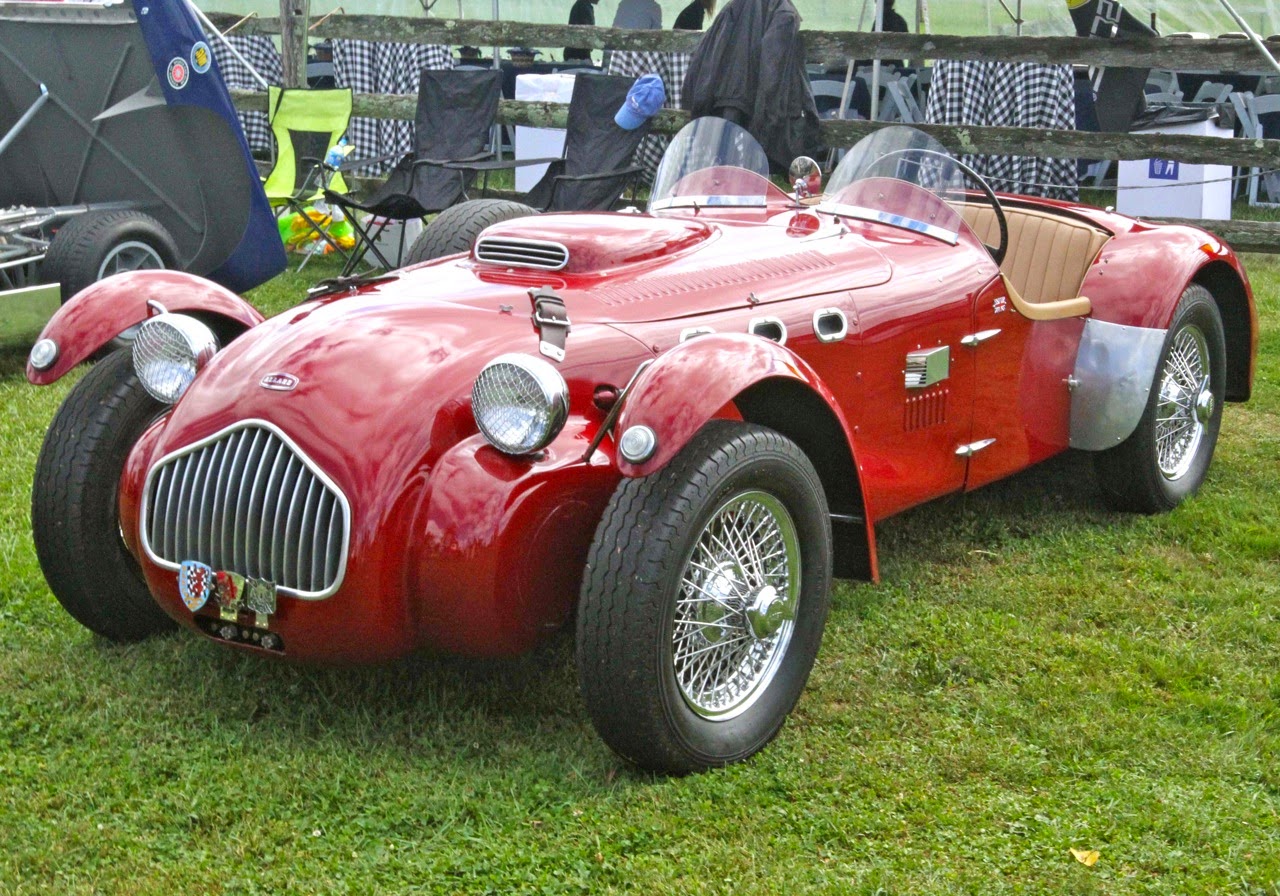 Although David Markel’s ‘53 Allard J2X began life Cadillac powered, it was converted to a 289 Ford and four-speed in the 1960s. The J2X was a successful racer in the early years of sports car racing immediately following WW ll. Many were imported without engines and fitted here with a variety of GM, Ford and Chrysler powerplants. Markel went home with the Chairman’s Award for Sporting Excellence. 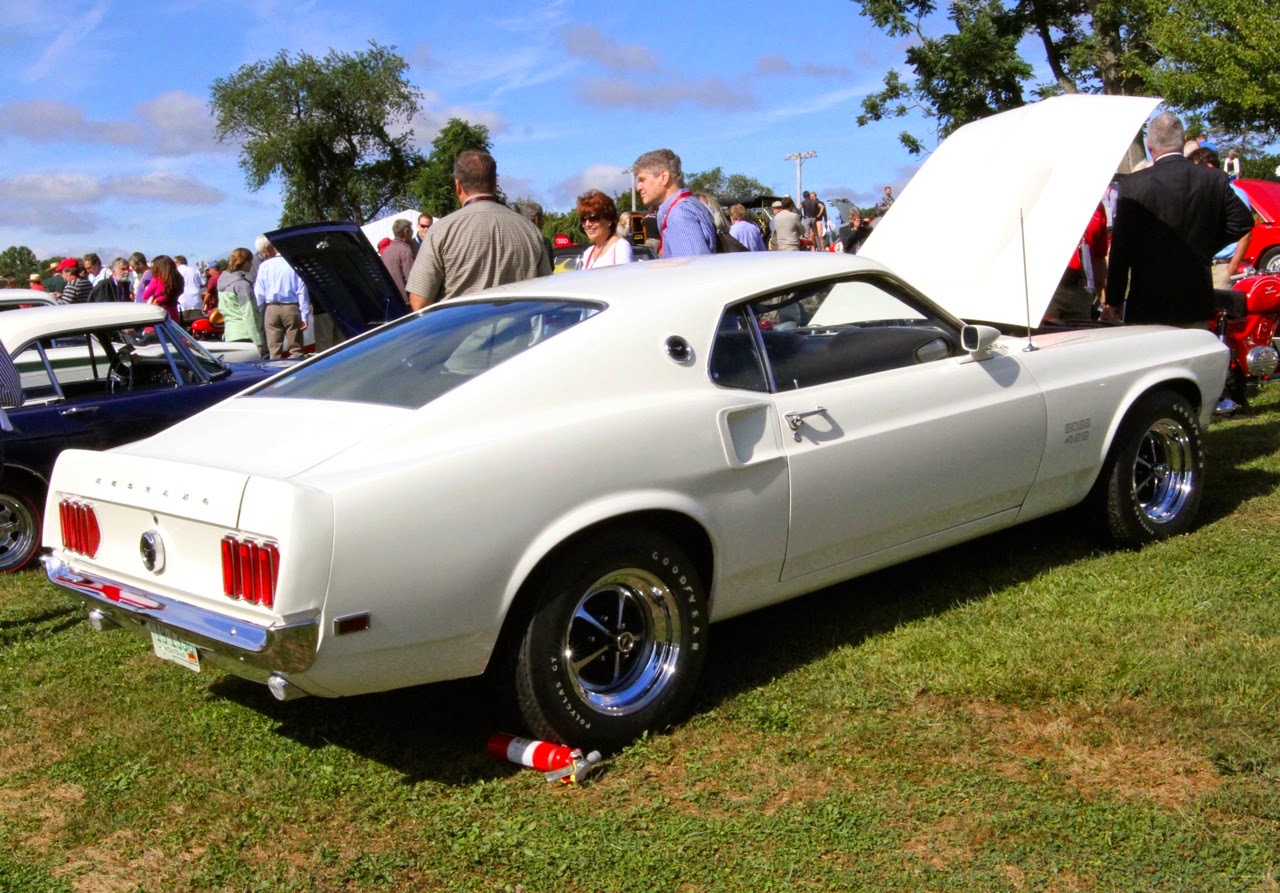 Let’s move forward into the ‘60’s and the Ford “Total Performance” program which saw the Blue Oval race and triumph in a number of racing venues all over the world. The racing program resulted in countless storied products. One example is Leland Cross’ ‘69 Boss 429 Mustang. Cross’ example has covered just 120 miles and is a true time capsule. Small wonder it captured the Historic Vehicle Association’s Most Well Preserved Vehicle Award. 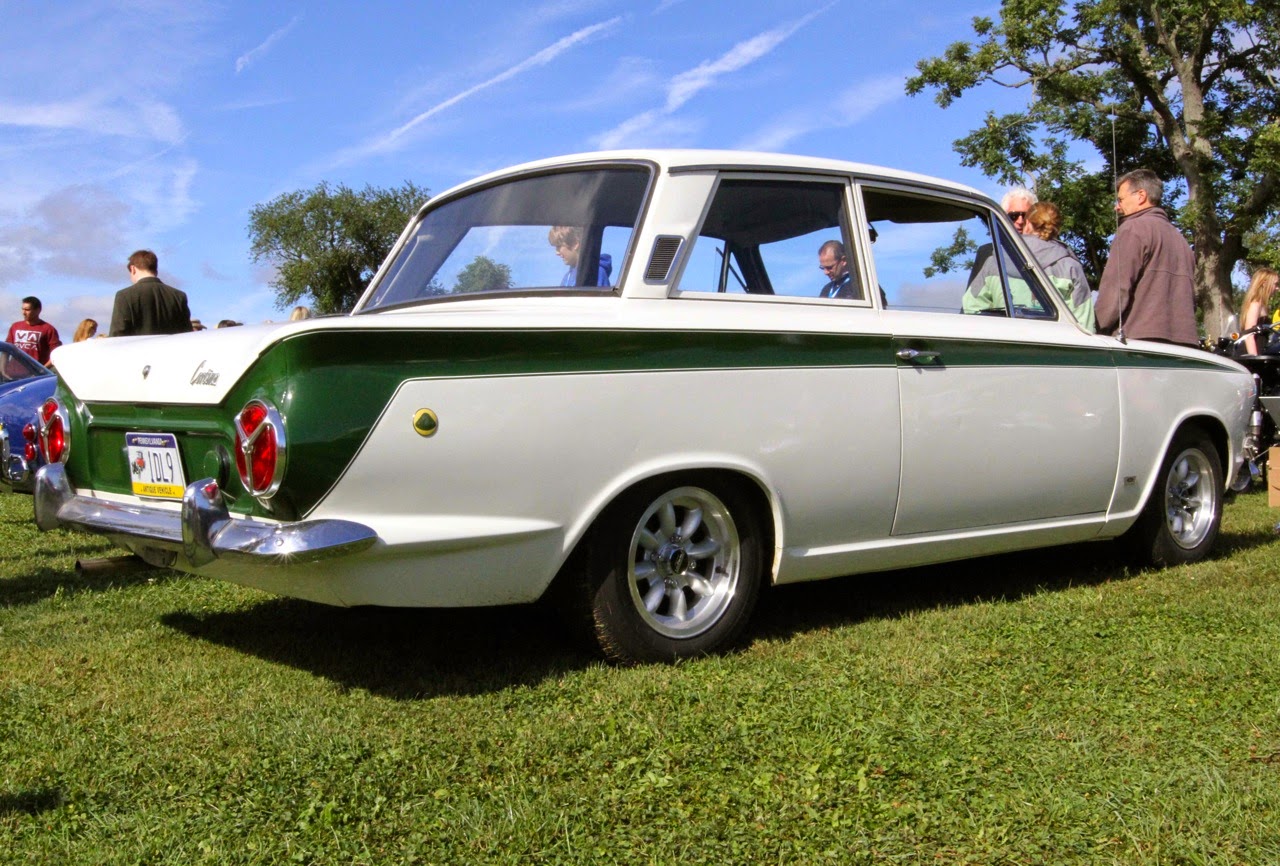 “Total Performance” wasn’t restricted to this side of the Atlantic. Ford’s UK subsidiary enlisted the help of no less than Lotus engineering and racing ace Colin Chapman to turn its plebeian Cortina into an all conquering sedan racer. The Lotus Cortina enjoyed success in sedan racing wherever it was entered. The cars featured a Lotus designed dual overhead cam head, Weber carbs, suspension upgrades and lightweight body panels. 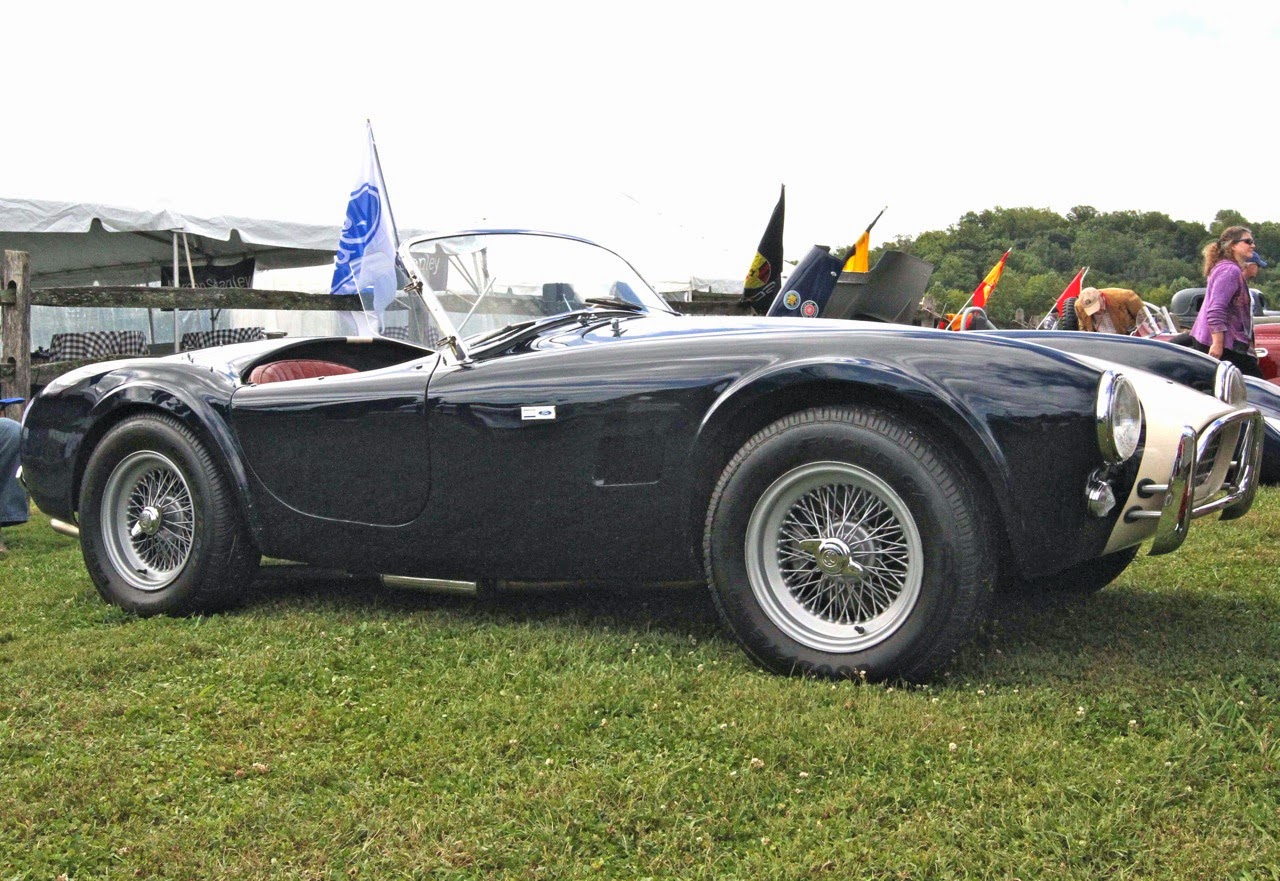 No discussion of “Total Performance” would be complete without a discussion of Carroll Shelby’s Cobra. His winning racecars propelled Ford to the forefront of international competition. While James Shacklett had his Cobra repainted, he was careful to preserve its engine, undercarriage and interior. 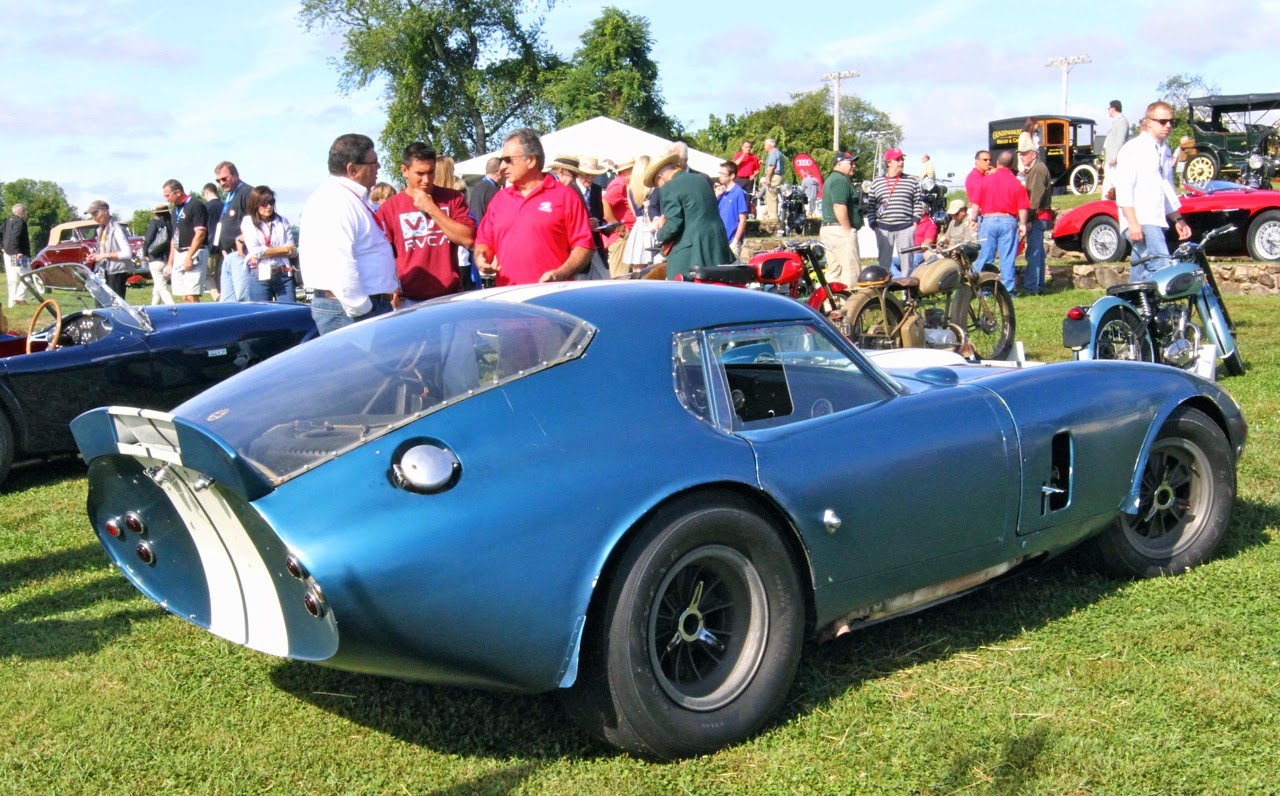 Designed by Peter Brock, the Daytona Cobra Coupe was a successful attempt to streamline the Cobra roadster. It worked and helped Shelby American win the 1965 FIA GT World Championship. The Simeone Foundation Museum’s example was the first of the six coupes constructed. It also set numerous FIA/USAC speed records at Bonneville. 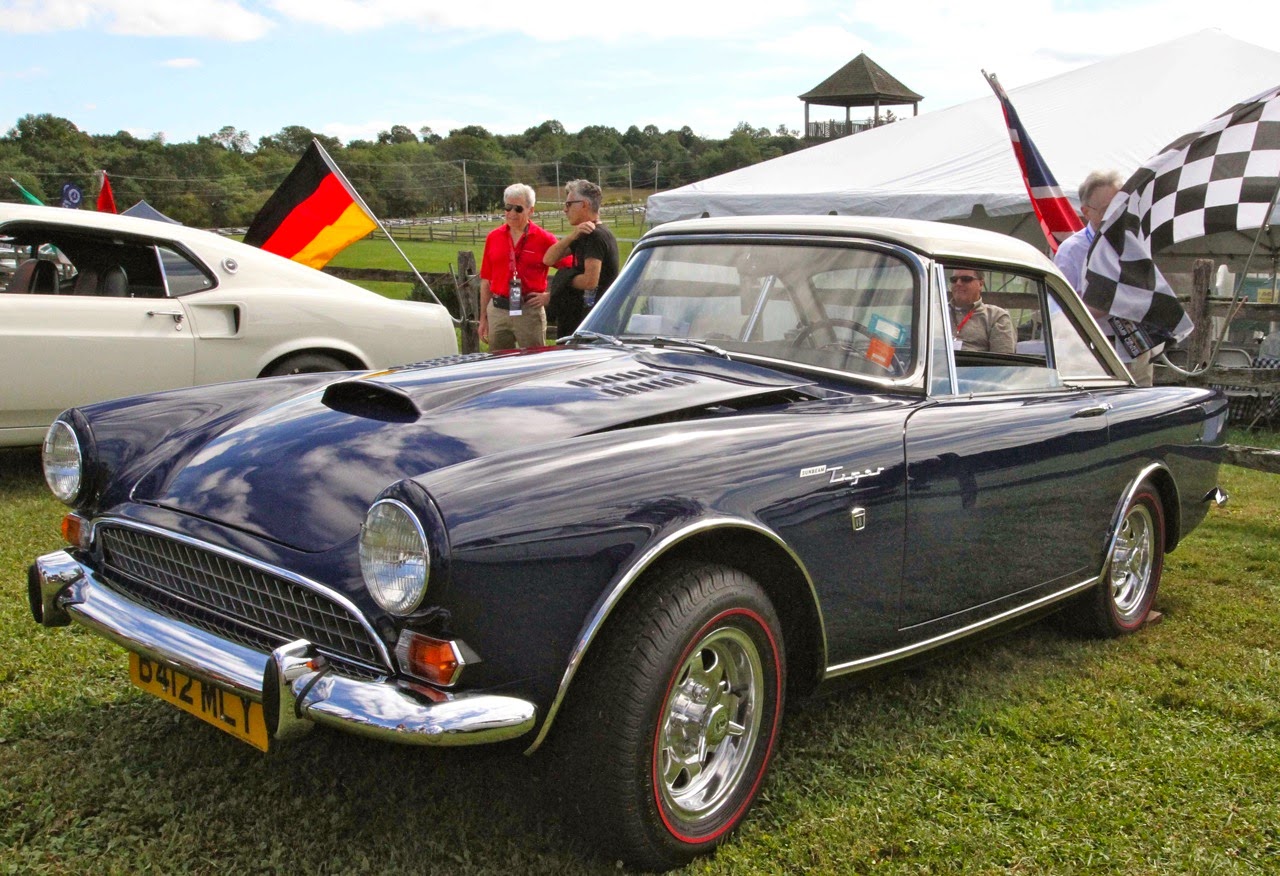 Combining European chassis and American engines is an oft-played concept. Among its practitioners was the Rootes Group that needed a way to upgrade the performance of their Alpine roadster. They chose to equip the car with a Ford V-8 and call the result “Tiger” after their 1920s LSR car. Rob Barnes’ car is a well-equipped street example. 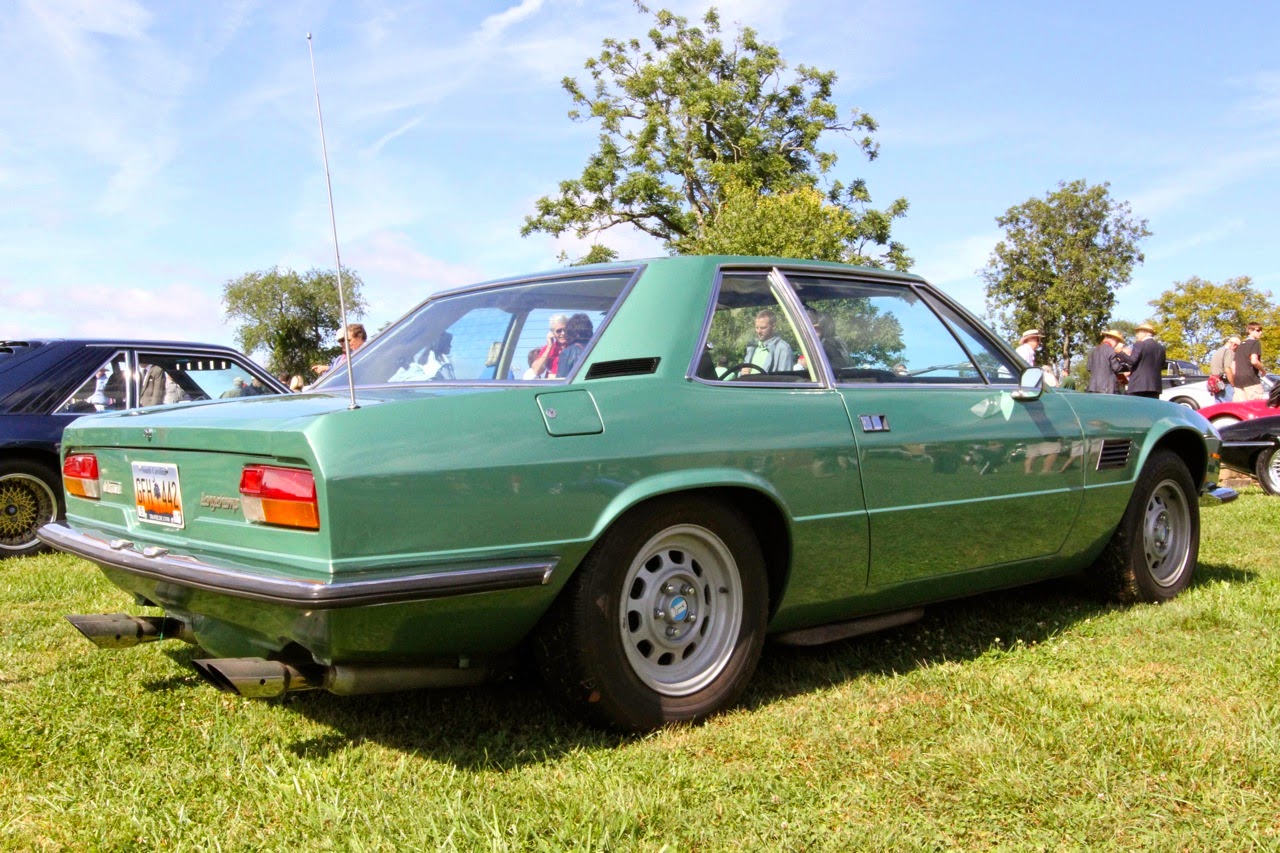 Let’s not leave the concept of Ford-powered European chassis just yet. Walter Eisenstrak exhibited this ‘74 DeTomaso Longchamp with a 351 Ford under its hood. This DeTomaso’s journey began in an Italian factory and moved to Lebanon before coming to the U.S. While its numbers are few, Eisenstark quipped that at about 400 built, it was nearly a mass produced car by coachbuilder standards! 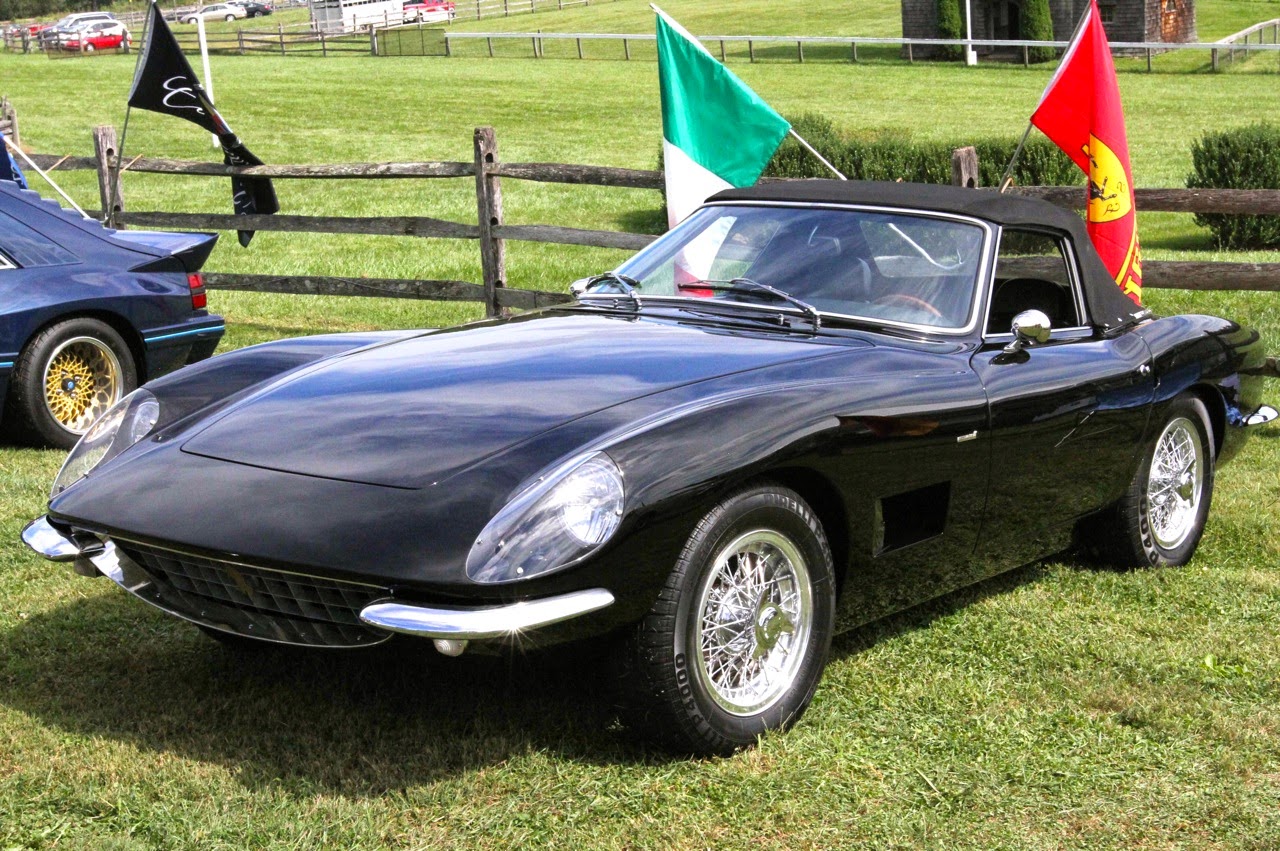 Another Italian builder who sought to capitalize on the “Power by Ford” concept was Intermeccanica. Between 1968 and 1972 they built approximately 400 Spyders; marketing them under Torino and Italia. Its lines were so clean and eye-catching; John Redmond’s 1971 version would leave with the Artist’s Award for representing the epitome of design and style; as well as a Hagerty Junior Judges Choice Award. 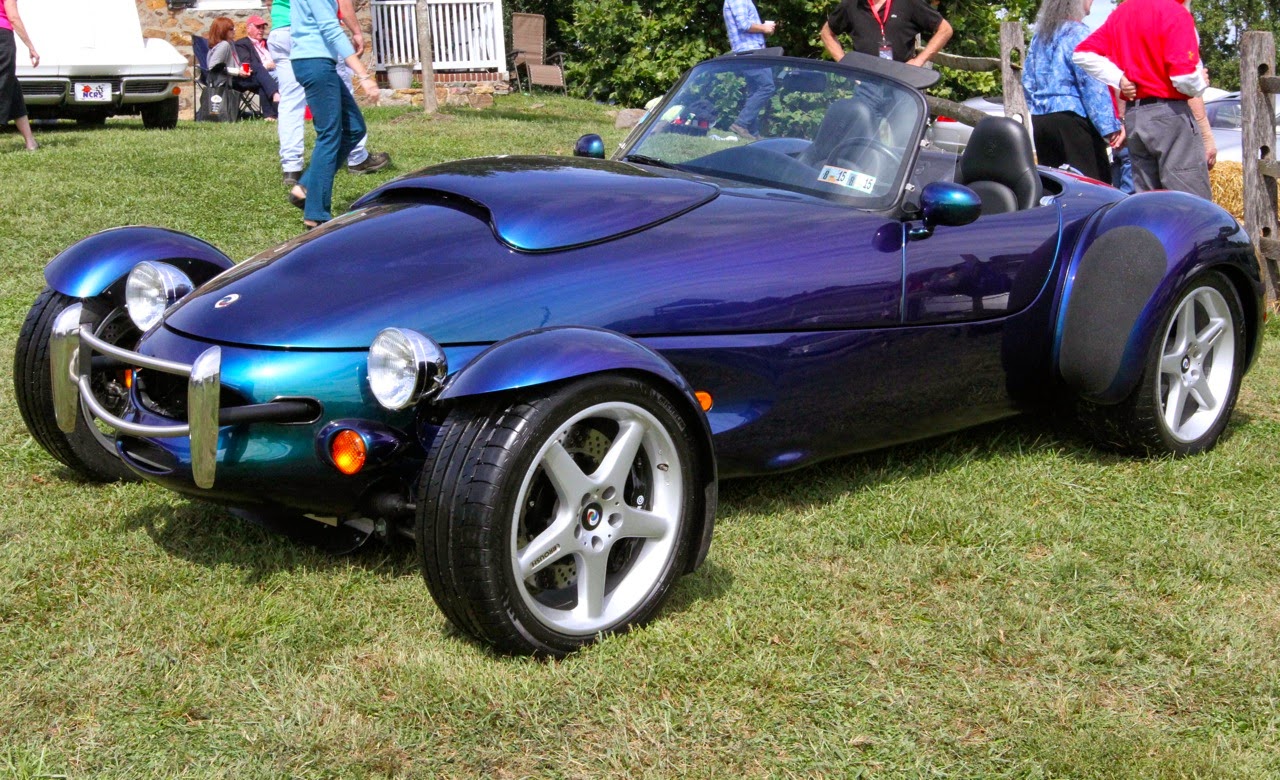 Here’s another example of a vehicle with a lightweight chassis and Ford power: Panoz AIV (Aluminum Intensive Vehicle) Roadster. Built in Braselton, GA by Panoz Auto Development, they combined a Ford four-cam Mustang Cobra V-8 with a minimalist body. Dr. Jonathon Schraf bought this one new and showed it beautifully at Radnor Hunt, taking home the People’s Choice Award for his efforts. 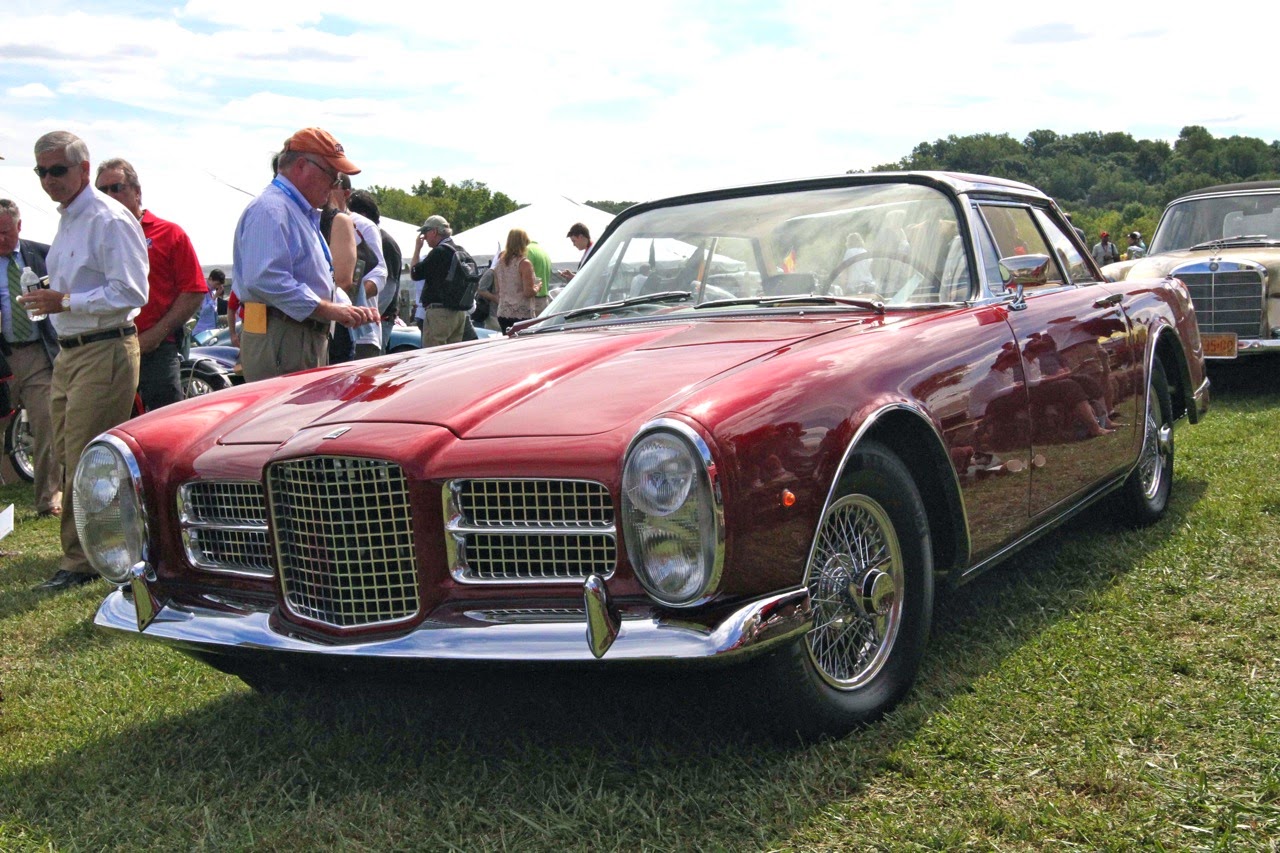 To keep this from becoming too Ford Centric we had to include Ken Swanstrom’s ‘62 Facel Vega Facel II Coupe. These were French made and in the same vein as the other European Chassis/American engine cars as shown here, but with a twist, Chrysler power. In this case it is a 413-inch, twin four-barrel Chrysler wedge. Less than 200 were produced. 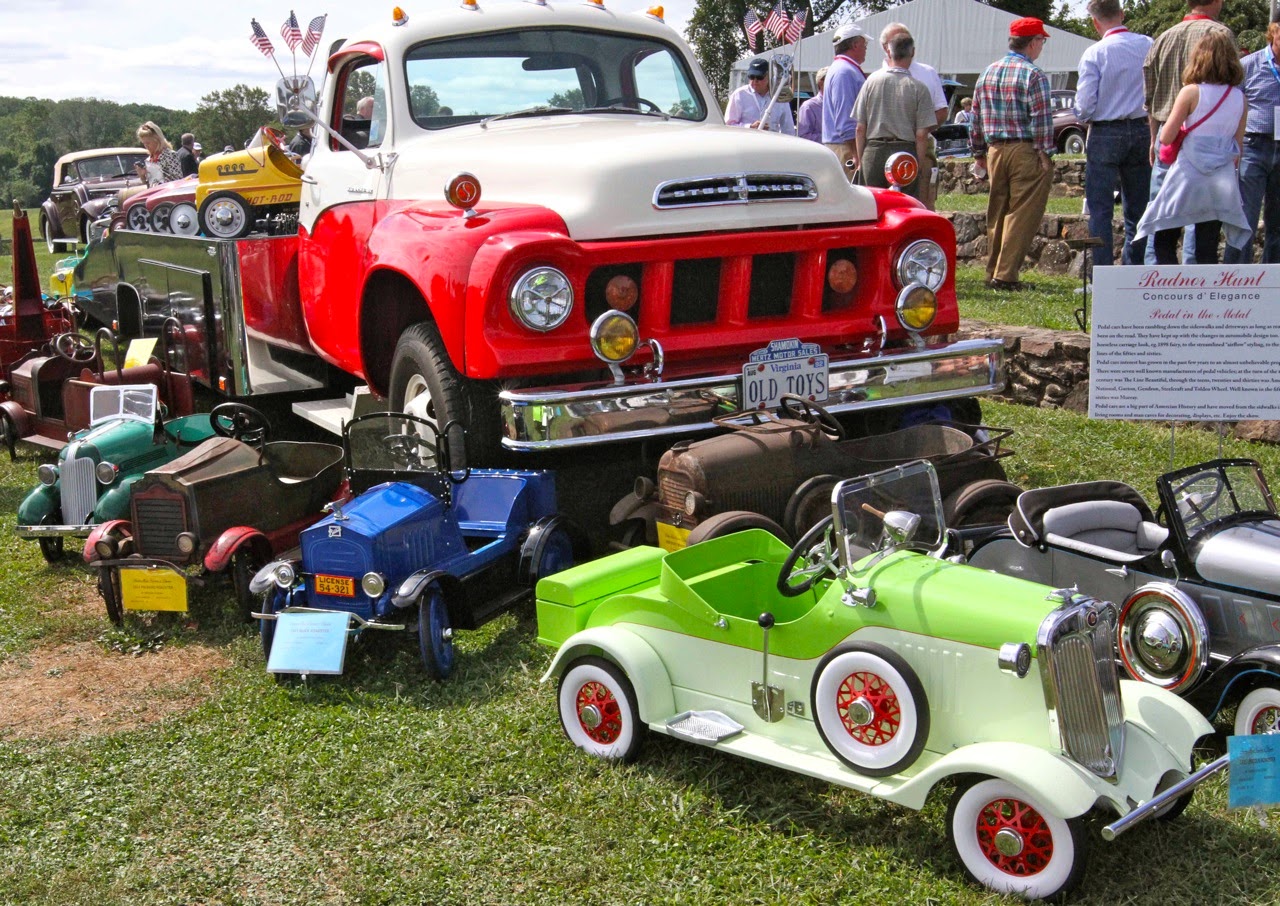 You never know what you are going to come across at a Concours. Check out this Studebaker ramp truck full of pedal cars. These ranged all the way from pristine, highly restored to  Preservation class examples. These brought smiles all around and doubtlessly conjured up many a childhood memory. 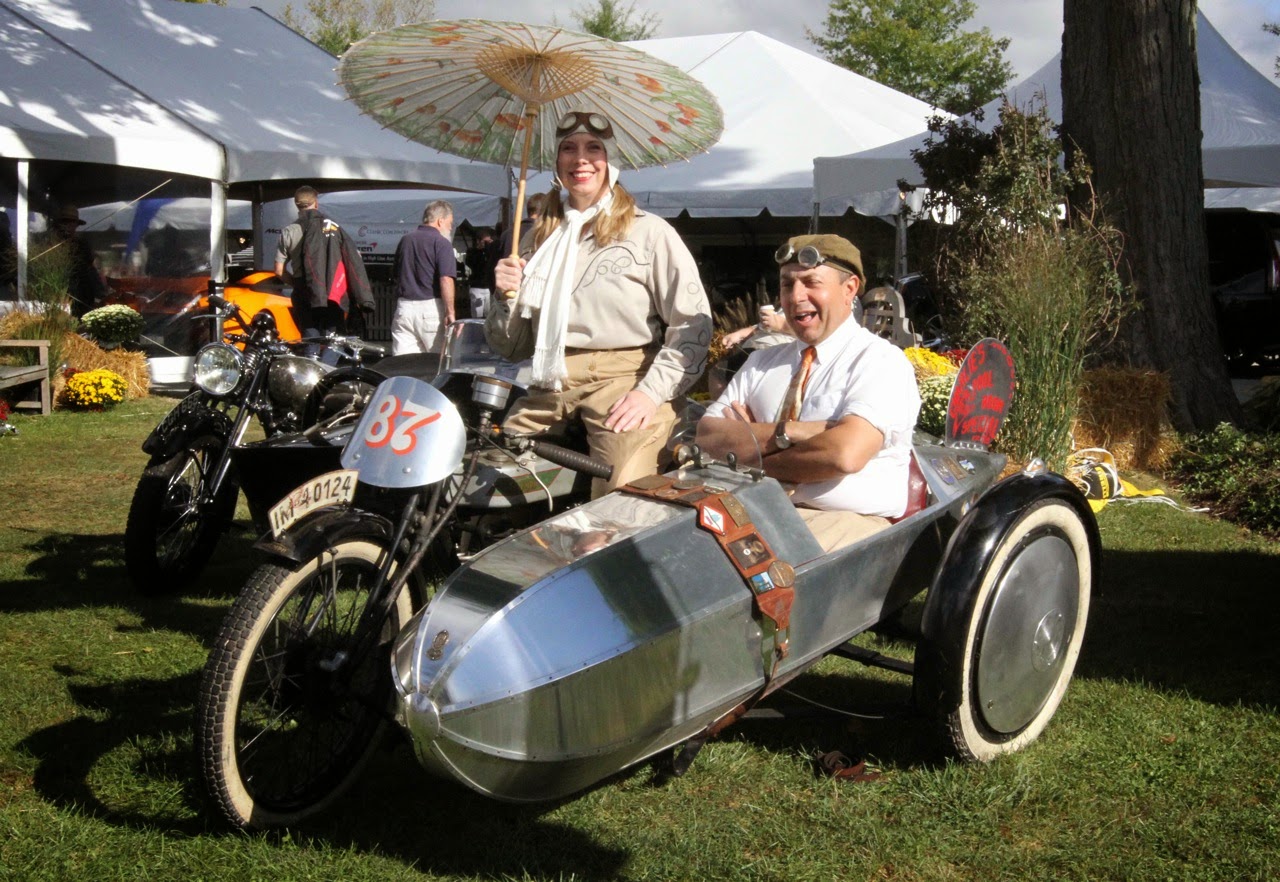 In addition to a show field full of interesting cars, Radnor Hunt also features motorcycles. To illustrate, we have John Illenye’s ‘28 TRW Triumph Nuremberg. Not only is the bike a rare model featuring a German-built single-cylinder engine, but also it sports a sidecar produced by the Hindenburg Metal Works.