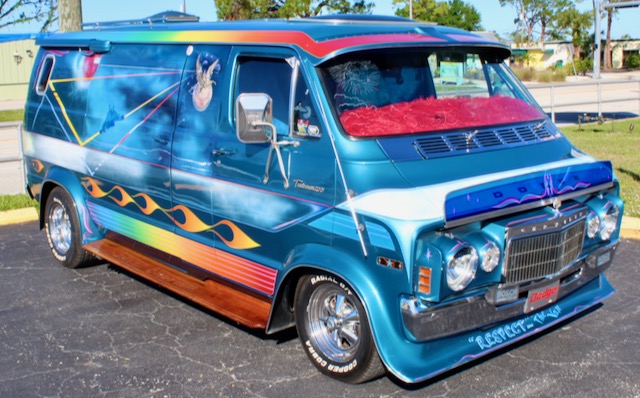 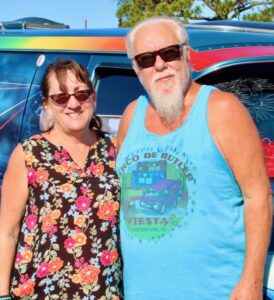 For as long as he can remember, Ohio native and Englewood, FL resident Junior Sammet, always had a fondness for the vanning lifestyle. In 1975, fate led Junior to a junkyard his Dad owned in Painesville, OH, right up to the wreck of a ‘75 Dodge Tradesman 200 that he bought for $900.

“It was my first hippie van,” Junior said. “It used to be a plumber’s van until it got caught in a snowy wreck, and rolled over but wasn’t too badly damaged.”

Every piece of metal, Junior said, was repaired on the van from the ground up, and even put on the front end of a 75’ Chrysler Cordoba, plush with a chrome wiper grille. 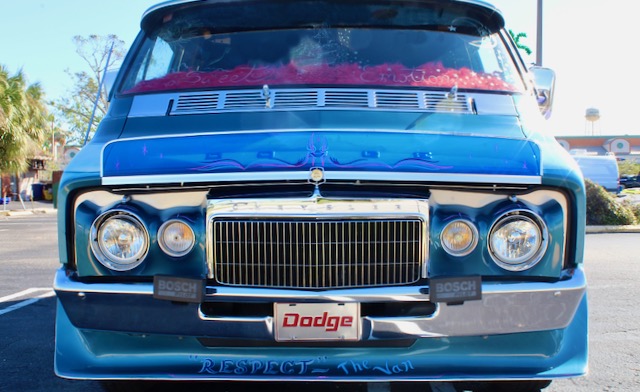 “It was straight from a ‘75 Cordoba,” Junior said. “While everybody had a regular grille, we put a Cordoba on the front. Something a little different.”

From re-haul to overhaul, the Tradesman was reborn into the Sweet Emotion – named after the Aerosmith song. It attended its first public car show at Lake County Fair Grounds in 1976 in Ohio. Additionally, a hydraulics system was installed in 1982.

“I used to bounce this van around a lot,” Junior said. “Just something a little different. I don’t bounce it as hard as I used to because back in the day, I broke the fender flares a few times, had to play with it a little because with age comes brains.”

With upgrades came a trip to Angola, IN that same year for the Sammet’s first Van Nationals show, the 10th Annual Van Nationals. He won a Third-Place trophy the first time out! 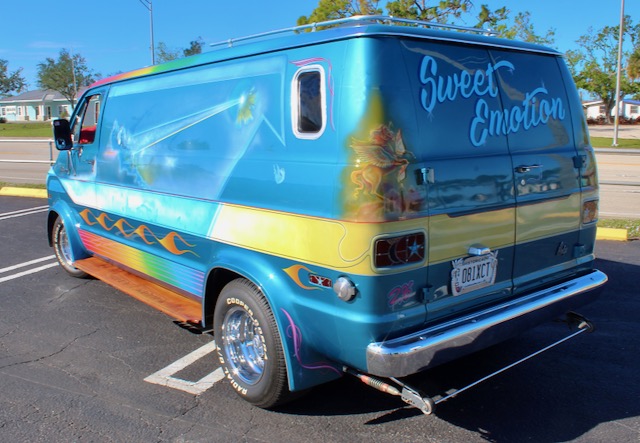 “Sweet Emotion has been a Van Nationals award winner ever since,” Junior said. “After a while, all the vanners we met and spent time with felt like family to us. The more we traveled and stayed at many vanner’s homes, and they also stayed at ours.”

For 40 years, Junior and his wife, Glenda, continued to embrace the vanning life with Sweet Emotion. Throughout its travels, it has not only been featured in major car magazines like Hemmings, it was also featured on The Exciting World of Speed & Beauty show in 1994.

Through its odyssey, Junior and Glenda even welcomed artists to contribute to their van’s canvas.

“The windshield is etched, all done by hand with a Dremel,” Junior said. “We had a friend from Ohio who was a tattoo artist. In two days, he did the etching, showing the star, the sun, the moon, and the big castle in the middle. He did a great job.” 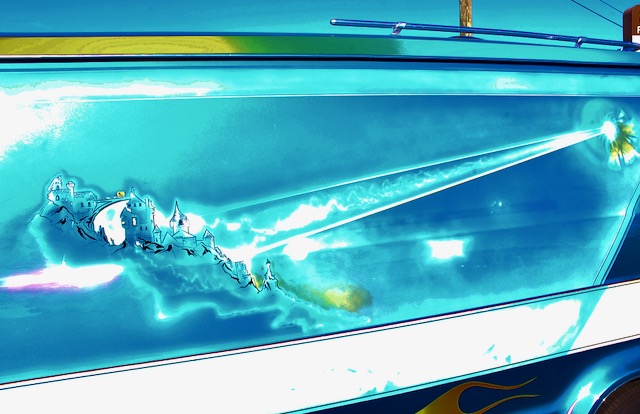 In the late 1970s, the Sammets’ van had a special makeover at Lake Erie College, where two students used it as an art project. To the right side of the van, a castle is painted which depicts, according to Junior, “The Secret Garden Society.”

“This was basically their art project,” Junior said. “We had all the stuff added on the project, the flames, the castle, the blending of colors down the sides, and on the roof. It has wooden running boards that we added Sweet Emotion. The lower areas on the sides where the flames are, were done in 1988 at a shop next door to our towing shop in Ohio.” 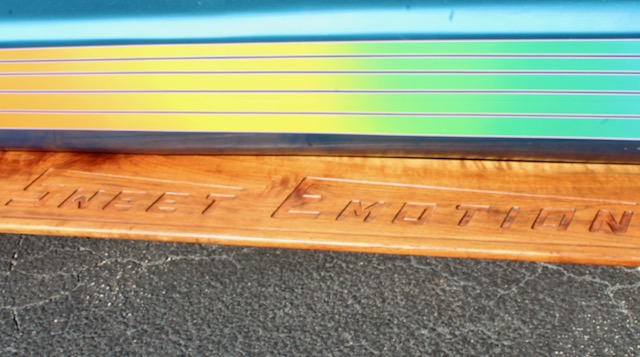 In 1989, the van and the Sammet family went their separate ways when Junior started a towing business. They sold it for $10,000.

“We were starting a towing business and needed a piece of land,” Junior said. “That was why we had to sell the van, which became our down payment.”

Two and a half years later, Sweet Emotion came home to the Sammets, after its previous owner put just 400 miles on it. The owner even added a couple of Unicorns at the rear after making repairs from accidental contact with a mailbox! 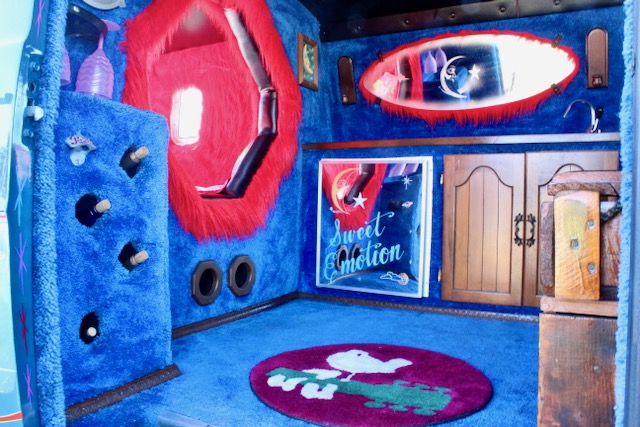 With the 1990s in full swing, Sweet Emotion not only appeared in magazines, but also on TV shows. It was featured in a 1994 episode of The Exciting World of Speed & Beauty, show #117.

Then came a Californian rock band called Fu Manchu, that was shooting cars for their 1998 song, King of The Road video. They wanted to film the van bouncing around thanks to its hydraulics. In 2001, Junior and Glenda traveled to a Fu Manchu concert in Ohio in their van to reunite with the band. 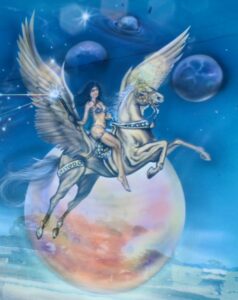 Every corner of Sweet Emotion is a mobile art museum. Among the pieces, a painting of a woman riding a Pegasus, depicting Glenda riding the winged stallion, side by Hotbrush FX Airtight Artistry 20 years ago.

On the nose, one might take the van for a special Chrysler Cordoba edition. Enter the interior from the rear, and there’s an eyeball-shaped mirror mounted above the sink. Opposite of “rich Corinthian leather”, red angel hair carpeting is decked out all throughout the master bedroom. For surround sound entertainment base speakers are mounted under the bed.

The taillights and marker lights go over and beyond what Chrysler rolled off the assembly line, showcasing both a star and a quarter moon made out of LED-stained glass, a popular piece of fine art in the 1970s. The wheelie bars were added for hydraulic-bouncing fun, and the Cragar mags are wrapped in 15-inch Firestone tires, fore and aft. 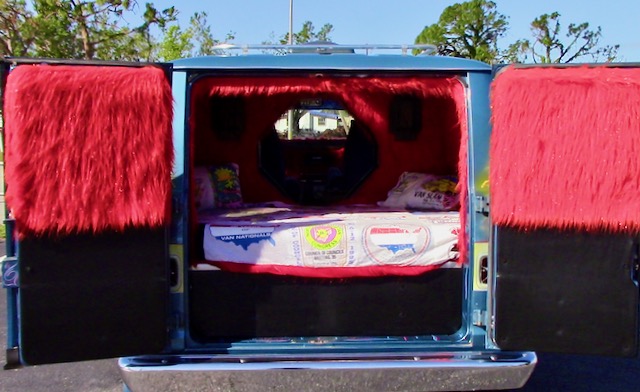 The heart of the Sammets’ custom van is a modified 318-inch Chrysler V8 with 340 heads, Edelbrock carburetor, a hot cam, and backed up by a Dodge Torqueflite transmission. There’s a sea of blue carpeting throughout the interior and the door jambs are tastefully pinstriped. There’s an overhead console with a CB radio and an eight-track tape player, accessories typically found on custom vans back in the day. Sweet Emotion brings back the good old days when vanners in custom rigs crisscrossed the country!