Skip to content
Stephen Cox talks with the short track racing legend who plans on hanging up
his helmet after 2014 season. 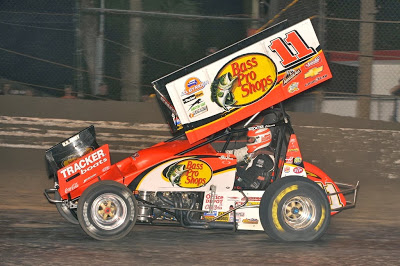 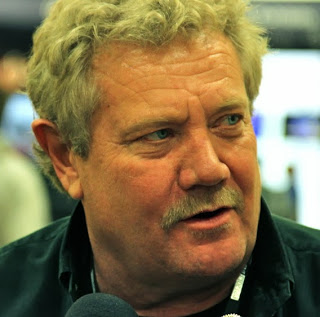 If you haven’t see the Beatles in concert, your opportunity is gone forever. If you missed Elvis when you had the chance, you never will. And in a few decades from now, the auto racing world will be sharply divided among two classes of people: those who remember watching Steve Kinser race, and those who don’t. Make sure you’re among the former, because those who had a chance to watch
him and didn’t will regret it.

20-time World of Outlaws sprint car champion Steve Kinser announced over the weekend that 2014 would be his final season of full-time competition in the series. To someone who is not a sprint car fan, it is nearly impossible to express just how dominant Kinser has been in the sport. With nearly 600 main event victories in World of Outlaw competition alone, Steve Kinser’s record is absolutely staggering.

I was fortunate to spend a few minutes with Kinser in Indianapolis on Friday at the PRI Show and wanted to pass along a few of his comments.

Why retire now, Steve? What has changed?

”When you get to the situation I’m in, you can kinda feel that it’s time. Your eyesight is not there, you don’t take care of yourself the way you should. Your body starts telling on you. I’ve had some pretty good licks the past couple of years. It hurt a lot a couple of times; a lot more than what it should. I just don’t heal as quick as I used to. It takes me a long time to get healed up. My body’s just been telling me that I’m at that point. I wish I could run ‘till I was 90,
but it’s not going to happen.” 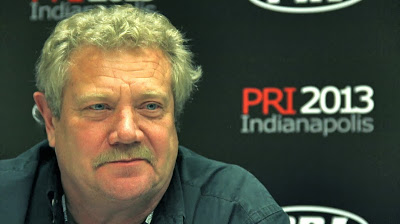 What advice do you have for kids getting into the sport today?

“You just gotta try to get the best equipment you can, that’s what I always tell them. There’s only one thing that makes these things run, and that’s all-American green (cash). Without that green stuff you’re not going to go very fast. Racing’s never been cheap and never will be.”

How competitive is the sport now compared to when you began?

“There’s been many times in the last few years that we’ve seen a guy win a race and he had to take a provisional just to get in. Everybody’s on a spec tire and everybody’s buying the same parts, basically. It’s as tough as it’s ever been and it’s not going to get any easier, I can tell you that. One year we won fifty-some races and, you know what I mean… those days are over.” 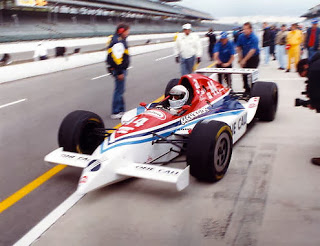 Thankfully, in a fit of good judgment, the management team of the World of Outlaws sprint car series talked Kinser out of immediate semi-retirement and a partial 2014 schedule. Instead, Kinser agreed to run one more full season of competition. So this is your last chance. It doesn’t matter if you’re a stock car fan or an Indycar addict. It makes no difference if you are a vintage racer or a motocross fan. Don’t be the guy who passed up tickets to Elvis’ last concert. This is The King’s last ride. Make sure you see it!

The rest of Stephen Cox’s interview can be seen here, http://www.youtube.com/watch?v=LYE7IVQnARk&feature=youtu.be