The birth and evolution of the Ford GT, GT40, Mark II & Mark IV – the iconic cars that won Le Mans four times in the 1960s – will be explored at SIMEONE MUSEUM: DEVELOPMENT OF THE FORD GT. 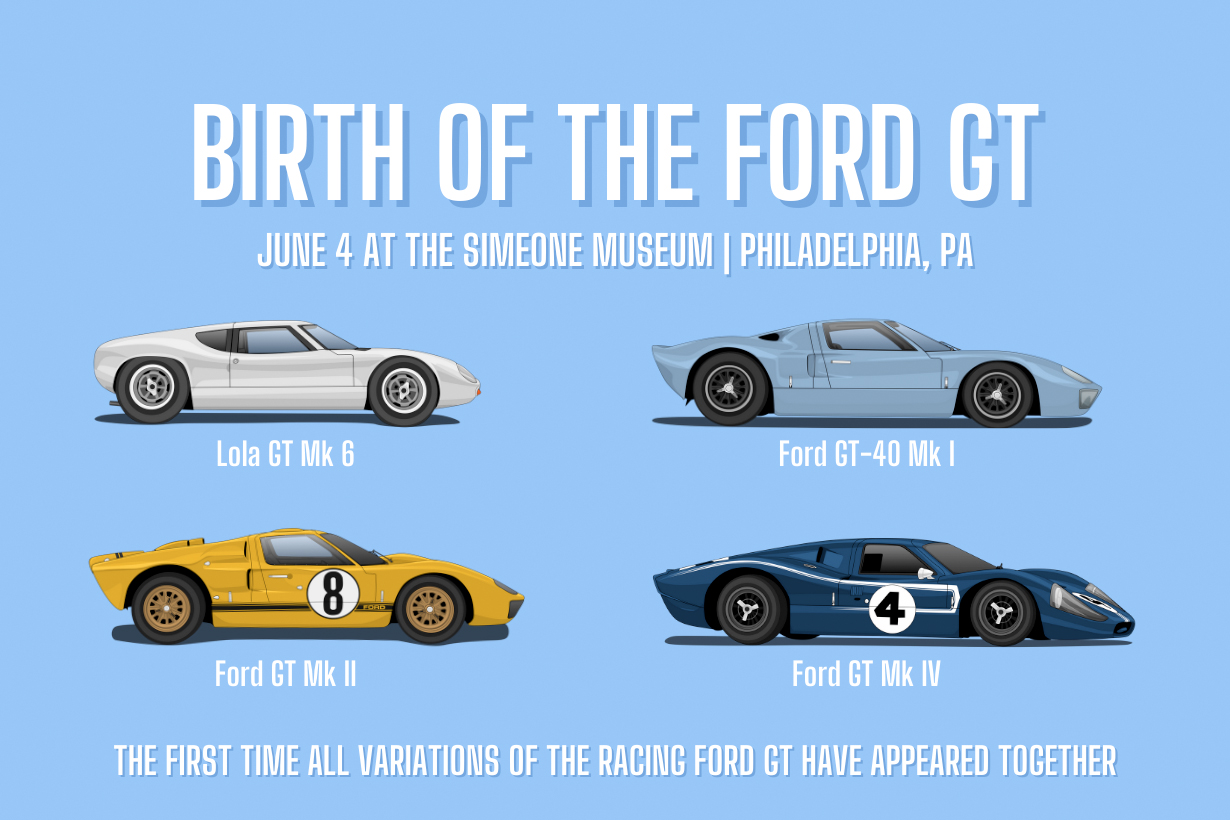 The “Birth and Evolution of the Ford GT” will have on display in Philadelphia on June 4th, for the very first time at the same place, all the racing variations of the Ford GT: Mk I, Mk II, and Mk IV, as well as a Lola GT Mk 6, a car many believe was an inspiration for the Ford GT.

Three noted authorities will discuss the origins and development of the Ford GT: Allen Grant, former driver for Shelby American and owner of the Lola GT; Mike Teske, author of Ford Racing Century and builder of the Kar-Kraft continuation Mk IVs; and Janos Wimpffen, the author of the most comprehensive history of endurance racing, Time and Two Seats. Historian/photographer Harry Hurst will moderate. After the discussion, several cars in the display will be taken out for demonstration runs on the Museum’s back lot. The event begins at noon and is included with regular museum admission. In addition to the cars above, the display will also include a 2005 and 2019 Ford GT, both cars designed and developed with the original cars as inspiration.  The cars will remain on display at the museum until June 12th. 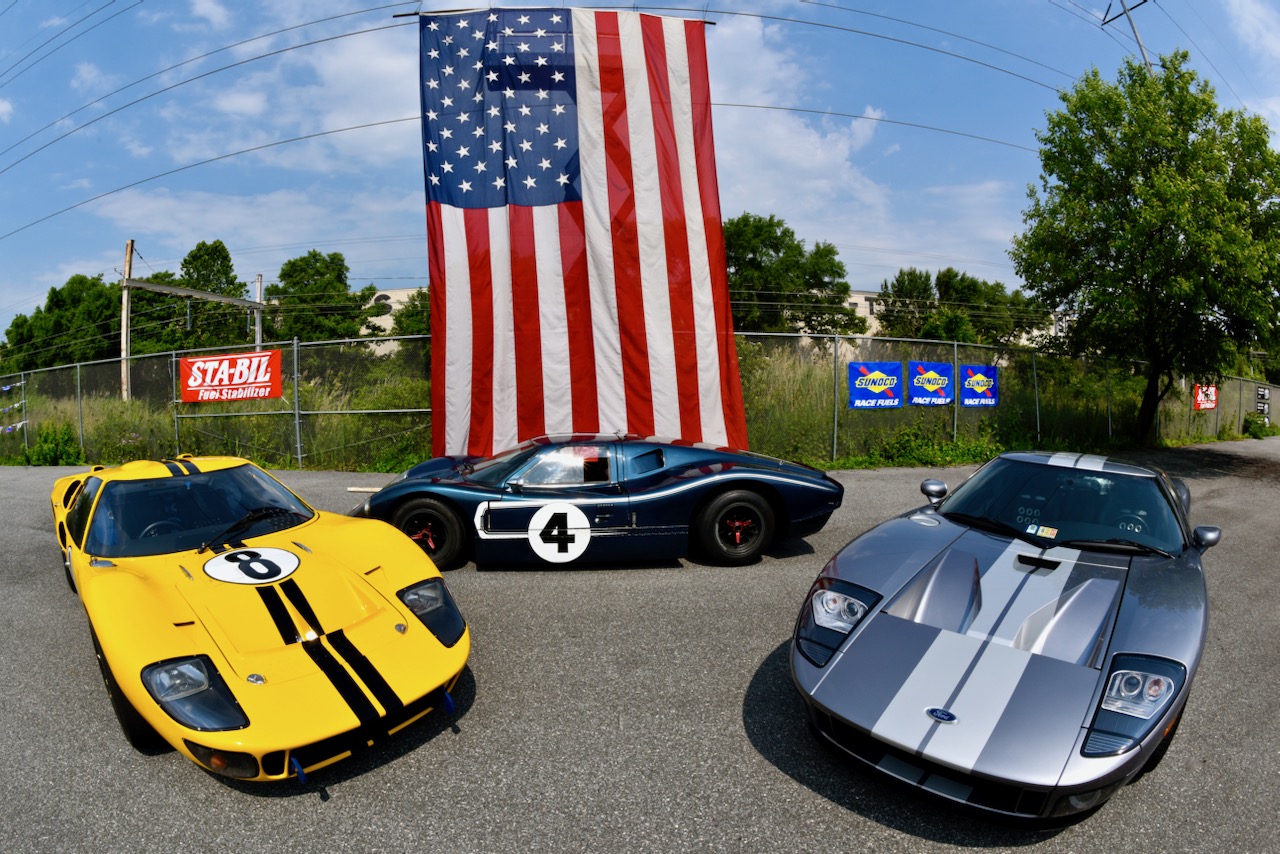 A second event is scheduled for June 11th at 11 AM featuring Camilo Pardo, the Ford designer who penned the 2005 Ford GT. The very car he used as inspiration, Ford GT-40 Mk I chassis #1030, will be on display for Pardo to use in his discussion. The Ford GT-40 Mk I (chassis #1030) that will be displayed is owned by Benjamin Levy. The Lola GT Mk 6 (#LGT.P) is owned by Allen Grant. The Ford GT Mk II (#XGT1) and Mk IV (#J-8) are both part of the permanent collection at the Simeone Museum. A street model of the Ford GT-40, the Mk III, only seven were built and was not intended for racing. During the discussion, participants will use the cars on display to illustrate design details that are important in the evolution of the car. Video will be projected on the large screen above the stage so attendees can see it close up. The event is scheduled to be streamed live on Facebook. 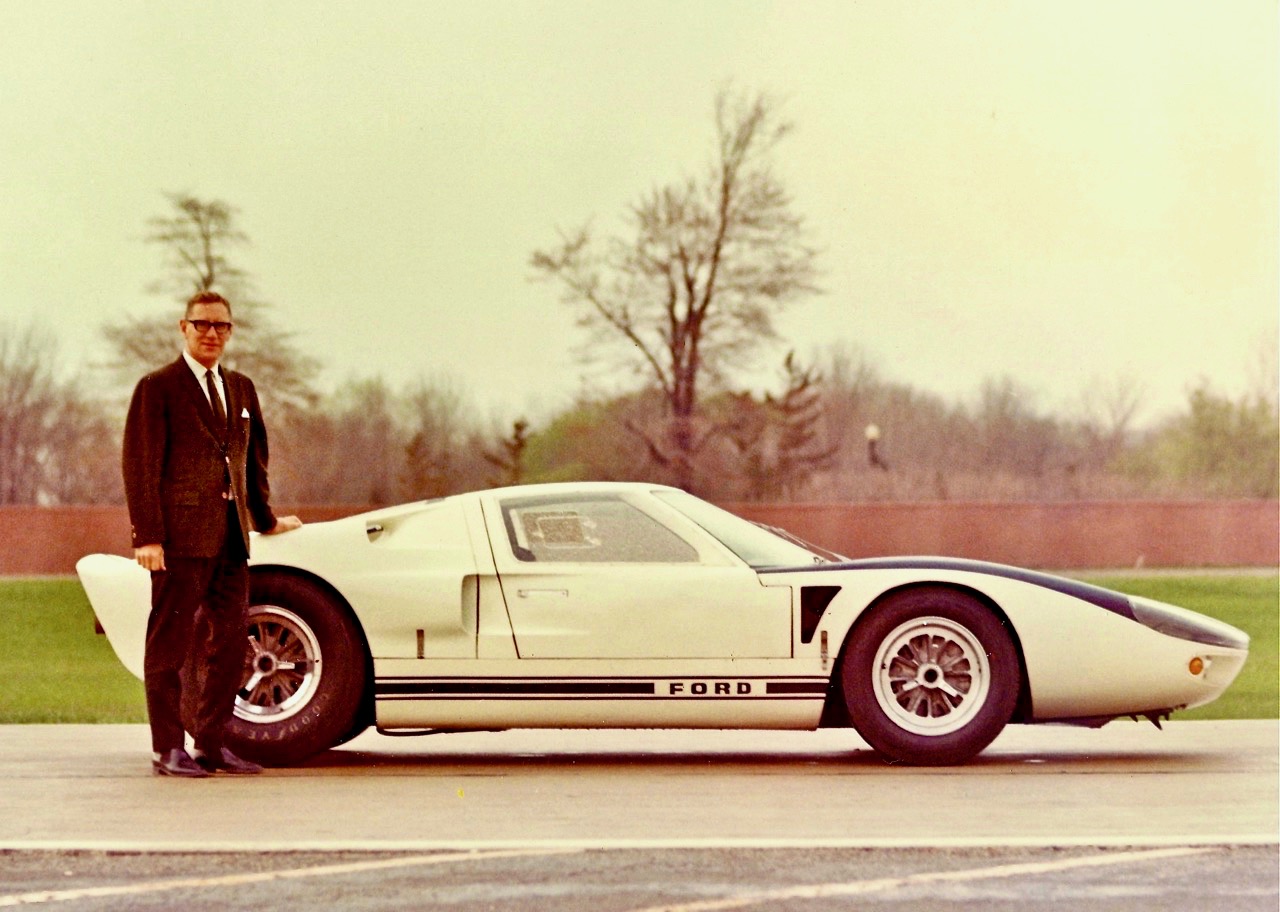 The Ford GT has its origins in the early 1960s when the Ford Motor Company was looking to improve its stodgy image with Baby Boomers who were beginning to enter the car market. Executives, led by Lee Iacocca, determined that the growing sport of auto racing would be a good way to project a dynamic image. Rebuffed after trying to buy Italian sports car manufacturer Ferrari, Henry Ford II gave the order for Ford to build a car that would win the torturous Le Mans 24-hour endurance race. To expedite the design of the car, Ford put Roy Lunn, above, in charge of the program and he contracted with Lola, whose owner Eric Broadley had built a compact sports coupe with a mid-mounted small-block Ford V-8.  While this car, the Lola GT Mk 6, was not the first Ford GT, it was, along with the 1962 Mustang I, a design inspiration for the first Mk I built in 1964. This car came to be called the Ford GT-40 since its roofline was only 40 inches above the ground.

For more information about SIMEONE MUSEUM: DEVELOPMENT OF THE FORD GT, other displays, hours of operation, and directions, please call 215-365-7233 or visit https://www.simeonemuseum.org/