The Matunes help us celebrate the silver anniversary of what has become THE ‘show of shows’ on the international Concours calendar, and honor Roger Penske. 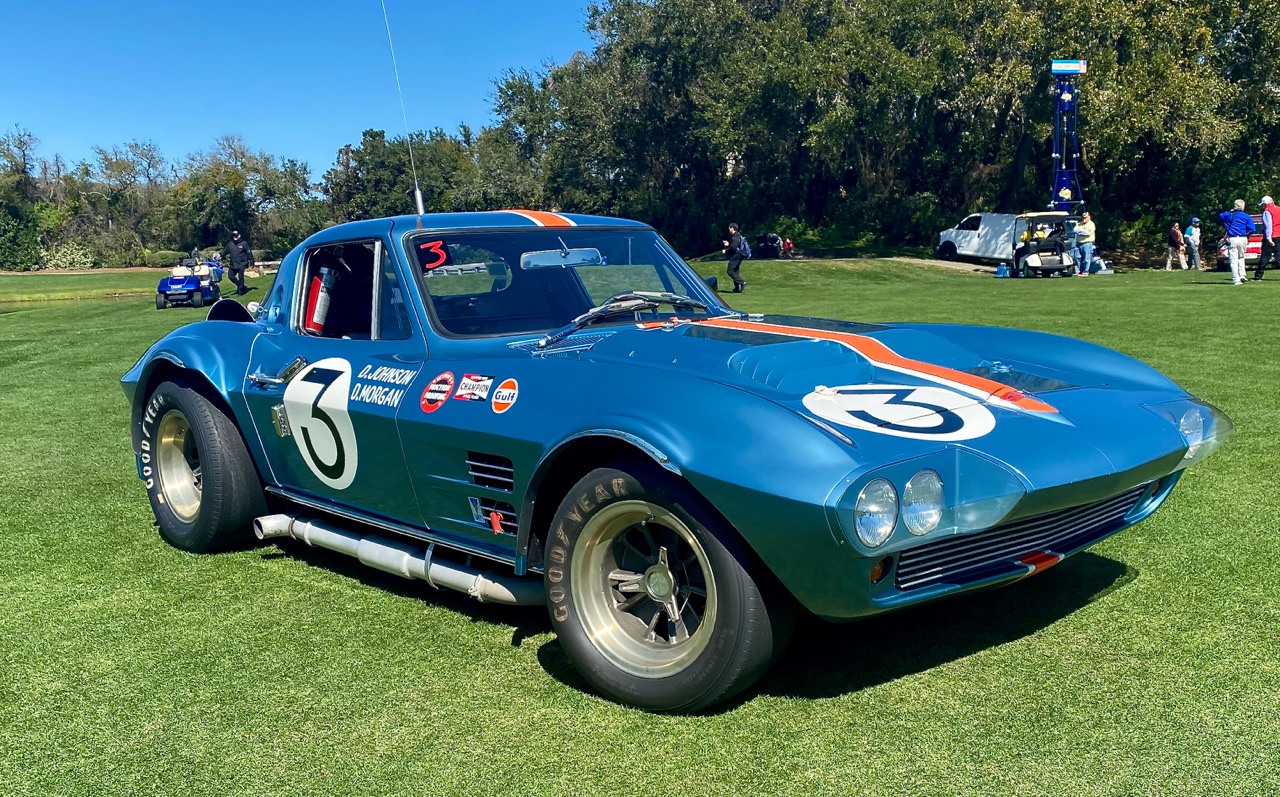 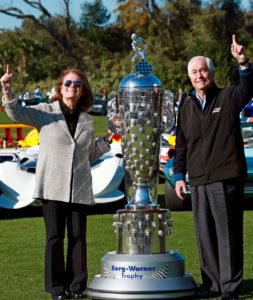 Few cars invoke the feeling of the Grand Sport Corvette, the only ’63 Corvette coupe (five or six built depending on who you ask) not to have a split backlight! There is just something about its brutal, purposeful lines and the untapped potential it represented that captures the imagination. Not surprisingly, Roger Penske fit into its history having piloted examples of the GS in venues such as Nassau and gave Chevrolet its first Grand Sport win. SILVER SALUTE: AMELIA ISLAND CONCOURS was the perfect place to showcase this iconic factory-built racecar. Here he and wife, Kathy, stand in front of a field of cars associated with him. Between them is the Borg Warner trophy that Roger has won eighteen times (so far!) as a team owner.

For their Silver Anniversary, the Concours honored business and motorsports’ icon Roger Penske. There is virtually no element of the sport he hasn’t impacted, from driving through team management to track ownership and event/series promotion. And, this includes his recent acquisition of the Indianapolis Motor Speedway and the Indy 500. His influence can be felt worldwide. Throughout the weekend  he was always gracious and always ready to entertain with an anecdote. 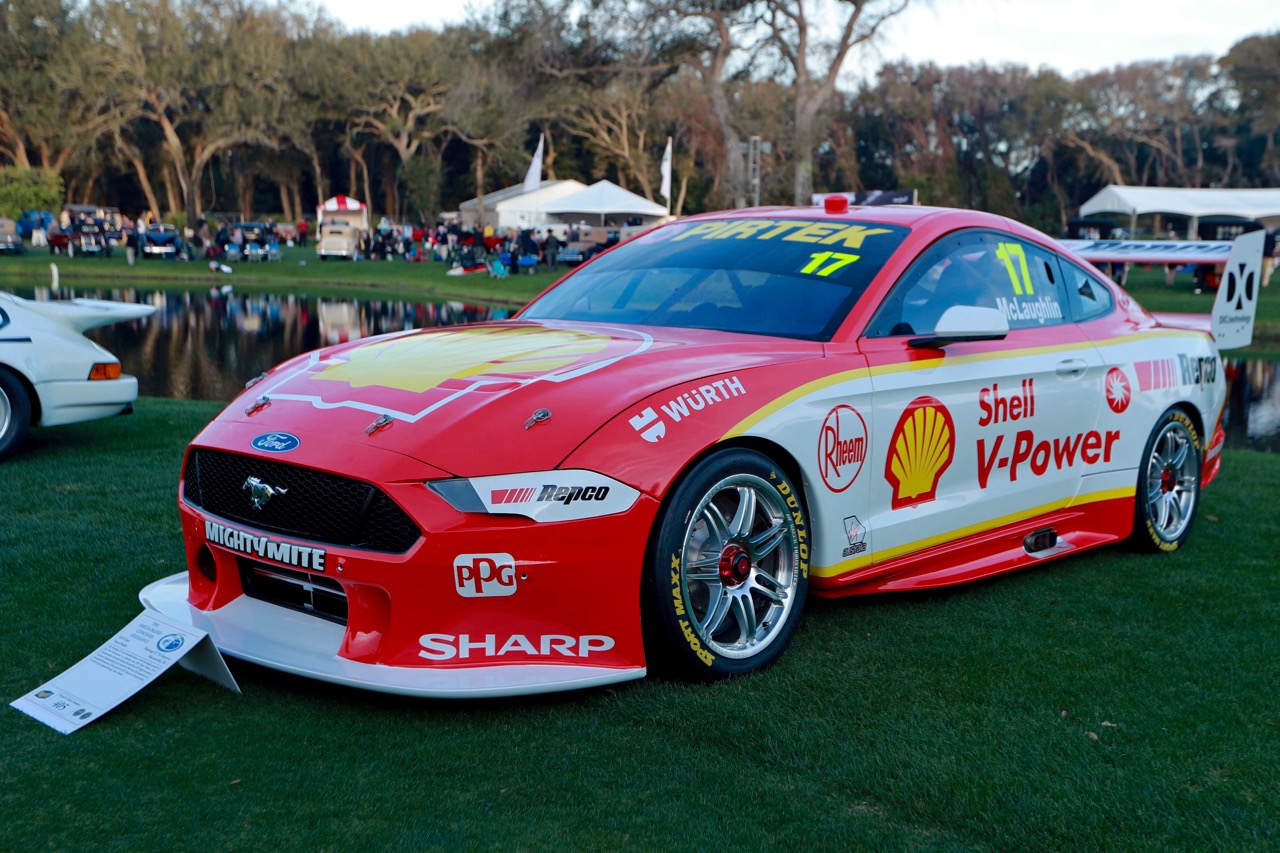 The breadth of the Penske organization is exemplified by this car, a Team Penske winner from Down Under. Piloted by Alexandre Premat and Scott McLaughlin, It won the 2019 Bathhurst 1000. A prime example of Australian Supercar racing, it’s Mustang bodyshell covers a racing chassis powered by a thundering Ford V8. 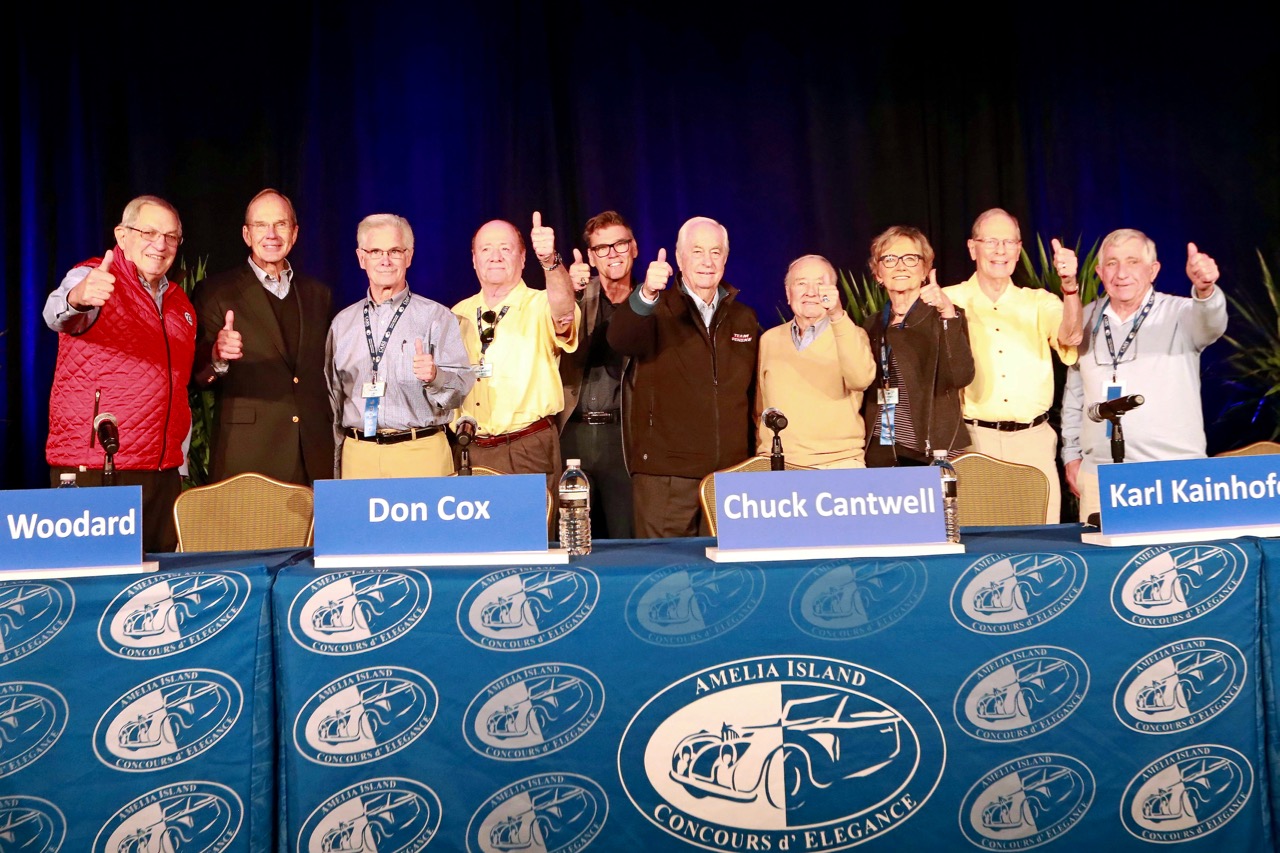 To help honor Roger, a group of famous names gathered to relive the origins of the Penske racing organization when his mantra “Effort Equals Results” became the Penske Way. At a pair of seminars, audiences were regaled by stories from those who lived it. Penske talked about the parts others played in his success and the value of “Human Capital”. The mutual respect held by all involved was palpable. At the conclusion of the ‘The Early Years’ seminar, the panel posed for a group shot including: Bill Warner (Amelia Island Founder & Chairman), Walt Czarnecki, Don Cox, Woody Woodard, Ray Evernham (Moderator), Roger Penske, Karl Kainhofer, Judy Stropus, Chuck Cantwell and Jay Signore. 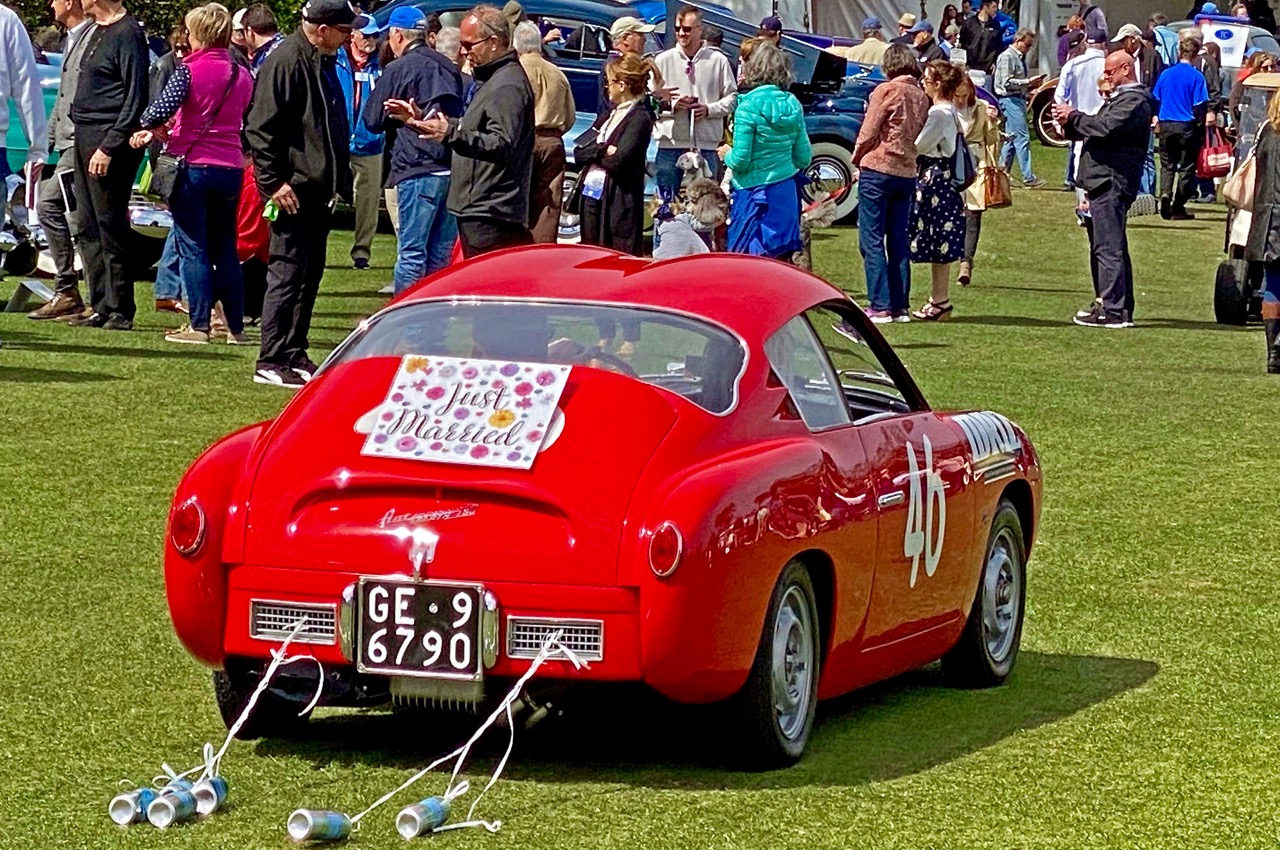 The unusual is the usual at Amelia Island! In addition to the normal Concours fare, they can always be counted on to push the envelope and include something truly unique. An example is this year’s That’s Cute class that showcased various diminutive automotive creations. Joy & John Kristoff would score a double win, getting married on the beach on Friday and taking Best in Class on Sunday with their ‘56 Fiat-Abarth 750 GT MM. Our congratulations to them on both accomplishments at SILVER SALUTE: AMELIA ISLAND CONCOURS. 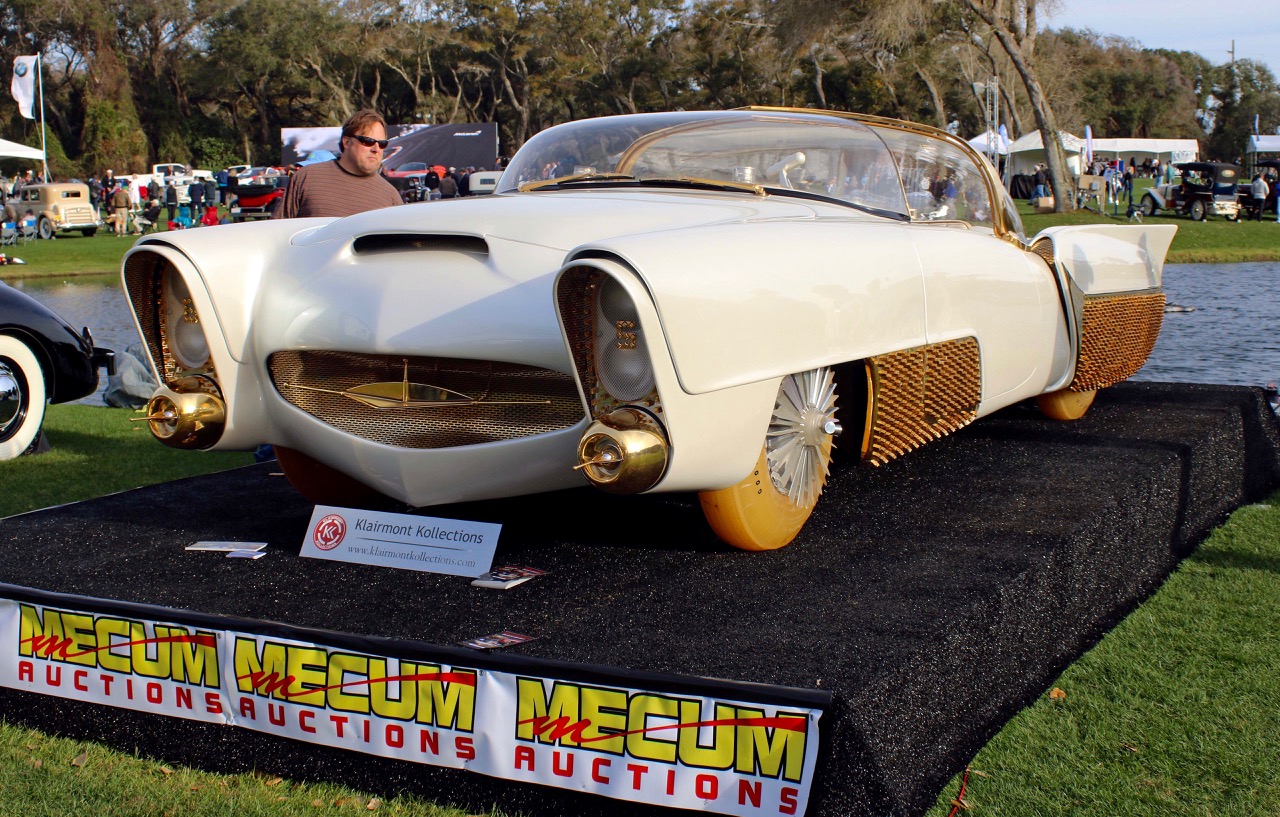 Talking about unusual Concours cars, how’s this for an example? The Klairmont Kollection showed George Barris’ creation Golden Sahara. Built from a wrecked Lincoln Capri for owner Jim Skonzakes, it incorporated outrageous styling and groundbreaking electronics to create a show-stopping marvel that delighted audiences through two iterations. Those tires were custom made by Goodyear and are translucent. Fitted with internal lights, the tires are but one element of the car, which as a whole truly overwhelms the senses. 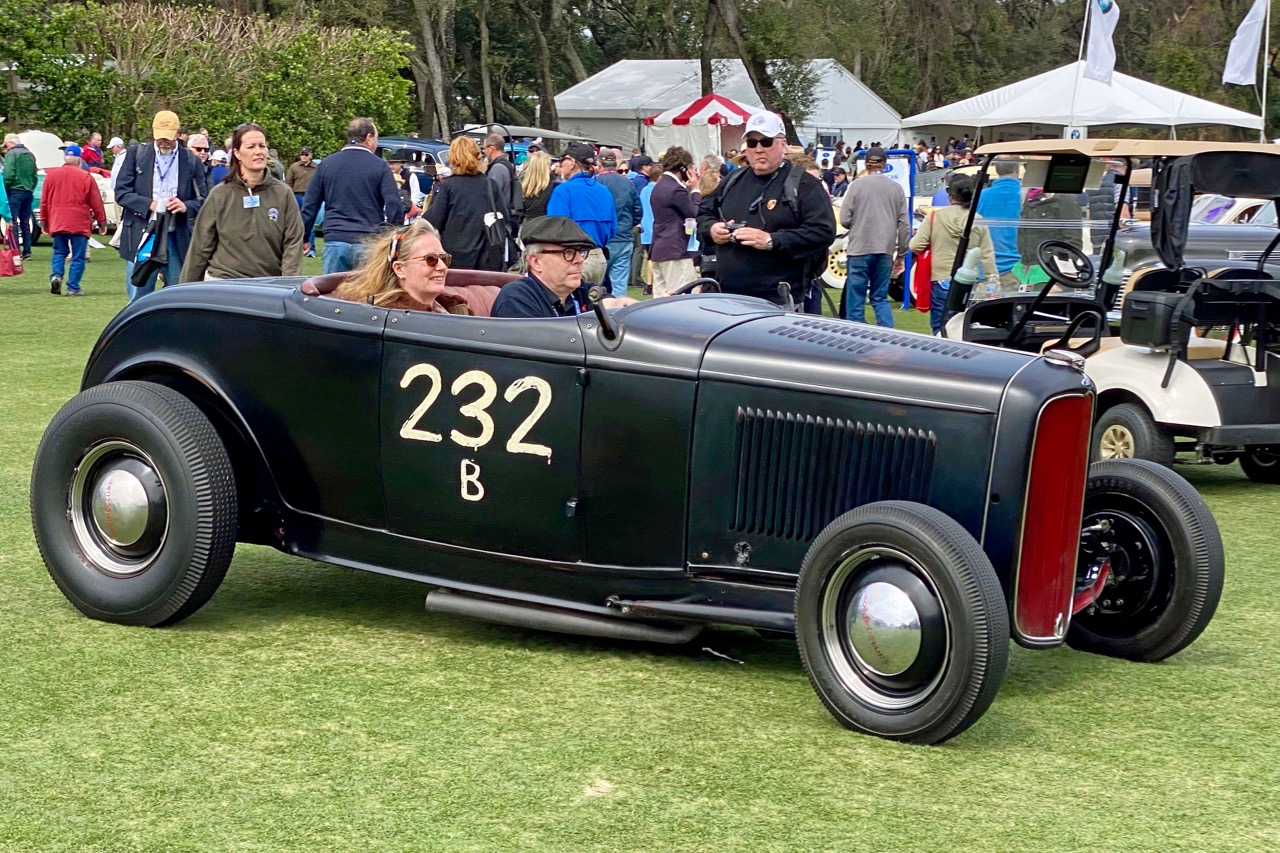 It is good to see the American Hot Rod receive the attention it deserves from the collector world. As distinctive as many coachbuilt cars and packing all the performance associated with more famous racing marques, hot rods represent an American twist on the individually styled automobile. This year Amelia Island showcased the work of New York builders, The Rolling Bones. Purveyors of the traditional hot rod, they have earned a place of honorin the hot rod world. Their cars are shown, driven and raced worldwide. With over 80 Bonneville passes, competition at multiple venues and thousands of miles of cross-country travel, Jacqueline & Jon Suckling exemplify Rolling Bones’ hot rod owners. They went on to win Best in Class. 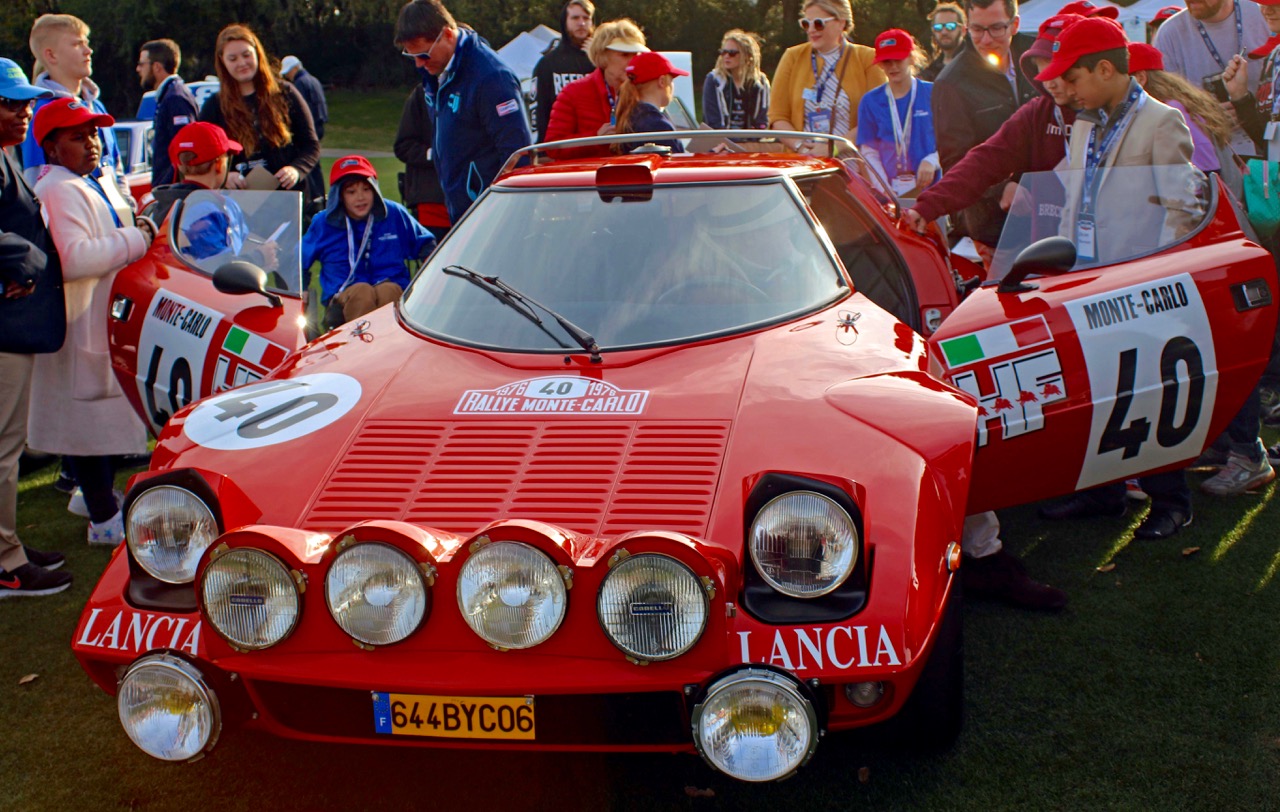 The Hagerty Youth Judges are a mainstay of the Concours movement, helping to bring more young people into the hobby/business. Here they surround Suzanne & John Campion’s ‘75 Lancia Group 4 Stratos. Each judge was allowed to sit in the car, provided they grunted as they got out as the older gentleman had done when he tried to exit the low, cramped cockpit. Judges awarded the Stratos one of their Hagerty Youth Awards. 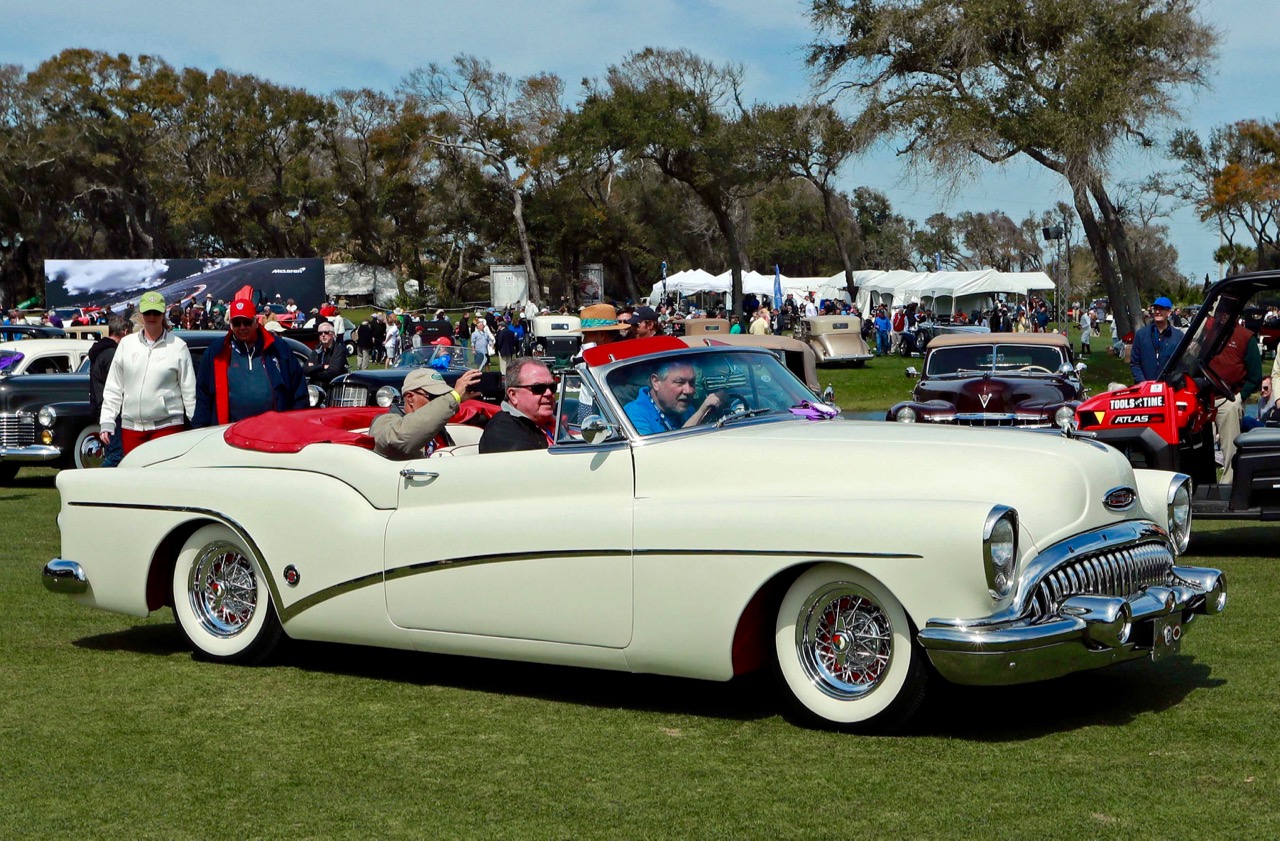 Harley Earl is one of only a very few legends who has emerged from corporate behemoth General Motors. Normally GM gobbled up personalities, but somehow Harley rose above it all and left his mark on GM and the industry. Here is but one of his lasting production legacies, the ‘53 Buick Skylark of Angie & Jeff Brashares. This stunning car is an older restoration that has been freshened. They left the SILVER SALUTE: AMELIA ISLAND CONCOURS with the David E. Davis, Jr. Trophy for The Most Outstanding Post-War American Car. 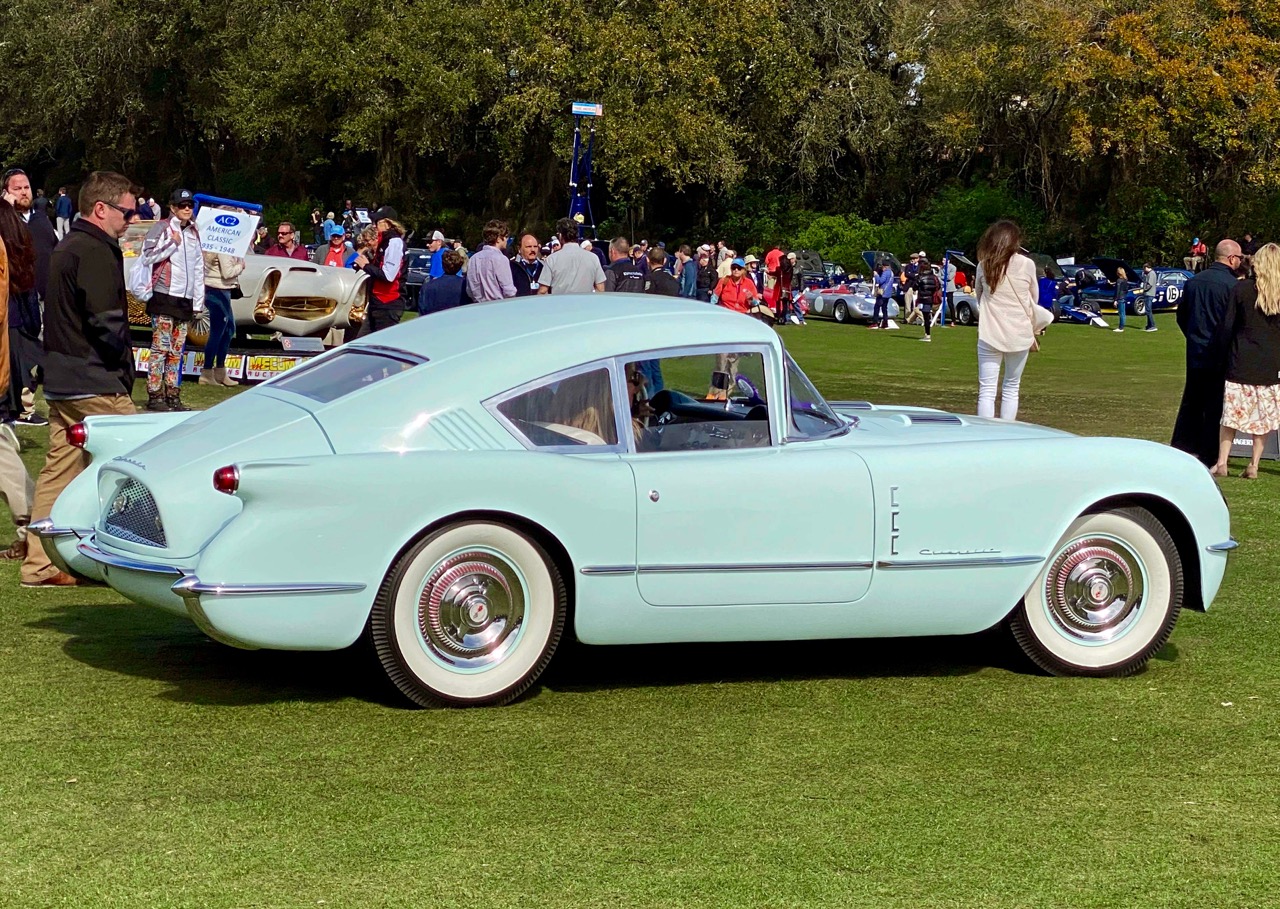 Harley Earl’s touch can be seen in a number of prototypes such as the ‘54 Chevrolet Corvair, a fastback version of the original Corvette. It wowed show-goers at the GM Motorama who likely weren’t aware, that while it wouldn’t see production, the Corvair did portend several styling touches that reached future Corvettes. Ken Lingenfelter owns this reproduction. 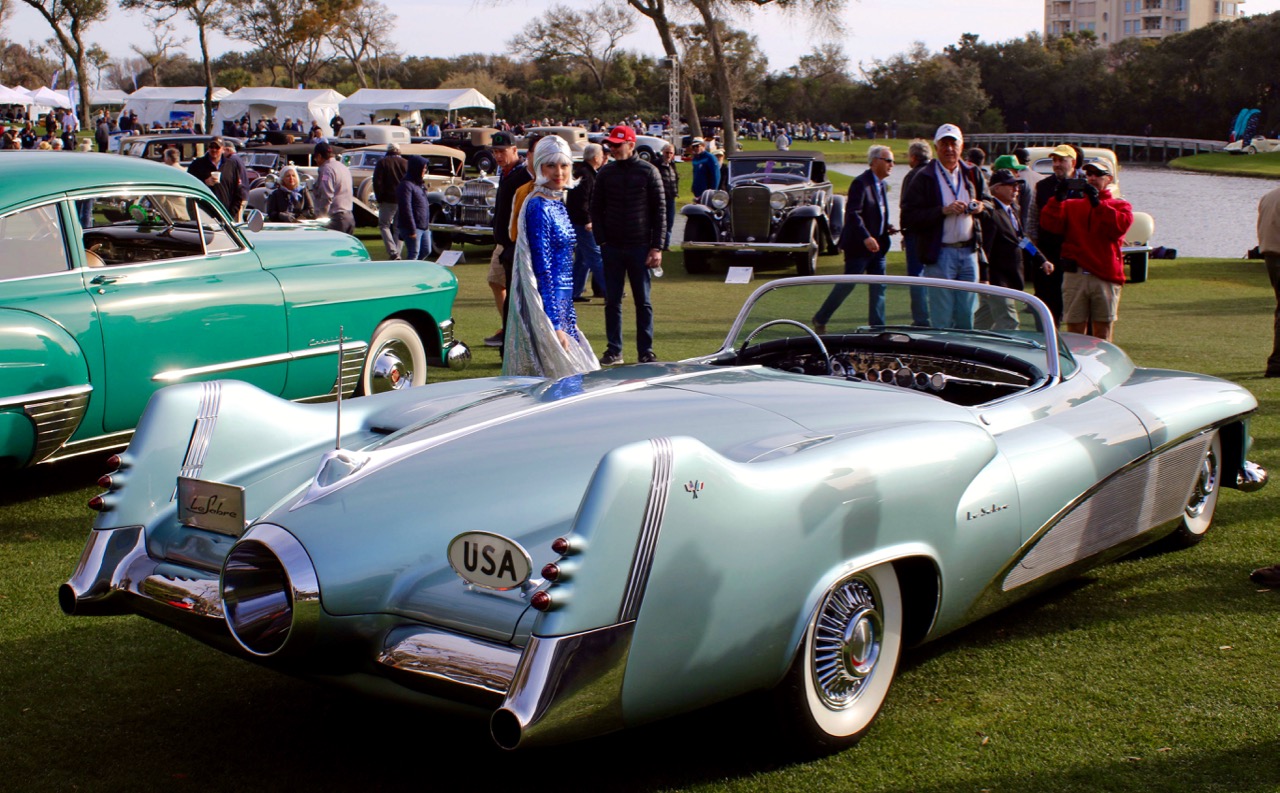 One has to imagine the effect Earl’s LeSabre had on the automotive consumer of the time. GM’s first dream car of the Post-War era, it was heavily influenced by the new for the time jet aircraft technology. It exemplified the optimism and dreams of the period. Every styling element and feature was like nothing that had come before. Under the hood a dual fueled, supercharged, aluminum V8 assured that its performance matched the looks. The model in the background was one of several that helped take us back in time to when these cars roamed the show floors. Thanks to the General Motors Heritage Collection for showing the car. 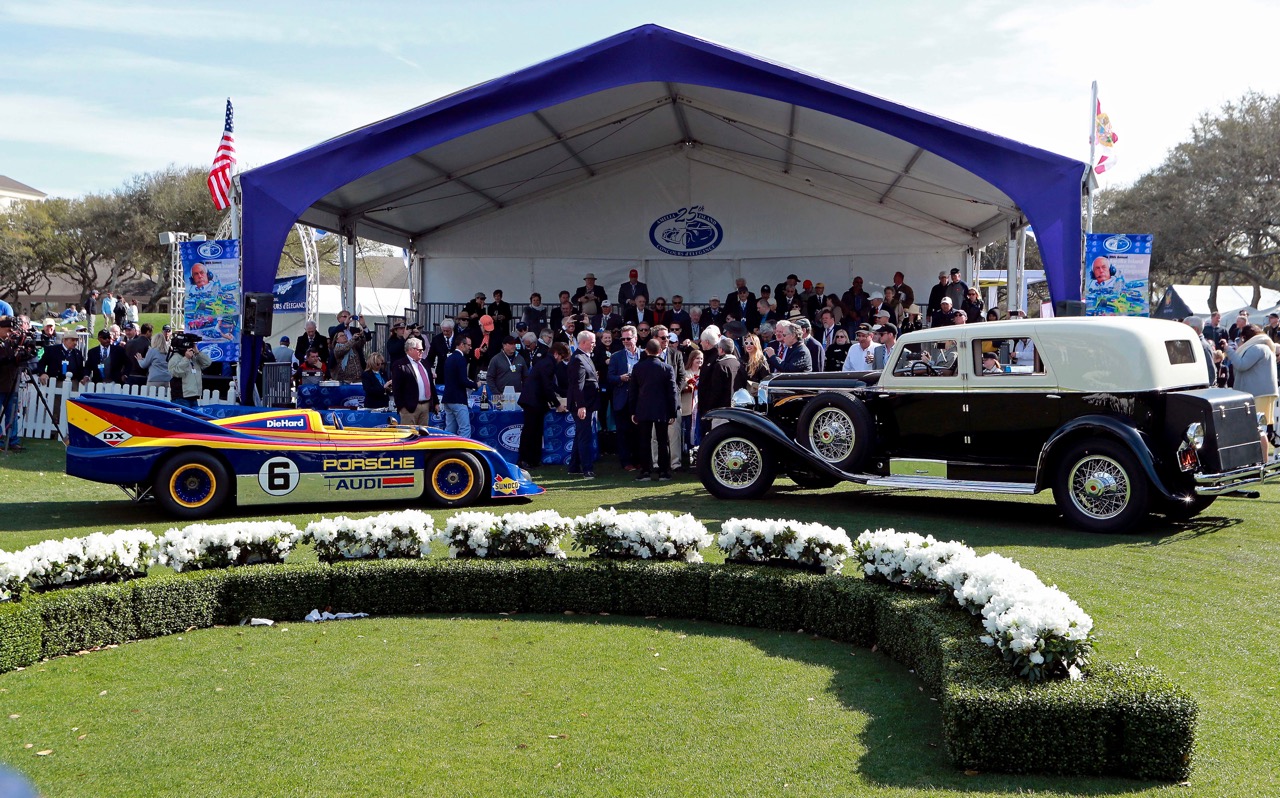 It seems incredulous, but somehow a field of over 300 outstanding cars can be boiled down to a pair of winners, but somehow the judges are able to do it. Taking the top honors this year were Rob Kauffman’s Porsche 917/30 Can-Am Spyder, Best in Show, Concours de Sport and The Lehrman Collection’s ‘29 Duesenberg J-218 Town Limousine, Best in Show, Concours d’Elegance. Both awards presented at the SILVER SALUTE: AMELIA ISLAND CONCOURS by Concours’ host: The Ritz-Carlton, Amelia Island. 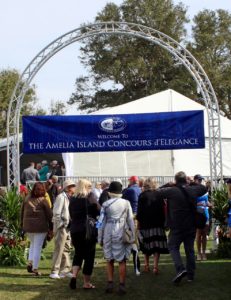 Our thanks to Bill Warner and Chris Brewer for their help with credentials and to all involved in the Amelia Island Concours d’Elegance for another outstanding event. We also appreciated Cadillac’s sponsorship of the Media Center. Having an oasis during the weekend was very nice. Thanks also to Julie & David Jones at the Blue Heron Inn in Fernandina Beach for their warm hospitality.