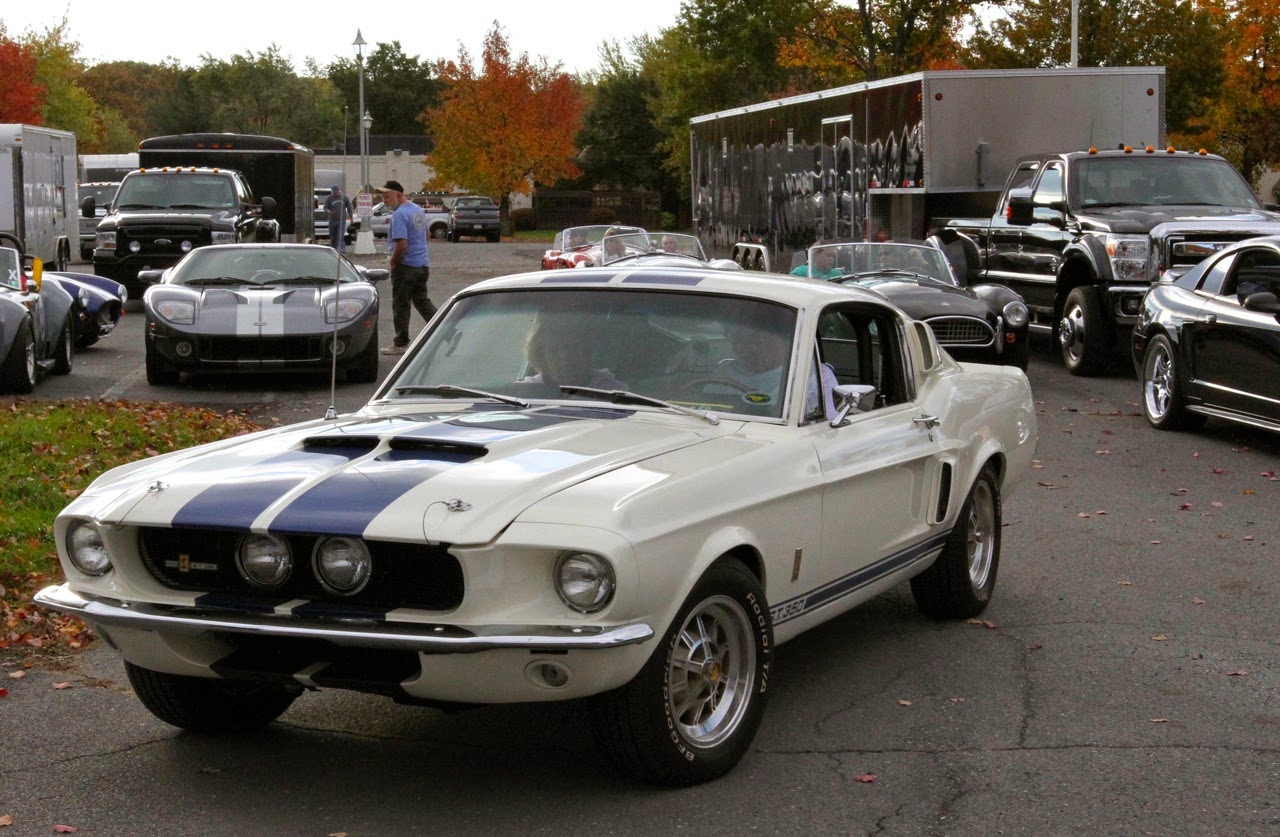 After my article “Mustang A Born Winner” appeared in Vintage Racecar, October, Dan Reiter of the Lehigh Valley Region of SAAC (Shelby American Automobile Club) invited Maureen and I to the NE Regional Meet in Gettysburg, PA, where I spoke on early Mustang racing. The event was three days of all things Shelby and Ford. Here Bonnie and Glenn Hill prepare to leave on Saturday’s Tour across south-central Pennsylvania.

Shot of Shelbys and Fords, left, as far as the eye can see gets the juices flowing. Mid-October brought blazing color all along the tour route that stretched about 70 miles over some of those tight, twisty back roads that we all “need” for a Fall driving experience. 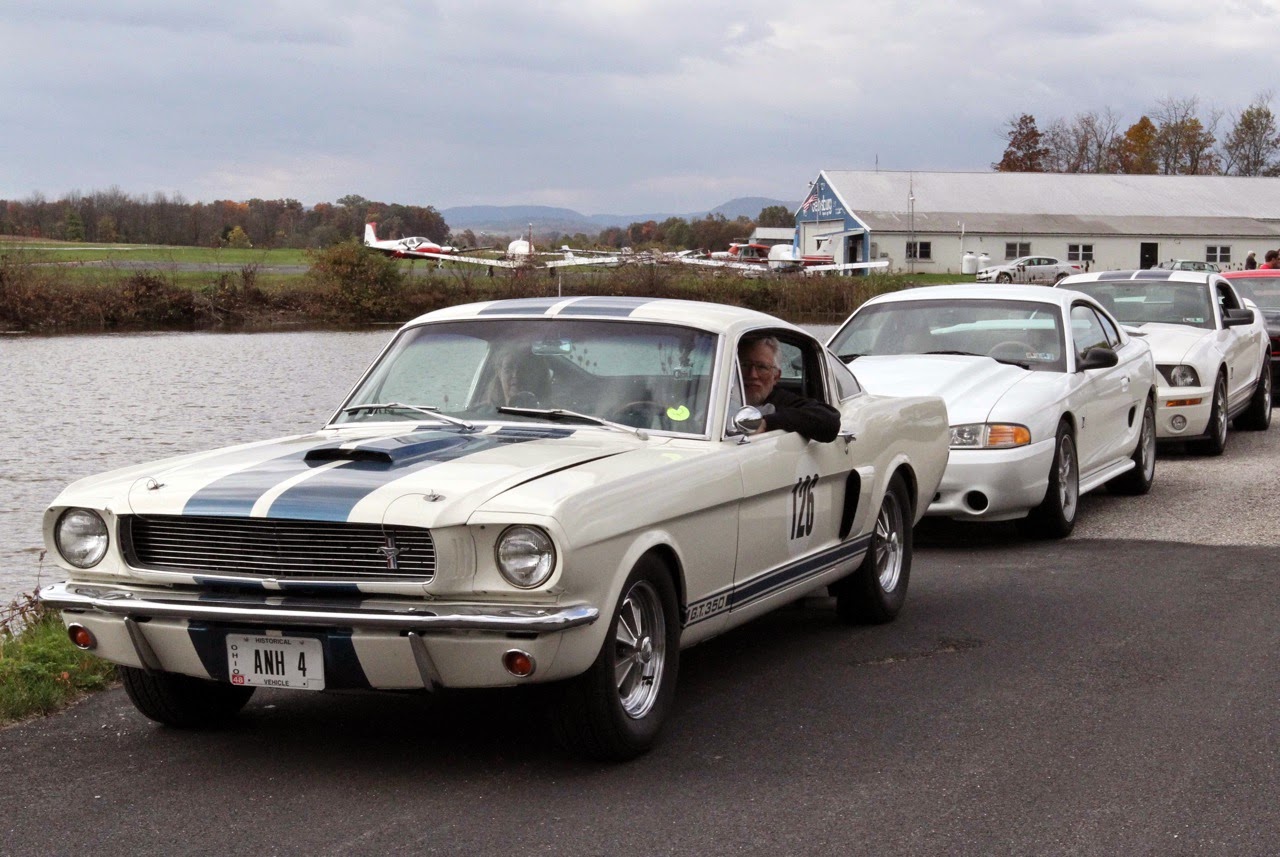 Areas were set up along the route to make sure the tour was hanging together and no one lost their way. The first was at the Gettysburg Regional Airport. Leading this column of eye-candy is Alan Hanna‘s ‘66 GT350. Hanna drove from Toledo, OH for a “play date” with the Shelby faithful. 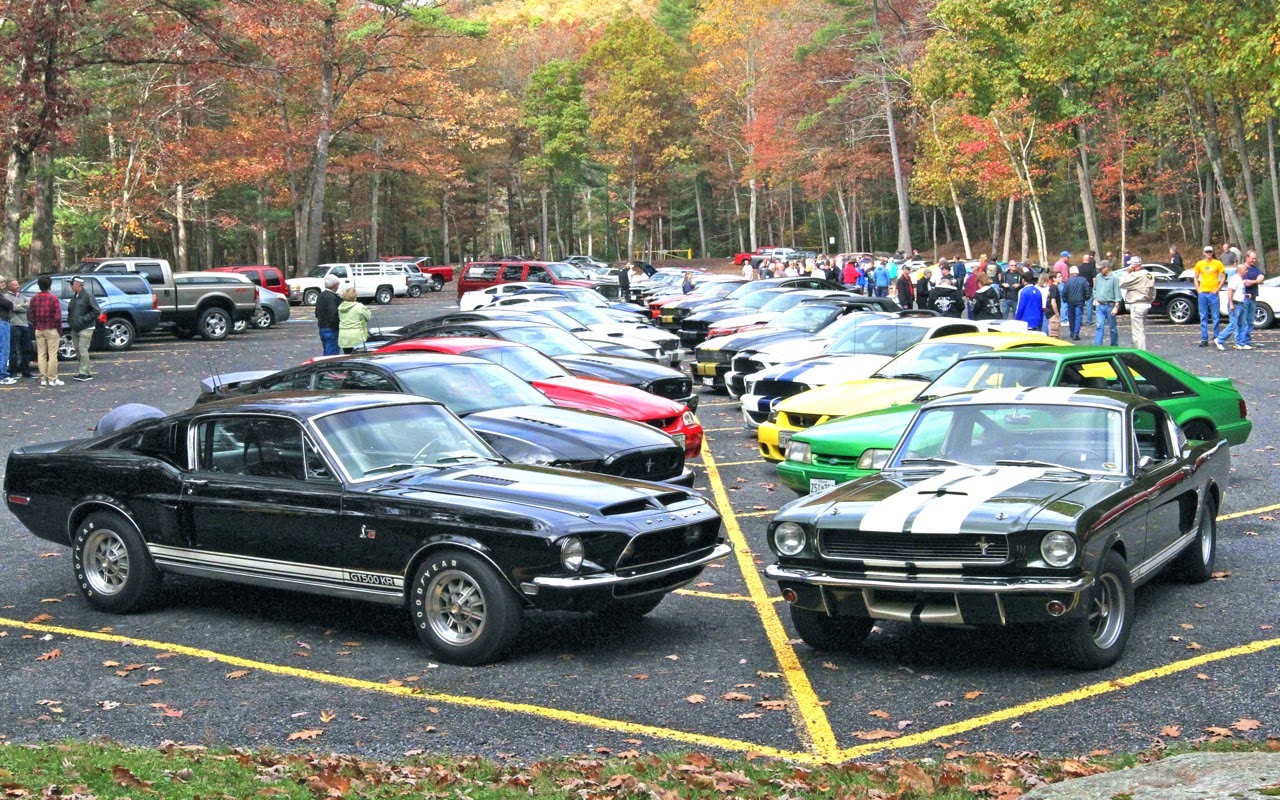 The second area was at Caledonia State Park. Gathered down the center of the parking lot, the approximately 65 tour participants represented every conceivable Shelby product, along with significant Ford performance cars. Heading the line are Tim Brillhart’s ‘68 GT500KR and Brant Halterman’s ‘66 GT350. Brillhart was this year’s Tourmaster and deserves kudos for his efforts.

For any car guy touring this part of Pennsylvania, a stop at the Eastern Museum of Motor Racing in York Springs is mandatory. The museum has a heavy circle track and drag racing orientation and is chock full of cars and memorabilia you won’t see anywhere else. In addition, they hold a significant collection of Chris Economaki’s personal archives, perfect for researchers. Parked in front of the museum are the Ford GTs of Keith Anderson and Cindy & Tom Paxson, both Tour participants. 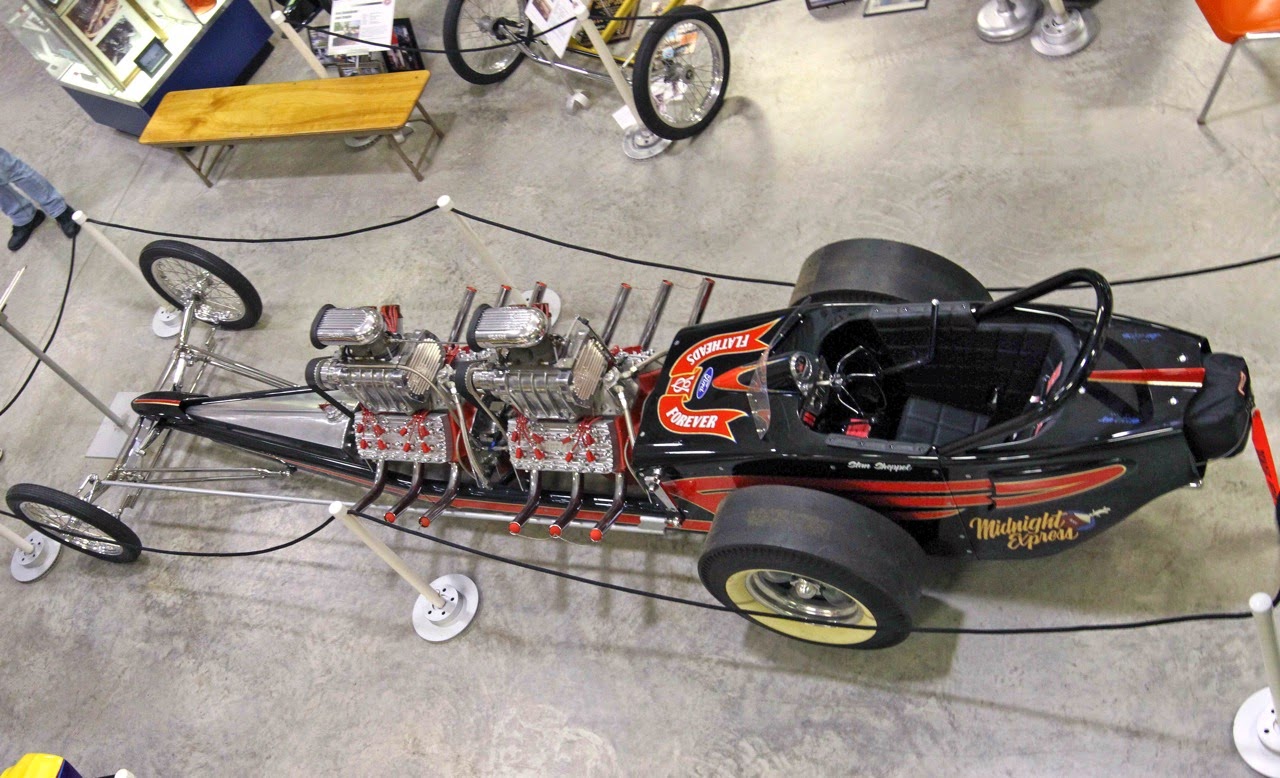 We have talked about EMMR before, but as they rotate exhibits, there is usually something new to see each time you visit. Here is Stanley Shoppel’s dual Flathead powered vintage dragster.  The engines are dual ignited, blown and supercharged

To round out the Tour, the group made a late afternoon stop for a barbecue lunch at Performance Motors of Hanover. Besides the great food, we got a chance to ogle an impressive Shelby collection included Gary Barnes’ ‘65 GT350R. With less than forty produced, they are not the usual fare. Showroom is as immaculate as the cars. 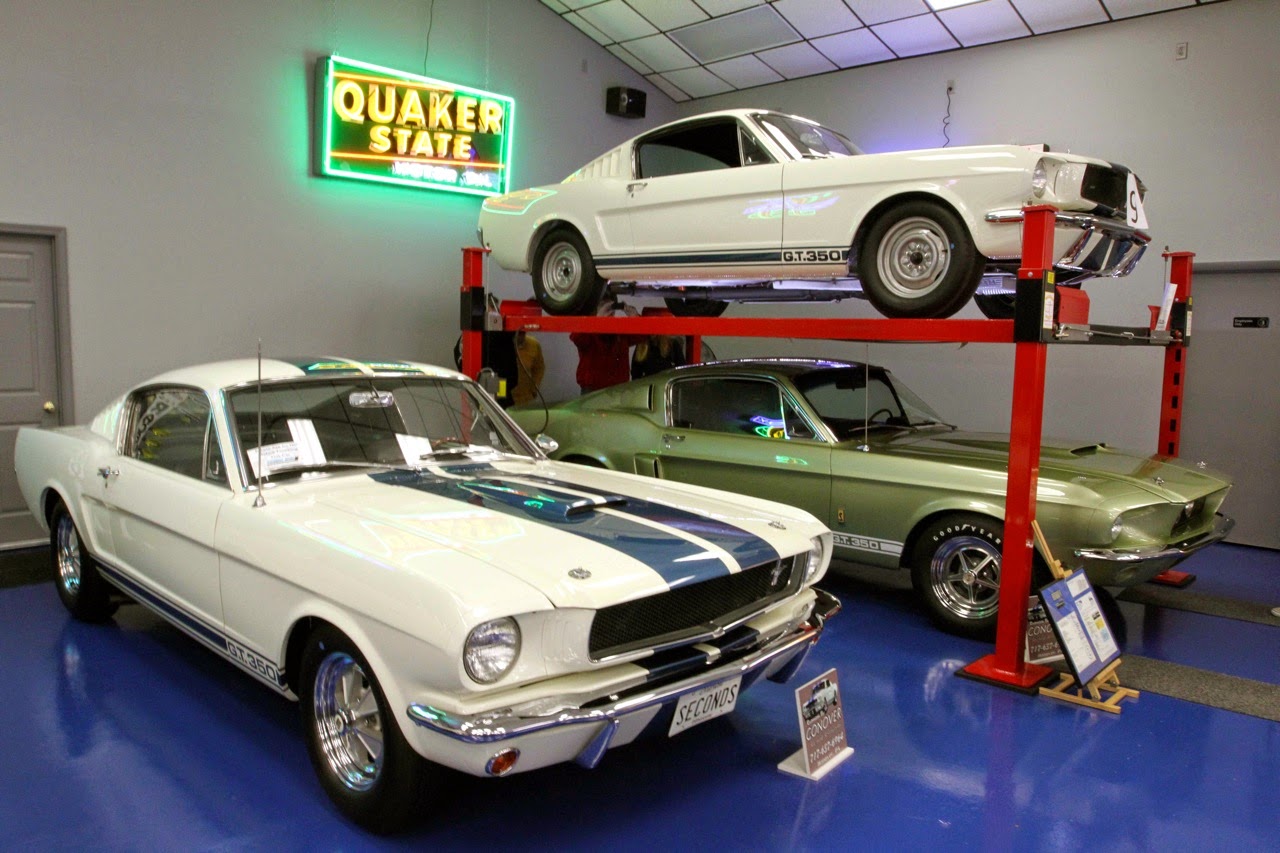 I suppose there are worse problems to have than having so many Shelby’s in one place that you need to stack them up. Here we have two ‘65 GT350s. The car on the hoist wears steel wheels, while the car on the floor has the more stylish Shelby Cragar mags. Under the hoist is a ‘67 GT350 showing evolution Shelbys underwent as the Mustang changed. 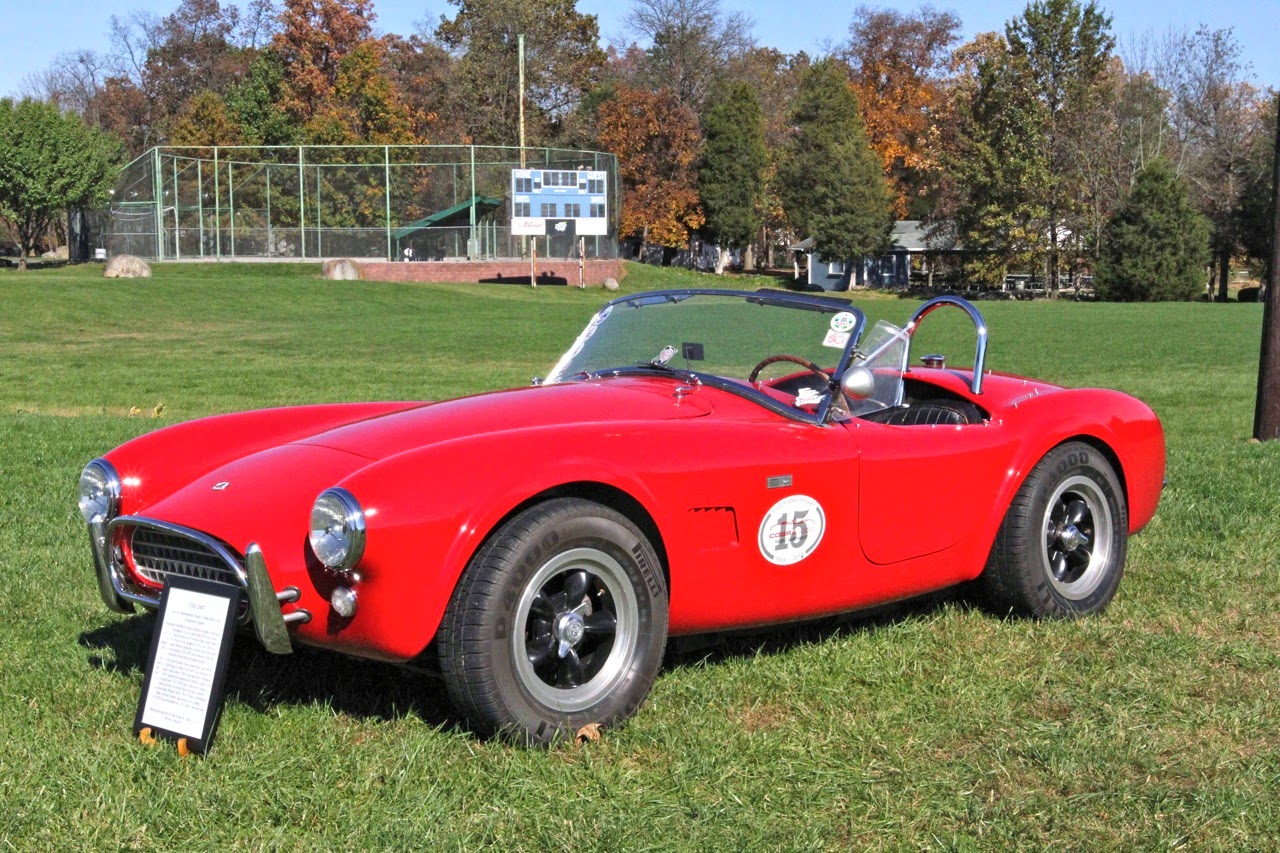 Sunday brought a car show organized by SAAC member Diana Duffee. Included was Suzanne & Shaun Lowry’s 289 Cobra which also participated in Saturday’s Tour. It was great to see an original and very valuable Cobra being enjoyed. Bearing chassis CSX2497, the car was equipped with knock-off American Racing wheels in place of the more common wire wheels or Halibrands.

Another original Cobra, chassis CSX3117, is an early 427 roadster. Note it lacks a hood scoop, side pipes and roll bar commonly seen on many 427 cars. Jeff Brenner’s example has an interesting history he is still tracing. Brenner does know that the car sat in a field for a few years and had been damaged in a fire. Assembling a car’s lineage can be a trying, but rewarding experience 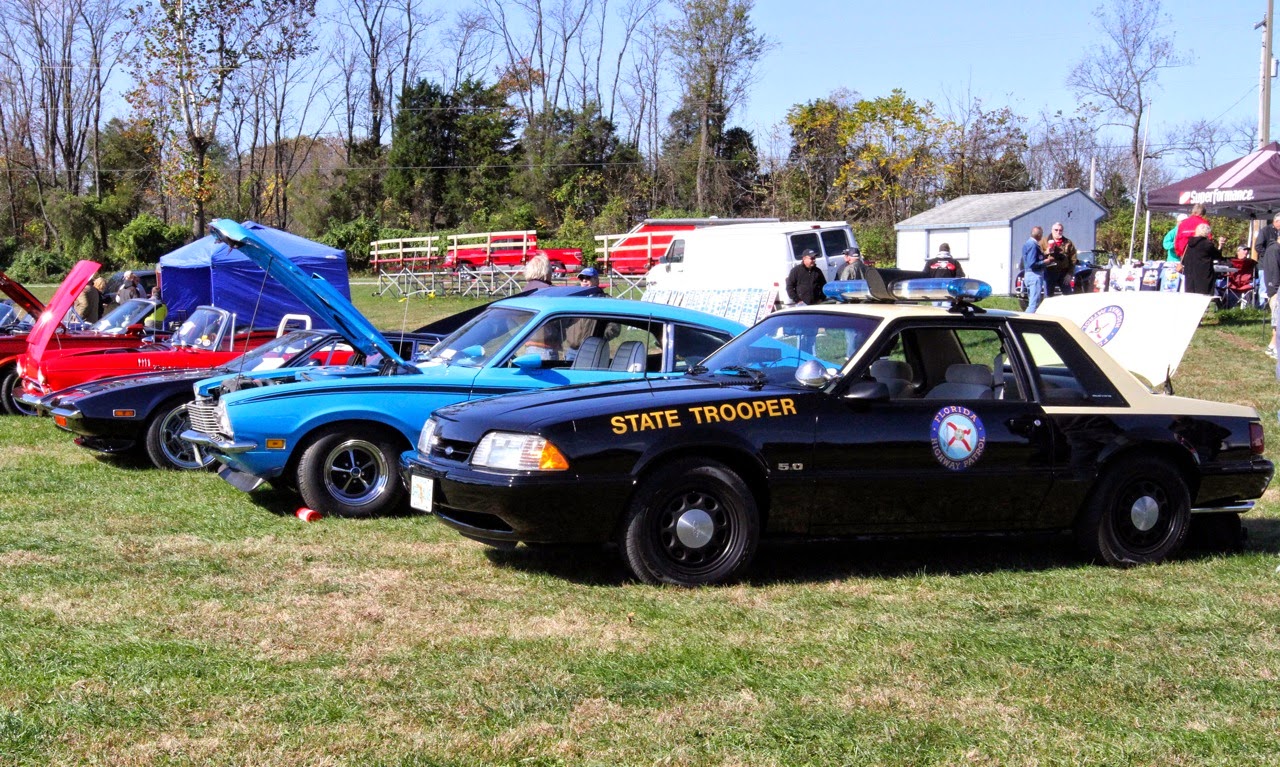 SAAC’s motto is, “Ownership not Essential – Enthusiasm Is.” In keeping with that theme, this shot captures the variety of cars shown on Sunday. Front to back we have: R. Harris’ Mustang Police Cruiser, R. Jamieson’s Mercury Comet, Henry Smith’s Pantera, David Lavertue’s Sunbeam Tiger and Anna & Dan Mohry’s Mercury Cougar. 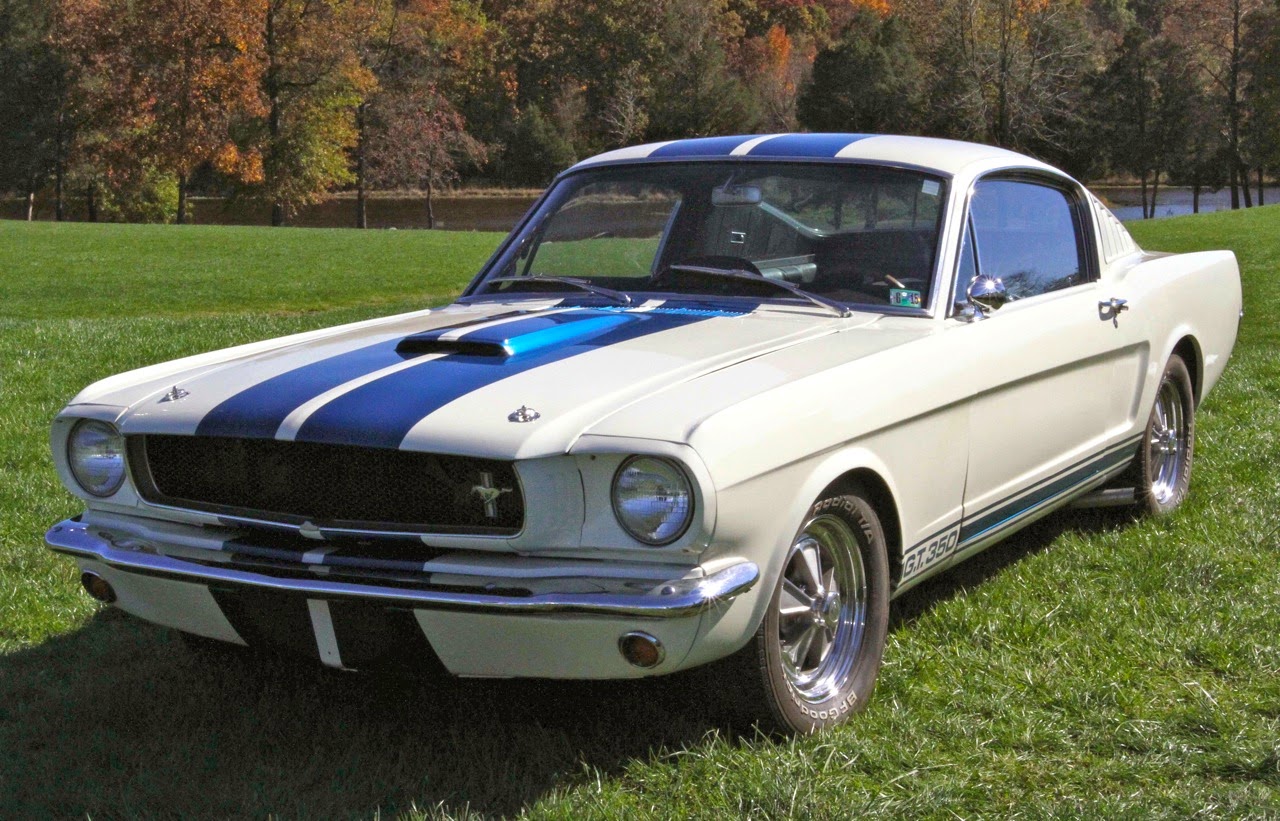 We’ll end with Nancy & Larry Schaffer’s ‘65 GT350. The fact that Larry is the original owner is only the beginning of the story. Larry settled with the insurance company after the car was stolen. It remained missing for around 30 years before being recovered. Following some legal haranguing, Larry reacquired the car and it was returned home as a member of the family.