With only six original Cobra Daytona Coupes built and valuations in the millions, this 427-powered replica SHELBY COBRA DAYTONA COUPE: FACTORY FIVE EDITION is an affordable and potent show or road warrior. 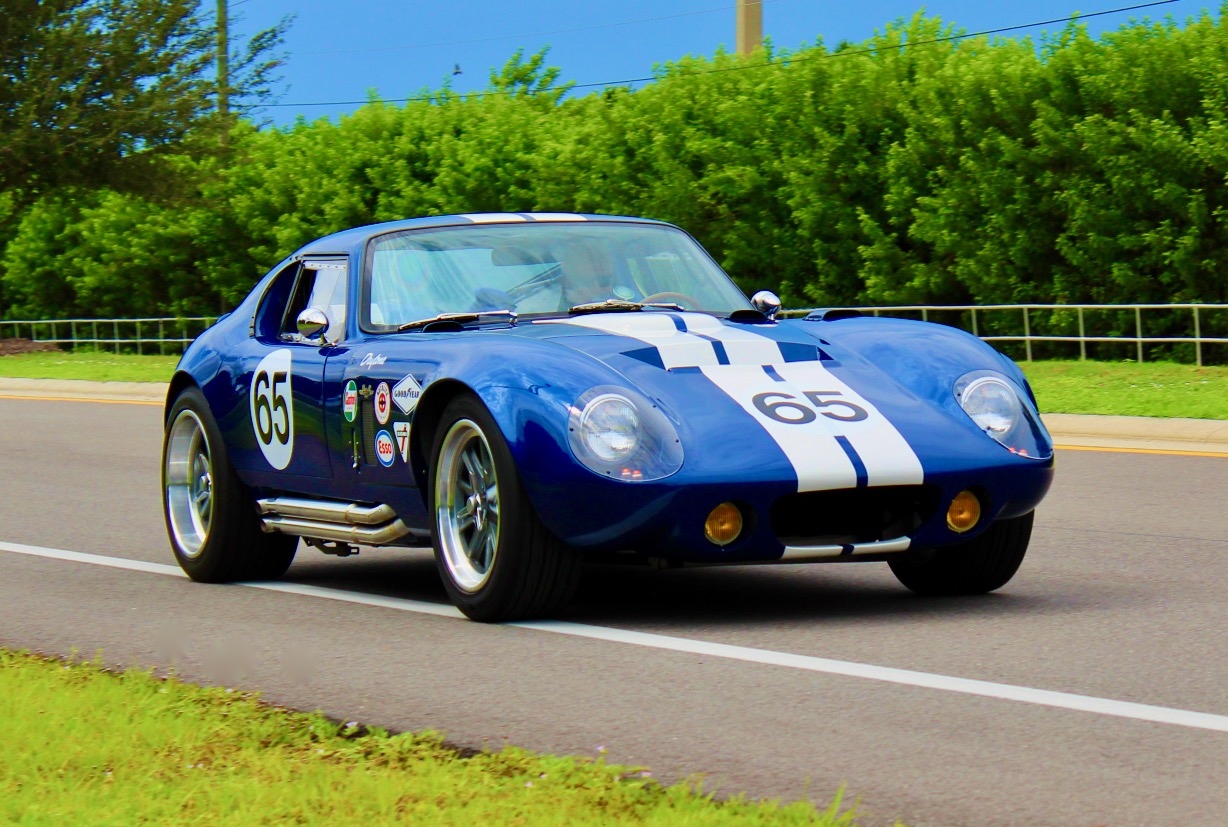 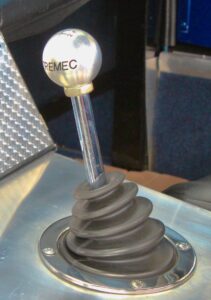 Considered royalty, the original Peter Brock-designed Cobra Daytona Coupe delivered the U.S. in 1965 its first and only World Manufacturers Championship for GT Cars. It would be unimaginable for the average car enthusiast to not find themselves easily enchanted by the barking, burbling sounds when firing up a classic sports car like this replica Daytona, and seeing it unleashed on the open road. Chances of seeing a real one on the road is slim to none, but a number of kit car manufacturers offer bodies and  rolling chassis ready for a powertrain. The one featured here is a modern Type 65 model, from Factory Five.

Only six original Coupes, powered by 289 Ford small-blocks with Weber carburetors, were built by Shelby American, the first in California and the remaining five at Carrozzeria Gransport in Modena, Italy. And, they were campaigned in the U.S. by Shelby American drivers and in Europe, with assistance from Alan Mann Racing in England. 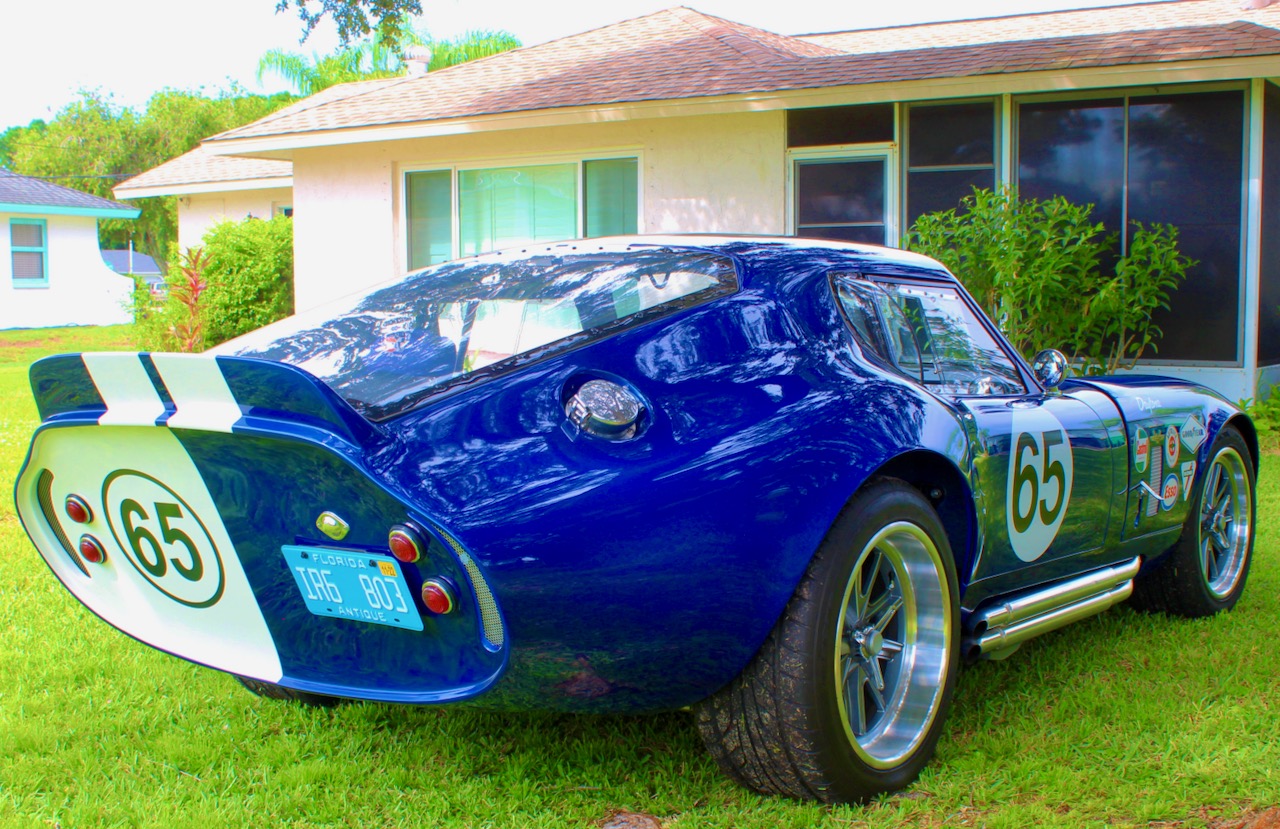 This Shelby Cobra Daytona Coupe Type 65 replica, attracts a crowd whether at a show or parked on the street. Made by Factory Five, it’s owned by Edgar Leon, Englewood, FL, who considers his Coupe a show-car built with a Grand Prix personality. And yes, even though it replicates a successful racing car, it is street legal! From the laminate composite body to the hatchback rear window, the Type 65 Coupe delivers an aggressive racecar exterior. It’s built with a jig-welded tube frame (95-inch wheelbase) and features a quality composite body with a hinged glass rear window. 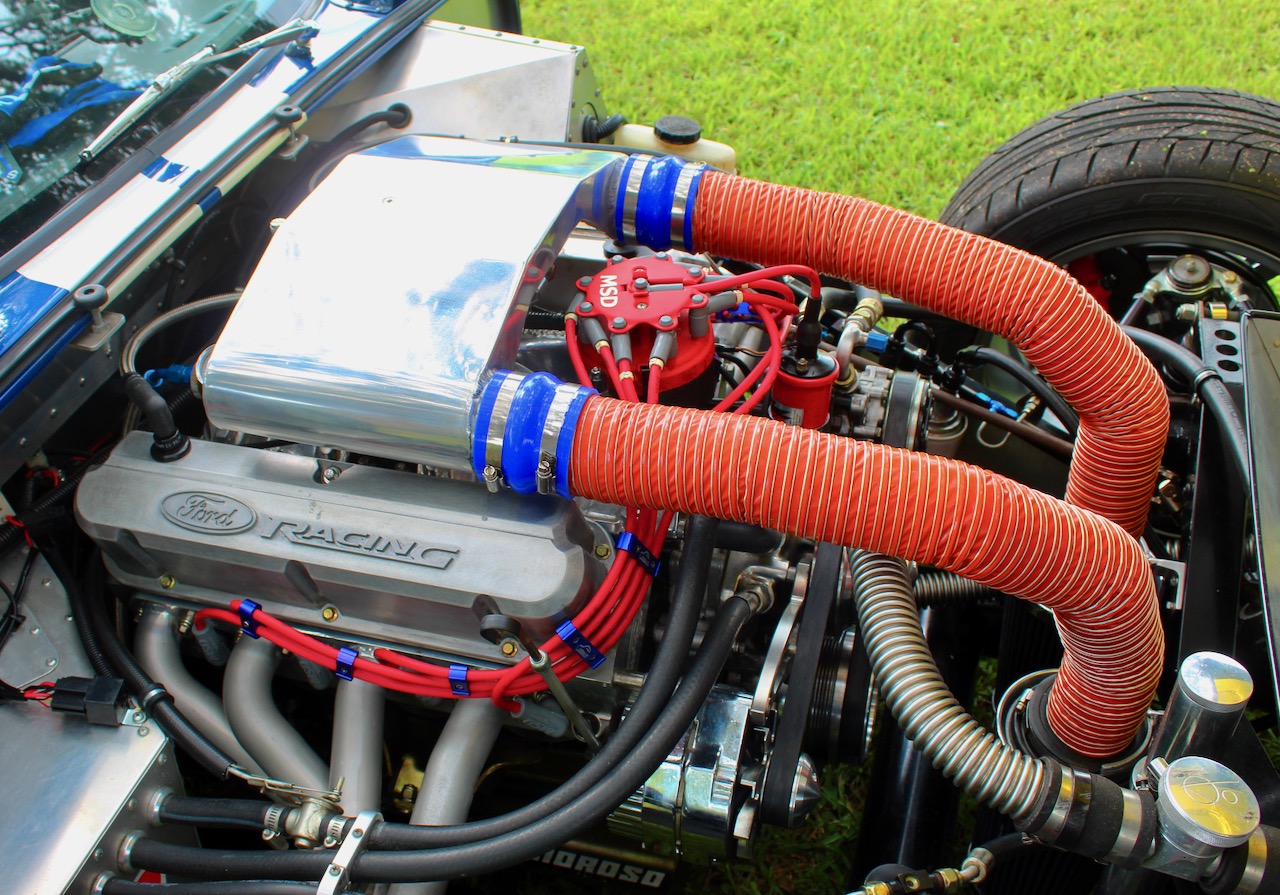 Resting under the well-secured hood is blueprinted 427-inch Cobra V8 engine, based on a Dart 351-inch Ford Windsor block bored to 4.125-inches and fitted with a forged 4.00-inch stroke crank from Smeding Performance. This is a serious engine with four-bolt mains, 10.2-to-1 compression forged aluminum pistons and forged steel rods. It’s a turn-key crate engine that Smeding Performance breaks in on an in-house DTS dyno before shipping to customers. Other details include 2.08/1.60-inch valve AFR aluminum heads, 750-cfm Quick Fuel Technology double-pumper on an Edelbrock Victor single-plane manifold, hydraulic roller cam, roller rockers and a seven-quart oil pan. Redlined at 6,500 rpm and running on 91 octane pump gas, output is a very respectable 560 horsepower! 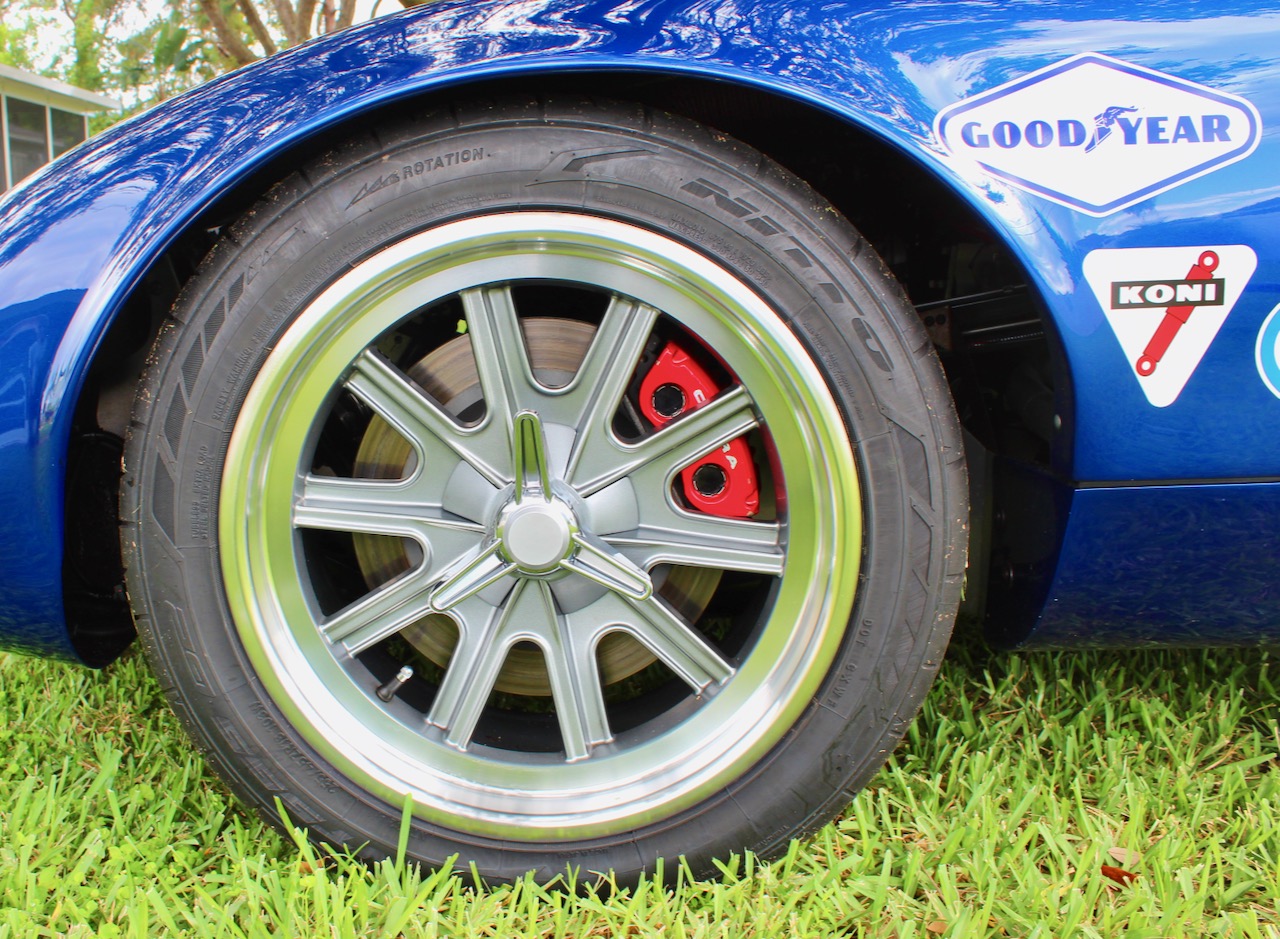 Chassis details include independent double arm front suspension along with a solid axle, FFR three-link rear suspension and power-assisted rack and pinion steering. The engine is hooked up to a Tremec five-speed transmission. When measuring the muscle, looks are just the tip of the iceberg. According to the specifications from Factory Five Racing, a 427 Type 65 Coupe is estimated to average 0-60 mph in 3.6 seconds, a 12-second quarter-mile at 115 mph, and a top speed of up to 150 mph. That’s serious performance, likely better than the original and more than adequate for vintage road racing. And, just right for the road! 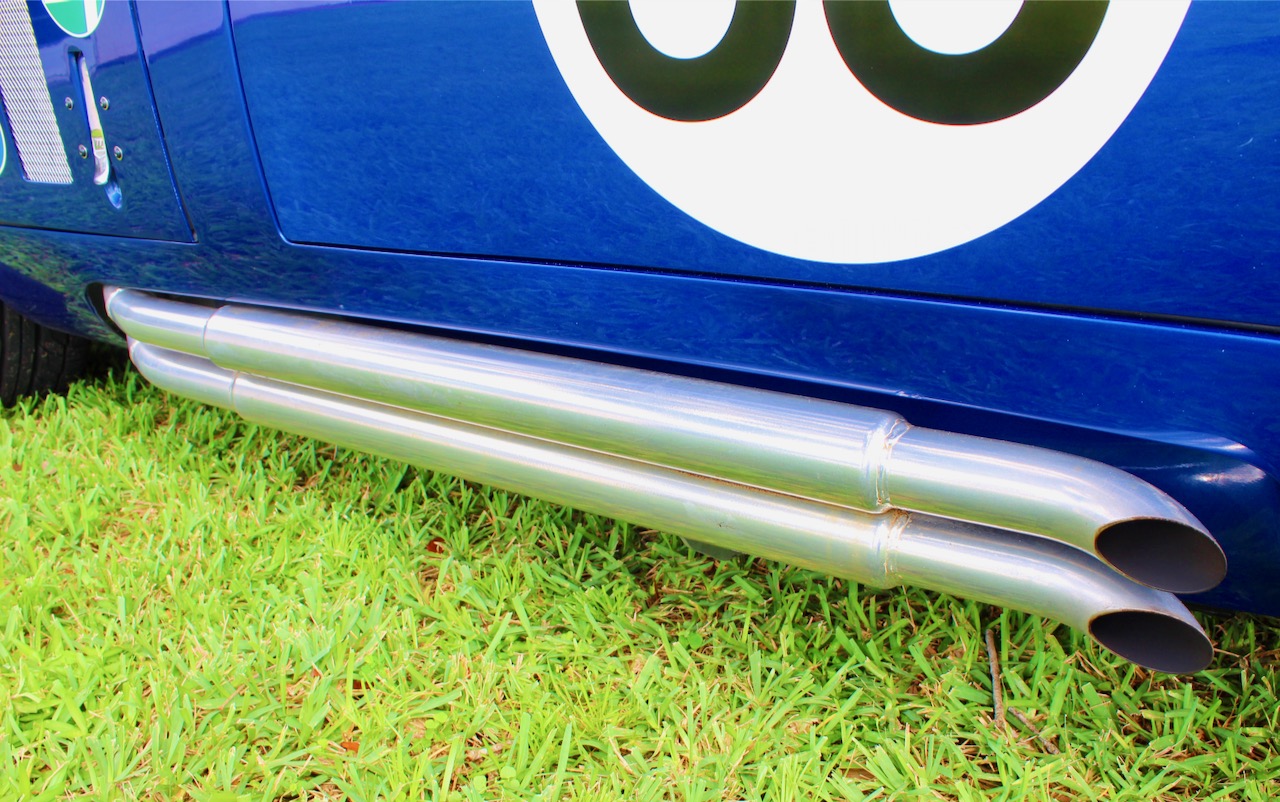 From upshift to downshift, Edgar Leon’s Coupe sounds like a racecar thanks to its potent powerplant and low-restriction side exhausts. It’s loud enough to wake up Dennis the Menace’s Mr. Wilson from his mid-day nap! From the driver’s perspective, Leon said the car drives very smoothly and requires a smooth touch from its driver because a fast car can become a loose car when pushing its limits. Otherwise, the car will get tail happy and spin out of control, a reminder to Leon and to every car enthusiast he meets that his Type 65 Coupe is strictly for show and gets really hot inside after driving on the road during warmer weather. It’s hard to imagine that one of the original Daytona Coupes was driven on the Bonneville Salt Flats without the benefit of AC. That car is now at the Simeone Foundation Museum in Philadelphia, PA 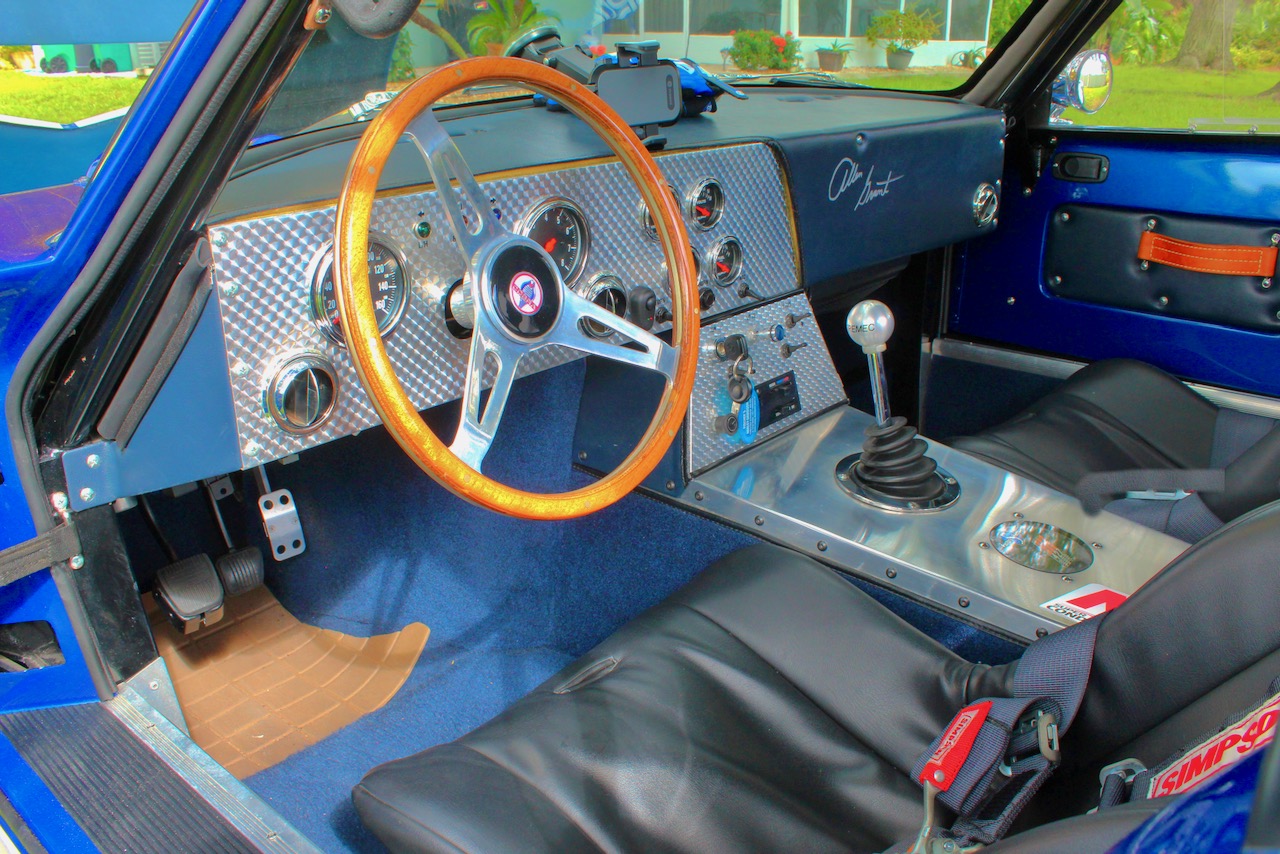 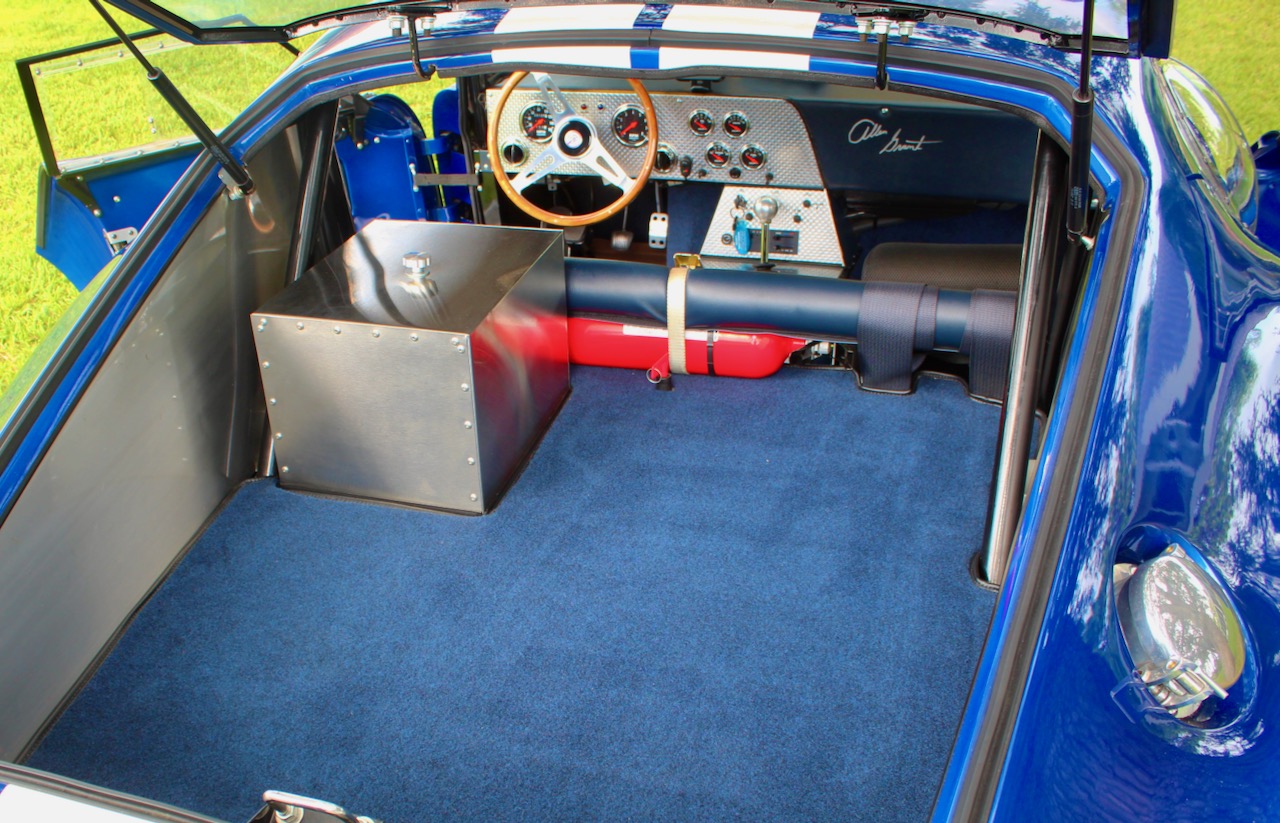 Race ready under the hood as well as inside, Edgar Leon’s Coupe comes with quality bucket seats, five-point Simpson harness, and Allen Grant’s signature on the dashboard. Grant raced Cobras and Daytona Coupes for Shelby American back in the day. Its interior is far more detailed and luxurious than Shelby’s original which was designed and engineered purely for racing on the world stage.

This coupe is a reflection of an iconic all-American racecar, driven by legendary drivers to legendary wins in Europe and the U.S.