Skip to content
Mike Matune joins in the ten-day celebration of ‘everything automotive’ at the PVGP and brings us highlights. 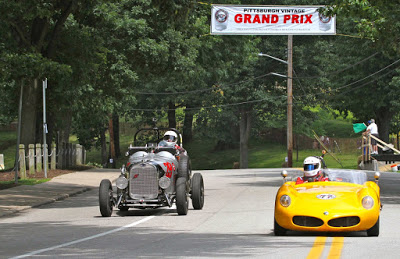 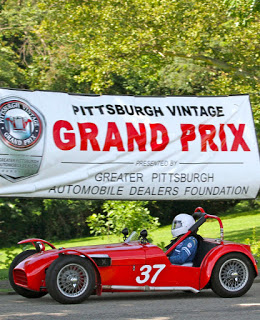 Over its 33-year history, the PVGP has raised over $4,000,000 for charities, including the Autism Society of Pittsburgh and the Allegheny Valley School. Returning as presenting sponsor this year was the Greater Pittsburgh Automobile Dealers. But as striking a venue as Schenley Park is, the quality and variety of the vintage racers competing really shines through. Bill Stelcher in his ‘29 Ford Model A Speedster and Alan Patterson in his ‘58 Elva MK III, above, taking the green flag along the start-finish straight. The top of Patterson’s helmet looks lower than the cowl on Stelcher’s racer! Here we have George Vapaa and his ’59 Lotus Seven, right.

Modern race tracks may have lost some of their visual impact, but that is not true of Pittsburgh where cars compete on streets surrounded by the grandeur of Schenley Park. The inside of Turn 19 is marked by an imposing stone wall; the outside by a hay bale barrier, trees and an embankment. All of these are likely on Perry Genova’s mind as he maneuvers his BMW 2002, below, around the circuit. 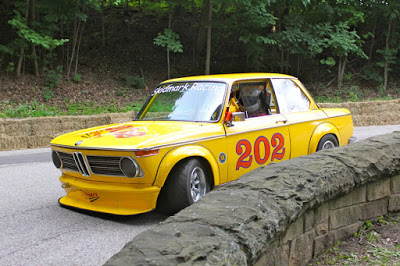 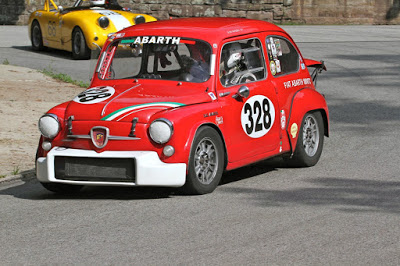 This year the PVGP celebrated “The Marques of Italy” and here’s a wonderful example of Carlo Abarth’s magic. He tweaked an everyman’s econo-car – Fiat – into a fire-breathing racer. Alain Raymond came from Quebec, Canada to test his abilities and those of his ‘64 Fiat Abarth 1000TC on the streets of Schenley. 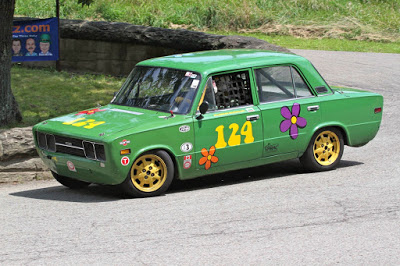 While there was all manner of Italian automotive finery racing in the Italian Marque race on Sunday, Canadian Andrew Celovsky’s Fiat 124 Sedan certainly stood out. Affectionately named “The Green Thing”, its flower power graphics were in keeping with the time in which this car first roamed the streets. 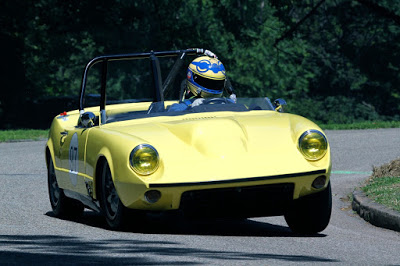 Staying in the theme of unusual vintage racecars, we have Stefan Vappa’s ‘68 Saab Sonett V4. A longtime member of the Vappa family, the car languished for years after an accident until its rise from the ashes as first an autocrosser and then a vintage racer. Along the way it acquired its owner-constructed roadster bodywork, retaining its German Ford built V4 engine. Stefan’s helmet graphics take us back to the origin of Saab as an aircraft manufacturer. 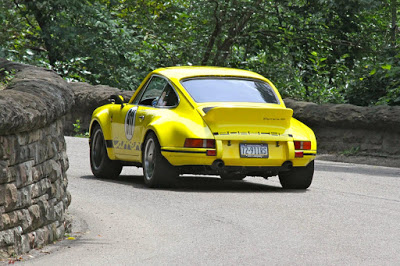 On most tracks an off-course excursion will get you into a runoff area or maybe trapped in a gravel pit; but here the consequences can be a little more daunting. In the run down towards Turn 20, Chuck Kelly carefully places his Porsche RS on the road to avoid any unpleasantness. 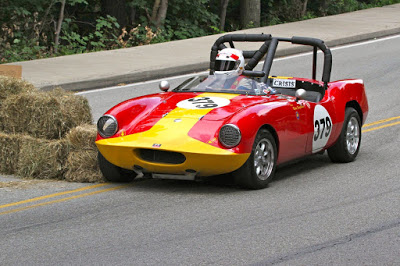 The back straight at Pittsburgh is marked by a hay bale chicane to slow the competitors on the fastest part of the circuit. There is a lot of jockeying on the approach, as the cars need to traverse the chicane single file. Once in the chicane, it is important to pass as closely to the bales as possible, but not too close! Nate Scigliano gets it right in his ‘59 Elva Courier. 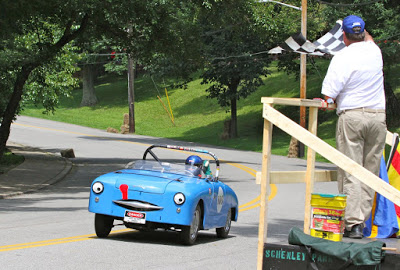 At the end of the Group 2 Winner’s Circle Feature Race, Robert Deull flashes a thumbs-up as the starter waves the checkered flag. Deull’s Panhard Dyna Junior seems to grin in agreement. 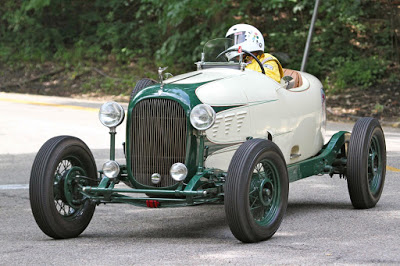 Lester Neidell’s ‘33 Plymouth Speedster conveys the feeling of a time in racing when a racecar was what you had and what you could make. Often very closely related to a donor car in terms of mechanical components and drivetrain, they were stripped for weight reduction and had bodywork designed to reduce drag with no thought to downforce. It looks like Neidell is putting his all into wrestling his Speedster around the course. 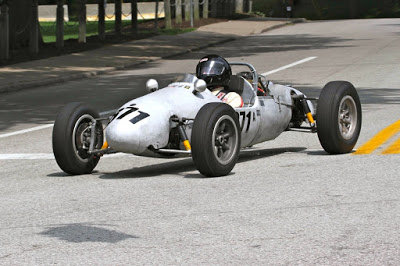 If you were an aspiring racecar driver in the 1950s, this is likely the kind of car in which you cut your teeth. Innumerable drivers, some famous, others best forgotten, ran these cars throughout the world. Peter Rehl’s ‘57 Cooper is powered by a Norton Manx motorcycle engine running on alcohol. Rehl described the car as a “sophisticated go-kart” with its simple tube frame, traverse spring suspension and solid rear axle. 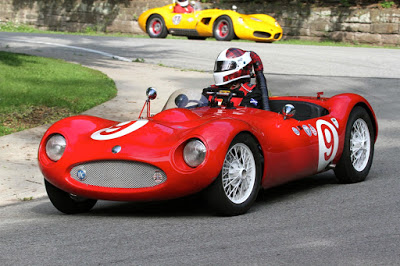 The atmosphere at Pittsburgh is very family-oriented, both in the spectator areas and on track. Numerous families compete every year, including the Pattersons who brought multiple racecars and three generations of drivers. Here Alan Patterson III tries his hand at the Westinghouse Bend in his ‘59 Elva MK IV.