Skip to content
‘When it comes to experiencing vintage racing greatness, the Reunion has few equals,’ blogs Mike Matune. 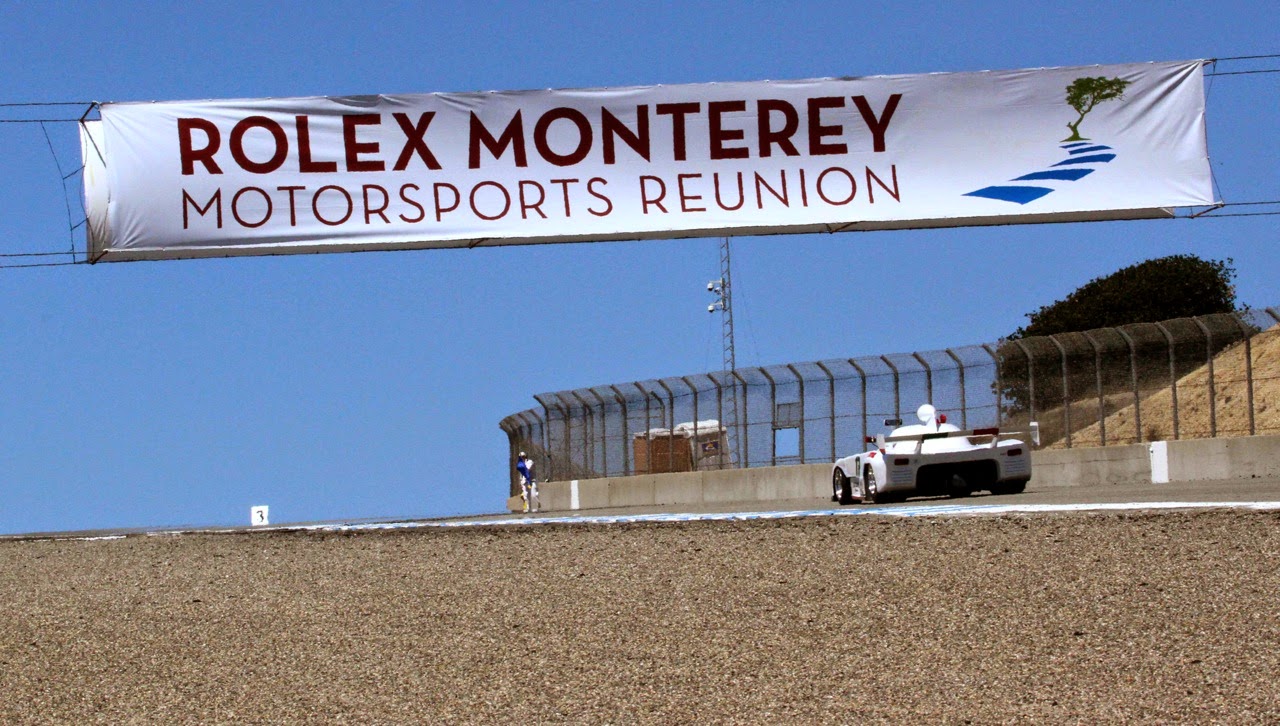 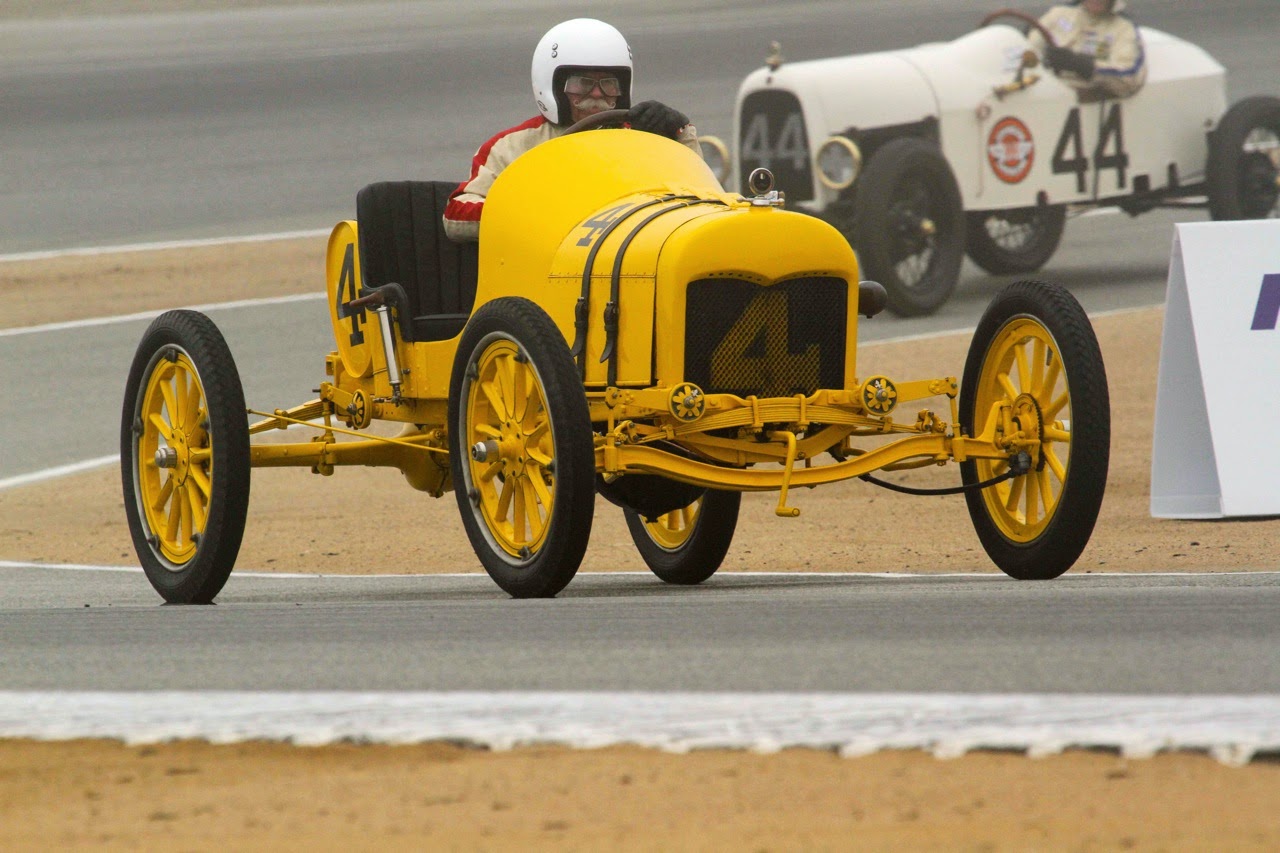 Mid-August brings us what is lovingly referred to as Monterey Hell Week and the Rolex Monterey Motorsports Reunion at Laguna Seca. The Reunion is what vintage racing aspires to be, a collection of truly important cars and drivers competing head to head. Eddie Lawson, top, climbs the Rahal Straight towards the “Corkscrew” in Racing Commonwealth’s Osella PA 3/5.

I have been attending the vintage races at Laguna Seca off and on since 1990. In that time, two things have become Monterey traditions for me. One is the damp, cool early morning fog; the second is Ed Archer’s ‘15 Ford Roadster, OLD NO. 4, above, contesting the Pre-War
racing group. The period uniformed Archer with his distinctive handle bar mustache
drives his car to and from the event. 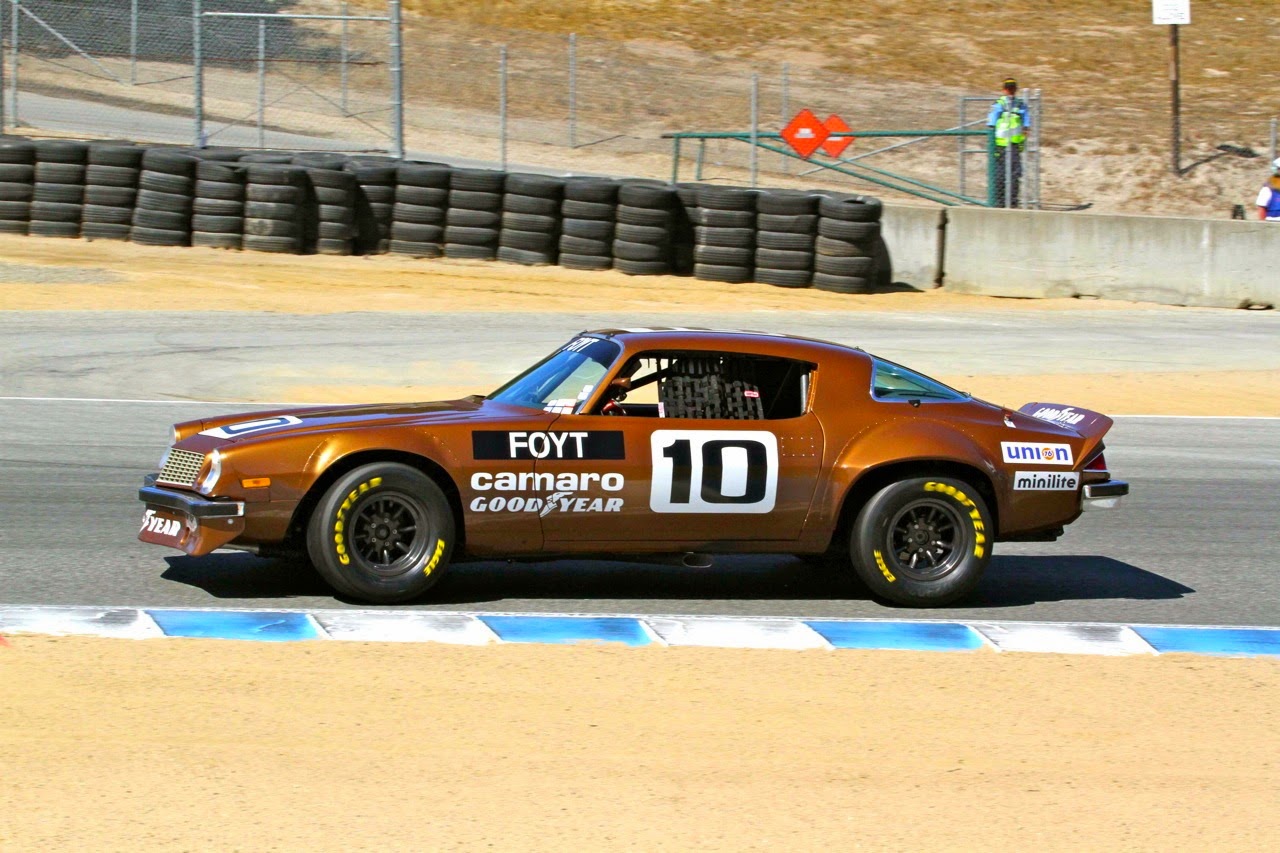 The concept of the International Race of Champions (IROC) was simple, combine some of the world’s best drivers in identically prepared cars and set them loose on a collection of oval and road courses. Leon Desimone brought out his Camaro, which competed in three seasons of
IROC racing with drivers as varied as Indy Car’s Foyt & Rutherford; NASCAR’s Pearson and Formula One’s Hunt and Schecter. 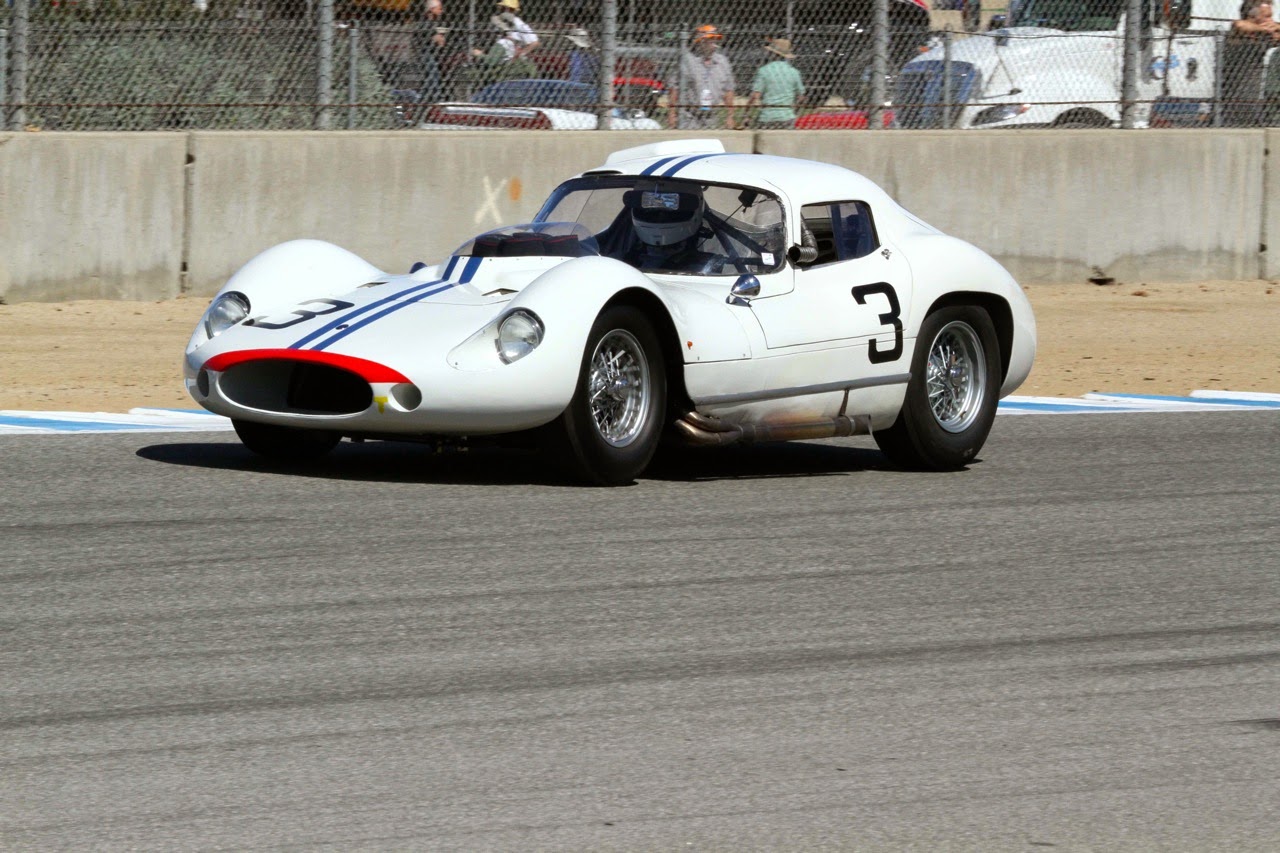 This year’s featured Marque was Maserati, celebrating their 100th year. Among the many representatives of the Trident was Lawrence Auriana’s Tipo 151 driven by Derek Hill, son of the late World Champion Phil Hill. Built at the behest of Briggs Cunningham to assault Le Mans,
the cars were less than successful. Later one of this car’s sister vehicles would be involved
in Marvin Panch’s devastating crash at Daytona. The ensuing actions resulted in
Carnegie Hero medals for the five who rescued Panch. 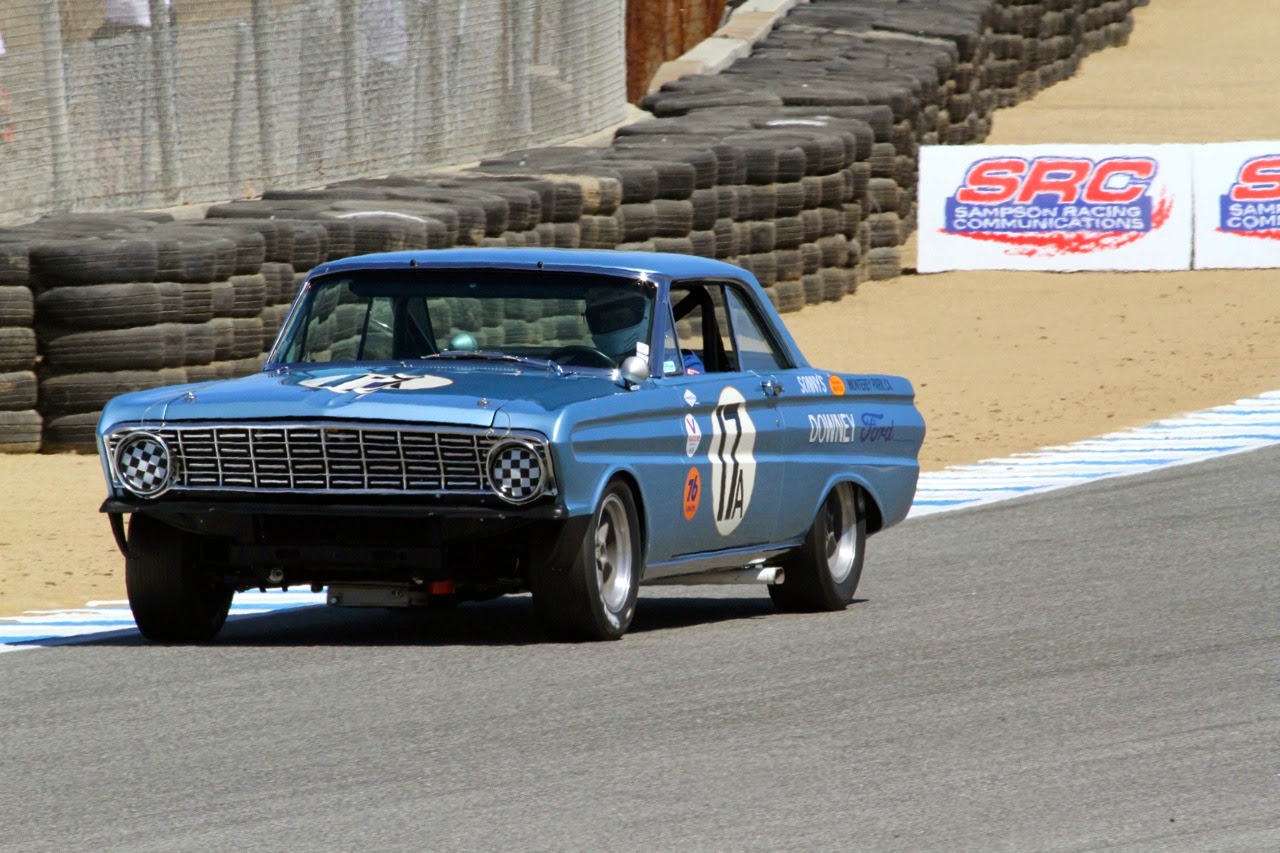 Mike Eddy brought his ‘64 Falcon to compete in the Historic Trans-Am group, little knowing he would leave with The Spirit of Monterey Award for best displaying the spirit of the weekend. Eddy’s Falcon was a pioneering racer in SCCA’s fledgling Sedan classes. Later it would compete in the inaugural Trans-Am season’s final race at Carroll Shelby’s request to keep points from rival Chrysler’s effort. 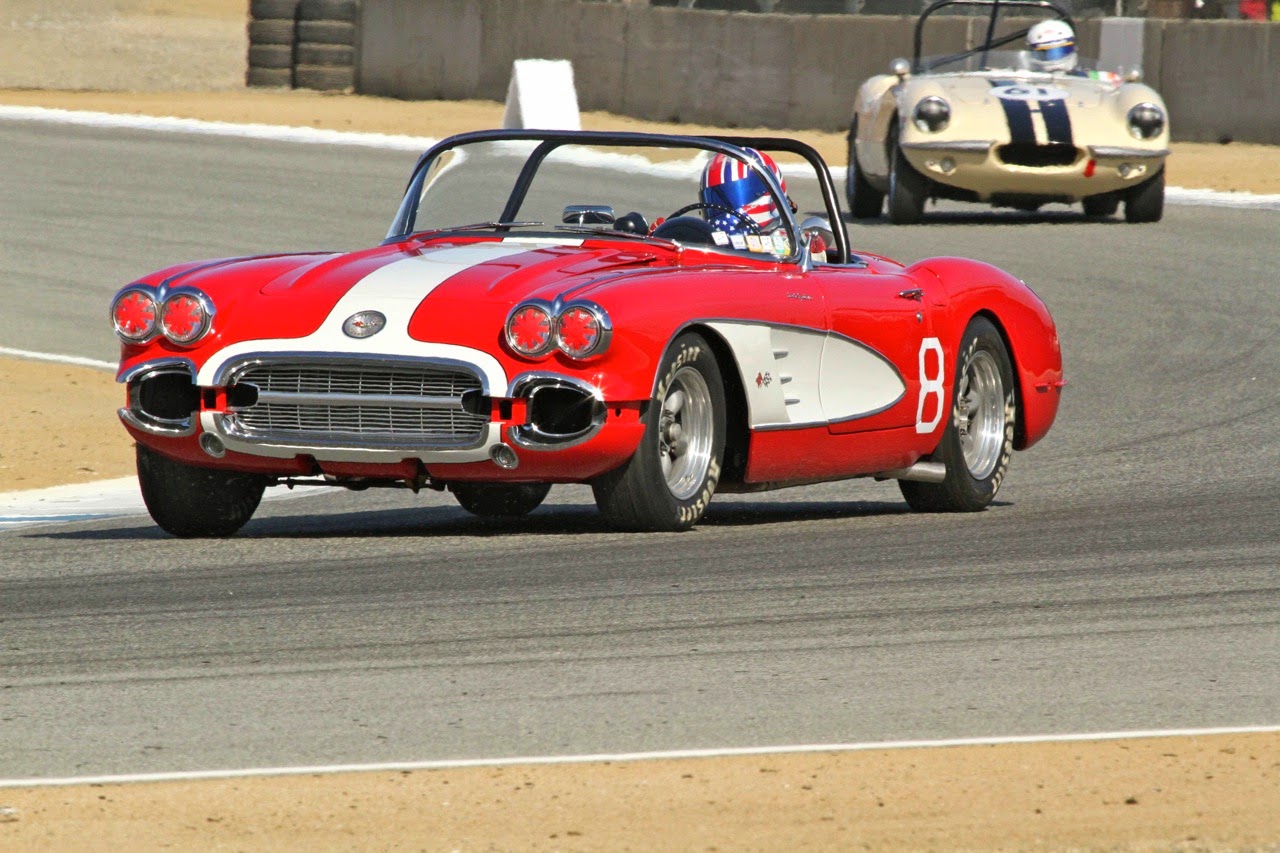 Greg Johnson’s ‘60 Corvette has been a racer since ordered with all the factory goodies over 50 years ago. Along the way it competed at legendary East Coast venues against the best SCCA racers of the day, achieving a remarkable track record. Records indicate Johnson’s Corvette was a Championship winner at the Regional level and earned a “Three-Peat” in the Pennsylvania Hill Climb Series.  Constantly evolving, it would serve time on the street. 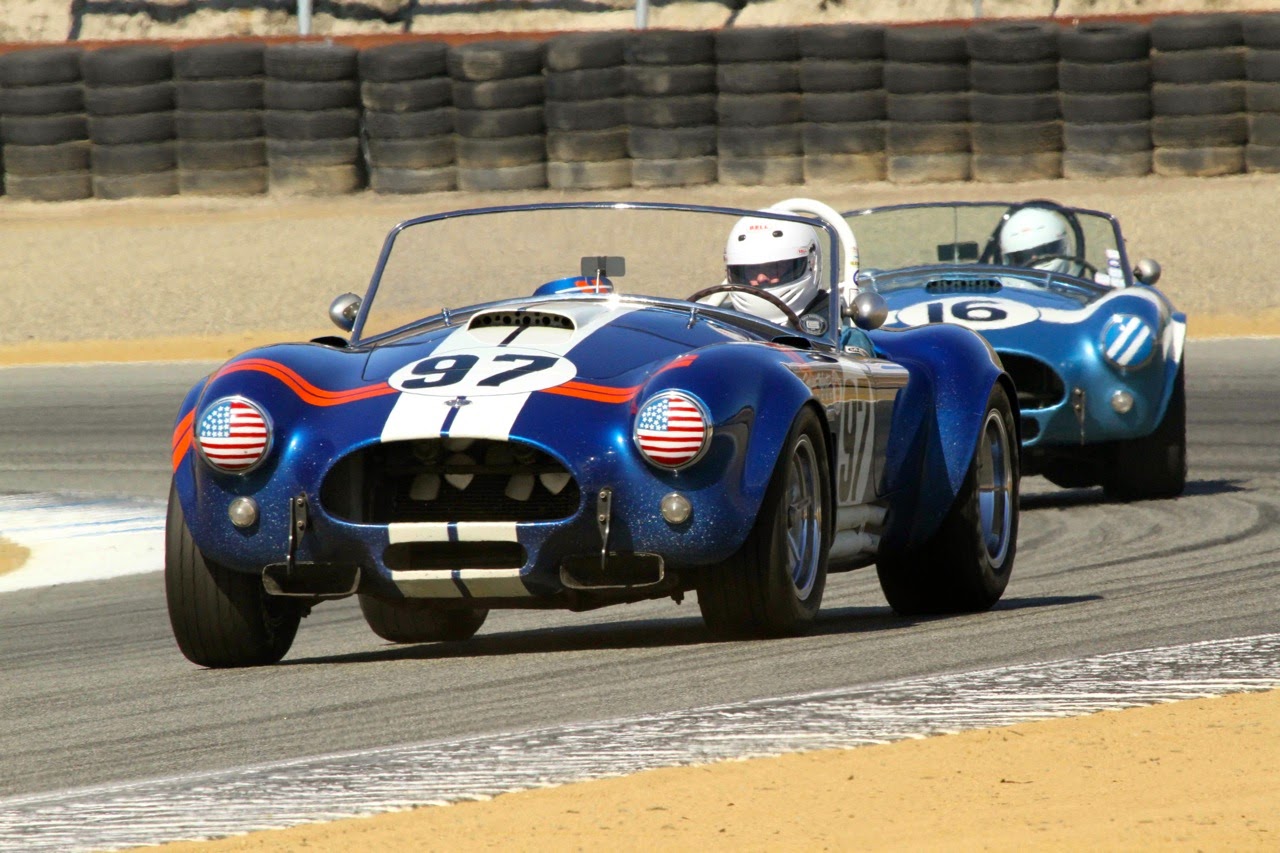 As Cobra prices soar, an unfortunate consequence is that you no longer see many driven in anger on the track. Things at Monterey are a little different as shown by Steve (97) and Tim (16) Park in Lynn Park’s genuine 289 cars. Steve’s car is an early example (10th built) and was a factory racer. Tim’s was one of the initial group of Cobras sent to Europe to compete in FIA sanctioned events. 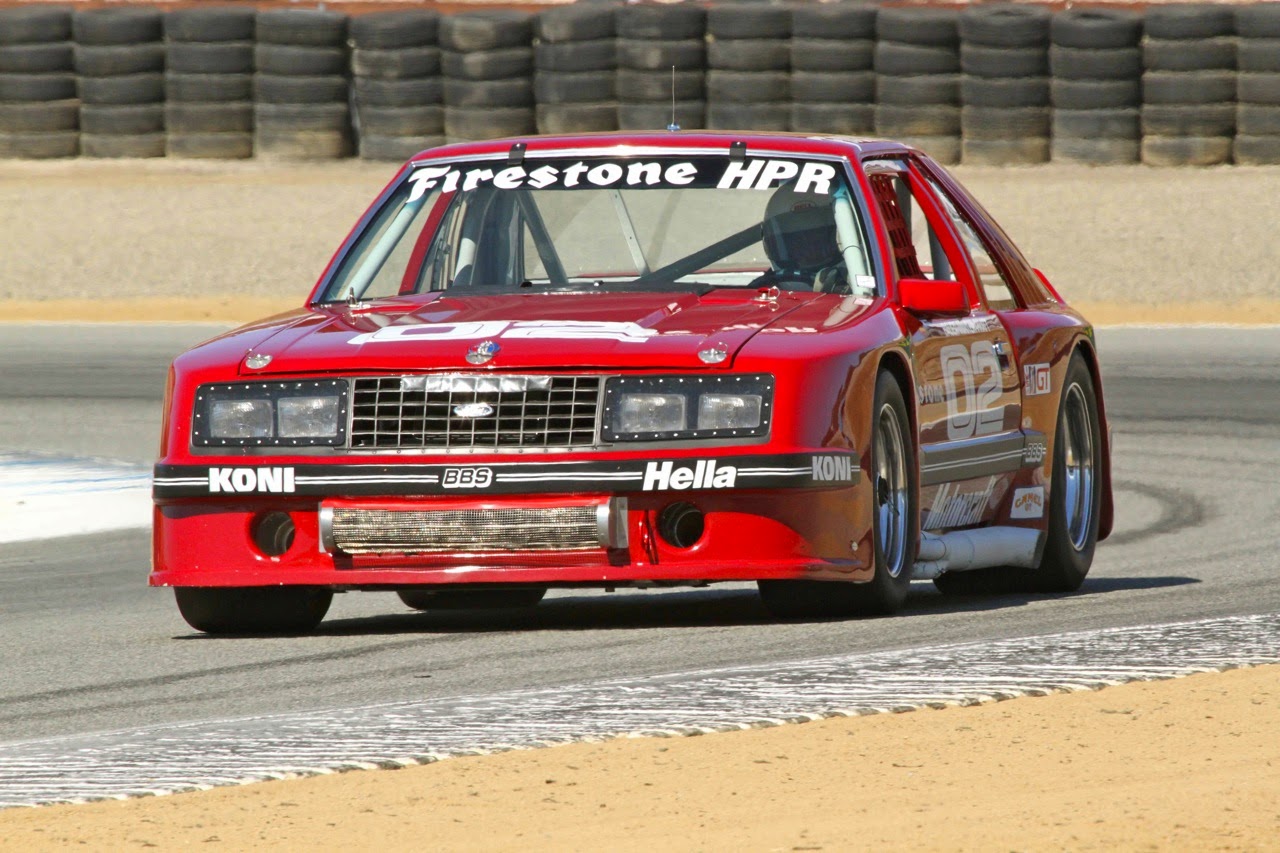 Chris Liebenberg of the 3 Dog Garage pushes Ross Myers’ 1982 Mustang through Turn 3. In period, the car was driven by Milt Minter, Gary Pratt and John Bauer and contested GTO in IMSA competition. In addition, it won an FIA event at the Fuji Circuit, Japan that year. 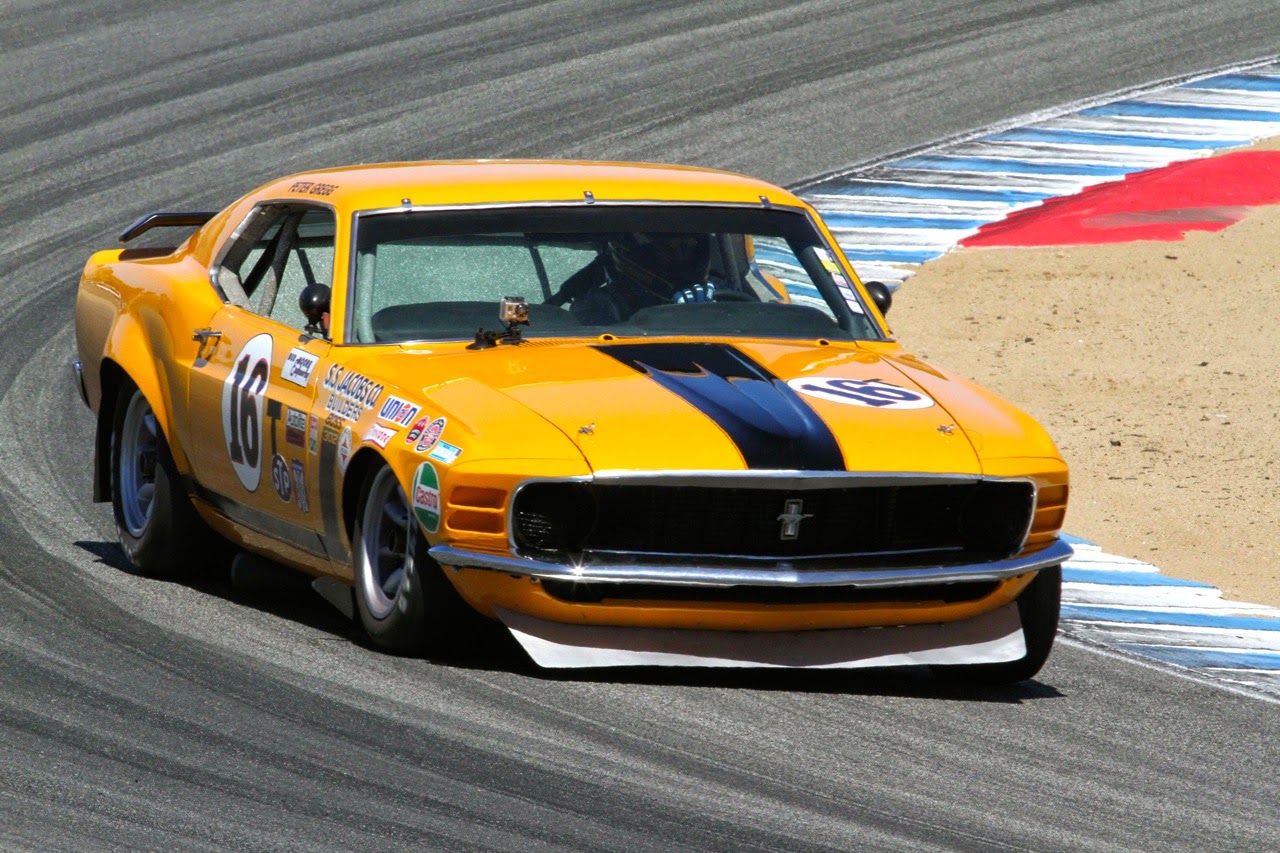 While Ford would end its factory involvement in the Trans-Am after clinching the 1970 championship, Bud Moore continued as an independent. He fielded entries for the likes of Peter Gregg. Here Ken Epsman hugs the apex in Turn 5 in Jim Hague’s car. 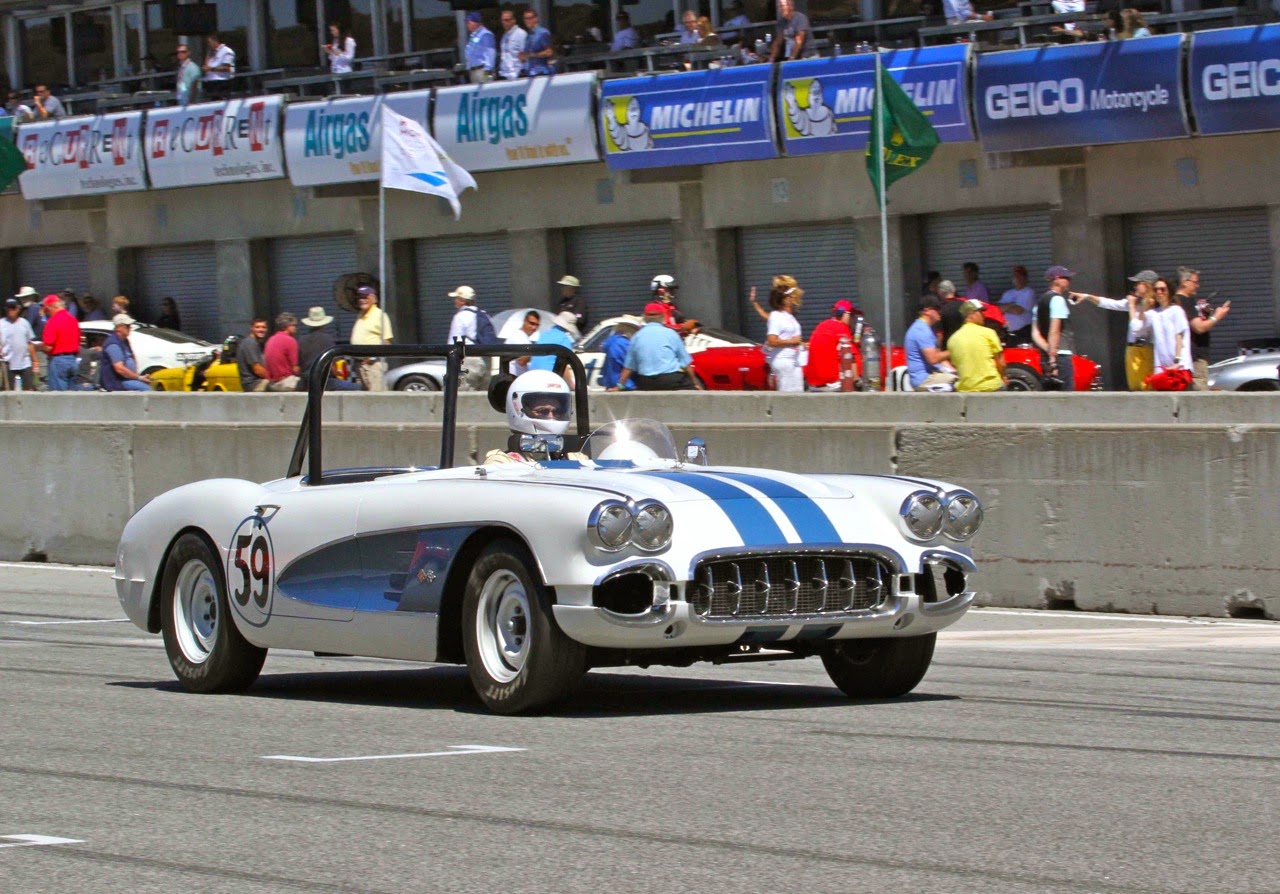 To get as much racing in as they do at Monterey requires a certain level of precision. As Ron Cressey’s #59 Corvette passes the pits on the front straight, you can already see the next group forming for their race. Cressey’s car is a long time vintage racer that has achieved multiple victories at Monterey. 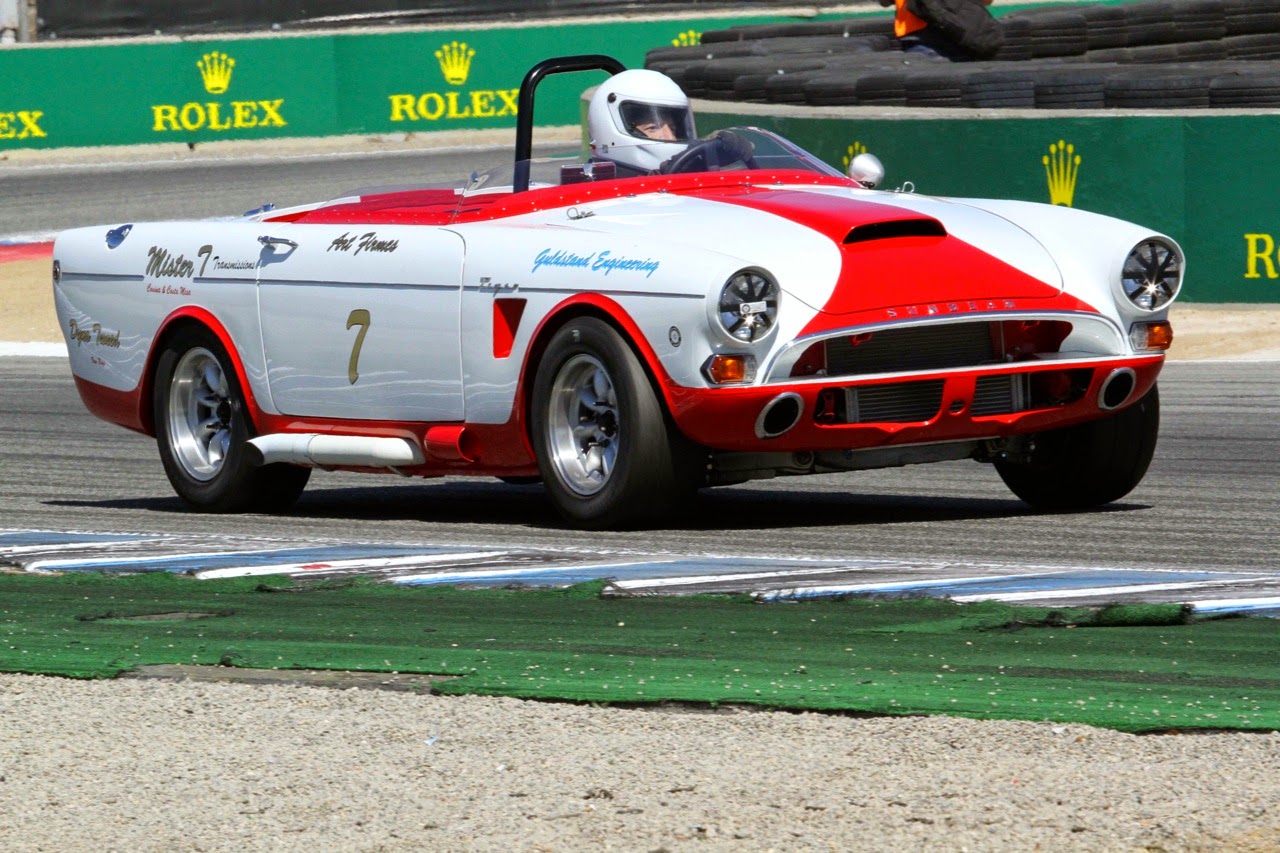 Among the nearly 550 cars competing at this year’s Reunion were a number of Sunbeam Tigers. Each was interesting, but the history of Steve Sorenson’s example was intriguing. Originally converted to a racecar when new by Lew Spenser, it was later sold to Art Firmes. On the front fender is the name of Corvette racer, Dick Guldstrand. He and Firmes were friends and Guldstrand maintained the car, adding such touches as a frame modified as Guldstrand did with early Corvettes and ‘63 Sting Ray exhaust pipe bezels used as front brake scoops. 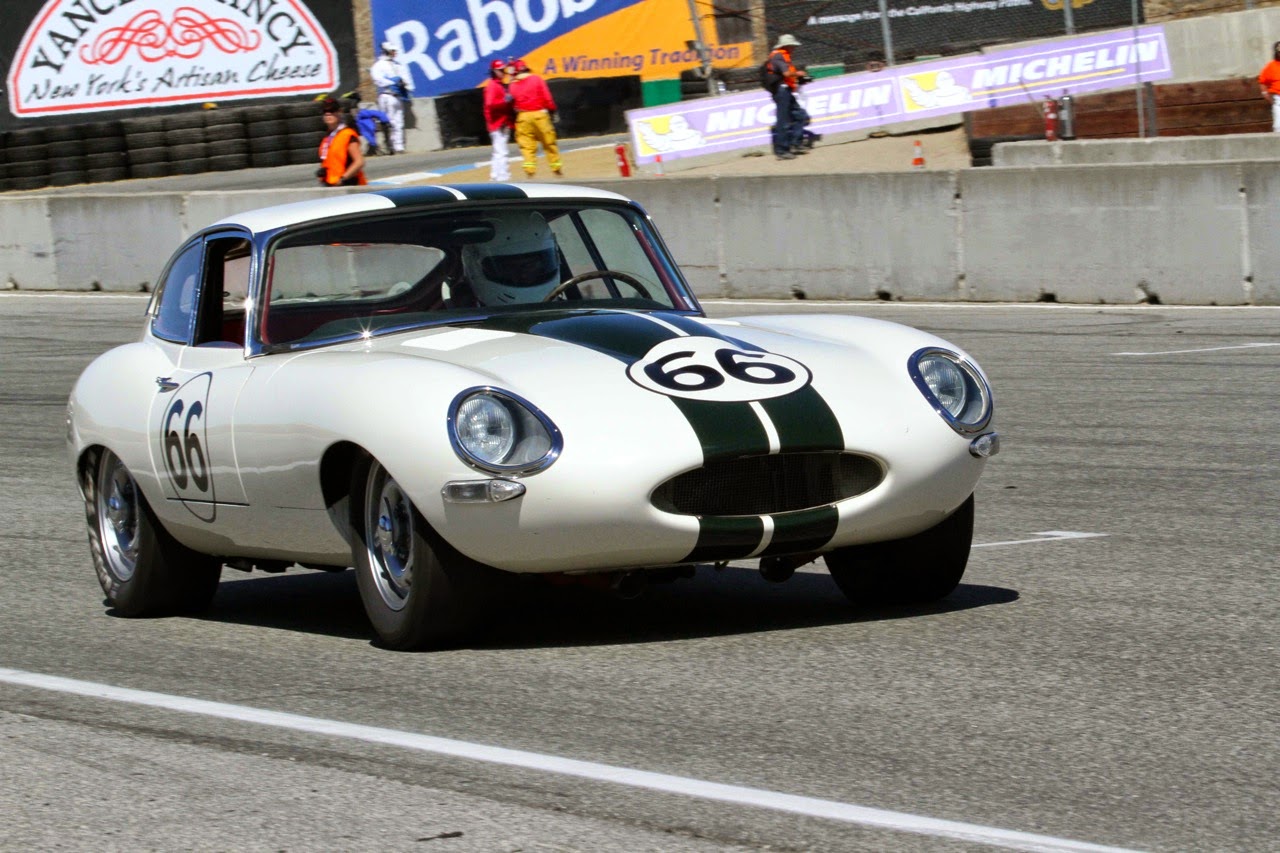 One cannot possibly fault the lines of Jaguar’s E-Type as exemplified by Michael Doyle’s 1962 coupe. From new, the car was converted to a racer with extensive modifications to its engine, suspension, brakes and bodywork. It would compete on the West Coast until 1972 before being laid up. Doyle has done all of us a favor by returning this very distinctive car to the track. 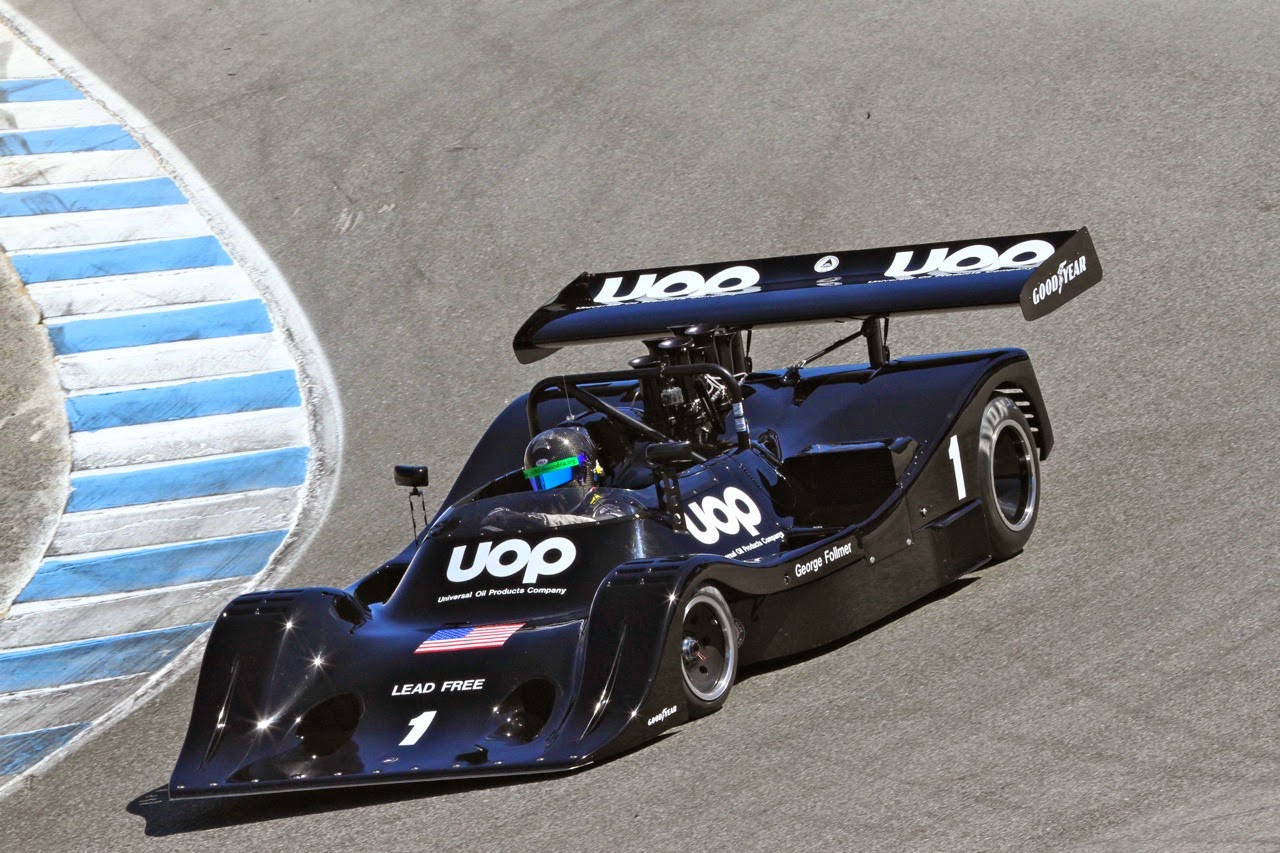 By 1974, the final year of the once proud Can-Am series would fizzle out after but five of a scheduled eight races. The one bright spot that year was Don Nichols’ Shadow Team with Jackie Oliver and George Follmer driving. It was just too little, too late for Shadow and the Can-Am as a whole. But Michigander Craig Bennett gave us a taste of that bygone era, wringing the best from his ‘74 515-inch Shadow DN4 to clinch Group 3B for Can-Am and USRRC cars. 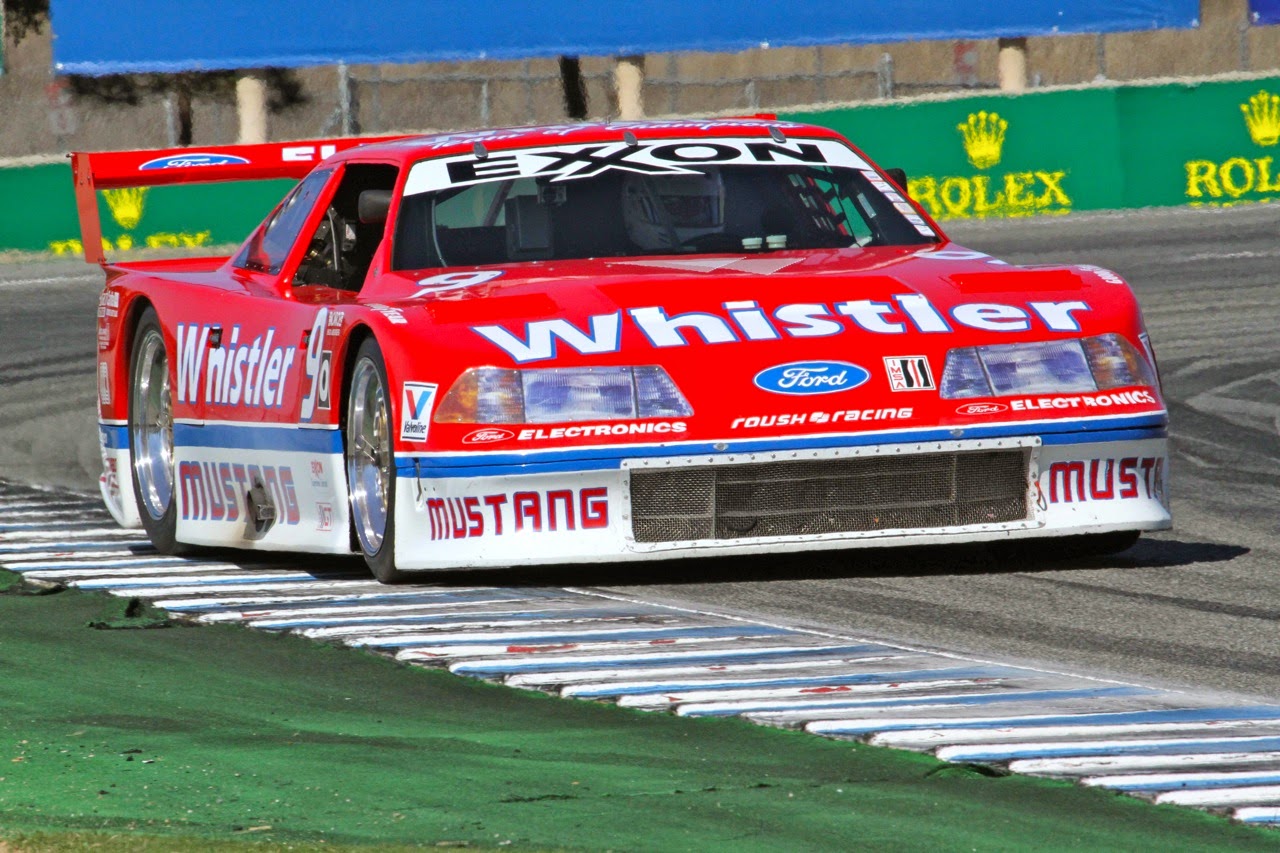 In 1991 Robby Gordon drove his Roush prepared Mustang to three victories and second in the series point chase. The car marked the first time a Roush car would use a rear-mounted transaxle and the last time a turbo engine would be employed. After residing in a museum for over ten years, Steve Schuler is racing it again. 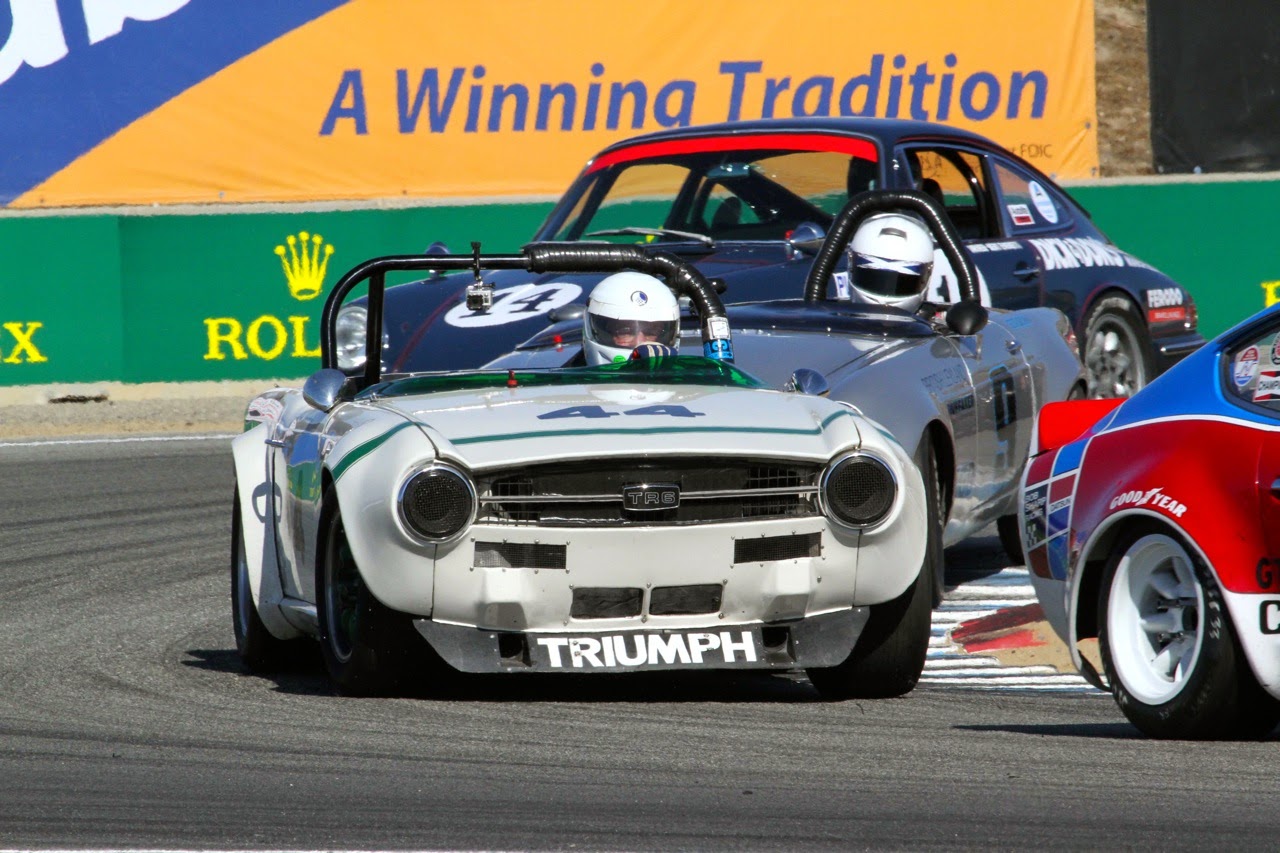 Amelia Island Concours founder Bill Warner brought his two-time championship winning TR6 to Monterey as part of “Team Amelia.” Bob Tullius and Paul Newman had owned the car. Here Warner endures something of a traffic jam in Turn 11, as he turns onto the front straight. Warner would be awarded The President’s Cup for having the car with the most significance to Laguna Seca, returning 40 years after last appearing here.