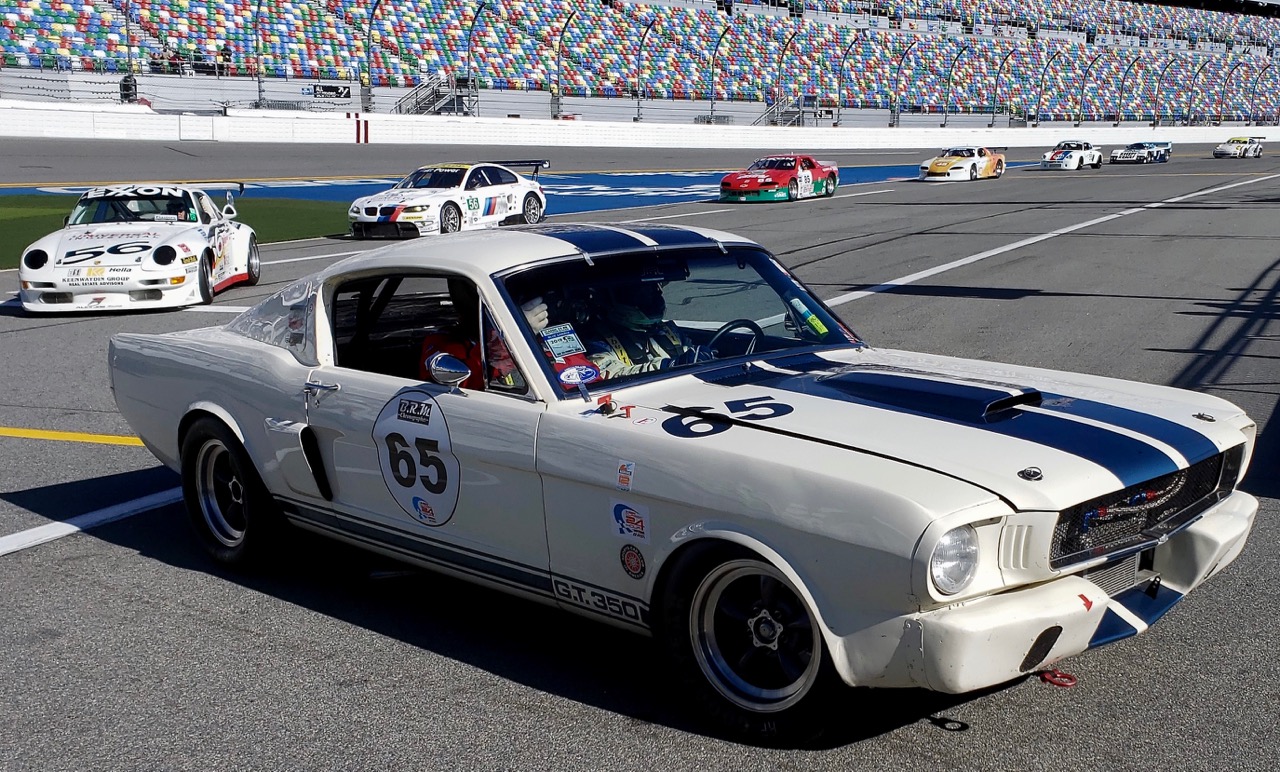 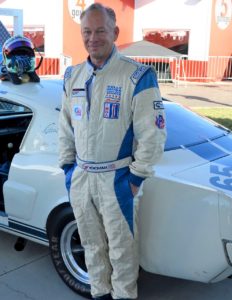 They weren’t supposed to duel on track – not really. And Darek Stennes’ real ’65 Shelby GT350 didn’t race at Daytona International Speedway during what’s known as the Rolex Legends. But watch the car as it roars on track during the vintage high-speed demonstration laps before the Rolex 24 at Daytona recently, https://bit.ly/2uB6PBn and there’s serious Shelby shenanigans going on with a blue and orange GT 350 as they arrow into the road course’s winding asphalt.

Stennes, executive chef at Jacksonville’s River Club, has been helming this GT350 for more than 40 years, and knows how to hustle it through any corner. Prior to the January Rolex Legends event, he drove the fastback through the same corners in day and night sessions at the HSR Classic 24 at Daytona. He even had some wheel-to-door contact then with legendary driver Derek Bell, who was driving the ‘84 Lowenbrau Porsche 944, as he had in period Showroom Stock events. The Porsche still had that circular imprint on its driver’s door at January’s Rolex Legends! 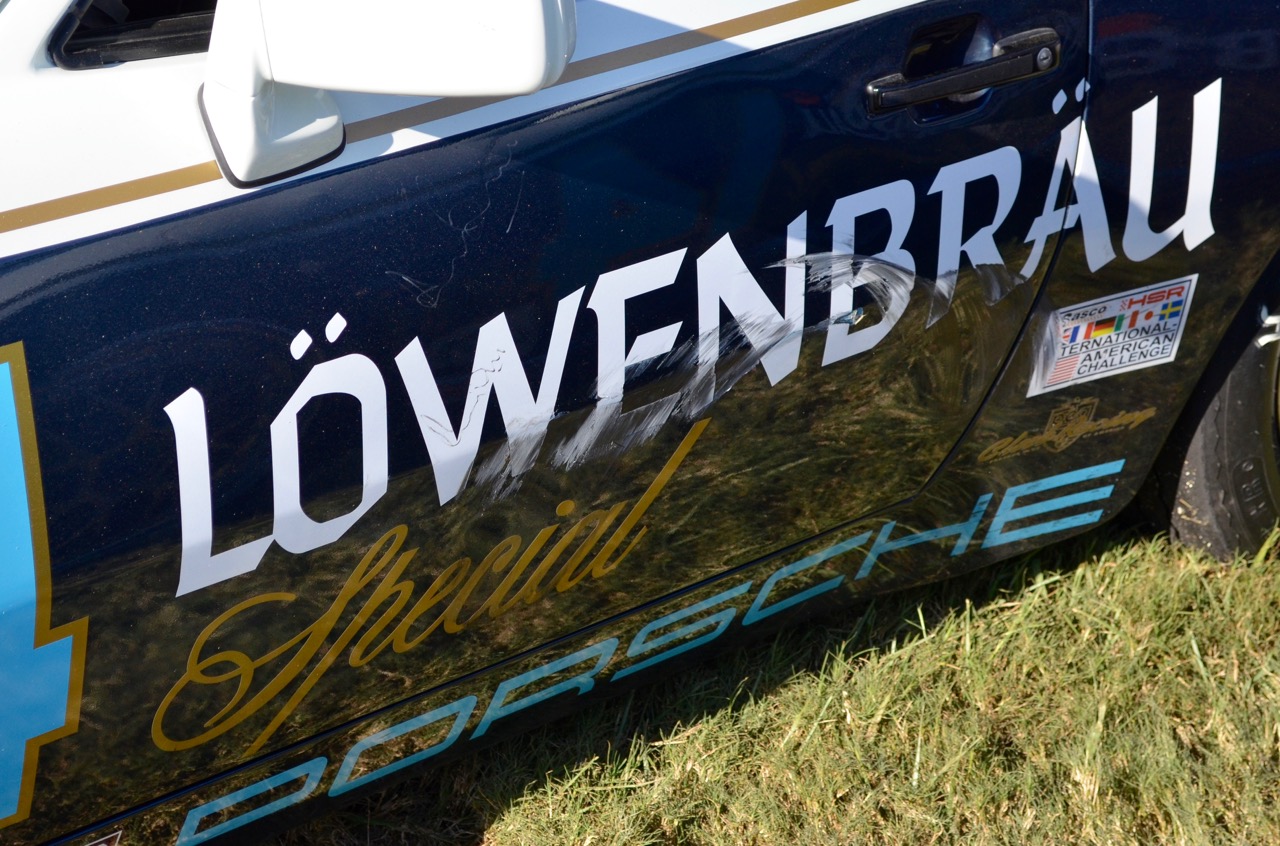 “The cars gave each other a little kiss. That happens. That’s racing,” Stennes said. “I don’t know if he wants me to sign it or not, but it’s a nice little memento.”

So it’s obvious that unlike some trailer queen, Stennes’ ROAD & TRACK: SHELBY GT350 MUSTANG gets used. Maybe even dented and fixed, with a serious lived-in racing feel. In fact, it was already a used racecar when his father, SCCA and vintage racer Gordon Stennes, acquired it in 1978. The younger Stennes drove this ‘65 Shelby GT350 as school transport. Then it became a racecar (again), as it did before Darek’s family bought it. 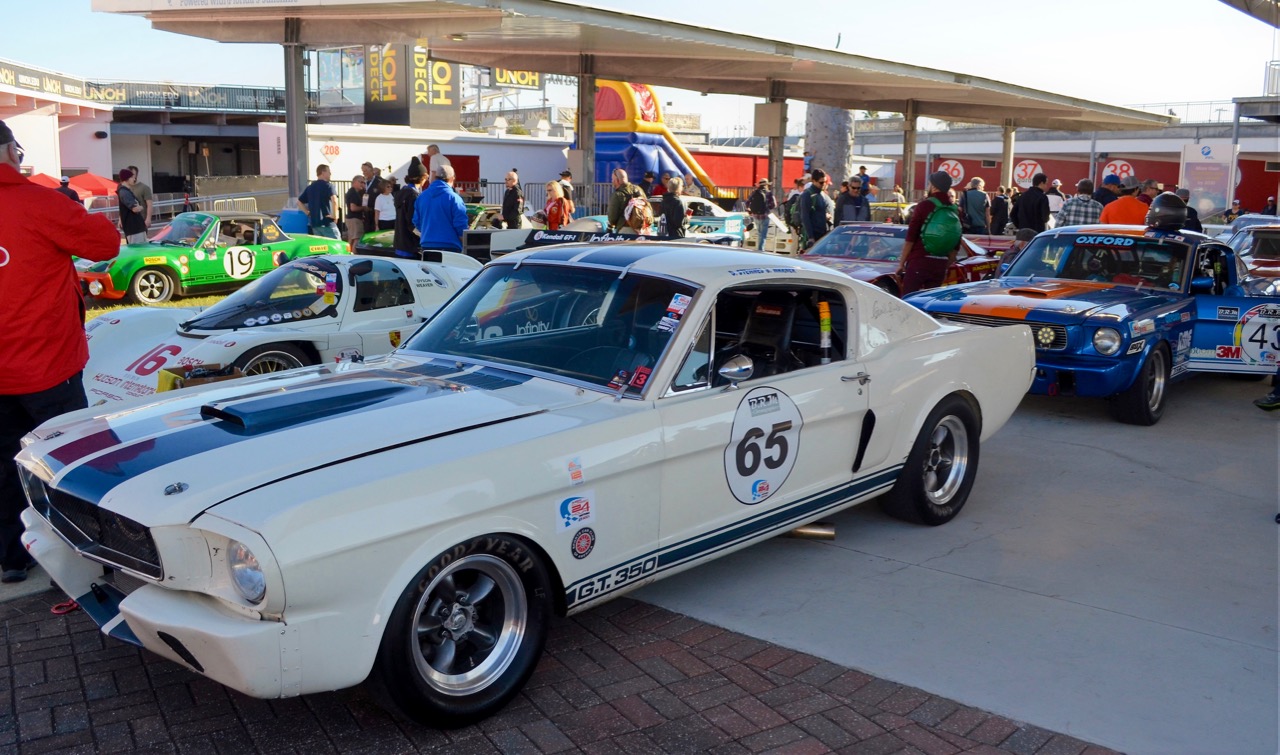 So what do you see when you check out this racecar in the Fan Zone at Daytona during the Rolex weekend? Fans couldn’t miss the real Carroll Shelby autographs, one on its driver’s-side rear window cover, the other scrawled on the dash where its glove box door would have been. And with the recent release of Ford v Ferrari, this Shelby GT350 Mustang got lots of looks.

“Let people see it rather than have it in a museum or a collection. If people see it, it keeps the fire burning, especially with the movie out, so it’s good,” he said. “A lot of people are noticing his signature there, which is about 30 years old. He drove it. He sat in the car when he signed that. He also signed the dashboard in 1992, before his heart transplant. So he stayed in the car the entire day and drove it around Road Atlanta.”

This classic ROAD & TRACK: SHELBY GT350 MUSTANG started life as a basic white fastback at Ford’s San Jose, CA Assembly Plant, and then was modified at the Shelby operation. Mustangs were supplied to Shelby as stripped or KD (knock-down) models. Originally 1 of 522 “S” street models, a previous owner saw it converted in 1970 to 350R specs and raced at Daytona, Sebring and elsewhere before Stennes’ father took it over in 1978 and it entered its next phase of life as sometime street car, then vintage racer. 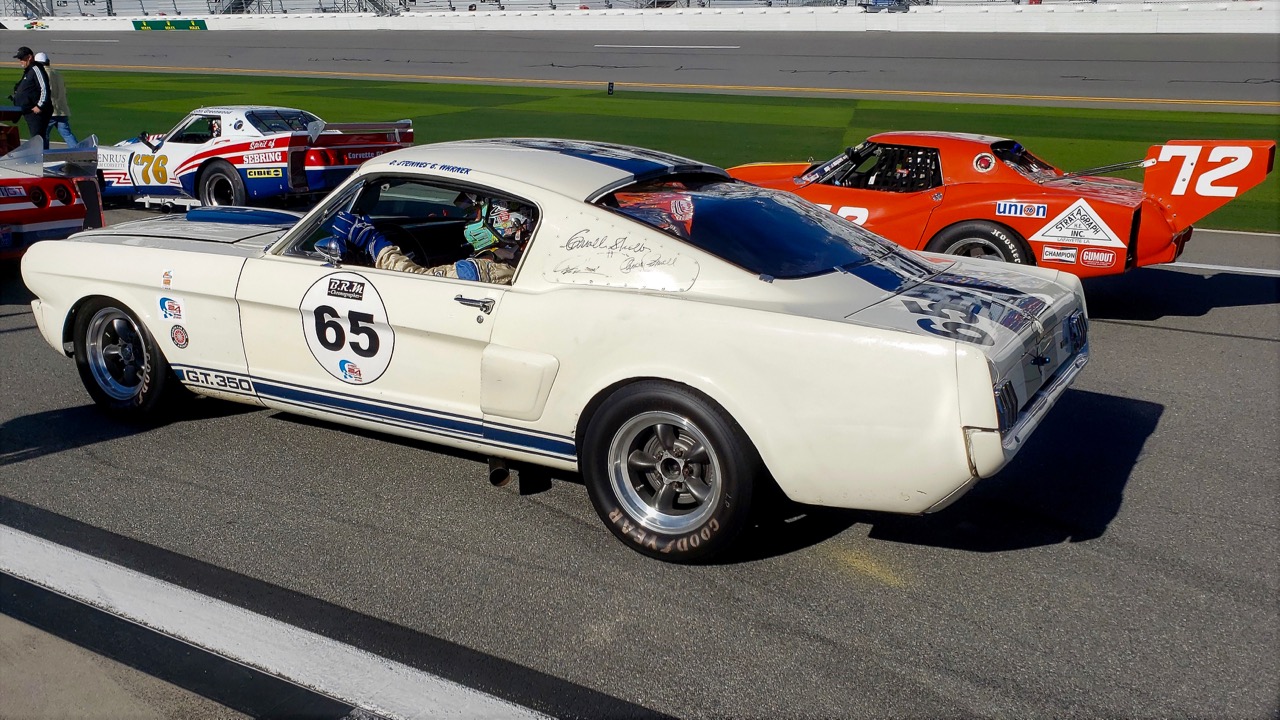 Officially called the Ford Shelby American Mustang GT350 with the 2+2 fastback body, many body panels are stock Mustang, including six-cylinder-model fenders. Shelby conversion components include a scooped fiberglass hood and a front end with deep lower nose intake with air dam-like lip. Wide Goodyear racing rubber lives on five-spoke wheels under flared fenders. The fastback window is lightweight Plexi, held in place with steel tabs. Its upper section dips under the roof for inside airflow. And that striped rear bumper is in body-color. 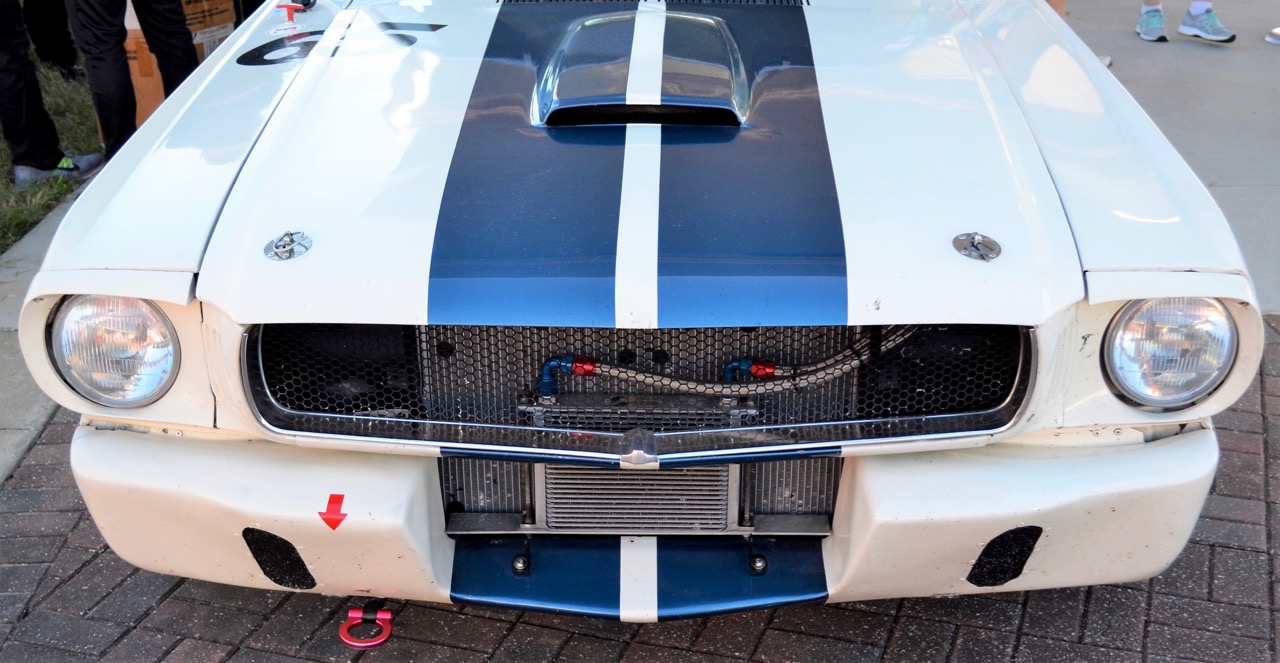 Inside, the basic straight steel dash-top with radio speaker grille is intact, with a lower roll cage tube. In between, a black crackle finish-painted dash panel with 8,000-rpm tach and 160-mph speedometer, flanked with auxiliary gauges. Note the red fire extinguisher release and a steel block-off plate with Shelby’s signature that mimics that glove box door. 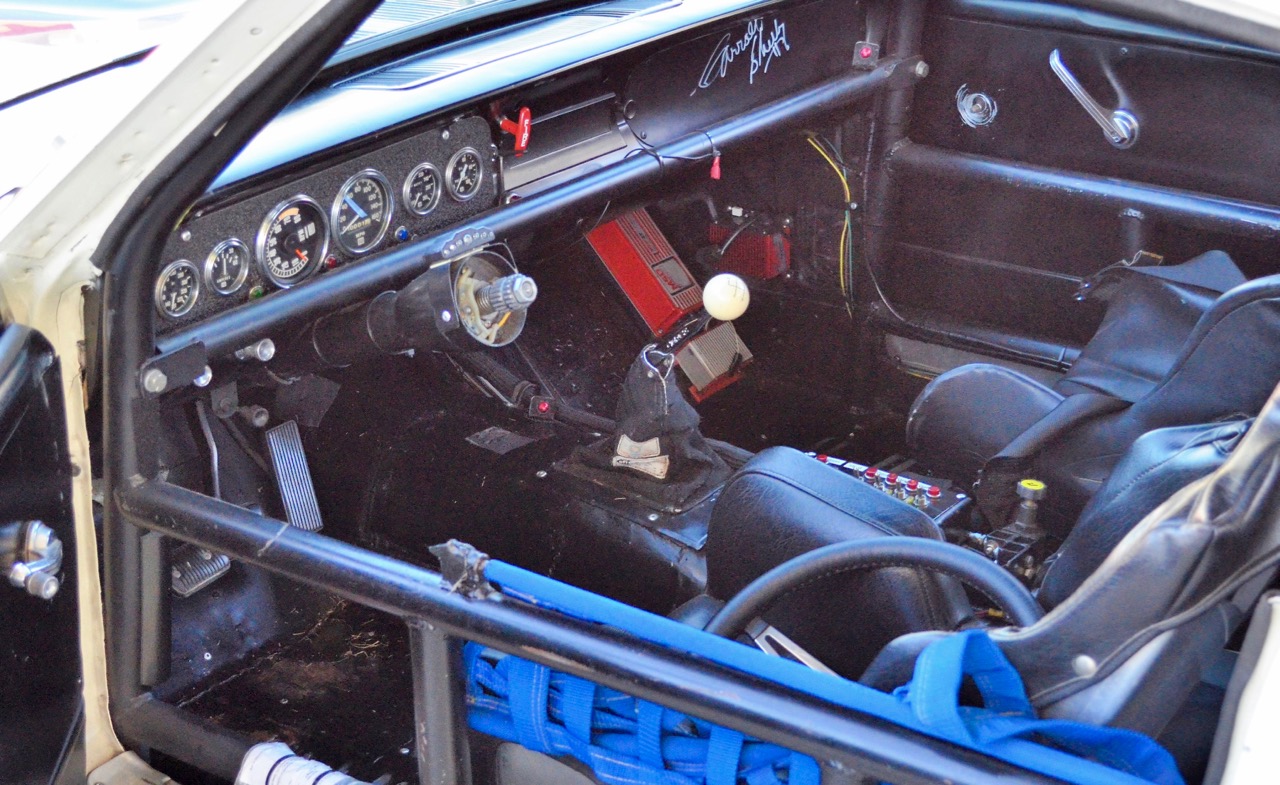 To get in, slide over the roll cage’s side protection and drop into a padded lightweight seat with classic white ball shift knob falling right to hand ahead of important switches. The doors are painted black metal and that’s it bar the driver’s-side safety net. Straight ahead, a classic thick-rimmed, quick-release steering wheel. 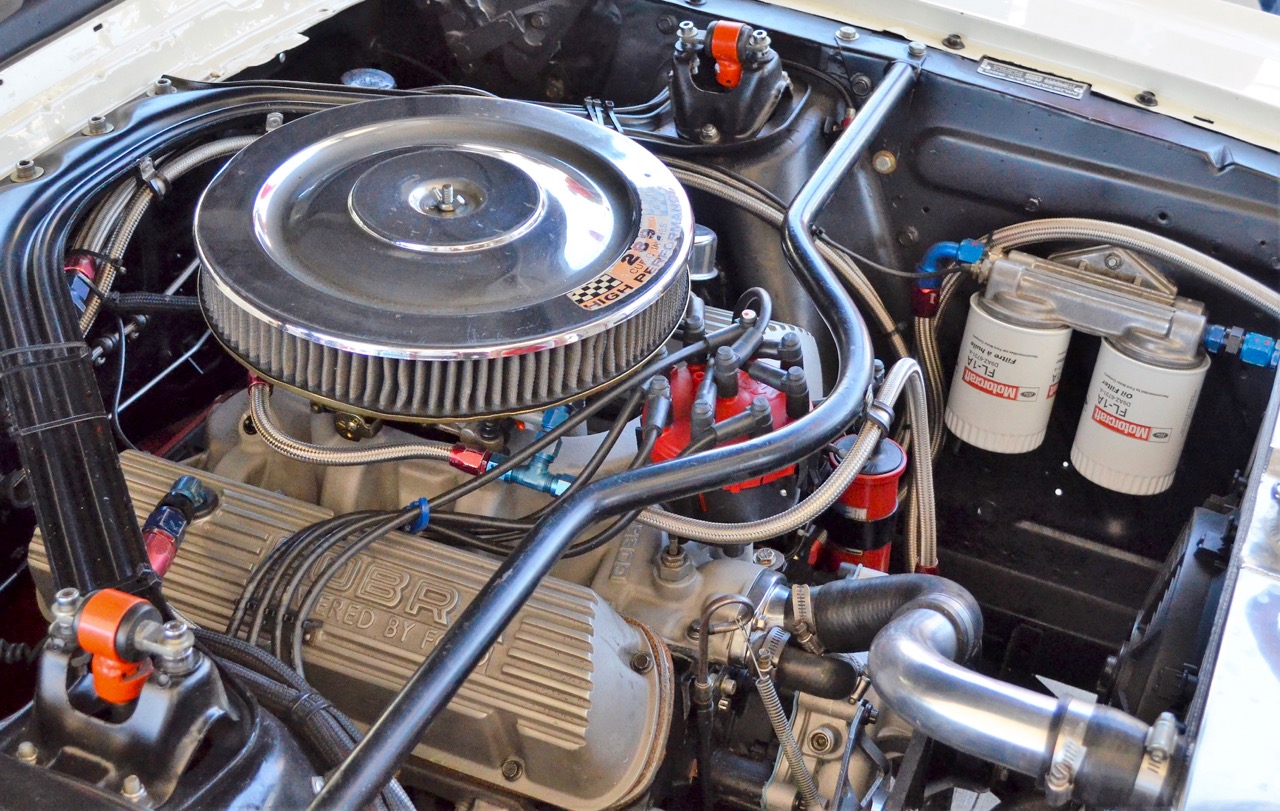 “It will hit 180 at Daytona, but that’s kinda scary,” Stennes admits. The rest of the car is mostly period correct, he said, with original type suspension and brakes, plus roll cage, fuel cell, trunk-mounted battery and fire system. The engine retains that period look as well, its original 289/271 high-performance engine sticker on the air cleaner, finned COBRA valve covers and a cross brace. There’s also a stronger gearbox. And along with the simple blue double stripes down its center, classic G.T.350 sill stripes and a No. 65 livery are on the doors, in deference to its birth year. 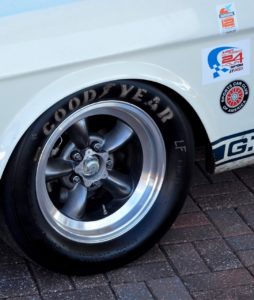 Stennes still actively campaigns his Mustang in vintage events, like co-driving with Amelia Island Concours d’Elegance founder/chairman Bill Warner in the 2018 HSR event at Daytona. In fact, Stennes’ father raced that Shelby against Warner years ago!

The car has a flat, straight pipe rumble at idle, fired up for hundreds of fans after it was pushed out into the pits for its Rolex Legends ride. It’s a tight and compact shape, oozing power from its side exhaust as it sat on the legendary pit lane, surrounded by racing history like three wide-body Greenwood Corvettes, Porsches, Mazdas and a Porsche 962 in the lead. Then it snarled onto the track, leaving that blue and orange GT350 Mustang and others in its wake. 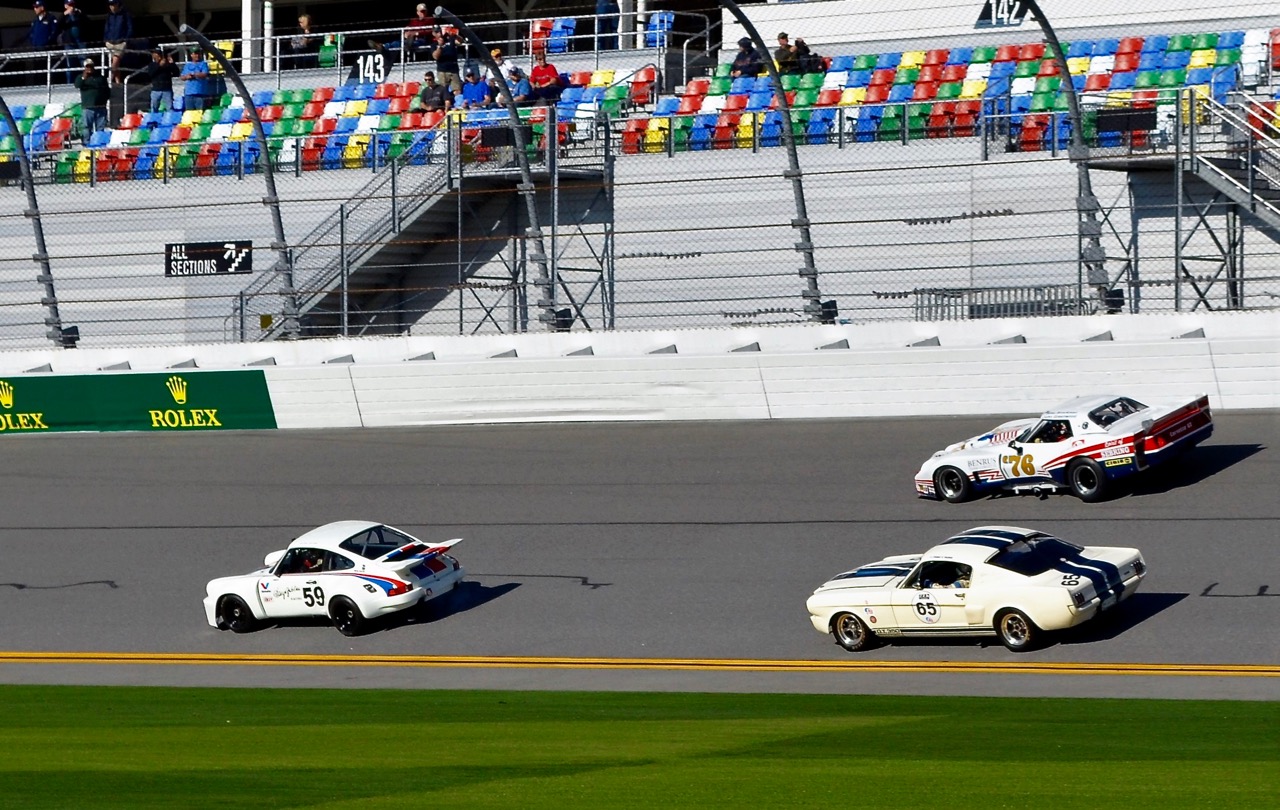 Stennes said he got it to 170-mph on the famed super-speedway during the Rolex Legends, and it easily held its own, including pacing, and passing a 600-horsepower 911 GT1/96. Along with having known Shelby himself, Stennes said he’s seen Ford v Ferrari, which just won Oscars for Best Film Editing, and Best Sound Editing. He said it’s fun to be driving a piece of history with direct connections to what’s in the film. 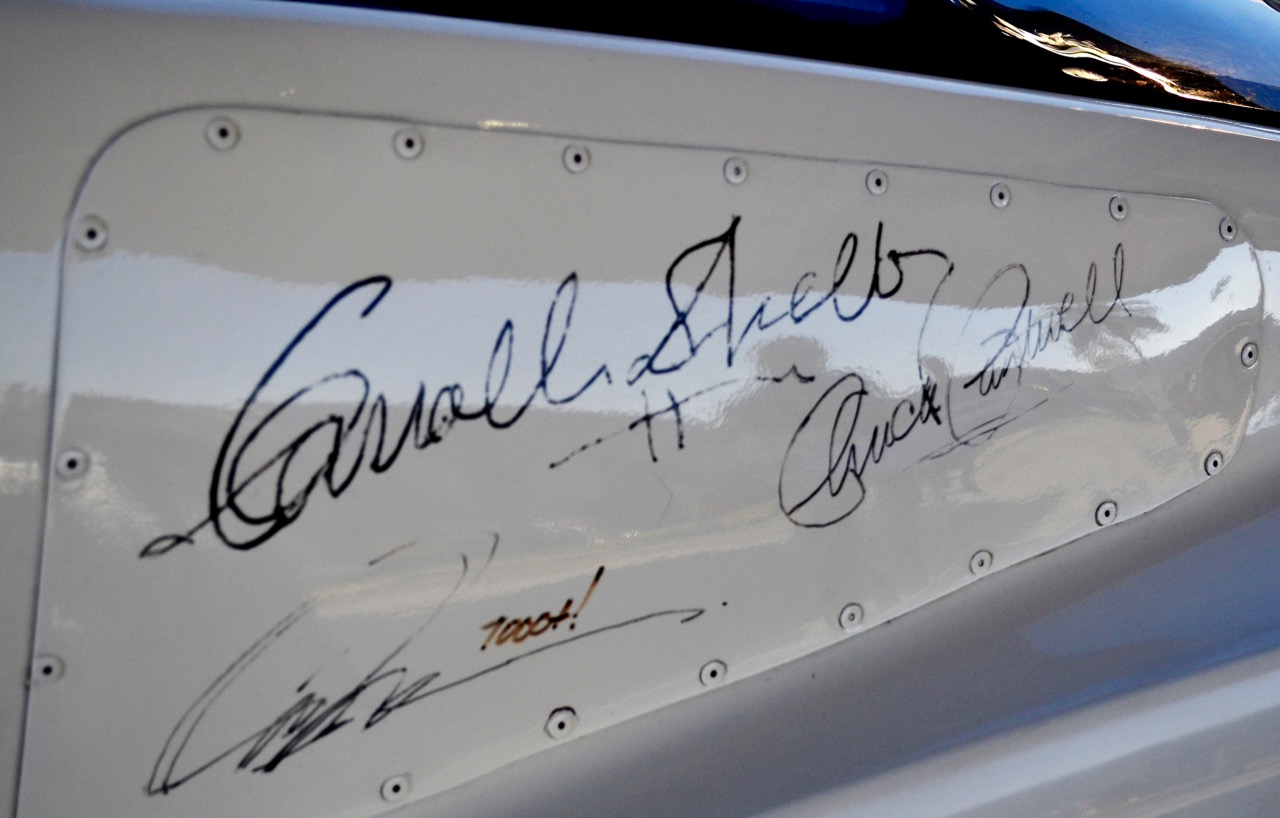 “I know most of the guys portrayed in the movie like Peter Brock and Chuck Cantwell (Shelby GT350R chief engineer) and I even knew Shelby quite well,” Stennes said. “A lot of it’s accurate. A lot of it’s not really so accurate. But once you get past that, it’s a good movie. It’s a Hollywood take on what happened.”