The Matunes – Maureen & Mike – were on the field of 100 antiques, classics and sports cars to bring us highlights of one of the country’s top Concours. 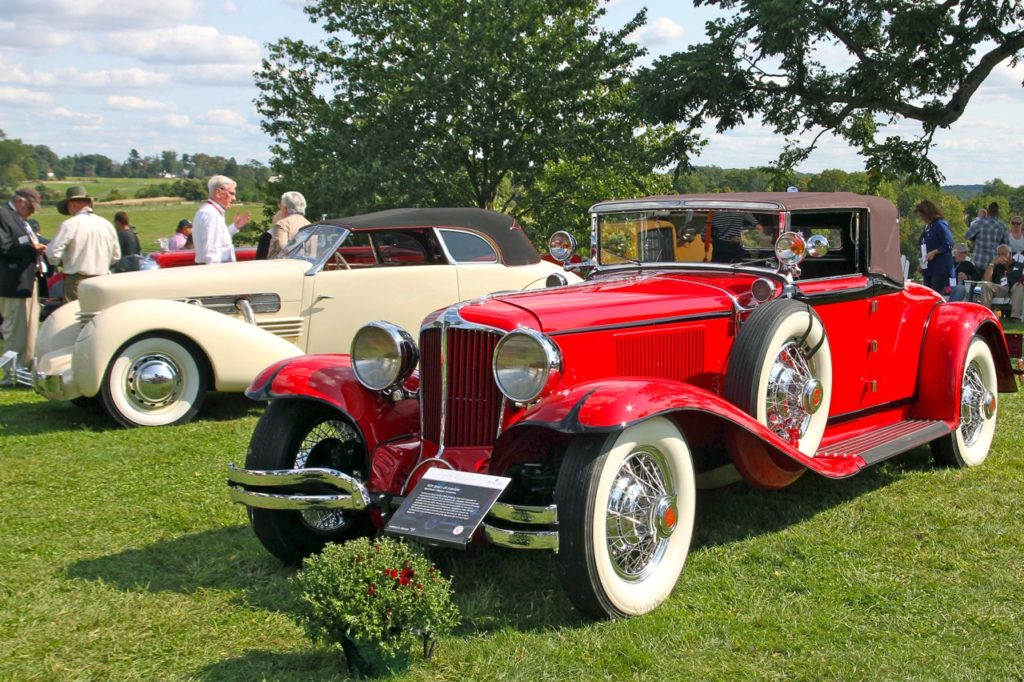 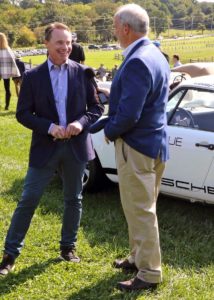 The Radnor Hunt Concours d’Elegance limits itself to 100 motorcars each year while recognizing automotive legends. This year four were honored including Auburn-Cord-Duesenberg. Exemplifying those once mighty marques were Dave Markel’s ‘31 Cord L-29 Cabriolet and Sue & Mark Lankford’s ‘37 Cord 812SC Phaeton.

Team Penske’s ‘73 Porsche 911 RSR was a major attraction. These cars were featured in the first IROC Championship, taken by Mark Donohue. This very car would carry him to a Riverside win. Standing next to the car speaking to a television journalist is Mark’s son David. He is a racer of note in his own right, having both a North American Touring Car Championship and a class win at Le Mans to his credit. 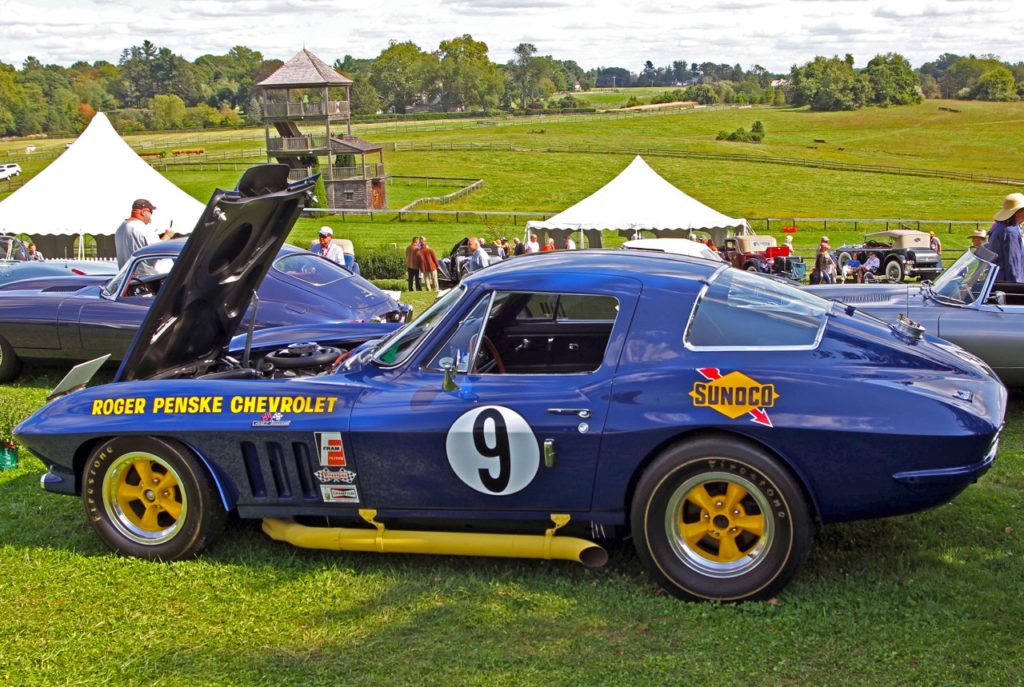 The Race Cars of Roger Penske were featured at this year’s event. Among them was this ‘66 Chevrolet Corvette L88 coupe owned by Kevin Mackay. It’s too bad this car can’t talk. It could tell stories about a cold drive back from the Corvette plant in St. Louis to the Penske shop and then to Corvette legend Dick Guldstrand. Or about completing the Daytona 24 and taking a class win with flashlights taped to the hood replacing crash-damaged headlights! 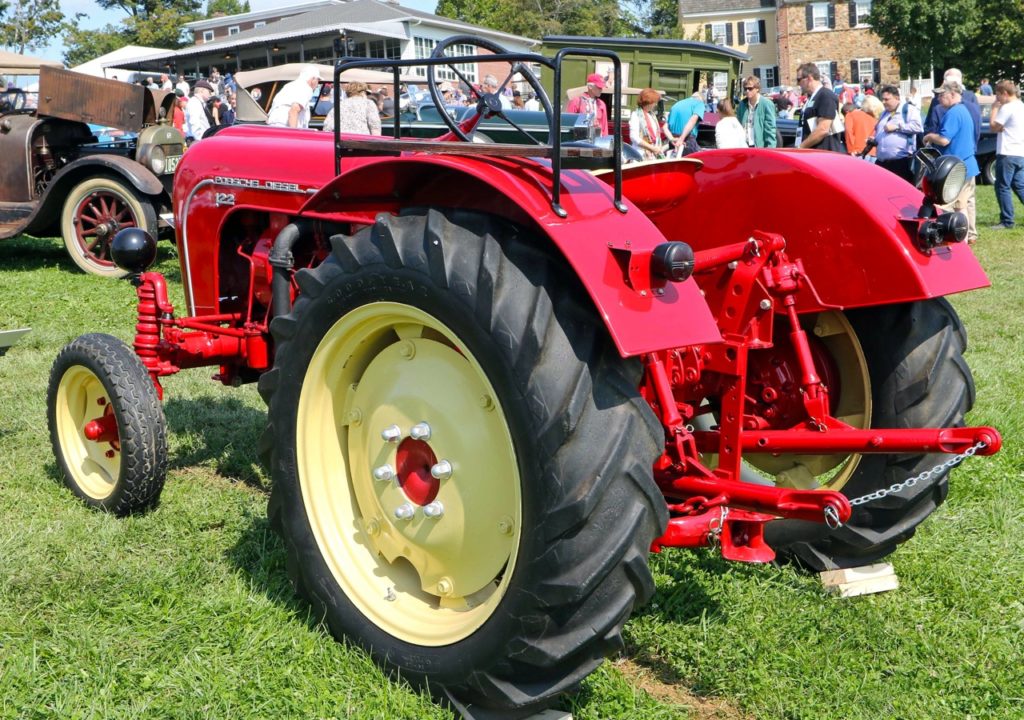 Purists were appalled a few years back when perennial sportscar manufacturer Porsche, added SUVs and a sedan to its lineup. They may have been ignoring a little history, as Porsche once made tractors in addition to their more sporty offerings. Production was started before WWII and continued afterwards by manufacturers who leased the rights to the design. Radnor Hunt had a special class this year for vintage tractors and Daniel Magness brought his Porsche along. 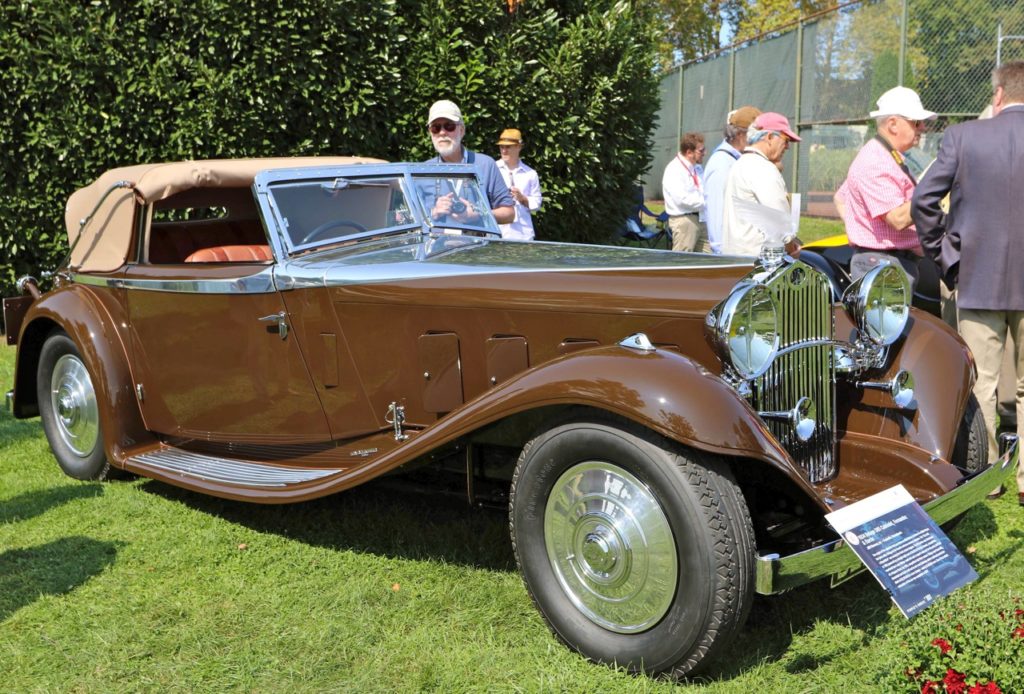 From another time, comes the Delage sales slogan, the “Car with a Reputation”. The origins of that were supposedly in the saying that a Delage was the car you gave to your mistress. The lines of this ‘34 D8S Cabriolet with body by Fernandez & Daren certainly convey a sultry theme. Today it holds a place in the JWR Museum collection. Its past accolades include class awards on two occasions at Pebble Beach. 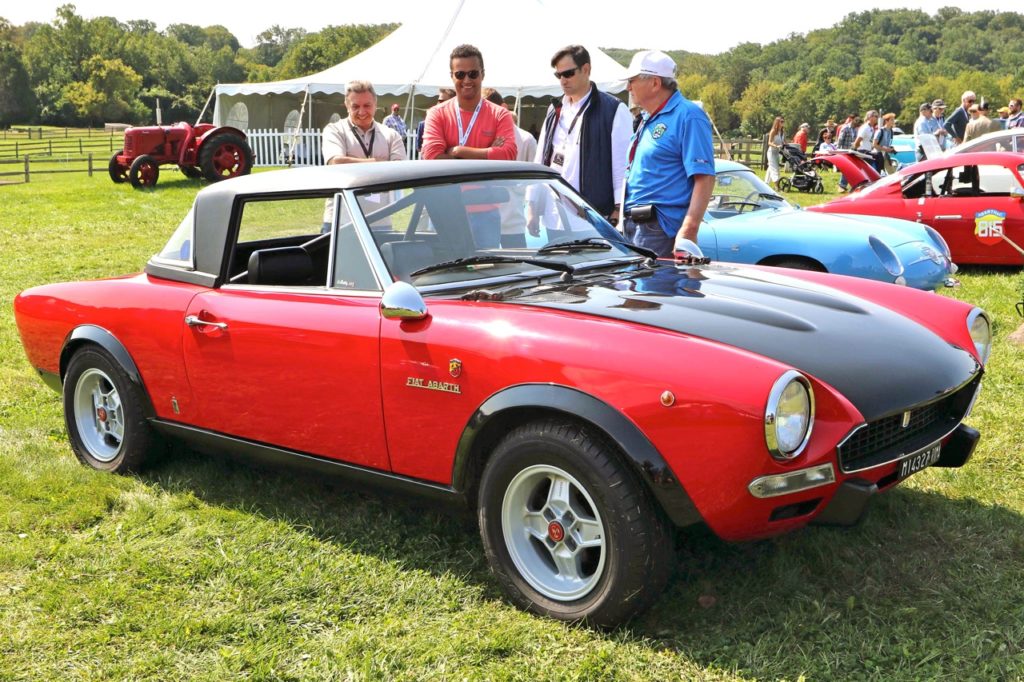 Fiat has unleashed a modern version of the legendary 124 Spyder Abarth and this is the car which inspired it – Gildo Torchia’s rare ‘73 Fiat 124 CSA Abarth. Conceived and built as a Homologation Special to qualify for Group 4 rally competition, it features an IRS, fiberglass hood and decklid and aluminum doors. Those wheels are real magnesium as opposed to aluminum. Under its hood is a slightly hotter version of Fiat’s DOHC Four. 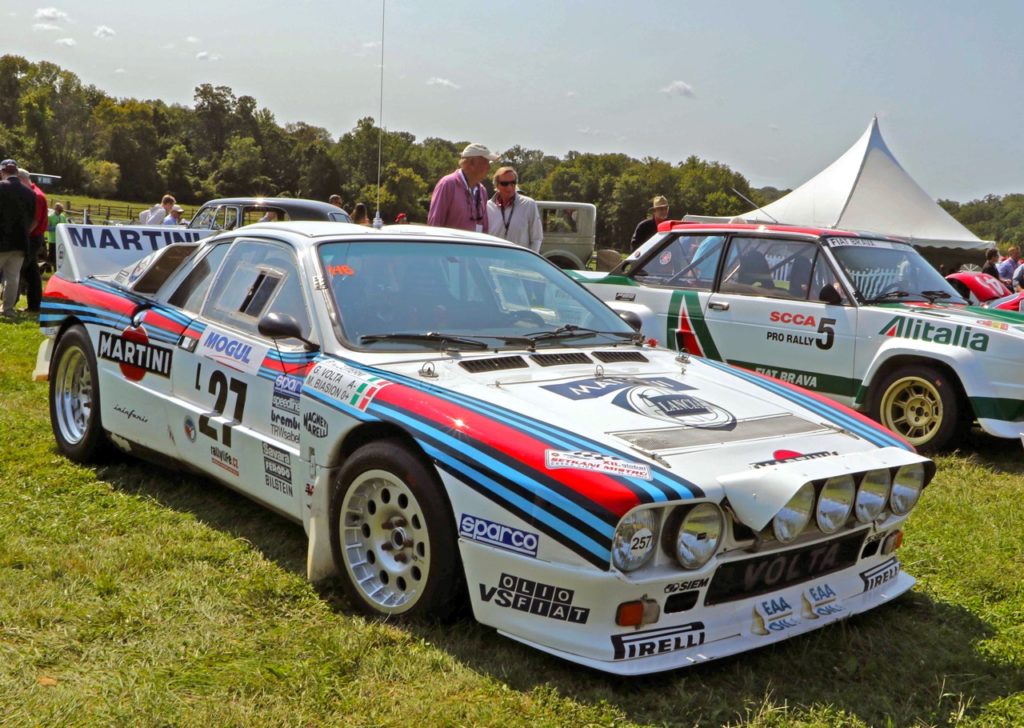 Suzanne and John Campion traveled from Jacksonville, FL to show their ‘83 Lancia-Abarth 037 rally car. It has scored multiple wins and podiums in its life. Found in Prague, it is now safely ensconced in the Campion’s extensive collection of pro rally cars. Their trip to Radnor Hunt was rewarded with the Best of Show Sport trophy. 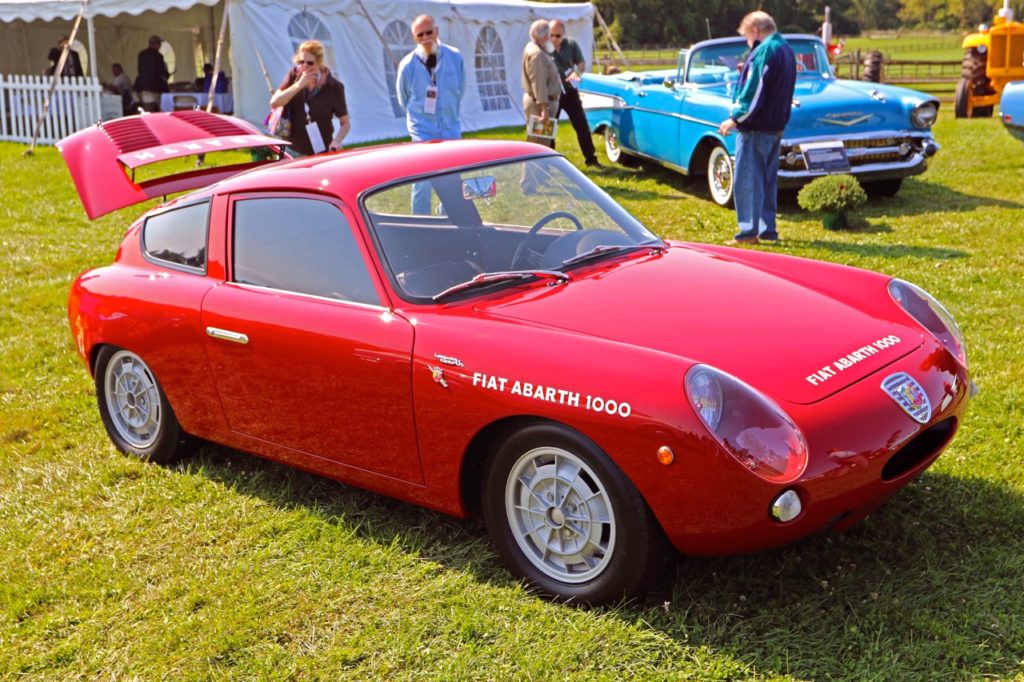 Diane & Don Meluzio showed their ‘61 Fiat Abarth Bialbero 1000 GT Coupe with body by Carrozzeria Abarth & Beccarris as part of a special Fiat Abarth class. After a successful racing career in Europe this car was sold to Team Roosevelt in the U.S. and continued its winning ways at Nassau and Sebring. As with most Abarths, the engine is diminutive but powerful, drawing 95 horsepower from 948 ccs. The Meluzios are to be congratulated for organizing the outstanding Abarth class. 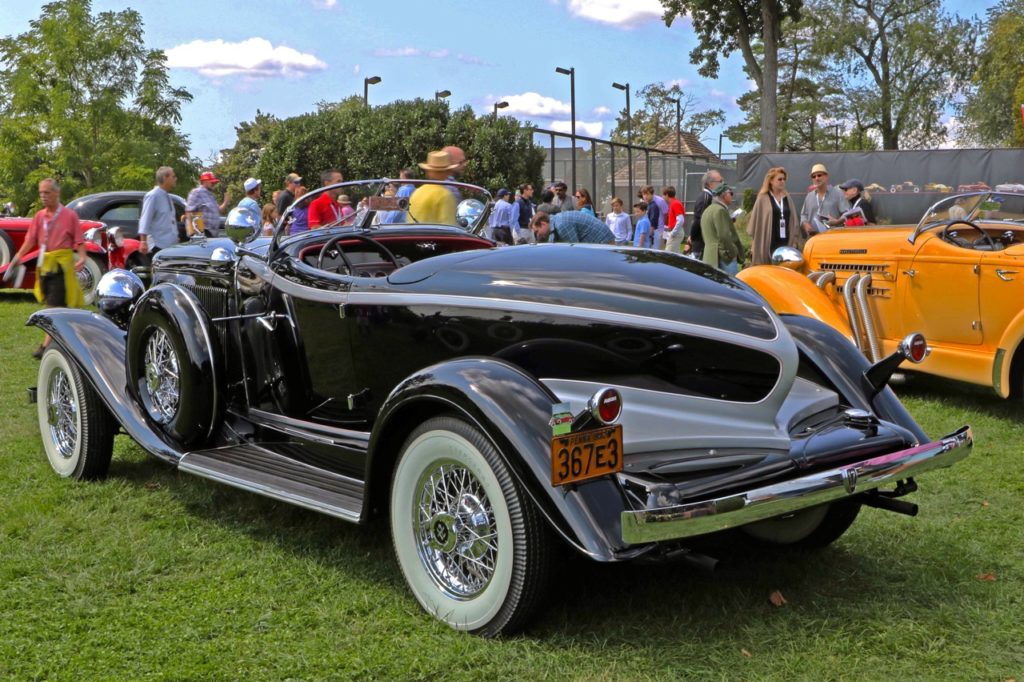 It’s hard to find a bad angle on David Markel’s ‘32 Auburn 12-160A Speedster. From this view, your eye is drawn to the boat-tail styling, wide-whites, wire wheels and flawless paint. The Speedster houses a 160 horsepower, 391 cubic-inch, Twelve and a two-speed rear axle. Top speed is in the range of 110 mph. 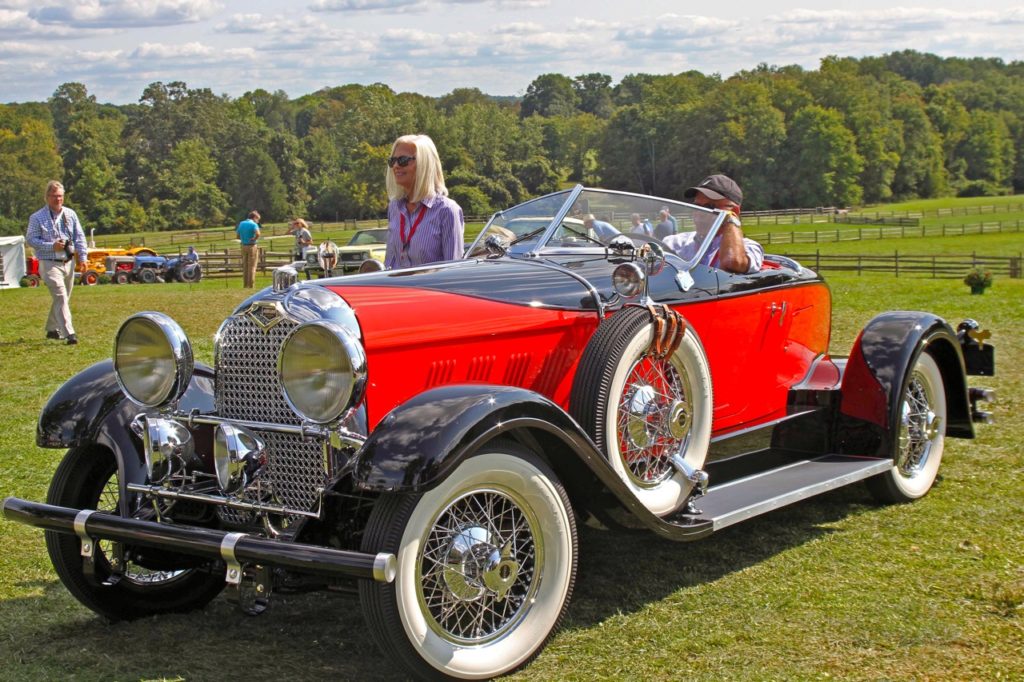 Helen & Richard Harding wait patiently for their turn at the awards podium in their ‘28 Auburn 8-988 Speedster. Their stunning Navajo Red and Black car garnered the Best in Show award at the 21st Radnor Hunt Concours. The Auburn marque dates back to the turn of the 20th Century, later becoming part of Auburn – Cord – Duesenberg. 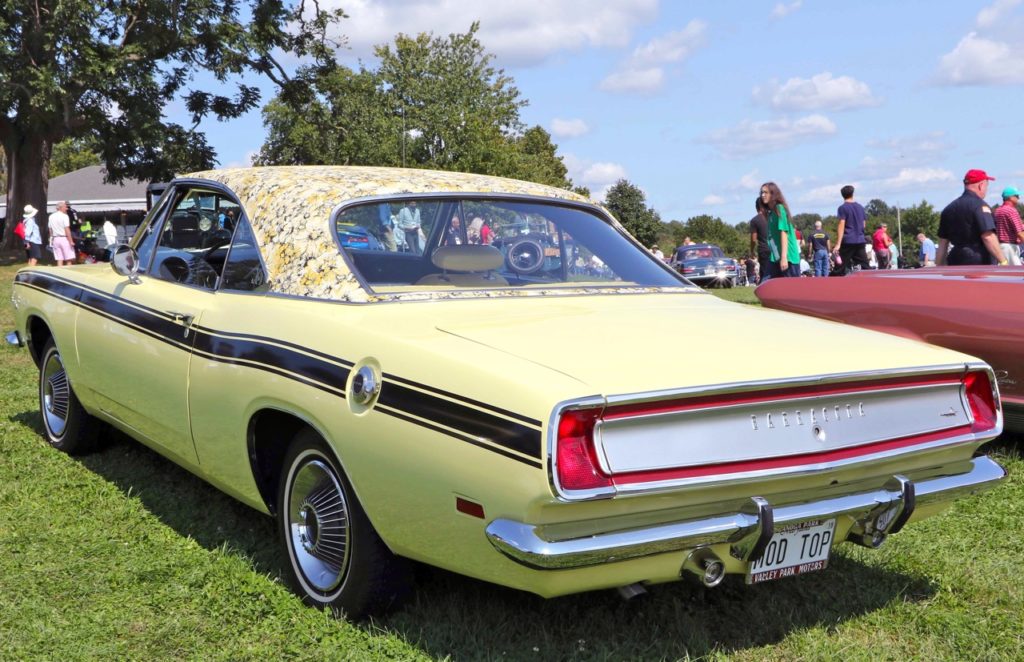 Chrysler was known for a little craziness during the Ponycar-Musclecar era as shown by Kim Barnes ‘69 Plymouth Barracuda “Mod Top” coupe. One’s eye is immediately drawn to the flower power vinyl roof until you notice the interior is upholstered in a similar pattern. Obviously, this was not for the shy or retiring, as borne out by the fact that only about 900 of these were made in 1969.

Thanks to Mike Whelan for his help with credentials. And to Founder & Chairman Mike Tillson, his staff, sponsors, presenters, judges, participants and volunteers for another great Concours.

For more information about the event and its venue, please visit https://radnorconcours.org/