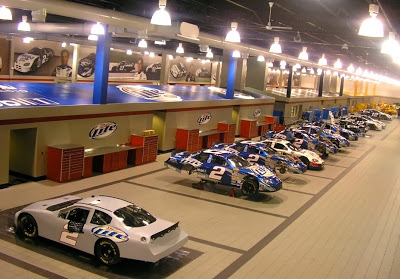 Think for a moment about the most famous upsets in sports history.

The New York Giants beat undefeated New England in Super Bowl XLII. Buster Douglas knocked out Mike Tyson in Tokyo, February 1990. The U.S. Olympic hockey team manhandled the supposedly unbeatable Russians in 1980. Every year the major sports magazines print lists of the greatest upsets in sports history, and every year they all have one thing in common… they are pretty much “stick-and-ball” sports. So where are the great upsets in motor racing?
Off the top of my head, I can think of only three!

Olivier Panis was a 300-to-1 underdog at Monaco in 1996. Had it not been for the rain, he would have had no chance at all. The following year, Jim Guthrie held off Tony Stewart at Indycar’s Phoenix 200 for one of the few truly jaw-dropping moments in motorsports history. And it could be said that Trevor Bayne’s win at Daytona in 2011 was largely unexpected, even though he was driving for one of the sport’s legendary teams.

I’m sure there are more and we could debate the topic to infinity. But the point is that every other sport has oodles of wacky upsets, but auto racing has precious few. Why? Because money wins! Of course, spending money doesn’t absolutely guarantee that you will win races. But failing to spend money virtually assures that you won’t. Penske Racing Hq., above.

I wish someone had told me that when I first started racing. I spent years stretching my budget (or my sponsors’ budgets) to race one or two levels higher than the available dollars dictated, which only permitted second-rate rides and mediocre results. Worse yet, it shattered my confidence as a driver and left the team starving for money between races. There was never quite enough cash for that extra set of tires or the equipment we really needed. An extra hotel night was out of the question. Testing was not possible. 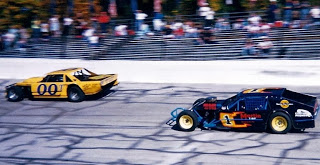 Everything came to a boiling point in 1998 when I was driving an underpowered, six-year-old open wheel Modified in a major Midwestern touring series at places like Winchester and Salem, #1 Right,. If you haven’t driven an open wheel Modified on 36-degree banking, let me assure you that
it is a life-altering experience. These cars
are insanely fast.

No fewer than 83 of the top teams in the central USA ran this series. I was racing against veterans like Jeff Lane, Rodney Scott, Joe Beaver and L. J. Lines. These guys were studs. They were the Midwestern short track heroes. They had top equipment, good budgets and were top-notch shoes. They simply ran over me. My team finished the season with no wins,
no poles, a single top 5 and only two top 10s. I was fed up, but as a first-generation
racer I had no one to teach me anything.

In the spring of 1999, I decided I would try throwing money at the problem just to see what would happen. We switched to a new series of full-bodied, V8-powered late-models that ran top tracks but was still within our budget. I signed two sponsors and put in extra cash out of my own pocket to fund everything properly. The results were astonishing. 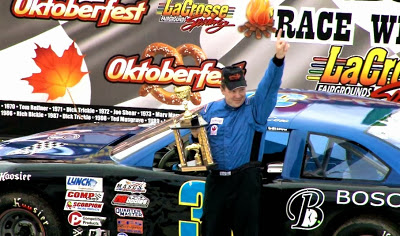 By season’s end we had scored our first win at Indianapolis Raceway Park (now Lucas Oil Raceway), one of the finest short track facilities in the nation. We’d also earned a pair of pole-positions, a dozen top 5s and 20 top 10s. We were a front-running team and a legitimate threat every night. What changed? I was the same driver doing the same job. The only difference was budget. I learned my lesson well and have won races ever since, above.

So here is a short quiz: What teams have won the last five Sprint Cup titles? Roger Penske, Stewart-Haas and Rick Hendrick. Who took the last five Indycar championships? Chip Ganassi. The top all-time Indycar winners? Penske and Newman-Haas. News flash. There are no underdogs on those lists.

If you are a young driver and you want to succeed in this industry, be smarter than I was. Spend whatever it takes. If you can’t spend more, raise the money. If you can’t raise the money, lower the level at which you compete. Don’t think that you can come into a race series on a partial budget and stun the world. It’s hard enough to win even with a proper budget.

There really aren’t that many upsets in auto racing!