Skip to content
Stephen Cox blogs about the most iconic of the thundering Turbo Porsche 917s.   Part VII: The Legacy.

“In two of the races – Atlanta and Elkhart Lake – the car lapped the entire field. That’s doing something. This was an unbelievable car.” – Chief mechanic John “Woody” Woodard.

Porsche enjoyed a dominance in 1972 that McLaren could only dream of. McLaren’s five-year stranglehold had been crushed, and Porsche had earned their first Can-Am Challenge Cup.

But many years passed before the participants discovered the full impact of their efforts. The L&M Porsche has become one of the most recognizable racecars in history. Aurora AFX produced an HO scale slot car version of the L&M Porsche at the height of the hobby’s popularity. Tens of thousands of kids got to drive the L&M Porsche on miniature road courses worldwide. Even more than 40 years after the team’s finest hour, Ratcliffe models still offer a 1/87th scale resin cast model kit of the L&M Porsche. Lunch boxes, T-shirts and posters featured the L&M Porsche. It appeared in books and magazines and influenced pop culture as much as any racecar since the Marmon Wasp.

Everyone who saw the car in person remembered its thunderous roar. Photographer Pete Lyons, who covered the Can-Am series in 1972, said, “You had the sensation that something momentous had just gone by. You could feel the blast coming out of the exhaust; ground trembling under your feet.”

The power and beauty of the Can-Am series faded from the racing scene within a few short years. Many believe it never truly returned in the proliferation of road racing series that have come and gone since, and perhaps never will. 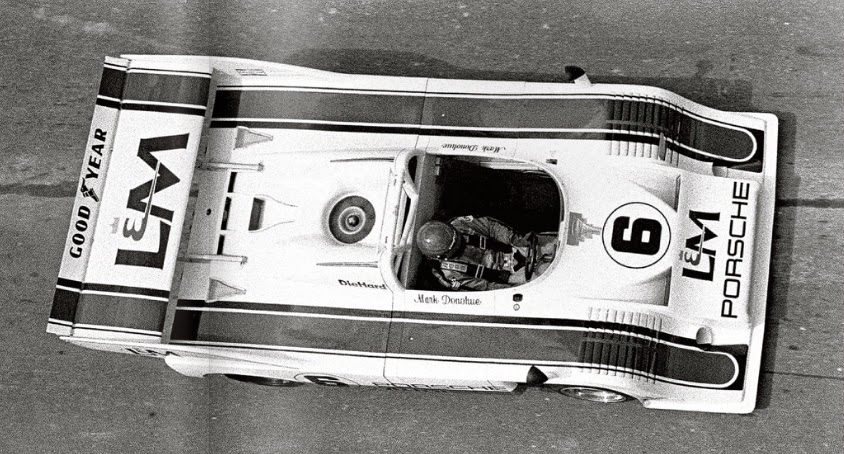 “There were times when Mark, George, Bruce, Denny and Lothar… they were all sitting on the wall waiting to see the last [lap] time because if anybody beat their time they wanted to go back out and get it again. It was that way at every track.

It was just different back then. People would get together away from the track and go out to dinner at night in smaller groups. All I can say is that it was a friendlier, more lovable community.”

The Can-Am cars were the last of their kind. A lot of things have changed now. It’s all big business, big money, and motor homes. But those were the best days ever in racing.

In the late-1970s, the world’s auto racing landscape was changing rapidly from a wide-open formula to a heavily restricted class structure, and the handwriting was on the wall for the mighty 917/10.

Both of Penske’s surviving Porsches, serial numbers 003 and 005, were sold to Rinzler Racing for the 1973 season. Sporting their new RC Cola livery, the cars returned to competition in the hands of George Follmer and Charlie Kemp. 917/10-003 was raced in Europe in early 1973. It returned to North America in June to join 917/10-005 and run the full Can-Am series.

The 917/10’s were never again as dominant as they had been in 1972. Still, the only car that could consistently defeat them was Mark Donohue’s new Porsche 917/30. By the mid-1970s, the two Porsches had gone their separate ways. 917/10-005 was quickly re-acquired by its manufacturer. It still exists today, on display in the Porsche Museum.

After a series of ownership changes, collector Rusty West purchased the original L&M Porsche 917/10-003 shortly after the turn of the 21st century. The car arrived at his garage “covered with an inch of dust.” West immediately began a quick clean-up effort so that the car could be preserved.

The original L&M Porsche is in driving condition today and was most recently driven during a vintage-racing event at the same Laguna Seca road course where it clinched the Can-Am Challenge Cup 40 years before.

The L&M Porsche remains a living testament to the glory years of Can-Am racing. It is still the headline attraction anywhere it appears, and even those who weren’t there to see it in 1972 instantly recognize it as an icon of motorsports history. 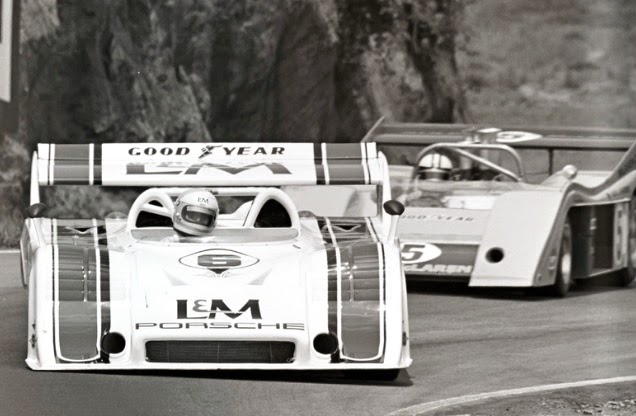 Mark Donohue, the man whose vision brought the 917/10 to Can-Am and who should have won the title in it in 1972, continued to have his star burn brightly over the next year as he dominated the series and won the title that had eluded him. He then promptly retired from auto racing.

Lured out of retirement by the promise of a new Formula 1 team in 1974, Donohue returned to motorsports to win the first IROC crown and set a new closed course speed record at Talladega. Driving for Roger Penske at the 1975 Austrian Grand Prix, Donohue suffered a serious crash during practice. He fell into a coma the following day and died shortly thereafter.

George Follmer become one of the most sought-after racing drivers of the 1970s, competing in Formula 1, Indycars and the NASCAR Winston Cup series. Today he lives in retirement in Idaho. His complete biography will be published in early 2013.

Porsche engineer Helmut Flegl contributed greatly to the German company’s success over the following years. After a long and successful engineering career he now lives in retirement in Stuttgart. Chief mechanic John “Woody” Woodard was very helpful in the writing of this book. He spent eight years full time with Penske Racing and then continued changing right rear tires on Penske’s Indycars until 1989. His other business pursuits led him to become president of Detroit Diesel Remanufacturing. He retired in 1999 and now lives with his wife on the shores of the Chesapeake Bay in Virginia.

Marilyn Motschenbacher Halder toted a camera everywhere and continued in racing for many years. Today she lives in southern California and has created a series of DVD’s from the home movies she shot at Can-Am races in the late-1960s and early-1970s. They are available at www.FoxyVentures.com

Truck driver Heinz Hofer, who was Roger Penske’s ski instructor in Colorado, stayed with Penske Racing after the 1972 championship season. He became managing director of Penske Racing in England before losing his life in a 1977 traffic accident.

Number 2 mechanic Greg Syfert also stayed with Penske and was eventually absorbed into the team’s Formula 1 effort. After Donohue’s death in 1975, Syfert left the sport to become a schoolteacher in the Detroit area. He passed away in late 2003. As a fitting tribute to the machine and its crew, the two men who had more contact with the L&M Porsche than any other human beings were each asked to reflect on the 1972 season some 40 years later.

I believe their comments are best left unedited for the reader to appreciate. 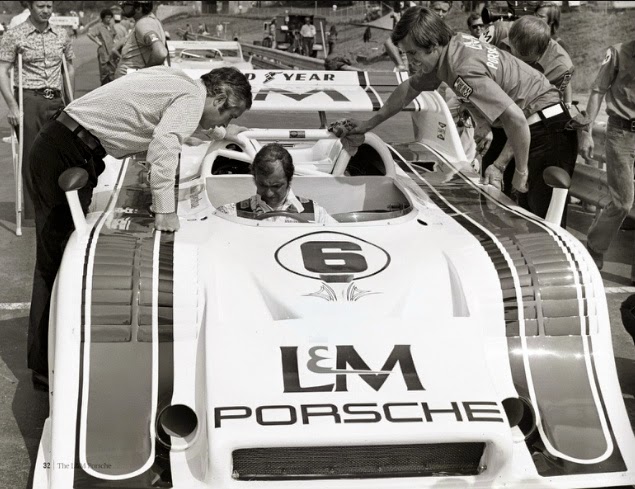 “[The L&M Porsche] will always be special for me. I got very familiar with it. I could do most anything I wanted with it. I could make it go as fast as it could go. I had learned a lot about it.

The 1972 season was kind of memorable because I won the Trans-Am series, too. I think they had seven or eight races and I won five of them. So I had two national road racing championships in the same season. It has never been done since and it had never been done until then. So 1972 was really a banner year.

You don’t see the same camaraderie today. We were always competitors, but me and Mark and Pete Revson, we came up at the same time through the same channels. I was glad to be a part of it. I’m honored to be a part of it. I certainly had a good time doing it. We made it into a success story. It’s always nice to have a story with a happy ending.”

“That particular car is probably one of the most significant racecars in North America today. There were a lot of 917s built by Porsche and there were a fair number of 917 Turbos, 917/10’s and 917/30’s, but there were only five that graced Penske Racing shops. Three in 1972, and two in 1973.

The second car we received was the magnesium car, which was serial number 011. That car was destroyed in Mark’s wreck in Atlanta.

The third chassis we got was serial number 005. That was a replacement for the magnesium car. We got that in the summer of 1972 and Mark raced it a couple of times late in the year. So serial number 003 is the only legitimate Penske 917/10 that exists in North America.

It is the Can-Am winner of 1972. Follmer’s points were almost twice second place. There were nine races in the championship of which it won five. It finished in the top three in seven of the nine races. Whoever gets it… I’d like them to know how special it really is.”

Stephen Cox is a racer and co-host of TV coverage of Mecum Auctions (NBCSN), sponsored by:  http://boschett-timepieces.com/  http://www.mcgunegillengines.com/