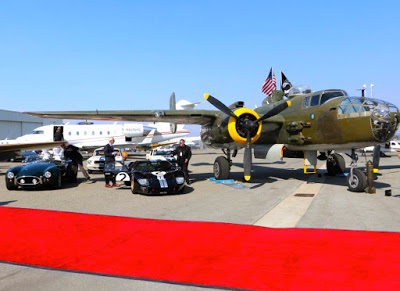 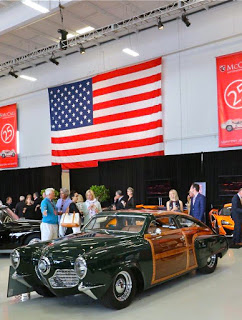 Twenty-five years ago Molly & Gordon McCall invited a few like-minded friends to a gathering of car people to kick off Monterey’s Car Week. Begun as a shop party with a collection of cars, it grew from one hanger to another and then another. Along the way aircraft were incorporated along with the finest in cuisine and spirits. Today Motorworks Revival is still going strong with no signs of slowing. Far more than the original 50-100 guests enjoy a life-style event, all to benefit the California Highway Patrol 11-99 Foundation. This Grand Touring style Studebaker Woody, right, combines the best of many generations of custom cars

This shot, top, represents two distinct periods of American ingenuity and success. The plane is a B-25 bomber which rose from America’s industrial might to help defeat the Axis in WWII. Nestled under its wing is a collection of Shelby and Ford’s finest that took on the racing world in the 1960s and emerged victorious. 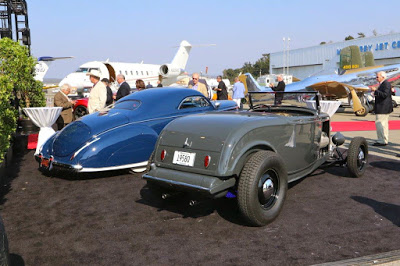 This is what the Revival is all about. In one shot we have a modern corporate aircraft, classic P-51 Mustang, traditional hot rod and a coachbuilt custom. The hot rod incorporates a mixture of pieces from a variety of cars augmented by the speed equipment of the day. The incredible ’40 Mercury Custom is a bespoke piece, blending a number of billet pieces and blurring the line between a fine coachbuilt automobile and a hot rod. New Jersey artisan, Rob Ida, built it. 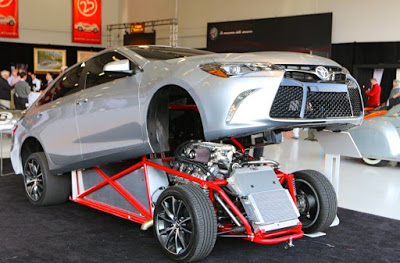 You may have seen this car on an episode of Jay Leno’s Garage when Jay offers to race with Tim Allen and shows up in this beast. Under its flip-top bodywork and riding on stock-looking wheels, the car is a tube frame creation with a blown 5.7-liter Tundra engine and runs in the 9.80s!  9.80 second range. With the body down, it looks like a customized Camry! 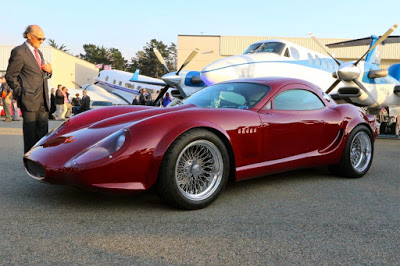 The Sensualé is Nick Soprano’s interpretation of an Italian GT from what he calls the “Golden Age of Motorsports”. It combines elements of the best racers and Grand Tourers of the day, all brought to life with competition-inspired suspension, a custom built frame and a hand built aluminum body. The Ferrari engine and powertrain is set back for enhanced weight distribution. In addition to being shown at the Motorworks Revival, it also made an appearance at the Tour d’Elegance the next day. 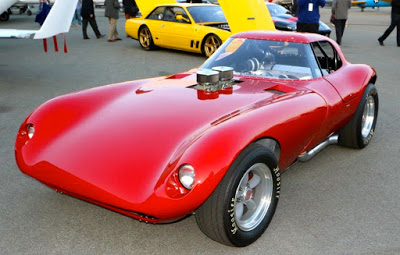 Bill Thomas built the Cheetah to beat Cobras. In Thomas-Cheetah fashion, its engine/transmission unit was moved so far back that it hooks up to a Corvette IRS with a single u-joint. Eventually a fire in the Cheetah factory brought the curtain down on Thomas’ effort. 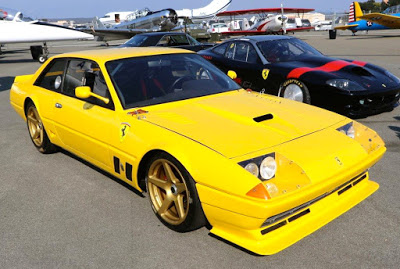 This Ferrari’s 400i has been modified into a track-day racer with bodywork revisions in line with its new purpose. Underneath it features MoTeC fuel-injection, a Tremec transmission and a quick-change rear end. Suspension, wheels and tires are geared to quicker lap times and the whole car has undergone a lightening program. The black Ferrari behind it was just back from Bonneville and still showed its salt stains proudly. 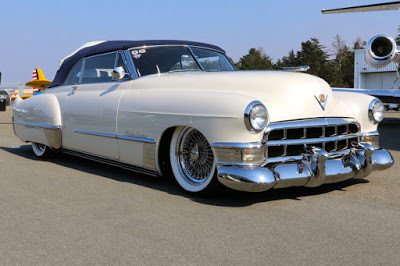 It’s funny how a subtle car can attract attention. This Cadillac features stock lines and trim with a well done but understated white paint job. Wire wheels were added along with a late-model supercharged Cadillac engine and modern drivetrain. 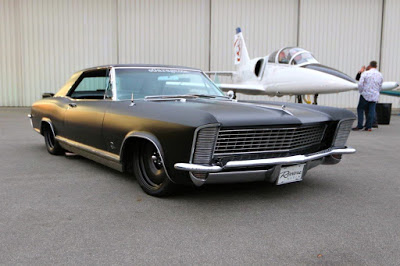 Starting with a 76,000-mile original car, this Riviera’s owner wrapped it in black vinyl, added custom wheels and tires and fitted an adjustable air suspension. A trick adjustable exhaust system features traditional muffled exhaust or free-flow cutouts. Certainly not the flashiest car there, it did hold its own in a field of distinctive automobiles. 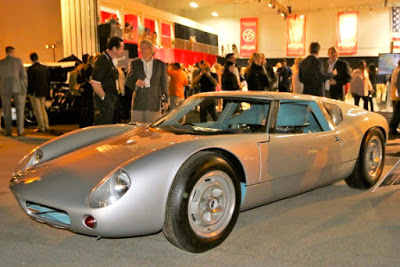 Allen Grant showed his ‘63 Lola GT, a car not seen in public for a very long time. These cars were built by Eric Broadley of Lola and caught Ford’s eye. Later they would be purchased by Ford and used as the basis for the design of the legendary GT40. When Broadley had a falling out with Ford, he ended up with some GT’s and sold this one to Grant, a Shelby team driver, for a reported $3,000.

A very special thanks to Molly & Gordon McCall for their courtesy and hospitality.