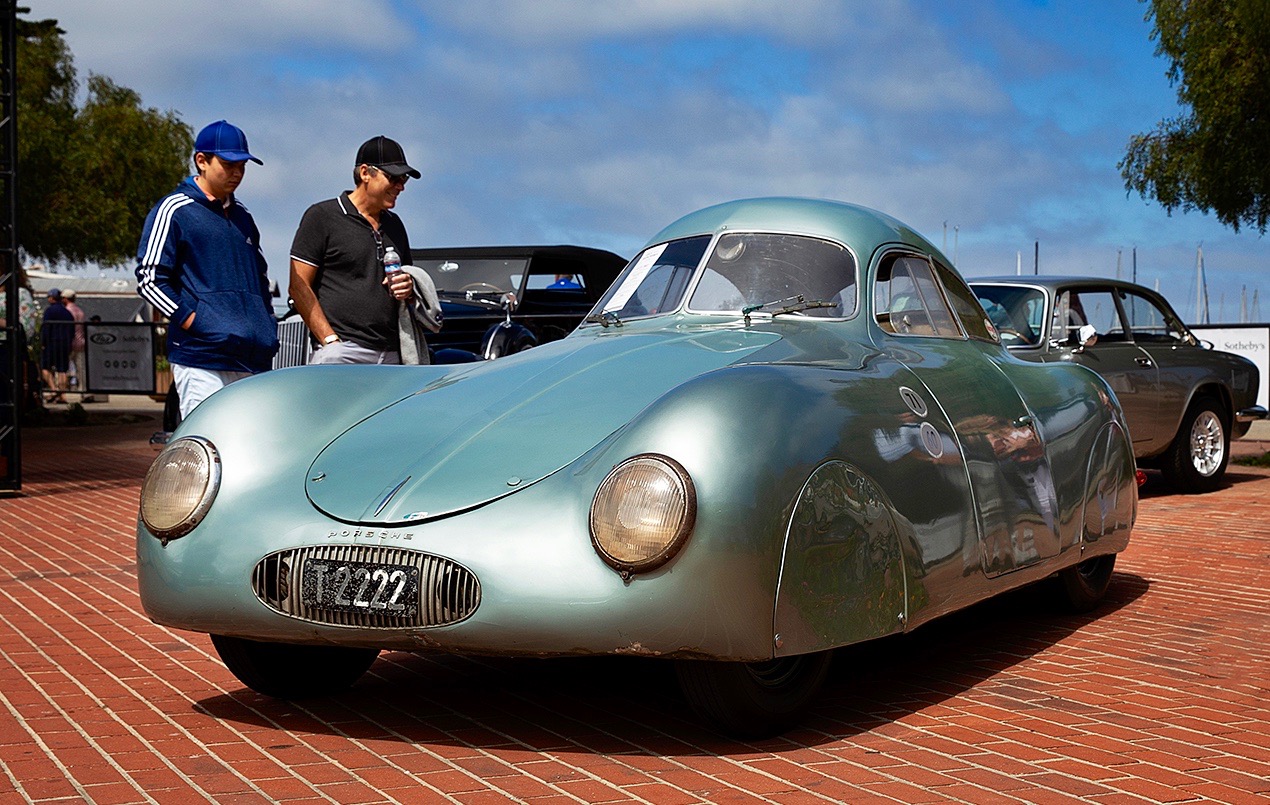 By now you’ve heard the reports: 2019 Monterey Car Week auction results were soft. Not Charmin soft or Pillsbury Doughboy soft, but financially soft – like my timeworn leather wallet. Other analysts described the results as depressed. Not a depression like Shelly’s Frankenstein monster struggled with, or depressed like the seat of a plastic-webbed lawn chair. No, depressed, like how the $10 bill feels all alone in my soft, dog-eared leather wallet! Here’s the scoop: MONTEREY MADNESS: AUCTION ACTION! Preliminary reports from our good friends at Haggerty show Car Week auctions revenue at around $245.5M. Not bad – but certainly not as good as last year’s $370M. So what happened? I’m not going to blame it on trade-war-triggered economic volatility; the culprit was parking! Anyone who’s attended Car Week knows that parking can be a challenge at the high-profile events in Monterey, Carmel and Seaside. By using my advanced formula (1+1=2) I calculated that there was at least $100M of unspent auction money bursting from bespoke billfolds of affluent car guy bidders who never made it to the auctions – and might still be searching for a safe place to park their Koenigsegg. OK, I’m kidding here; let’s put that figure at $80M!

While some sellers may have Post-Auction Blues, the overall vibe throughout the week was upbeat – particularly in the halls and tents of the auctions handling the middle market and lower-end vehicles. The packed room at Mecum on Saturday would go into an air-horn-induced frenzy every time a high bid would be topped. It was crazy-fun and exciting – just like the adrenaline and awe-inducing automotive wonders that rolled across six different auction blocks during Monterey Car Week 2019.

Finally, no Monterey Auctions report would be complete without mentioning a linguistic gaffe that sabotaged the sale of Car Week’s most buzzed-about event – the auction of the ‘39 Porsche Type 64, top, at RM Sothebys. A starting bid of $13M went up on the auction status screens as $30M. Seems the auction staff and the audience was having difficulties understanding the auctioneer’s spoken numbers. By the time $17M displayed as $70M, the shocked mega-millionaire bidders in the room had essentially called it a night. As of this writing, the Porsche remains unsold, but I’ve got a picture of it – along with 19 other auction standouts from Monterey Car Week – so let’s take a look…

Still For Sale – Prof. Dr. Ferdinand Porsche’s inter-war VW inspired sports car, the ‘39 Porsche Type 64. It is the first of three built and the only survivor and it was driven by Ferdinand and his son Ferry. Specs: 1,346 pounds, race-built, dual Solex carb VW engine, lightweight aircraft-gauge chassis and a narrow two-seat cockpit. Considered the most historically important Porsche ever publicly offered. It was RM Sothebys’ auction star that didn’t twinkle! 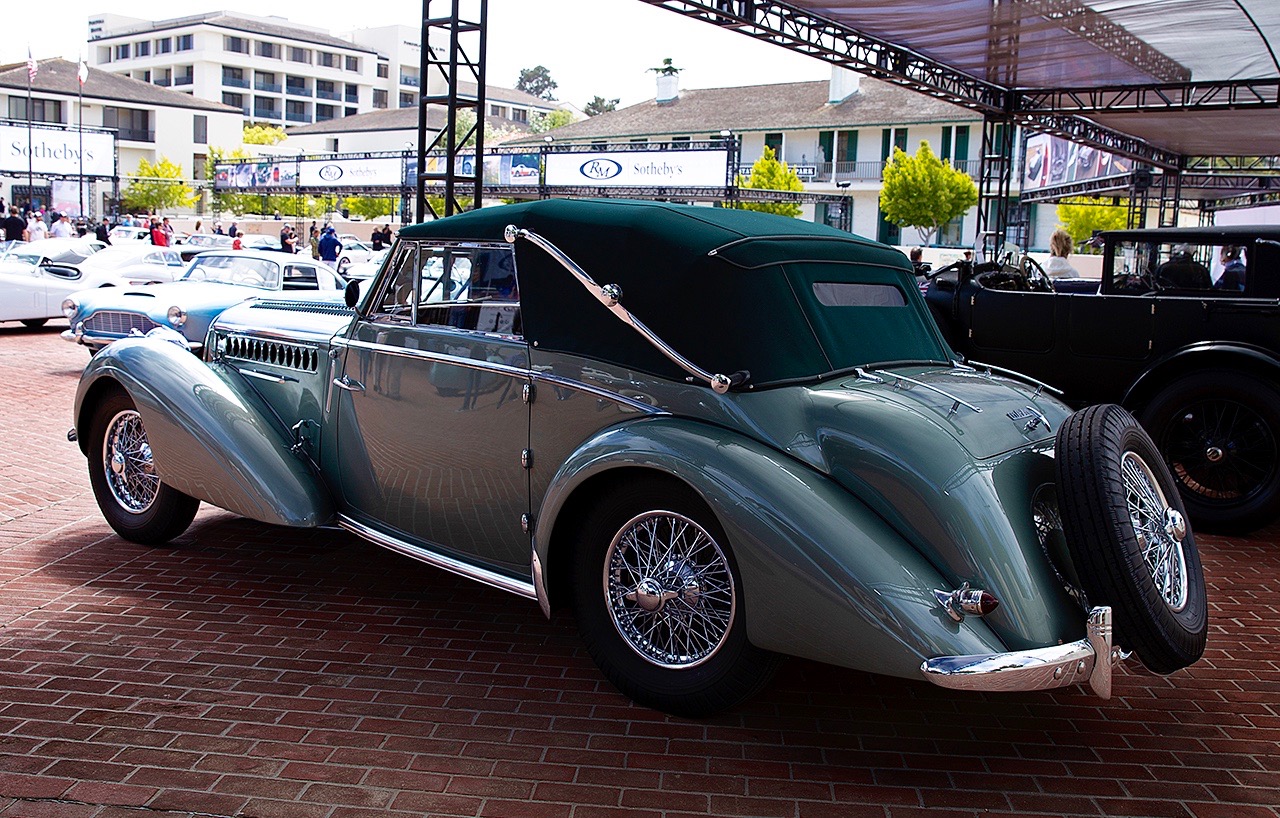 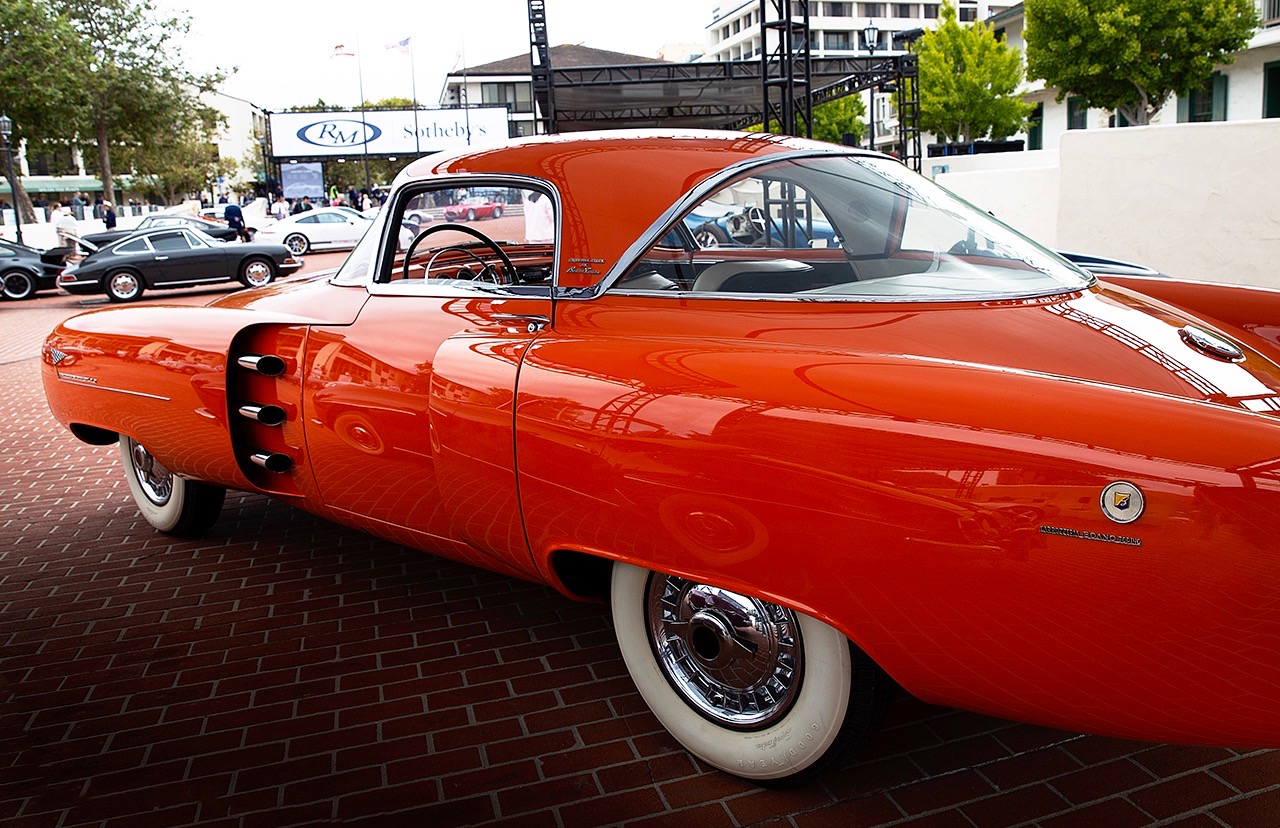 Hot Rod Lincoln! This bright orange ‘55 Lincoln Concept Car looks poised to peel-out to the RM auction stage. With its jet aircraft inspired design by Gian Paolo Boano, the Indianapolis was an exclusive Ford Motor Company study for the 1955 Turin Automobile Salon car show. It rocketed – with questionable help from the faux side pipes – to a high bid of $1,105,000, inclusive of buyer’s fee. 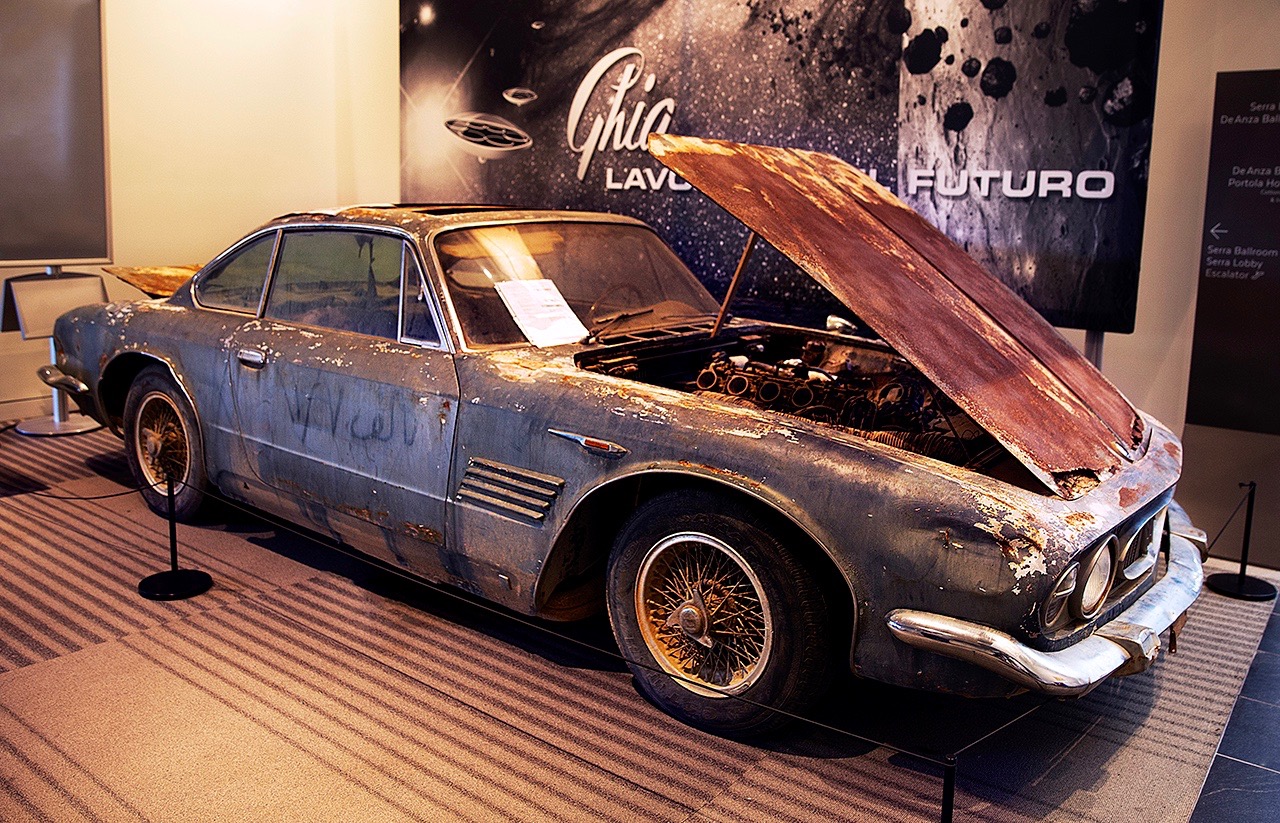 Barn-Find-Baby: ‘61 Maserati 5000 GT Coupe by Ghia Selling Points: Excessive rust corrosion – everywhere. Bent and twisted frame. Cracked block, transmission case and differential. Inoperable accessories. Leakage – everywhere. Offered Without Reserve or Apologies. Hammered at RM for $533,000 because it’s a one-off, coachbuilt example of Maserati’s ultimate road car, one of only 34 built and – wait for it – the unused spare tire is still in the trunk! 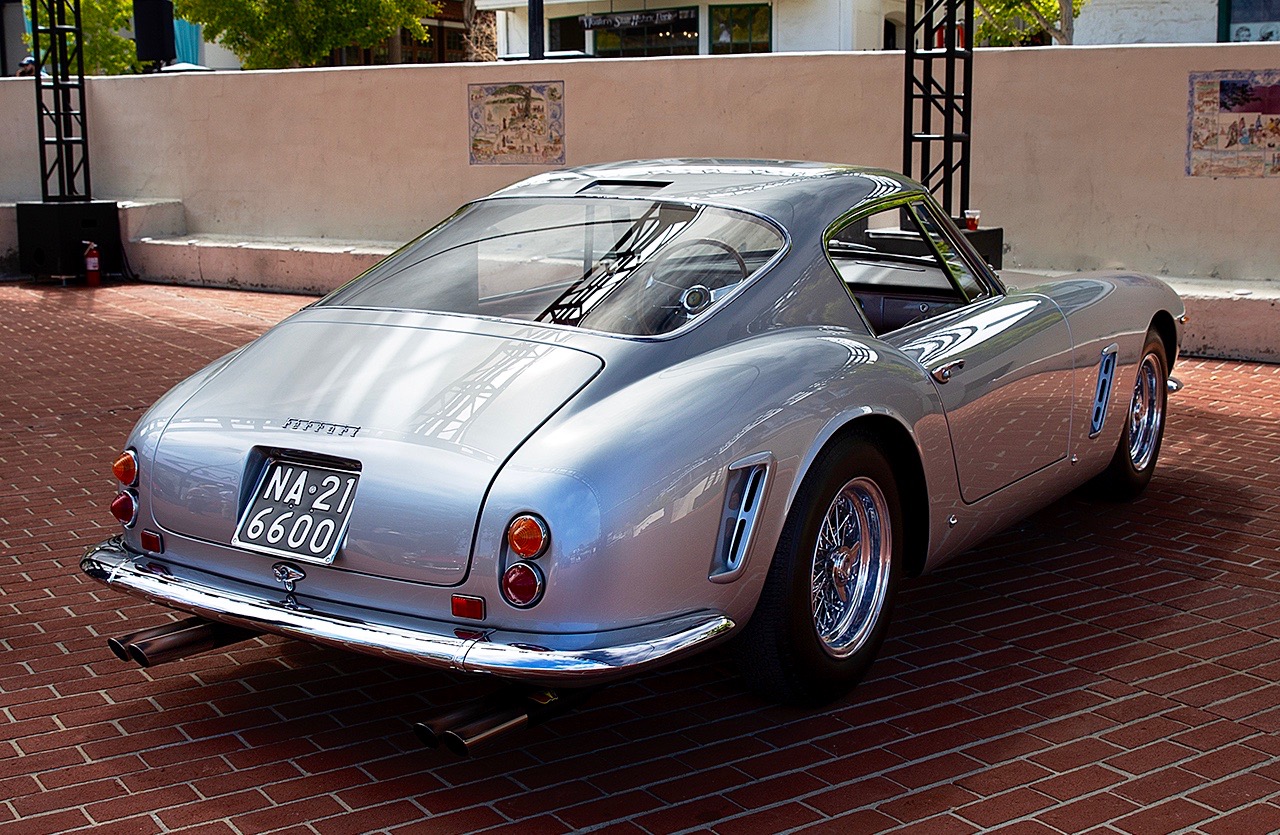 The ’62 Ferrari 250 GT SWB Berlinetta is considered one of the most attractive and well-proportioned Berlinettas (sport coupés) in Ferrari’s history. This is chassis no. 3359 GT, the 132nd of 165 total built. It is flawlessly finished in the original color combination of Grigio Argento over Rosso. SWB is a short-wheelbase designation. The hammer price at RM Sothebys was $8,145,000, inclusive of buyer’s fee! 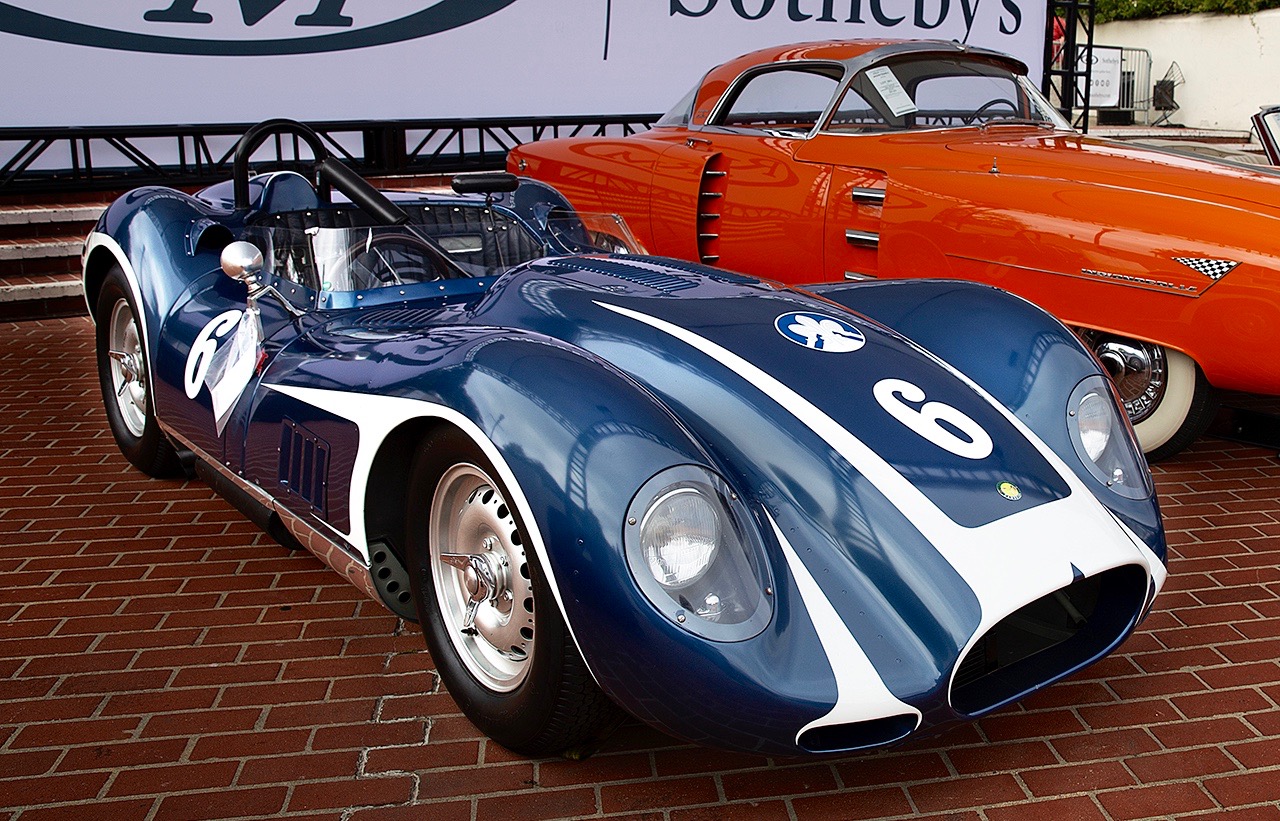 This blue & white ‘89 Lister-Chevy racecar is nicknamed a Knobbly because of its curvaceous and bumpy bodywork. The first Lister was built in the mid-1950s by privateer racer Brian Lister. Thirty years after production ended in 1959, four “Centenary” edition cars were built. This is chassis No. BHL 148 that was upgraded with an MSA-approved 5.3-liter Chevy V8. It was sold after the RM auction. 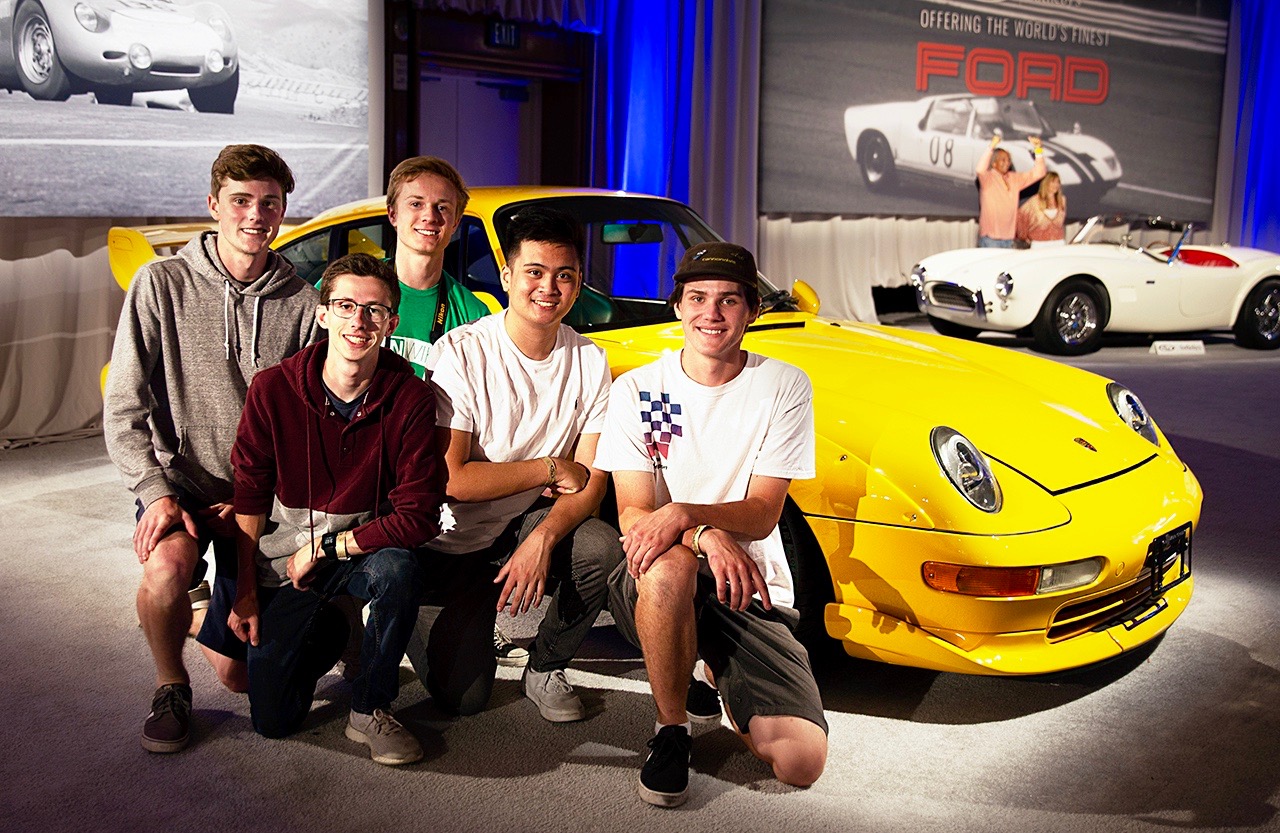 You can’t help but notice that the majority of  Car Week attendees are of an older demographic. So it’s always nice to see a younger generation showing interest and enthusiasm in classic and collector car events. These guys were from the Bay area and were thrilled that I asked them to pose next to an RM Sothebys’ auction car of their choice – which turned out to be this Speed Yellow ’96 Porsche 911 GT2. 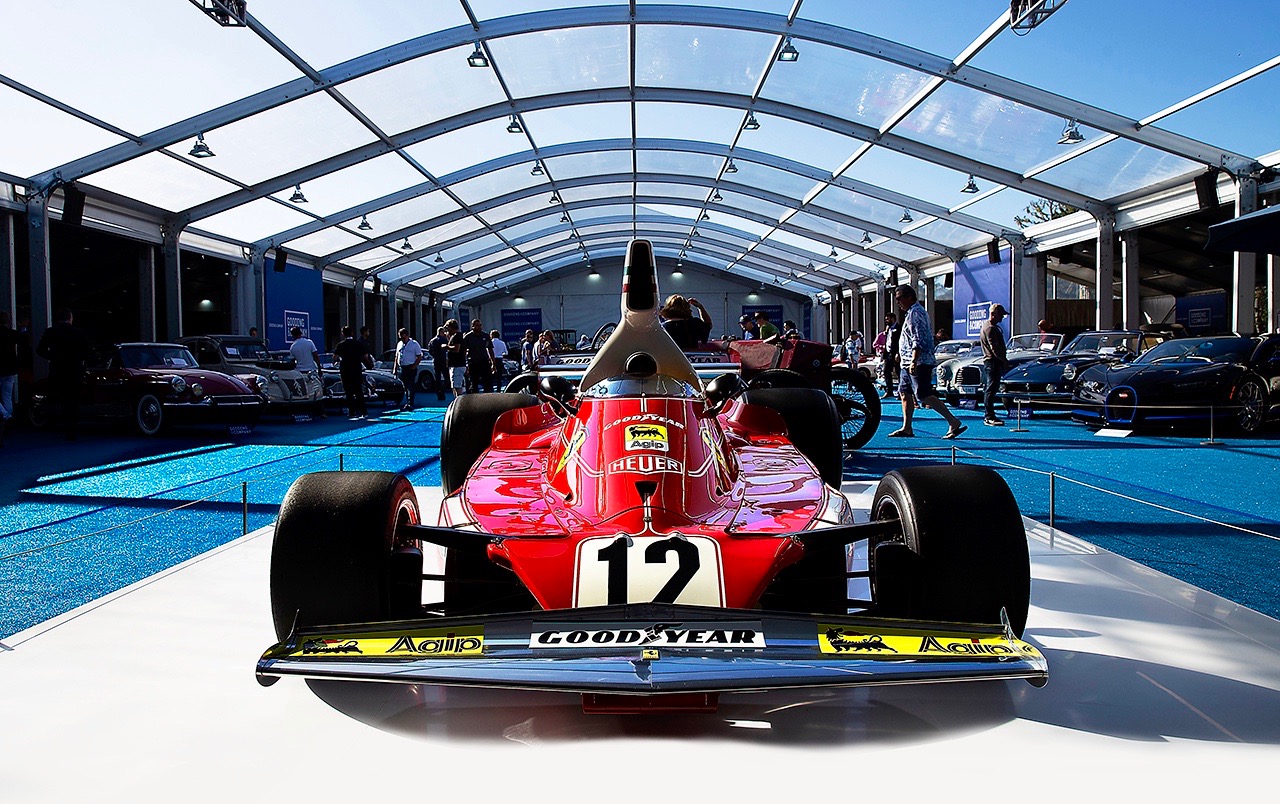 It was as formidable sitting under the glass roof at the Gooding & Company auction as it was when driven by Niki Lauda to the Formula 1 Championship in 1975. The ‘75 Ferrari 312T, chassis no. 022, brought a rich provenance and race history to the auction block: Scuderia Ferrari S.p.A, Lauda, Forghier, Silverstone, Pebble Beach, Watkins Glen, Nürburgring, Grand Prix, Amelia Island, Ferrari Mondial. Fire all this up and you get the iconic, Lauda-driven, race-winning – $6M at the hammer – Ferrari. Fantastico! 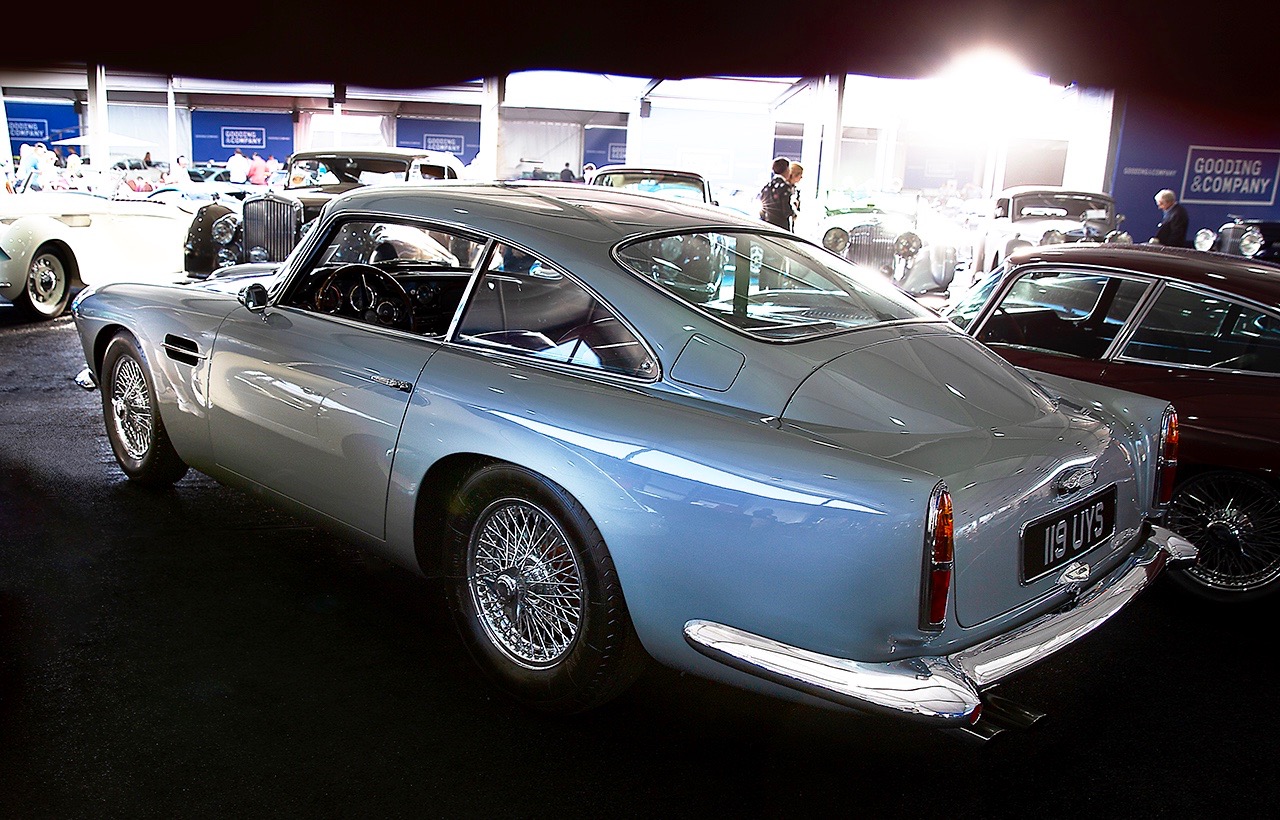 Snow Shadow Gray ‘60 Aston Martin DB4 Series 1. This example is one of only 149 Series 1 cars built. You would expect a beautiful Touring Coachwork classic like this to have fetched more than the $522,000 it sold for at Gooding, but all details matter to collectors. So, deduct value points for a not original motor, missing chassis numbers, improved but not period-correct wiring harness, multiple owners and, well, the price drops – even when the Wow Factor rises! 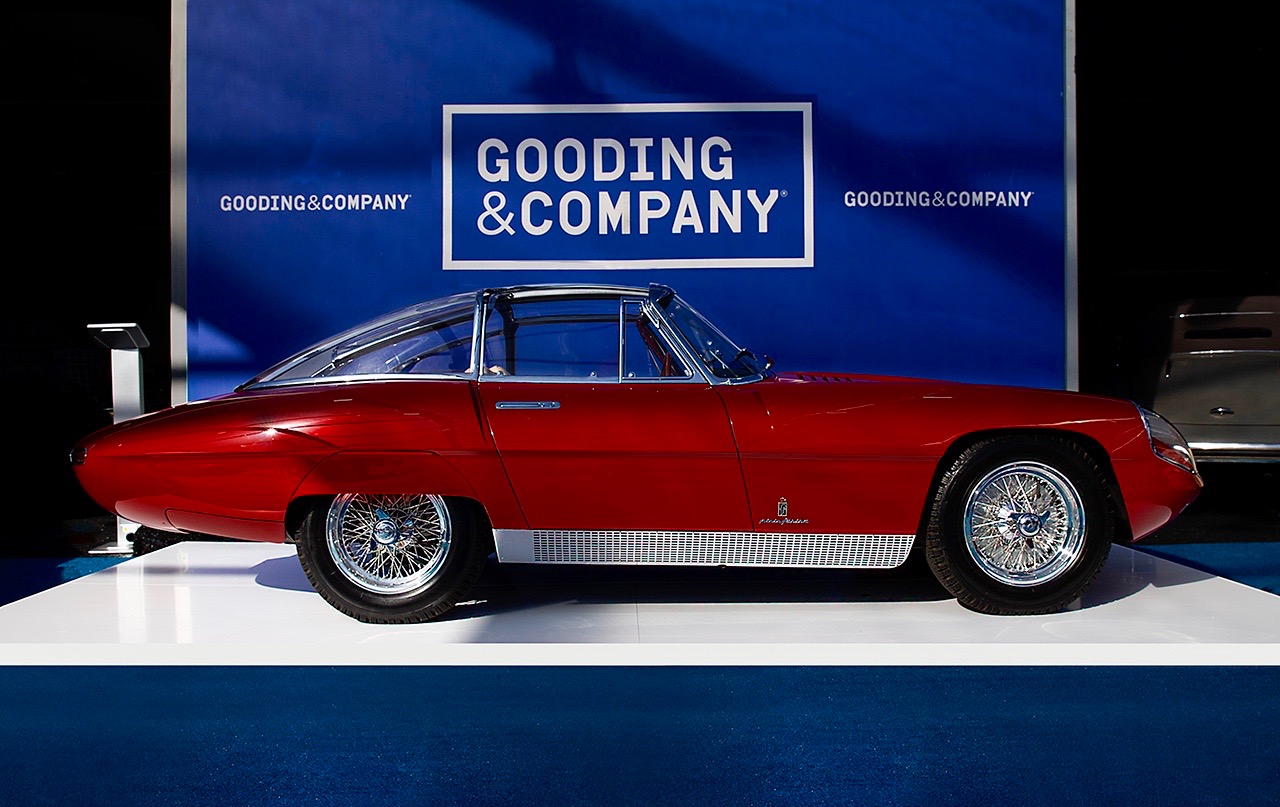 This spectacular glass canopy’53 Alfa Romeo 6C 3000 CM Superflow IV was designed and built by Carrozzeria PininFarina. In the mid-1970s this Alfa was geared for high-speed road racing and driven at speeds exceeding 160 mph. Gooding & Company believes this car is among the most important and distinctive Alfa Romeos ever built. Gooding was this car’s first public auction;it failed to sell. Current asking price is $5,500,000. 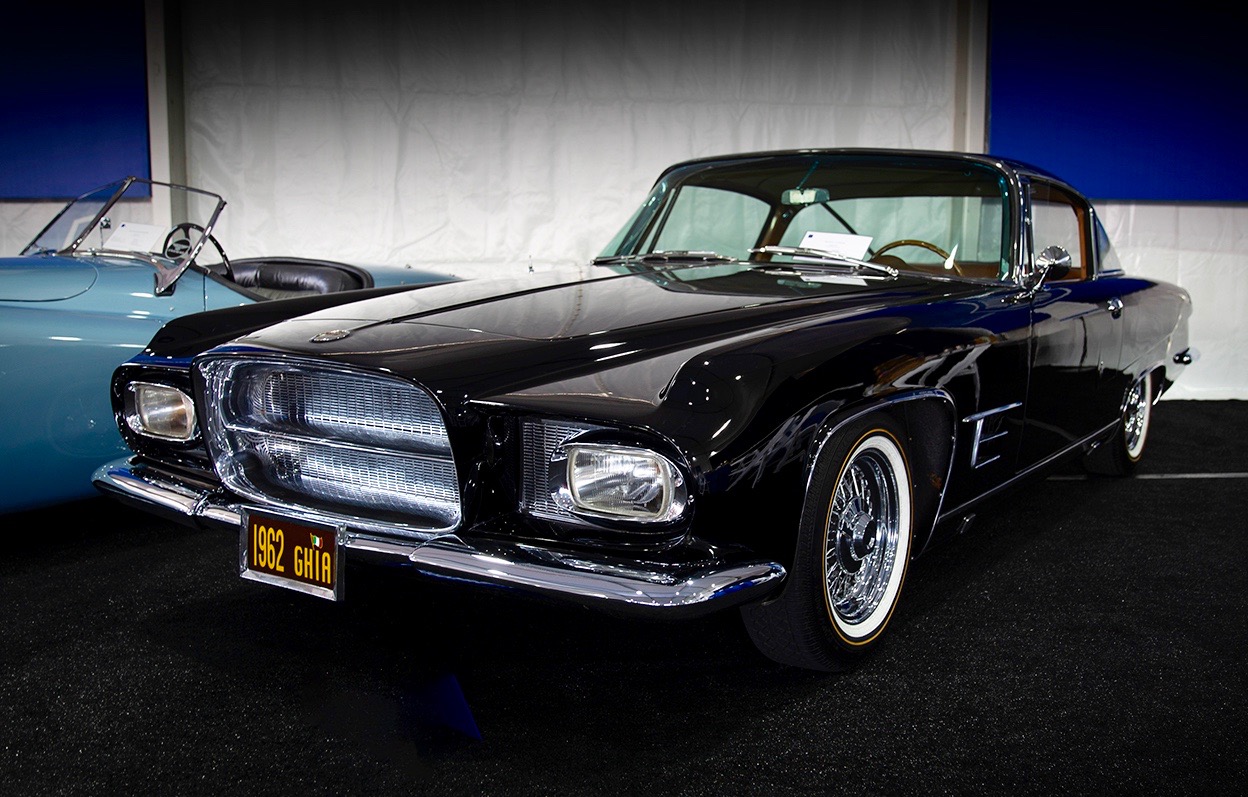 This very rare Rat Pack ‘62 Ghia L6.4 Coupe, chassis 0325, is one of just 26 built. It was originally shipped to Paul Farago of Ghia USA and used as factory demonstrator from 1963 to 1967. It was then acquired by Dean Martin and was customized by George Barris, who painted it Rose Bronze metallic and added a gun holster under the seat. Boasting its celebrity provenance, it sold for $313,000 at Gooding.

Sporting a large, longitudinal dorsal fin for stability, this ‘38 Tatra T77A Limousine was created by Czechoslovakian carriage builder Tatra, and was the world’s first serial-produced, aerodynamic air-cooled automobile. Its intriguing provenance includes German Wehrmacht and Soviet Army confiscations, numerous Concours’ accolades and prestigious art museum exhibitions. It was more than a curiosity at Gooding, where it hammered at $412,000. 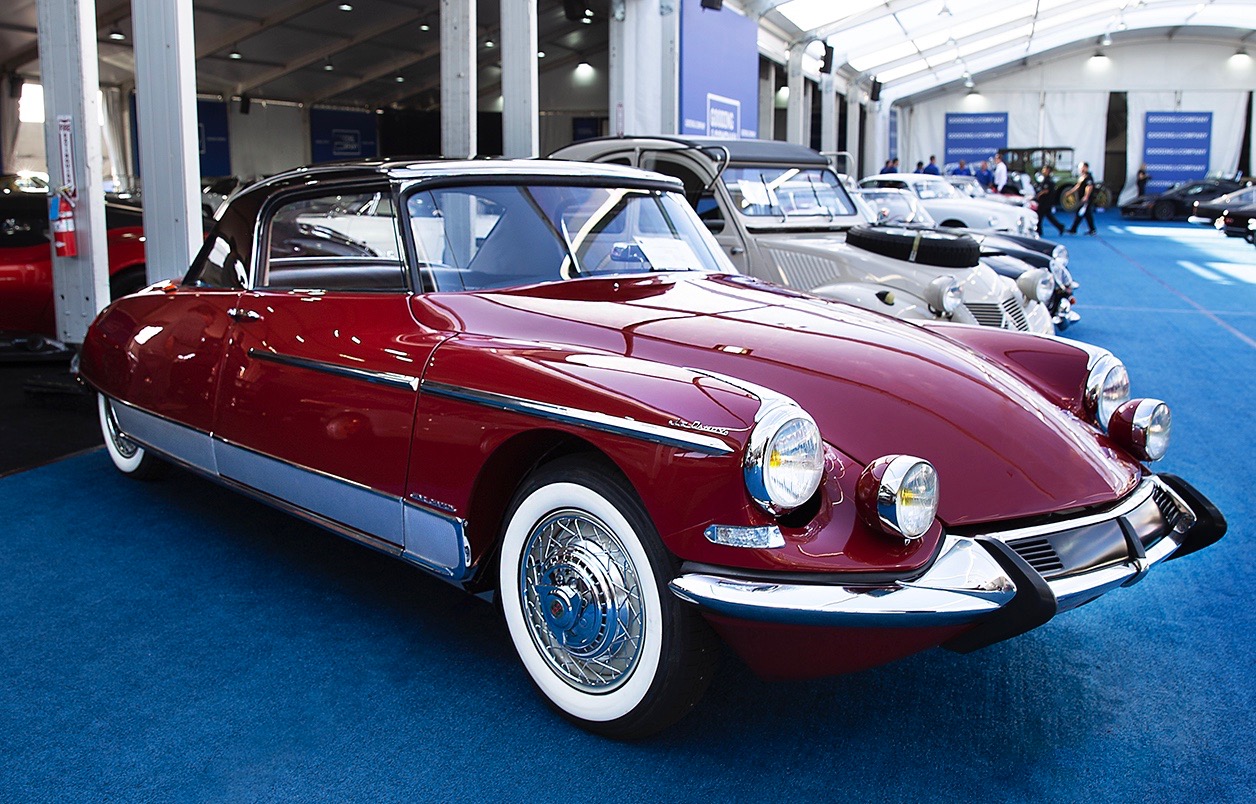 It seems only appropriate that this sleek and stylish French coupe would be badged Le Dandy. Featuring a revolutionary aerodynamic design and radical hydraulic suspension by coachbuilder Henri Chapron, this ‘62 Citroën ID19 Le Dandy Coupe just begs to be filled with baguettes, Beaujolais and jeunes beautés for a romp in the French countryside. Smartly acquired at Gooding for $368,000. 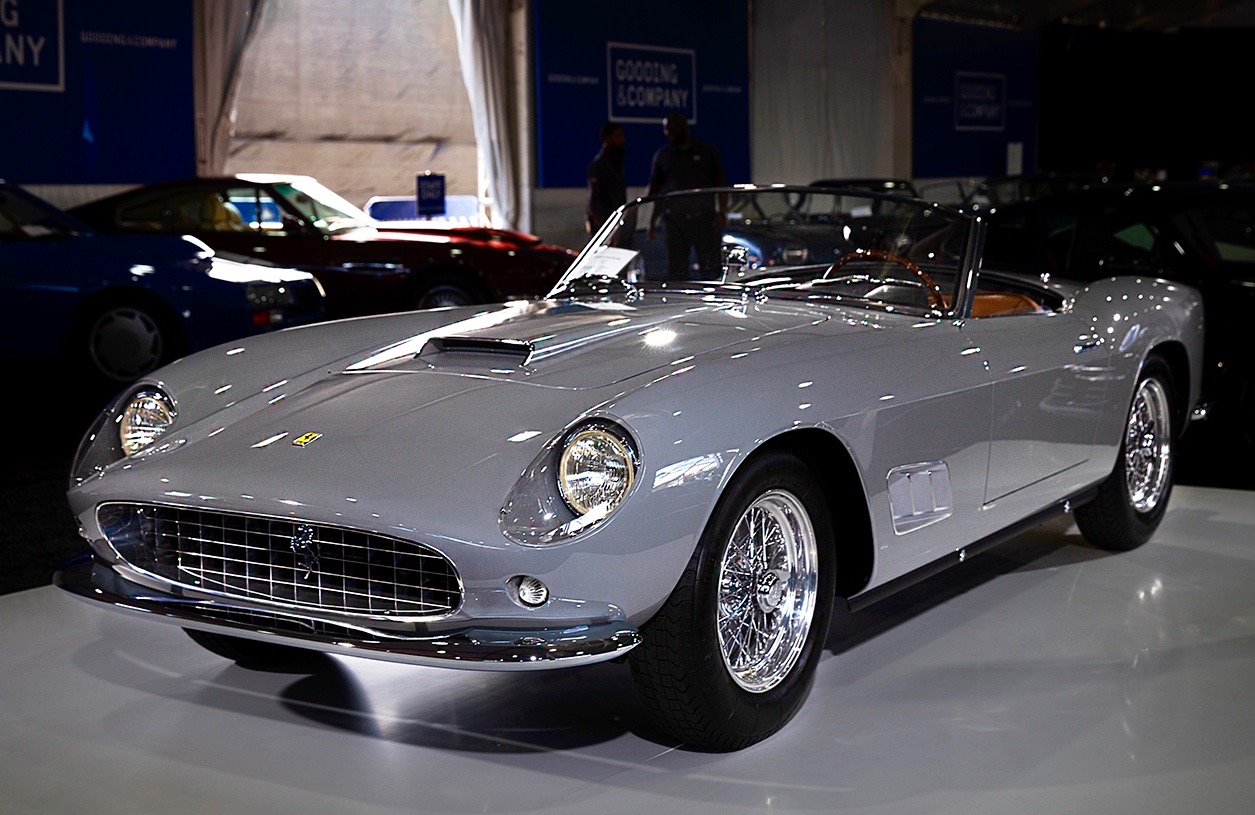 One would think that selling a car built in 1958 for $9,905,000 would be cause for celebration, but this Platinum-Award-Winning ‘58 Ferrari 250 GT LWB California Spider fell short of its Gooding auction estimates of $11-13M. With a provenance that includes owners from Texas to London to Ontario, this long-wheelbase 12-cylinder thoroughbred combines performance with magnificent Scaglietti coachwork. 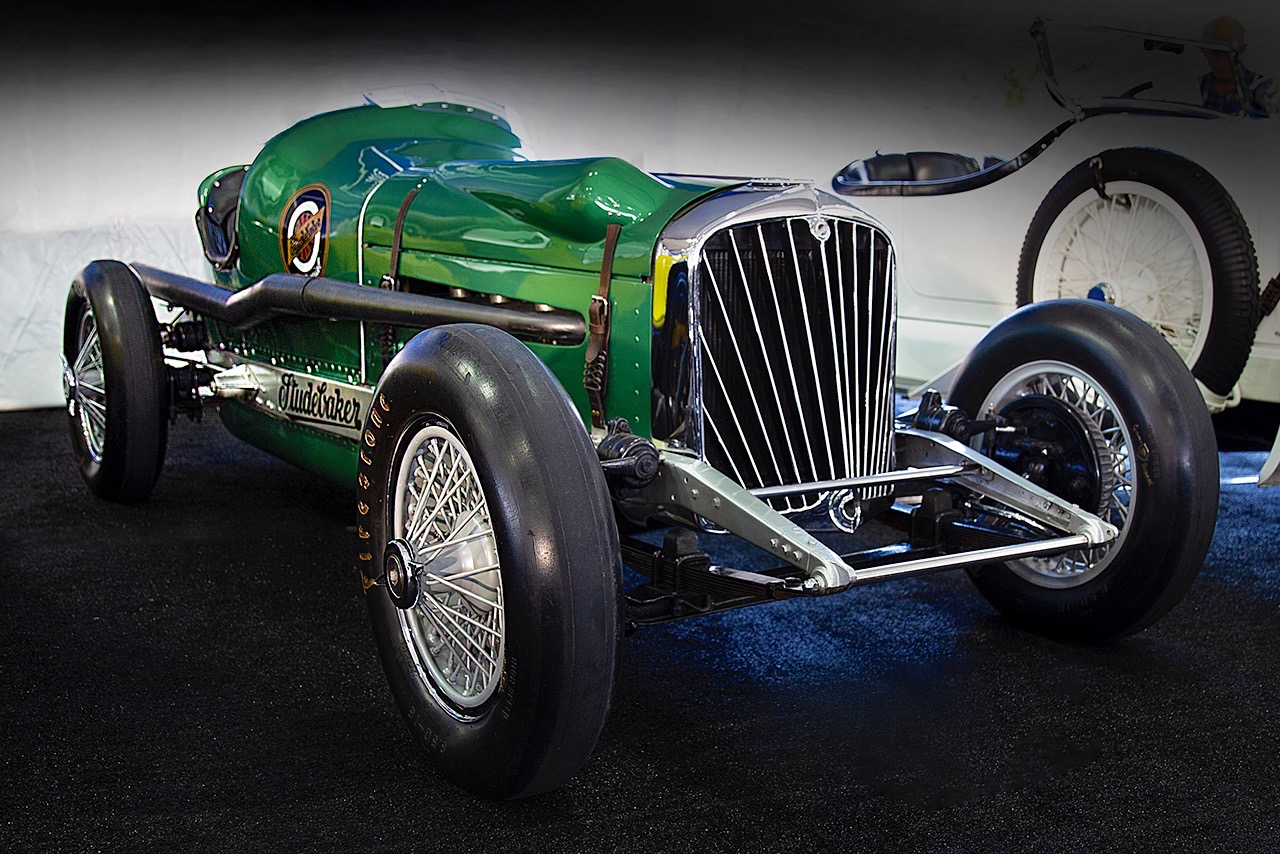 Originally built as collaboration between Studebaker’s director of testing George Hunt and famed Bonneville racer Ab Jenkins, the “God I Love That Grill” ‘31 Studebaker Special Indy Car easily raced into the hearts of the bidders and attendees at the Gooding & Company auction. This American made competition car is a three-time Indy 500 entrant (1931-1933) and Winner of the 1931 Pikes Peak Hill Climb. It exceeded auction estimates of $500,000 to $750,000 by selling for $1,105,000! 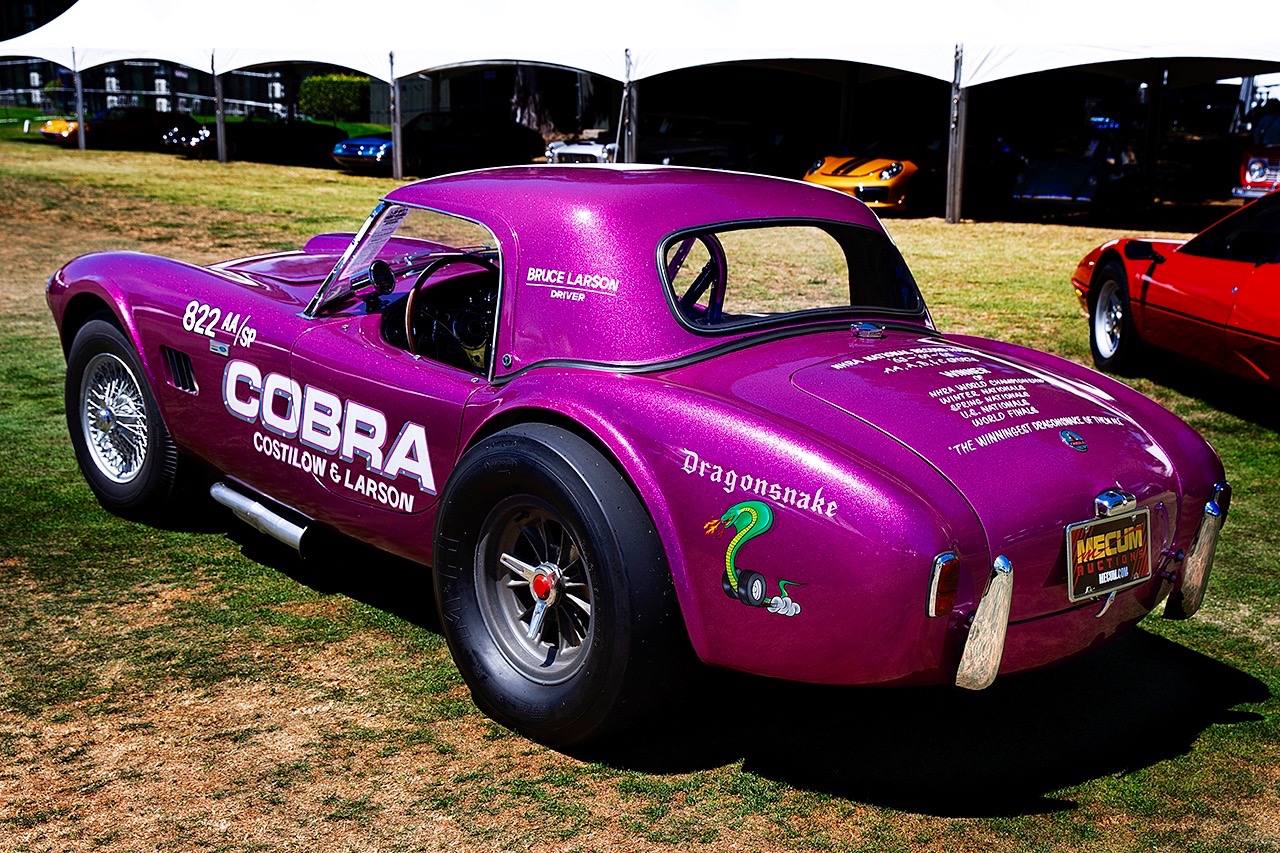 I intentionally missed a high-profile Monterey Car Week event on Saturday so I could peel-away any Car Week pretense, put on one of my well-worn car guy Ts and head over to the Everyman’s auction at Mecum. The first car to bite my interest on the field was the Dragonsnake Cobra. This 289, 4-speed quarter-mile legend is the winningest competition Cobra in history. Estimate was $750,000 to $1,000,000. A No Sale, however at $650,000. 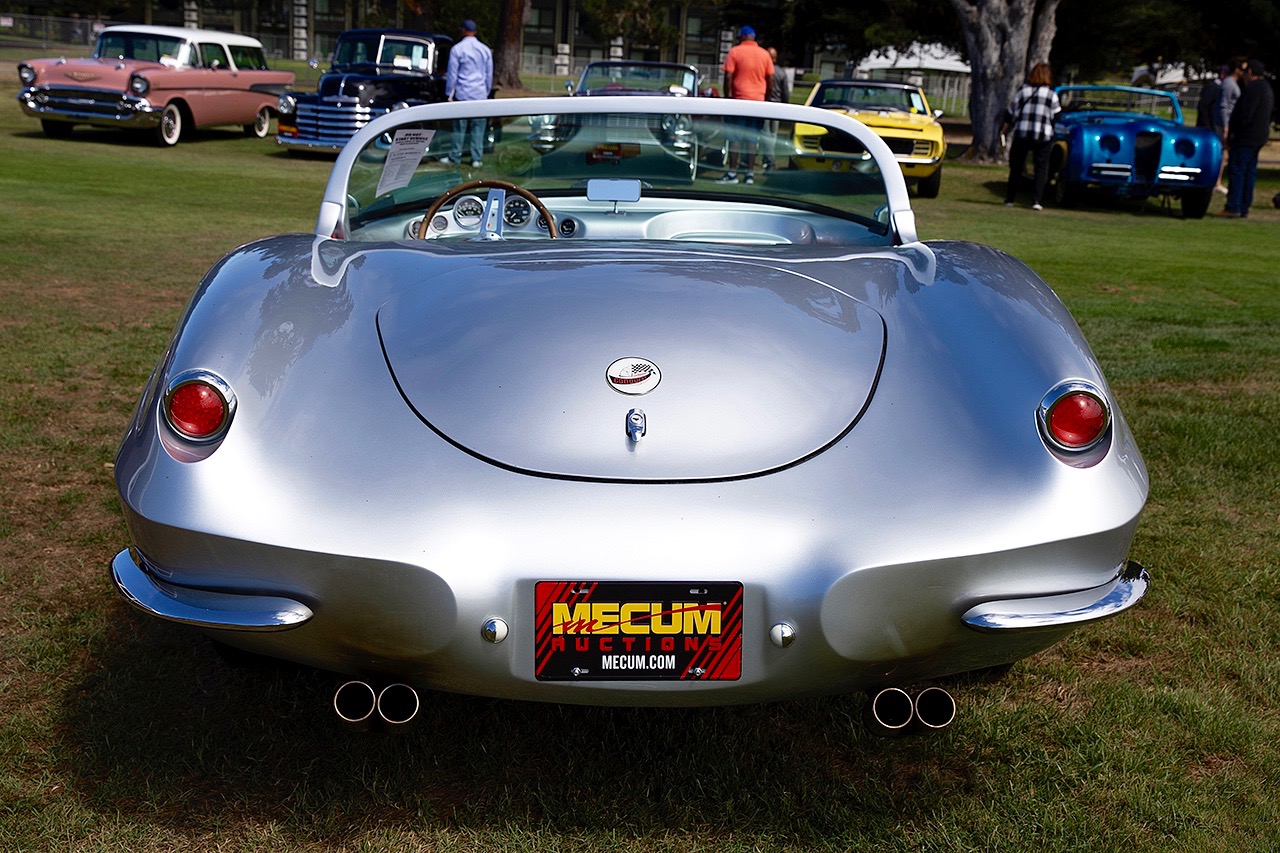 OK Gang, here’s a little challenge for our bright and brainy historians who will no doubt be able to quickly identify this rare, custom two-door roadster. Hints: Fiberglass body, V-8 power, 1957 Road & Track cover car and delivered to its original owner in 1958. It’s currently titled as a 1962 “Assembled Vehicle.” Send us your best guesses via the comment box below this report. Good luck! 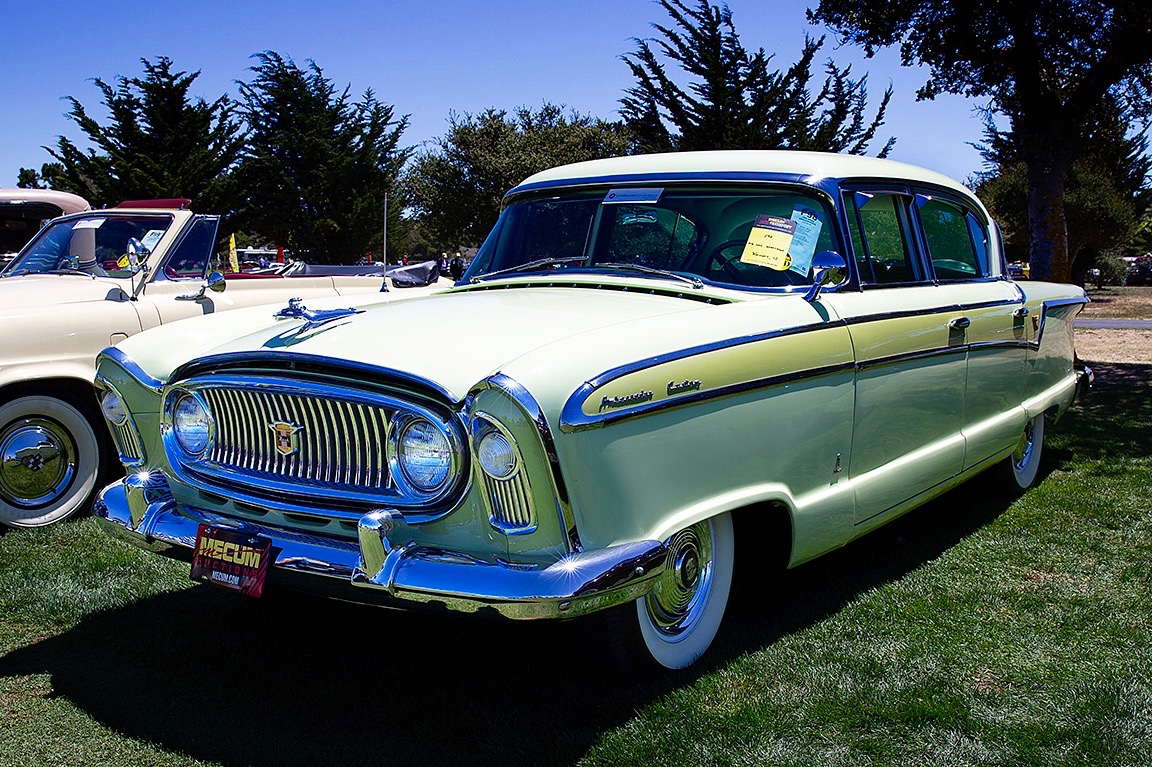 This time capsule, unrestored ‘56 Nash Ambassador made its way to Mecum  from the Academy of Art University Collection. Powered by a 352 Packard V8, this sensational original has features only Madison Avenue could name – Jetfire engine, Ultramatic transmission, Scena-Ramic windshield, Weather-Eye fresh air system and Speedline styling. It reached a mid-range estimate selling for $31,350. 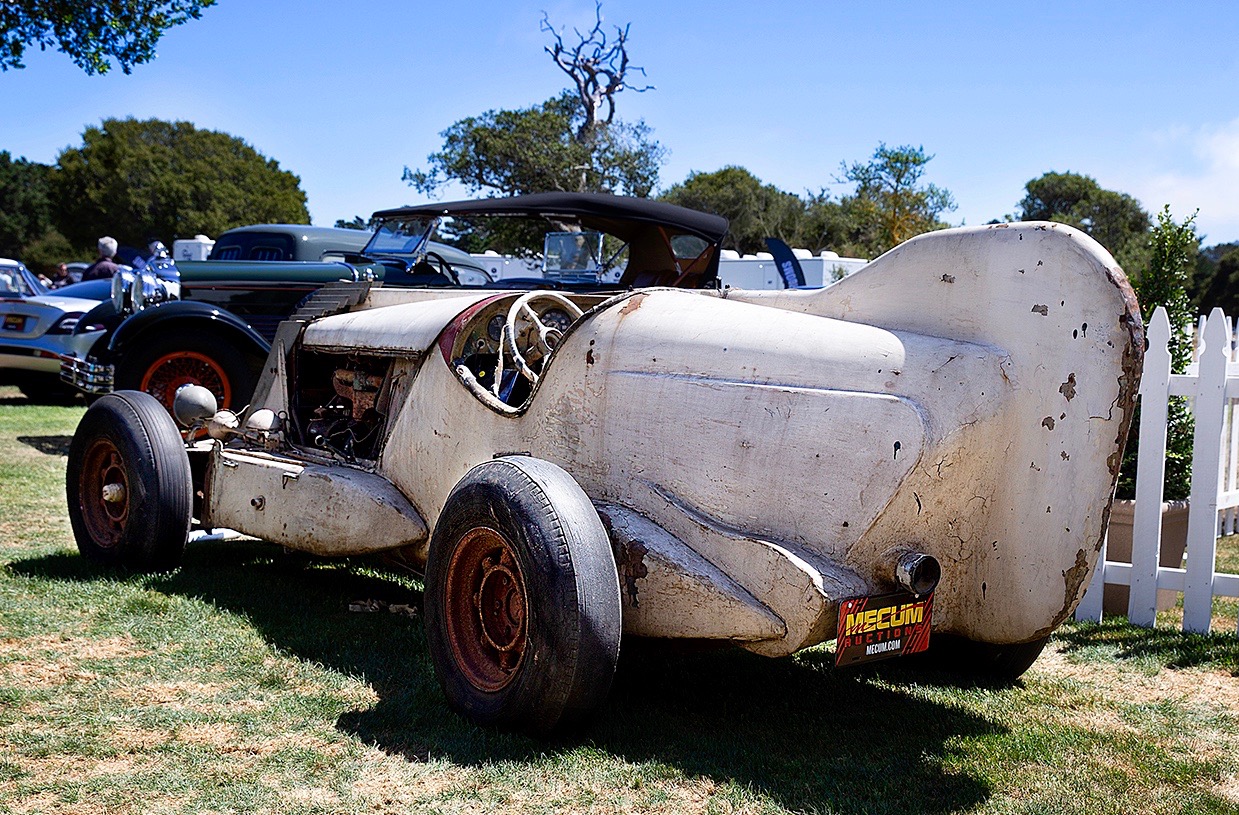 Before Alex Tremulis became chief designer at Auburn-Cord-Duesenberg he designed this ‘33 Chevrolet custom for vaudeville comedian Ralph Cook. This “Funny Car for a Funny Man” rode on a leaf spring Chevy suspension, was powered by an inline-six and most notably, featured imaginative aerodynamic coachwork. This timeworn survivor was included in the Blackhawk Exposition Sale at Mecum Monterey.

Throughout my five days in Monterey, a nagging thought kept distracting me: “There’s no way I can afford any of these cars. Certainly nothing from Gooding or RM – maybe something from the oil-dripping Concours d’Lemon – but really.” As this dark cloud hovered above me at Mecum, I spotted what appeared to be a Ferrari 250 GTO. The high-bid, no-sale auction price on the window of this ‘76 Datsun Alpha One GTO Coupe Ferrari knockoff was $50,000. Maybe I could do a Go Fund Me and raise $51,000 for this Tom Cruise Vanilla Sky movie car? But really…