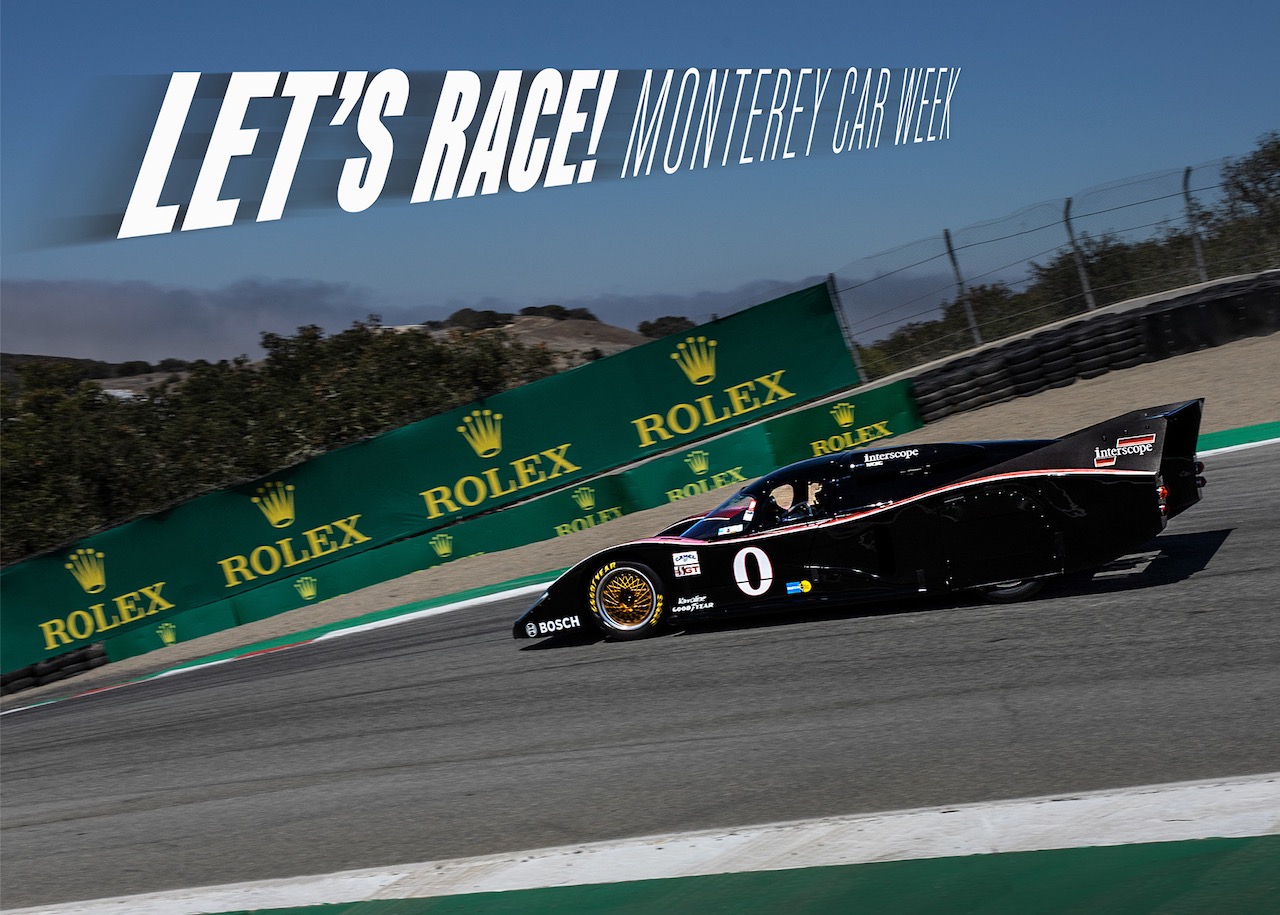 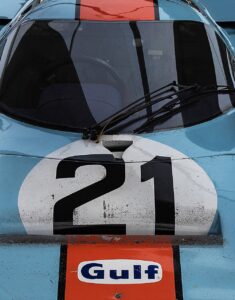 There’s no doubt about it – it’s an addiction that overrides the allure of champagne parties on velvet lawns, pageants of coach-building luxury, or hobnobs with motoring’s fast and famous. It’s estimated that more than 15 million speed junkies attend U.S. motorsports events annually, and I just couldn’t wait to get to Rolex Monterey Motorsports Reunion at WeatherTech Raceway Laguna Seca to get my fix.

This four-day racing celebration began on Wednesday, August 17th and ran through Saturday, August 20th. It was preceded by two days of the Monterey Pre-Reunion on the  13th and 14th. In that my Car Guy Chronicles assignment would afford me just one day at Laguna Seca, my plan was to hit it hard on Friday and run it fast. I hustled to trackside photo-op locations, roamed the paddock lanes for close-ups of the cars, drivers and crews and finally ended up on a small tower at Turn 8 where I grabbed this report’s lead photo of Interscope’s beautiful black, Lola T600 charging out of Turn 7 and down into the infamous Corkscrew. This Lola design was one of the first sports cars to use ground effects – reduced space between the car’s floor and the track’s surface – to create greater downforce.

One of the big draws to this year’s reunion was the Le Mans Centennial Heritage Display presented by Motul. It was curated exclusively for Car Week’s Rolex Monterey Motorsports Reunion at Laguna Seca to honor the historic significance of the 24 Hours of Le Mans and to kick-off the year-long celebration of the event’s upcoming 100th anniversary in 2023.

The Le Mans cars on display were generally overall winners or class winners from private collections and museums. A number of these legends were fired up for exhibition laps and ran at relatively safe speeds behind the Lexus Safety Cars. Together with the cars racing in the four Le Mans-specific run groups, it was arguably the largest such gathering of authentic Le Mans cars ever assembled in America. So, buckle-up gang… Let’s Race! 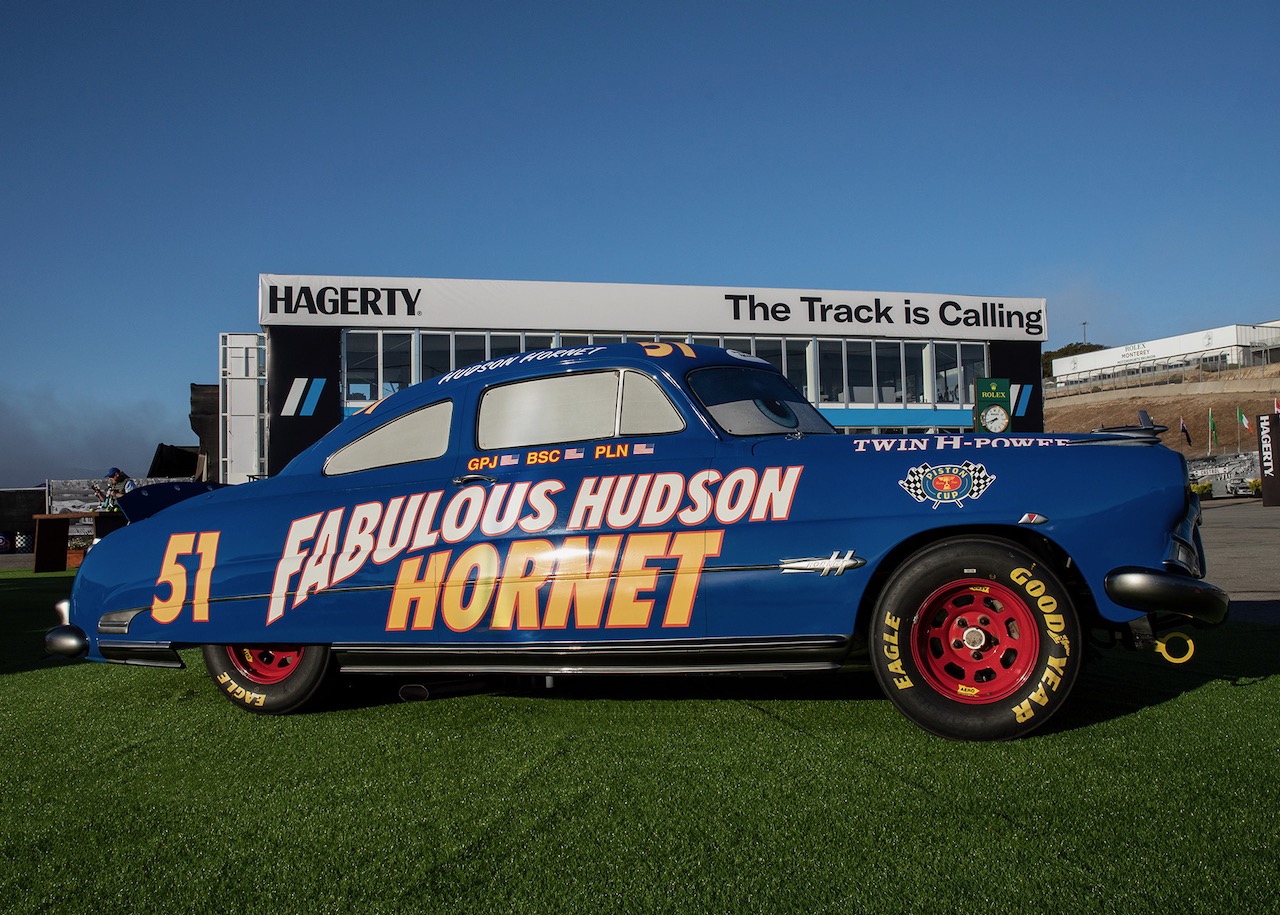 This ‘51 Fabulous Hudson Hornet was impossible to miss on the paddock side of the WeatherTech Raceway pedestrian bridge. It was strategically parked across from the Hagerty Drivers Club Building which is adorned with the slogan The Track is Calling. Now if the track could indeed talk it might sound like Paul Newman who was the voice for the ‘Doctor Hudson Hornet’ car in the 2006 Pixar animated film, Cars. 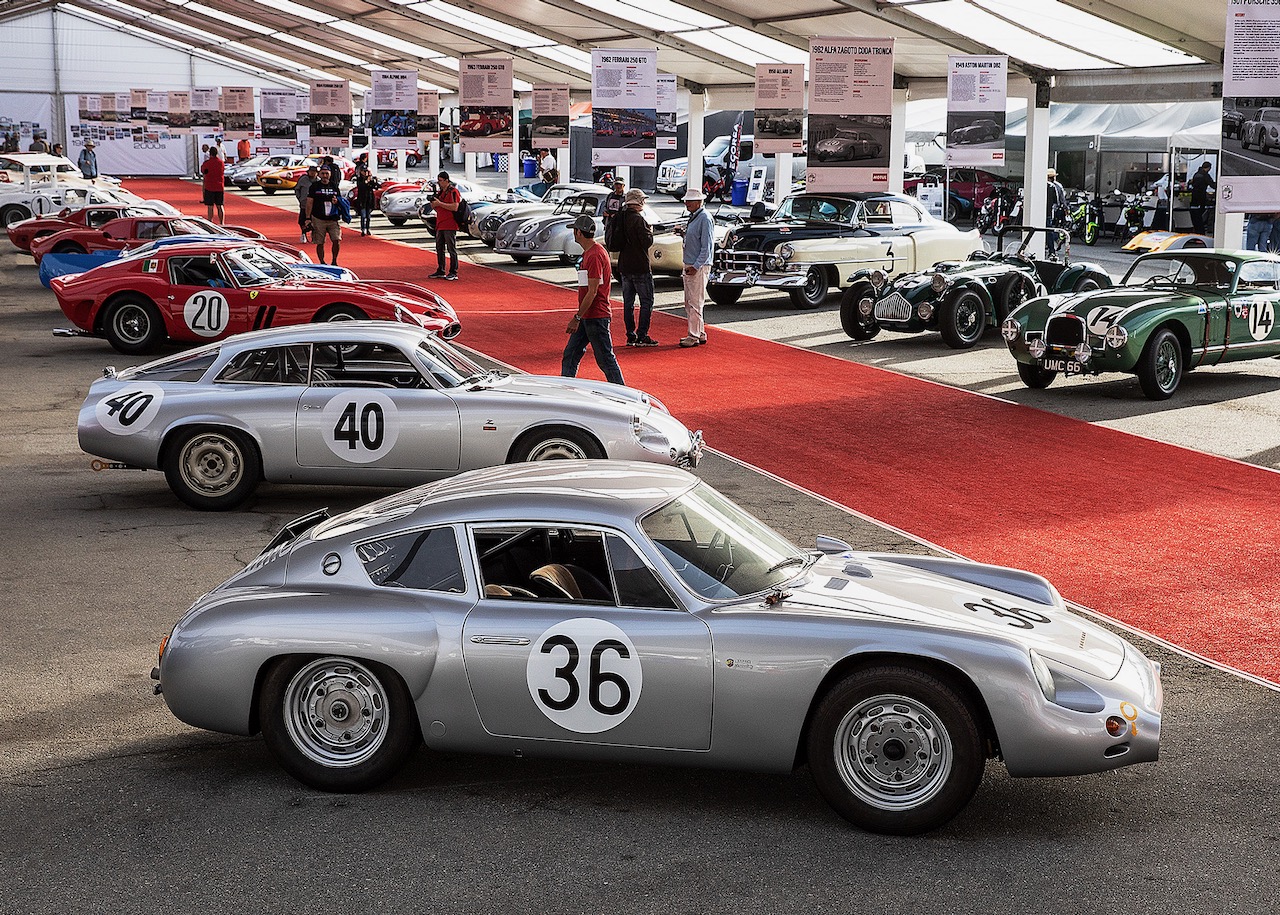 The Le Mans Centennial Heritage Display got the red-carpet treatment. It was laid out with the cars carefully presented under a sturdy, high-roof open paddock garage. There was plenty of room to walk around each car – like car No. 36, the silver Porsche 356 Abarth Carrera GTL. Easy viewing of the cars’ histories and specs were provided by the display of large placards that hung from the metal roof beams. 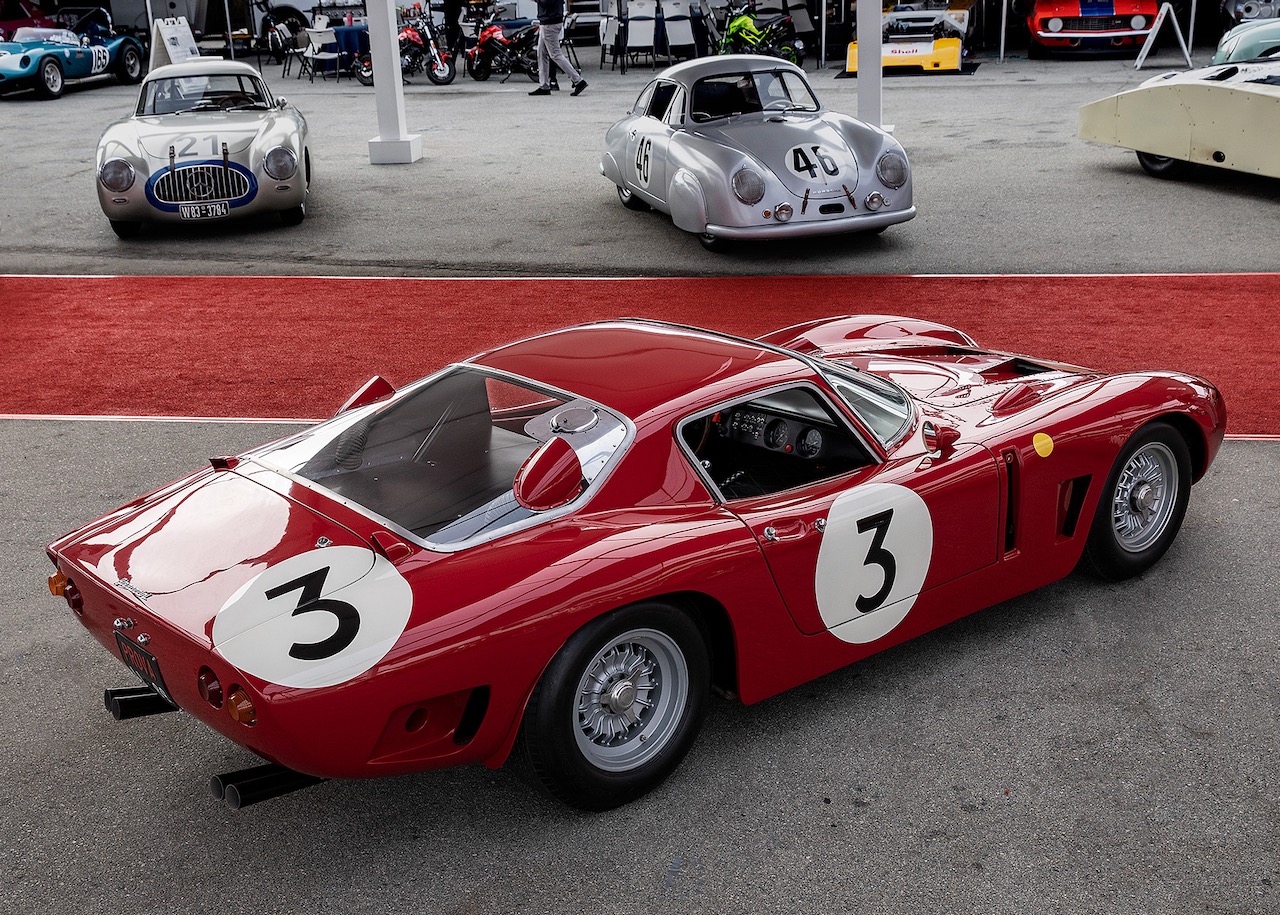 Don’t let its beauty fool you; this ‘65 Iso Bizzarrini A3/c Corsa was a formidable competitor at Le Mans, winning its class and finishing ninth overall in 1965. Currently owned by Bruce Meyer, the A3/c Corsa is described as a “front-mid-engine” design with the engine practically sitting in the driver’s lap. Now forgive me, but that’s a lap dance I’d love to personally experience! 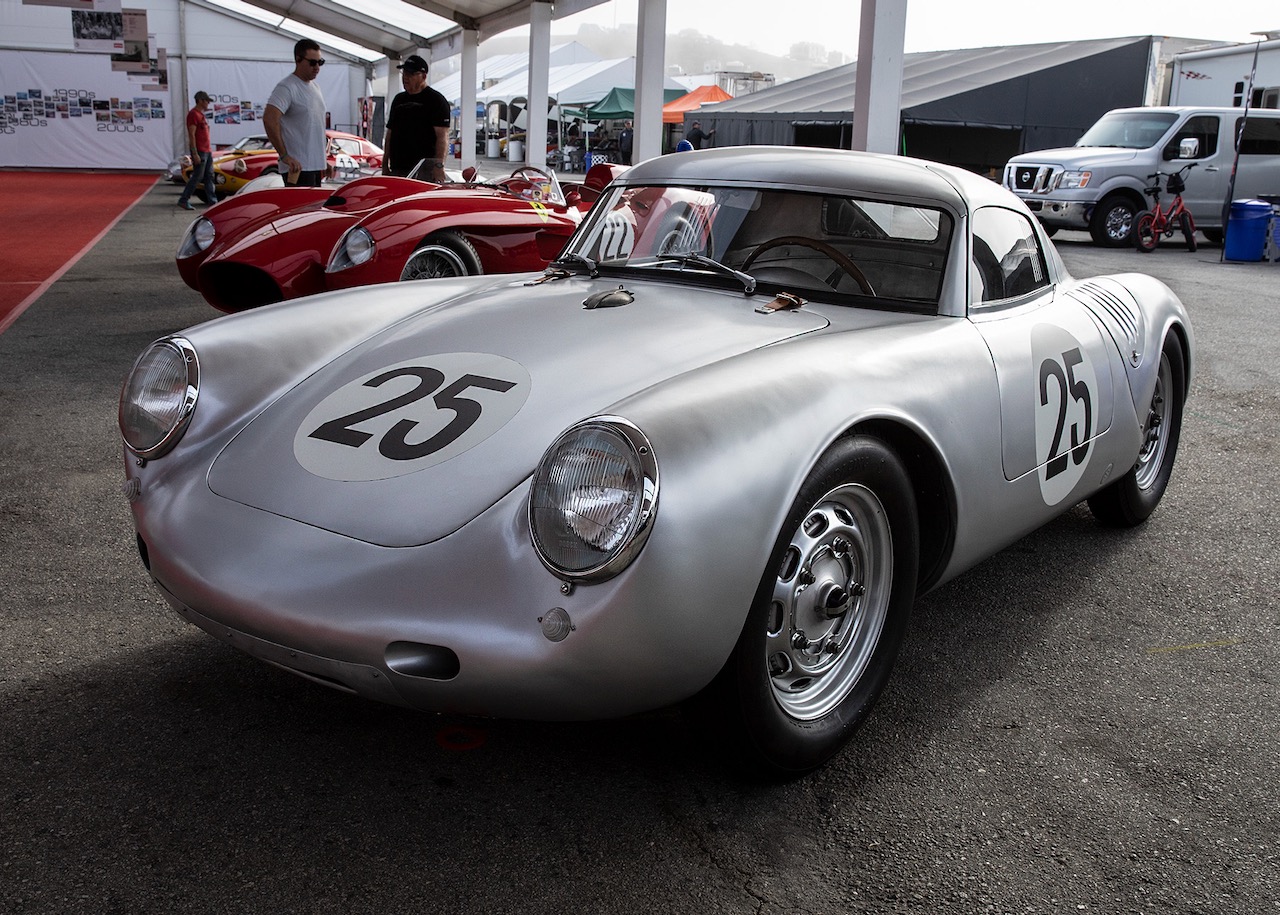 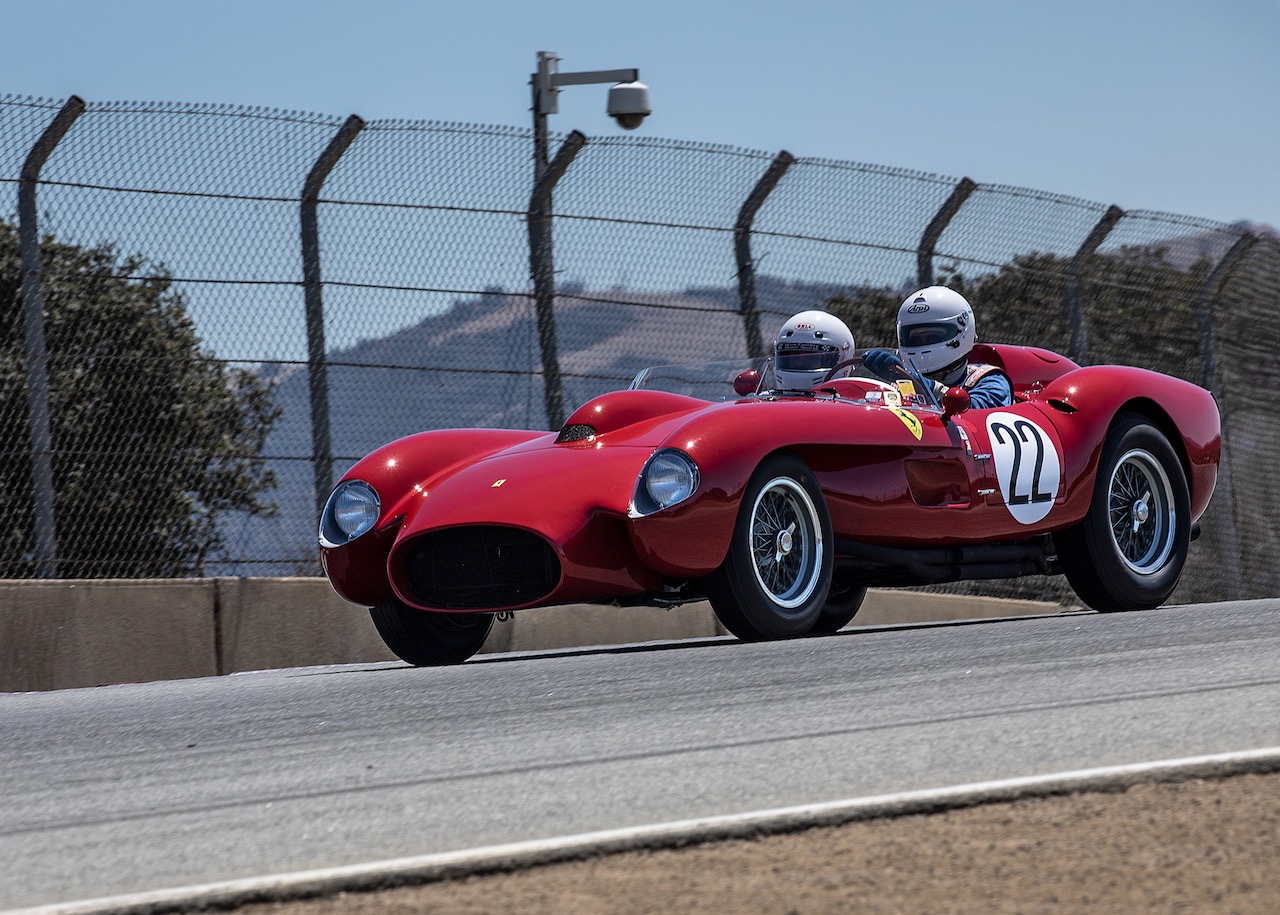 Who’s the lucky soul riding shotgun in this drop-dead gorgeous Ferrari 250TR? Mechanic? Best friend? Insurance agent? Well, your guess is as good as mine but whoever the passenger and driver are they are no doubt grinning from ear-to-ear. This car raced in the 1958 24 Hours of Le Mans but didn’t finish after being involved in an accident on its 72nd lap. 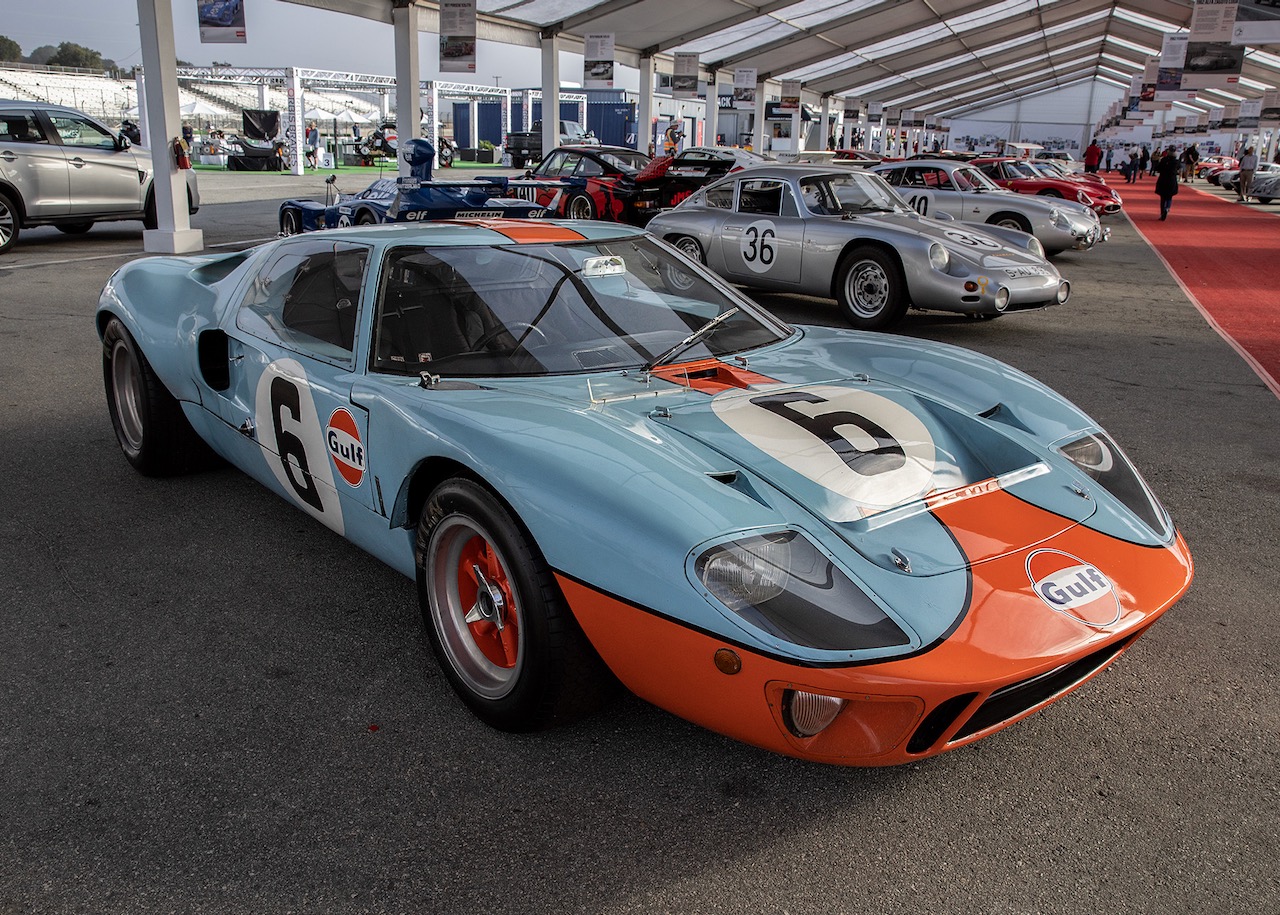 It’s immediately recognizable in its powder blue and marigold orange Gulf livery. This is the famous Ford GT40 P/1075 in which Jackie Ickx won the 1969 Le Mans, beating the Porsche he was drafting by two seconds. It was one of the closest competitive finishes in the race’s history and the second win for the car using the same chassis. Ickx would credit the mechanics and the team’s mantra of “Dare to Win” for the victory. 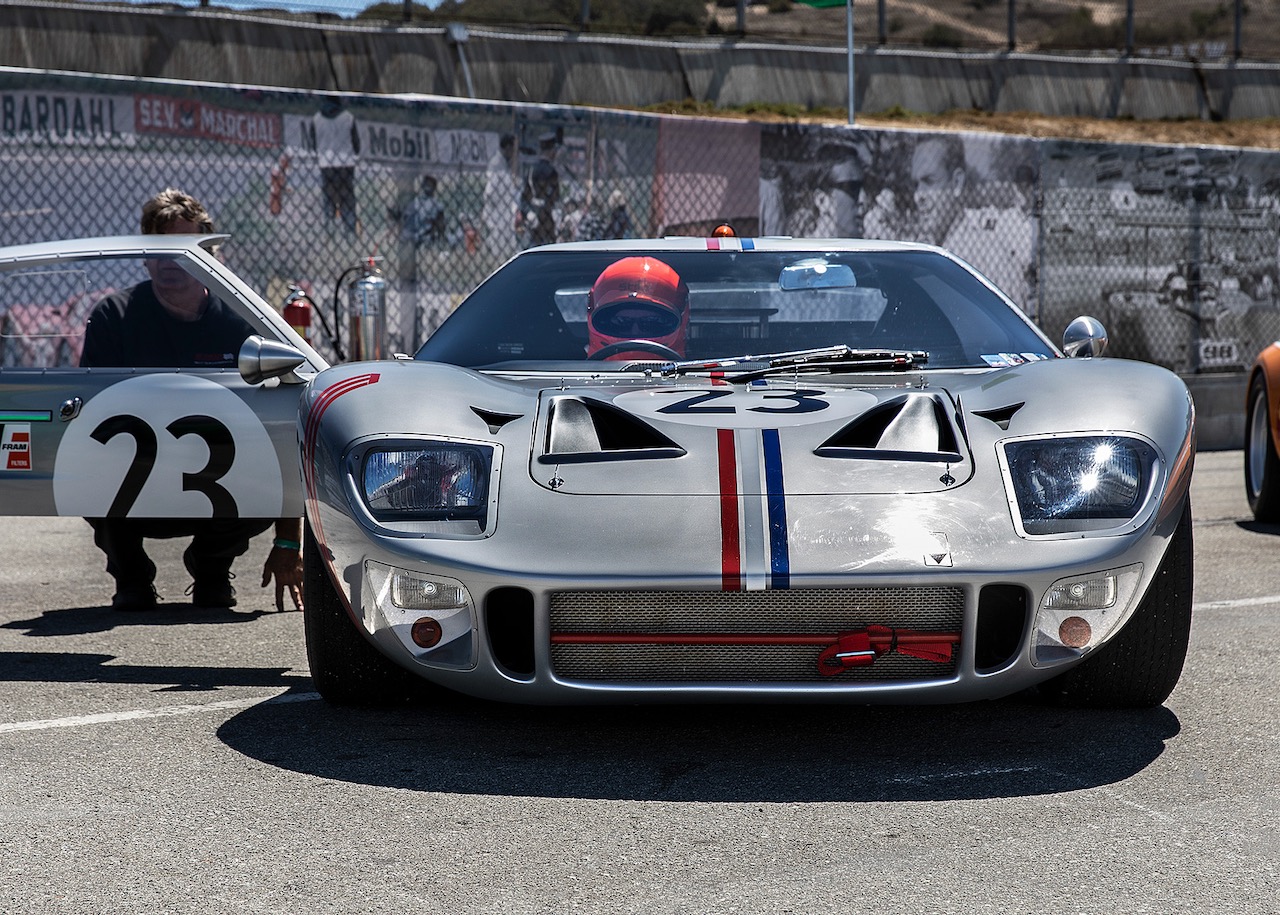 Raced and crashed during practice at Le Mans in 1966, this silver Scuderia Bear GT40 P/1029 was resurrected some time ago and has since been competing in exhibition races like the Goodwood Revival in Sussex, UK and here at the Rolex Monterey Motorsports Reunion at WeatherTech Raceway Laguna Seca. I captured this staging lane moment with driver and mechanic, laser-focused on directions from the race officials. 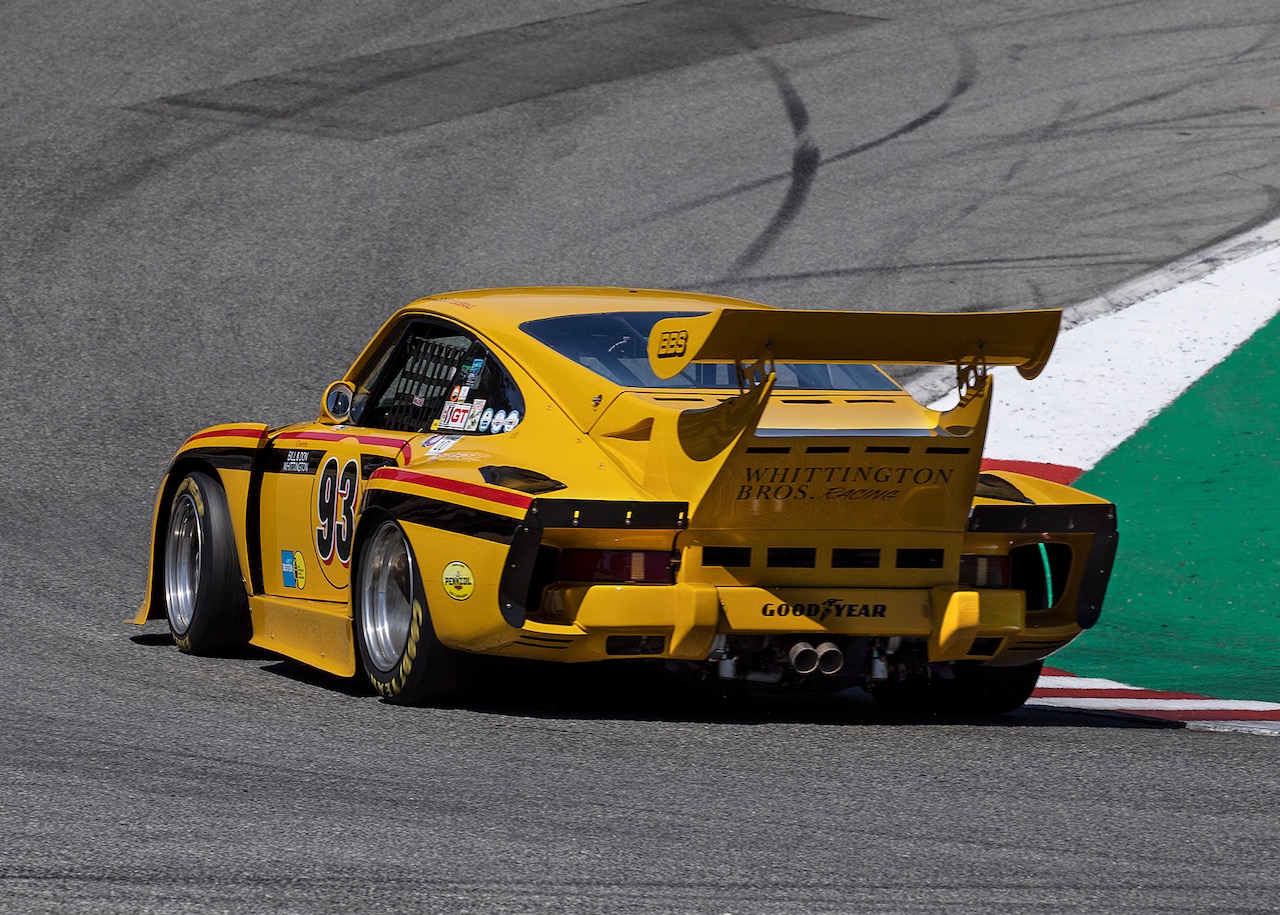 The Whittington Brothers Racing Porsche 935 Turbo kisses the paint at the bottom of the Corkscrew at Laguna Seca. These American brothers, Don and Bill, along with German co-driver Klaus Ludwig won its class at the 1979 24 Hours of Le Mans in their 3.0L twin turbo Porsche 930 for Kremer Racing of Germany. Of note in 1979 was the presence of fellow racer Paul Newman who was driving for Dick Barbour Racing. 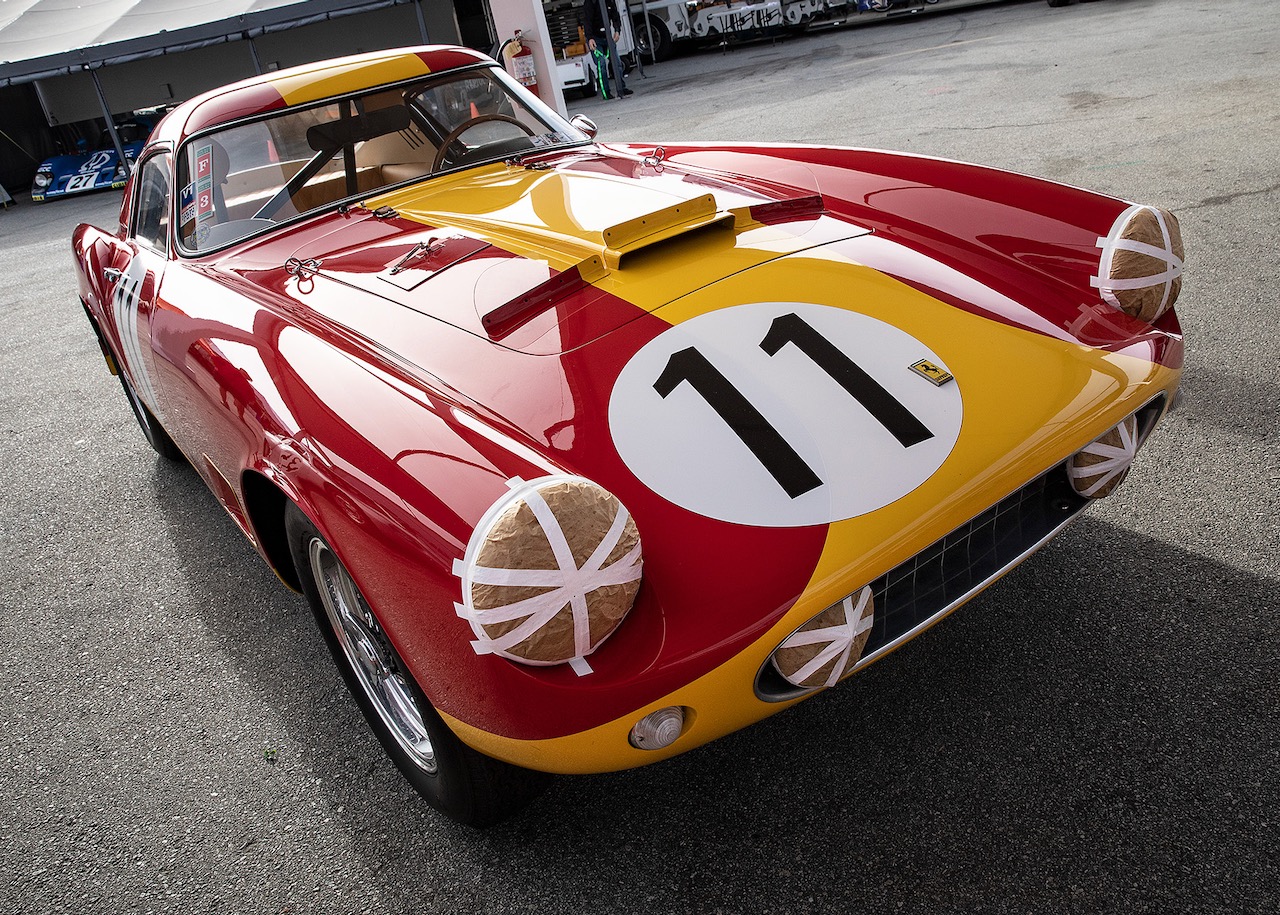 Don’t forget to add masking tape and brown Kraft paper to your race-prep tool box! It’ll come in handy when you enter your priceless Ferrari 250 GT Berlinetta TdF Coupe in an exhibition race at the Rolex Monterey Motorsports Reunion. This shiny red and mustard yellow example was a crowd pleaser in the Le Mans Centennial Heritage Display area. 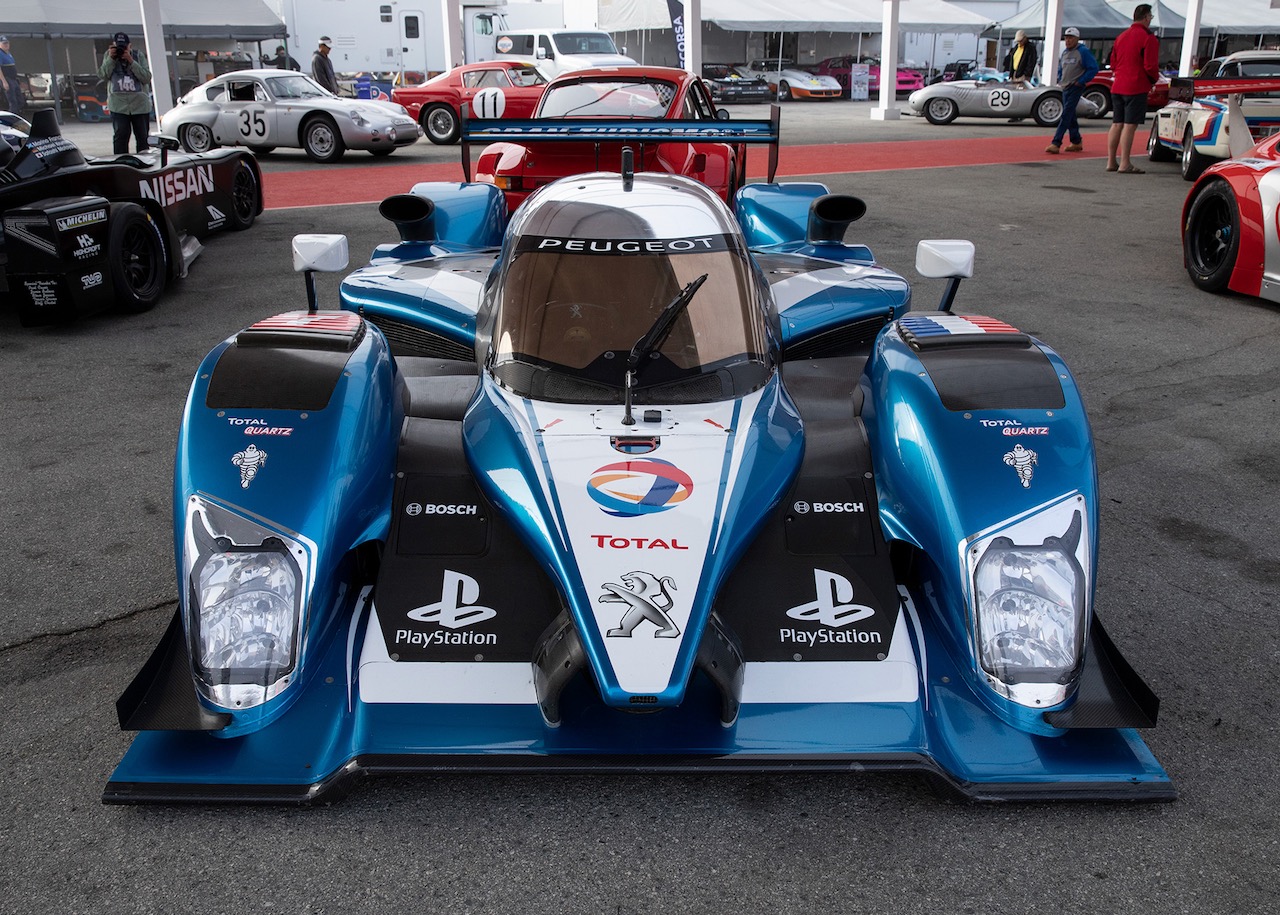 She’s drop-dead gorgeous and rather intimidating. No, I’m not talking about Supermodel Bella Hadid; I’m talking about this wicked Peugeot 908 HDi race car, owned and raced by David Porter. Every angle of this storied race winner oozes sexiness, power and unnerving superiority. It was yet another reason I spent so much time drooling over the 40+ cars I discovered in the Le Mans Heritage Display area during MONTEREY CAR WEEK: LET’S RACE. 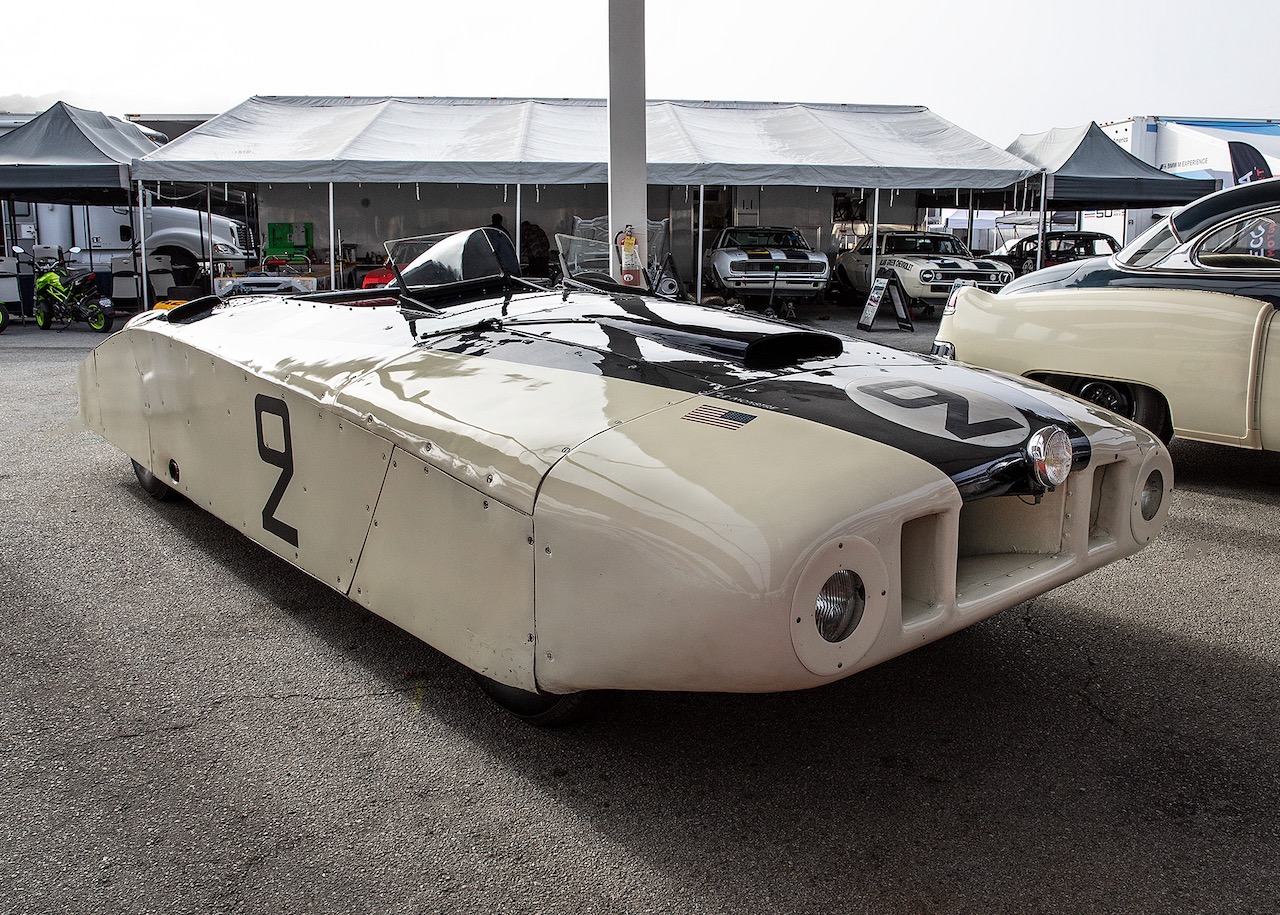 Speaking of sexiness, this Briggs Cunningham fielded 1950 24 Hours of Le Mans racecar has the kind of body only a mother or, in this case, a builder could love! It rides on a Cadillac Series 61 chassis and is powered by a Cadillac V8. Such beauty quickly earned this aluminum bodied endurance racer the nickname, “Le Monstre.” Grumman Aircraft Company assisted with the body design and fabrication. 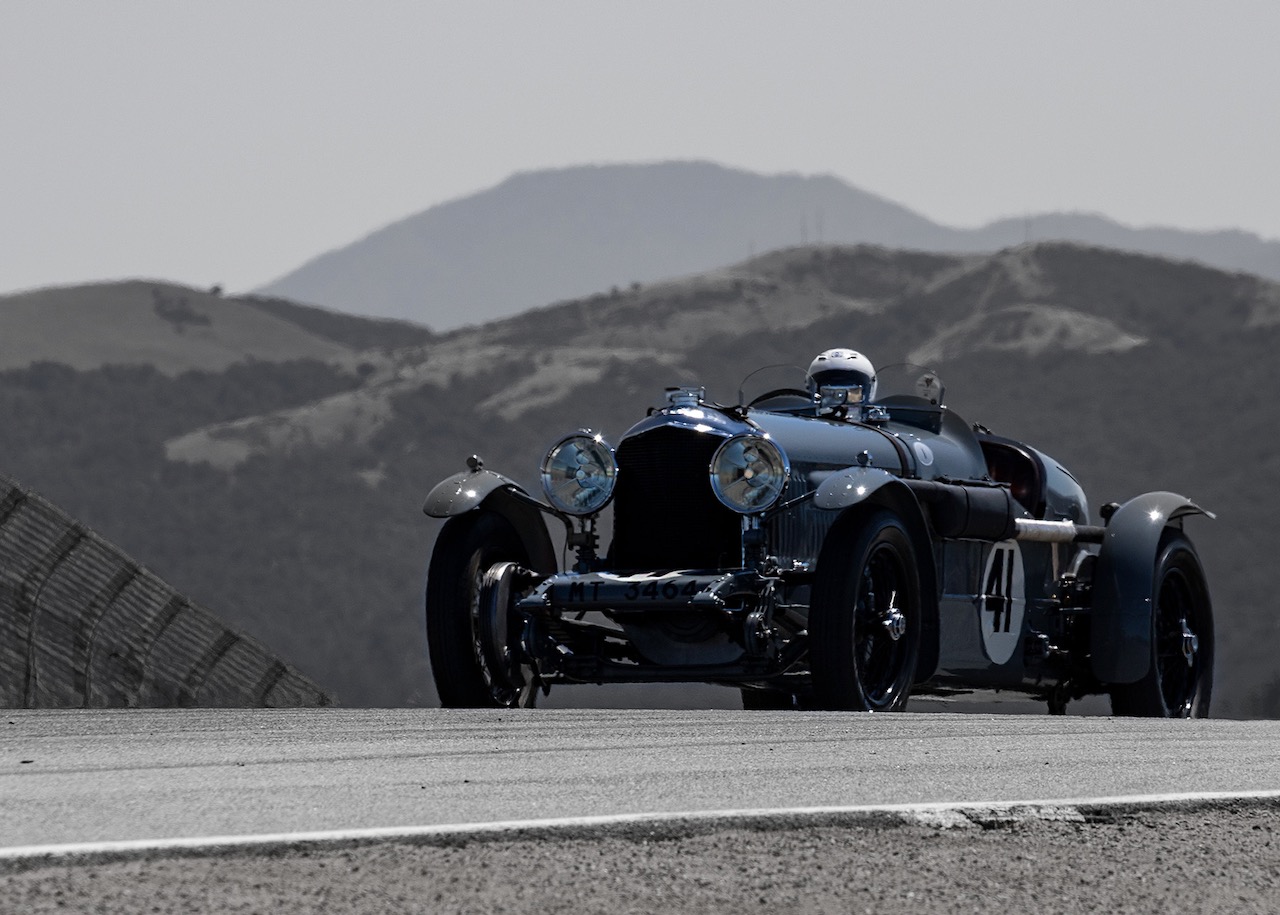 Belying its age and rising like Melville’s Moby Dick from the crest at Turn 7 is the large and in charge ‘29 Bentley Old Number One. To say this beautiful beast is legendary is an understatement – as it was the first racecar to win at Le Mans twice – winning in 1929 and again 1930. Its final race win was in 1931 at Brooklands. 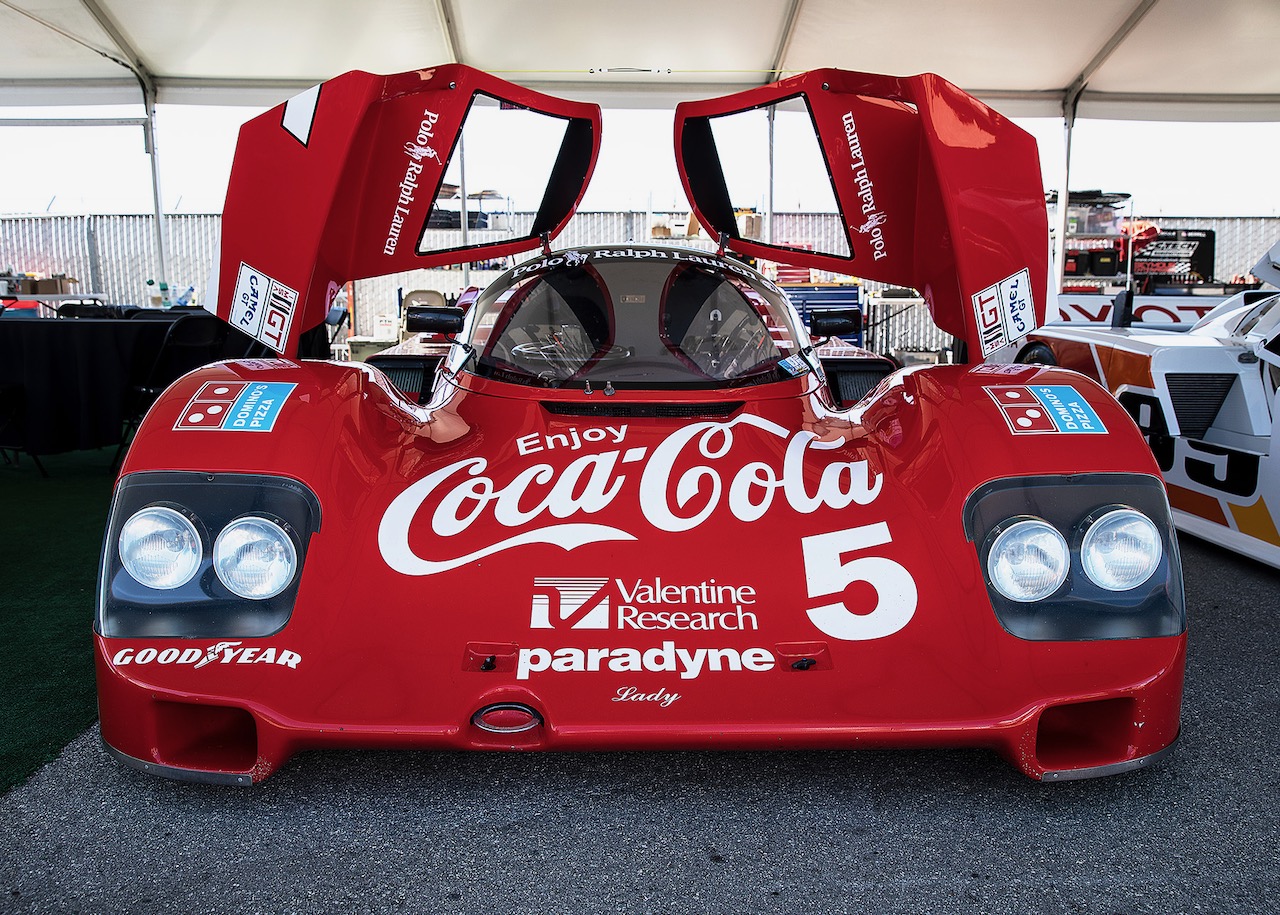 Back in 1963 advertising Creative Director Bill Backer penned the jingle, Things Go Better with Coke. Perhaps that was the unfair advantage Porsche was looking for with its Coke-liveried 962 GT. As the story goes, “Porsche built a single works 962 for testing and development purposes. It was entered for Mario and Michael Andretti in the 1984 Daytona 24 Hours race. As a sign of things to come, they easily qualified the car on pole with a margin of nearly two seconds over the next fastest car. Sadly, the race ended early for them due to a transmission problem.” Coke did not change its jingle to, “Things Sometimes Go Better with Coke!” 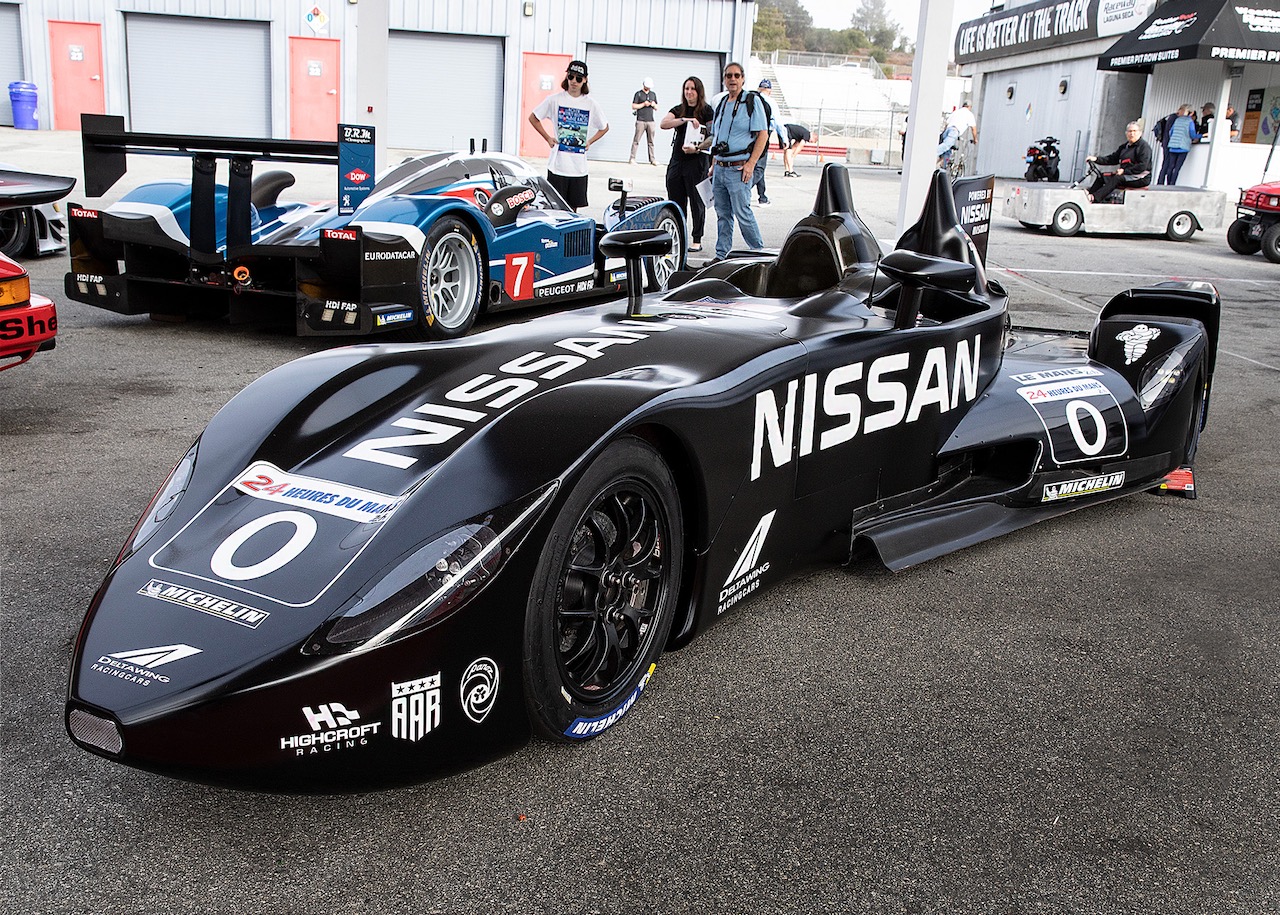 It is about half the weight, horsepower and aerodynamic drag of a typical Le Mans Prototype and in 2012, it thrilled Le Mans racing fans until it was pushed off the road by a Toyota prototype. It unfortunately could not recover to get back to the pits after a hard impact into the wall by the Porsche Curves. The Nissan DeltaWing was designed by Ben Bowlby and developed with the help of Dan Gurney, Chip Ganassi and Duncan Dayton.

Many thanks to the thousands of volunteers without who the fabulous Monterey Car Week shows and events, and MONTEREY CAR WEEK: LET’S RACE wouldn’t happen.

For more information about the Reunion, please visit  https://hsrrace.com/rolexmontereymotorsportsreunion2022/

Check out information about events at Laguna Seca @ https://www.co.monterey.ca.us/government/government-links/weathertech-raceway