We asked our man Jim Palam to paddle his way through MONTEREY CAR WEEK 2022 – THE AUCTIONS in a bid to hammer-down a Car Guy Chronicles’ Special Report. 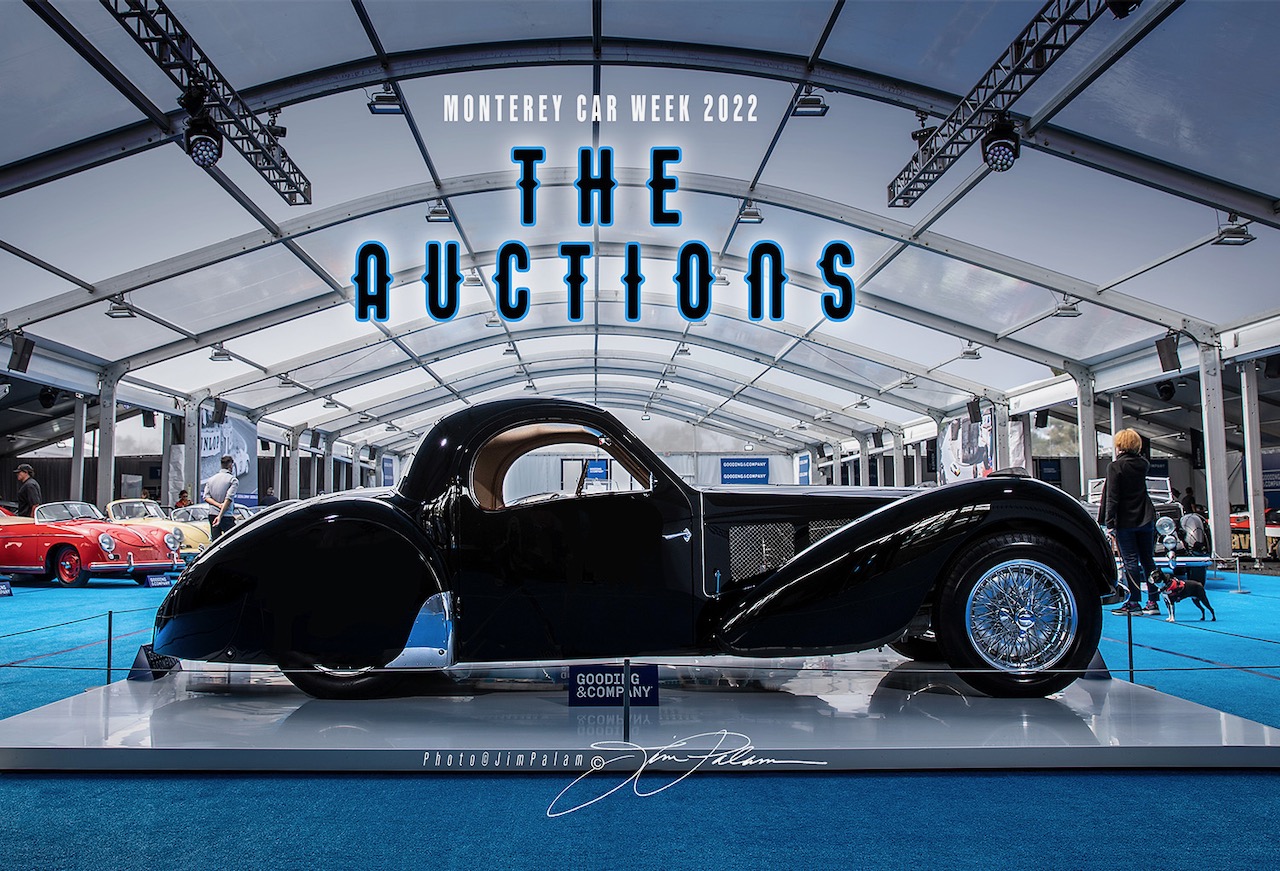 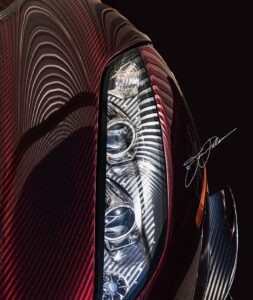 It is estimated that over 85,000 car enthusiasts made their way to California’s beautiful Monterey Peninsula from destinations near and far to enjoy the pomp, pageantry and pizazz of Monterey Car Week. While Car Week events, rallies, races, lectures and auctions put a strain on the Peninsula’s infrastructure and residents’ nerves, Monterey County saw an increase of over 10% from 2021 in hotel revenues – with a windfall of nearly $48 million. An additional $3 million was raised for local charities.

When it comes to Car Week Cabbage, the Big Bucks or Monterey Moola is banked at the auctions. While stalwarts Russo & Steel and Worldwide auctions did not participate this year, biggies RM Sotheby’s, Gooding & Company and Mecum did – along with Bonhams Quail Lodge Auction and newcomer Broad Arrow Auctions, which had been acquired by Hagerty for over $100 million. After all the champagne had been enjoyed, revenues from MONTEREY CAR WEEK 2022 – THE AUCTIONS topped $470 million. *

One of the top sellers during car week was the exquisite ‘37 Bugatti Type 57SC Atalante featured here as our lead photo. One of just 17 produced, it sold for $10,345,000 at Gooding & Company’s Pebble Beach auction. Gooding’s total revenues for the week were $109 million.

Over the years I’ve realized that one of the factors that distinguish high-end automotive gatherings like Monterey Car Week from other car-related events is the details. Take this close-up look at the Koenigsegg Regera headlight array in our inset shot for example: It’s beyond functional, beyond stunning; it’s hypnotizing. When something is so cleverly devised, so beautifully conceived and realized it becomes more than an object, more than an encounter – it becomes a mind-altering experience. And when so much attention is given to all the details it helps to explain why people spend so much time, energy, and money to experience Monterey Car Week. 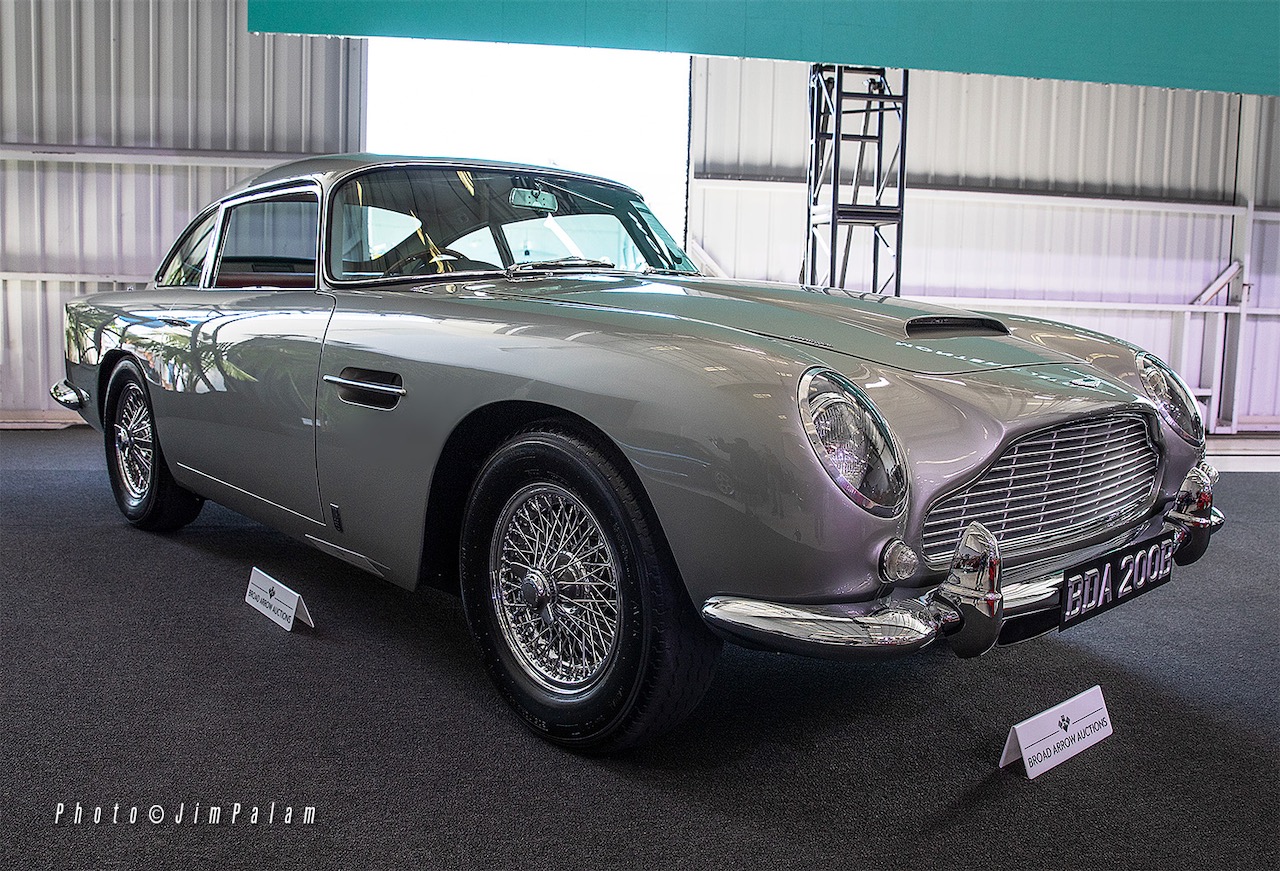 Offered for sale by the Estate of Sir Sean Connery at the Broad Arrow auction, this all original ‘64 Aston Martin DB5 sold for an impressive $2,425,000. This unmolested ‘Bond’ car was owned by Connery until his death in 2020. Proceeds from the sale will be used by the Sean Connery Philanthropy Fund. 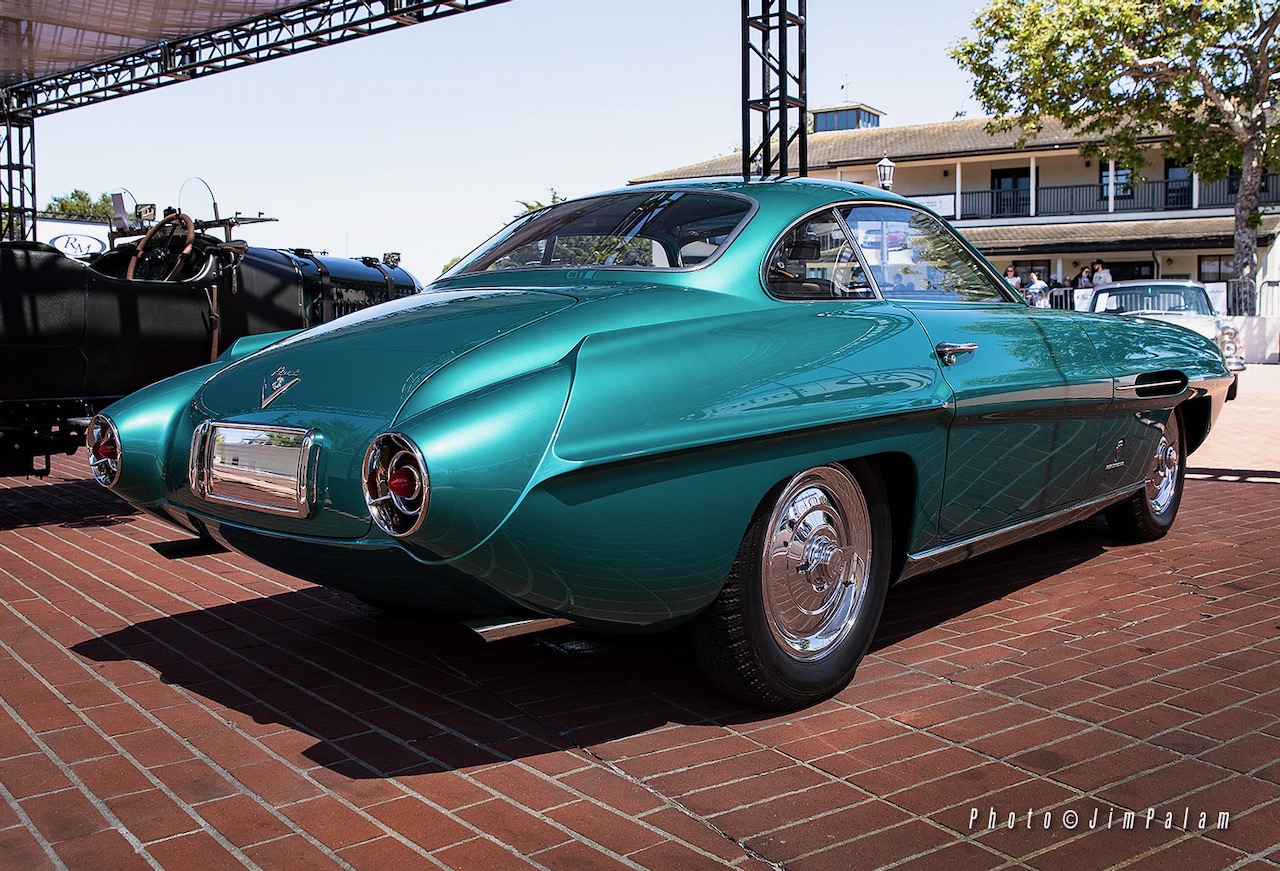 It was far from the most expensive car sold at the MONTEREY CAR WEEK 2022 – THE AUCTIONS, but it is one of my favorites. One of only 14 examples ever built, this meticulously restored ‘53 Fiat 8V Supersonic by Ghia was shown at the 1957 Pebble Beach Concours d’Elegance, and here, 65 years later, it was in full-finned glory at the RM Sotheby’s auction staging area. I wasn’t the only one who loved this Supersonic; it hammered at $2,040,000! 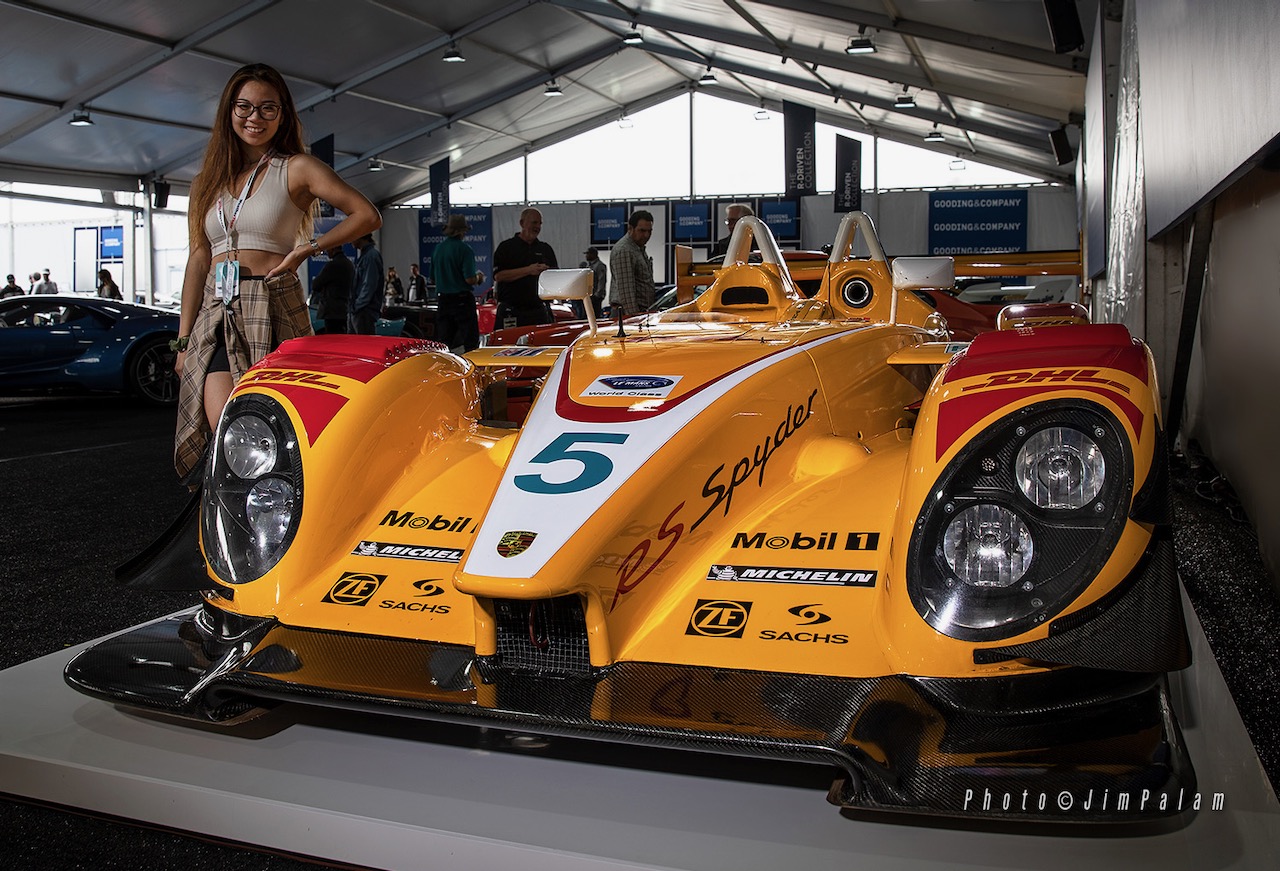 I met this beautiful young lady at the Gooding & Company auction. She was closely inspecting this race-winning ‘07 Porsche RS Spyder EVO which went on to sell for $5,615,000. Turns out her dad is the first Asian to own a North American Porsche dealership. Her enthusiasm and knowledge of all things Porsche was beyond impressive. 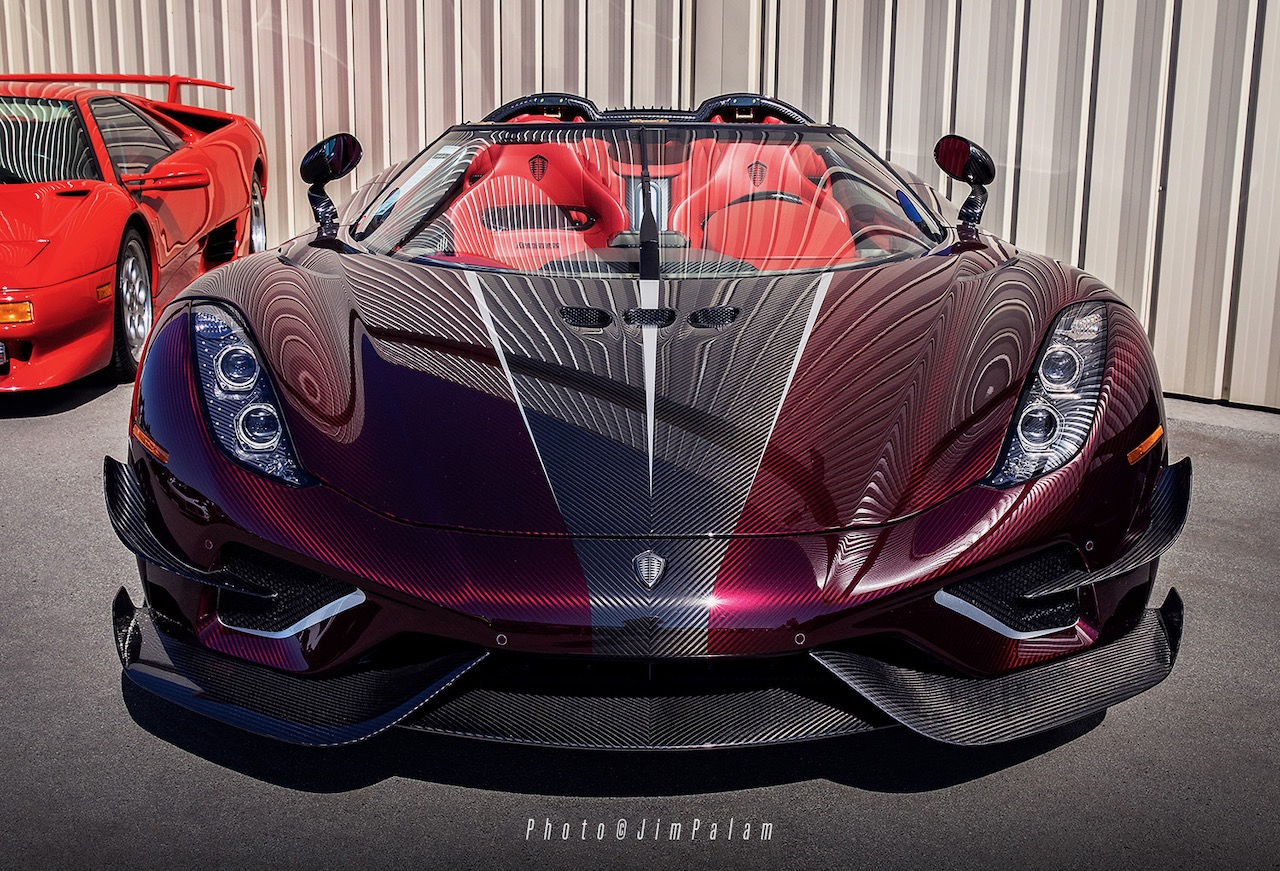 “Look closely into my headlights. You are getting sleepy. When you awake you will have paid over $3 million to buy me at the Broad Arrow Auction.” I’m not sure that this ‘19 Koenigsegg Regera was sold on auction day, but there is no denying its ability to hypnotize. Jaw-dropping specs like 251 mph top speed, $235,000 for its Red Tinted Carbon Fiber body option, and another $145,000 for its optional high-downforce Ghost Package performance kit. Yowza! 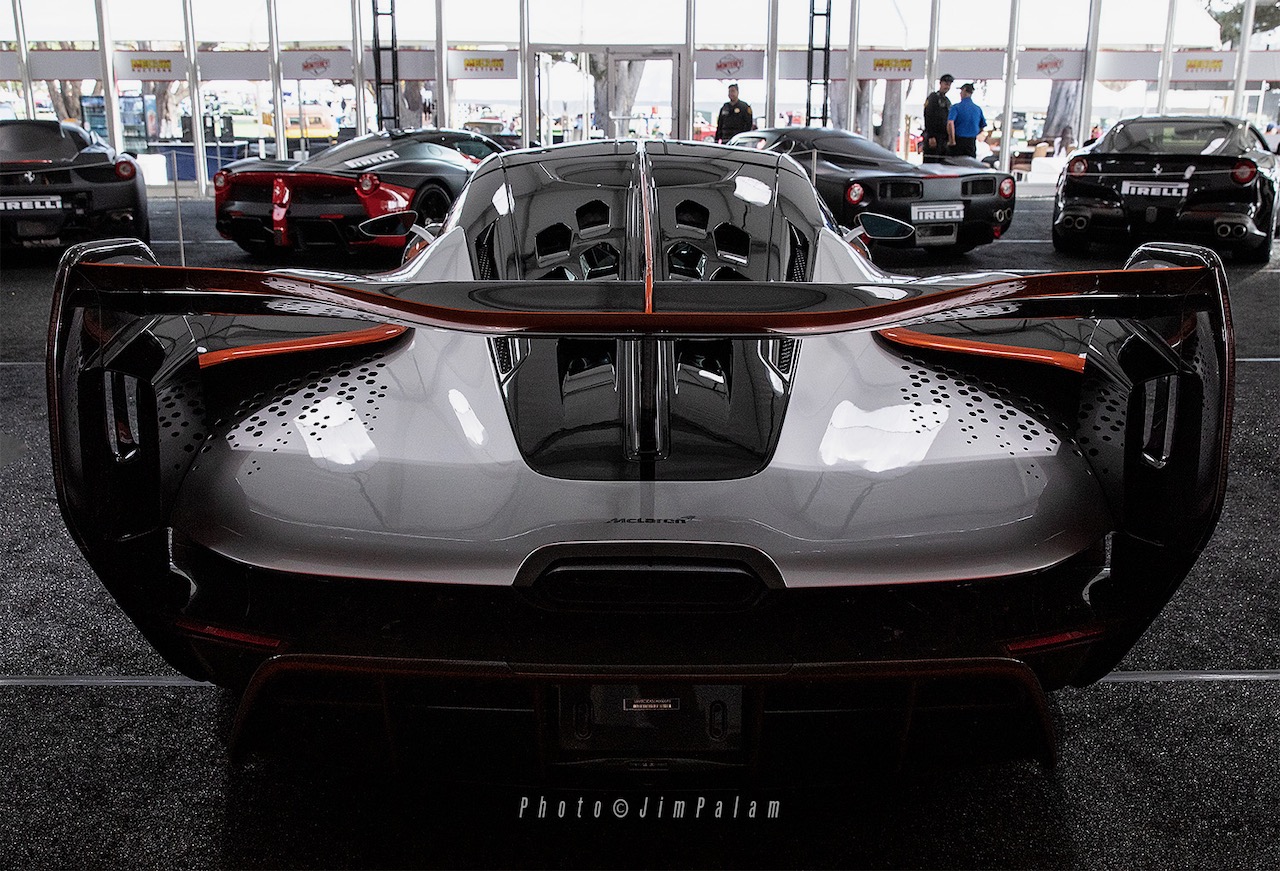 You are looking at the sexy tail end of a limited-production ‘20 McLaren Sabre. It was launched in late 2020 as the most powerful non-hybrid road car ever produced by McLaren. Features include a stealth Iconel exhaust, Gorilla Glass engine cover, 824 horsepower Twin-Turbo V8, 7-speed dual-clutch transmission, 218 mph top speed, and $3+ million price tag. This Hypercar was one of the featured cars at the Mecum auction. 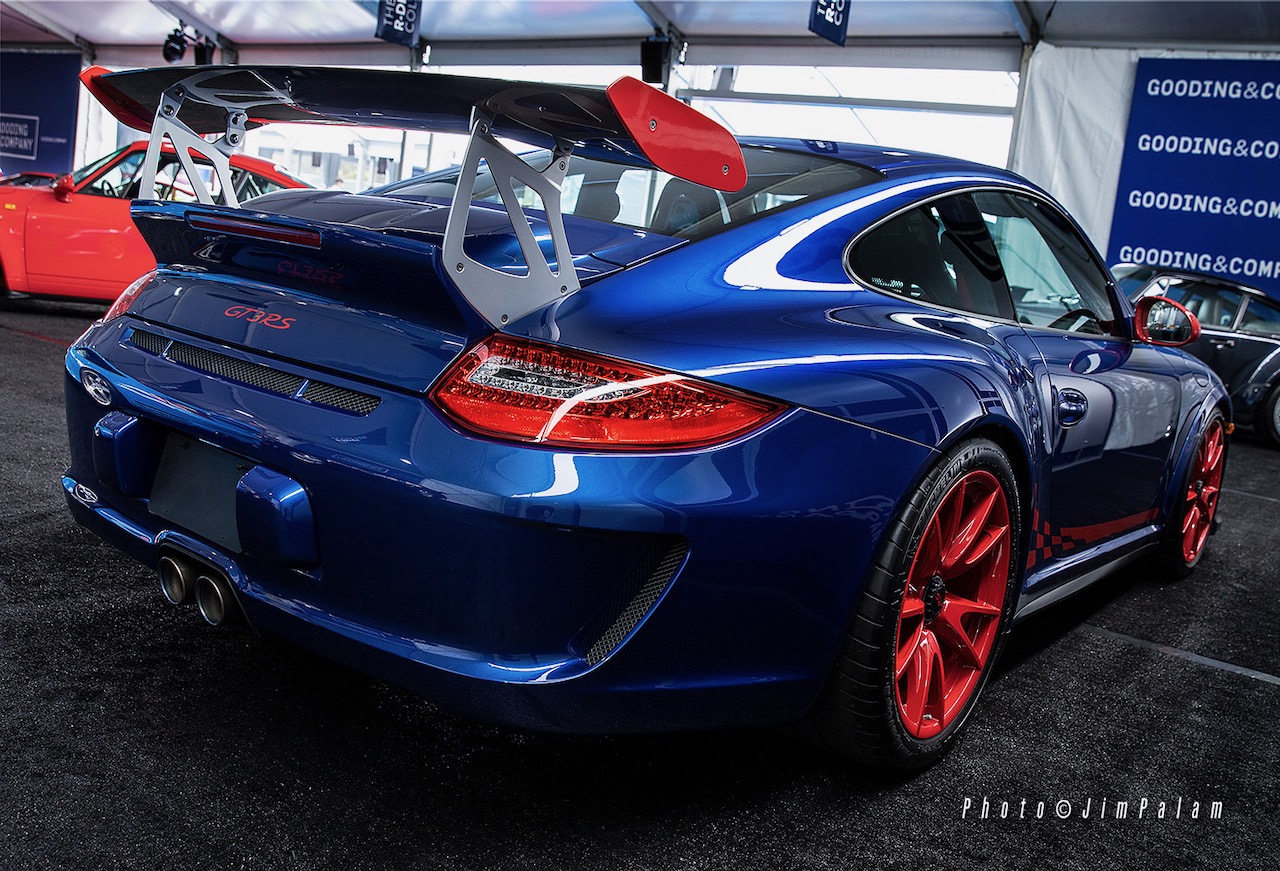 Described by Automotive Press International as “the best driver’s 911 yet,” this 450-horsepower ‘10 Porsche 997 GT3 RS 3.8 is finished in ultra-rare Aqua Blue Metallic with Guards Red wheels and graphics. It was hard to miss on display at the Gooding & Company auction and it easily surpassed its $250,000 to $300,00 auction estimate – hitting $368,000 at the hammer. 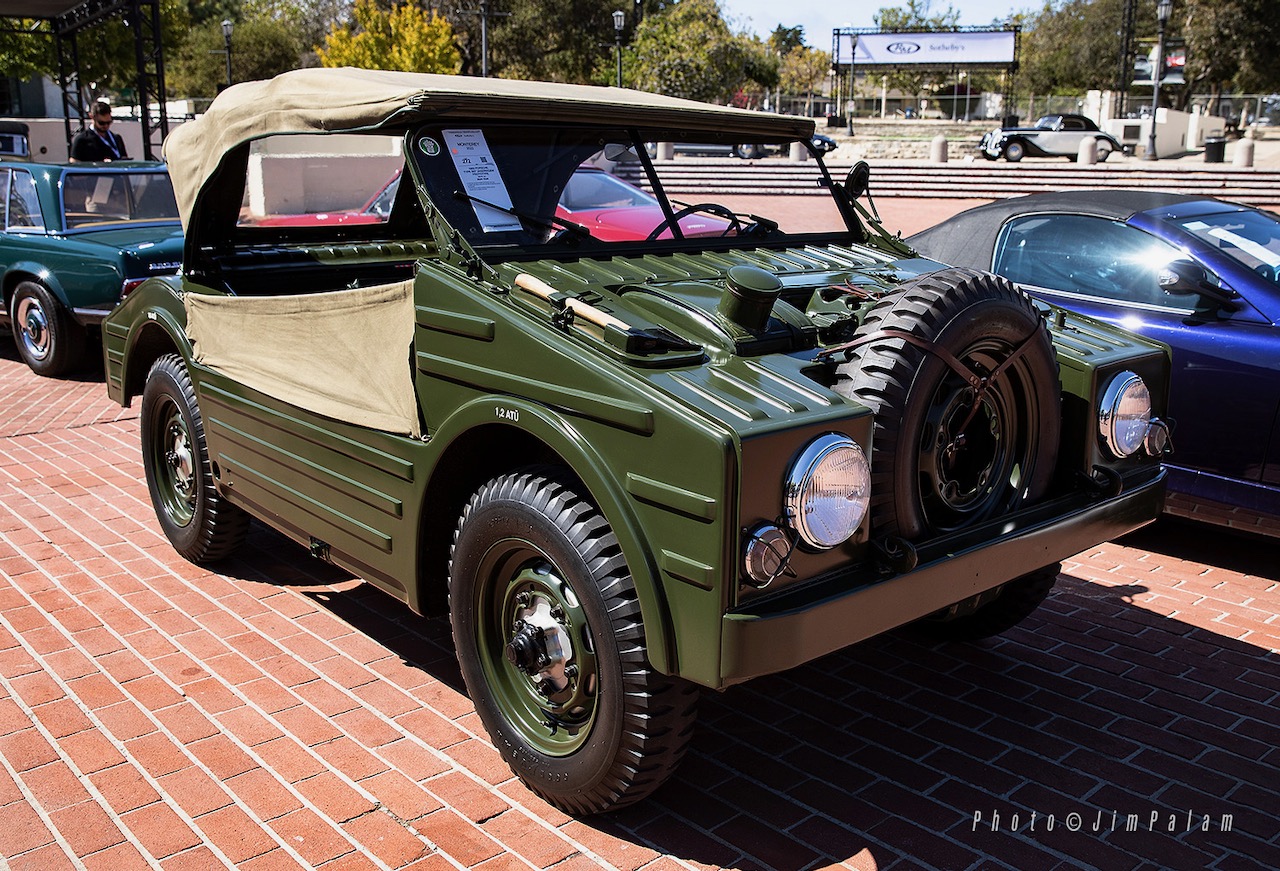 You may be thinking “What is this ‘thing’? Well, is not a Volkswagen but it is German and it’s one of just 22 military prototypes produced by Porsche in 1953. This Porsche Type 597 Jagdwagen is a very rare, all-wheel drive, light military vehicle powered by an air-cooled, flat four engine derived from the venerable 356 sports car. Its tall, amphibious design made it a great hill-climber and stream-crosser. It sold for a whopping $665,000 at RM Sotheby’s auction. 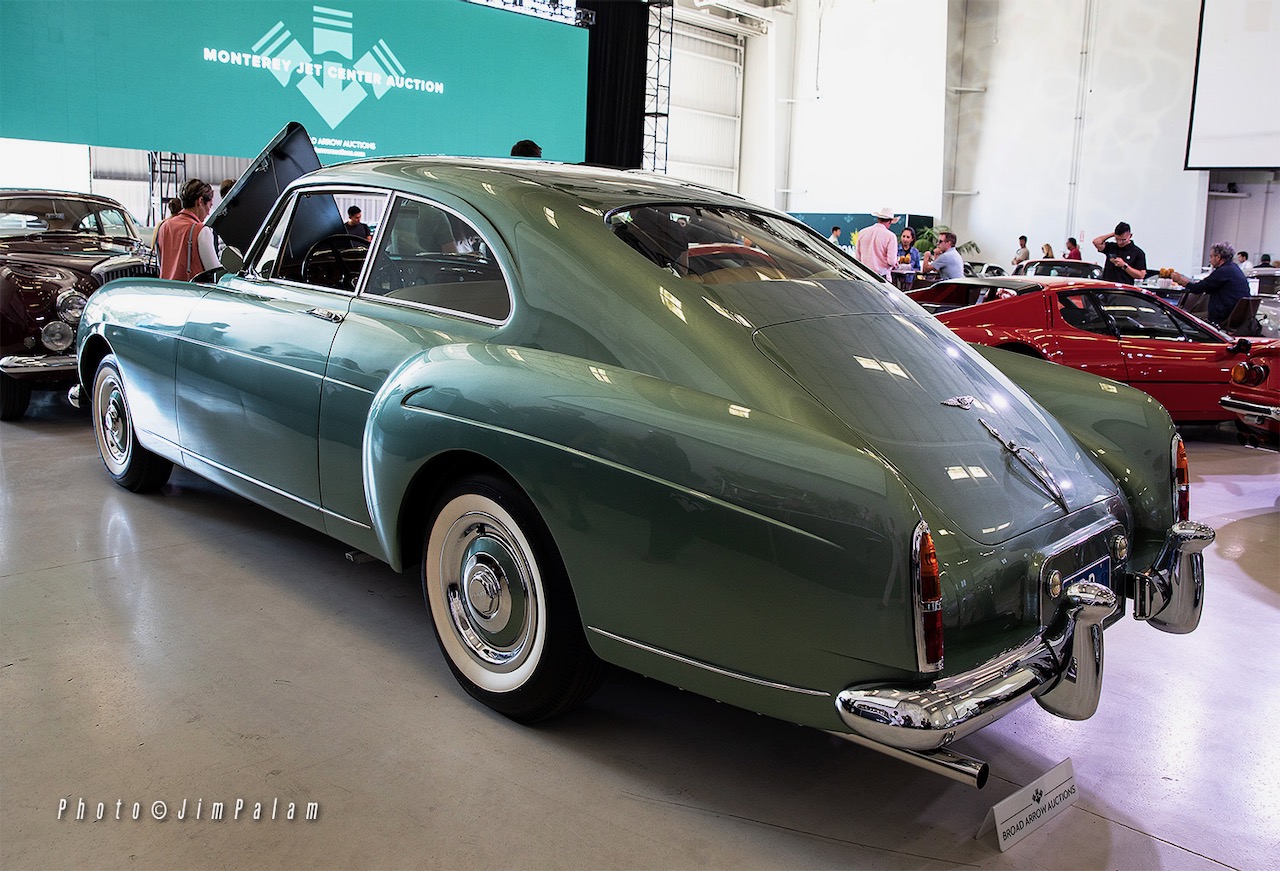 If you ever feel like donning an Ascot and taking a comfy drive through the English countryside, this elegantly understated ’57 Bentley Continental S.1 Fastback Sports Saloon would be a proper choice for your excellent excursion. This classic received a comprehensive and complete Pebble Beach standards restoration by Vantage Motorsports and sold with extensive documentation for $1,215,000 at the Broad Arrow auction. 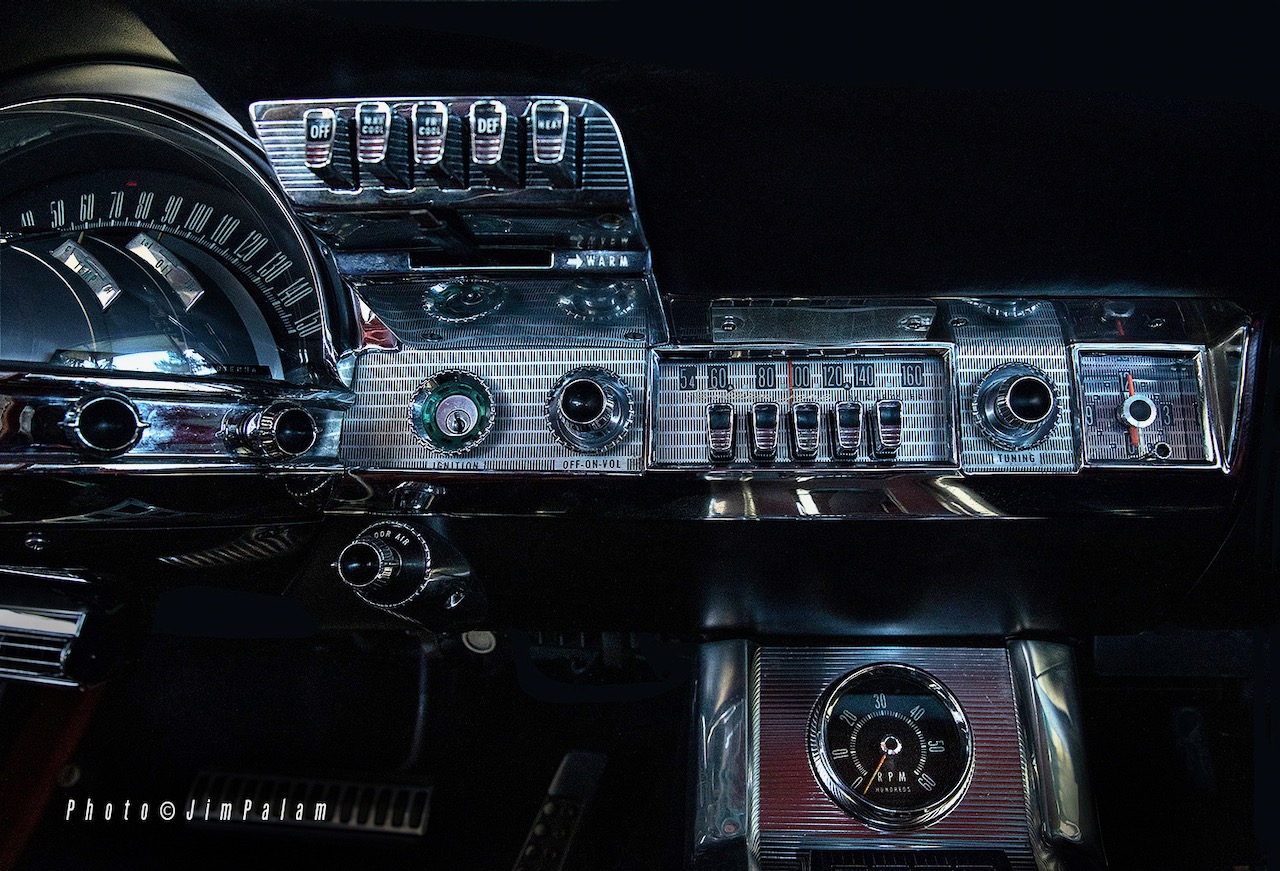 With a powerful cross-ram induction, dual carb Wedge V8 engine, this ‘61 Chrysler 300G’s interior offers a shiny display of push-button controls for features like its automatic transmission and radio presets. Facing the driver, the AstraDome’s instrument cluster is crowned with a 150-mph speedometer, and capping the long center console is an analog tachometer. Other shiny dials and knobs control cabin climate, a remote mirror, and electric clock. You were Fast and Fancy in 1961 if you drove a Chrysler 300G! 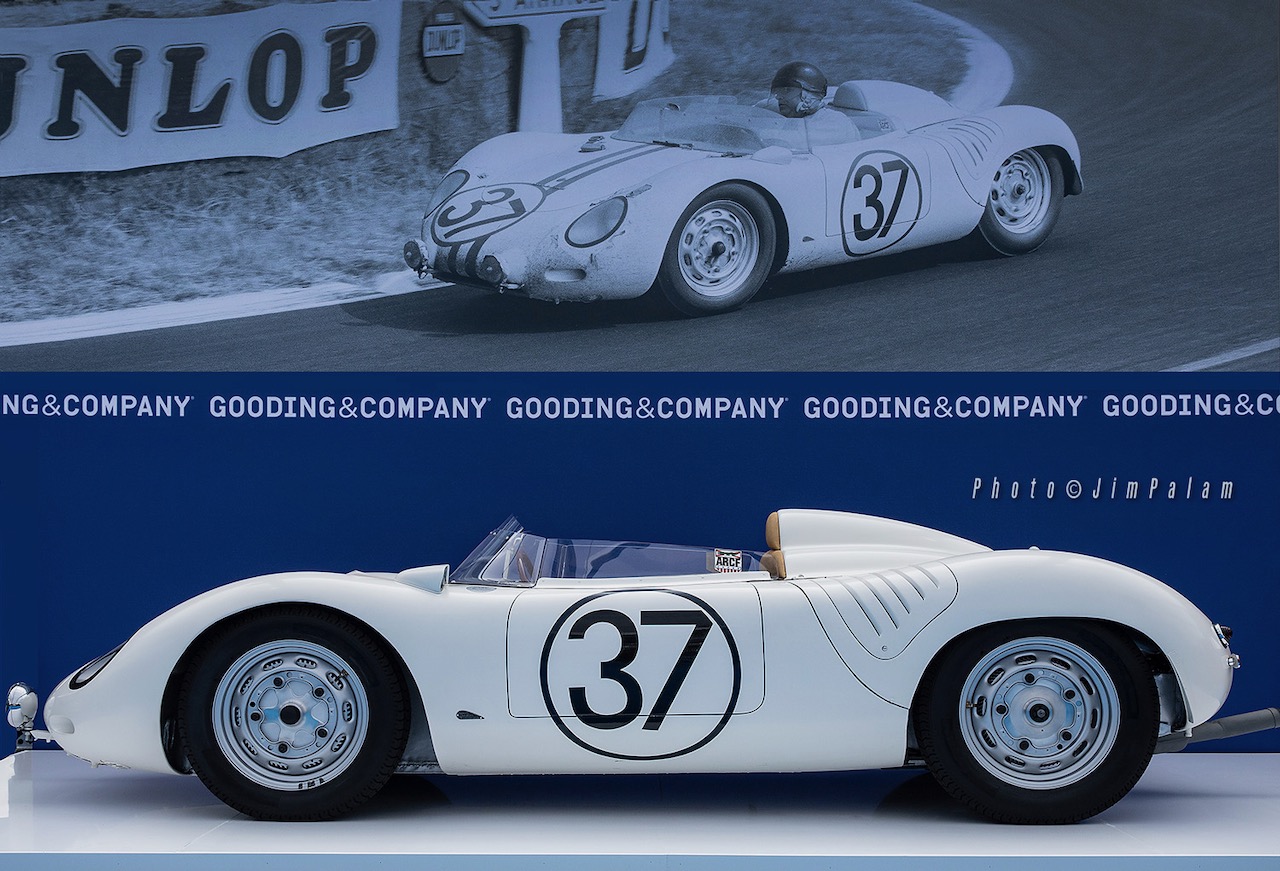 One of the featured cars at the Gooding & Company Pebble Beach auction was this ’59 Le Mans competitor, a Porsche 718 RSK owned and raced in 1959 by privateer Ed Hugus. The story in racing circles is that the car was delivered to Hugus in silver, but was repainted trackside in white lacquer with blue stripes and numbers, the same livery recreated during its restoration and pictured here. Auction estimates were for a hammer price of between $4,500,000 and $5,500,000, but it appears that its reserve was not met. 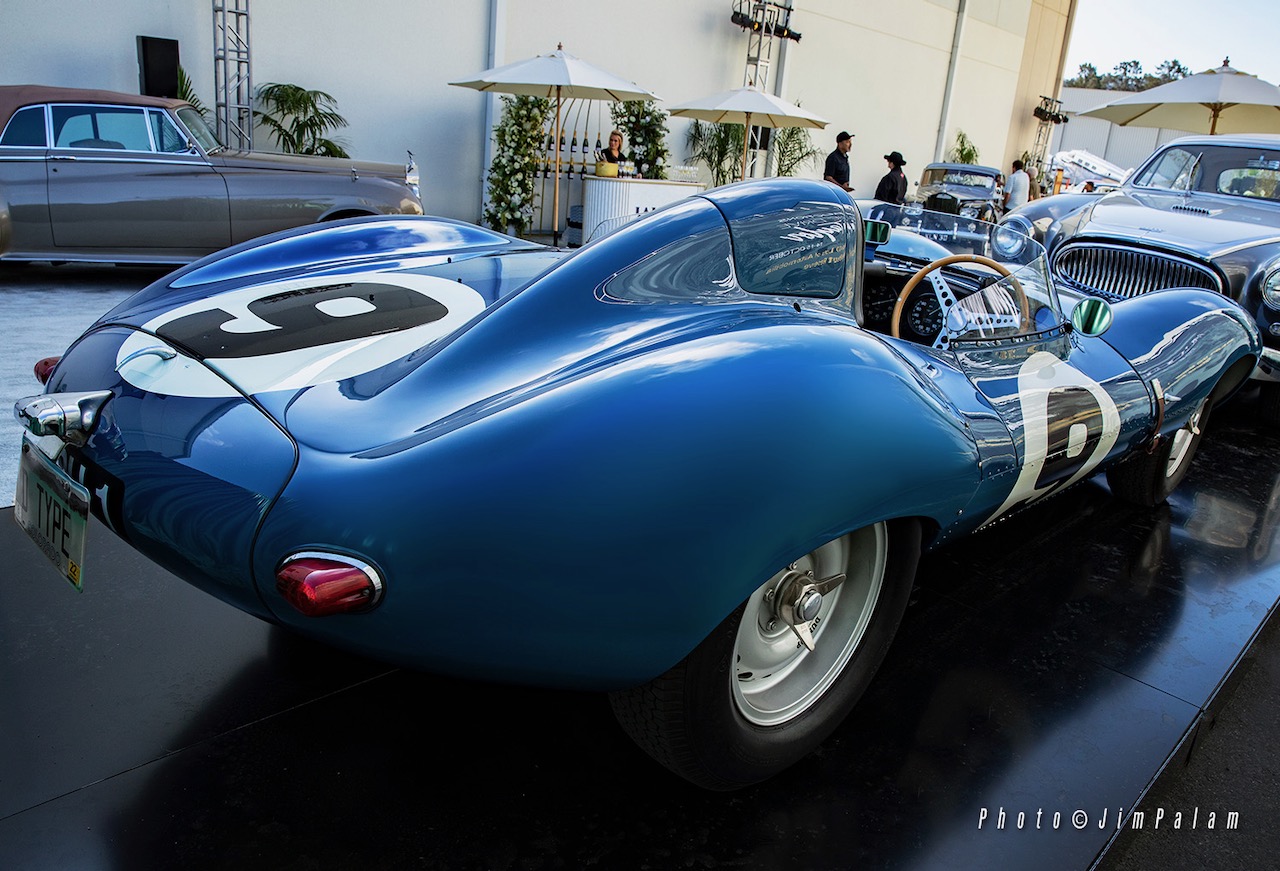 On display by the entrance gate at the Broad Arrow auction was this fast and curvy ‘55 Jaguar D-Type XKD 515 that will be offered without reserve at the upcoming The Cars of Jim Taylor auction. This single-owner offering will include 120 cars from Jim’s famous collection of some of the world’s finest European, British and American sports cars. This upcoming auction will take place in October in Gloversville, NY, Jim’s hometown. 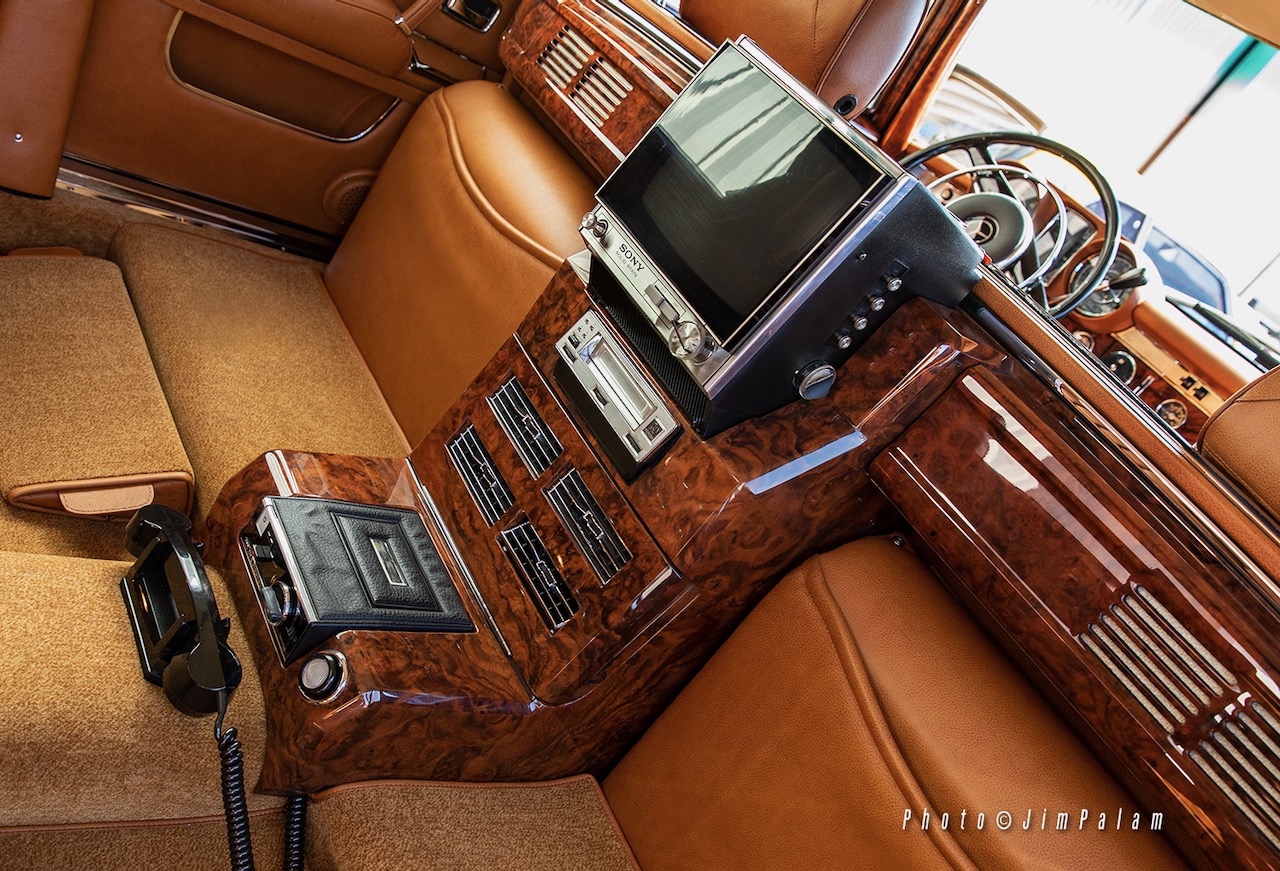 Where were you in 1971? If you were a Head of State, a Captain of Industry or perhaps a Rock Superstar you may have been in the spacious and tricked-out passenger area of a Mercedes Benz 600 Pullman LWB Six-Door Landaulet. I discovered this stretchy example at the Broad Arrow auction. It was first owned by the Democratic Republic of Congo and features a telephone, intercom, tape recorder, and a Sony television. 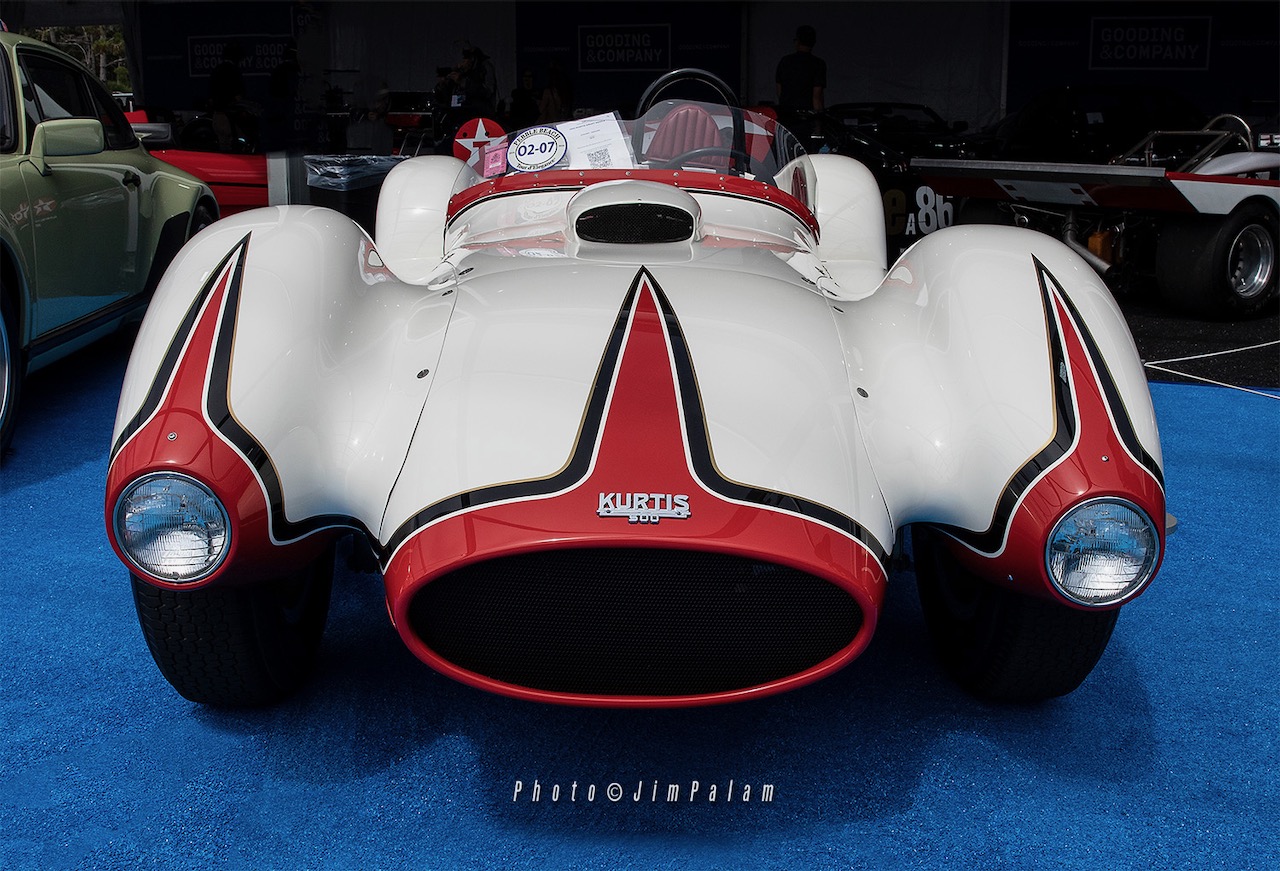 As unique and historic as it is, this ‘62 Kurtis-Kraft Aguilla did not sell at the Gooding & Company Pebble Beach auction. A two-time Concours d’Elegance class winner, the Aguilla is the final racing car built by Frank Kurtis. It features transformable bodywork, a 400-horsepower tri-carb 327 Chevy V8, a 4-Speed Borg-Warner T-10 gearbox, and a Halibrand quick-change rear. 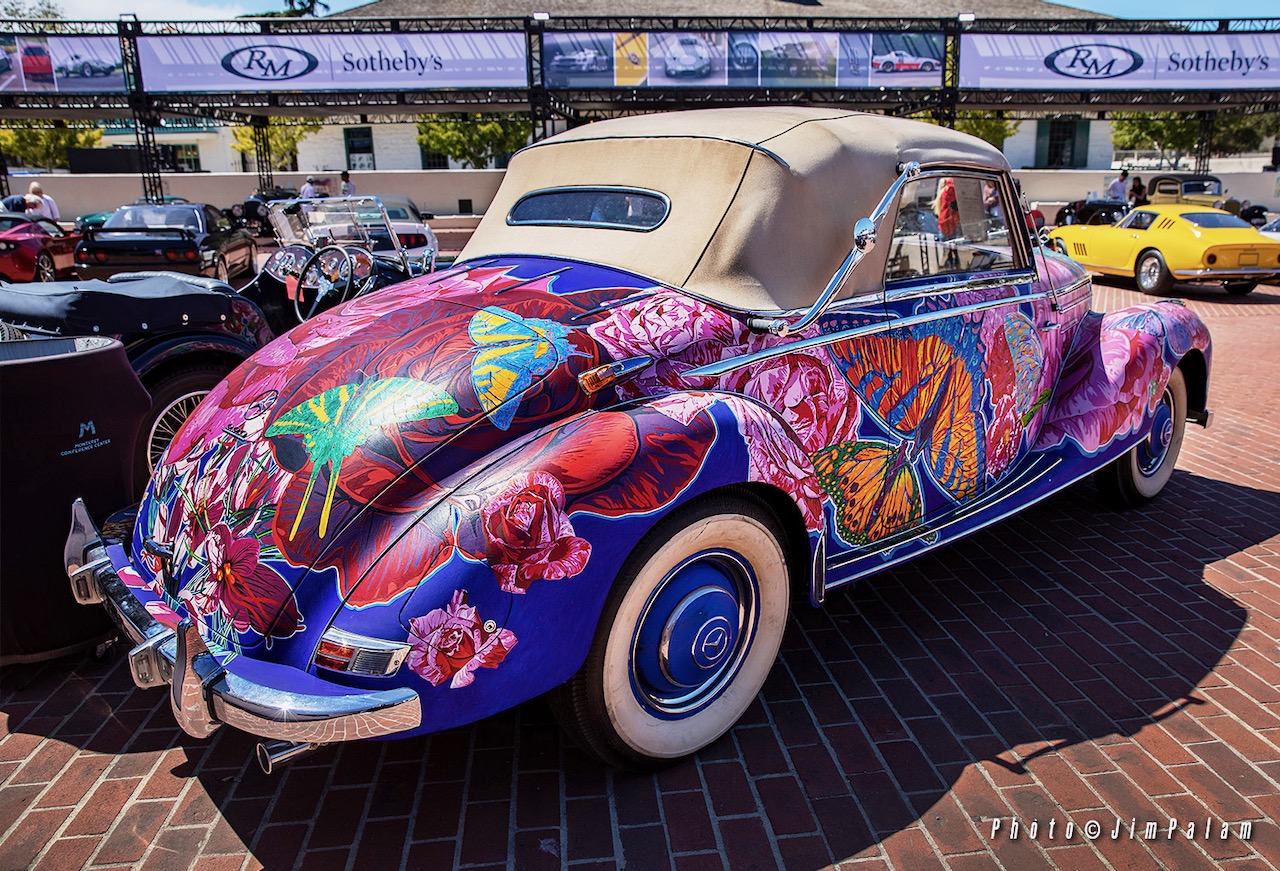 The line between art & design is sometimes a blurry one, or in this case, a colorful one. This hand-painted ‘52 Mercedes-Benz 220-A Cabriolet was part of silkscreen artist Hiro Yamagata’s renowned Earthly Paradise series that was exhibited internationally in the mid-1990s. Yamagata completed more than 20 of these head-turning art cars in a style that was often labeled ‘dreamy & psychedelic.’ I thought this would be the perfect car to end our MONTEREY CAR WEEK 2022 – THE AUCTIONS trip. Thanks for riding along!

*Per Hagerty’s Monterey Car Week 2022 Auctions report this year’s combined auction sales of $470M topped the previous record high of $394.48M set in 2015. Their insightful report also confirms that tastes and demographics are changing, showing modern sports and Supercars selling extremely well and that younger collectors are transforming the market. Check it out @https://insider.hagerty.com/trends/monterey-has-wrapped-at-456-1m/