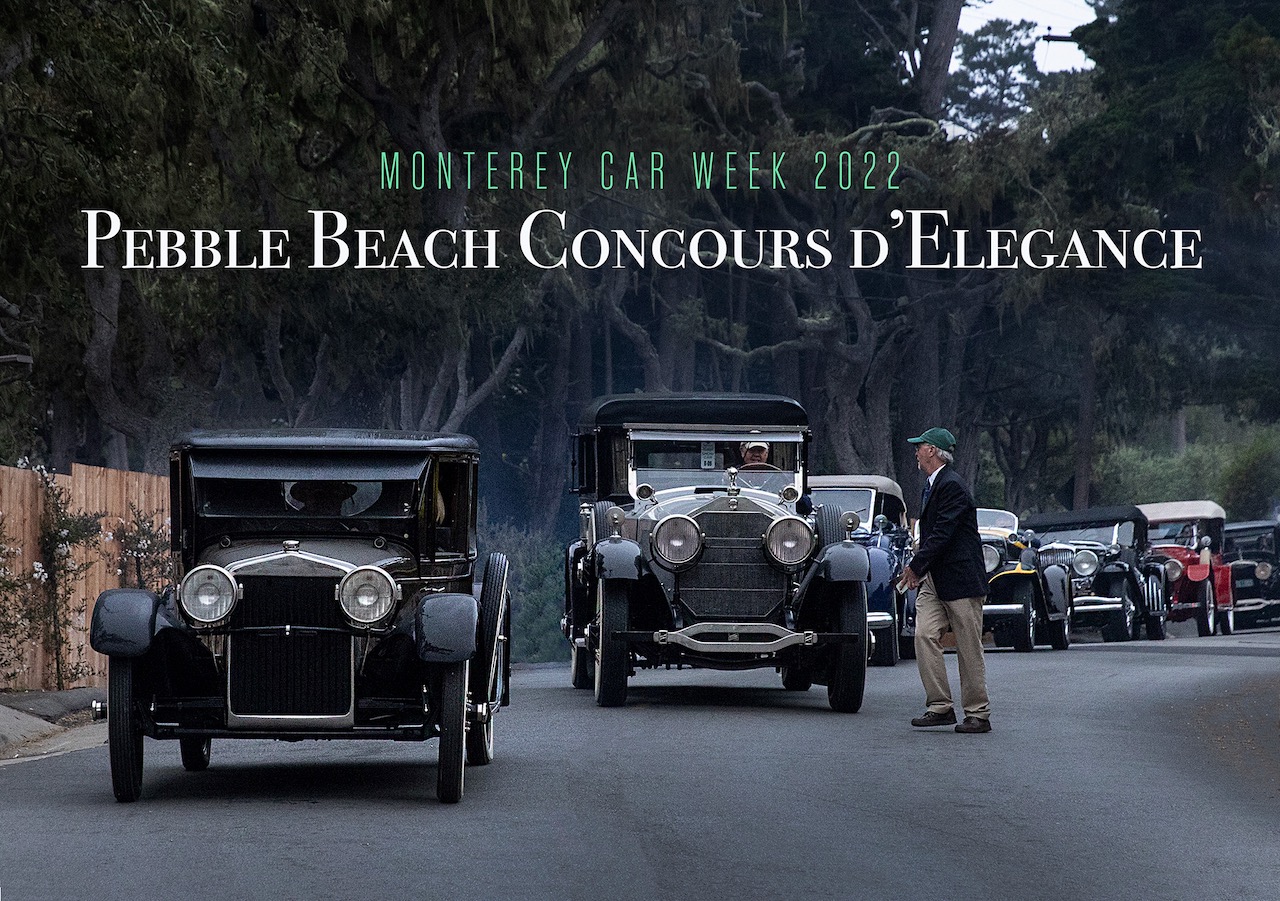 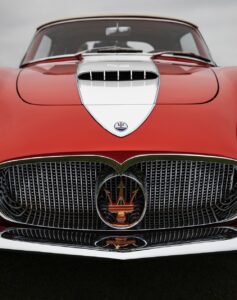 David Stivers, the Chief Executive Officer of the 71st Pebble Beach Concours d’Elegance reminds us in the event catalog’s introduction letter that this historied and lauded event is an ‘Elite Competition’. Yes, it’s a showy-show known as much for its champagne flutes and celebrities as it is for its priceless coachwork and racing pedigrees. But it’s also clear to everyone attending that this gathering of the Best of the Best is indeed a full-blown competition – be it for event tickets, parking spaces, judges’ approvals or media’s spotlights!

Having covered Pebble Beach multiple years for Car Guy Chronicles I’ve learned that you have to get there very early to get shots of the cars before they are surrounded by spectators and judges. So, I arrived with the heavy morning dew, just as a parade of show cars were making wide turns into the entry gate, and the Prancing Horses were still draped in plastic covers on the Concorso Ferrari field on the First Tee.

This year’s heavily attended Concours celebration included Centennial Celebrations for Lincoln and the 24 Hours of Le Mans – as well as additional features on vintage era McFarlands, Talbot Lagos, Alfas and the 90th Anniversary of the iconic ’32 Ford. Across from the ’32s was a fascinating display of cars with Unorthodox Propulsion Systems.

Now Car Guy Chronicles Editor and Publisher Martyn Schorr typically gives me free reign when covering motorsports events for his popular blog, but this year he did ask that I “Find the GT40s & Mark IVs” – since these elusive Le Mans survivors keep a pretty low profile (no pun intended) during typical car show seasons. I’m happy to report that I did find a very special Mark IV and my photo of it with a racing celebrity is in this report! So, without further ado, we are excited to present to our loyal and new readers, 16 standouts and highlights from MONTEREY CAR WEEK 2022: PEBBLE BEACH. 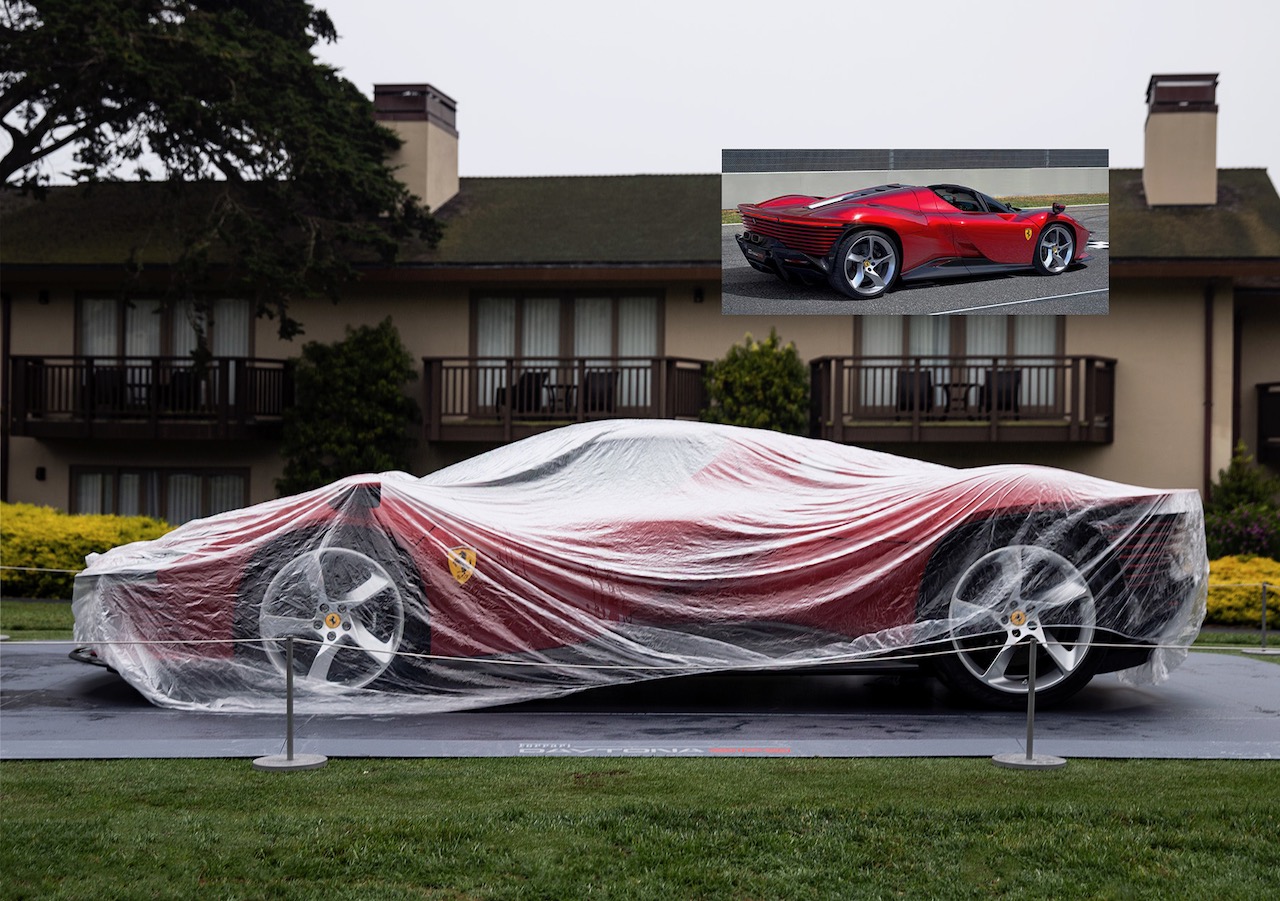 It would be impossible to present just one extraordinary classic Ferrari from the large and impressive Concorso Ferrari field on the First Tee – but there was something drawing me to this plastic-draped Ferrari Daytona SB3. Design of this young Prancing Horse was inspired by the sports-prototype racers that won the 1967 Daytona 24 Hours race. The inset photo showing the undraped car is courtesy of Ferrari. 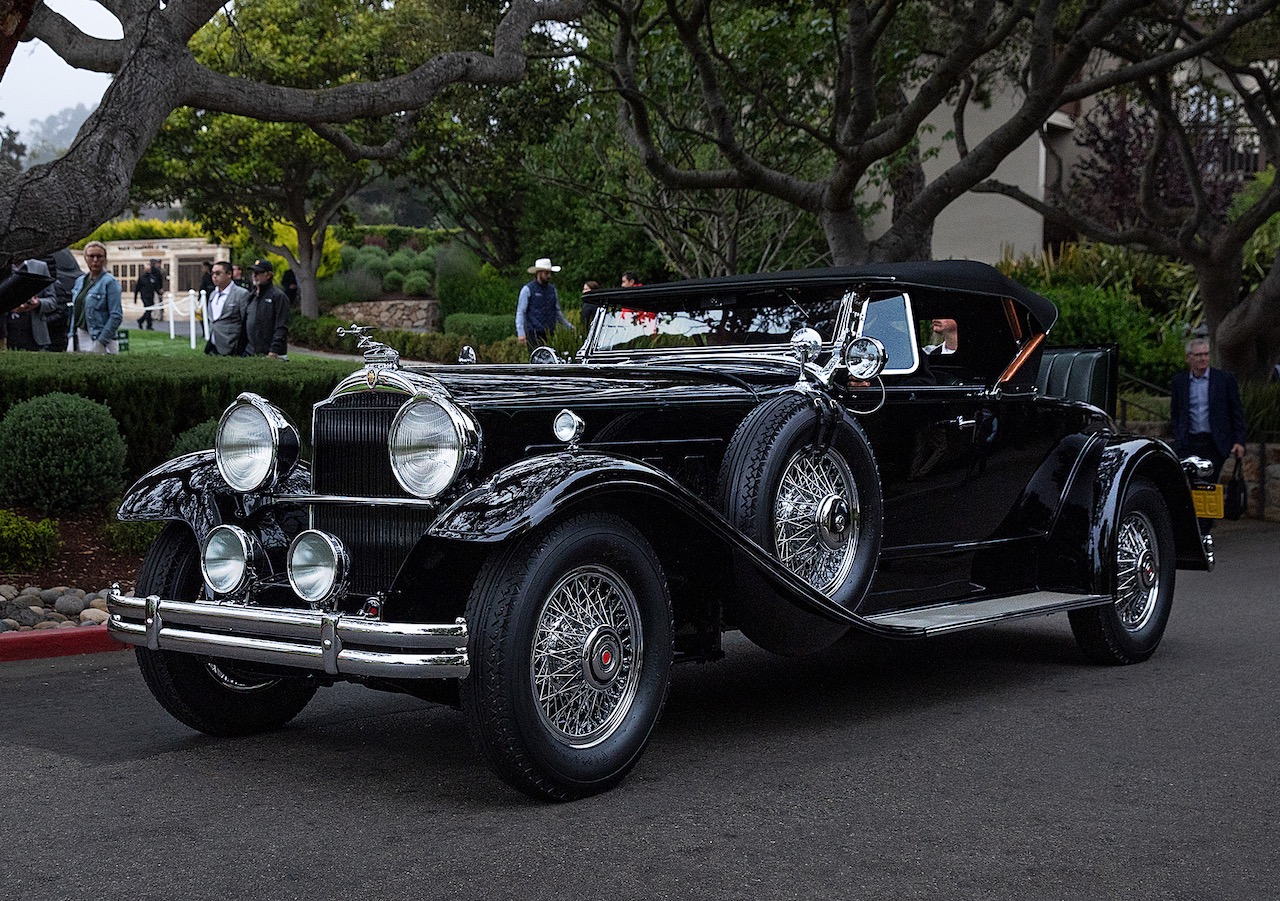 The early bird catches the Packard! One of the many advantages of arriving early at Pebble Beach is catching elegant icons of motoring history rolling quietly and confidently in front of The Lodge before entering the show car field. A small but alluring detail of this ‘30 Packard 745 Deluxe Eight Roadster is its Goddess of Speed hood ornament. This rumble seat roadster is owned by Joseph and Margie Cassini III of West Orange, NJ. 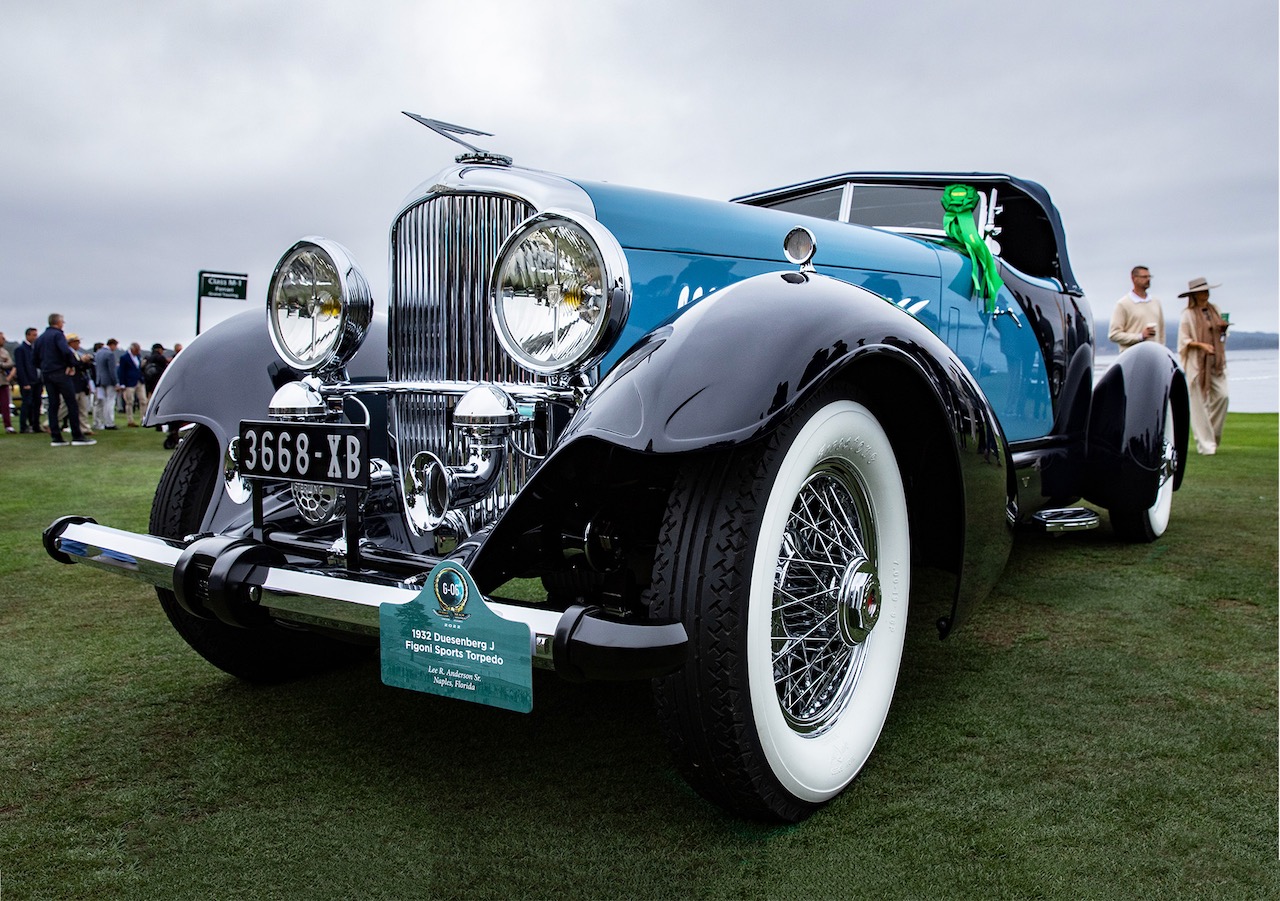 The judges voted – and this year’s Best of Show honors went to the long, sleek and boattailed ‘32 Duesenberg J Figoni Sports Torpedo! Duesenberg chassis 2509 was shipped to famed coachbuilder Joseph Figoni who, with the artisans at Sadovich’s Motors Deluxe of Paris, created this timeless piece of rolling art. And roll it did, with Sadovich driving the car in the 1932 Paris-Nice Rallye before delivering it to its first owner, Peruvian sugar heir Antonio Chopitea. 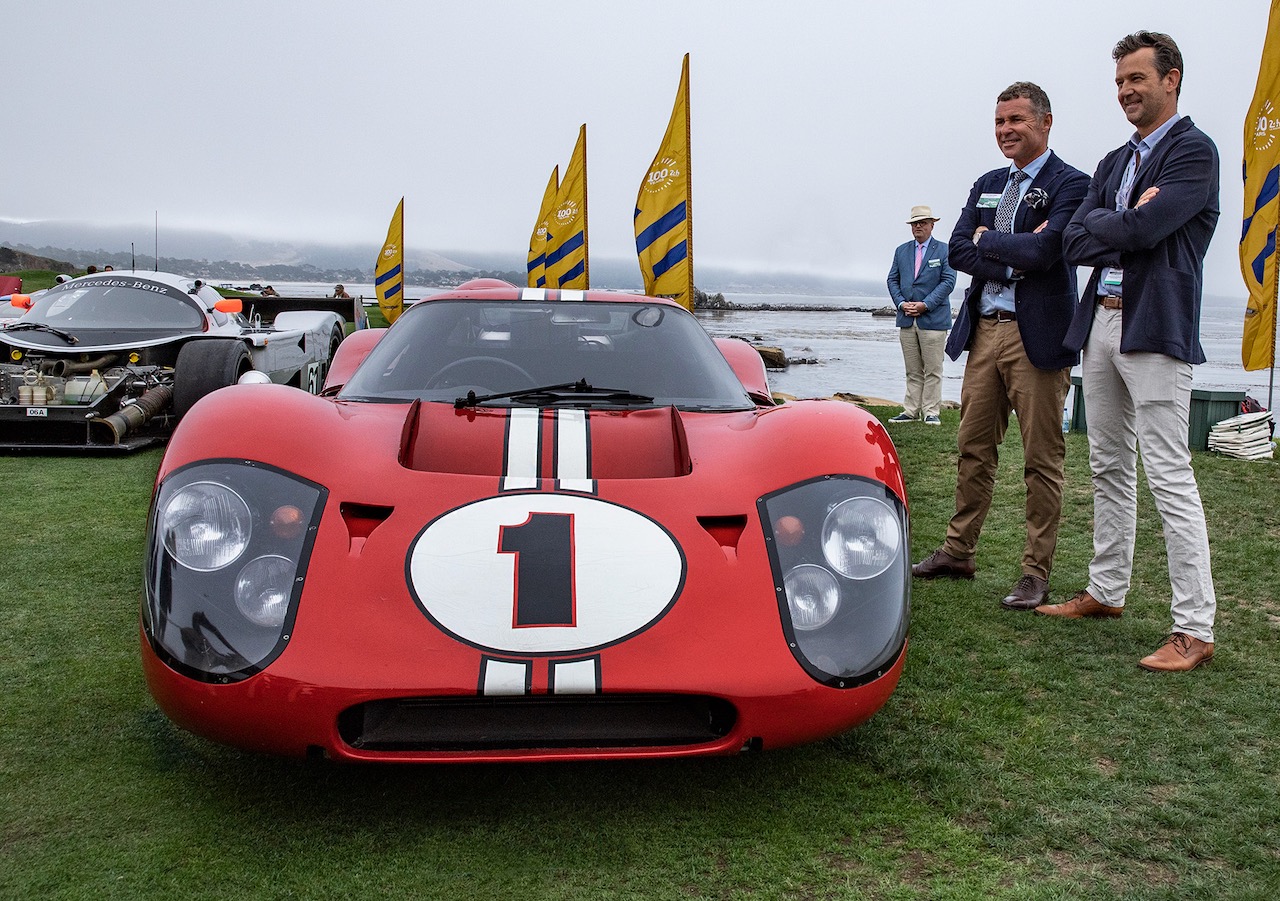 As promised, here is what many race enthusiasts consider one of the most important Mark IVs ever raced. It’s the 1967 Le Mans winning Mark IV (Chassis J-5) that was driven by A.J. Foyt and Dan Gurney to Ford’s second consecutive win at the 24-hour classic. Built by Kar-Kraft, the car is powered by a Tunnel Port 427 and sports a NASCAR-style steel roll cage – plus the infamous “Gurney Bump” in the driver’s door to accommodate Dan’s tall frame. The car was donated to The Henry Ford Museum in 1972. Oh, the dapper gent pictured in the middle is none other than Tom Kristensen, the daring Dane who holds the record for the most wins at the 24 Hours of Le Mans with nine! 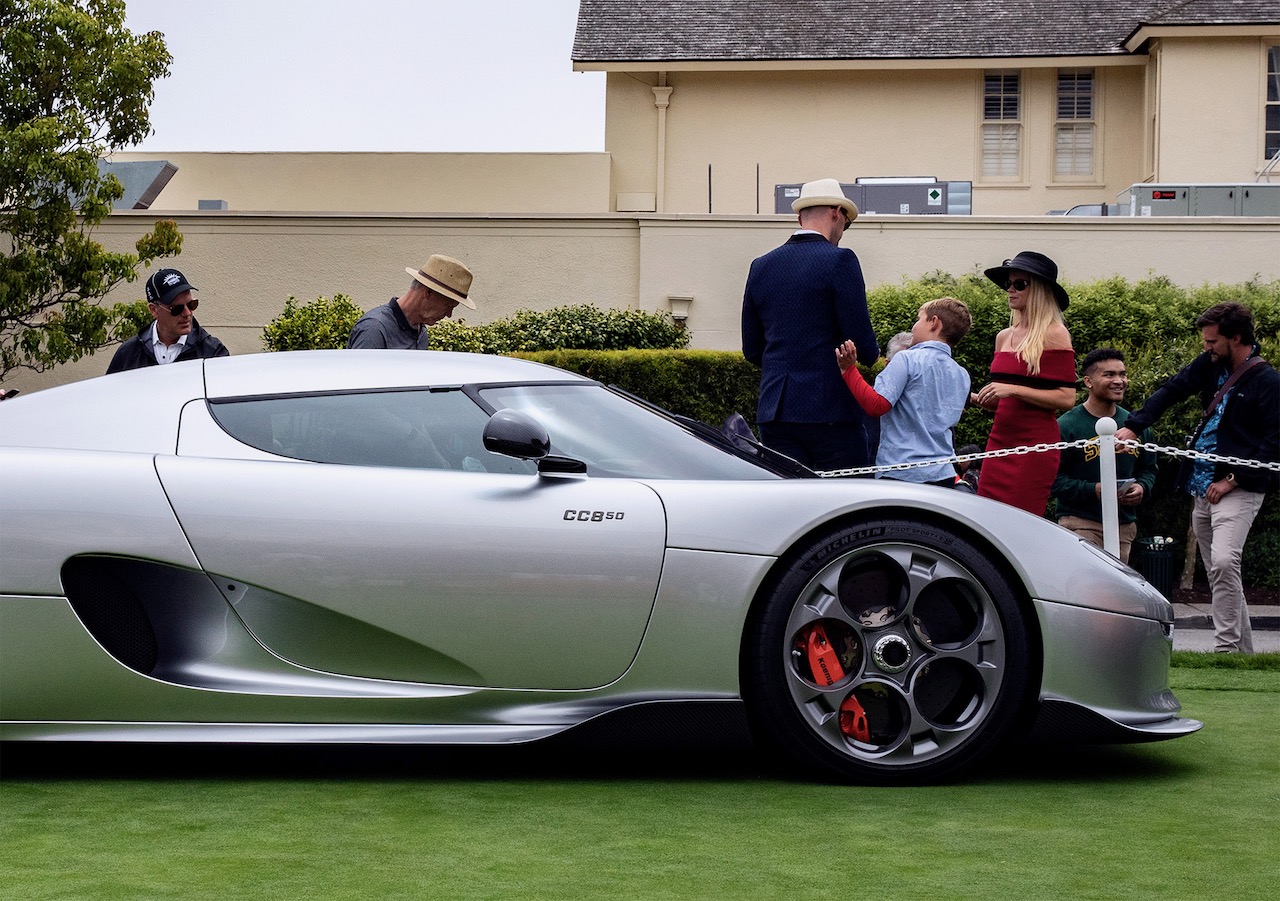 An homage to its CC8 Supercar launched in 2002, the Koenigsegg CC850 is a being promoted as ‘The fastest and most powerful manual production car in the world.’ While capable of generating 1,385 horsepower from its twin-turbocharged 5.0-litre Jesko V8 when running E85 fuel, the buzz at Pebble Beach seemed to be more about its nine-speed gated six-speed manual shifter. That’s right, nine speeds when switching between drive modes – which also includes a fully automatic option. Confused? Don’t worry, as there will only be 50 examples built to commemorate the 50th birthday of company founder, Christian von Koenigsegg. 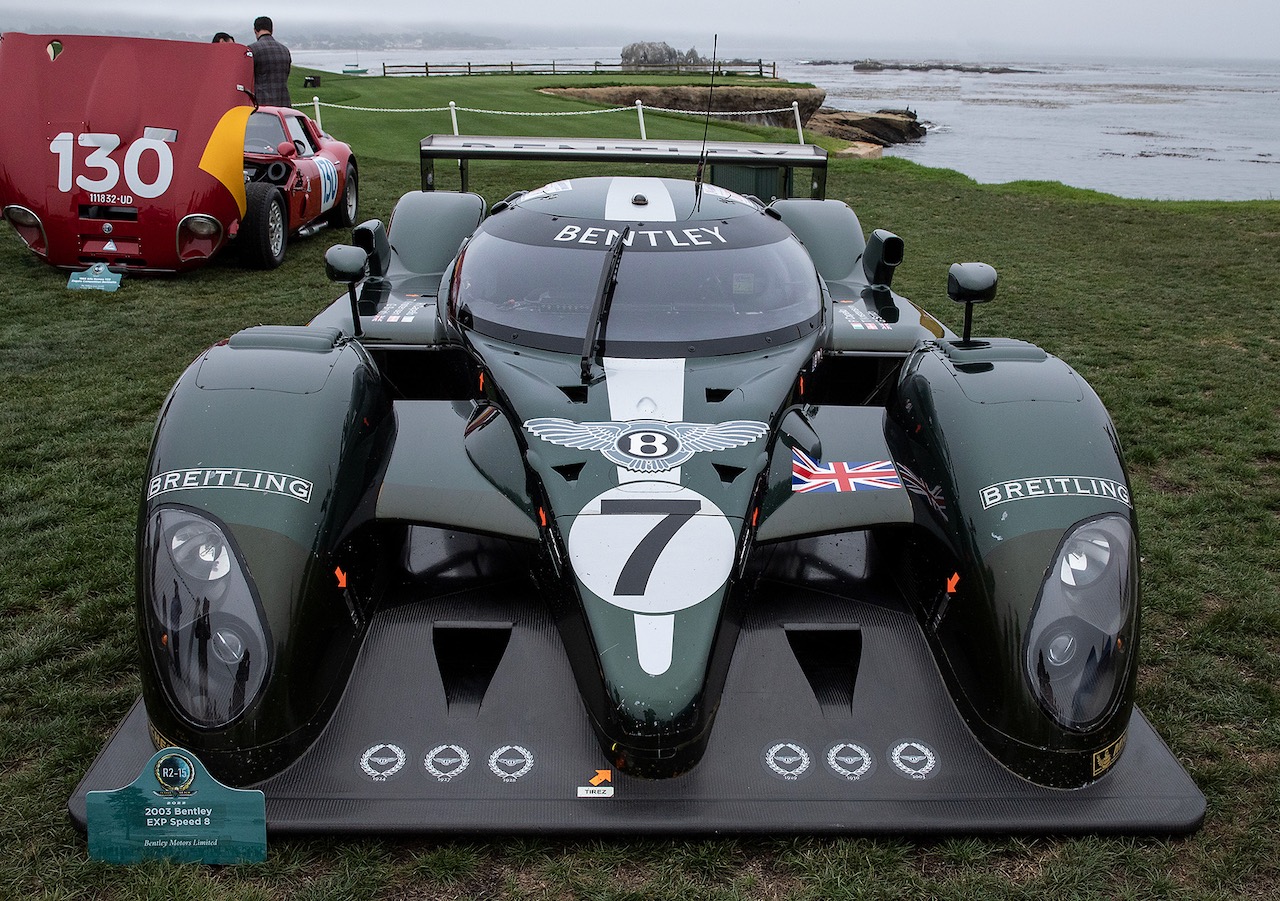 This beautiful beast is the #7 Bentley Speed 8 that was driven to victory at the 2003 24 Hours of Le Mans by drivers Rinaldo Capello, Tom Kristensen and Guy Smith. Finishing in 2nd place right behind it was #8 Bentley Speed 8 driven by Mark Blundell, David Brabham and Johnny Herbert. Considerable changes were made to the 2003 prototypes over the earlier Speed 8s to improve handling with a redesigned suspension and clever reshaping of the cockpit, rear wing, and air intakes for improved aerodynamics. 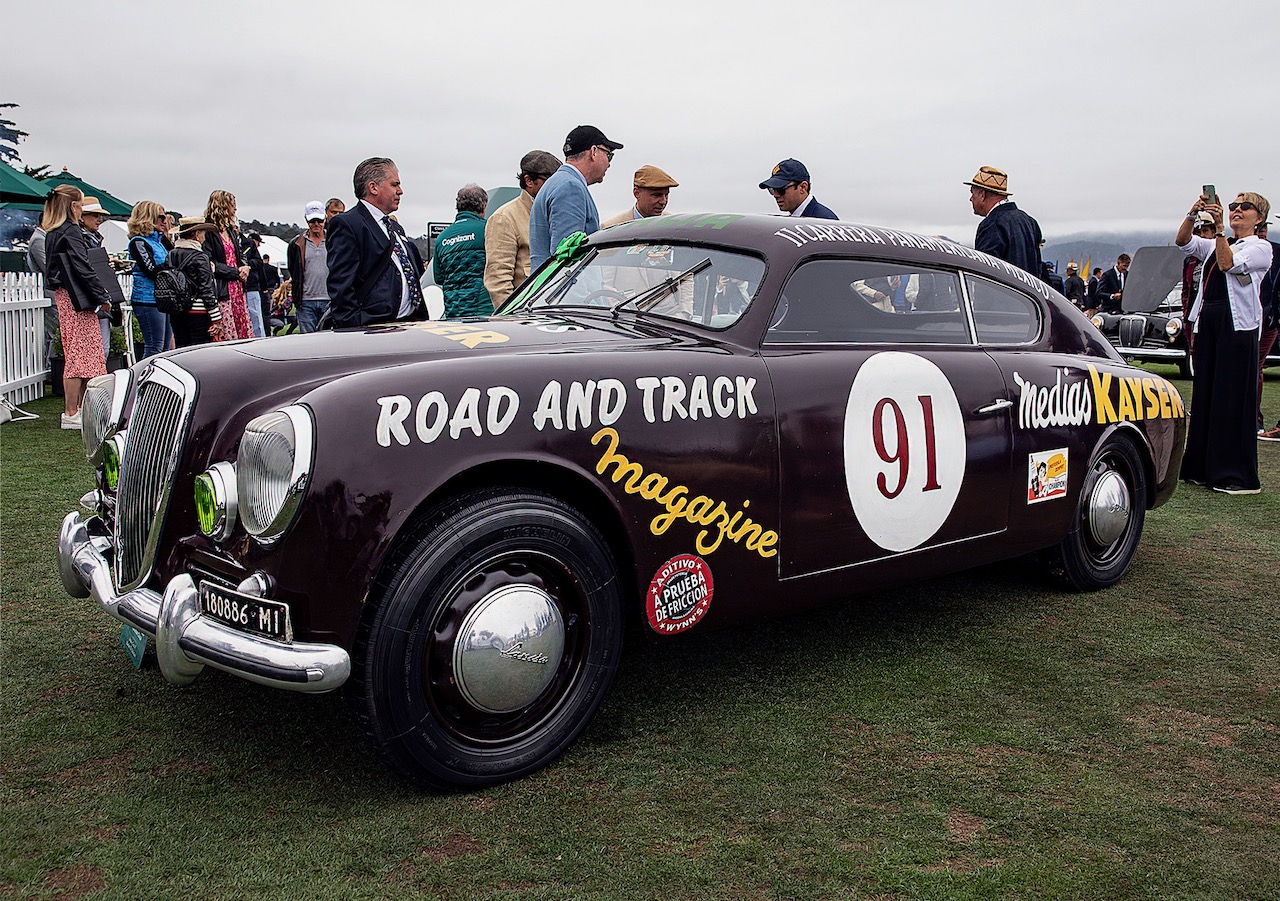 If you stripped-away the hand-painted racing graphics on this ‘51 Lancia Aurelia B20 GT you might overlook its racing heritage and provenance. But then you just might notice its lowered roofline or its credentials designating it further as a Pinin Farina Competition Coupe. This smile-inducing Lancia was in fact created specifically for and raced in the 1951 Carrera Panamericana and was a road test car featured in Road & Track magazine in 1952. 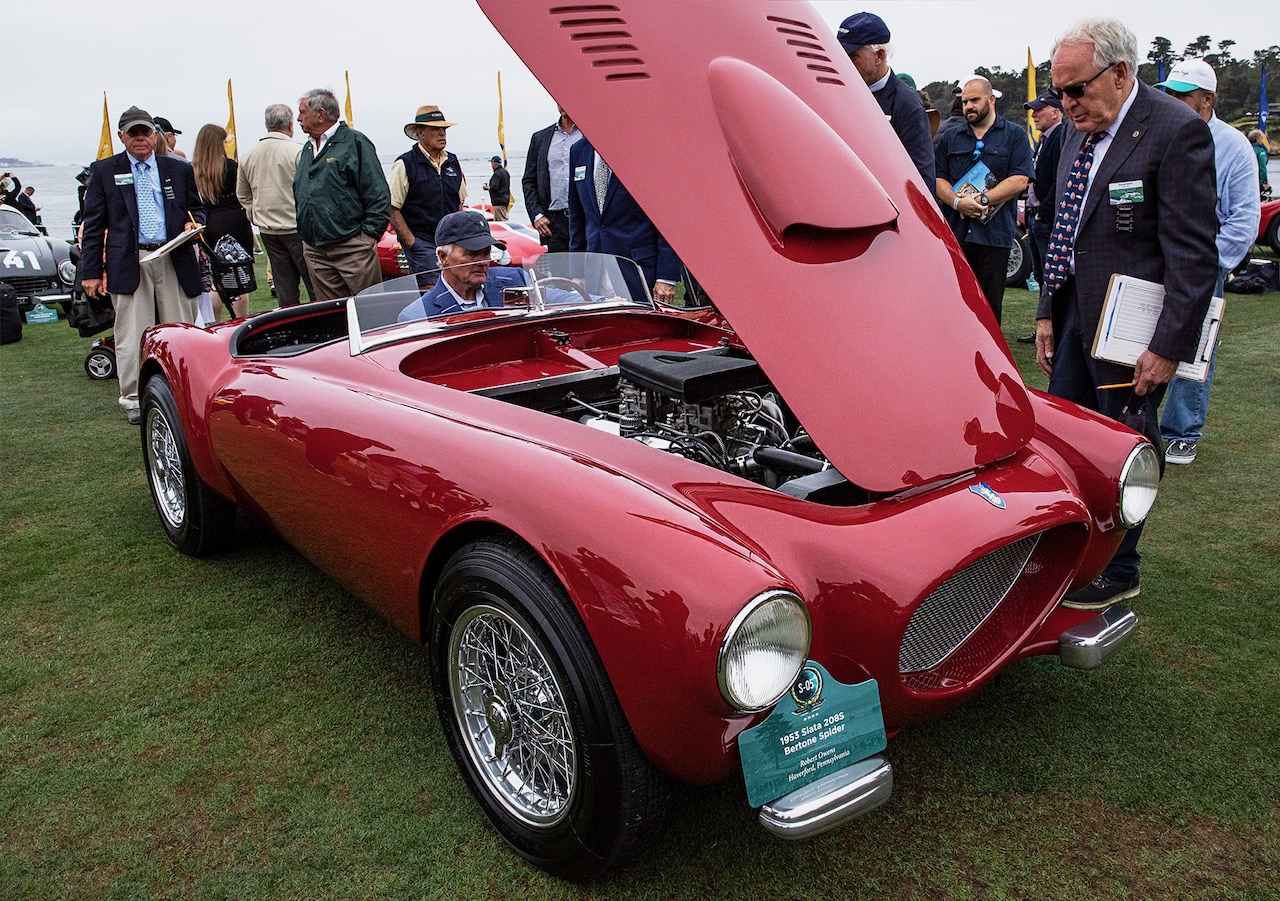 Judgement Day: It doesn’t matter that your very rare and drop-dead gorgeous ’53 Siata 208S Bertone Spider is the very first 208S prototype from Siata, or that it was one of the stars at the 1953 New York Car Show. The judges ain’t fooling around and they want to see those brake lights light up and hear that horn honk! Some of the judging criteria may seem trivial but Class Judges at Pebble Beach are acknowledged experts on specific marques, and they are focusing not just on styling and elegance, but on originality and authenticity as well. 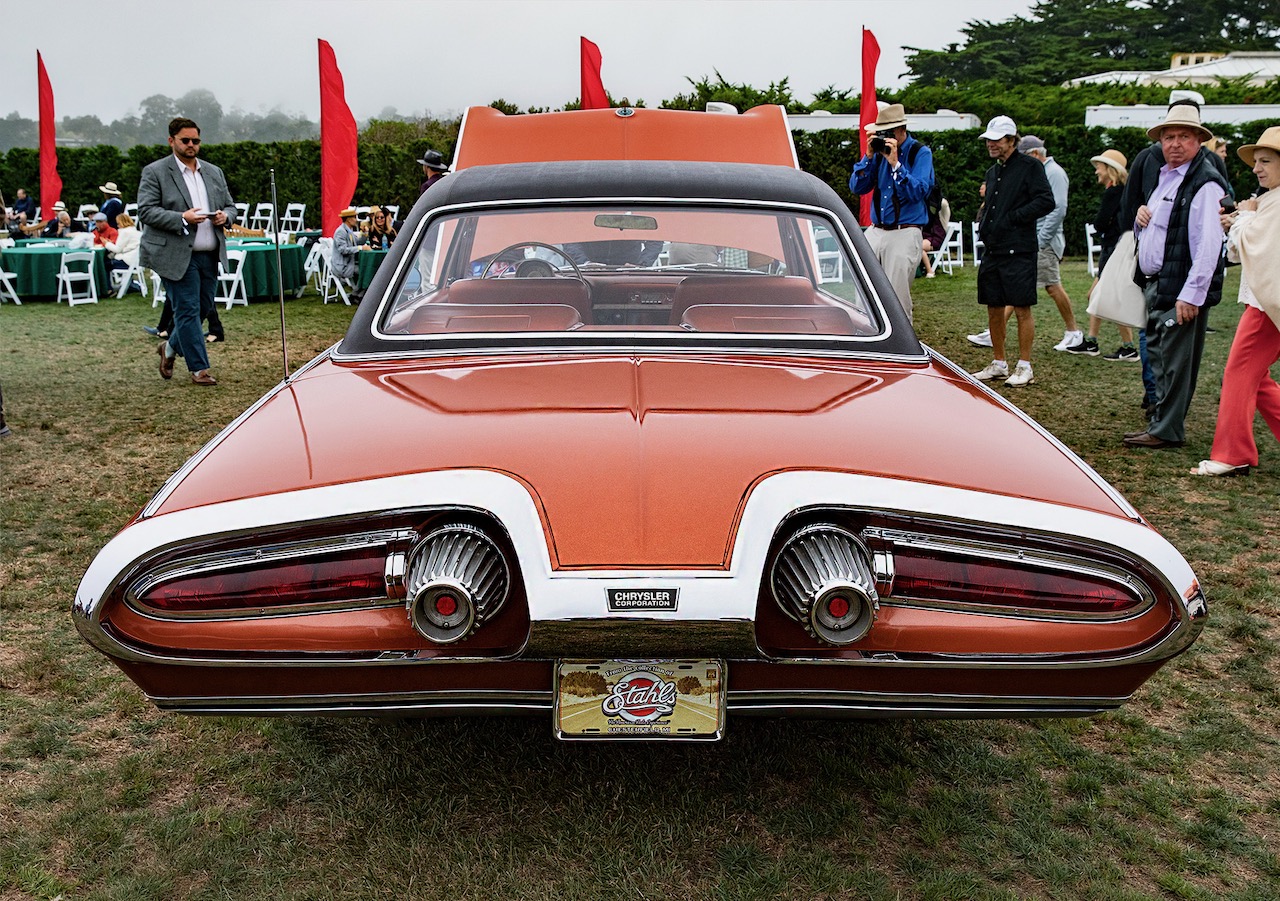 Entered in the Unorthodox Propulsion Category this rocket-tailed ‘63 Chrysler Turbine Ghia Coupe features an A-831 engine that could operate on alternative fuels like kerosene, jet fuel, peanut and soybean oil or tequila! A total of 55 cars were built, 46 were reclaimed and destroyed, 3 were kept and 6 were distributed to auto museums across America. This example is from the Stahls Automotive Foundation in Chesterfield, MI. 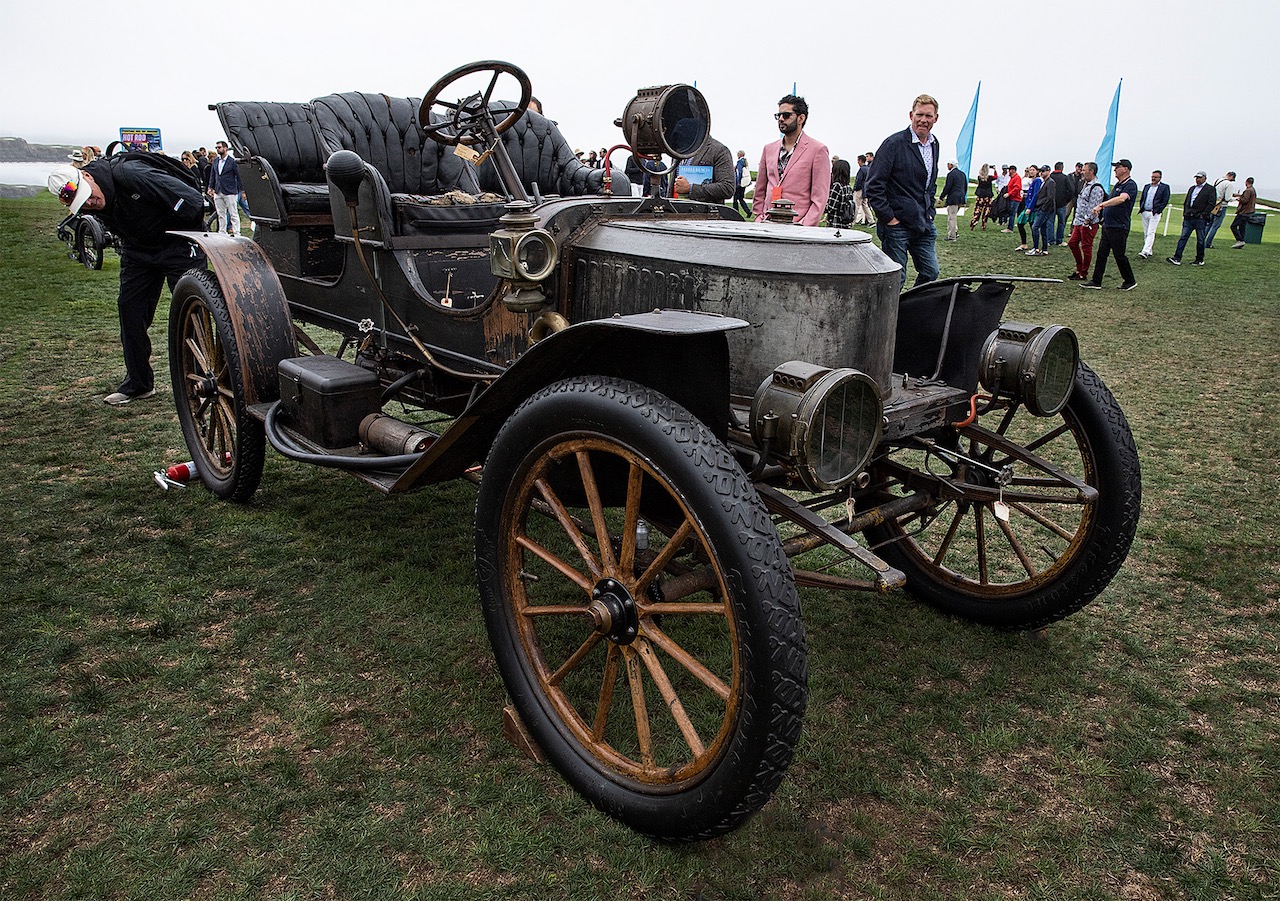 Maybe it was my growing up in a factory town in New York City, but I have always loved the look, smell and feel of vintage machinery. When I spotted this unrestored ‘09 Stanley E2 Runabout it was love at first sight. It is one of only 475 ever built and it cost $850 when new. This wonderfully worn and wrinkled, wooden-body Steamer is in full running order and retains its original black leather seats. Brothers Francis and Freelan Stanley founded the Stanley Steamer Carriage Company in 1901. 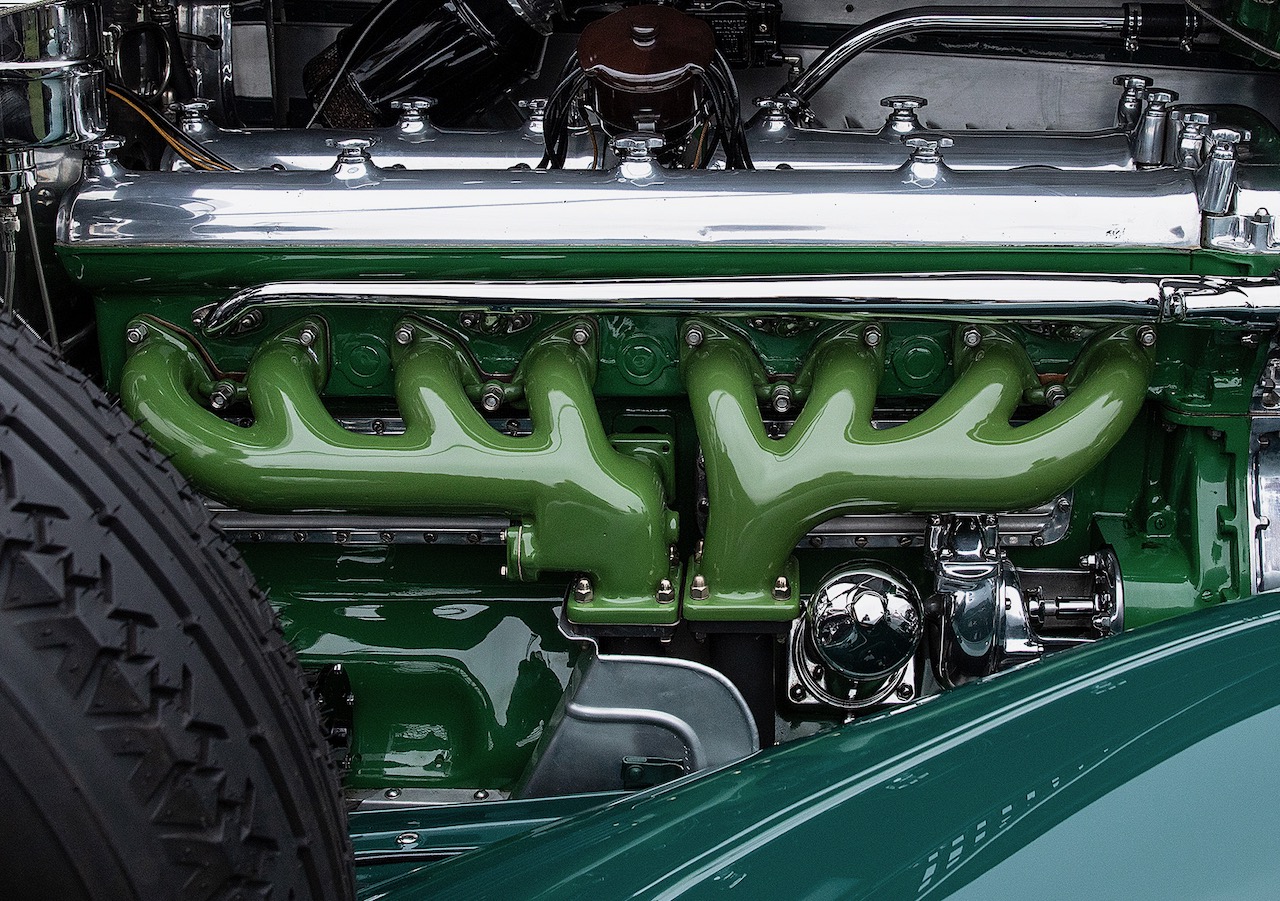 Speaking of vintage machinery, and with apologies to those who issued my Bachelor of Fine Arts degree, if I had to choose between an image of the Mona Lisa or of this ‘30 Duesenberg J Murphy Convertible Coupe engine to stare at for an hour, I’d hands down choose the gas burner! This impeccably restored, priceless piece of automotive history is owned by Meg McCarthy and Craig Kappel of Chatham, MA. 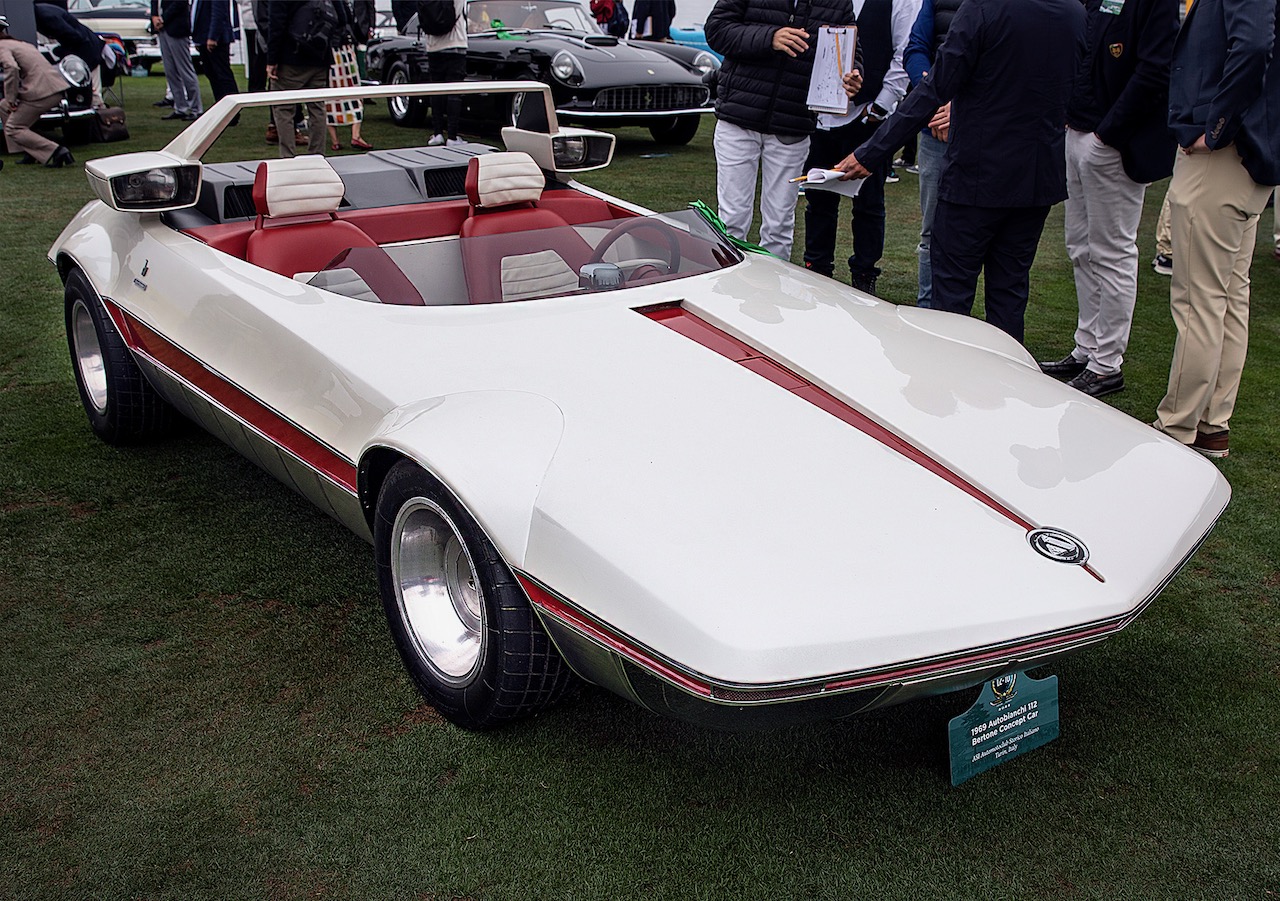 I bought one of the first wedge-shaped, mid-engined Fiat X1/9s delivered to New York City in 1974. At the time I had little knowledge of Carrozzeria Bertone or Gruppo Bertone, the Italian automobile styling and coachbuilding company behind its design. So, what a thrill it was to discover this ’69 Autobianchi 112 Bertone Concept Car on the field at Pebble Beach. This is the prototype car that was the inspiration for the X1/9. At time of its development its design was also influenced by race boats of the era, so there are no doors and the headlamps are mounted high on the side posts of the rollbar. The only instrument in the car is a speedometer styled as a nautical compass. 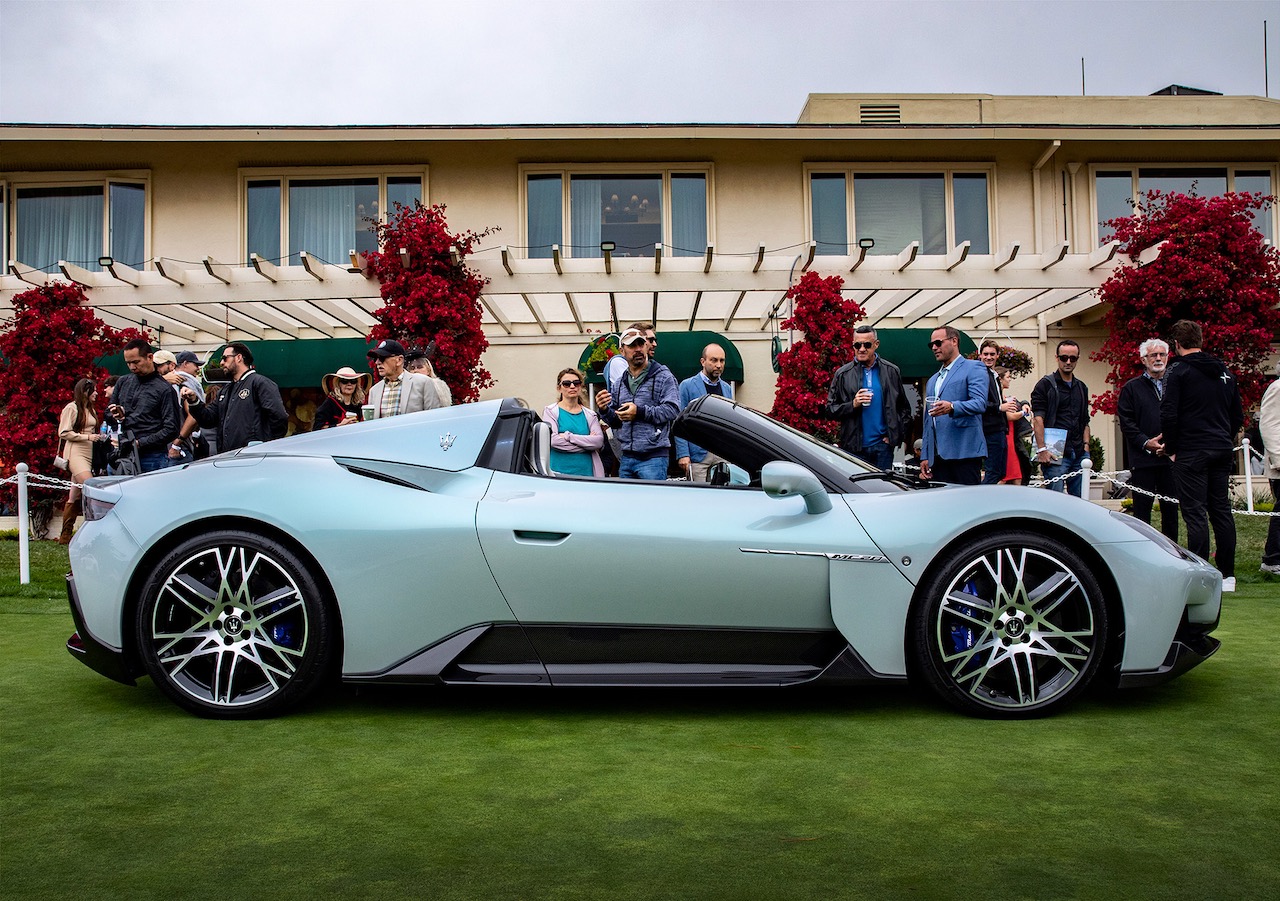 The slogan for the new Maserati MC20, is Race Audaciously into a Brave New Future. Now I’ve been an advertising word and image crafter for over four decades now and I understand that an impudent lack of respect is sometimes the way companies and brands roll. Time will tell how Maserati’s lightweight, butterfly-winged, mid-engined, 621 horsepower, 0-62 mph in 2.9 seconds Super Sports Car will perform in the marketplace and on superhighways. If you’re the audacious type and want to take bold risks, be ready to lay down about $250,000 for a fully-equipped MC20. 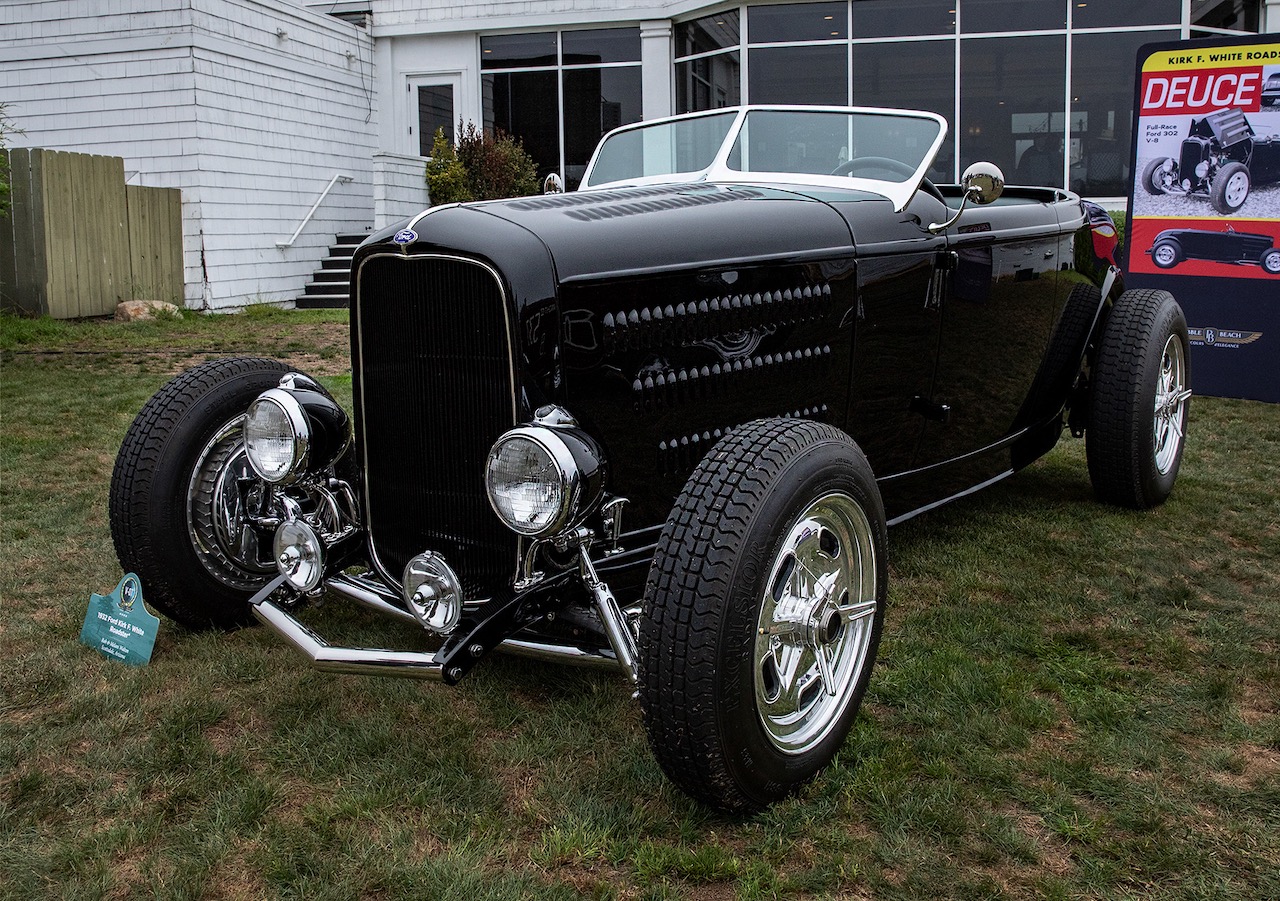 For us Car Guys who grew up in the 1950s and 1960s there’s still nothing quite like a classic ’32 Ford roadster. When Ferrari collector Kirk F. White decided to authorize the build of a perfect ’32, he assembled a team of the best fabricators and artisans around. Under the guidance and vision of Pete Chapouris III of So-Cal Speed Shop, his A-Team built this stunning Brookville steel-bodied gem. The current happy owners of this ’32 Ford are Rob & Melani Walton of Scottsdale, AZ. 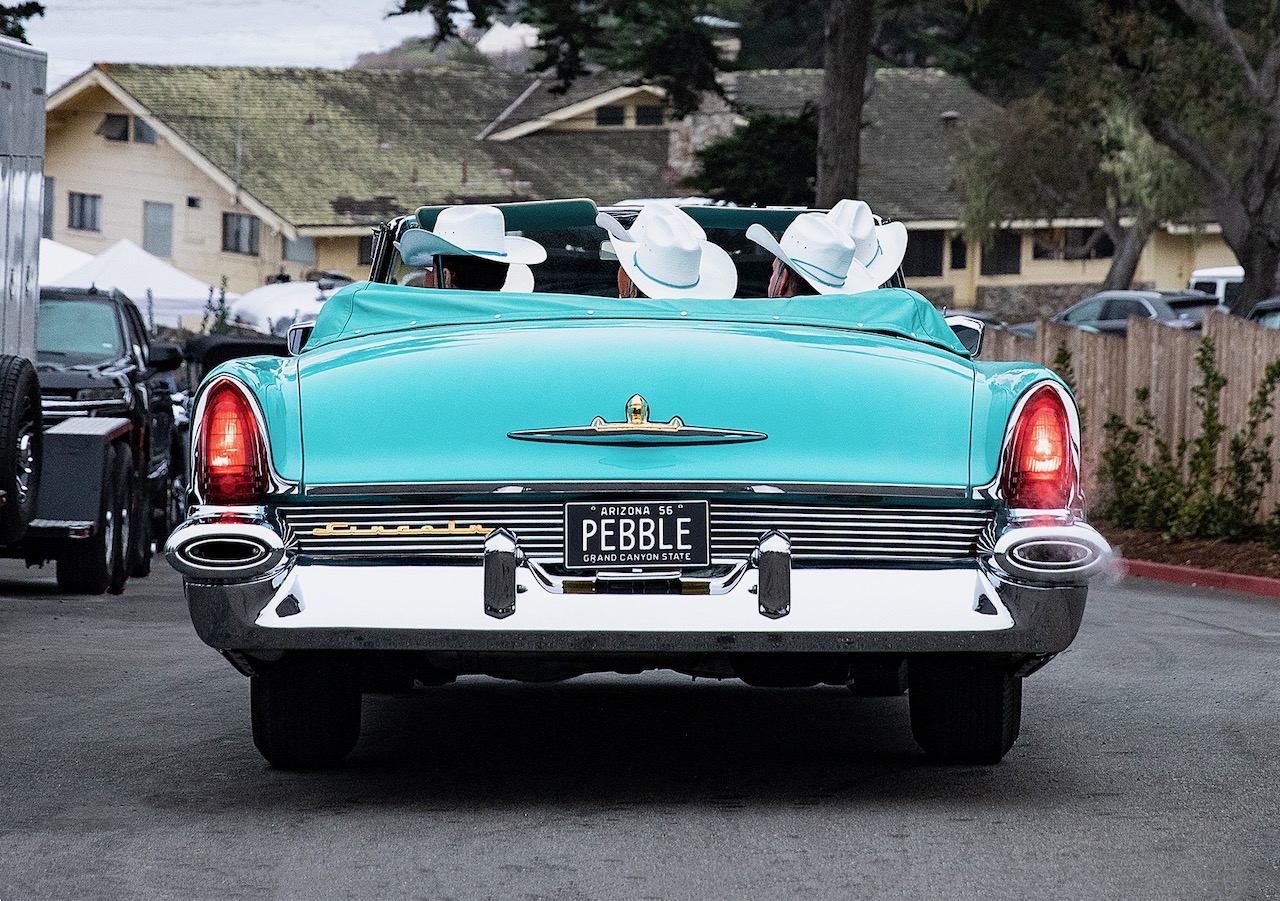 Six cowboys in white hats drive in to the Pebble Beach Concours d’Elegance 2022 in a turquoise convertible and order a good time! Congratulations and kudos to owners Ray Kinney and Jeff Wildin of Dallas, TX who made a big splash of color and fun on the show car entry road in their ‘56 Lincoln Premier convertible. Powered by a 368-cubic-inch Lincoln V8, this showboat is painted in rare and rich Taos Turquoise paint – the same color that was used in advertising materials for the new Premier model. And just how much are Ray and Jeff fans of the Pebble Beach event? Just check out the license plate!

Over the years the Pebble Beach Concours has raised over $32 million for charities. $2 million more is expected to be added once the 71st year’s contributions are tallied. So once again, Car Guys come through!