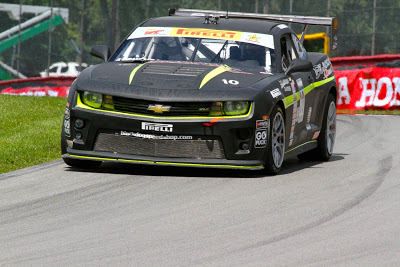 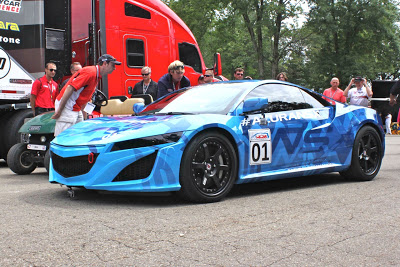 Sunday’s GTS winner was Lawson Aschenbach, Jupiter, FL in the Black Dog Speed Shop Camaro. Here he is dropping downhill in Turn 12, the “Carousel”. This reminds me of the old Trans-Am series where cars you saw on the street everyday ran bumper-to-bumper.  If you aren’t familiar with the Pirelli World Challenge, you may want to check it out.

Acura showed its NSX Concept, top, with full livery, at the races. Targeted for release in 2015, it will feature a hybrid drivetrain. I saw elements of the McLaren in it while others thought it favored the Audi R8. It will be fast! 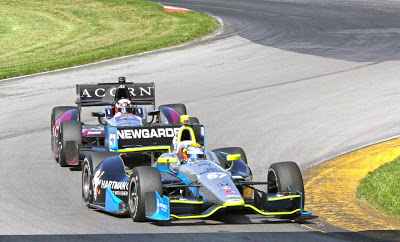 At the top of the weekend heap was IndyCar, holding their annual Honda 200. Here James Jakes chases Josef Newgarden through the Turns 6 & 7,just past the “Esses.” 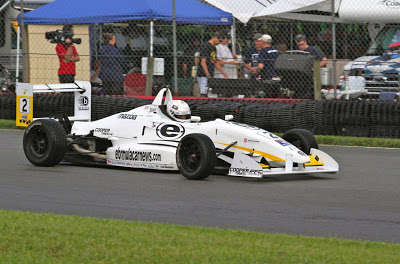 The weekend featured a number of double winners including Neil Alberico who took both Cooper Tire USF2000 races with his Cape Motorsports entry. Formula 2000 is the first rung on the IndyCar ladder. For young drivers, it’s the “road to Indy.” Shot is from early Saturday when the weekend’s only rain caused cars to spin everywhere! 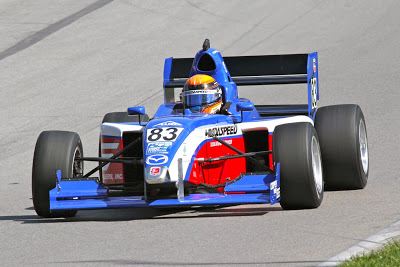 Mid-Ohio has a lot of elevation changes as the course winds its way through the Ohio countryside, resulting in “Thunder Valley” as the course dips between Turns 9 and 10 supplying an auditory sensation. Flashing through the “Valley” in his Pro Mazda is Matthew Brabham, another of the weekend’s dual winners. With his victories at Mid-Ohio, Matthew set a  record for wins in a season; I am sure made his Grandfather “Black Jack” Brabham very proud. 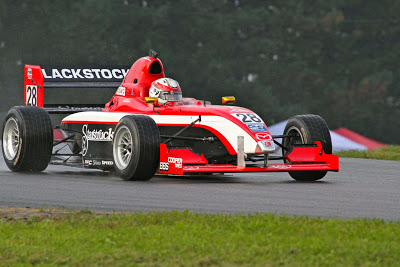 Pro Mazda is the second rung in the IndyCar ladder. As with USF2000, the cars are Mazda-powered. Here cresting Turn 5 in Saturday’s early rain is Shelby Blackstock who captured a Second and Fourth on the weekend. Blackstock is the son of country music star, Reba McEntire. 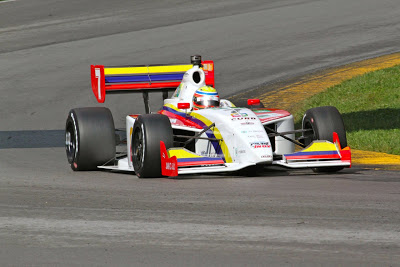 The final rung on the development ladder is the Firestone Indy Lights Series with Dallara chassis, Firestone tires and Infiniti powerplants. Sunday’s winner was Gabby Chaves, a Columbian-American driver whose racing resume  includes a stint in Italian Formula Three. Here Chaves grabs the apex in Turn 7 under the pedestrian bridge. 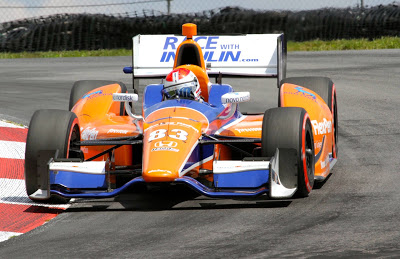 Now to the reason we all came, the Honda 200. Here is the winner Charlie Kimball moving through Turn 2, Mid-Ohio’s famous “Keyhole” that combines a 180-degree turn connecting the front and back straights with yet another elevation change. Kimball was a popular first time winner for Chip Ganassi’s stable and a great story. He has continued his racing career after being diagnosed with diabetes. His victory combined some great driving with a race strategy change made on the fly to position him for the win. 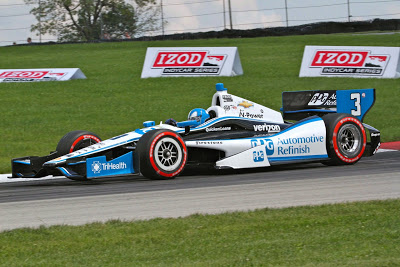 Series leader Helio Castroneves gained eight spots in the race and finished ahead of his
closest rival in the series point chase, Scott Dixon, to firm up his position at the head
of the IndyCar series leader board. 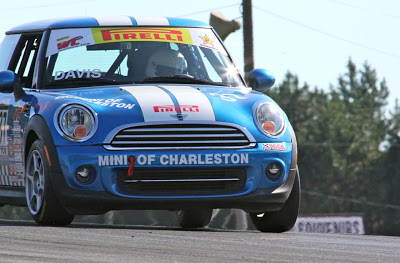 But wait, there’s more. Thrown into the weekend’s racing mix was the Pirelli World Challenge for “tin tops.” This was some good racing with full fields of cars divided into Touring Car and GT races with two classes within each. We’ll start at the bottom and work our way up. Here is the winner of the TCB class of the first Touring Car race, Robbie Davis in his Mini. They ran two TC races on Saturday afternoon with a stop in between for tire changes. 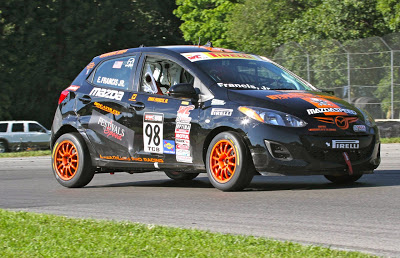 Ernie Frances Jr. beat his Dad home for First in the second TCB race in his Mazda 2. This
is usually what I get when I request a full-size at a car rental counter, but the
Francis Team converts them into winning racecars! 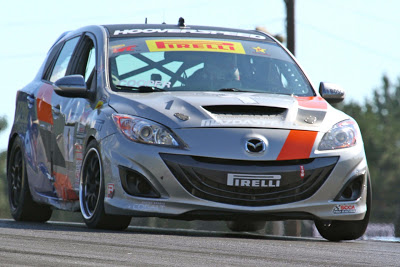 Taking First Overall and First in the TC class in both races was Michael Cooper in a Mazda 3. Cooper was the class of the field; never appeared to be threatened for the win in either race. 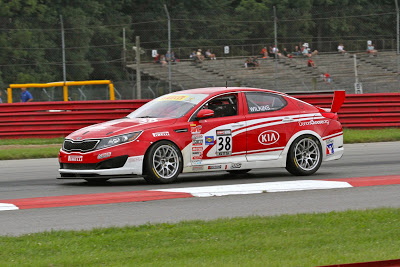 Mark Wilkins came down from Canada to win the GTS position of Saturday’s combined GT/GTS contest in a Kia Optima. Here he is in Turn 1 here right after the drive-over bridge. Wilkins was not as fortunate in Sunday’s race and had to settle for a Fourth place finish. 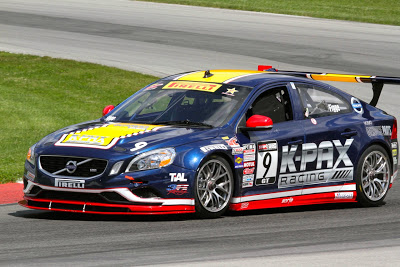 And here we have yet another double winner from the weekend. K-Pax Racing’s Volvo S60 carried Alex Figge to victory on Saturday and Sunday. It was great fun to watch a four-door sedan overwhelm Cadillacs, Audi R8s, a Viper, Corvette, etc.