Skip to content
Mike Matune checks out historic Clifton, VA, when it’s transformed for one day into an incredible car show. 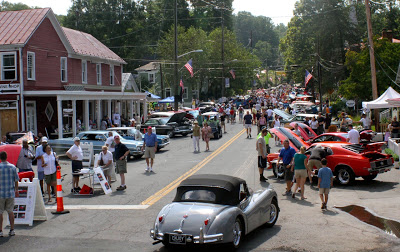 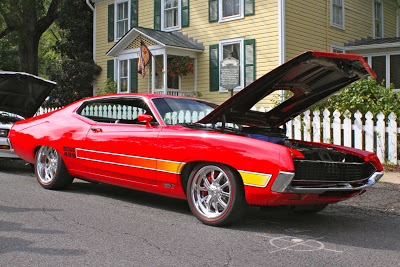 Labor Day traditionally marks the end of summer. The kids here go back to school the Tuesday after and hot, lazy days become a distant memory, for at least another year. It also marks the day the Clifton Lions Club and the Custom Cruisers of Northern Virginia present their “On The Streets” car show in historic downtown Clifton. If the red building to the left, top, looks familiar, it appears in the 1987 movie, Broadcast News.

Tim Gilbert’s ‘70 Boss 429 Torino, above, is “one of none,” as Ford never built one. It does have some basis in reality though, as the early-‘70 Torino brochure listed the engine as an option. Gilbert’s car was styled by Steve Stanford and hosts a number of touches, some barely discernible. Did you notice that the bumpers were smoothed and reshaped to better fit the body or that the side marker lights had been removed? Note that while the door handles are still in place, the locks have been removed and that the stock looking stripe package has been modified. If it looks familiar, it was a Popular Hot Rodding cover car a few years ago.  The Buckley House in the rear is where Jeff Arch wrote, Sleepless in Seattle. 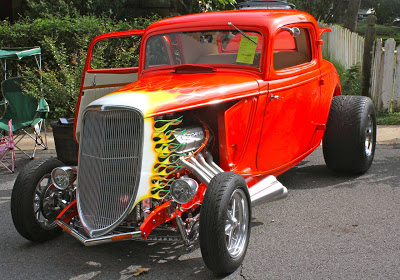 Lexie Rollins’ ‘34 Ford Highboy is a very well done piece, but two things caught my eye. First, look at how he integrated the flames into the side. They are as if cut out of the hood sides, carefully crafted to appear multi-dimensional. The other touch is the four-into-four “zoomies.”

First off, let’s just say that there is little on this T-Bucket that’s not required for its intended purpose. And lest you think this is some trailer queen, I saw the car out on the road before the show. With all that power, short wheelbase and rudimentary suspension, it must be a handful at full throttle! Not visible here were a set of wheelie-bars which probably are well used! In the background is the Clifton Baptist Church, originally founded after the Civil War by
people who had served with Mosby’s Raiders. 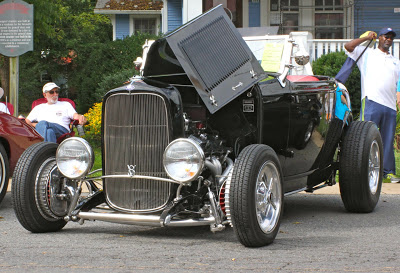 Paul Malanorino’s Deuce highboy started as an original steel car, but he admits very little of that car survives today. Henry’s landmark ’32 has been done to death, but this one is really special. 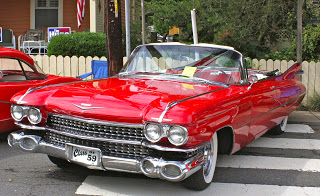 Certain cars, like this red ‘59 Cadillac convertible for example, is an icon of popular culture. Nothing marks that transition point between the optimism of the 1950s and the turmoil of the 1960s quite like this finned beauty. This car is approximately 225 inches long and 80 inches wide, while a new Cadillac Escalade ESV is 222 inches long and 79 inches wide. It defines BIG! 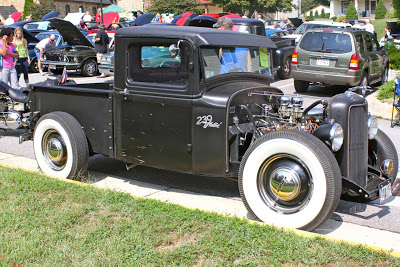 Shirley & Juan Sakata assembled this period-correct ‘32 Ford pickup. Unlike some attempts at recreating the look and feel of early hot rods, they carefully chose pieces from that era. In
other words, it’s era correct without the use of billet components. It is a very carefully
crafted piece and they are to be congratulated. 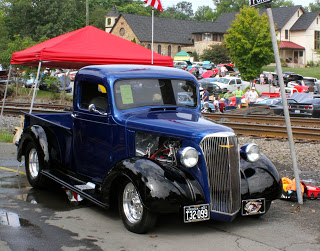 Don’t know if this was happenstance, or a tongue-in-cheek plan by the organizers, but Chuck Johnson’s ‘37 Chevy pickup was displayed on Ford Lane! Neat truck has Pro-Street look, featuring a tubbed bed with BIG rear tires, skinny fronts; all under an immaculately finished near stock body.  In the background is Clifton Presbyterian Church, also dating from the right after the Civil War when it was an important railroad stop and  largest town in Fairfax County. 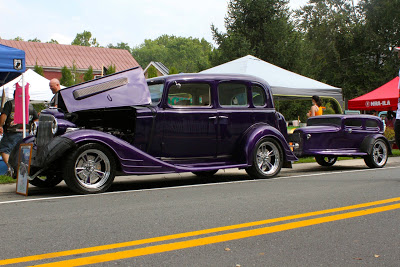 Fitted with modern cruising amenities like disc brakes, automatic transmission and air conditioning and towing a matching travel trailer, Johnny Brooks uses his ‘34 Pontiac as intended; he drives it. It was incredibly well presented for a rod that is actually a road warrior!

For more information about the Clifton shows, please visit http://labordaycarshow.webs.com/