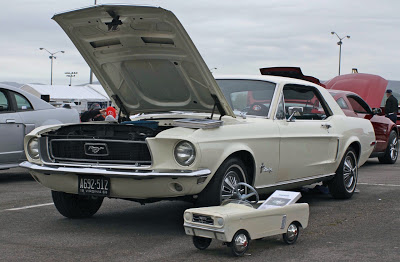 There were Mustangs of just about every period in the nameplate’s long and storied history at the show. One that really caught our eye was a white ‘68, Six- cylinder, three-speed stick coupe.  It’s a one-owner Mustang that has racked up almost 375,000 miles in nearly 45 years since selling for $2,788.53 when new. For comparison, that would be about $18,700 today versus a new Mustang’s sticker price of $22,200. The engine remains untouched and the
car has been repainted only once during the two-year period the car was off the road
for restoration. Unlike a number of collector cars, it has never been stored inside.
The accompanying pedal car was a Grandfather/Grandson project, perpetuating
the hobby for yet another generation. 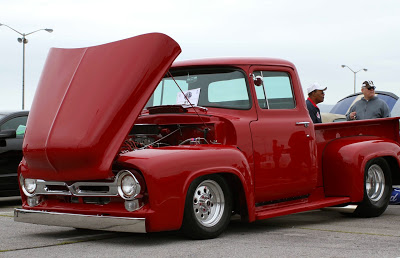 I don’t know how many of these mid-1950s Ford pickup trucks were produced, but it seems like a big percentage are still on the road and in loving hands. This one features top quality body and paintwork and is powered by a chromed and polished 450-plus-horspower big-inch Ford. It has the right stance and just enough subtle detail work to give it “the look.”

What look like wire sculptures along the side of the engine bay, left, are actually hood latches. The rollers inside the hood ride along these and guide the hood back and forth as it is opened and closed. The articulated hinge at the front, allows the hood to move forward past the body and down. 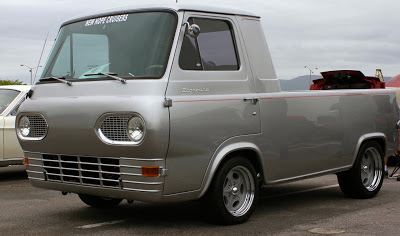 There was no shortage of pickups at this show and a 1960s Ford Econoline really attracted a crowd. Since its early workhorse days when the owner’s Dad & Uncle shared it for home improvement projects, it has gradually been transformed into one very slick Resto-Mod style ride.The truck retains its straight Six and stick transmission, but little else has been unchanged, with the owner and friends doing all the work. 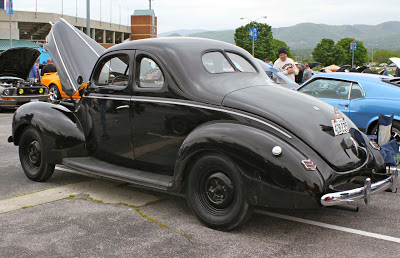 Nothing says “old school” ride like a black mostly original, unrestored ‘40 Ford Coupe with just enough subtle details to tell a story. There was a time in these parts when “revenuers” and the locals skirmished over the production of moonshine. From this “industry” came some early NASCAR racing greats who have since become icons. Tying into that theme are small
Holman & Moody stickers on the quarter- windows and a Pure emblem on the trunk lid.
Dual exhausts exit under the rear bumper. 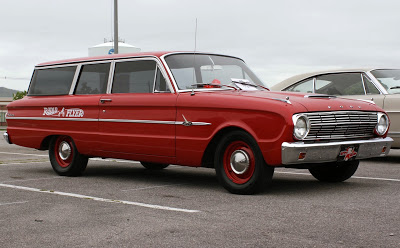 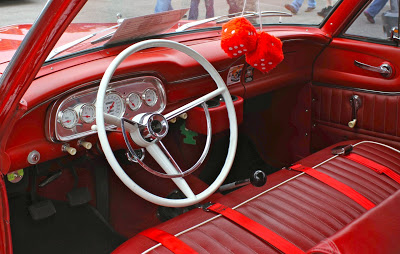 We found this ‘63 Falcon two-door wagon parked all the way at the back of the show. I was drawn to its clean lines, stance and graphics. The “Radio Flyer” logo appeared to be hand lettered on the rear quarter, brush strokes and all. The interior was very well detailed indicating more modifications under the hood and between the rails. Overall fit and finish is outstanding. 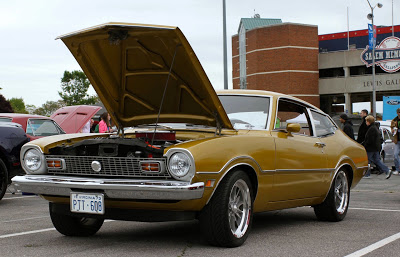 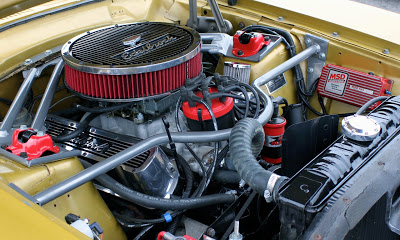 The event was held at the minor league Salem Red Sox ballpark and there was one car, a Maverick, which rarely pops up at shows. Modifications include grille and mirrors from the sportier “Grabber” version, a billet grille badge, updated wheels, a chin spoiler and HEI headlights. Under the hood sits a warmed-over Ford small-block. There are braces running from the cowl to the shock towers plus a chassis-stiffening “Monte Carlo” bar similar to those used on Monte Carlo Rallye Falcons and Shelby GT350’s of the 1960’s. 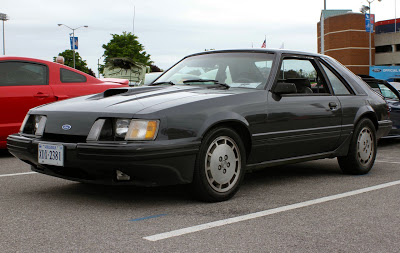 In the mid-1980s, Ford brought out the Euro-style Mustang SVO powered by a turbocharged 2.3-liter (Pinto) Four. Neat ‘85 Mustang SVO, with 175-hp engine stood out at the show. Goodies include hood scoop and a bi-plane rear spoiler and a leather interior with Recaro buckets. High cost and lack of performance kept interest and sales sales low.