If you are truly interested in the birth and evolution of hot rodding, the speed equipment industry and drag racing in America, Bob McClurg’s FIVE-STAR: THE AMERICAN SPEED SHOP is THE book to read! 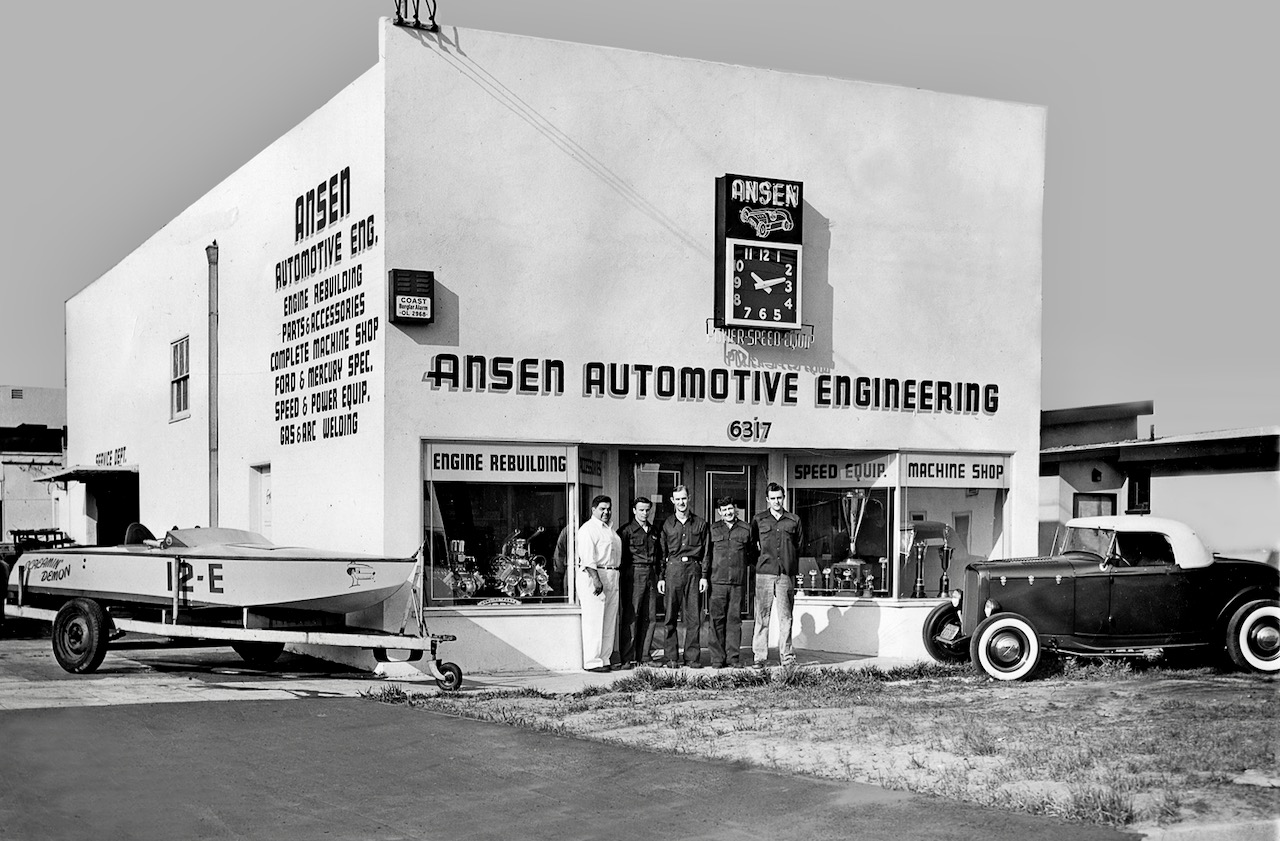 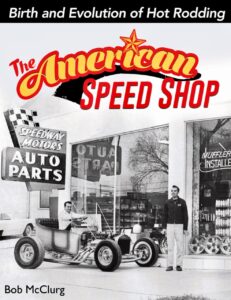 If there’s anyone who should be teaching Hot Rodding 101 at your local community college, it’s Bob McClurg! He’s an accomplished photographer, scribe, author and a true student of the evolution of hot rodding and drag racing – from four-cylinder and Flathead and OHV V8 revolutions, through modern times. At the heart of these iconic times is the speed shop, where dreams were and, in some cases, still are turned into reality.

Decades before the Donut Derelicts launched the Cars & Coffee (and donuts) culture phenomenon in Huntington Beach, CA in 1985, speed shops were where carguys went on Saturday mornings to bench race, hang out and even buy stuff for their rides before heading to tracks. Parking lots at speed shows, however small, were transformed into revolving mini car shows. There was always something to see and talk about. McClurg captures those moments in his terrific tome: FIVE-STAR: THE AMERICAN SPEED SHOP. 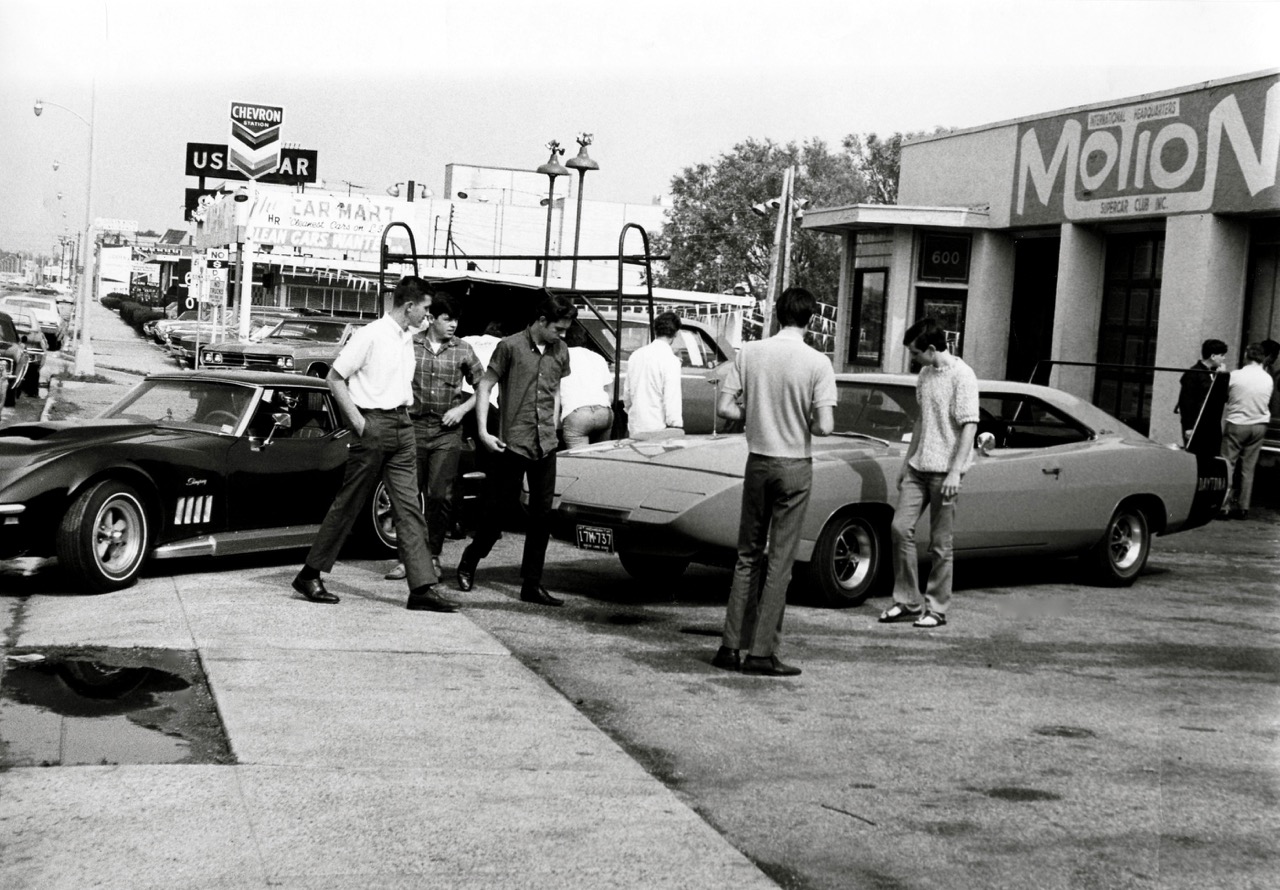 To set the tone of when racing started in America, closely followed by the history of speed shop growth and speed equipment manufacturing, McClurg quotes Henry Ford, who certainly was not the only one to say, “Auto racing began five minutes after the second car was built,” in Chapter 1, BIRTH OF A SEEDLING INDUSTRY. Ford’s Model T, followed by the modernized A, started a racing revolution that actually continues more than a century later – stronger than ever – in Pre-War Historic racing both here and abroad. Henry Ford successfully raced a car of his own design before there was a Ford Motor Company. 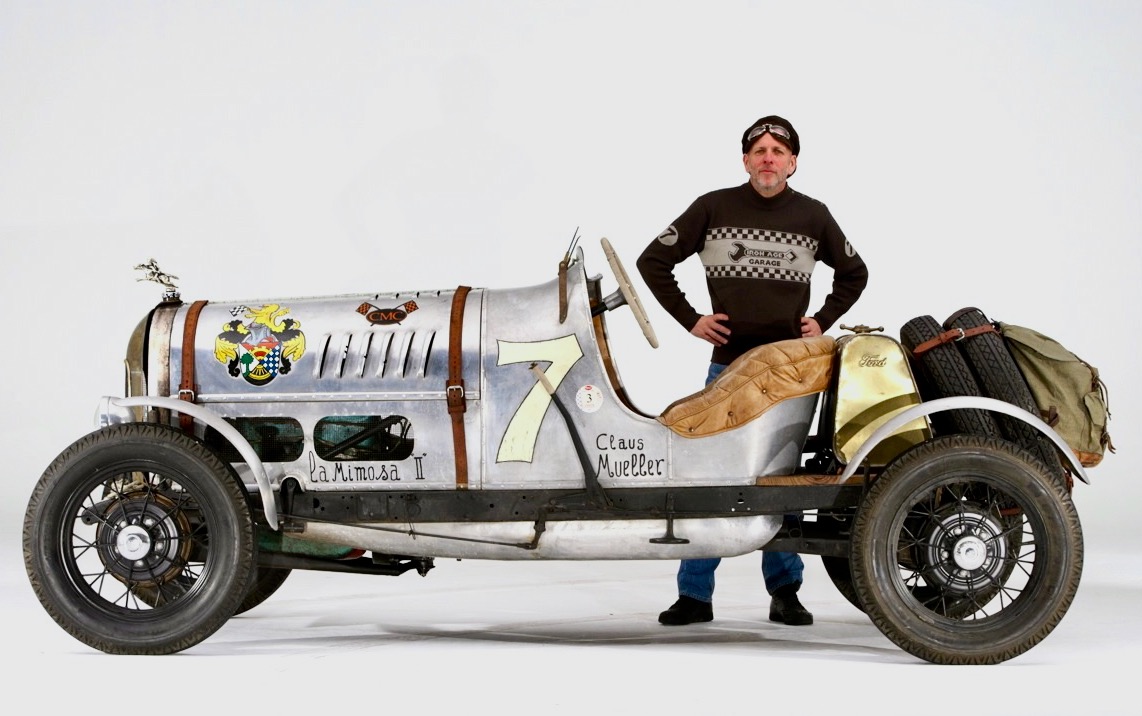 Most enthusiasts of a certain age, credit the start of hot rodding to the Ford Flathead V8, an engine that broke cover in 1932 when four and six-cylinder engines were popular power choices for enthusiasts. By the time first Flathead surfaced in the ’32 Ford, thousands of speed and performance garages dotted the map from coast to coast. They specialized in coaxing more power from popular four-cylinder Fords. New-car dealers got into the action as well. They converted used Model Ts and later Model As into sporty cars, hot rods and racecars using Mercury and Langdon Speedster bodies, Ruckstell two-speed rear ends, Franklin steering, Buffalo 20-inch wire wheels and modified engines. 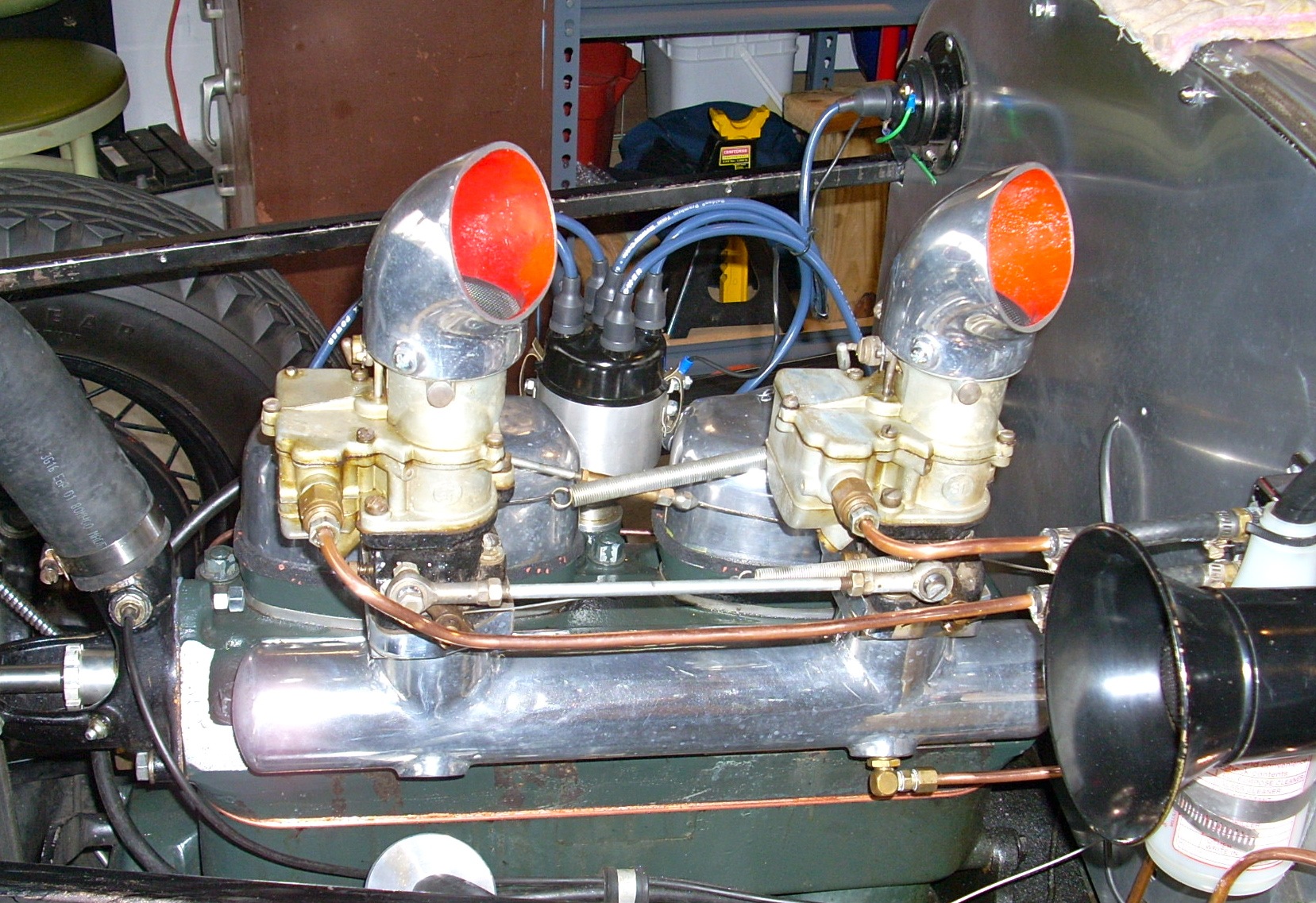 McClurg devotes a good amount of space to how enthusiasts coaxed more horsepower out of the popular four-cylinder Fords of the pre-Flathead era,1920s and 1930s. Ford enthusiasts could choose from overhead valve (OHV), or single overhead cam (SOHC) or dual overhead cam (DOHC) conversion heads made by Clemons, Cragar, Frontenac, Gemsa, Hal, Hunt, Rajo, Riley, Roof, Winfield and others. The Frontenac or “Fronty” DOHC 16-valve conversion, manufactured by Arthur and Louis Chevrolet (yes, that Chevrolet) was extremely popular with racers and hot rodders searching for maximum performance. It was not unusual for highly modified Fronty Fords to produce more than 125 horsepower and redline at over 5,000 rpm. There was also a rare “Peugeot-Type” OHV 16-valve head conversion kit for Model T Fours, manufactured by The Laurel Motors Corporation in Anderson, IL.

In the 1920s in California, the Model T Ford gave birth to the exclusively American hot rod movement. When Ford introduced its new and improved 40-horsepower Model A in 1928, it took over. Highly modified Ford Fours delivered V8 performance, powering roadsters, coupes and belly tankers (Lakesters/Streamliners). They could be found on weekends at both the dry lakes in the Mojave high desert (El Mirage, Muroc and Rosamond) and the wood-board and dirt race tracks in California. Racing on the dry lakes was sanctioned by the Russetta Timing Association (RTA) and Southern California Timing Association (SCTA). When the 65-horsepower Flathead V8 Ford debuted in 1932, it assured Ford’s domination of the hot rod field until the advent of OHV V8s in 1949. 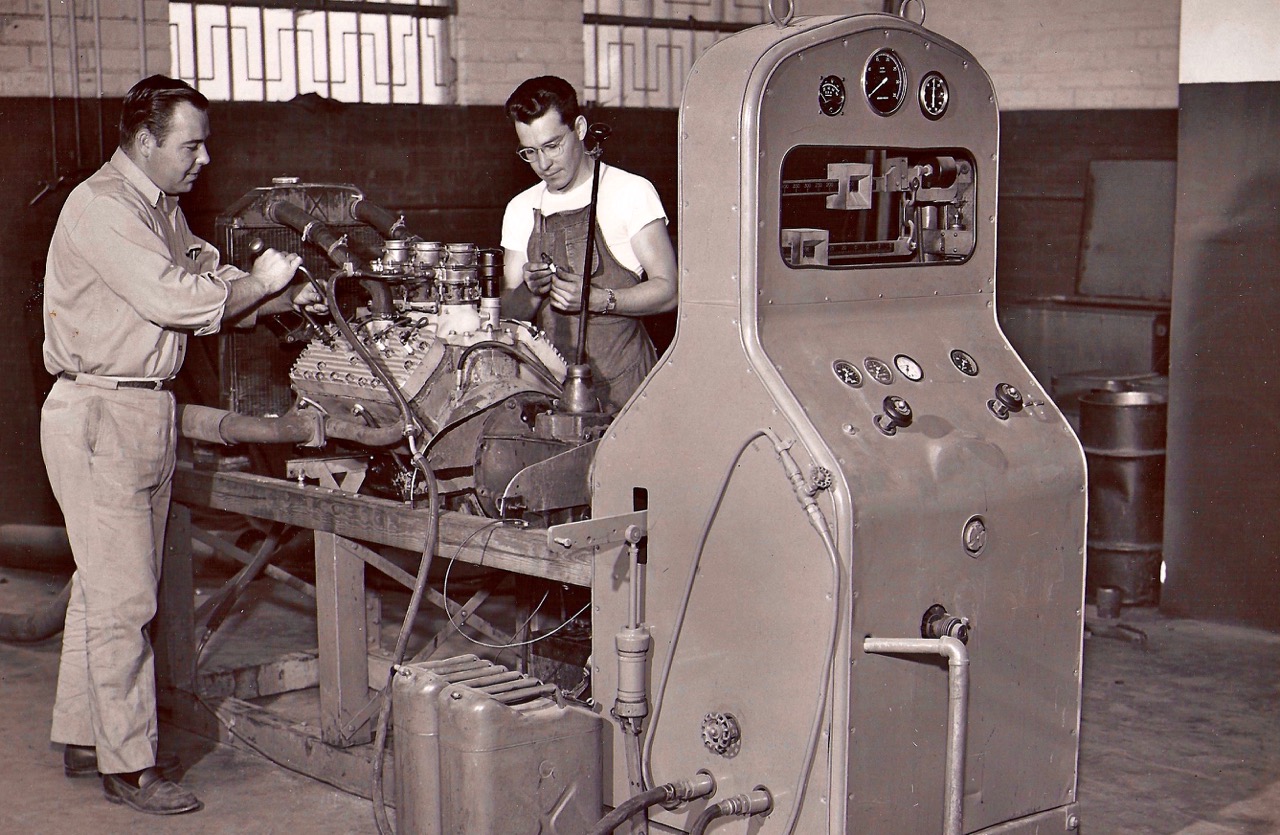 Ford’s Flathead V8 revolutionized the hobby, fed explosive speed shop growth, and gave birth to speed equipment manufacturers that would completely change the go-fast culture. Many of those names (brands) are still with us today and can see them on traditional “old-school” hot rod, and Specials competing in Historic Pre-War class road racing.

As early as the 1930s, Ford was capitalizing on what would become known in the 1960s as “Win On Sunday, Sell On Monday” marketing. A major win at the 1933 National Road Race in Elgin, IL established Ford as a feared competitor in road racing. Savvy dealers wasted no time bragging about Ford’s win in the Nationals in local advertising. This drove customer traffic and V-8 model sales. Almost instantly new V-8 Ford roadsters could be found, less mufflers and fenders, tearing up racetracks. The 1932 Swedish Winter Grand Prix was won by two mechanics driving a Ford V-8 Special. McClurg focuses on how Flatheads changed racing, from local drag strips and dry lakes to Indy (Miller-Ford Specials) and beyond our borders. 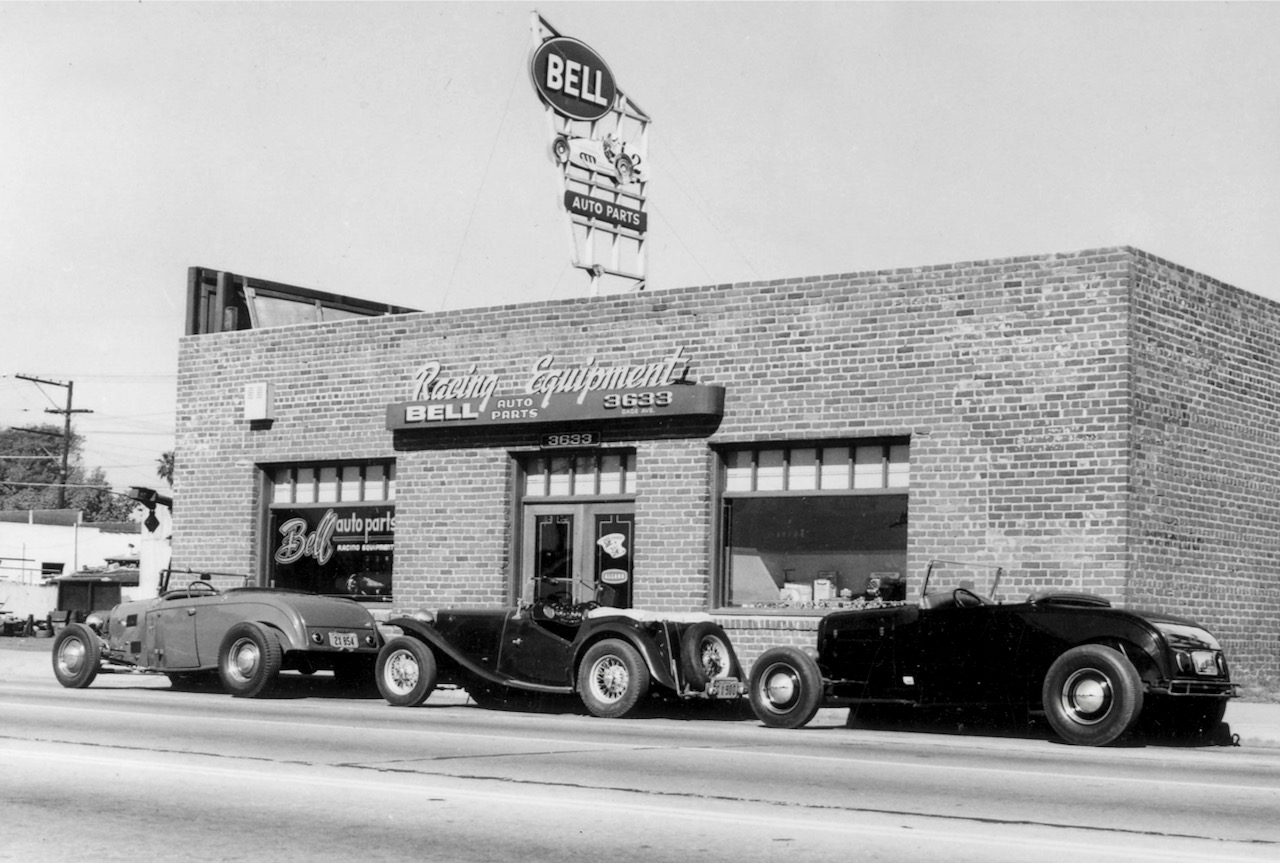 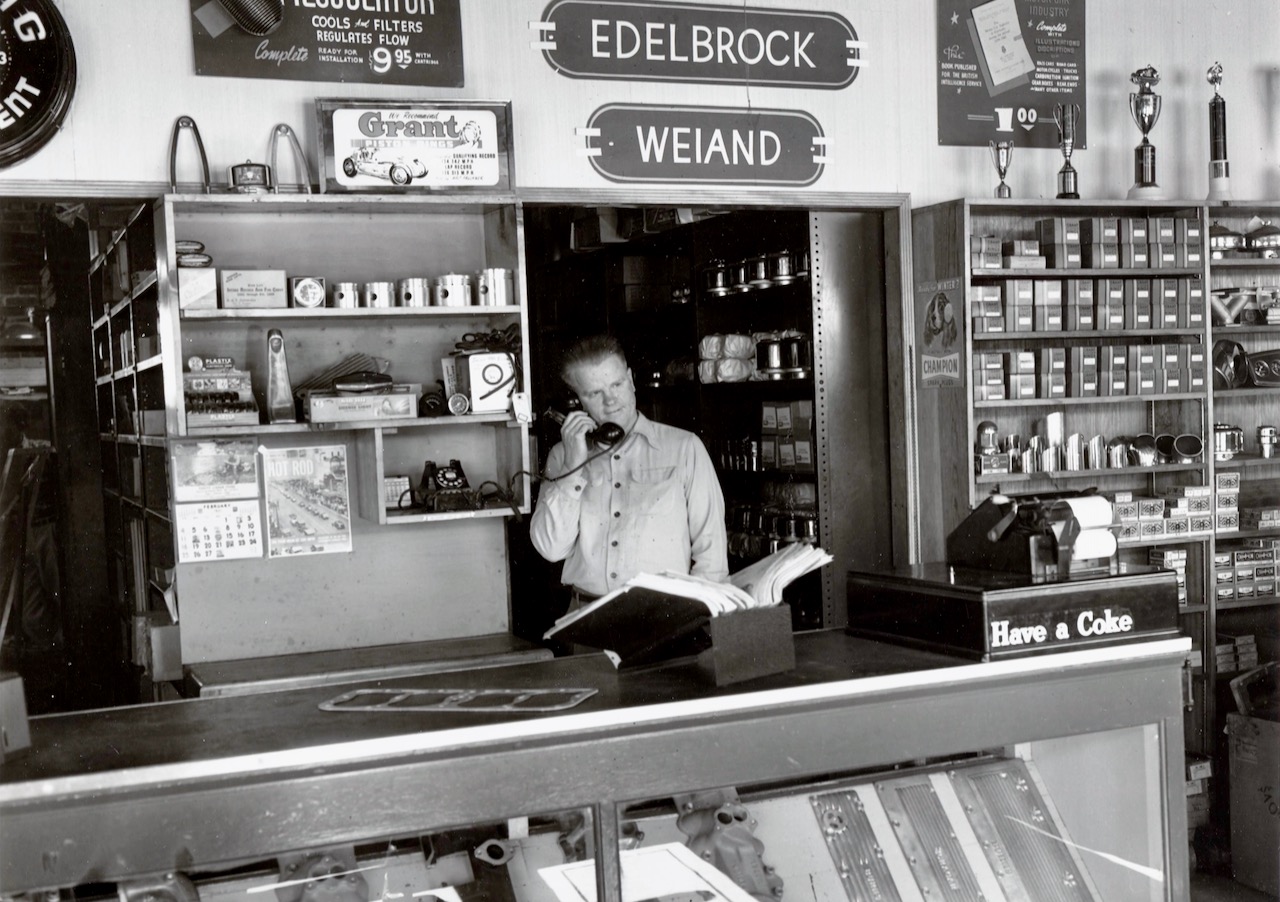 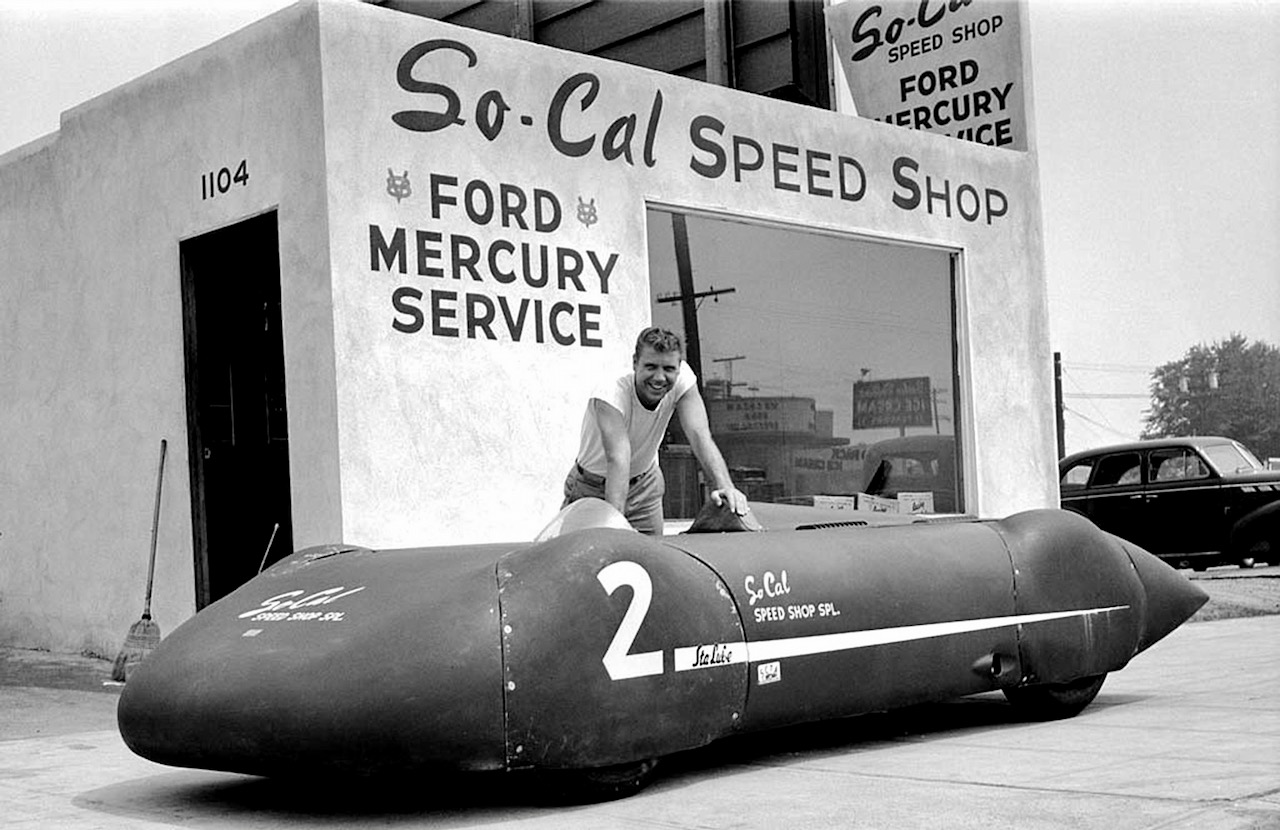 After World War II, hot-rodding, racing and the speed equipment industry experienced incredible growth. As the dry lakes became less and less available for racing, the popularity of quarter-mile drags surged. It would not be until 1950 that the first organized track, Santa Ana Drag Strip, would open on a Southern California airfield. In 1951 Wally Parks, then Editor of HOT ROD and founder of the National Hot Rod Association, produced the first official NHRA race at the Los Angeles Fairgrounds in Pomona, California. The Flathead also distinguished itself in NASCAR competition. Jim Roper, driving a Lincoln, won the first NASCAR race on June 19, 1949 at Charlotte Speedway. 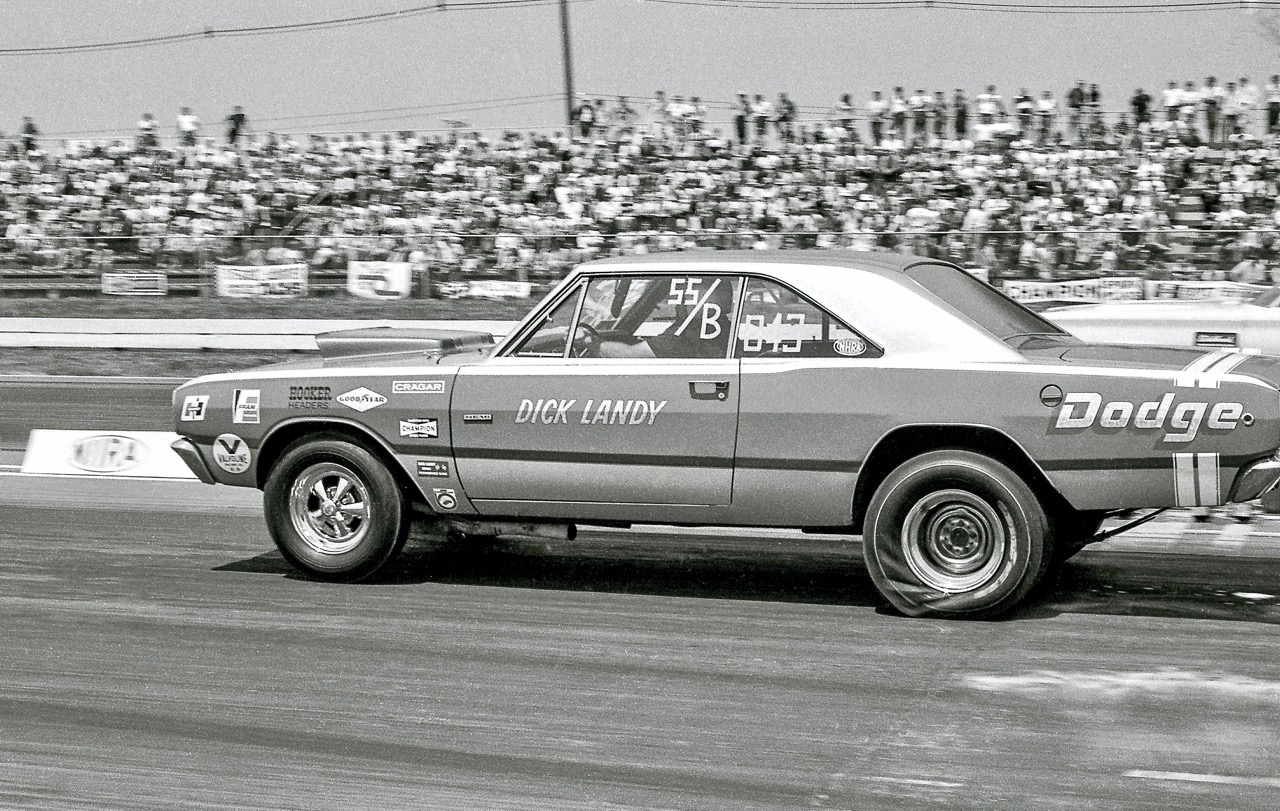 FIVE-STAR: THE AMERICAN SPEED SHOP also documents how OHV V8s changed the course of both street and track performance, 1960s and 1970s:  gas and fuel drag racing, the birth of funny cars, Detroit’s Super/Stocks and FX racers, and how the popular Mom & Pop speed shops had to keep up with changing times – big distributors selling retail and today’s online giants. High-profile racecars, drivers and speed shops that you might be familiar with – and many you may not – are covered in detail by McClurg, including rare vintage photography. 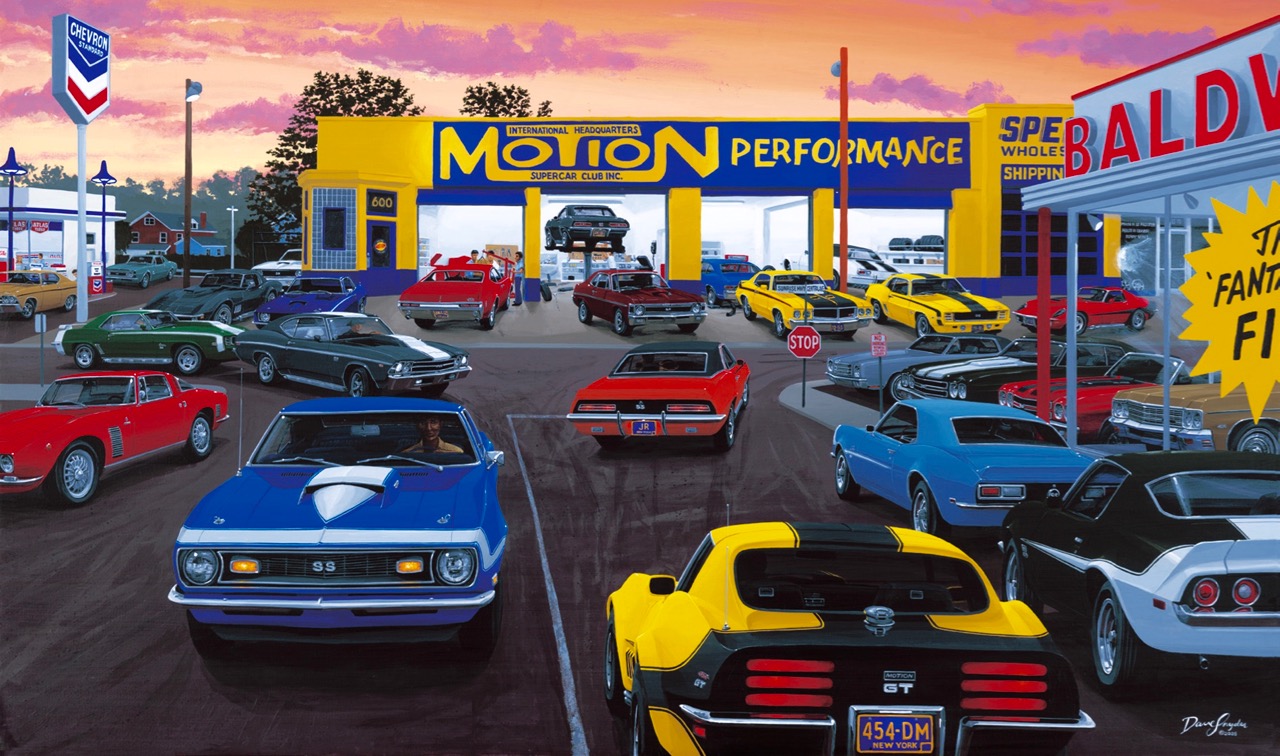 One of the phenomena of the mid-1960s through mid-1970s was the unique marriage between a full-service speed shop specializing in dyno-tuning – Joel Rosen’s Motion Performance and a small, neighborhood Chevrolet dealer, Dave Bean’s Baldwin Chevrolet in Baldwin, LI, NY – that generated head-turning and crazy-fast 1967-1974 Camaros, Novas, Chevelles, Corvettes, and even some Biscayne Street Racer Specials. The brand was Baldwin-Motion and you could order a brand-new Chevy powered by a 427-454 big-block engine that could be equipped with mild to wild speed equipment plus suspension and cosmetic options. Turn-key racecars were available as well. No brand in the history of the genre offered more performance and customization options, and for some models, a written performance guaranty! 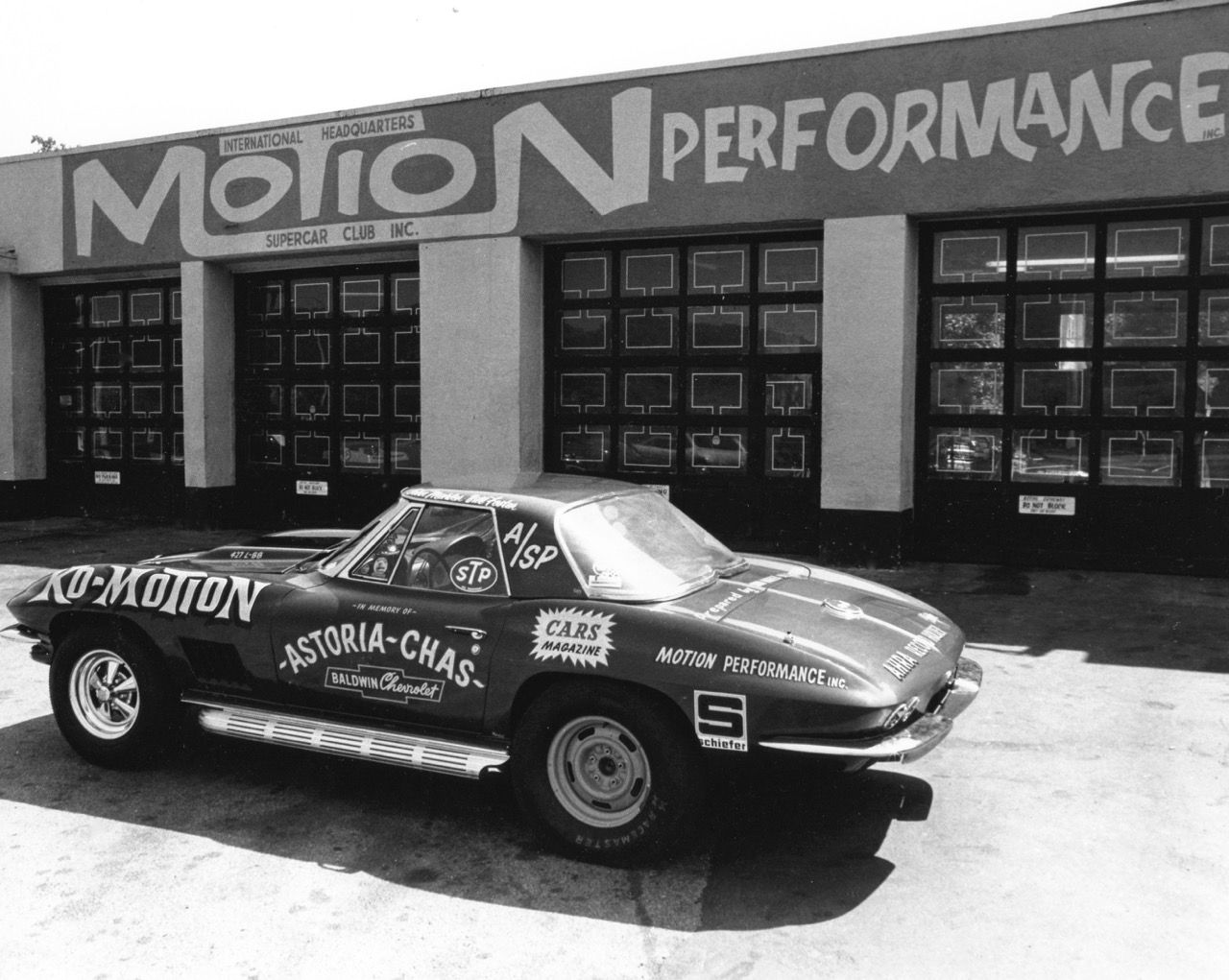 McClurg devotes a lot of space to Motion Performance/Baldwin-Motion, its speed shop services, unique performance products and its record holding racecars that were sponsored by Hi-Performance CARS Magazine. Baldwin-Motion’s competition in the field of dealer-built modified Chevys included Yenko Chevrolet, Nickey Chevrolet, Dana Chevrolet and others are covered as well. 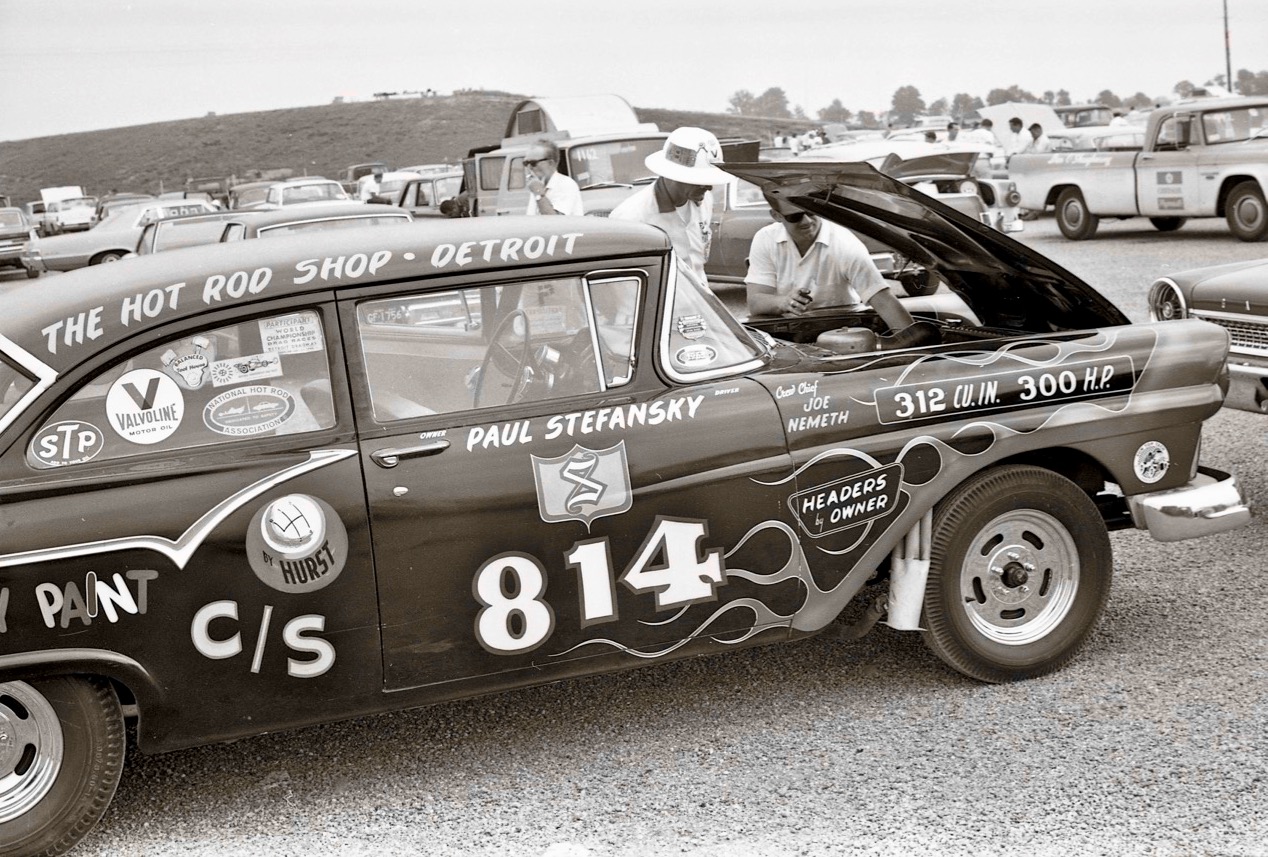 The history of the speed shop is the history of hot-rodding, dry lakes competition and drag racing in America and, nobody tells it better than Bob McClurg. I came of age in the hobby when the Flathead was still very much the choice of hot rodders, owned a customized ’40 Mercury convertible sedan powered by a dual carb, dual exhaust Flathead, and this book really talks to me! I’m proud to see my name listed on the book’s ACKNOWLEDGMENTS page. Best of all, it showcases incredible rare vintage and modern photos, generously contributed by Gregg Sharp, NHRA Motorsports Museum and private collections. It doesn’t get any better; I give it five stars!