Seven years after launch, Jaguar has given its athletic F-Type two-seater a mid-cycle makeover to sharpen its lines and re-boot its appeal. Road Test Editor Howard Walker takes the 380-horsepower DYNAMIC DRIVING: ’21 JAGUAR F-TYPE R-Dynamic for a spin. 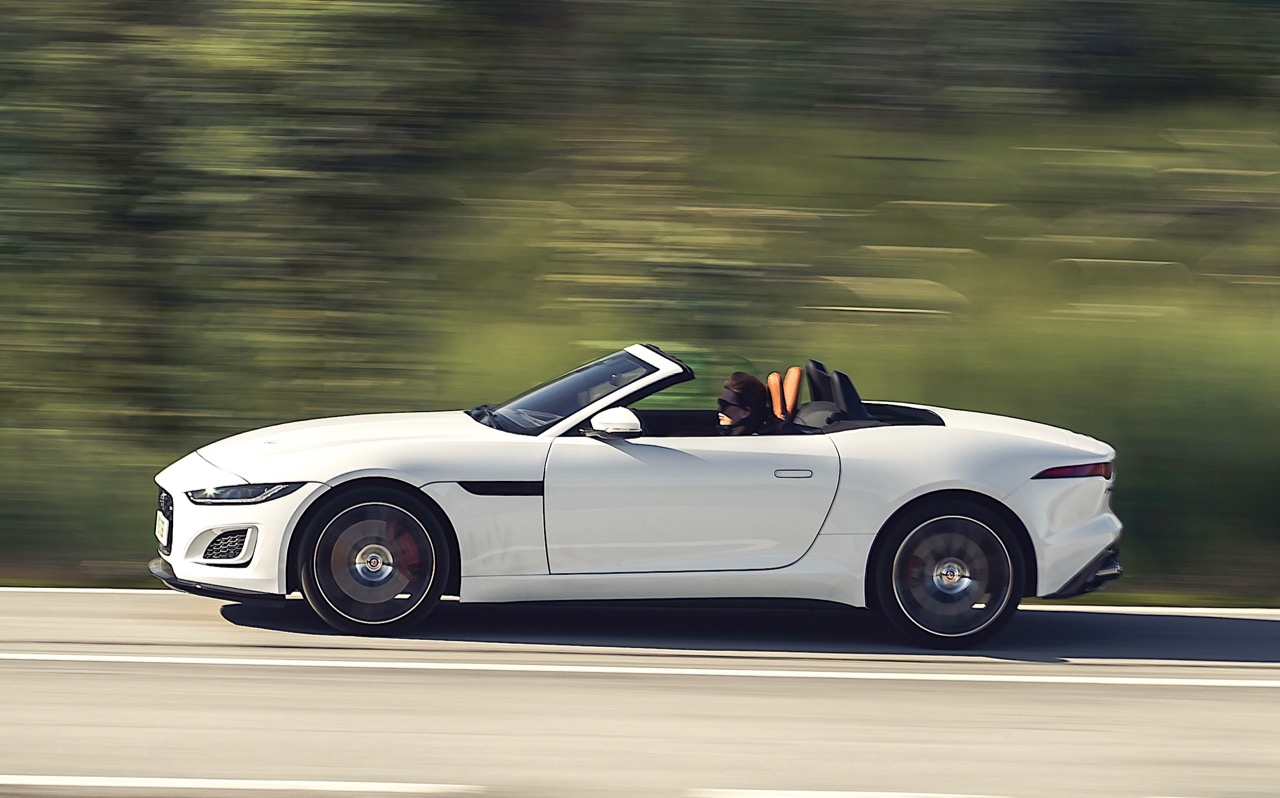 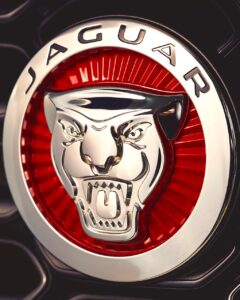 OK, so let’s get the kitty-cat puns out of the way before we drive.

Yes, Jaguar’s newest-generation F-Type convertible could well be the purr-fect sports car with its fur-midable performance and paws-itively awesome handling. Certainly it’s a drop-top two-seater that’s up to scratch.

Just how fast is it? Let’s say it can claw it’s way to 60 mph in a whisker under five seconds. I’m kitten you not. When your logo is a leaping cat and the badge on the front is known affectionately as the “growler”, you have to expect some feline-centric punnery. Hiss-terical, right?

It’s been seven long years since Jag debuted its curvaceous, more driver-focused F-Type. I still miss its predecessor, the still-gorgeous XK. But at the time, Jaguar wanted to get back to its E-Type roots and trade comfy grand touring for a more purist sportscar. It was mission accomplished. The F convertible and coupe brought new buyers into the fold who’d never before considered a Jag. After seven years though, it was time for a mid-cycle refresh, a nip, tuck and jab of Botox. 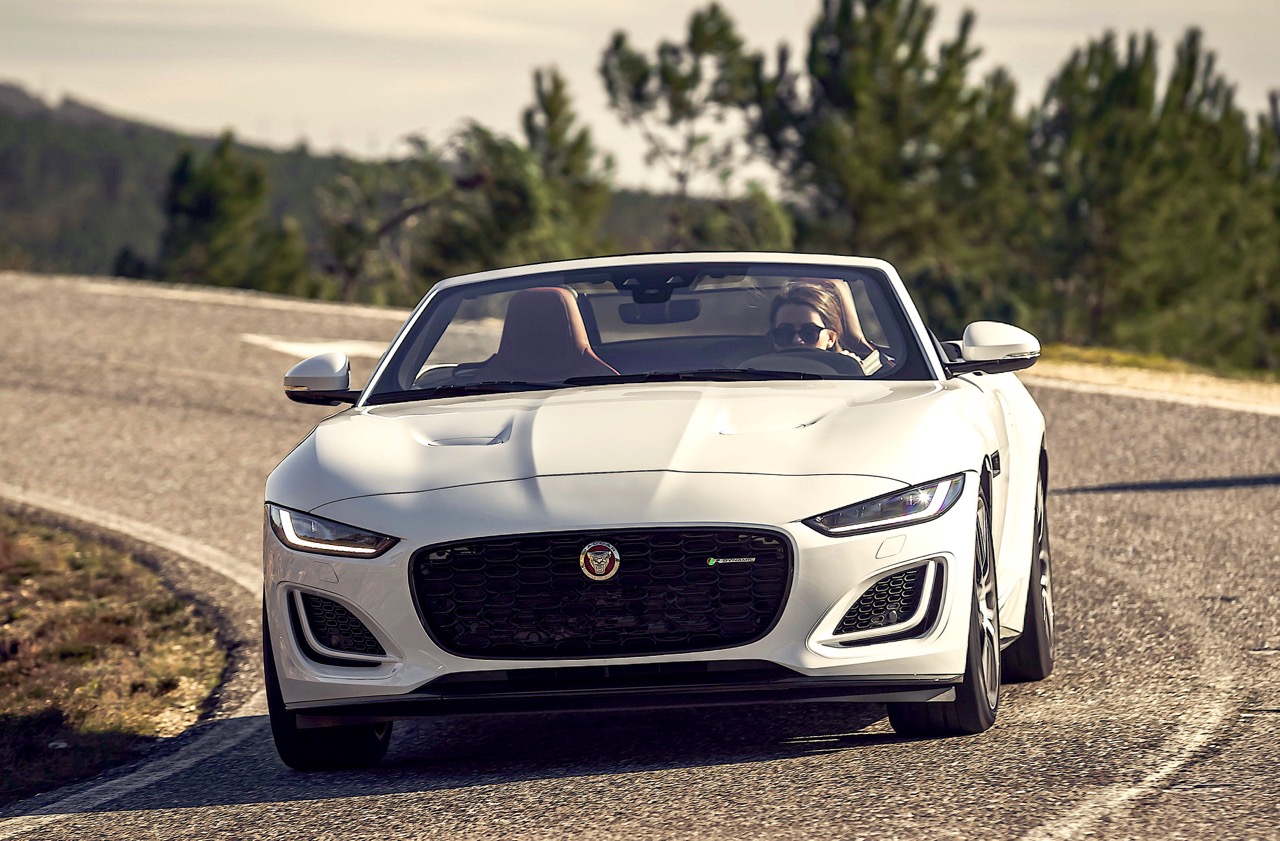 The biggest change is to the “face”. There are new, razor-thin, more horizontal LED lights, and a restyled grille that’s taller and slightly squarer. New, bigger lower intakes too, with lovely J-shaped aero blades. Add in a more curvy hood, plus new side vents with that leaping pussy-cat logo and it gives the car a brooding, more forceful look. It’s a nice improvement over the previous, slightly smiley-face vibe. 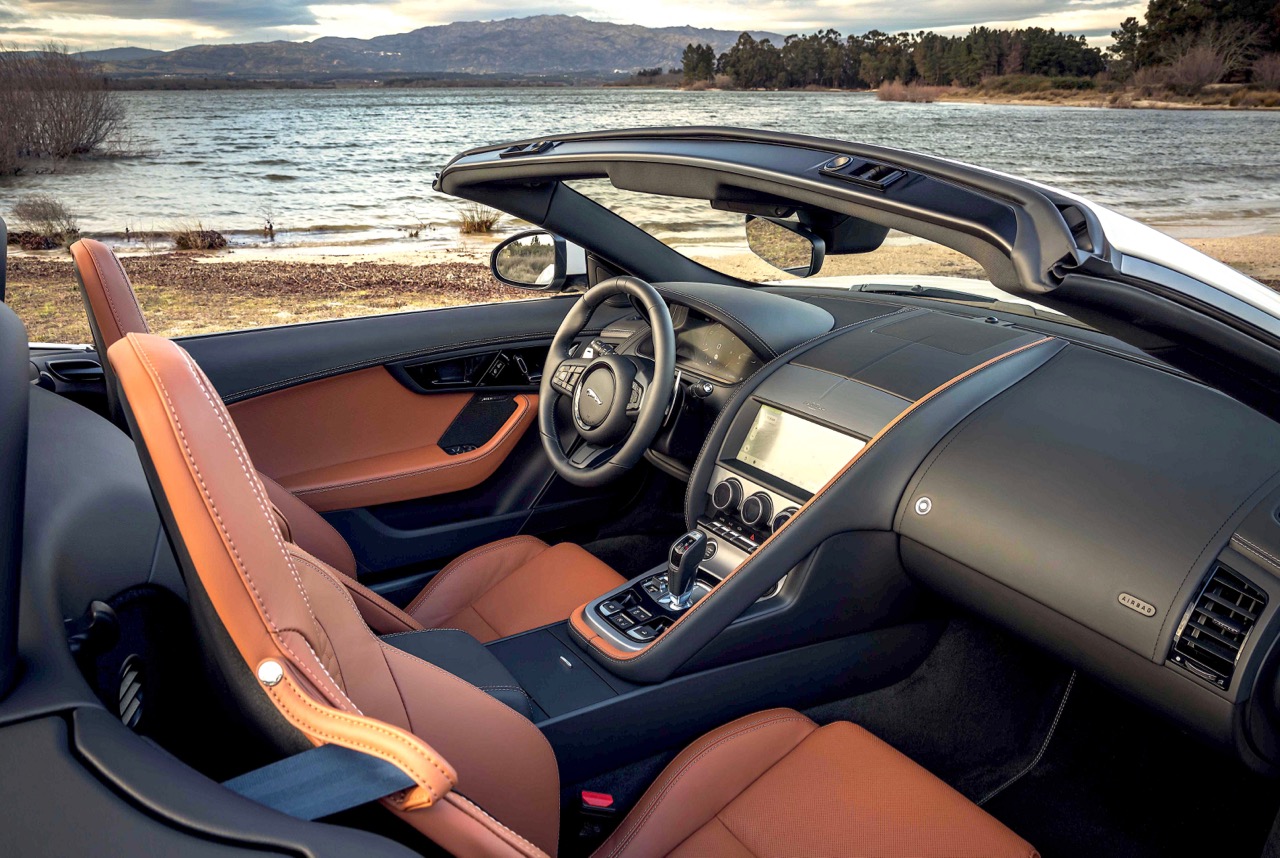 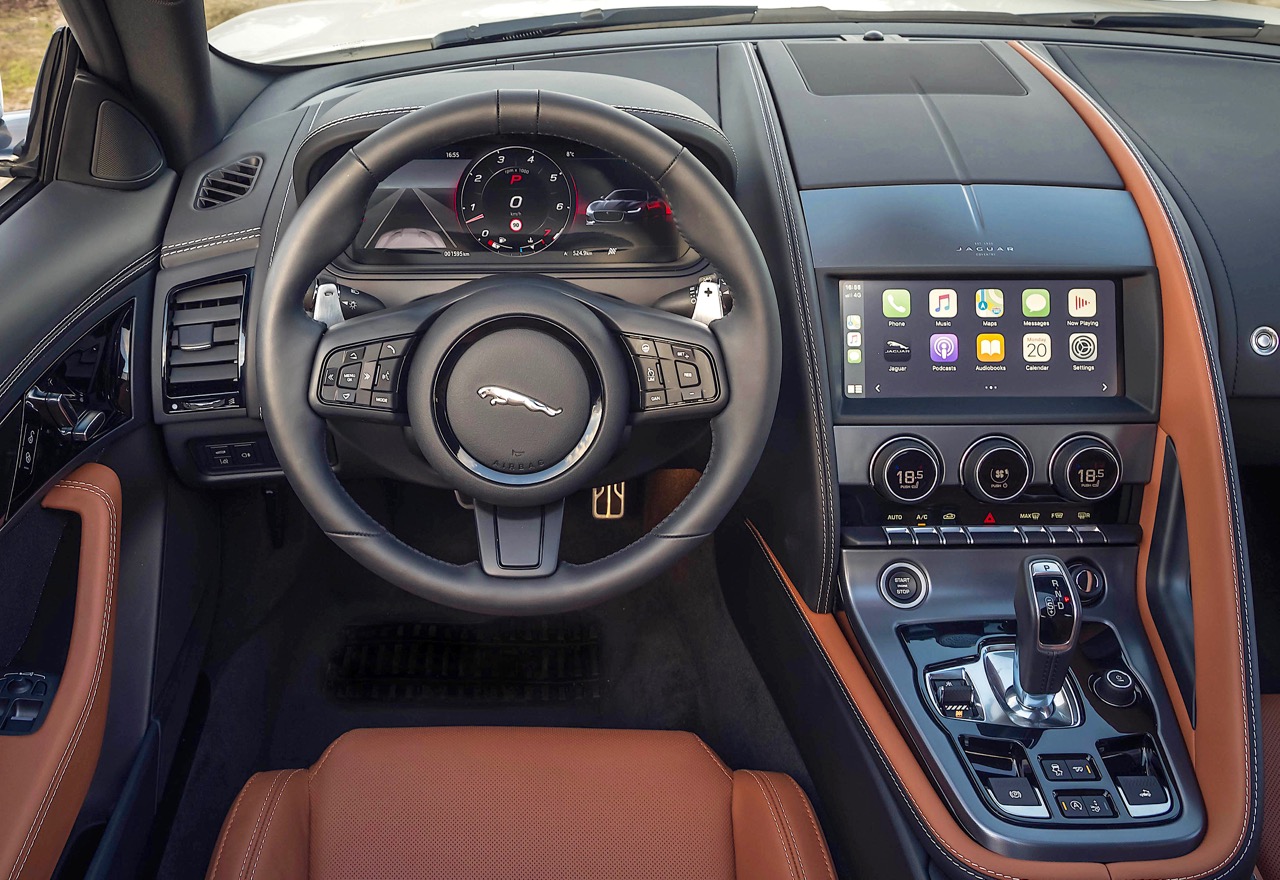 Pop open a door, slide behind the wheel and the cabin feels as cozy and cosseting as before. The big change here is the addition of a new 12.3-inch digital gauge cluster behind the steering wheel. Carried over from other Jaguar models, it’s a big improvement in visual clarity. 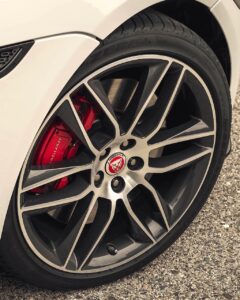 One press of the bright red “start” button – yes, it still throbs like a beating heart – and the big V6 barks into life like a junkyard pit-bull. With the F-Type, Jaguar has turned exhaust roar into an art form. With the V8 F-Type R, it’s almost to the point of silliness, with all its obnoxious pops and bangs and snarls. The V6 dials it back a notch, yet there’s still a cacophony of throatiness that bellows through its twin Howitzer-like tailpipes, still the snap, crackle and pop when you come off the gas.

Just as before, the DYNAMIC DRIVING: ’21 JAGUAR F-TYPE R drives like a dream. It checks every sportscar box – blistering performance, go-kart handling, squirrel-like agility and laser-precise steering that feels like it’s hard-wired into your gray matter. Off the line, it’ll rush to 60 in 4.9 seconds and not quit accelerating till the speedo is showing 171 mph. And with 339 torques on tap, it pulls like a Peterbilt, whipping past slower traffic and catapulting out of tight curves. Jag engineers have done a lot of suspension tweaking and electric steering recalibrating to sharpen the handling even more. But it’s been done without sacrificing the car’s magic carpet-like ride. 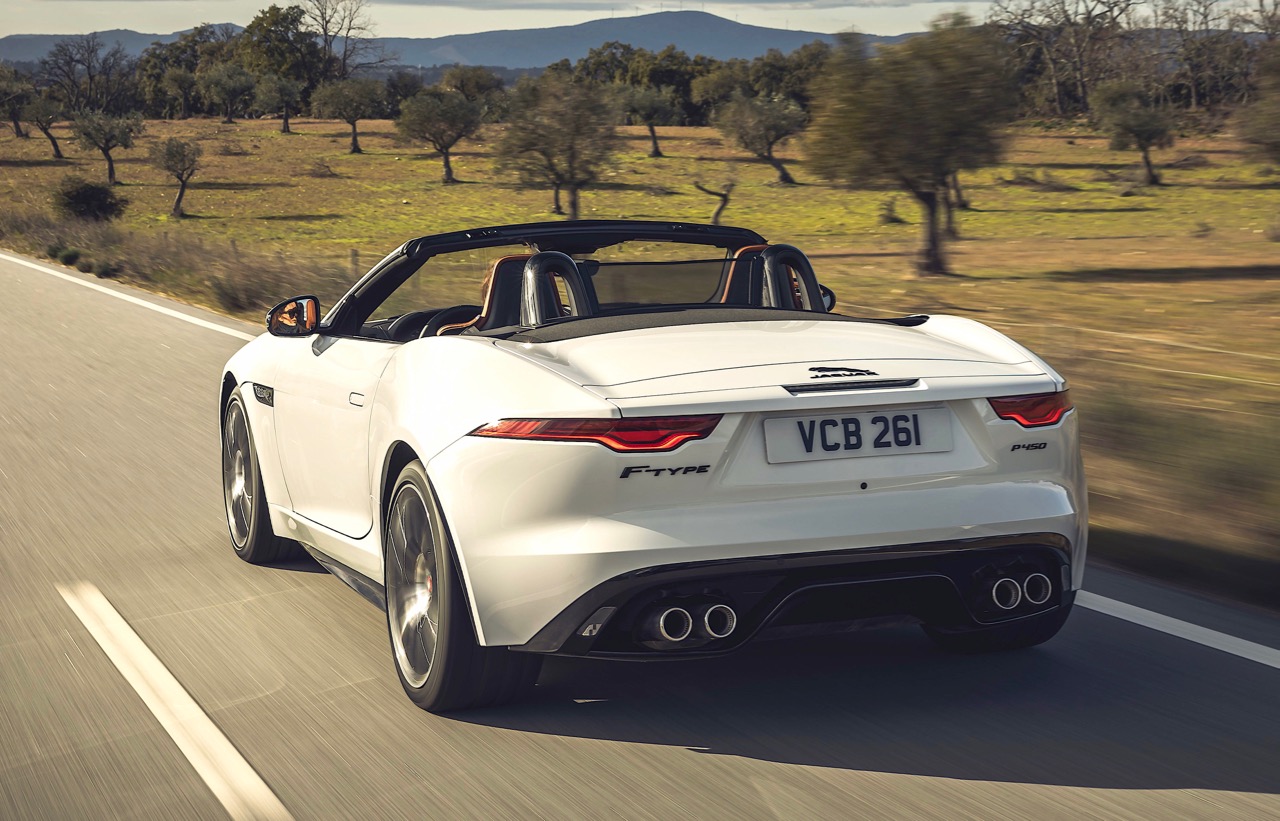 Yes, the cabin will still be cramped for taller drivers, the trunk in the convertible is teeny, and $85-grand when you can (theoretically) get a new mid-engined Corvette with a removable roof for around $60,000, is not great value. But just remember, even at $85,000, that’s way less pricey than any Furr-ari!

For more information about the DYNAMIC DRIVING: ’21 JAGUAR F-TYPE R and the full range of models, please visit https://www.jaguarusa.com/all-models/f-type/index.html