It may have started out as an updated 348-inch truck engine, but it ended up as the CHEVY 409: BIG-BLOCK LEGEND! 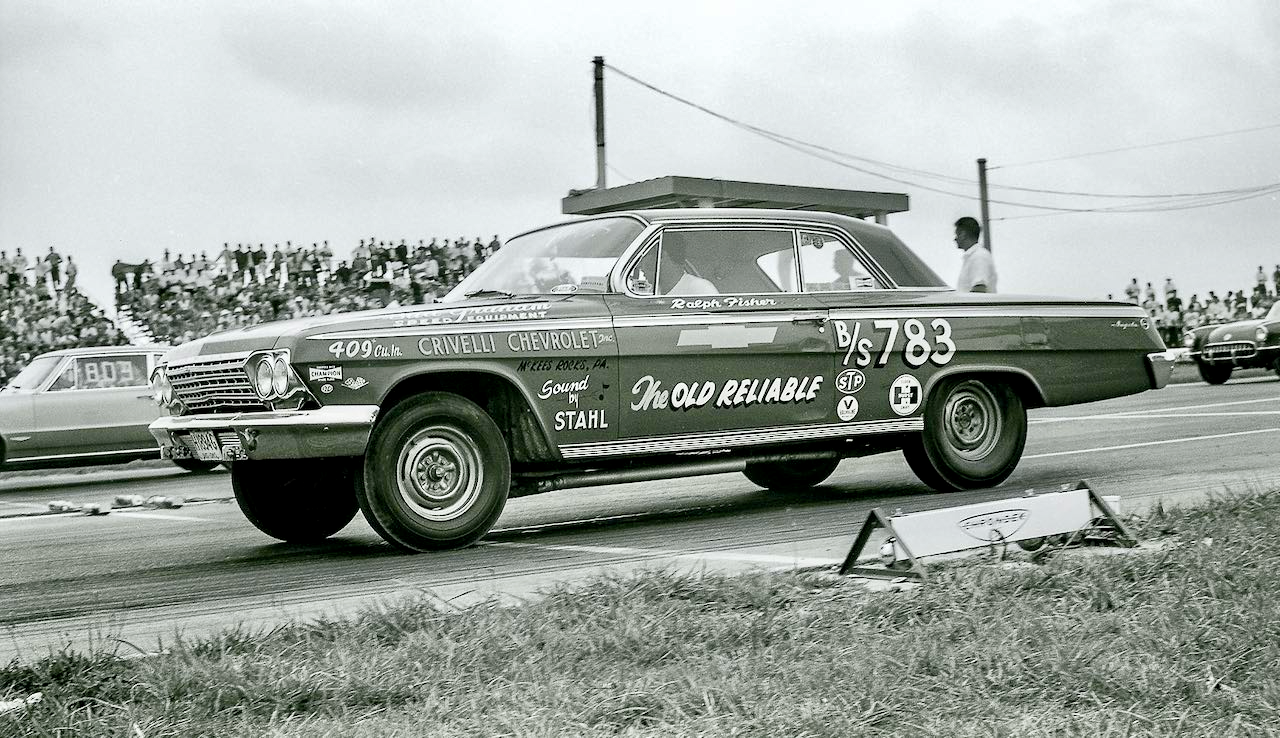 Two years before the Supercar hype and big-engined midsize cars, full-size ’62 Chevys, powered by 409-inch versions of the 348 W-Series passenger car and truck engine, carried the Musclecar banner for Chevrolet. While the engine first surfaced in the 1961model year, it was a late arrival. Just 142 Chevys with RPO-580 360-horsepower, single-four-barrel (Carter AFB) and solid-lifter-cammed 409 engines were produced. With 409 pound-feet of torque coming in at 3,600 rpm, performance was outstanding. 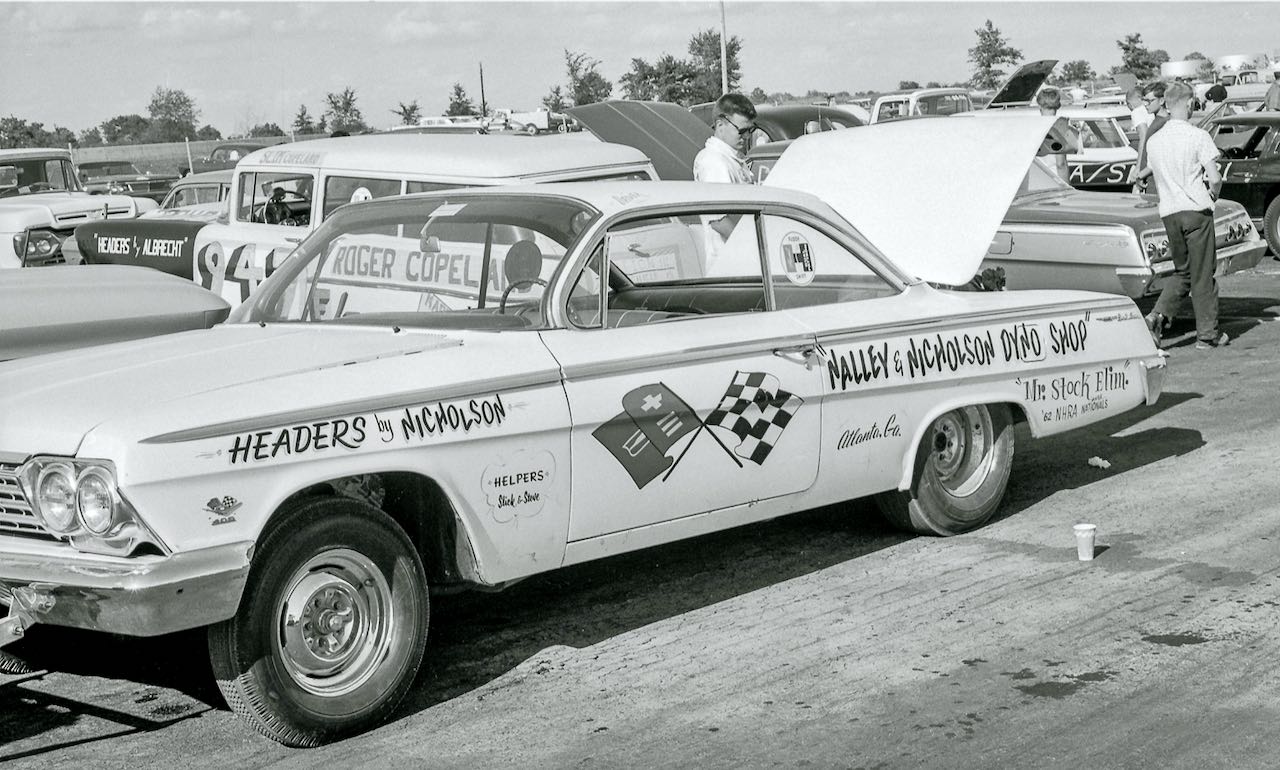 One of the first 409s built, a Bel Air model, went to “Dyno Don” Nicholson. He waded through an incredibly tough field at the 1961 NHRA Winternationals in Pomona, CA to win Stock Eliminator in his brand-new car.  He was later disqualified because his engine had the latest GM valve springs and carburetor that had not yet been approved by NHRA. To help create a performance image quickly for its new powerplant, Chevrolet supplied the 409 engines to racers – so there were a lot of them out there.

In road racing competition in the U.S. and the U.K., Dan Gurney campaigned a ’61 Impala powered by the 409/360 engine. It was fitted with factory “Police & Taxi” suspension, quick steering, metallic brakes and Goodyear road-race tires mounted on wide NASCAR steel wheels. Bill Thomas blueprinted the engine and set up the chassis. Gurney broke the lap record at Riverside Raceway, set by Dave McDonald in a fuel-injected Corvette and had a field day in Sedan racing in the U.K. 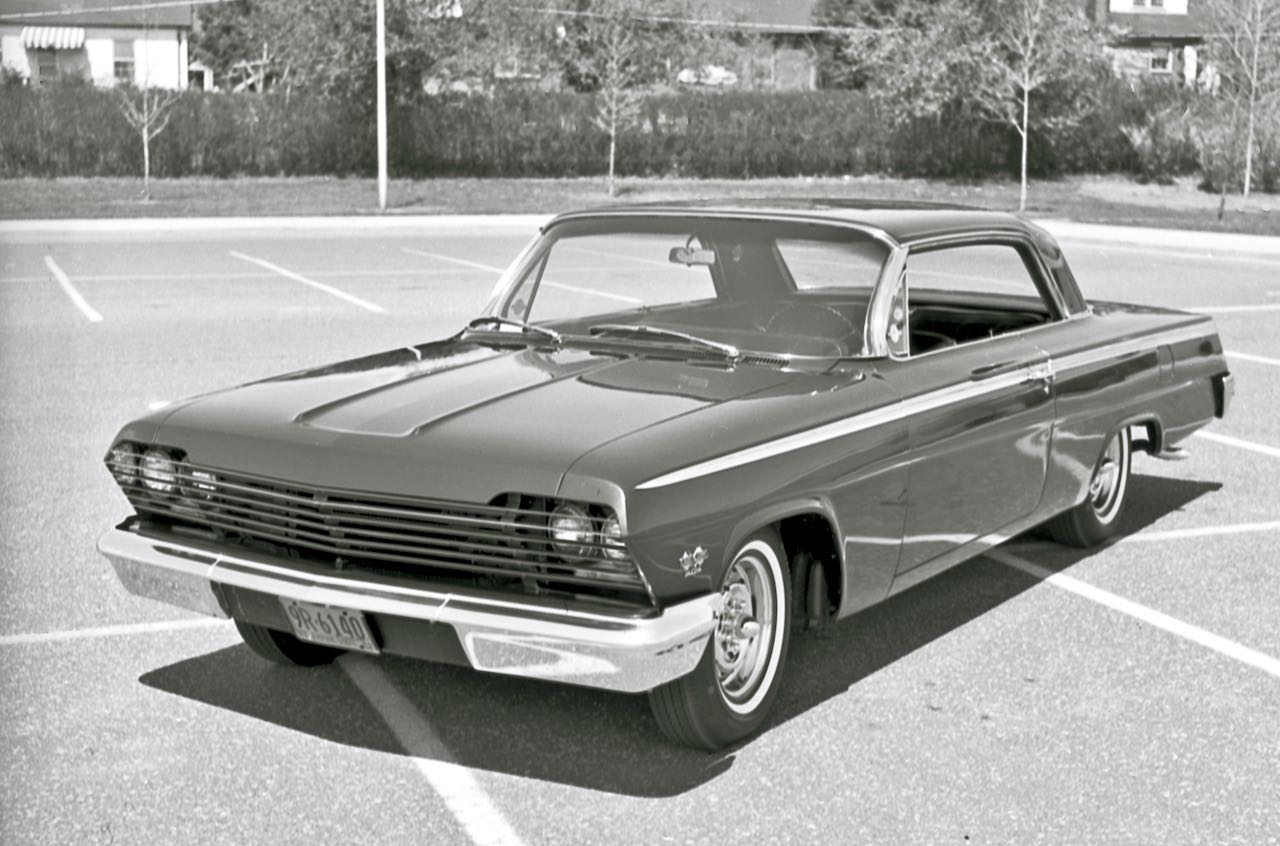 On the flip side of Surfin’ Safari (Capital Records), 409 got an incredible amount of airplay and probably influenced more than a fair share of sales of ’62 Chevy 409s. Almost 9,000 of them were sold in 1962 and I think you would have been hard-pressed to find purchasers who were not familiar with Brain Wilson and Gary Usher’s lyrics, “She’s real fine my 409”, and did not save their pennies and dimes to buy a brand new 409!  Wilson recorded the intro exhaust sounds while Usher revved up the engine in his ’62 409 Impala!

The key players at Chevrolet responsible for the CHEVY 409: BIG-BLOCK LEGEND, and the 427 iteration (Z11) in 1963, were project chief, John T. Rausch, and key assistants, Howard H. Kehrl and Don McPherson. They were three of GM’s top engine engineers who went on to work on some of the most iconic performance engines. 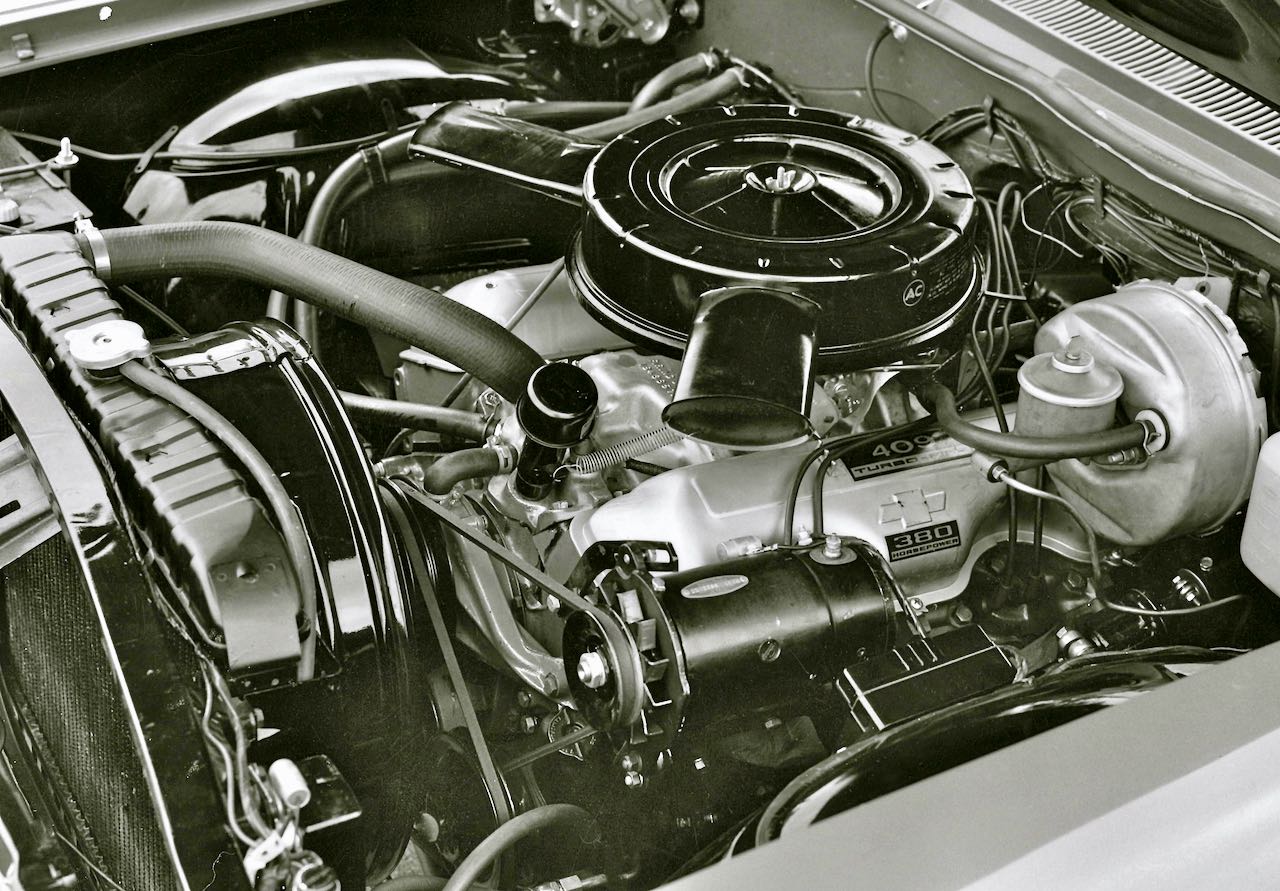 Essentially a bored and stroked (4 5/16 x 3 ½ inches) 348-W engine used in passenger cars and trucks, the first 409 was a strong street motor that was long on low-end and short on top end torque. Standard equipment included a forged steel crank and .440/.440-inch lift camshaft. Weighing in at approximately 665 pounds, a 409 big-block was just 35 pounds heavier than the base Six! It’s potential as a race engine was enhanced when Chevrolet came out with a Service Package upgrade in mid-1962. Many of the parts in the package had earlier been sent to factory “supported” drag and NASCAR racers. 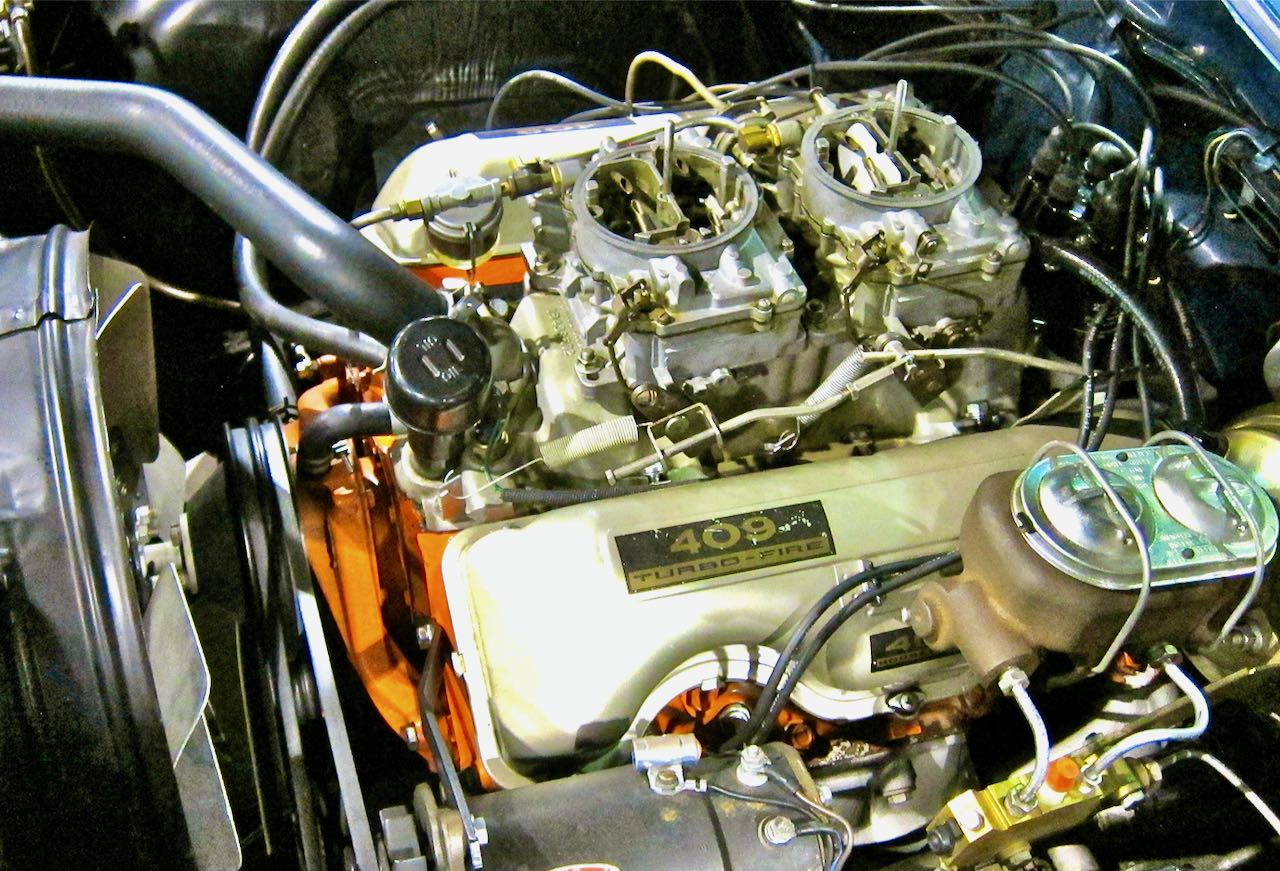 Chevy’s top performance 409 for 1962 boasted dual four-barrel Carters with progressive linkage on an aluminum manifold, 11.0 -to-1 pistons, improved heads with 2.20-inch intake valves and larger ports, high-lift camshaft with solid lifters, stiffer valve springs and a 75-psi oil pump. The actual compression ratio of the 409/409 was 11.04-to-1 with 83-85 cc combustion chambers. With two factory-installed head gaskets on each engine bank, chamber capacity would reach 91 ccs and the compression ratio would drop to 10.20-to-1 for street driving.

Some of the components of the 1962 ½ 409 Engine Service Package #3822953 included a new dual-point distributor, .480-inch lift camshaft, improved single four-barrel aluminum manifold and Carter #3345-S carburetor. It was primarily geared to upgrade the 380-horsepower engine. 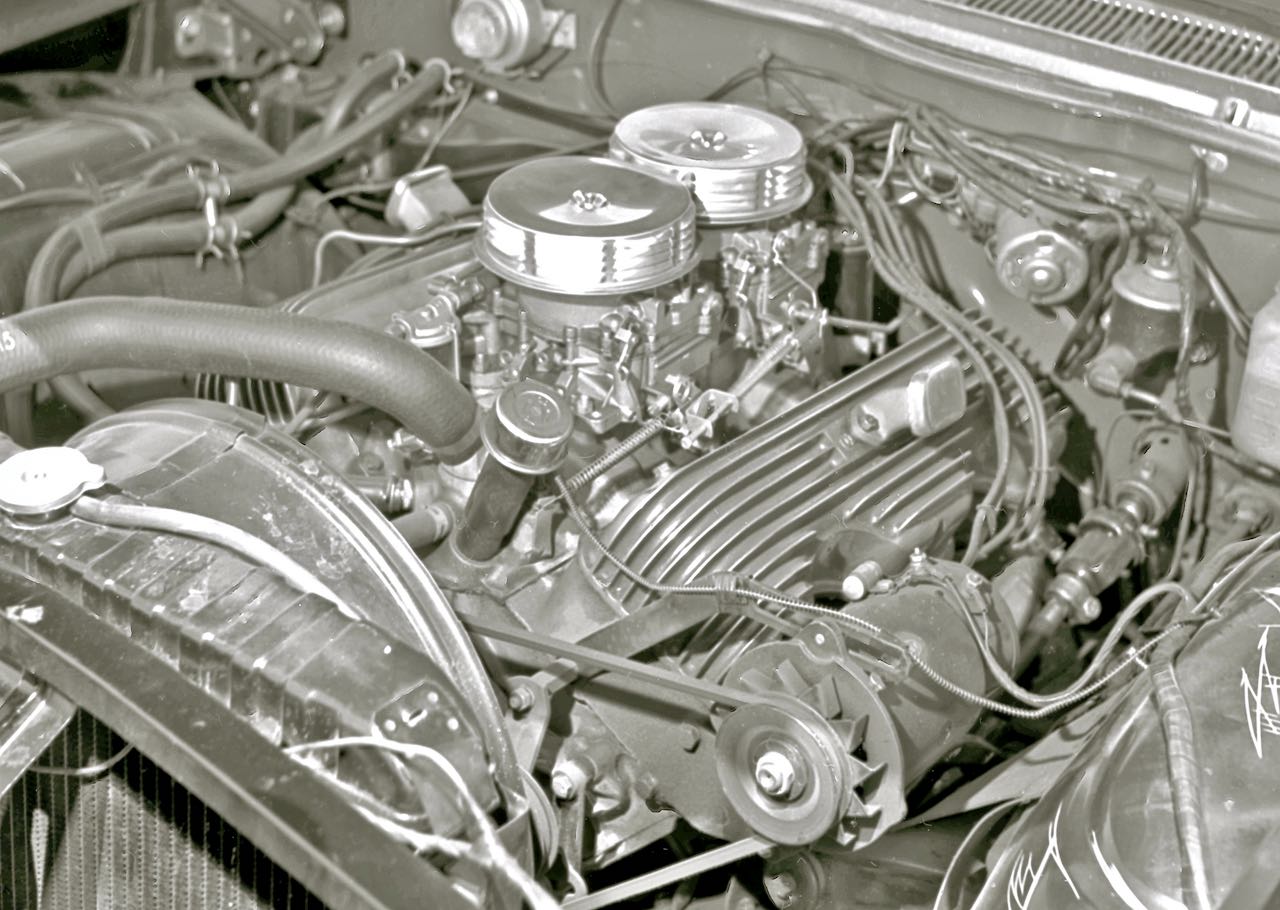 Considering the engine was only available in full-size models, including convertibles with or without RPO-240 Super Sport (SS) trim, real world street performance was impressive. I recall going to Westhampton Raceway on Long Island to do some stories and check out some new 409 Impalas. We were able to get a couple of owners to allow us to clock some 0 to 60 mph times using a stopwatch.  A 380-horsepower 409 Super Sport Impala with close-ratio four-speed and 3.70 Posi gears could sprint to 60 mph in the low to mid-sevens. Quarter-mile times ranged from 92 to 95 mph in 15.0 to 15.5 seconds. A hotter 409/409 Bel Air with 4.11s and four-speed ran high-14s to low-15s at 96 to 99 mph. Sprinting to 60 mph from a dead stop took just 6.3 to 6.6 seconds. It should be noted that these cars’ engines had headers and were were shod with the ultimate traction tire of the day – Atlas Bucrons!

1962 was a very good year for 409 drag racers and Chevrolet. “Dyno Don” Nicholson won Street Eliminator at the NHRA Winternationals, Hayden Proffitt won Stock Eliminator at the NHRA Indy Nationals and Dave Strickler beat Hayden Proffitt to win Super/Stock. Other popular drag racers like Butch Leal, Hubie Platt and Dick Harrell successfully campaigned 409s in 1962. Most of the A-List racers had direct support from Chevrolet. Records at GM’s Tonawanda, NY Engine Plant show that they produced 15,019 409 engines. 8,909 went to new car assembly and the balance of 6,110 for warranty service and aftermarket sales. 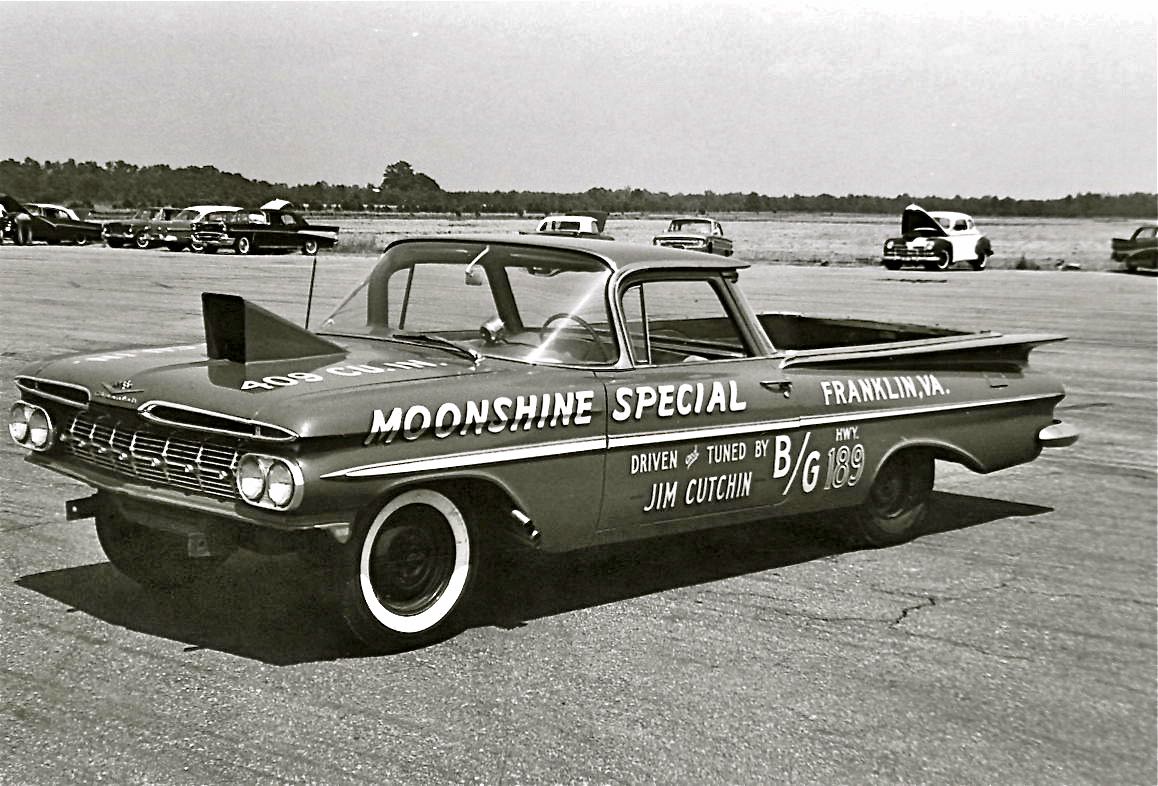 It was a landmark year for the 409 and Chevrolet. The 409/409 with dual quads was the car to beat in 1962, on the street and on the track. For 1963 the top-rated dual-quad 409/409 received a performance bump to 425 horsepower along with chromed valve covers and air cleaner. Chromed engine accessories continued for 1964 and 1965 model years.

When fitted with single Carter four-barrel carburetion, the carryover 409/380 engine was rated at 400 horsepower. Multiple carburetion was discontinued after the 1964 model year. For 1965, 409s were rated at 340 and 400 horsepower before being phased out for the incoming, much-improved Mark IV big-blocks, displacing 396 cubic inches.

The CHEVY 409: BIG-BLOCK LEGEND had its day in the sun and Brian Wilson and Gary Usher absolutely got it right: “Nothing can catch her, nothing can touch my 409, 409!”