Nobody covers a British car show like a British car owner. That’s why we sent Jim Palam, our man on California’s Central Coast, to bring back the best of the Brits for our followers. 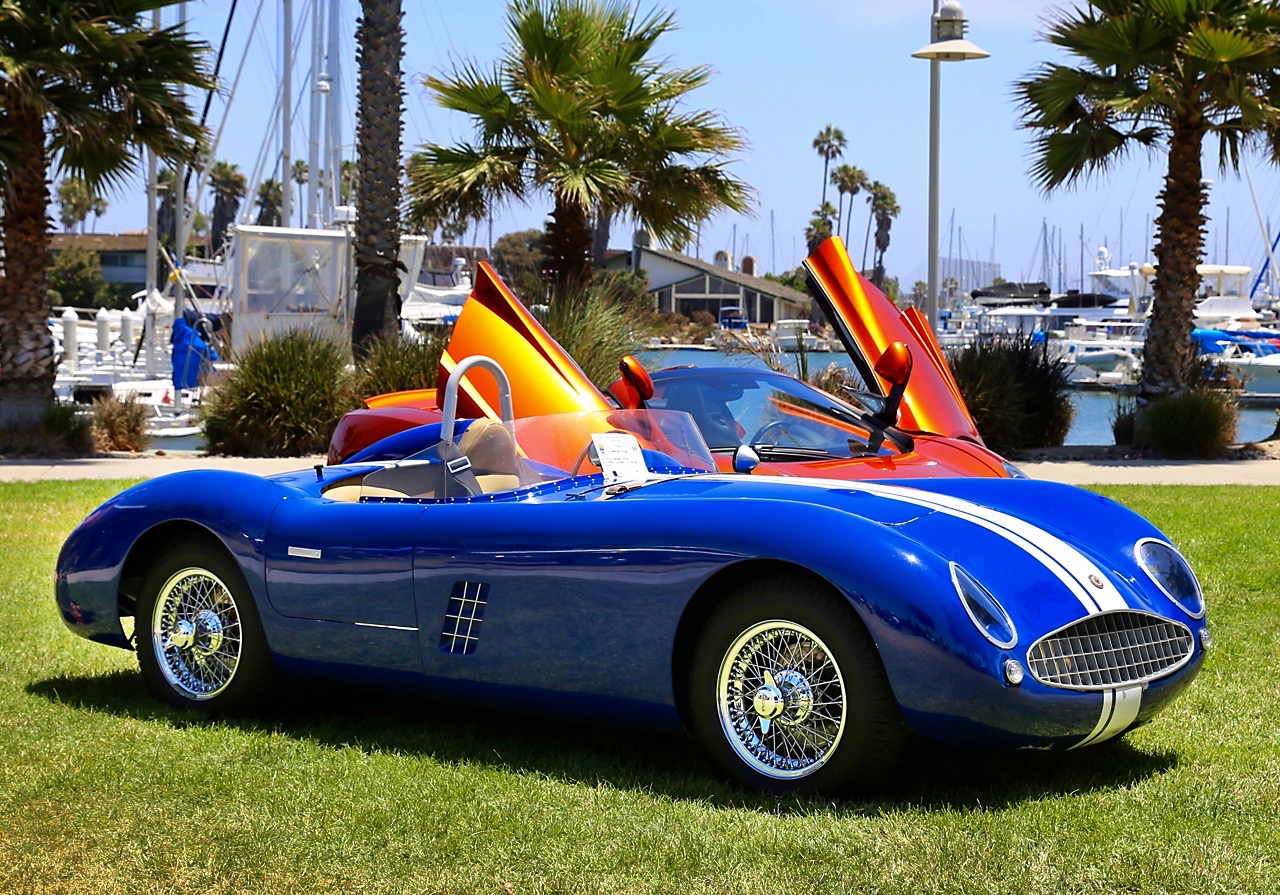 There’s a cheeky joke that goes “Q: Know why the British don’t make computers? A: They couldn’t figure out how to make them leak oil!” As the owner of a vintage British sports car I’m not at all offended by oleaginous humor. For every drop of oil lost on the highway and driveway, I’ve found buckets of joy behind the wheel and under the hood!

So I was quite confident this year’s Central Coast British Car Club Show at Channel Islands Harbor would be bloody cool – and it was. With over 140 Brit cars displayed along the linear park at Channel Islands Harbor in Ventura County, this annual event attracted thousands of attendees and a well-balanced assembly of vintage, exotic, modified and luxury British classics. Check ‘em out.

Mike Zaroudny‘s ‘54 “Sutton Special” Jaguar, top, was brought to life by California builder Jack Sutton, who built it on the bones of an XK120. I’m pretty sure I heard the blazing-orange McLaren parked next to it whisper, “Well done Mate,” as it raised its doors in homage to the Jag! 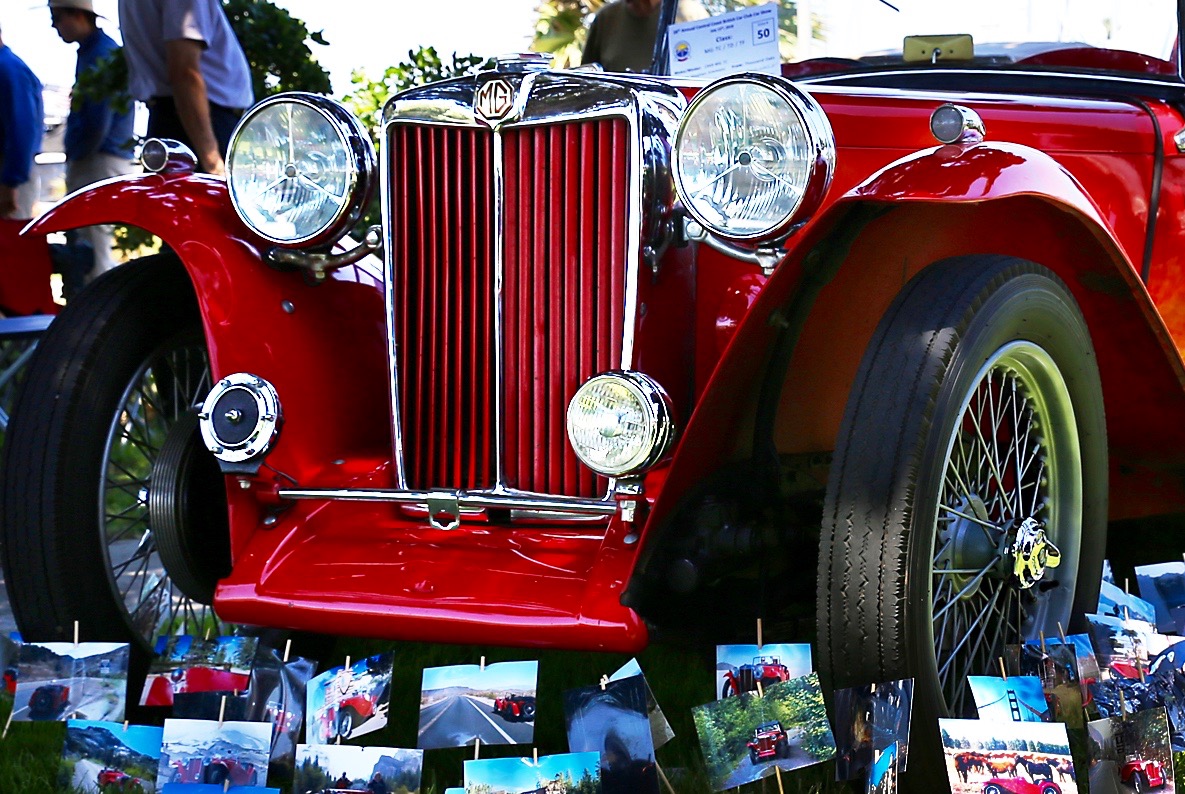 Steven Simmons just can’t sit still. He has driven his dependable ‘49 MG TC near and far and back again. Rather than answer questions about where he’s been with the MG, he now surrounds his get-away car with a spiked photo display featuring images of the TC in picturesque locations around the country. 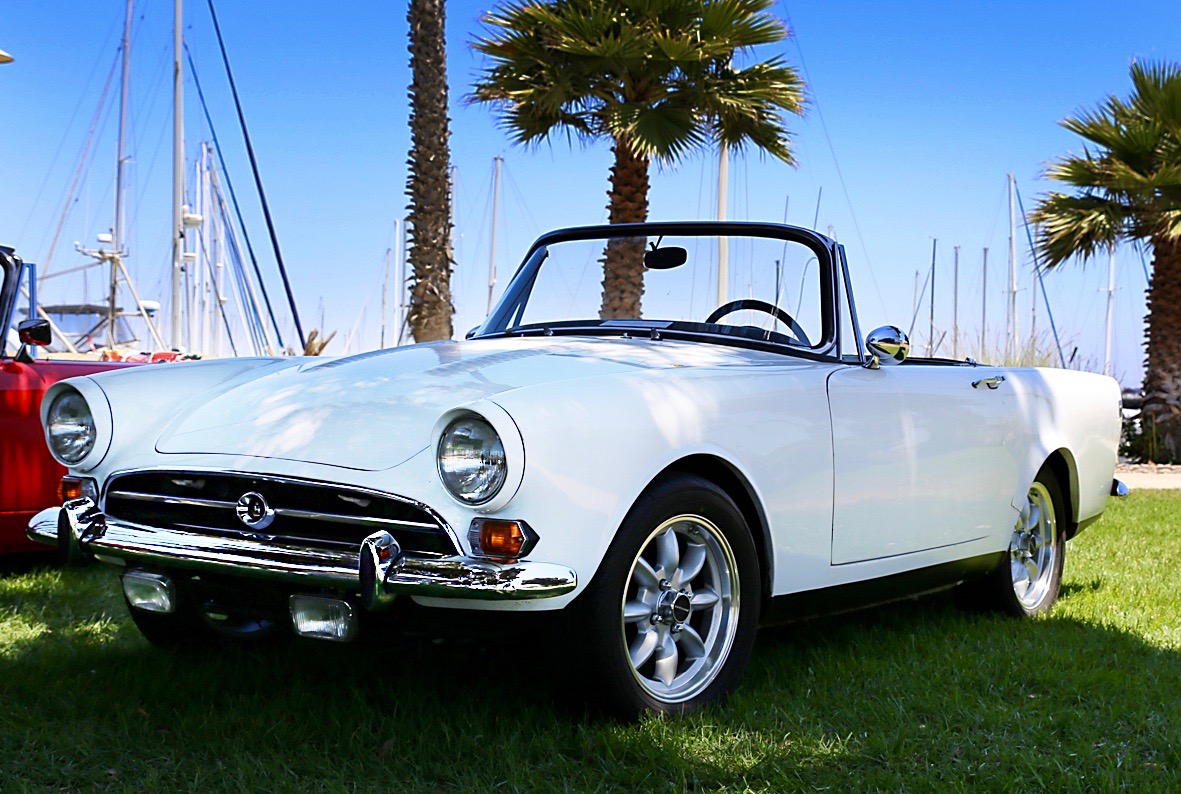 “Hey, there’s a Tiger over there on the grass!” Mike Rizenman’s ‘67 Sunbeam Mark I Tiger seems happier lounging than pouncing. Even with its finicky reputation in the performance department, a Tiger might be the purrfect top-down Brit for your weekend safaris. TV buffs might remember the Tiger Mark I as Maxwell Smart’s car in the campy TV spy series, Get Smart. 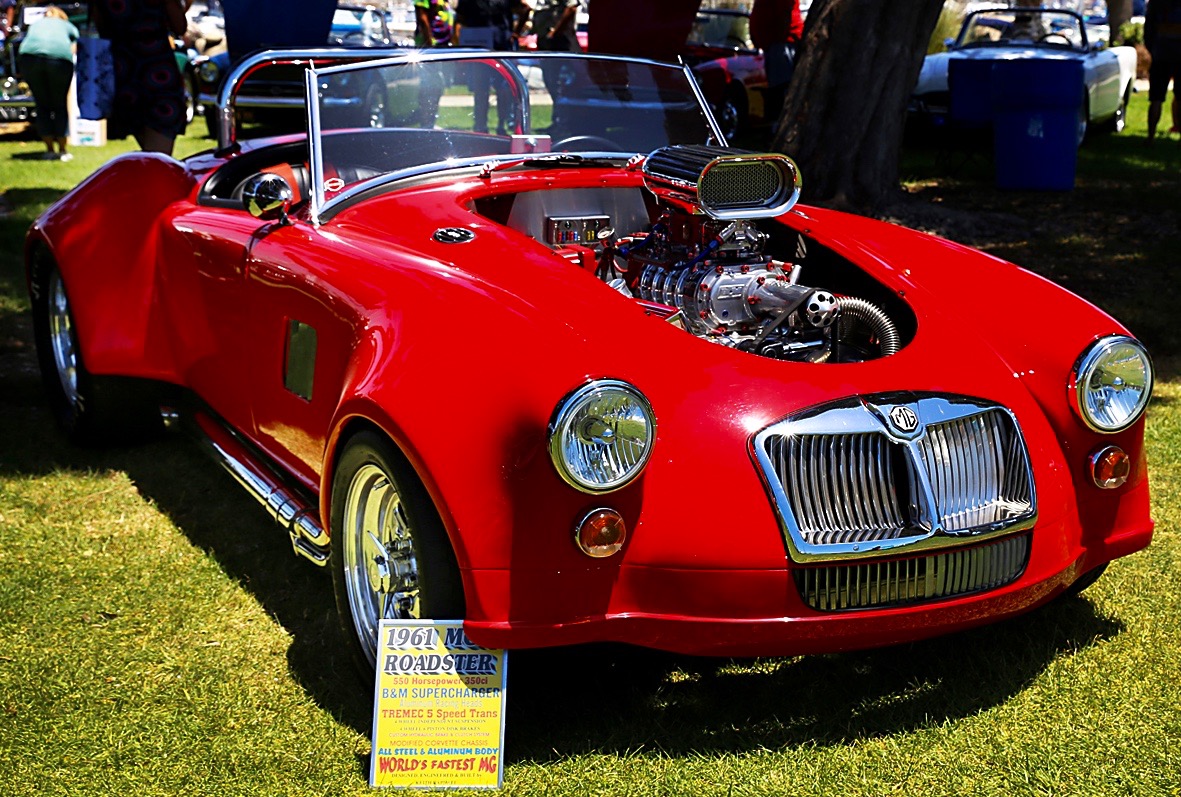 Keith Raphael’s mightily modified ’61 MGA Roadster is a rule breaker. First, let’s just rip out that 4-Banger and throw in a 550 horsepower supercharged V8 with a Doug Nash 5-Speed. Fat Hoosier racing tires won’t fit so let’s fab-on the Turbo Carrera steel fenders. Hmm, better roll all this on a Corvette independent suspension and stop her with four-wheel discs. Now Governor, let’s blow-off the bonnet and make some noise! 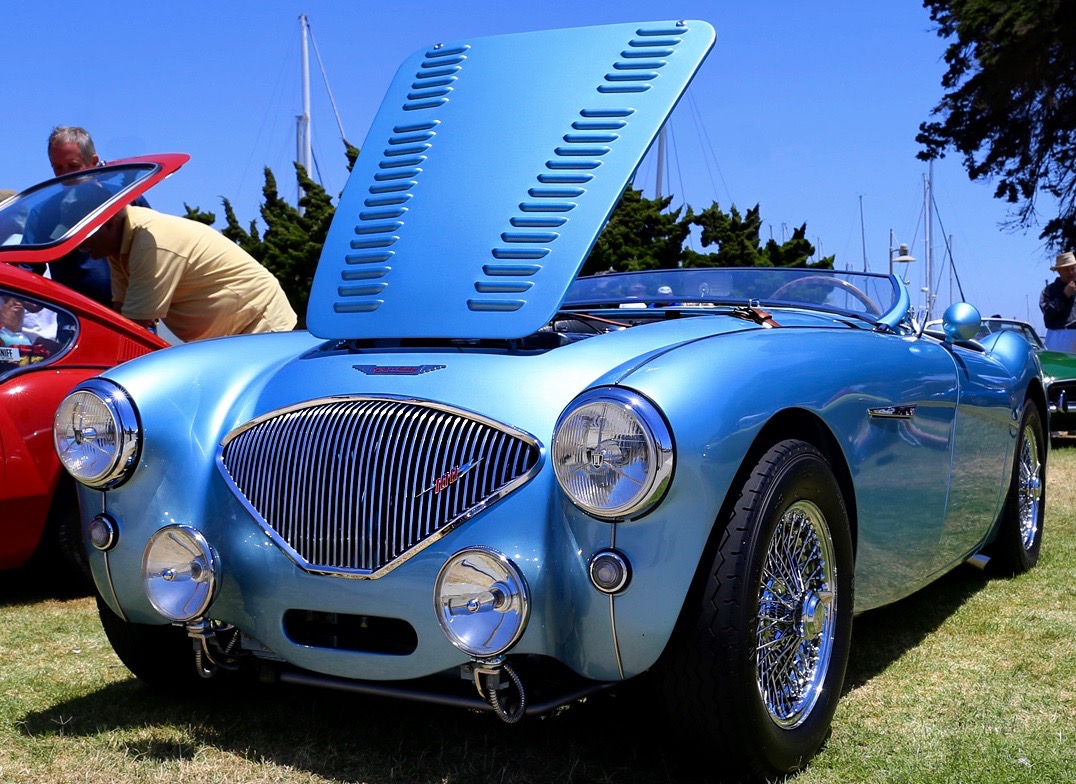 Bill Hoyt just couldn’t decide on what color to paint his modified ’56 Austin-Healey 100. Sure, there’s that traditional Healey blue but it’s just a tad reserved for Bill. After weeks of research and an invitation to rummage through the color chips at Aston Martin, he found his perfect color: Islay Blue. The judges at the show must have liked the color too – as Bill’s Healey went on to win the “Premier/Masters Class” trophy. 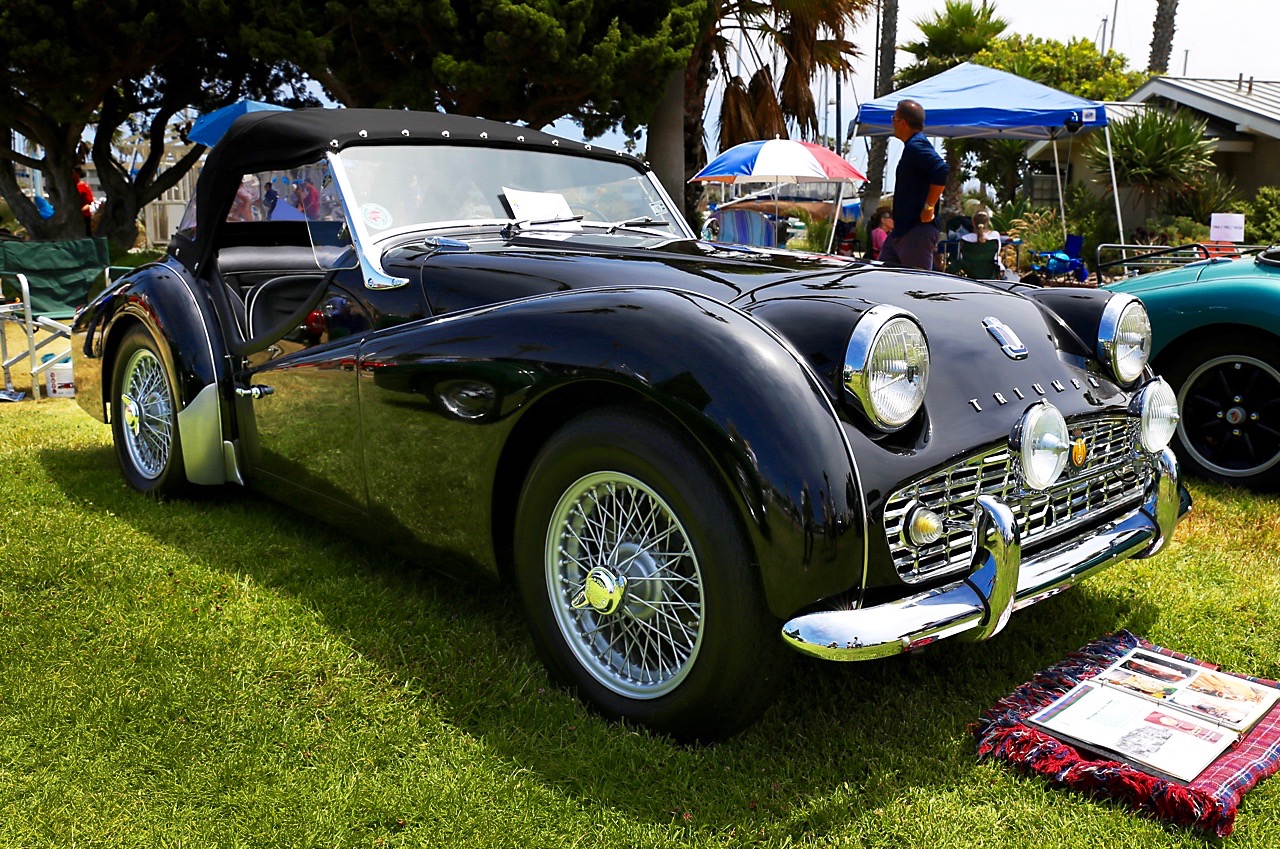 I wish I could remember the name of the gentleman who owns this beautifully restored ‘62 Triumph TR3. I would have shouted it at him as he and the roadster flew by me on Highway 101 North, after the show. This talented car guy restored the TR3 in his garage. He also painted the car himself – at Hancock College – after he took a basic auto-painting course. I’m giving him five Stars on his report card, because the paint and the restoration are expert-level. 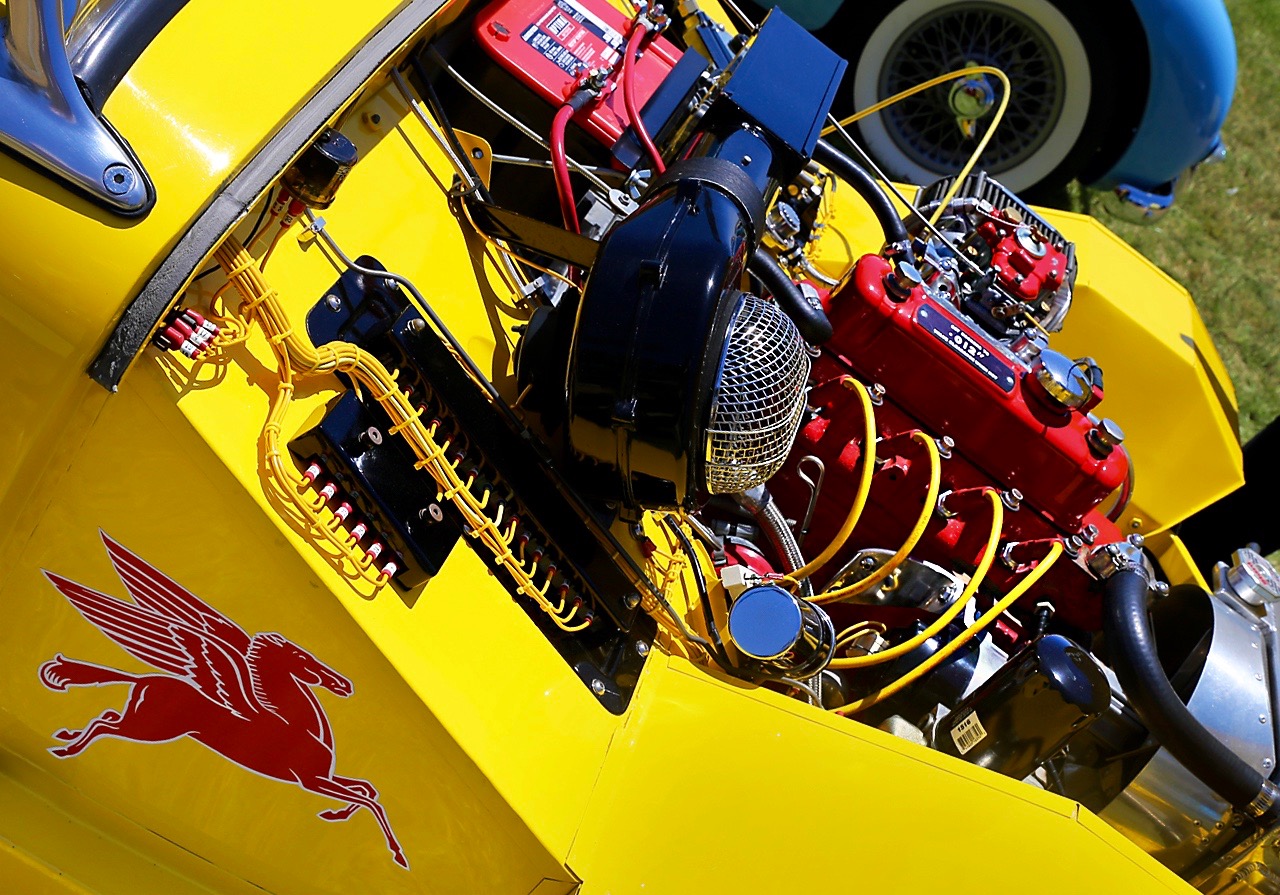 My very first car was a “Running-on-Three-Cylinders” Austin-Healey Bugeye Sprite. It didn’t matter that it was small, slug-slow and often damp. It was mine! Had I had some money back then I might have turned that Bug into something like this race-ready Yellow Bugster. Love the primary colors and neat wiring! 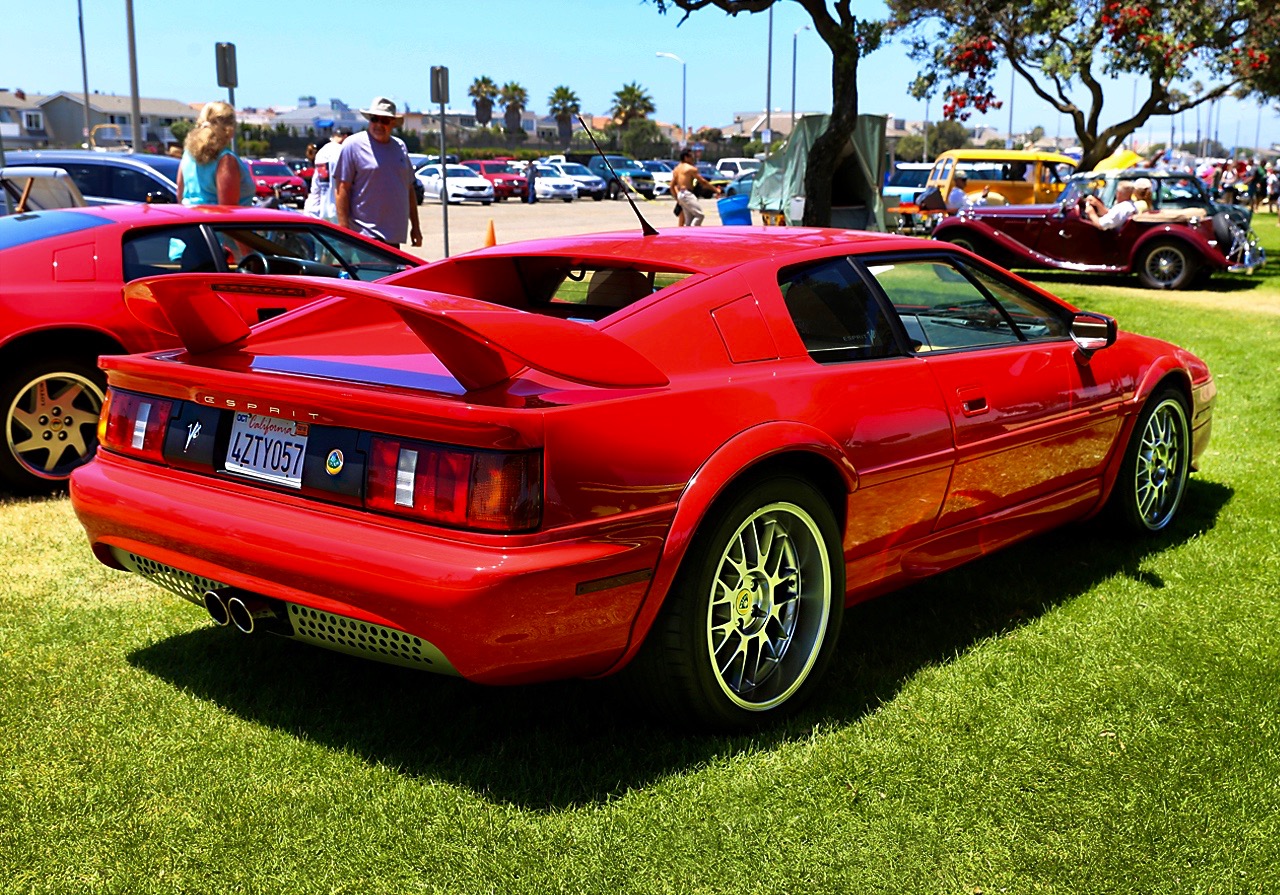 The Lotus Esprit was first introduced in 1976. Giorgetto Giugiaro, who was named Car Designer of the Century in 1999, designed the Model S1. Through 2004, 10,687 Esprits were produced. This sleek, red 2000 V8 sat poised in the park, ready for some Pacific Coast wind and road carving. 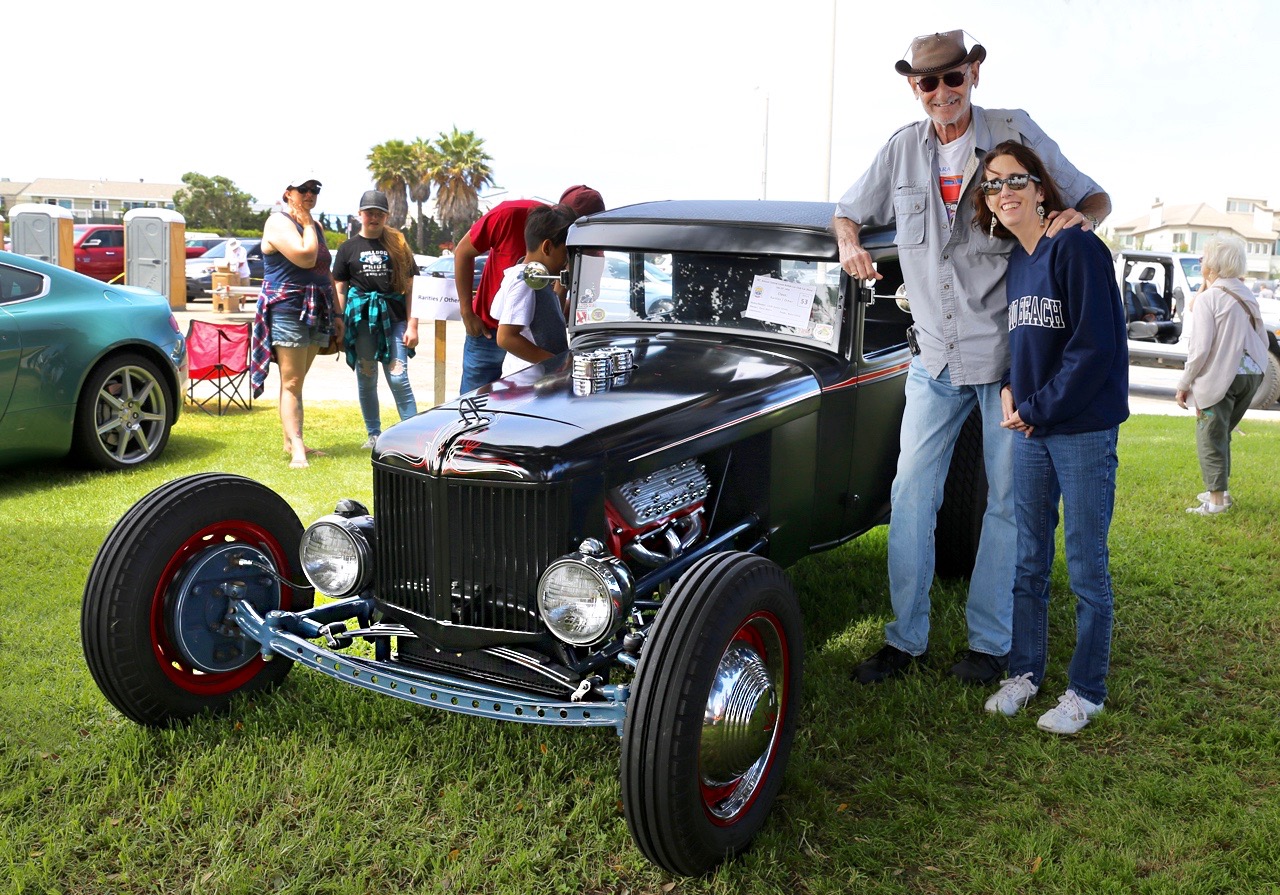 Something doesn’t fit. Either it’s 6’5” tall Dave Wolin into his re-imagined Dry Lakes racer, or this pinstriped coupe into this British Car Show. And then I saw the Austin hood ornament. Turns out his Ford Flathead powered Austin with the tractor grille started life as a ‘30 Bantam. OK, but Dave, can you really fit in? Wife Jane obviously doesn’t have that problem!