Skip to content
Bill Warner and his team delivered yet another whirlwind weekend of cars, cars and more cars in spite of a major challenge from Mother Nature. 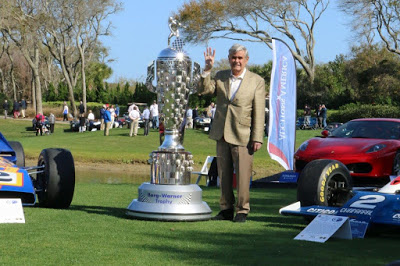 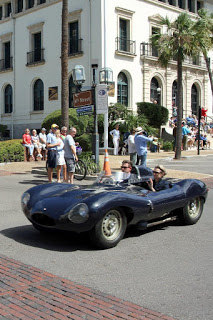 This year’s Concours amazed with sensory stimulation at every turn. Not to say that there weren’t challenges. Mother Nature forced a change from Sunday to Saturday, which they handled with aplomb and grace. They are to be congratulated for working untold hours to ensure the show went on.

2017 Honoree was Al Unser, standing next to the Borg Warner Trophy holding up four fingers, one for each time he won the Indianapolis 500. They paid tribute to his contribution to racing by exhibiting a number of his significant racecars from IROC, Indy, Pikes Peak and Daytona.

The Desmarais family owns this very original D-Type. Since sold in 1955 it has acquired a single repaint and about 9,000 miles. That didn’t stop them from participating in the Reliable Carriers Eight Flags Road Tour, right. Competition D-Types and their more street-oriented siblings, the XK-SS, were one of a number of featured groups at this year’s AICE. 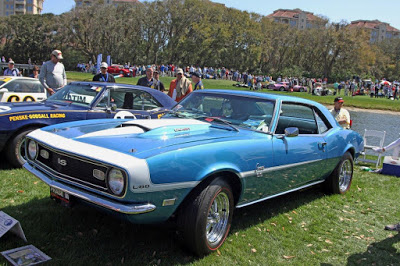 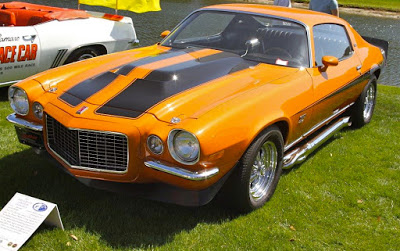 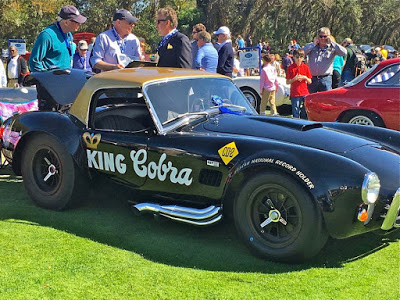 Do you feel a little older knowing the Camaro is marking a half-century since its introduction? And if Chevrolet couldn’t deliver enough power, a host of Tuners stood ready to answer the call. Joel Rosen’s Baldwin-Motion was well represented in the Camaro Anniversary display, showcasing a 427/600 Gen I Camaro powered by an aluminum-head L88 engine and owned by the Hassett family and a Gen II 454/500 Camaro owned by Dan McMichael. Irwin Kroiz took “Blue” honors with the iconic Motion built, raced, NHRA National record holding 427 King Cobra. Maximum muscle from Motion rules!

Highlights of Concours weekend are seminars with stellar guests. One dealt with the origins of Japanese racecars in the U.S. Under the direction of noted car guy, comedian and moderator Adam Carolla, panelists Peter Brock, Sam Posey, Chip Robinson, John Morton and Tommy Kendall regaled a full ballroom with tales of the early days. And if that weren’t enough, two noteworthy examples of significant Japanese racecars graced the space –  a 1.5 liter Honda F1 machine and the Prince R380 Japanese Grand Prix winner. A second panel titled “Legends of the Leaping Cat” with an equally impressive lineup of panelists entertained a Sunday morning crowd with Jaguar tales. 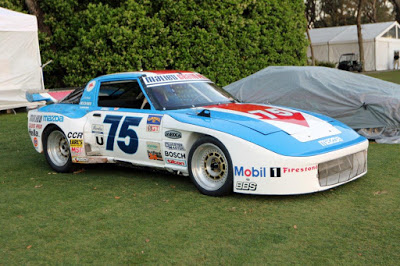 Continuing on our Japanese racing theme, we have Caroline & Tommy Kendall’s Mazda RX-7 IMSA GTU car. In a six-year period, this very car carried three different drivers to five separate season championships. Along the way, it notched 21 wins including Daytona and Sebring. 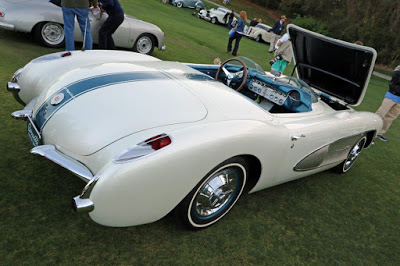 What looks like a customized straight axle Corvette, is in reality a ’56 GM show car displayed first in 1957. It abounds with touches that would never make it to production like the dashboard, windscreens and trim pieces in the taillights. After display in New York and Chicago, the ‘56/’57 Corvette worked its way to Albuquerque where it was involved in an accident and hidden away for years. Now restored, the first Corvette to receive a Fuel Injection 283-inch engine debuted at the AICE. 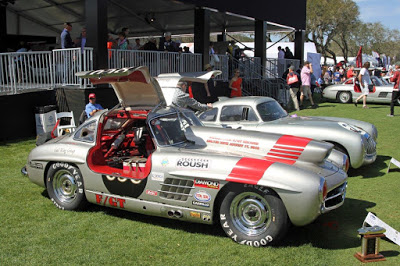 A Mercedes Gullwing is always an imposing sight, but leave it to AICE to add a twist – Gail & Bob Sirna’s 300 SL, a Bonneville record holder. Powered by a Roush-built M104 engine making approximately 430 horsepower, it holds the F/GT record at a touch over 190 mph. Behind him is Bruce McCaw’s W194, a Le Mans winning car that would go on to win at the Nürburgring before filling out its days as a practice/public relations car for the Carrera Panamericana. 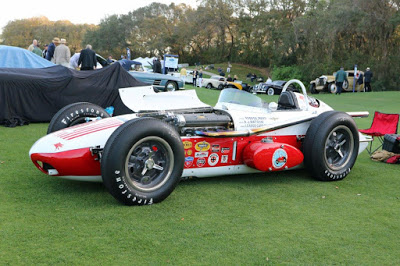 Indy roadsters were simple, robust, durable and above all, fast! Diane & Bill Mc Connell’s example would carry Roger Ward to a fourth-place finish in 1963. Built and wrenched by A. J. Watson its body was designed by Larry Shinoda for the Leader Card Team. Power came from 255-inch DOHC Offy Four running on alcohol. 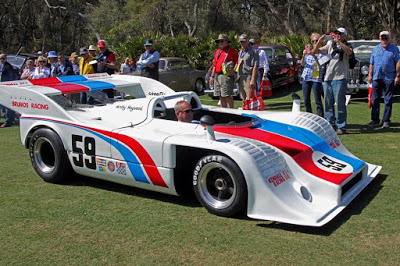 In the world of marketing and media relations, a well-recognized, distinctive livery is golden. That is certainly true when one considers the Brumos Racing color scheme. A long line of cars displaying the red, white and blue greeted Concours goers. Here they are shown on the 917/10 that Hurley Hayward drove to third in the 1973 Can-Am championship. Hayward himself was at AICE and is shown here motoring back to the show field after picking up an award. 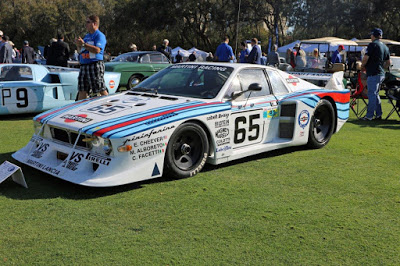 Resplendent in Martini racing colors and the early morning sun sits Suzanne & John Campion’s ‘80 Lancia Beta Monte Carlo. Prepared for the FIA’s “silhouette” formula of the early 1980s, there is precious little to link it to the road car whose name it bears, it’s all racer! Beneath the aerodynamically tweaked skin lies a boosted 1.45-liter DOHC four-cylinder engine making approximately 450 horsepower. All of this contributed to a class win at Le Mans for this car and two season championships for the Beta Monte Carlo in the under two-liter class. 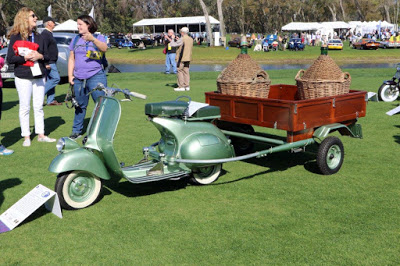 AICE celebrated the scooter as the featured Motorcycle Class. Generally overlooked, these often purely utilitarian devices served (and still do) as basic transportation. The Schigiel Collection’s example brought a smile to one’s face. Bearing the impressive full name Vespa Piaggio 125 Motofurgocino Con Stabil, it is an early example of the vehicle that provided mobility to countless in the difficult years following WWII in Italy. This one has been pressed into work duties hauling a trailer filled with two large wicker-encased wine jugs! 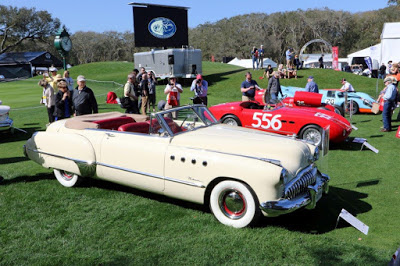 Here is part of an exhibit of Movie Cars. In the foreground is Barry Levinson’s ‘49 Buick Roadmaster from Rain Man, then Redline Restorations’ Ferrari 166 MM from The Racers and Bruce McCaw’s Porsche 917K from Steve McQueen’s Le Mans. In every case, the car conjured up sharp memories of the movie’s actors, dialogue and action. 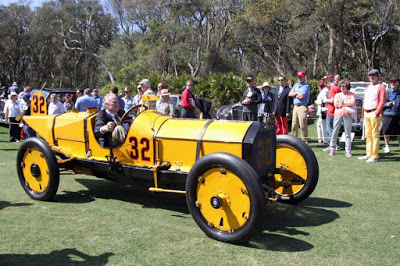 For a time, the name Marmon stood in the upper echelon of American automotive engineering. Their cars were light, powerful and fast and racing was a natural place to showcase the brand’s prowess. Perhaps the best example was this Wasp, driven to victory by Ray Harroun in 1911, the first Indianapolis 500. The Speedway Museum brought the car, adding to an impressive collection of Marmons on display. 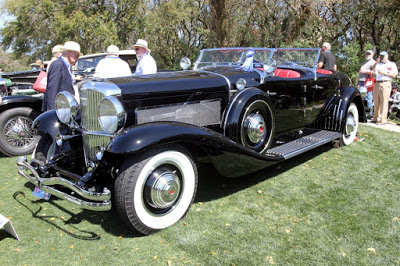 The Duesenberg Model J was intended to be a highly luxurious, powerful design appealing to the very pinnacle of American society. It turned out to be somewhat of a star-crossed design, introduced just before the onset of the Great Depression. Variants were built until the marque’s demise, but found an ever-shrinking marketplace. This one wears Gordon Buehrig designed bodywork constructed by A. J. Walker. Terry Adderley brought it to Amelia Island. His reward was a well-deserved Best in Show Concours d’Elegance Trophy. 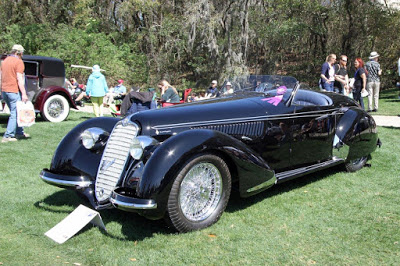 Winner of Amelia Island’s Best in Show Concours de Sport Trophy was the Dano Davis Collection’s ‘39 Alfa Romeo 8C 2900B Lungo Spider. It was raced in South America where it was fitted with a Chevy V8 and had its frame modified. It found its way to this country without its Touring bodywork or original engine. It represents here a long process that was justly rewarded. Car Guy Chronicles offers its “Well Done” on what had to be a herculean task.

The AICE supports several charities, for more information, including how to donate, please visit:
https://www.ameliaconcours.org/charity.aspx