Skip to content
Motorsports news from around the world.

Tom Kristensen with Danish crown prince at golf tournament.
Le Mans record winner Tom Kristensen was delighted about receiving an invitation to the European Tour with royal participation. The former professional racing driver competed in the Pro-Am class in the golf event ‘made in Denmark’ with two celebrity competitors – the Danish Crown Prince Frederik and the most successful Danish golfer Thomas Bjørn. Jacob Brunsborg, the son of Himmerland Golf Resort owner Lars Larsen, completed the team. Around 6,000 spectators attended the competition in Farsø in northern Denmark. 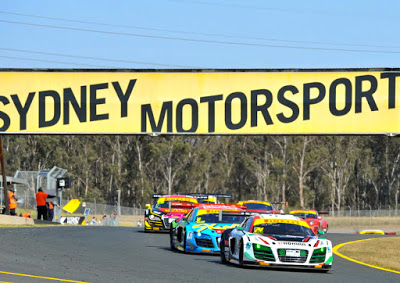 Victory and podiums finishes in Sydney.

At the fourth round of the Australian GT Championship, Christopher Mies and Ryan Millier produced the best performance in an Audi R8 LMS ultra. At the Sydney Motorsport Park, the duo fielded by Audi customer team Jamec PEM Racing headed an Audi one-two finish. Second was Audi driver Nathan Antunes (Skwirk/Beechwood), who was third in race two ahead of Mies/Millier. There was also an Audi victory in the Trophy classification to celebrate: in race two, Mark Griffith won from his stablemates Greg Taylor/Barton Mawer. In the first race, Taylor/Mawer made the podium in third place.

No less than six of Audi’s former Le Mans winners passed on their motorsport knowledge during expert training for sales assistants. Frank Biela, Dindo Capello, Tom Kristensen, Allan McNish, Emanuele Pirro and Marco Werner supported the Audi Training seminars in Munich on 30 training days. Sales assistants are trained here for their job as Audi Sport experts in the retail trade. “It was fun showing just what is possible with the R8 V10, the new TT cup and the R8 LMS,” said Allan McNish on behalf of his colleagues. “With us, the employees discovered that Audi Sport ignites a burning passion and sporty models like the R8 V10 have their roots in motorsport.”

Audi driver André Lotterer attended the press preview for the new Audi TT Roadster and TTS in Tokyo on Thursday. Audi Japan launched the two models on its domestic market and invited the guests to an event in the ‘Studio Earth’ on Tokyo Tower, an architectural landmark in Shiba Park in the Japanese capital. 110 media representatives from Japan and around 50 other guests visited the presentation of the models, which are very popular within the Japanese sportscar market. André Lotterer, currently FIA WEC championship leader with Audi, talked about his expectations for the 6 Hours of Fuji, which is set to be held on 11 October.

The racing drivers representing Audi customer teams visited the Audi of America headquarters in Herndon on the way to their next events. Racing drivers Christopher Haase and Dion von Moltke, currently second in the GTD classification standings of the Tudor United SportsCar Championship, travelled with Paul Miller Racing to Virginia. In addition to their Audi R8 LMS machines, there was also an R8 LMS from team C360R at the headquarters. The Audi of America employees could also admire exhibits from Audi’s motorsport history, including the Audi R8 and Audi R10 TDI LMP racecars. Moderator John Hindhaugh hosted proceedings in the presence of IMSA President Scott Atherton, President of Audi of America Scott Keogh, as well as key personnel responsible for the motorsport program Tristan Herbert, Andy Sattler and Brad Kettler.

A word from Marcel Fässler.

The Swiss travels as championship leader to the Nürburgring with his team mates.The summer break in the FIA World Endurance Championship WEC is over. Now, five races are on the agenda in twelve weekends. What are looking forward to the most?

It’s great that Le Mans sportscars are at the Nürburgring again for the first time in many years. Audi’s home race will definitely be a classic. By the way, it is also my home race, because no other track is closer to my home in Switzerland. I’m also really looking forward to the following race in Austin. And in Asia, the title battle then enters its crucial stage in Asia – they will be five fantastic races.

Your currently lead the standings together with your team mates André Lotterer and Benoît Tréluyer. There must surely be only one goal. How difficult will the title fight be this year, who are the strongest challengers?

We are highly motivated. The season so far shows how challenging the job is. Porsche is our strongest rival, has two excellent driver line-ups and continuously develops its technology. Our own team mates Lucas di Grassi, Loïc Duval and Oliver Jarvis should not be taken lightly. I also don’t want to write off Toyota.

A different classification for the racecar is valid from the Nürburgring, which appears to favor Audi slightly. Is this a help or are the remaining races about other qualities?

I’m pleased that the Audi R18 e-tron quattro is slightly better categorized again. However, we’ll only see the real performance level at the Nürburgring. For us it’s a question of approaching every race totally focused, to make no mistakes and to score as many points as possible. These are the strengths that will count.

Your team mates and you were World Champions in 2012 in the FIA WEC, in 2013 and 2014 championship runner-up, and now you are leading the standings again. You’ve won Le Mans three times. What has distinguished the Fässler/Lotterer/Tréluyer trio for so many years?

We form a close knit and harmonious team together with Audi Sport Team Joest, Audi Sport and our engineer Leena Gade. Every one of us knows how the other ticks and how we can exploit our respective strengths, even of the circumstances seem to be against us. Benoît, André and I have been driving together since 2010. Our success together strengthens the entire team.

Coming up next week.