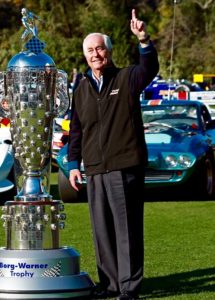 It’s Saturday afternoon at the Amelia Island Concours d’Elegance (AICE) and cars begin moving onto the show field, including a unique array of cars associated with Roger Penske. They come from his years as a driver, a team owner and constructor. Leading a line of impressive racers is Shamrock Motors’ 67 Lola T70 in the Sunoco Blue so often associated with the early years of Team Penske. That year it would serve as George Follmer’s car and take him to a sixth place in the final series championship. 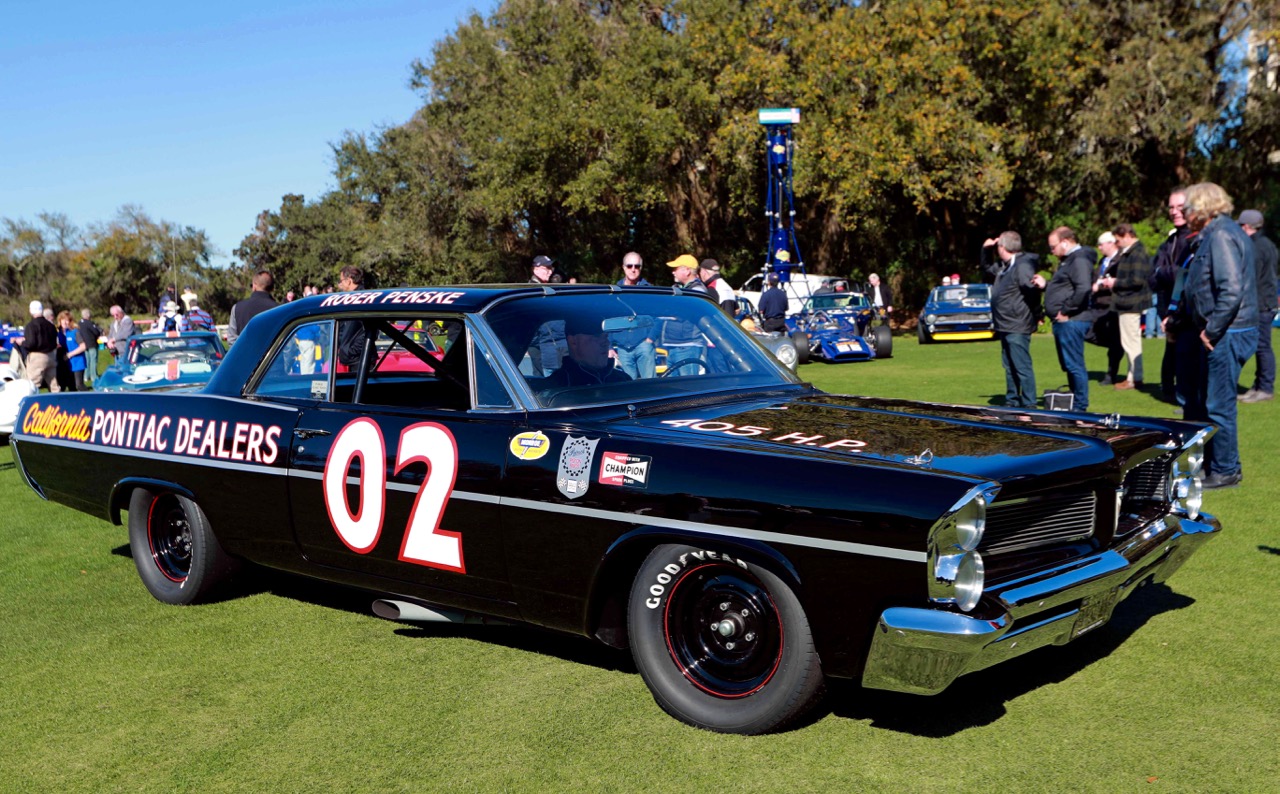 race finishing half a second in front of NASCAR regular Darel Dieringer. Then he boarded a plane to return in time for work Monday morning. This car is a replica of the race winner from the Team Penske Museum. 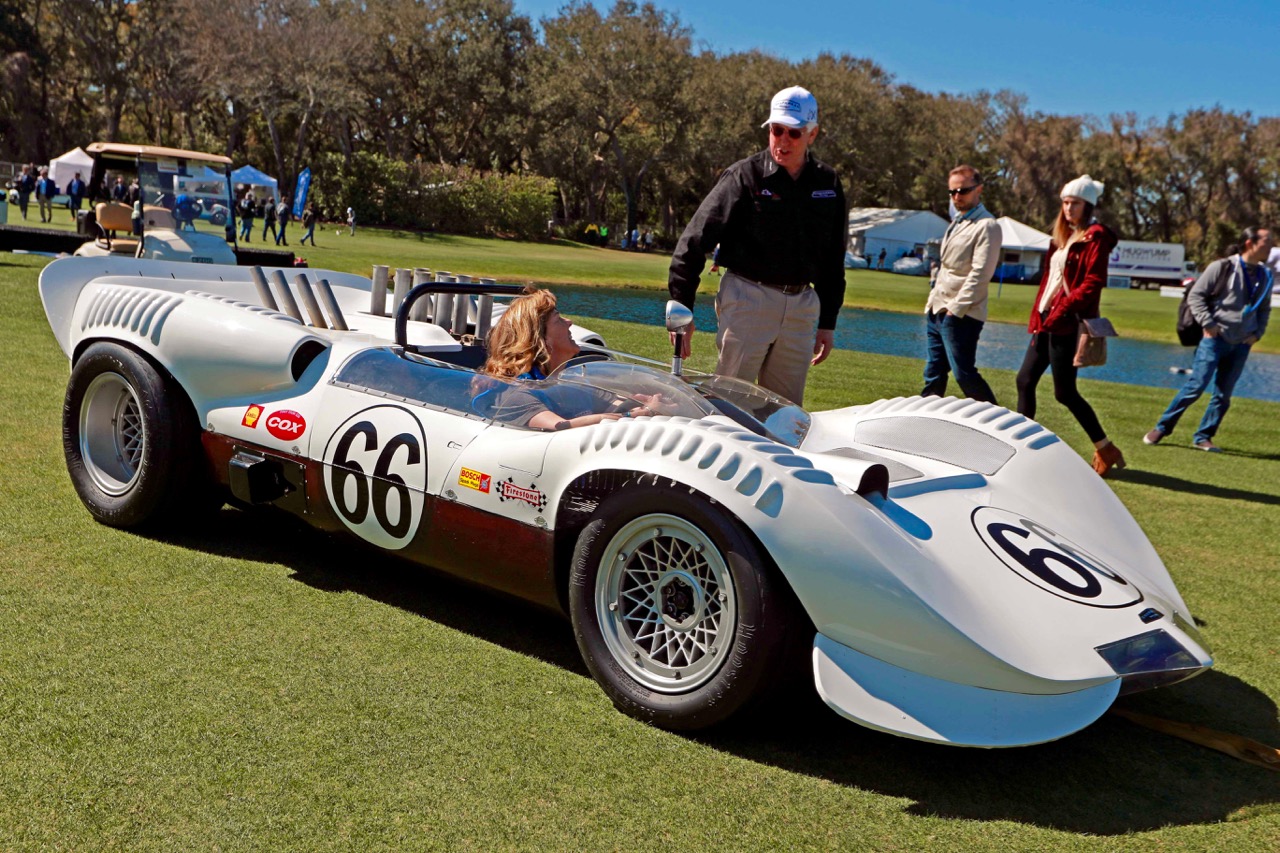 Jim Hall’s Chaparrals introduced numerous concepts to racing. The Chaparral 2 had an innovation plastic, semi-monocoque chassis and an automatic transmission. Roger Penske would appear ten times in Hall’s Chaparrals, including victories at Laguna Seca and a pair of wins at Nassau. The Jim Hall-Petroleum Museum provided this example at this year’s, AMELIA ISLAND: ROGER PENSKE CARS. 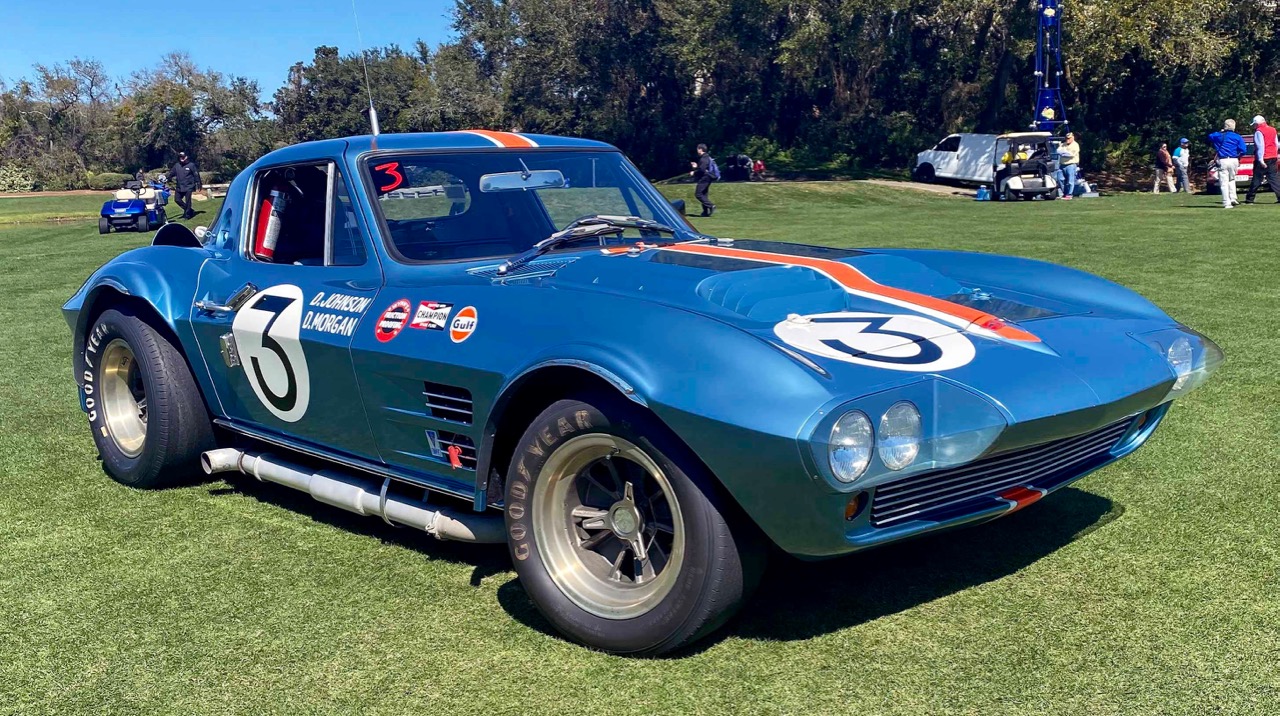 The Corvette Grand Sport was Zora Duntov’s attempt to build a lightweight Corvette to take on Shelby & Ford’s Cobra. Famously, the project ran afoul of GM senior management after (arguably) six prototypes were built. Five Grand Sports have been accounted for and documented. Those cars ended up in select privateer’s hands including John Mecum who put Roger Penske behind the wheel of one. Penske would prove more than capable, netting class and overall wins. It resides in the Miles Collier Collection at the REVS Institute, Naples, FL. 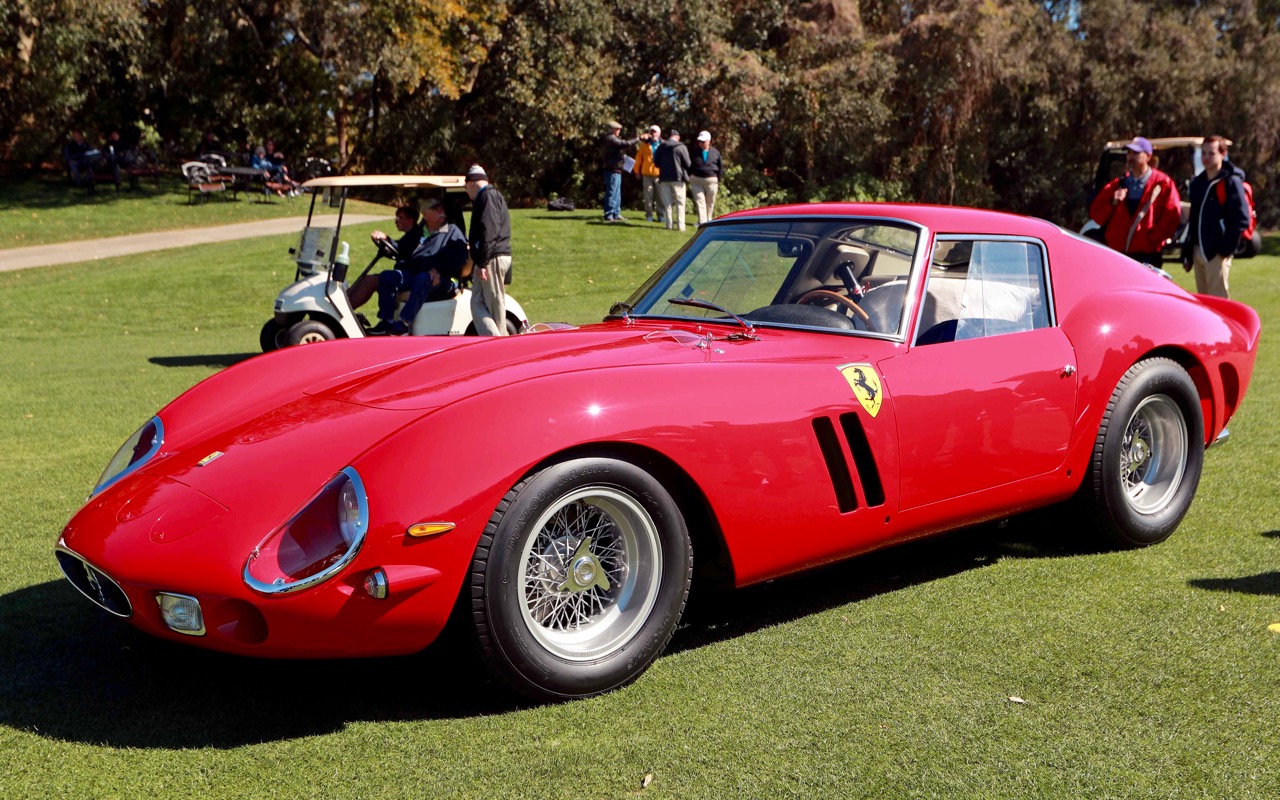 John Mecum also figures into the history of this Ferrari 250 GTO after he acquired the ex-NART racer from Luigi Chinetti. Roger Penske would drive it to wins in Nassau and Pensacola, as well as a second place in the 1963 Daytona Continental. Today Ralph Lauren owns it. 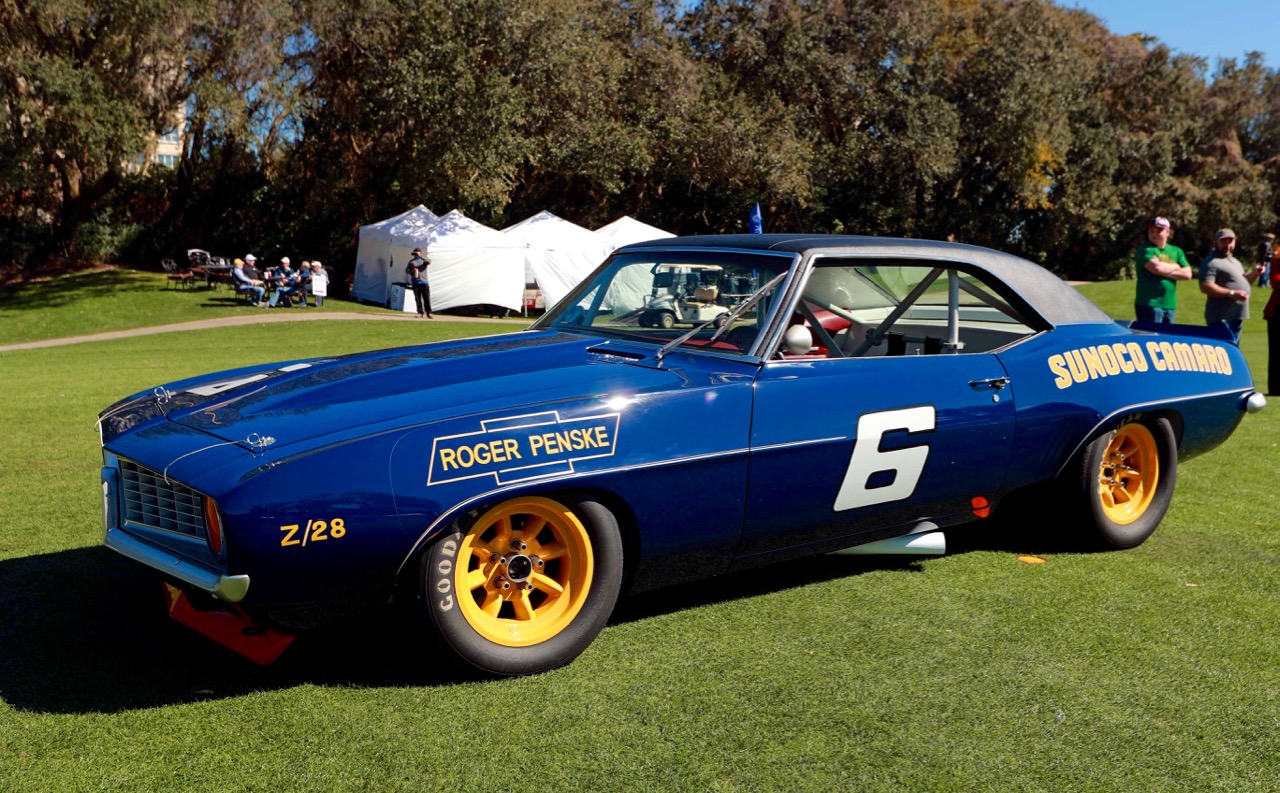 Penske Racing achieved considerable success in the SCCA Trans- Am series, first with Camaros, later in Javelins. After their series debut in 1967, they would claim their first championship in 1968. The next year, a pair of ‘69 Camaros led their title defense. Combining the driving of Mark Donahue, Ed Leslie and Ronnie Bucknum with immaculate preparation and significant innovations, Team Penske won 8 of 12 races and their second Trans-Am championship. Our thanks to Kim & Bill Ockerlund for bringing this legendary Camaro to Amelia Island. 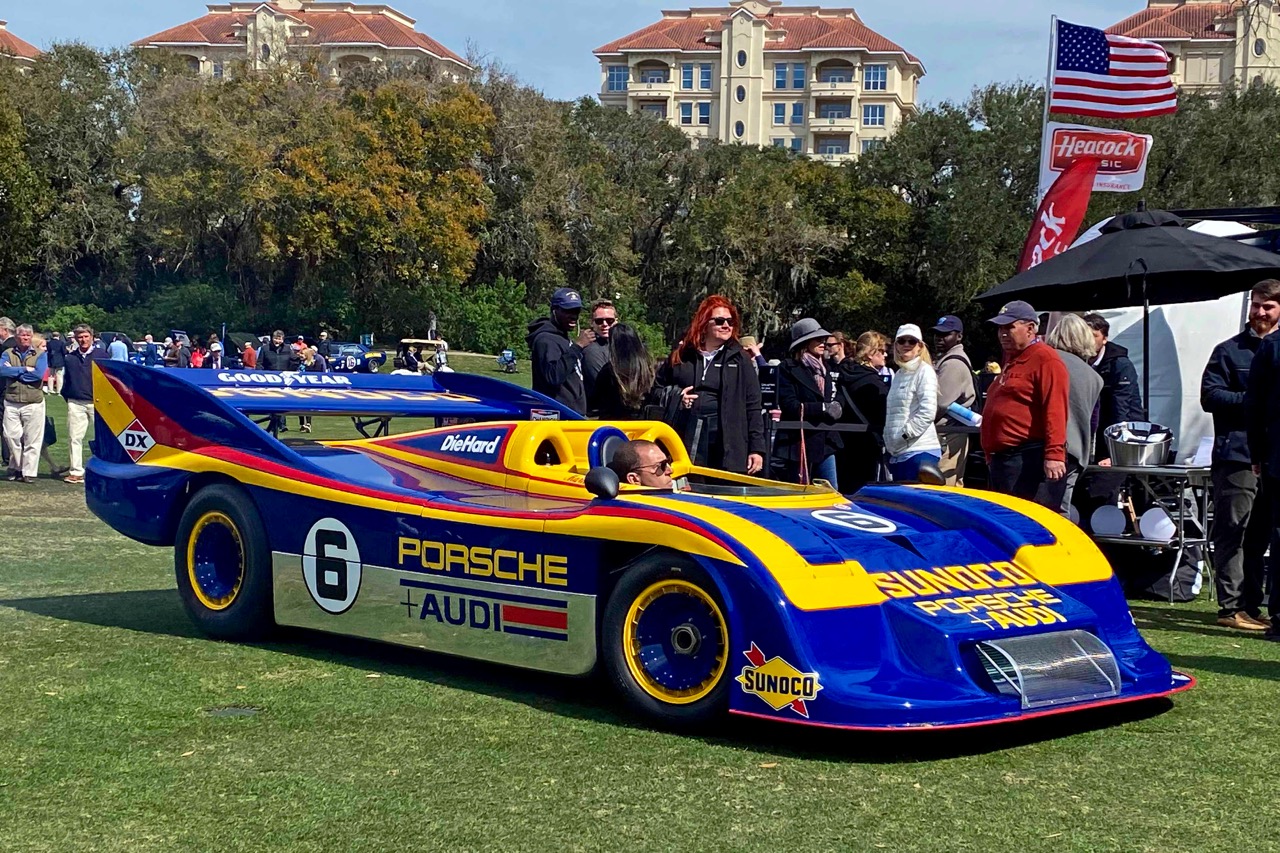 The McLaren juggernaut swept through the Can-Am series until Team Penske and Porsche came together to build a turbocharged version of Porsche’s 917. The result dominated the series for two years before being rendered uncompetitive by the rules makers. After a series victory in 1972, they returned the next year with the 917/30. Mark Donahue would win six of eight races that year. Rob Kauffman brought the 1973 Cam-Am Porsche to the AICE and left with The Ritz-Carlton, Best in Show, Concours de Sport for his effort. 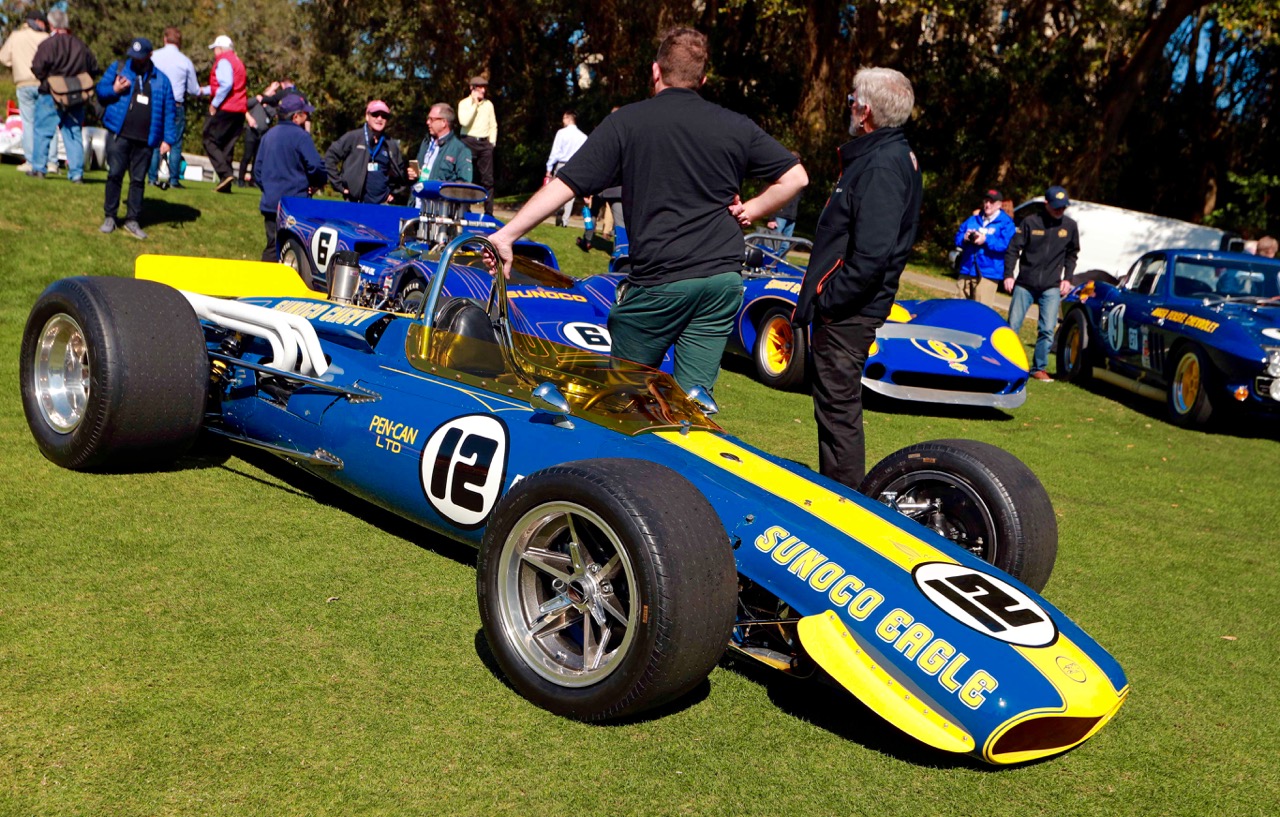 It all started here. The Alegra Collection’s ‘68 Eagle-Chevrolet was Team Penske’s first Indy racecar. It would appear for them three times, taking a fifth in Mosport, suffering a DNF at Riverside and being withdrawn at Indy. It was hardly an auspicious start. But it did prove that they could run with the more established teams in Indy Car racing and laid the groundwork for countless victories to come. 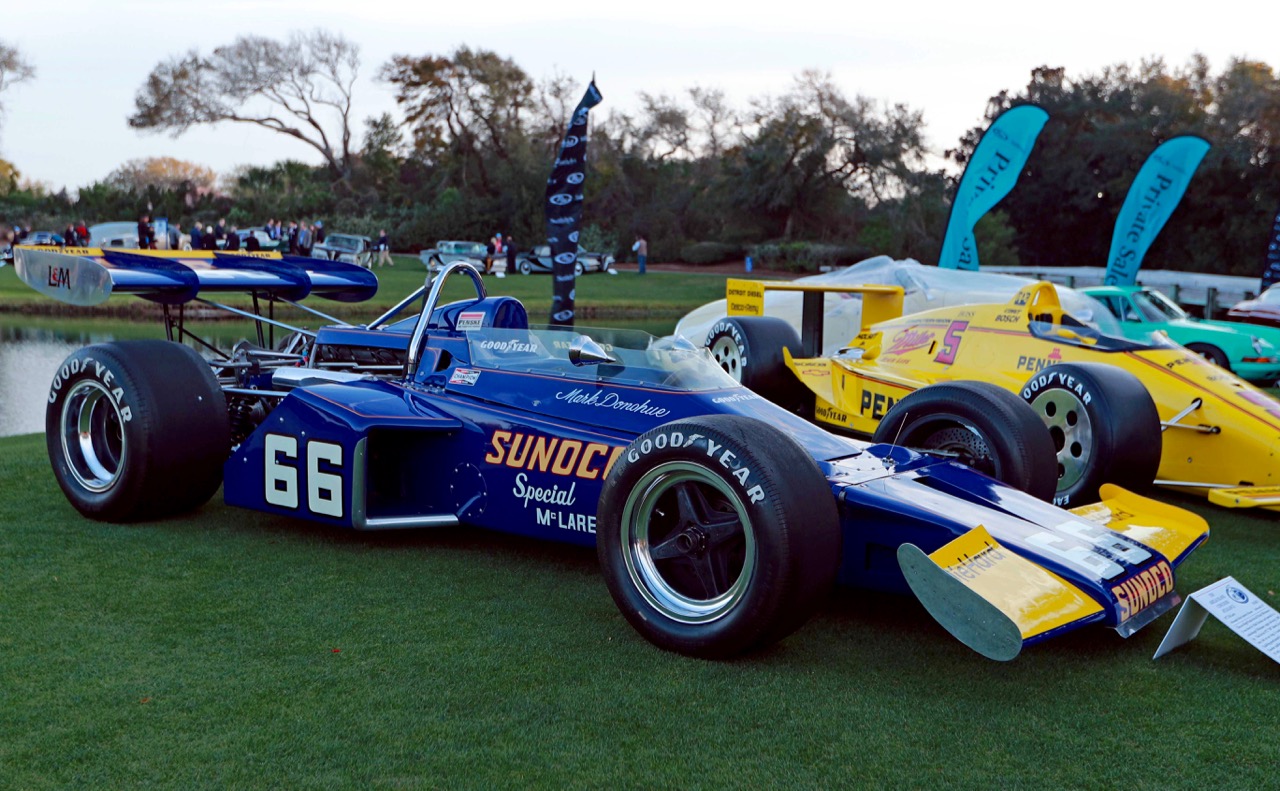 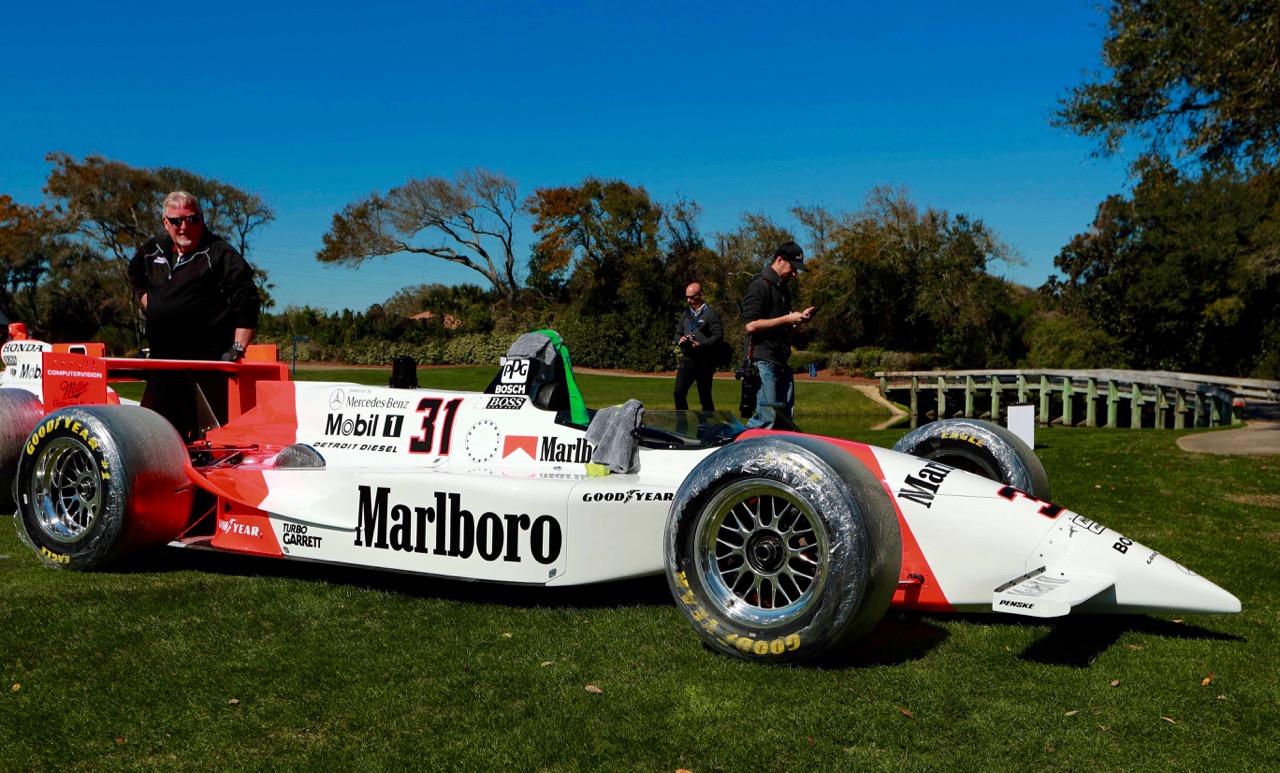 Of all the Penske stories told, and there are a lot of them, a favorite has to be about “The Beast”. In 1994 Penske saw a loophole in the regulations allowing higher boost levels for pushrod engines. Quickly and secretly, Team Penske, Mercedes and Ilmor designed a full-race engine to meet these rules, the only competitor to do so. Al Unser, Jr. would score Penske’s tenth Indy 500 win in this car, still owned by Team Penske. 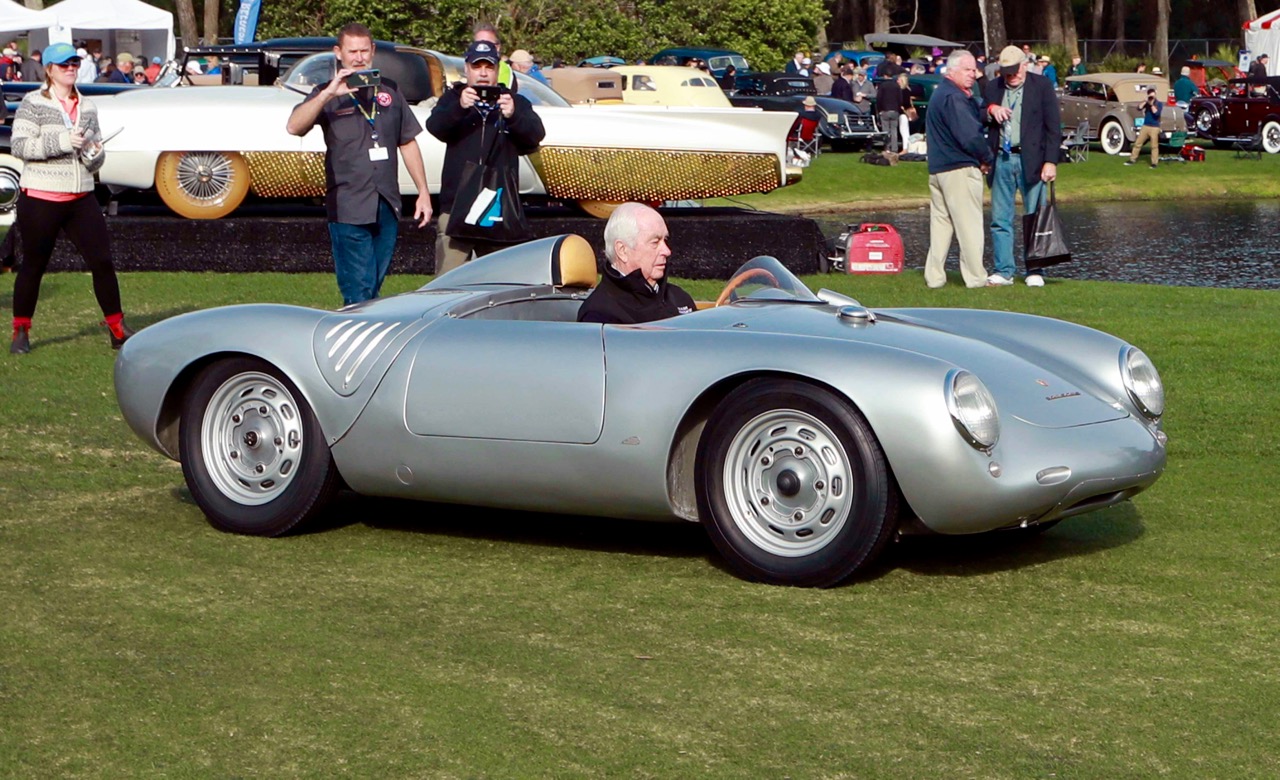 Roger Penske drives a Porsche 550A onto the show field through appreciative spectators and their cameras. 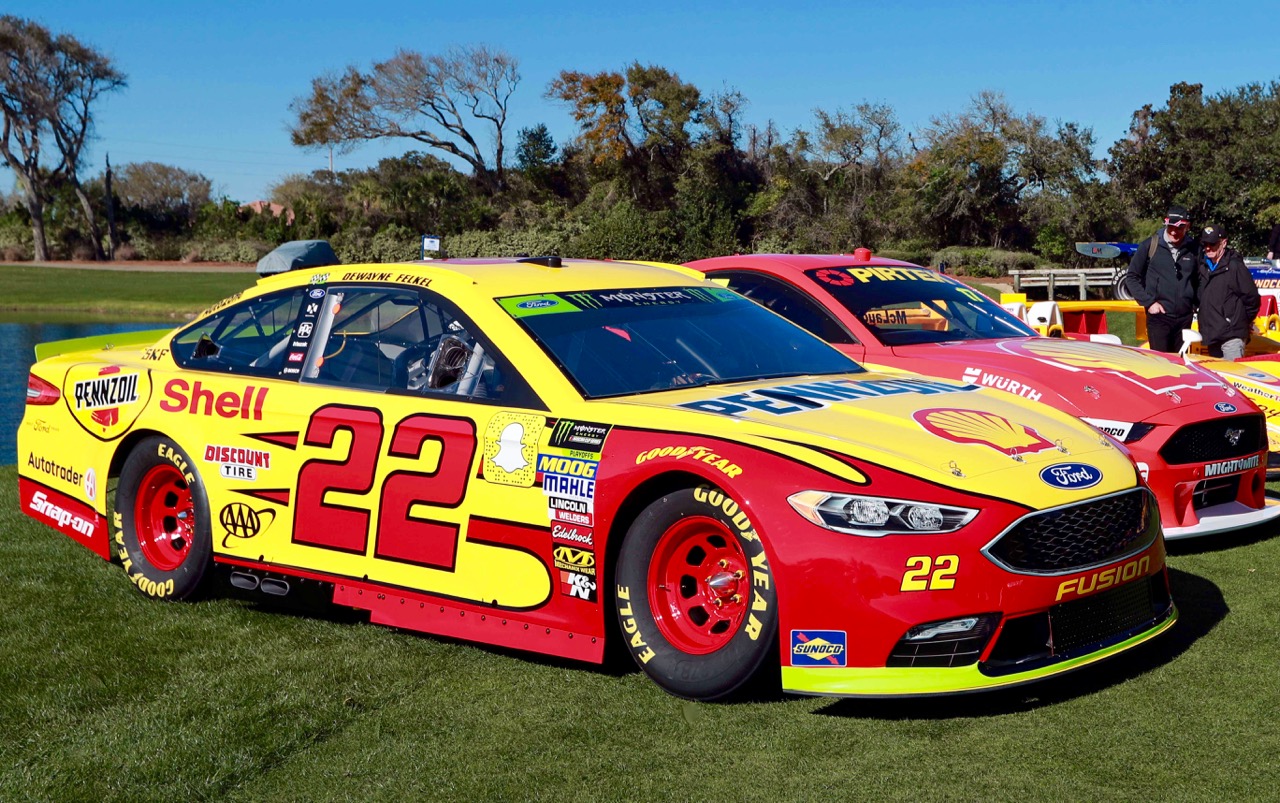 Roger Penske mentioned during two of the seminars held in his honor, his pride at having gone to the Pentagon a half century ago to receive the SCCA President’s Cup trophy from General Curtis LeMay and more recently having been invited to the White House on three occasions, the most recent as the winner of the Presidential Medal of Freedom. One of his White House trips was in recognition of Team Penske winning the 2018 NASCAR Cup Championship with driver Joey Logano. Team Penske still owns this ‘18 Ford Fusion that scored five victories on the way to that championship.