Skip to content
Mike Matune blogs about the day that a maximum muscle car invaded the hallowed ground of serious GT sports cars. It was truly Mayflower Madness! 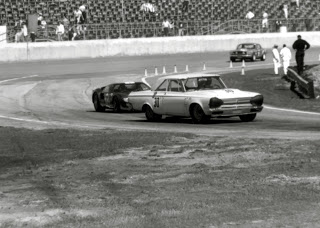 When one talks about the World Championship of Makes in the 1960s, the discussion naturally turns to the Cobra – Ferrari Wars or Ford & Ferrari’s battle for Le Mans supremacy. While epic battles both, they tend, by their sheer notoriety, to overshadow other racing efforts of the same time. What about the others, those that seem to have been ill-timed; those driven more by enthusiasm than racing common sense; those that suffered the self-inflected wounds of their corporate bosses and on and on? Here coming into Daytona’s infield road course from the oval is the Plymouth ahead of the Bondurant/Ginther GT40 (3rd OA/2nd P) and the Scott/Hayes Mustang Prototype (DNF). 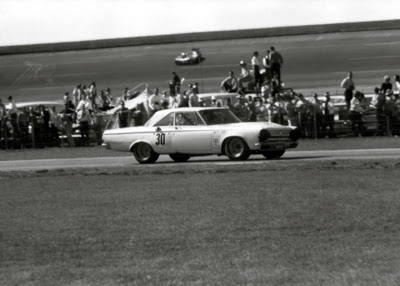 In this lesser known category is Chrysler’s effort to invade the GT FIA endurance ranks with a Plymouth Hemi Belvedere. For one brief moment as Carroll Shelby lined up Enzo Ferrari in his cross hairs, Chrysler trained its sights on them both. The Plymouth, above, moves past a crowd of spectators on the infield section of the course. The hows and whys of this story is the subject of an article in the November/December issue of Vintage Motorsport. 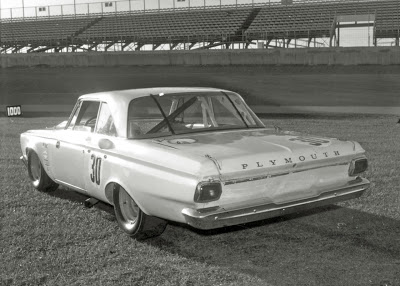 The story begins with NASCAR’s ban on the Hemi for stock car competition during the 1965 season. Chrysler withdrew from the circuit and looked for alternatives, finding FIA endurance racing.  It all came together for the 1965 Daytona Continental where a great white whale competed in a field of svelte sporty car types. Additional modifications viewable from the rear of the car include
the brake cooling scoops on the rear quarters, fuel filler in the top of
the deck lid, straps on the rear window and above the driver side
taillight, the fuel overflow fitting. 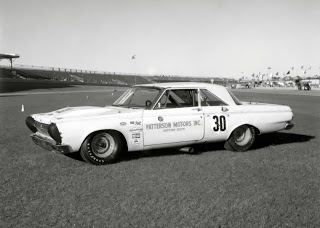 In the end, it all came to naught, never to be seen again. But while it was operational, this GT class Hemi Belvedere was something to behold. Along the way the story involves some famous and not so famous within the Chrysler racing world. In this pre-race publicity shot, right, you can see the car was equipped with
stock door handles, locks and vent windows. Added for racing were
number lights and an open exhaust; in addition to added lighting with
protective covers, a hood bubble and brake cooling ducts in the front
bumper and rear quarters.

For more, Vintage Motorsport is available on newsstands, at http://www.vintagemotorsport.com/ or can be downloaded at iTunes.