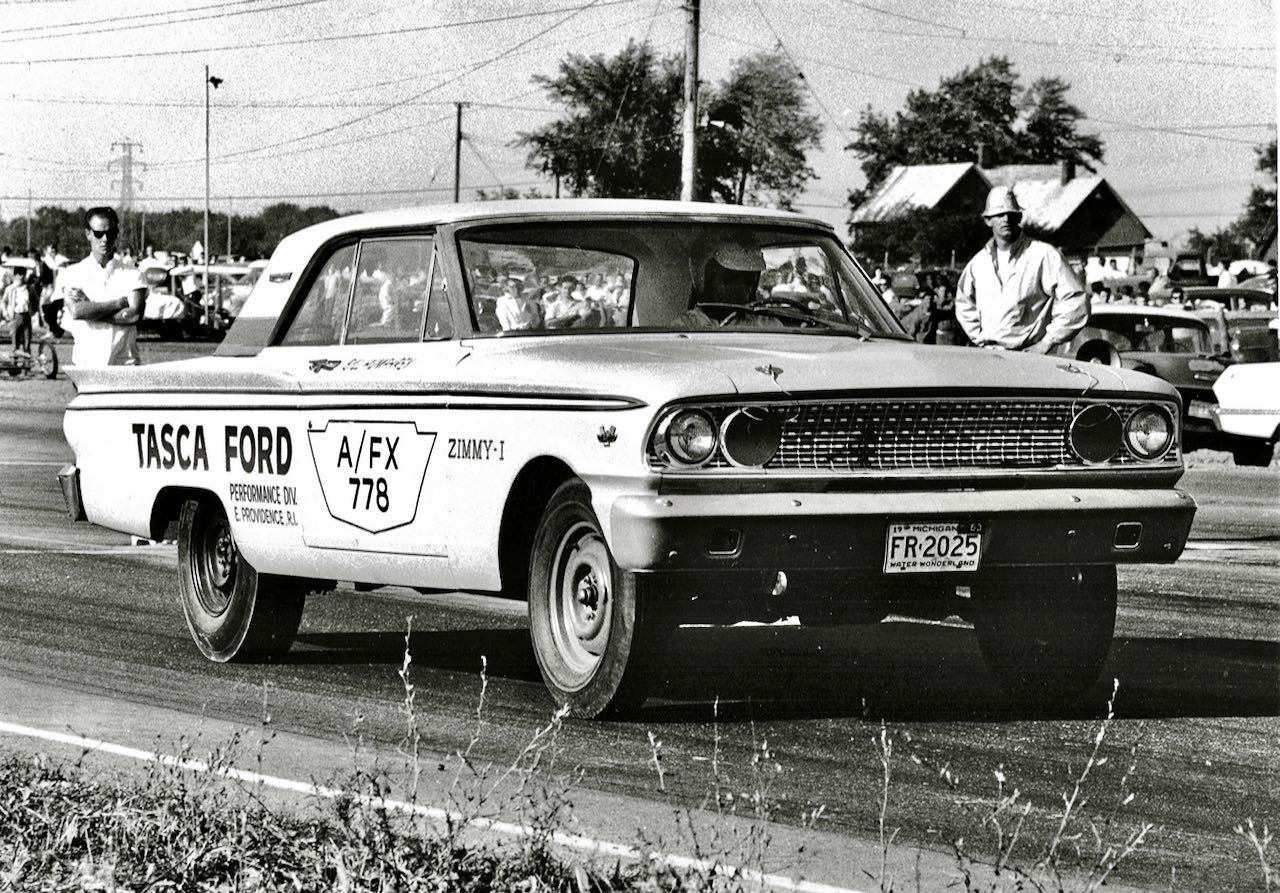 Most Ford fans were really confused when Tasca Ford’s Bill Lawton first staged the Ming Green A/FX ’63 Fairlane coupe at the 1963 NHRA Nationals. They were used to seeing ’63 Fairlanes running in D/Stock, like Li’L Lord Fotus, the Fairlane Milo Coleman drove for the class win at 99.88 mph/ 13.75 seconds. What was a stock-looking Fairlane doing in A/FX? After Lawton made a 12.21-second/118.42 mph pass during Time Trials, it was obvious that ZIMMY-1 was not just a just a modified stocker. Driven by Bill Lawton, ZIMMY-1 fell prey to Don Kimball’s ’63 Z11 Chevy during Eliminations, below. Before shipping the car back to Ford, Lawton did manage to set the NHRA A/FX National Record at 121.29 mph at the Division One Points Meet at Connecticut Dragway, 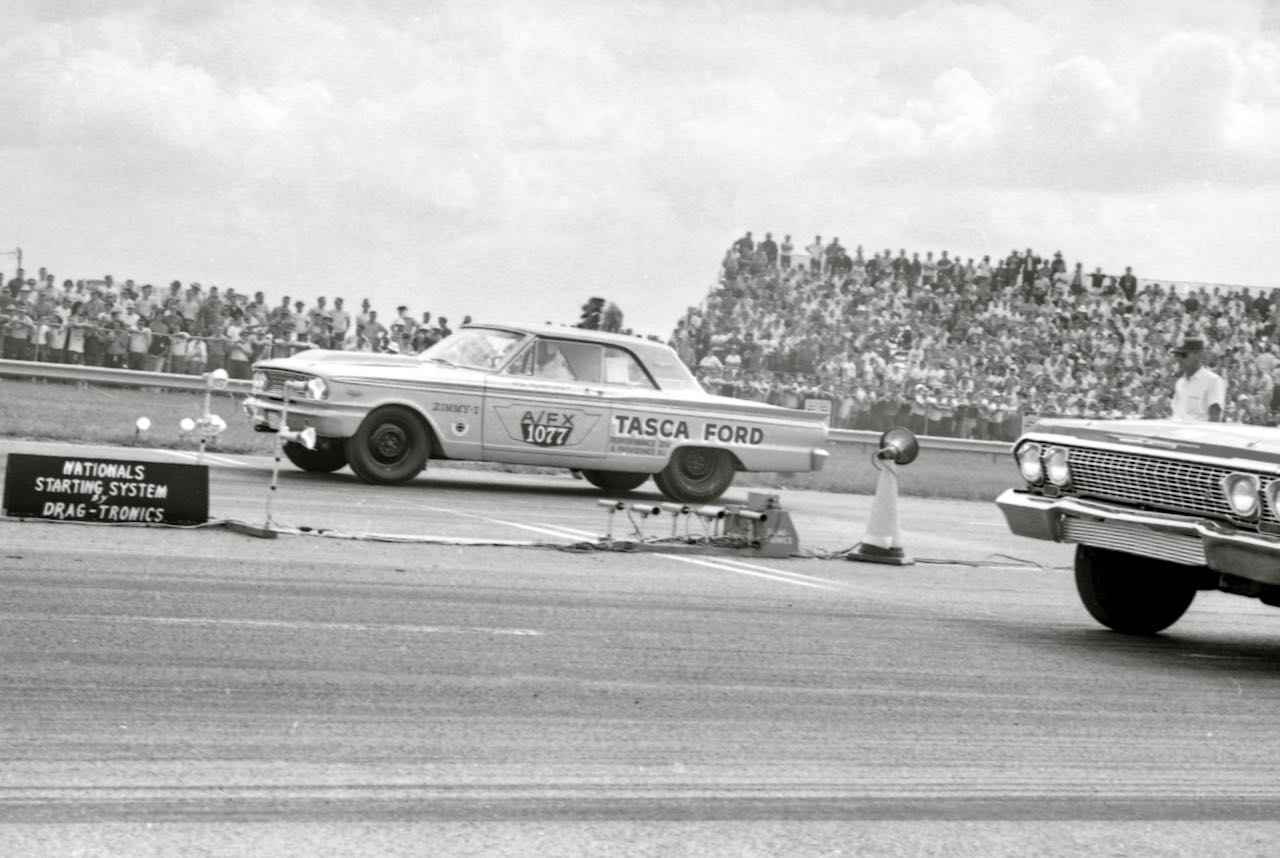 ZIMMY-1 was powered by a blueprinted 427 big-block, which, at the time, was only available in ’63½ Galaxies. 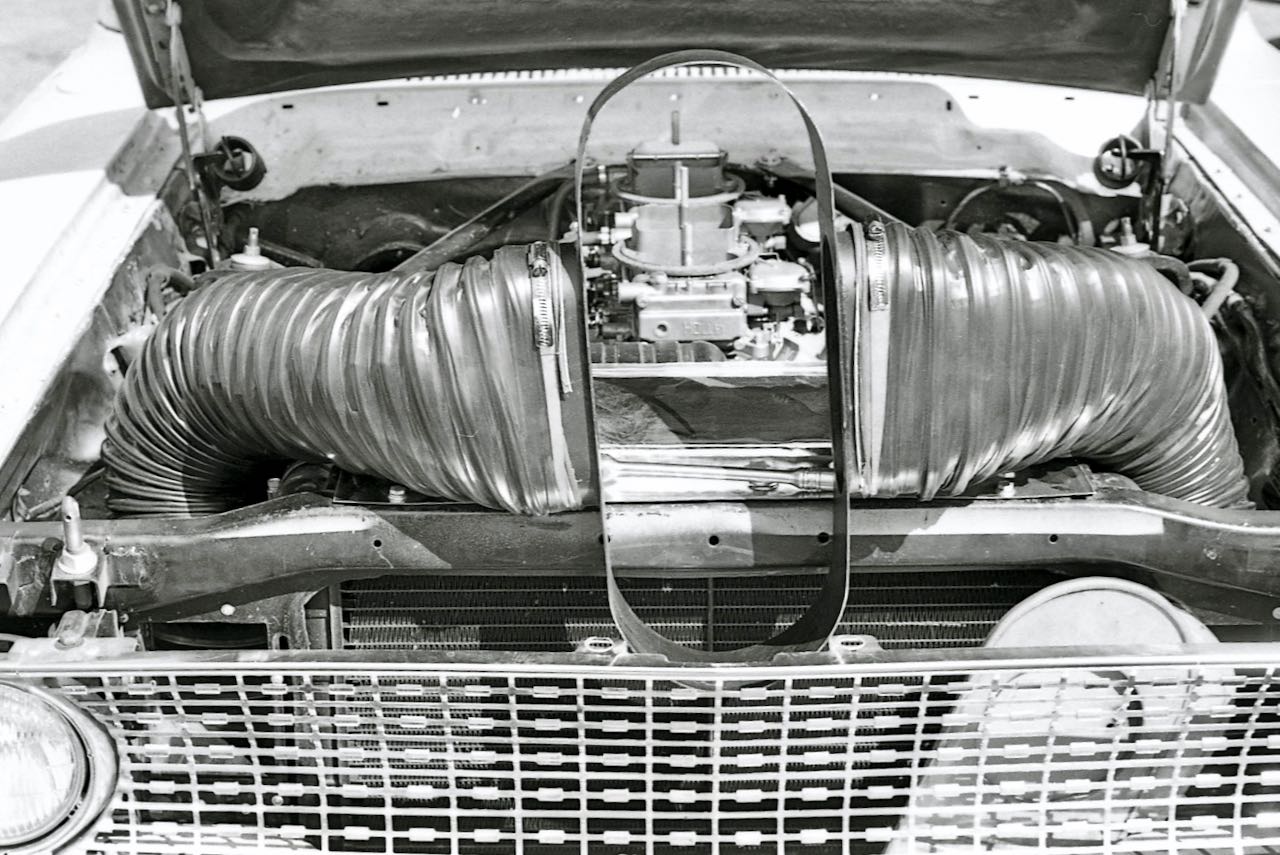 While covering the NHRA Indy Nationals for CUSTOM RODDER and later at Tasca Ford in East Providence, RI, I spent a lot of time with ZIMMY-1 and driver, Bill Lawton. Over its short lifetime it was powered by three different big-blocks – 406 and two 427s – and fitted with a variety of fiberglass hoods. While at DST, ZIMMY-1 was built with fiberglass front fenders, hood and deck lid and aluminum inner fender panels and bumpers. Ready to race weight was 3,320 pounds. 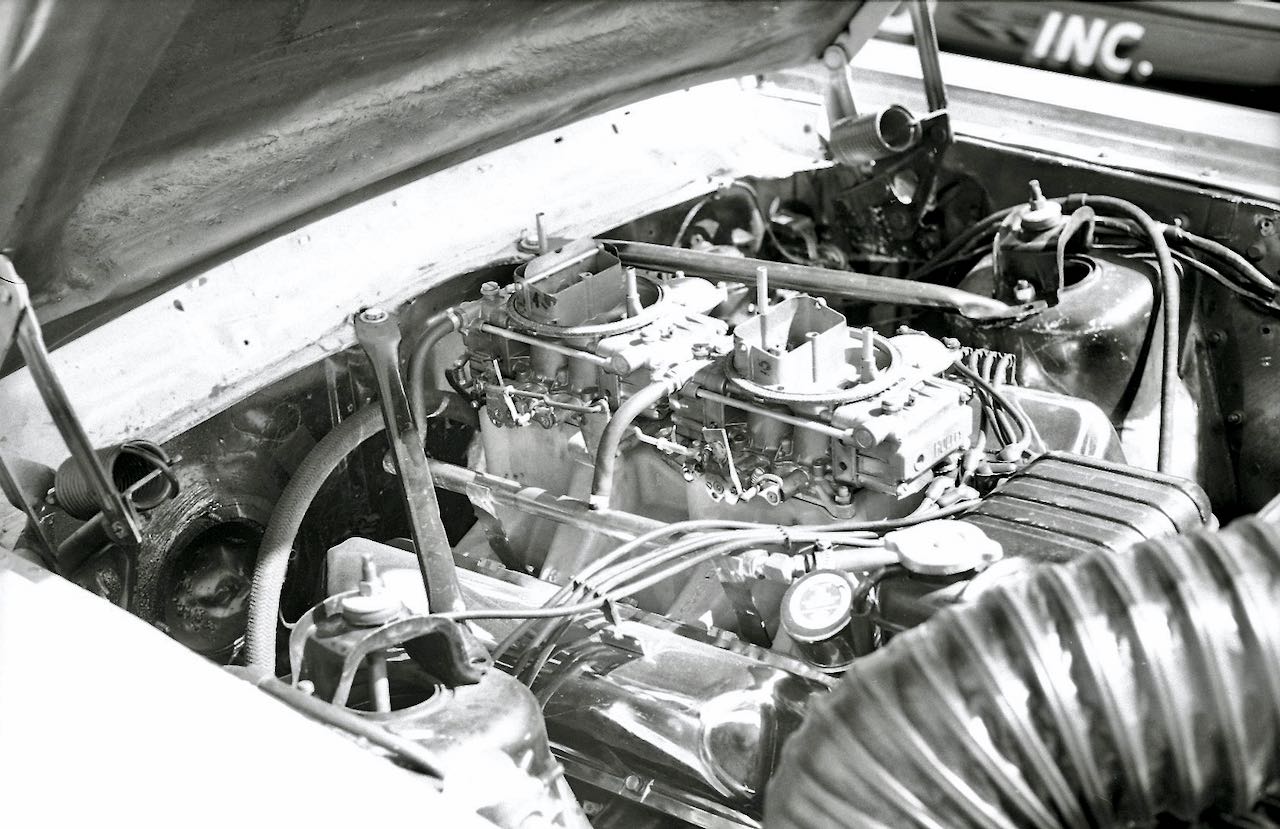 After being sorted out, it was raced at the Nationals with a 427 High-Riser with Ram-Air induction built by Ford Engineering. They used the latest 427 NASCAR short block which utilized a steel crank, 12.7-to-1 forged pistons and machined and polished heads with 2.197-inch intake and 1.735-inch exhaust valves. A bustle with special baffles was added to the base of the engine’s stock oil pan to increase capacity to ten quarts. They topped off the engine with Holley dual-quads. 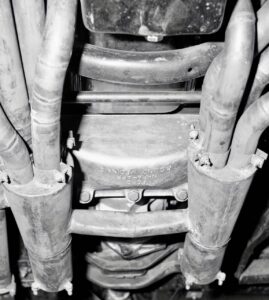 Ford engineers crafted tubular steel headers for the 427. Each tube measured 31 inches long and snaked around steering and suspension obstacles, dumping into 14-inch collectors fitted with an equalizer tube. Chassis-to-engine mounts were fabricated from 1/8-inch steel stock and topped with stock 427 rubber pads. As with 427 Galaxie Lightweights, the Fairlane’s engine was bolted to a Hurst-shifted Ford four-speed (2.36 First gear). To aid clutch cooling during repeated runs, the scattershield’s mounting bolts were shimmed for ¼-inch spacing. An HD 427 Galaxie driveshaft, shortened to 54 inches, hooks the powertrain up to a big Ford rear with 31-spline axles and a Detroit Locker with 4.44 gears.

When transplanting a 500-horsepower engine into an under-3, 300-pound car engineered for 271 horsepower, much attention has to be paid to the chassis and suspension. To effectively and safely transfer weight at launch, the chassis was “loaded” using a special (left) front coil spring and shock assembly and two-leaf (right) rear spring. The stock right front spring and shock and left rear three-leaf spring and shock were retained. 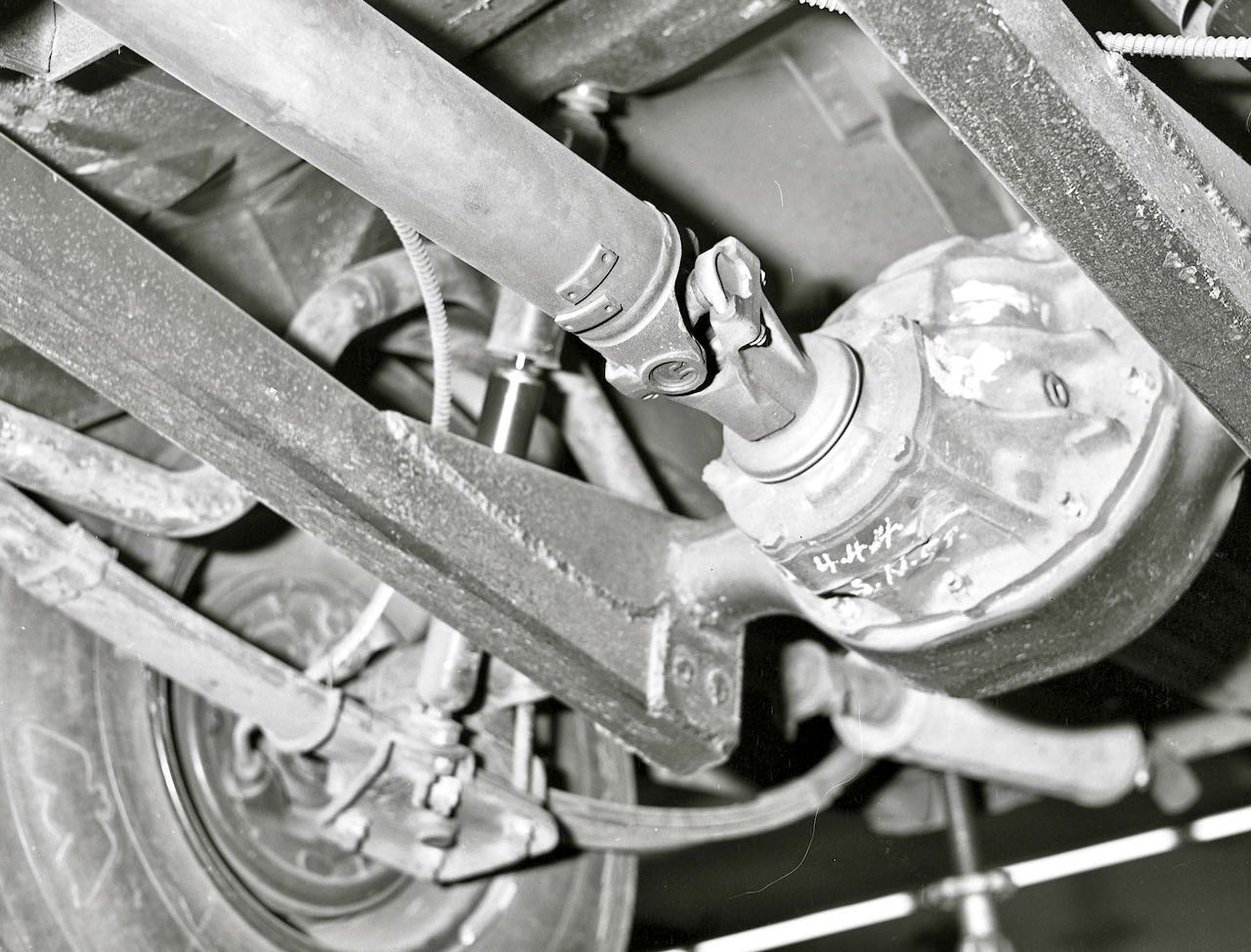 Increasing horsepower is relatively easy compared with getting power to the pavement. Completing the chassis “loading” was the fabrication of a pair of boxed steel traction bars, similar in design to the ones used on 427 Galaxie Lightweights and later on Thunderbolts. The traction bars measure 31 inches long and run from the axle housing forward to chassis mounting points which added structural rigidity and aided in weight transfer. A trunk-mounted 95-pound battery sits over the right rear wheel. 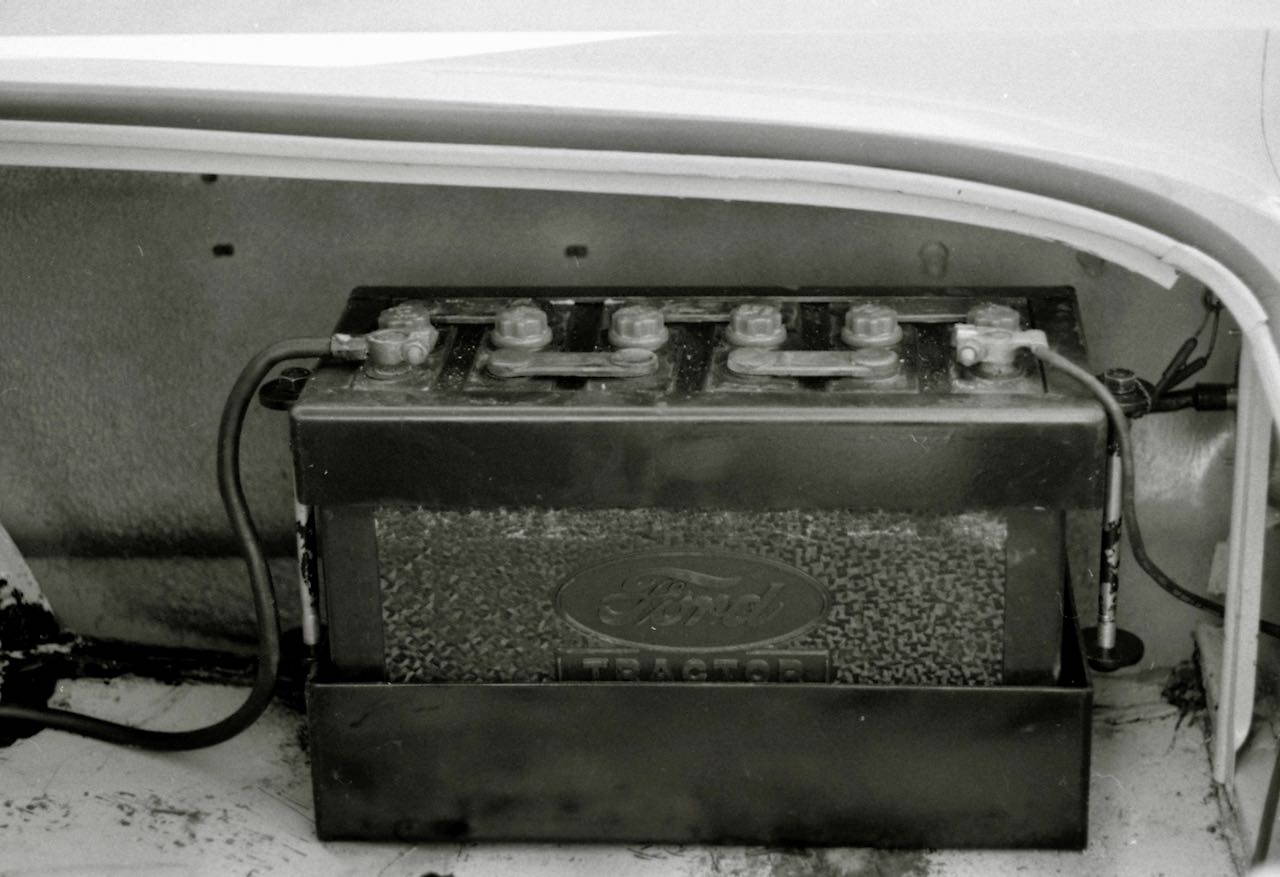 ZIMMY-1, the 427 FAIRLANE (THUNDERBOLT) PROTOTYPE was a work-in-progress while at Tasca Ford. Many small changes initiated by Bob Tasca, John Healey and Bill Lawton were incorporated into the final engineering of the ’64 Thunderbolt. They experimented with a variety of fresh air induction packages, the best being a sealed-air box with eight-inch diameter hoses ducting through grille inlets.

In 1964 ZIMMY-1 provided the blueprint for the creation of the limited-production Super/Stock 427 Thunderbolt. Totally illegal for the street (even though sold by Ford to a “straw” buyer and registered in Michigan), the 427 FAIRLANE (THUNDERBOLT) PROTOTYPE most likely went directly to the crusher after being returned to Dearborn. Its legacy lives on in surviving Thunderbolts.