You could publish a lavish book about the cars displayed this year at Pebble Beach. Since we don’t have the space, here are some of the highlights from Mike & Maureen Matune, our shooters ‘on the green.’ 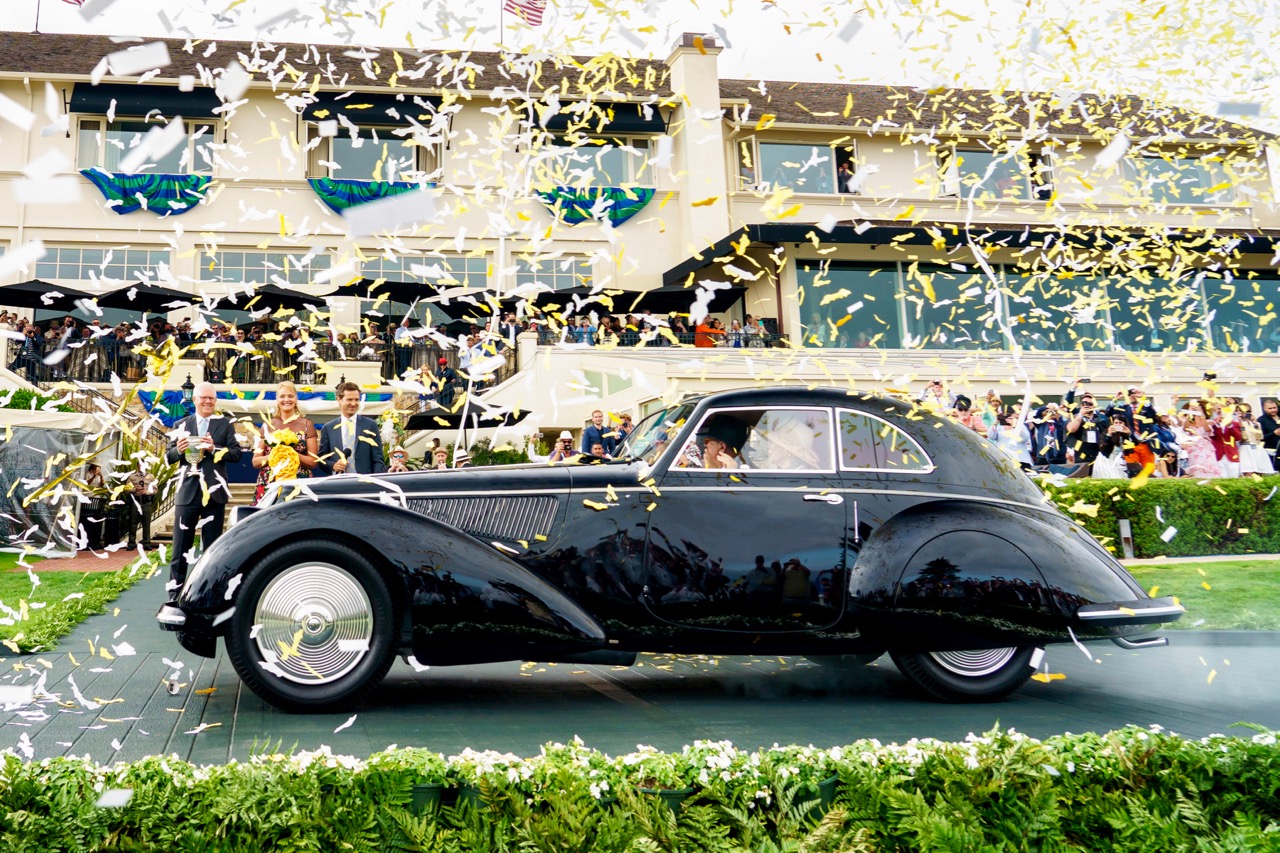 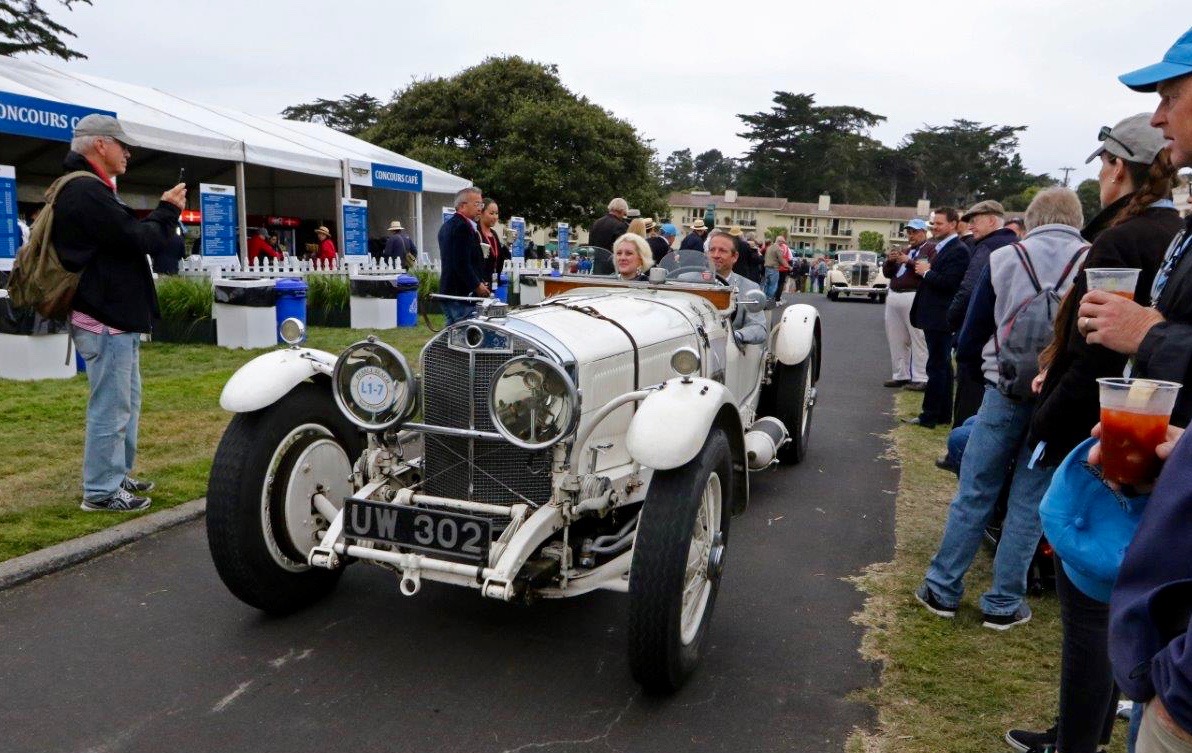 It was about sunrise when this photo was taken, hours before the Concours would officially open. As the cars are moving onto the show field, crowds are already building. Here The Keller Collection’s ‘29 Mercedes-Benz 710 SS comes forward to take its place. Rudolf Caracciola drove it to win the 1929 Ulster Tourist Trophy. It also won Class L-1 for Prewar Preservation cars at Pebble Beach. 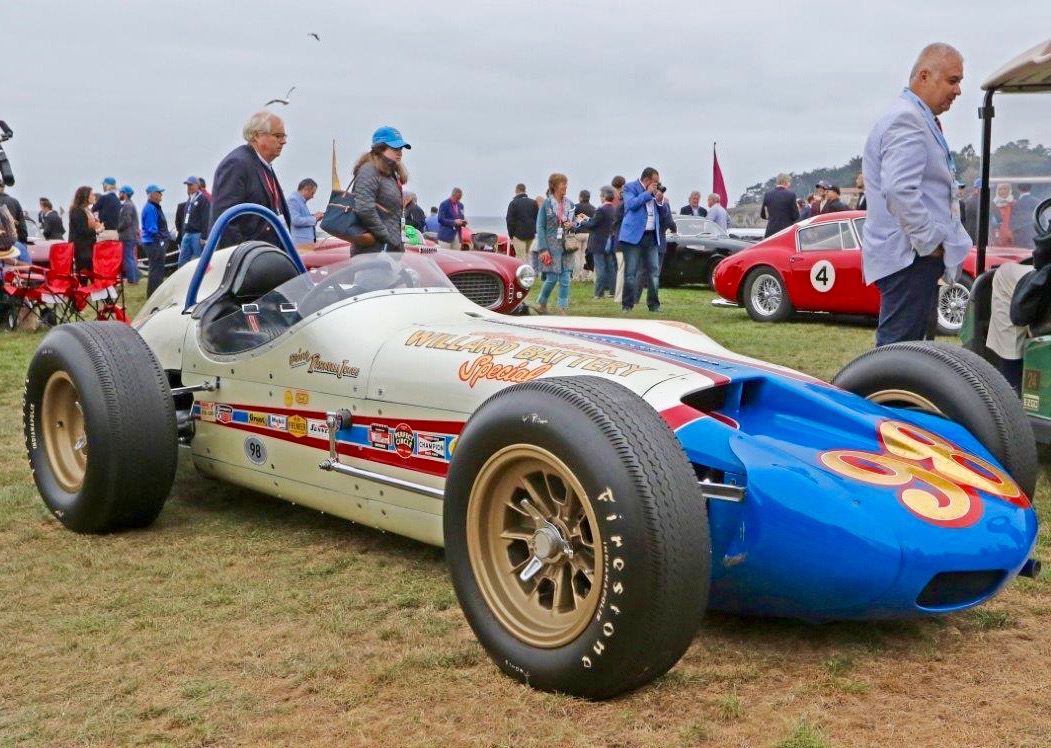 The Class is “1960s Indianapolis 500 Revolution.” It may be easier to show you what that meant than to explain it. This could be described as the starting point, the Indy Roadster; simple, rugged, tube-framed, front-engined, live axles at both ends and powered by a four-cylinder DOHC Meyer-Drake-Offy engine. Parnelli Jones drove it to victory in 1963, the next to last win for a roadster at Indy. The Indianapolis Motor Speedway Museum presented it. 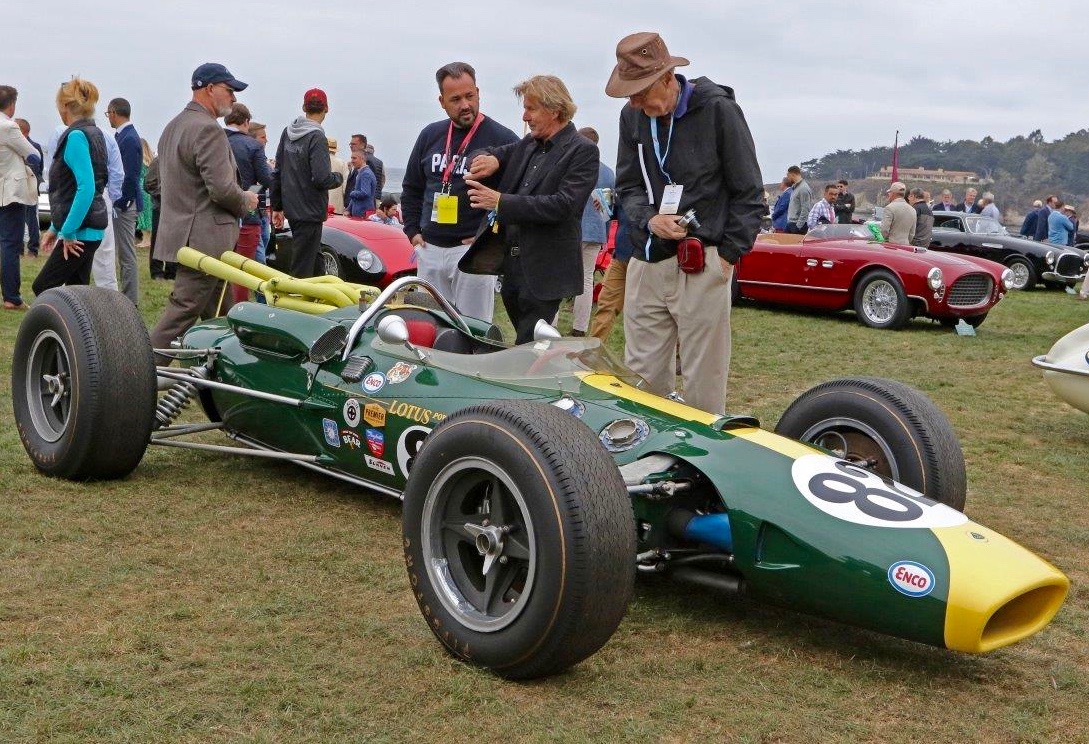 Here is where we ended up two years later, the ‘65 Lotus 38 “Powered by Ford”. Jim Clark drove it to win that year’s 500. The Lotus 38 featured a monocoque chassis with fully independent suspension and, probably most significantly, an engine located behind the driver. That engine was an all-new DOHC small-block V8. Today the car is in the care of The Henry Ford museum. 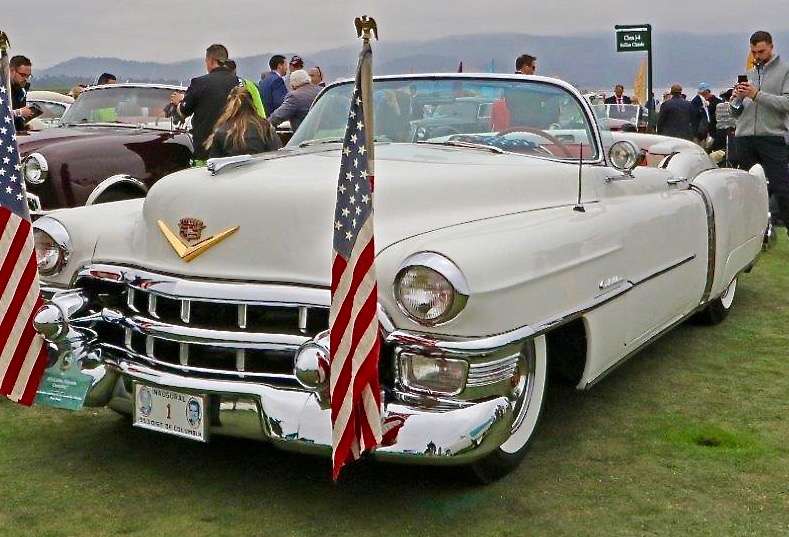 Anne & Robert Lee’s ‘53 Cadillac Eldorado Convertible transported President Eisenhower during the 1953 Presidential Inauguration Parade. It marked a time of exuberance in America following WW ll. Car manufacturers played to this sentiment and produced ever bigger, more exciting shapes. Its acres of sheet metal were adorned by copious amounts of chrome. 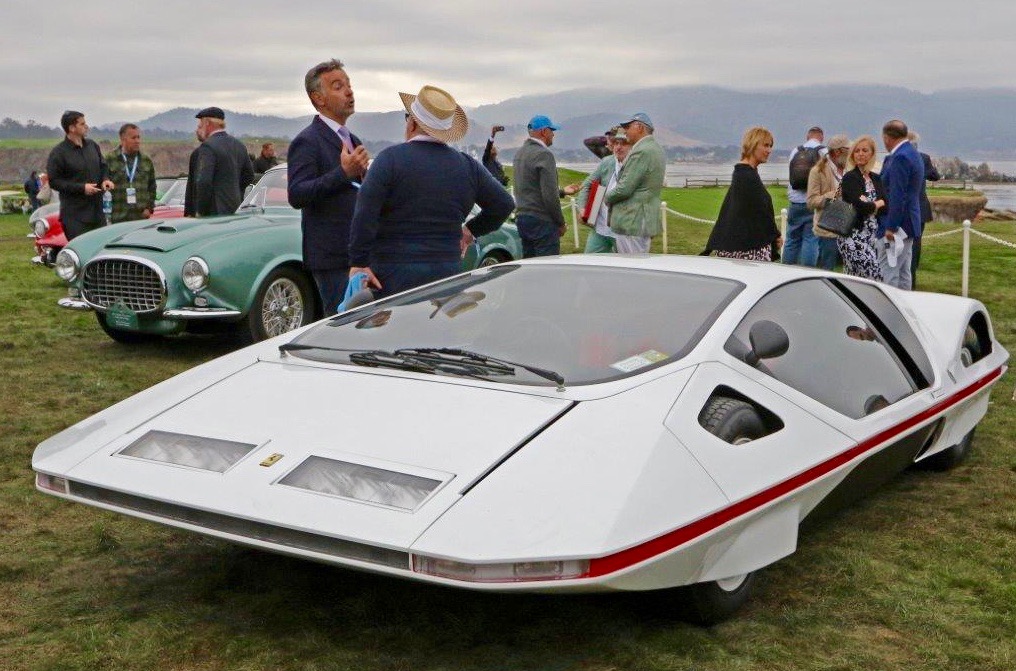 It was hard to believe that the Modulo is an almost 50-year-old design! Sprung on the automotive world at the 1970 Geneva Auto Show, it would garner numerous international awards. Constructed by Pinninfarina and based on a design by Paolo Martin, it sits on a Ferrari 512 S racing chassis. It projected an overwhelming presence at Pebble Beach, winning the Strother MacMinn Most Elegant Sports Car award.

The “Postwar Sports” class gave us another opportunity to view racecar evolution. This is Max Girardo’s very early Ford GT40 roadster, chassis #108. It still wears wire wheels and a somewhat high nose and Weber-carbureted 289 Cobra engine. The first of a handful of prototypes, it spent its life primarily as a test car and demonstrator while at Shelby American. It had been track-tested by Ken Miles at Riverside and had been mothballed for years before first changing hands via Kar-Kraft to Harley Cluxton. 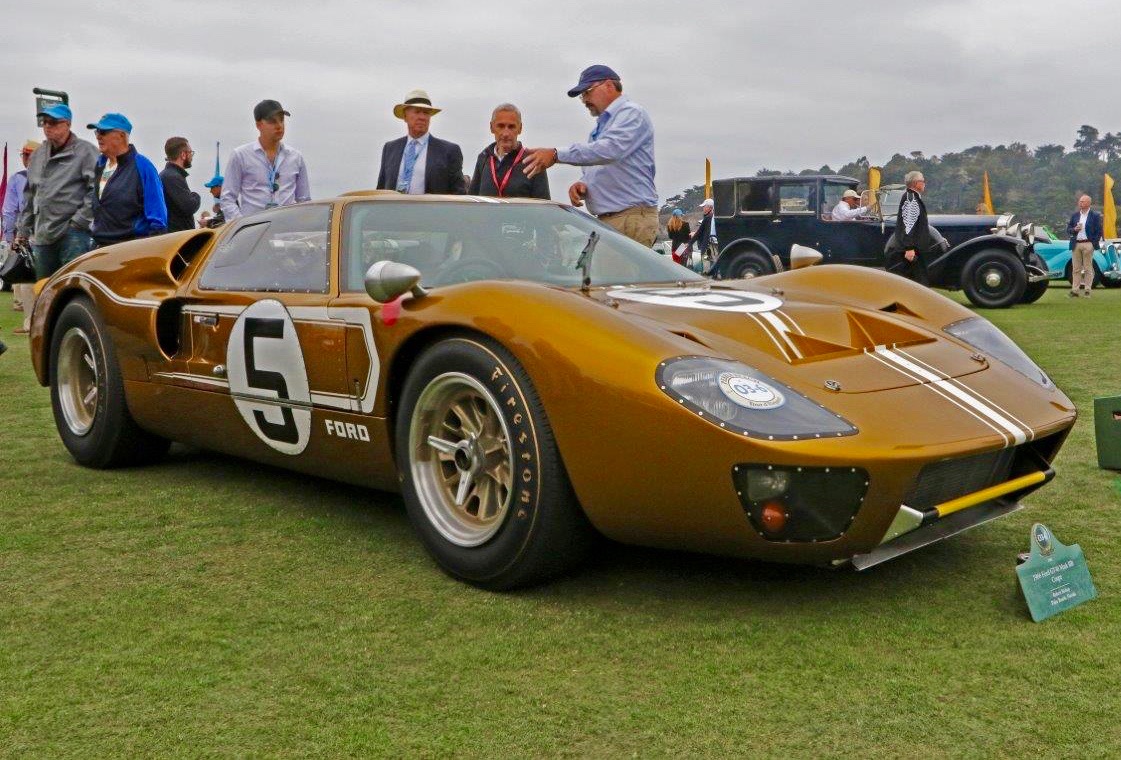 A little further down the line was Robert Bishop’s ‘66 Ford GT40 Mark llB, Postwar Sports Class winner. This was the last iteration of the GT40 concept before Ford moved to the Mk IV. The shape is recognizable but has clearly evolved from Girardo’s car. In back, the engine has grown from 4.7 liters to 7.0, while the wheels have gone from wire to cast. If you look carefully, you can see the “Gurney Bubble” over the driver’s head. It allowed driver Dan Gurney to have additional headroom. He and Jerry Grant would DNF in the car (painted red/white) at Le Mans in 1966 and Chassis #1047 also posted a DNF at Le Mans and won the 12 Hours Of Reims in 1967. 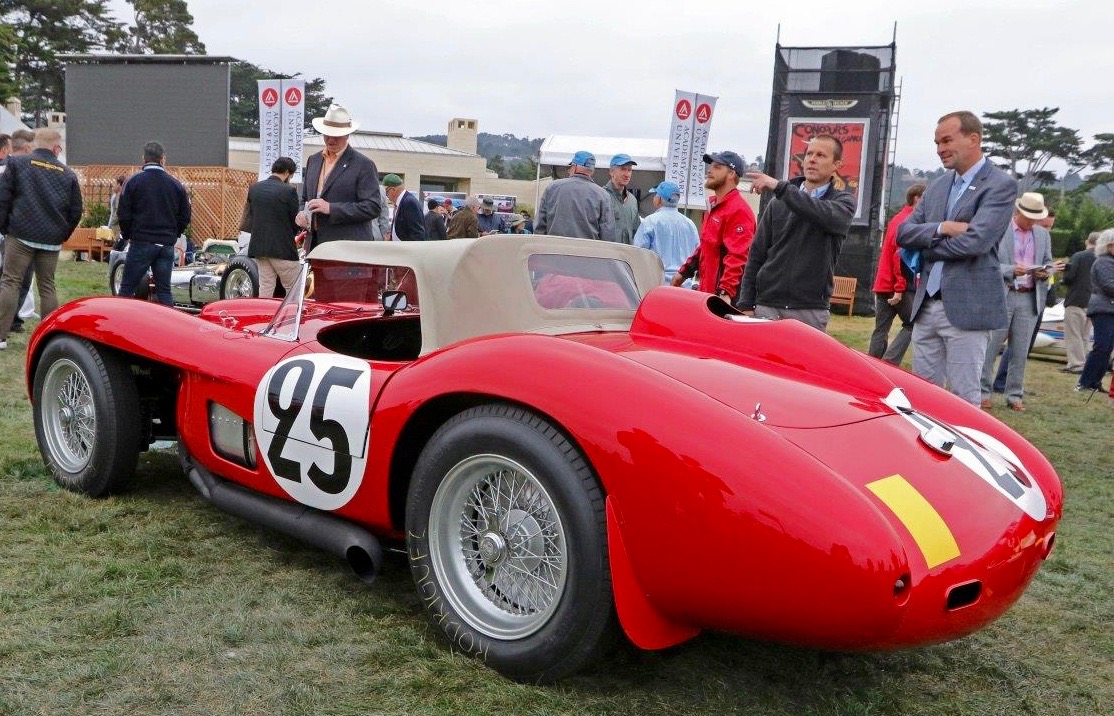 This car may ask a question that’s never been answered before: “How do you make a Ferrari Testa Rosa ugly?” The answer may lie in fitting it with a top. Sometimes the Concours rule book requires a road car to be fitted with full road equipment. It doesn’t necessarily have to be practical or even very functional, it just has to be there. Les Wexner’s ‘56 Ferrari 500 Testa Rosa Scaglietti Spyder boasts a powerful resume including competing at Monza, Le Mans and Nassau among other venues. Behind the wheel were such racing luminaries as Collins, Hawthorn and Rodriguez. 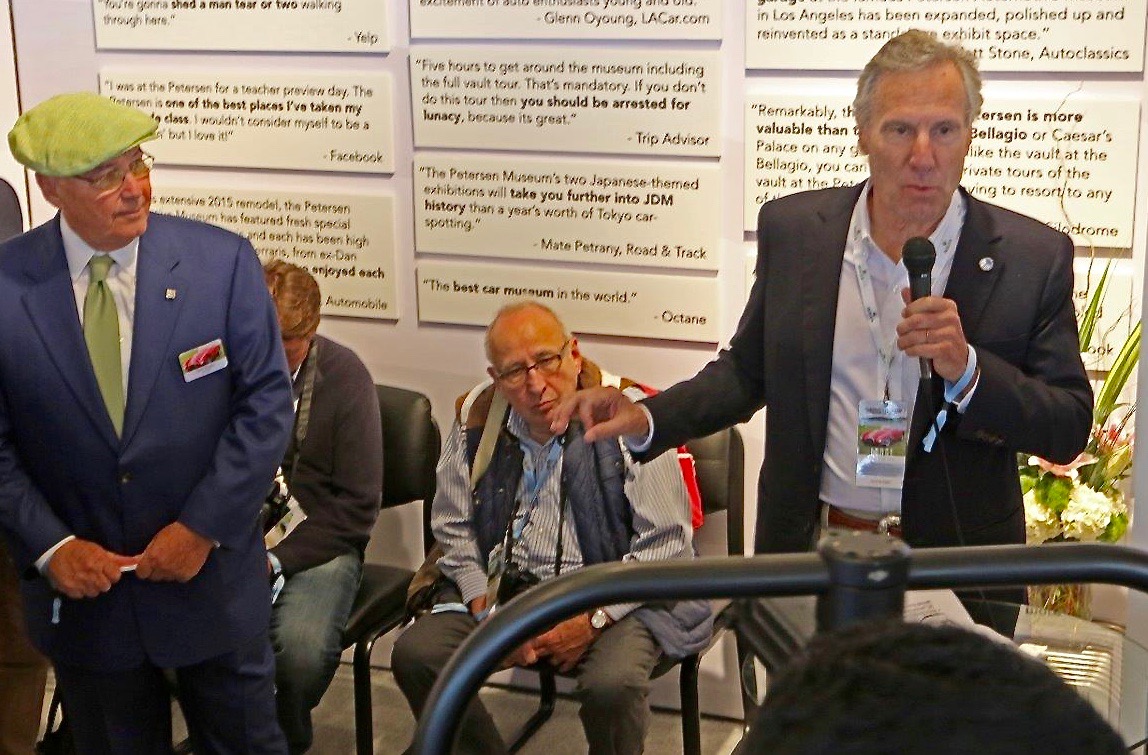 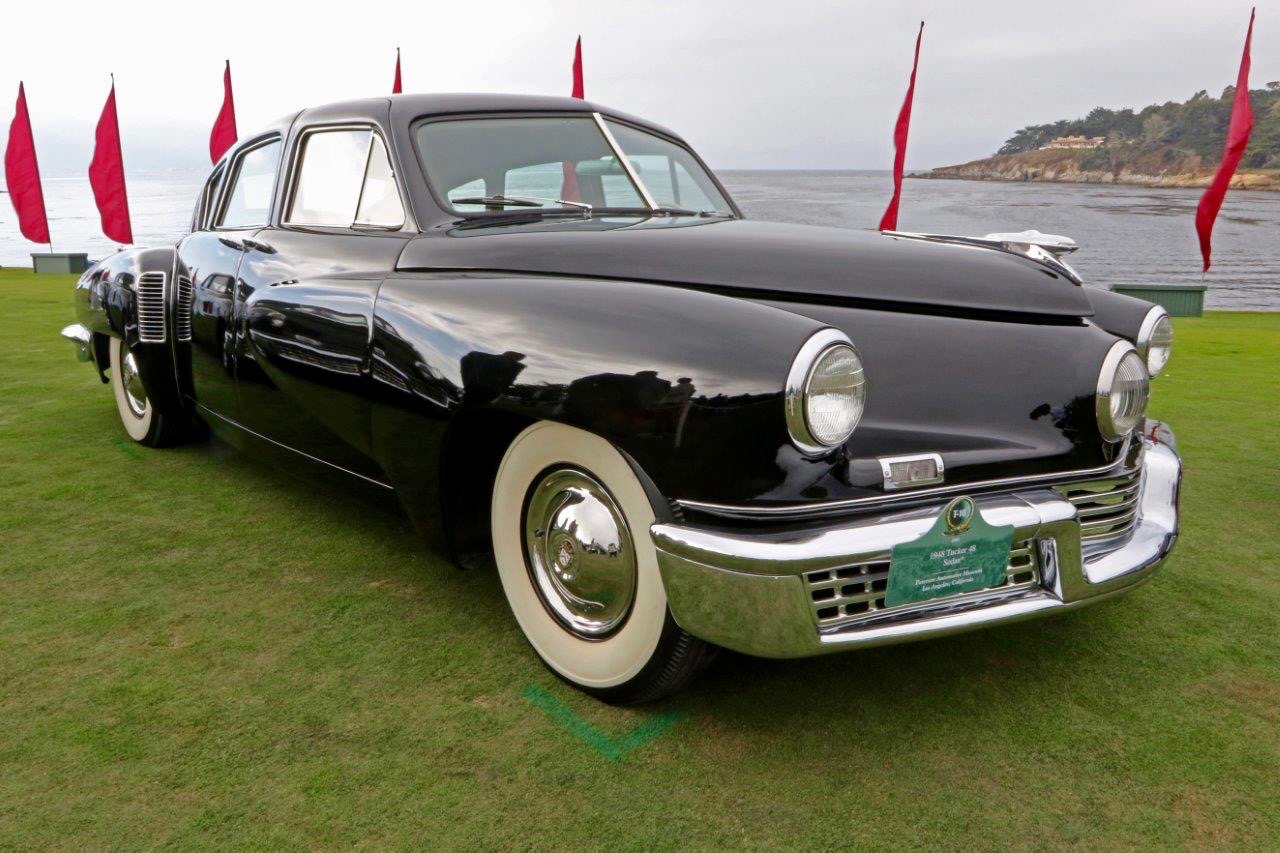 The Petersen Museum displayed its #1030 chassis Tucker. Preston Tucker brought his unique car to market when America was hungry for cars. Its styling and radical rear engine layout enthralled consumers. Unfortunately, it was not to be and the company collapsed after a very limited production run. The story was famously told in the Francis Coppola film, Tucker: The Man and His Dream. 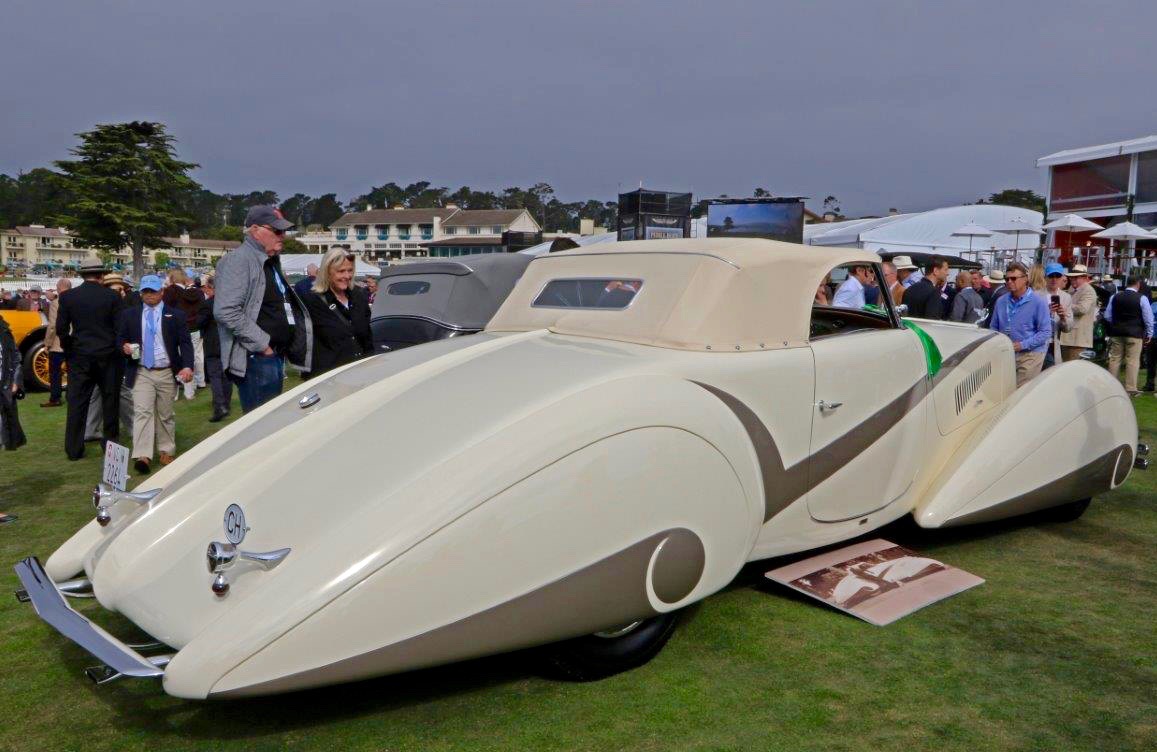 Coach-built customs always have a place on the green at Pebble Beach. This is Jim Patterson’s ‘37 Cadillac Series 90 Hartman Cabriolet, shown for the first time after an extensive restoration. Originally built for a wealthy Swiss playboy, its size isn’t an optical illusion; it is roughly 22 feet long! It won Class C-1 for American Classic Open cars. 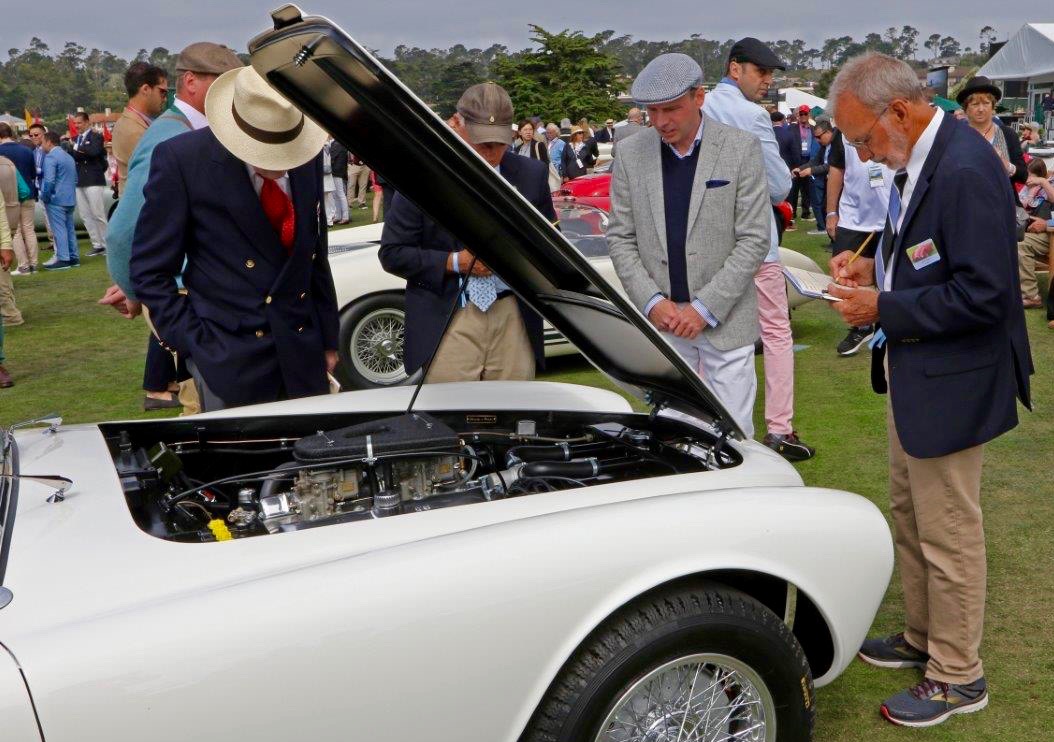 The moment of truth for every Concours’ entrant comes when he faces the judges. An often very long and arduous process all comes to this moment. Here Lennert Schouwenburg explains the fine points of the Strada e Corsa ’53 Siata 208S Motto Spyder while his brother Jurriaan waits patiently behind him. The brothers traveled all the way from The Netherlands. Their car had strong U.S. ties, as it was the same car in which Don Diffenderfer won the 1960 SCCA FP National Championship. It languished disassembled for years until the just completed restoration and debut at Pebble Beach Concours d’Elegance.