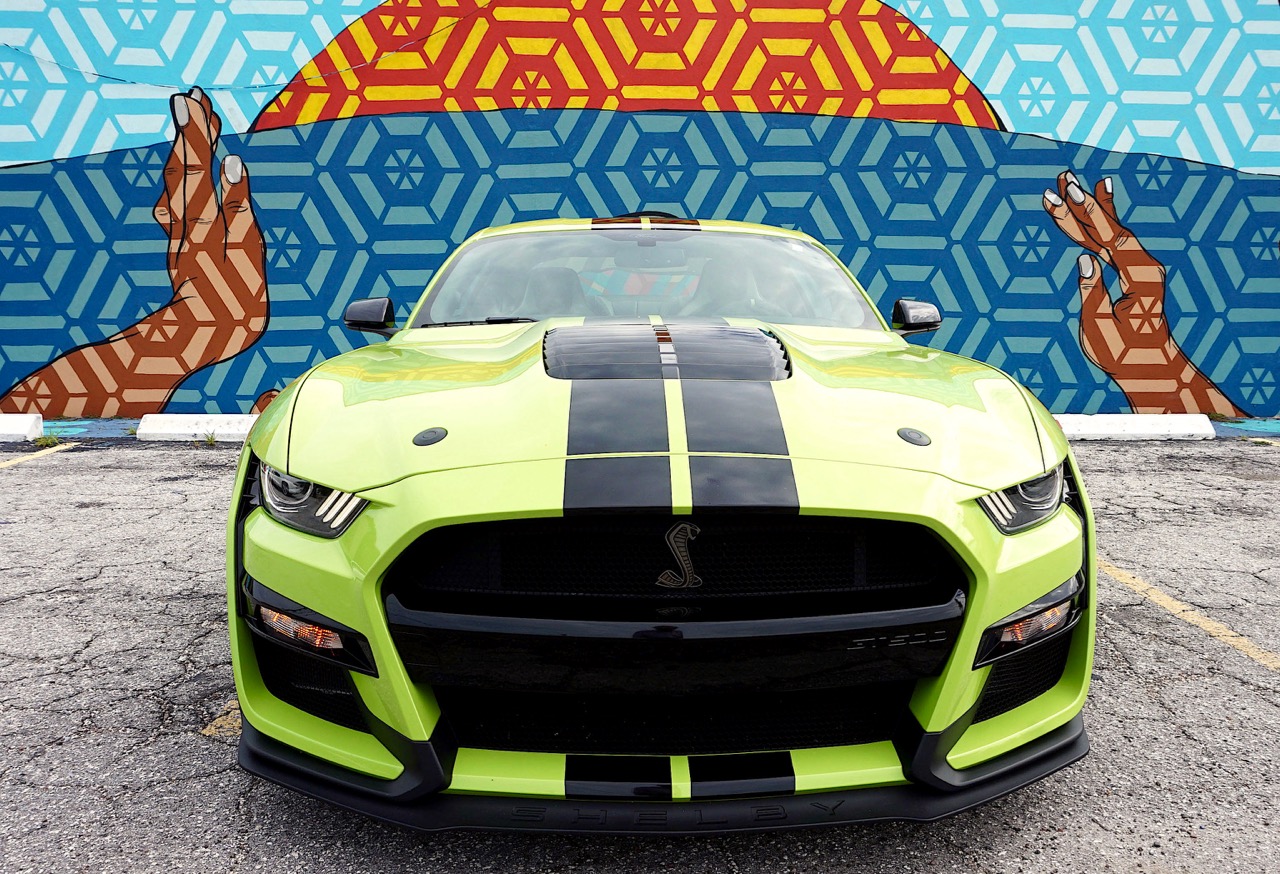 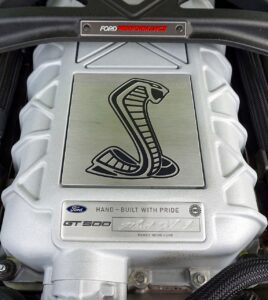 Let me introduce you to Juno. This NASA space probe, currently doing loop-di-loops around Jupiter, has the distinction of being the fastest man-made creation ever. How fast? When it left Mother Earth’s gravitational pull back in 2011, it was accelerating at an astonishing 25 miles per second. To put that into a little context, a 0.50-caliber bullet travels at roughly half a mile per second. So we’re talking 50, yes five-oh, times faster than a speeding bullet. That’s fast. Smokin’ fast.

Accelerating away from a stoplight in the rolling-insanity that’s Ford’s latest supercharged, 760-horsepower Mustang Shelby GT500, is maybe the closest thing you can get to hitching a ride in Juno.

And, just as with Juno in full slingshot mode, your face will distort, your cheeks quiver, your belly-button will go from an outty to an inny, and your eyeballs might well compress to the back of your skull! 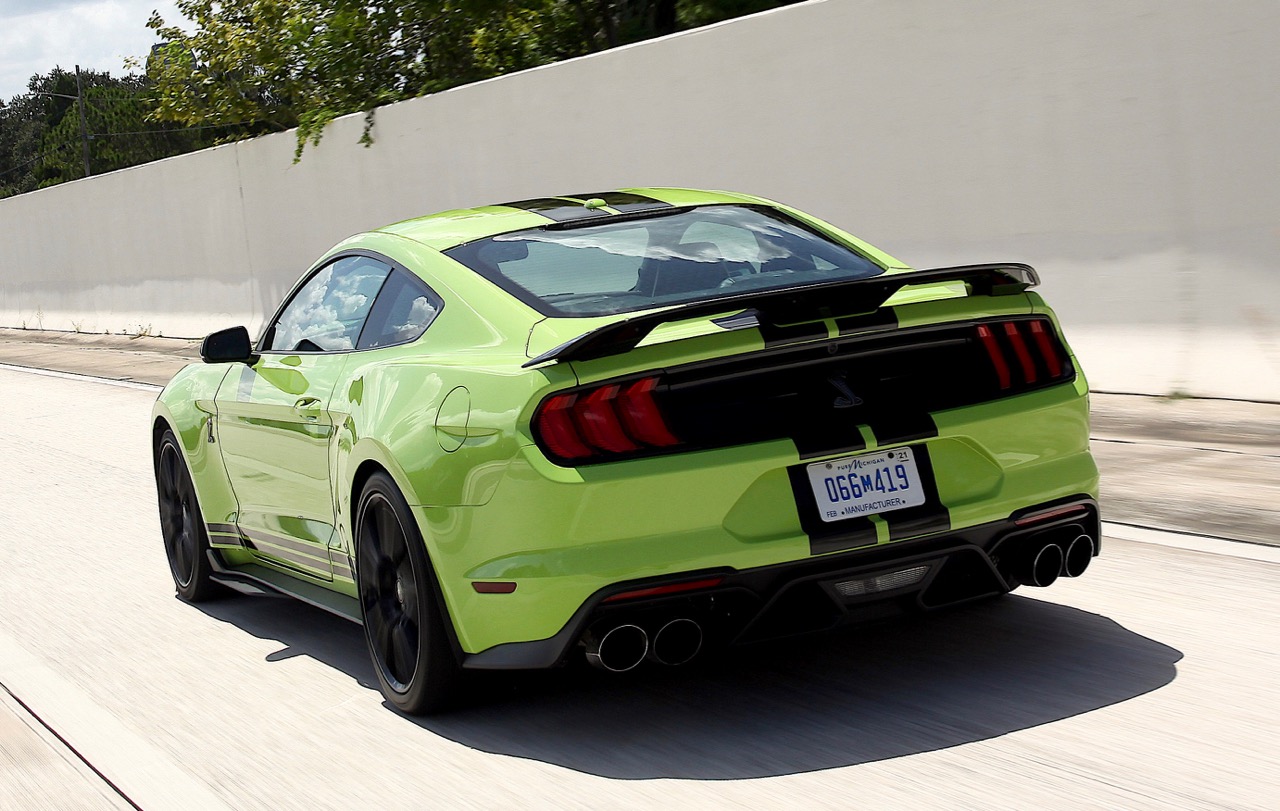 Ford claims zero-to-60 mph acceleration in 3.3 seconds. That’s fast, though not quite a match for some of the world’s Hypercars – a $3 million Japanese electric Supercar called, don’t laugh, the Aspark Owl, claims 0-to-60 in 1.7 seconds. But the problem with the Shelby is that for most of those 3.3 seconds, its huge Michelins are trying in vain to contain its big V8’s locomotive-like 625 pound-feet of torque with resulting wheelspin.

What we have here is not only the most powerful factory Mustang ever, but the most powerful Ford. Remember the Blue Oval’s performance flagship, the $500,000 GT Supercar, comes with a mere 660 horsepower – precisely 100 horses down on the Shelby.OK, I hear you; unless you have a racetrack in your back yard, or want to risk jail-time high-tailing it across Alligator Alley, where on earth can anyone sensibly use all this power and performance? 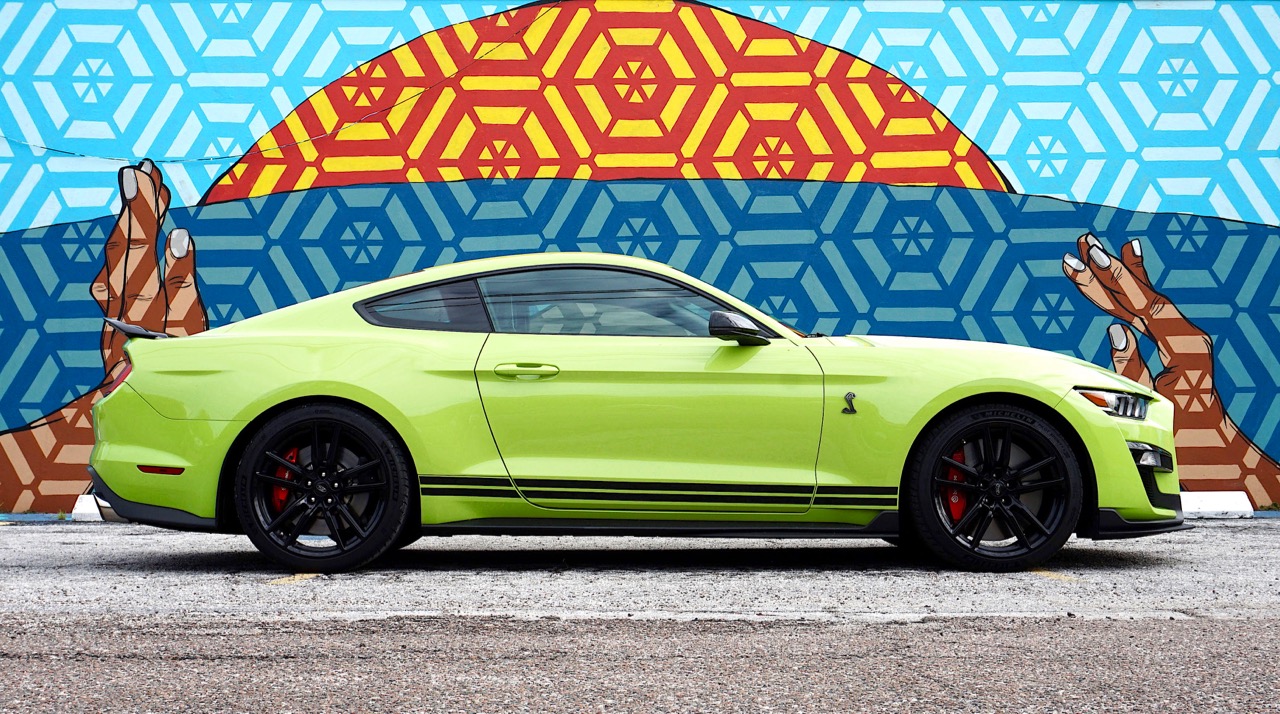 You can’t. But it’s kinda nice to know it’s there. And plenty of owners do head to the racetrack, or drag strip, to experience this galloping Mustang’s truly breathtaking performance. But to drive this projectile – however fast you want – is to adore it. Just the outrageous, window-rattling thunder from its storm-drain-sized exhausts, is worth the $72,900 sticker. Whoa there cowboy. Did I just say $73-grand? For a Mustang? Sure did. And if you start adding-on a few options – like the $18,500 Carbon Fiber Track Pack – you can push the price north of $100,000. 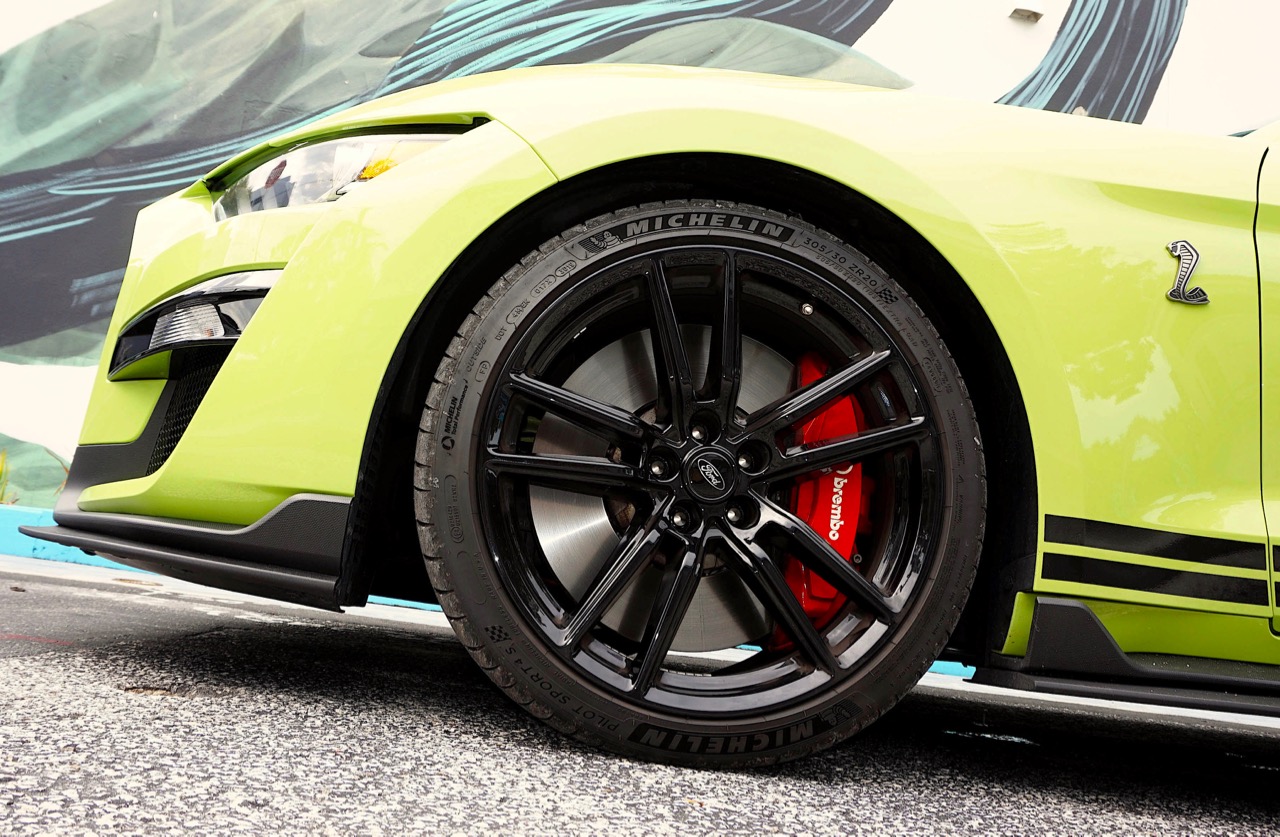 But the GT500 is really a hand-built racecar that just happens to be road-legal. A car with a truly hand-built engine bolted together with racecar precision and technology. Take its new seven-speed dual-clutch Tremec automatic. This thing has the ability to shift gears in as little as 130 milliseconds. It has front brake rotors that measure 16.5 inches across. Its driveshaft is made of carbon fiber. If this thing was any more exotic it would be dancing around a pole!

And see it in the metal; especially in our test car’s Kermit-like shade called Grabber Lime, and it grabs more attention and camera phone selfies than any Ferrari. Just look at the thing. That air-gulping front end looks big enough to swallow a Mack truck. The louvered air scoop on top of the hood is almost three feet long and two feet wide, yet barely big enough to vent the huge heat created by the motor. 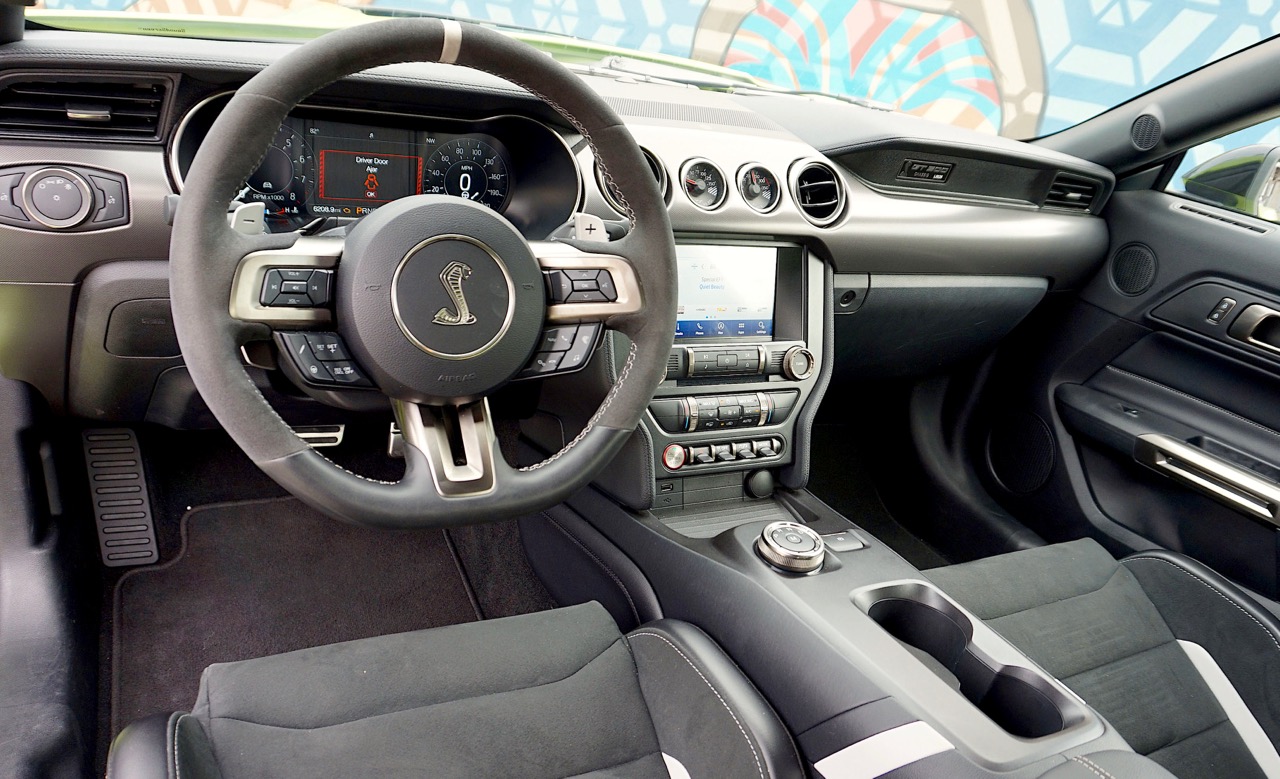 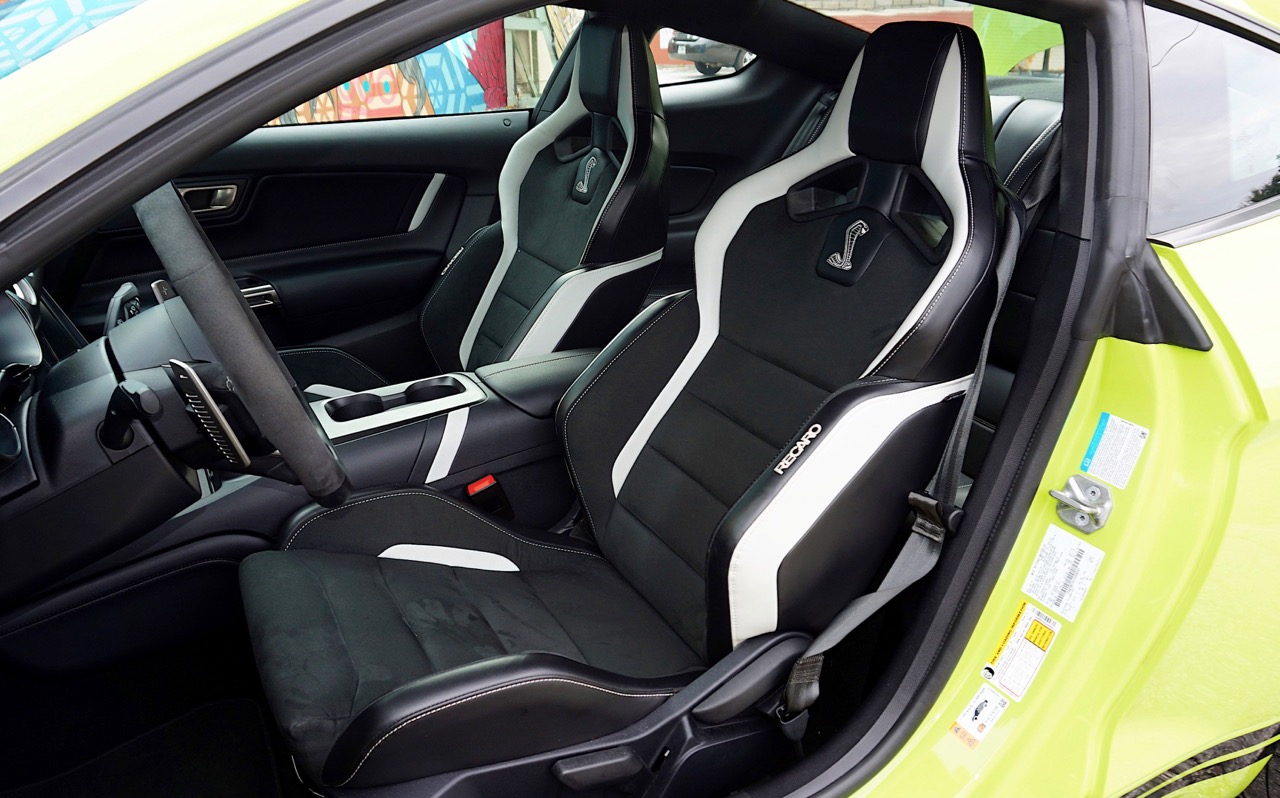 The good news for us mortals however, is that this GT500 is a true Dr. Jekyll and Mr. Hyde. On a daily commute it can be totally docile, smooth riding, mild-mannered and easy-going. But gripping that salami-thick, suede-rimmed wheel, being held tightly in place by a race-style, Recaro bucket seat, gazing over that huge power-domed hood, you feel ready to take the grid at Sebring. You won’t even notice the cheapo, rental-Mustang black plastic on the center console and doors, or the manual-adjust seats, or the un-illuminated rotary gear selector that will drive you crazy at night. 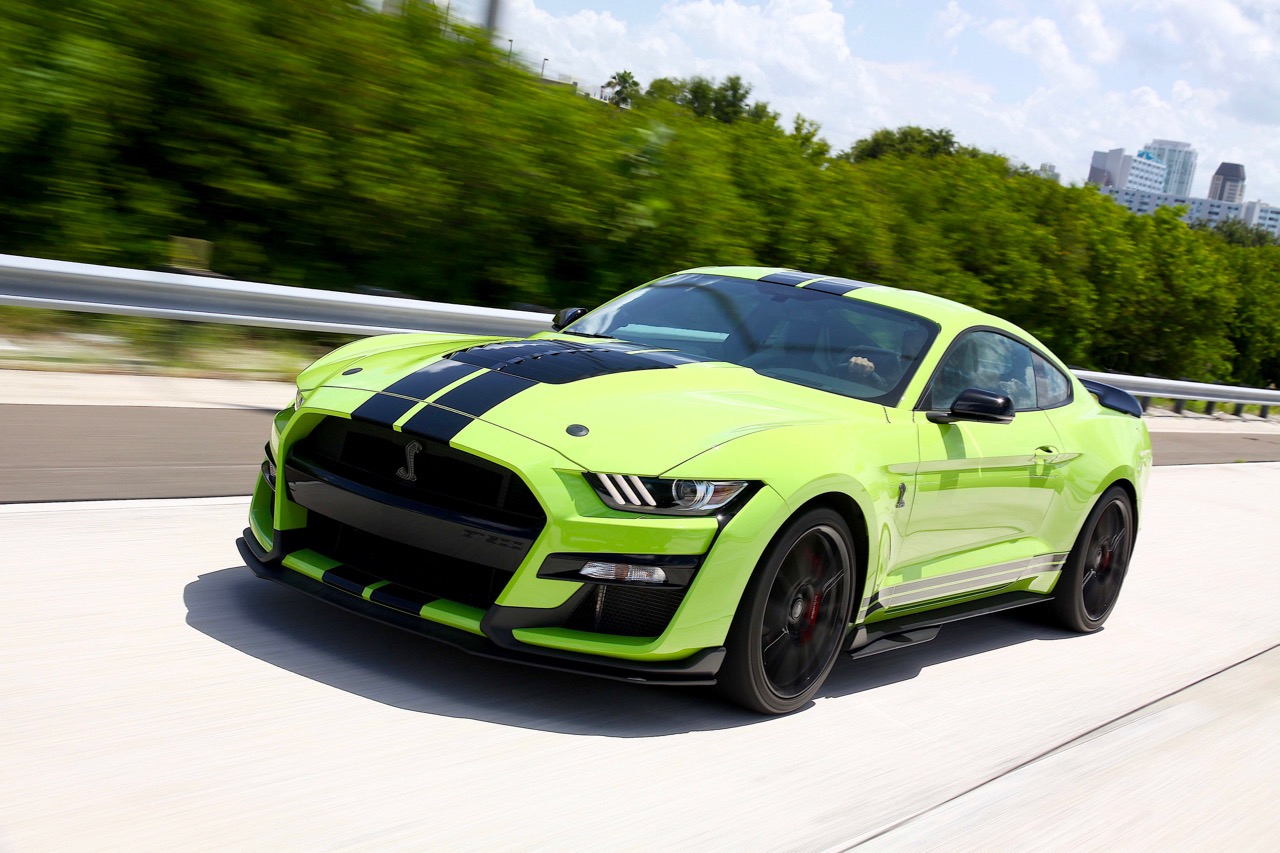 No, you’re driving the King of the Mustang pony corral. Time to pull the trigger and hoof it!