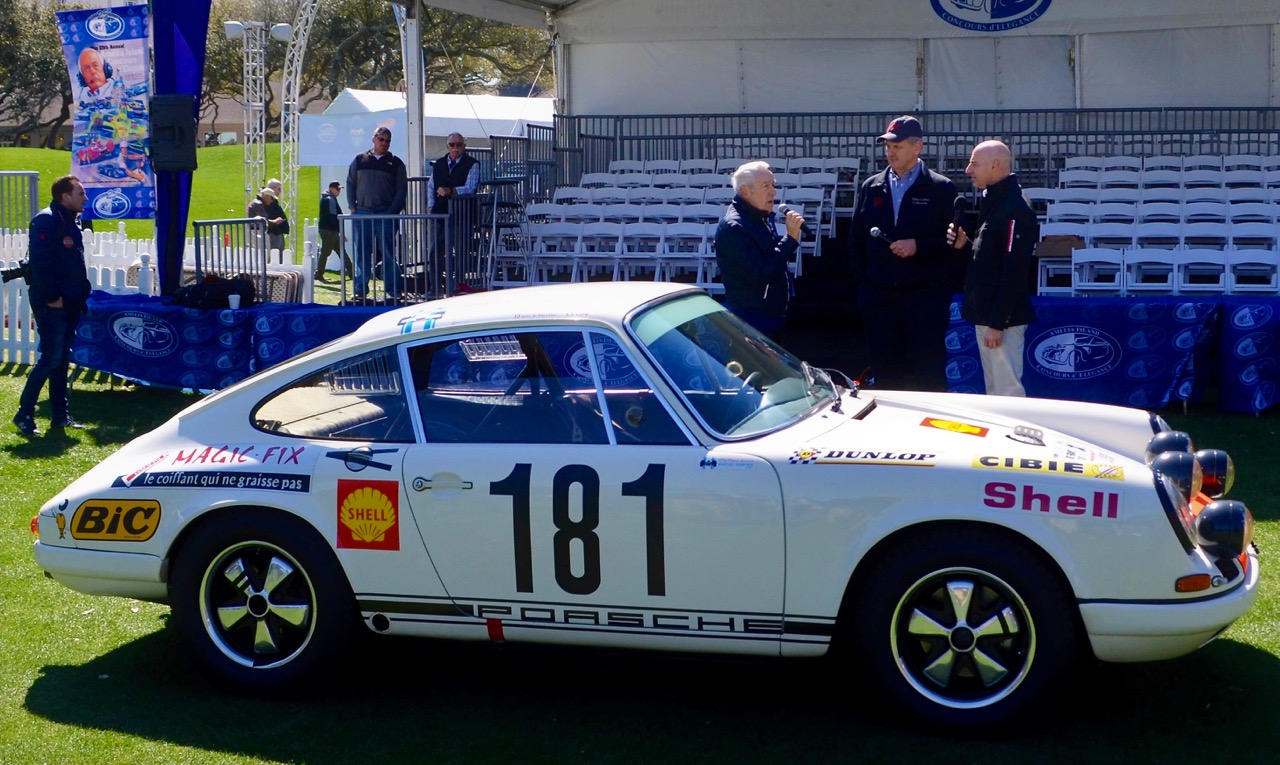 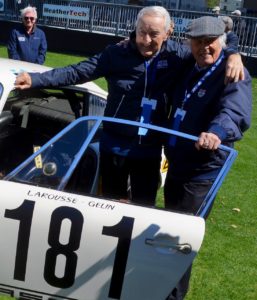 It rumbled up in front of the judges stand the day before this year’s 25th annual Amelia Island Concours d’Elegance, shiny in the bright March sunlight, a Porsche racecar unlike any other. Racing champion Gérard Larrousse (left) stands with legendary racer Brian Redman and the French driver’s famous ‘67 Porsche 911 R.

Built to tackle the gravel and dirt of Europe’s most famous rallies of the late 1960s, the Porsche 911 R outwardly looks like the grandfather of the famed Rothmann’s Dakar rally 911 of 15 years later. But it’s actually the “first genuine 911 race sports car,” Porsche AG said. In a 1966 report by Porsche employee Rolf Wütherich, who said any rally 911 must be “superior to the current competition in its power-to-weight ratio.”

And so the 911R would meet those criteria, with 210 horsepower from its air-cooled 2-liter flat six engine and the car weighing just over 1,760 pounds. That’s almost 8.4 horsepower per pound! And the man who would help this lightweight 911 win was Gérard Gilles Marie Armand Larrousse, former sports car racing and Formula One legend born 80 years ago in France. 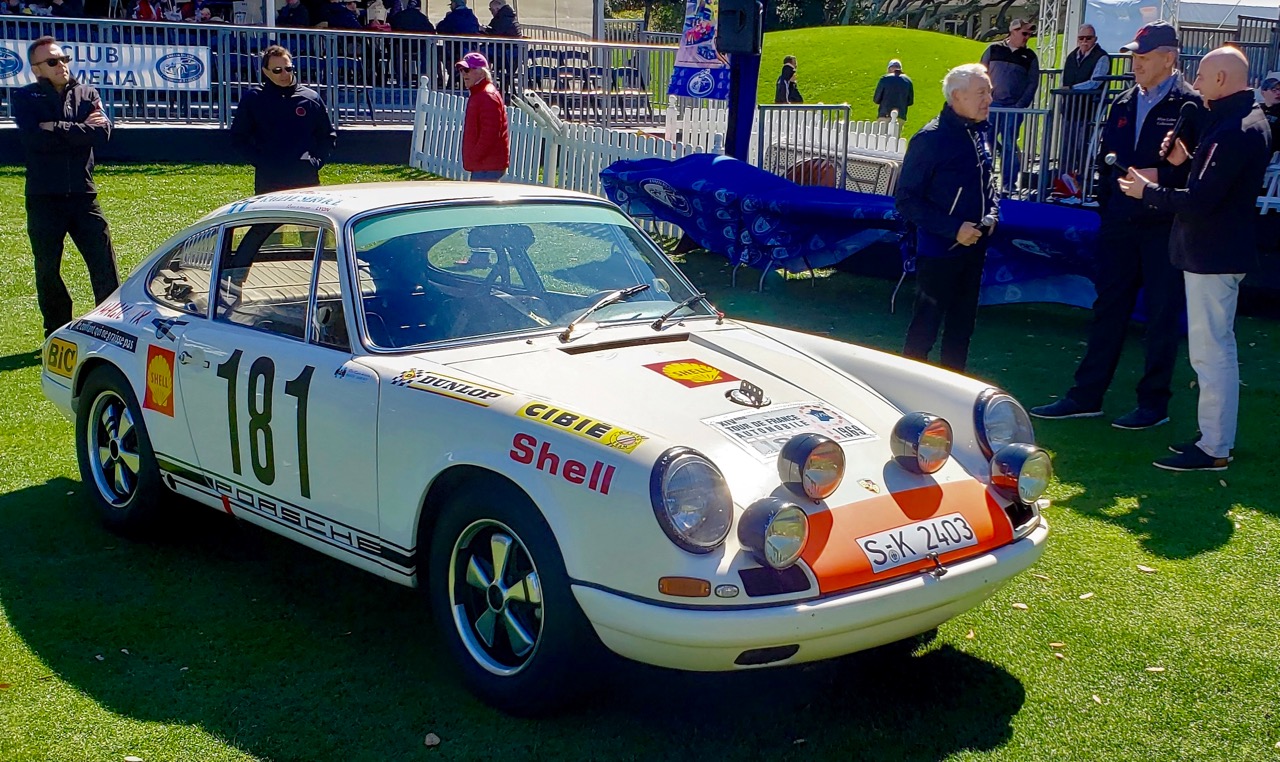 The famous driver was reunited with his rare 911R at last month’s Amelia Island Concours, thanks to Collier Auto Media and Ray Shaffer, Porsche Classic Market Development Manager, PCNA, and curator at the Porsche Experience Center, Atlanta’s Heritage Gallery. He handled the special reunion, which would soon include some more vigorous seat time with the veteran driver behind the wheel.

“You know, I can’t wait to drive that car,” Larrousse said. “I am so excited. It’s a big pleasure because I know it is in very good condition, maybe as good as when I was driving it.” 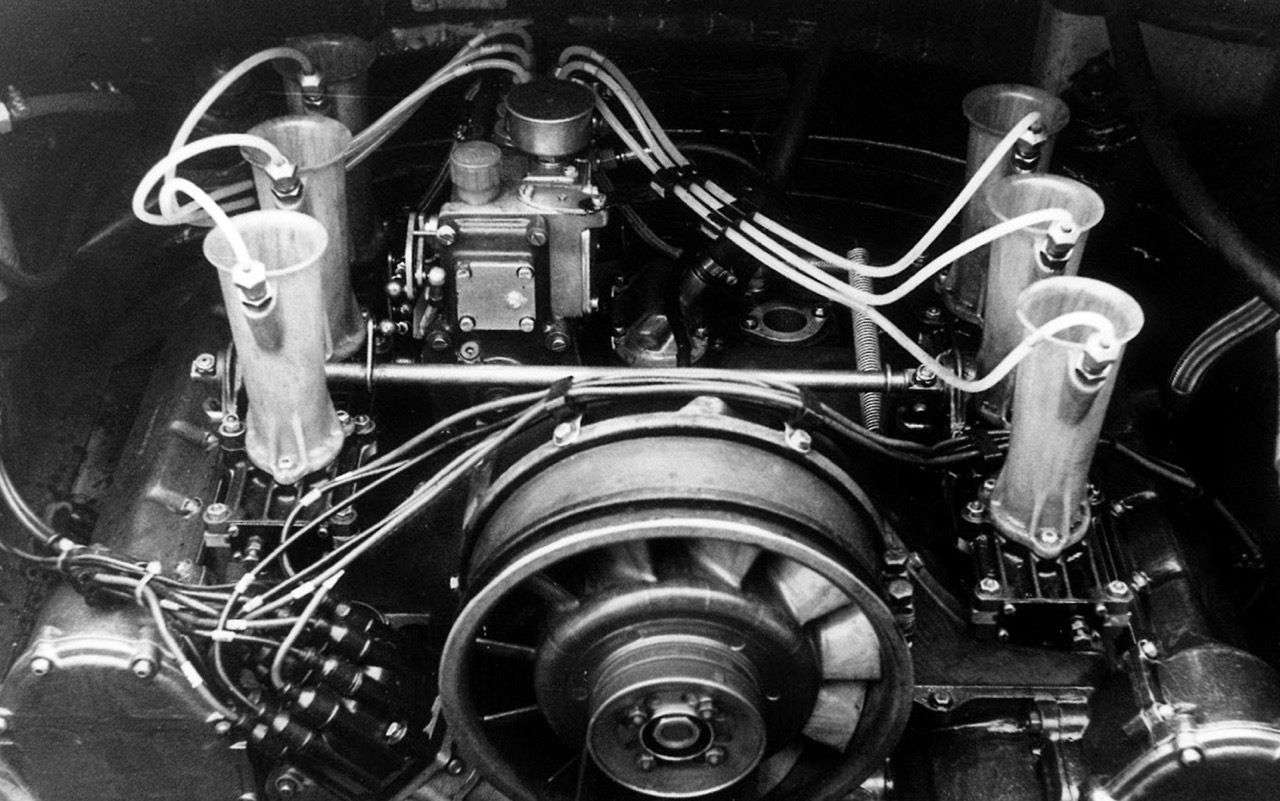 Porsche had rallied before, a factory team modifying a 911 for the Monte Carlo Rally in 1965. But when privateer Eberhard Mahle had success, Porsche began looking into doing a more serious factory 911 Rally car. The first 911 R prototype was born in 1966, showing great potential, Porsche said. It helped that its engine was very similar to that in the Porsche 906 Carrera 6, a type 901/22-race engine with dual ignition, titanium connecting rods and large triple carburetors. The company said it could hit 60 mph in under 6 seconds and top speed, depending on gearing choice, is in excess of 150 mph! 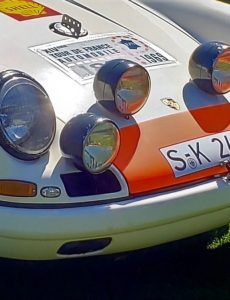 By 1967, four prototypes were built, lightness their byword. This white No. 181 is part of the Miles Collier collection at The Revs Institute in Naples, FL. The fifth one made, it gains a row of rally lights on what looks stock at first. But it is all fiberglass, except for its steel unibody, They made intense weight-saving modifications, including plastic fuel and special oil tanks and very light taillights and front turn signals to help cut about 500 pounds.

“The chassis is 911S, but the idea was to put as much lightweight parts all the way around the car as possible,” Revs Institute vice president Scott George said. “Both front fenders, doors and rear deck lid are all fiberglass. The door handles are resin. Even the windshield glass was meant to be thinner than the production cars. Every ounce of sound deadening; every ounce of unneeded weight was taken out.” 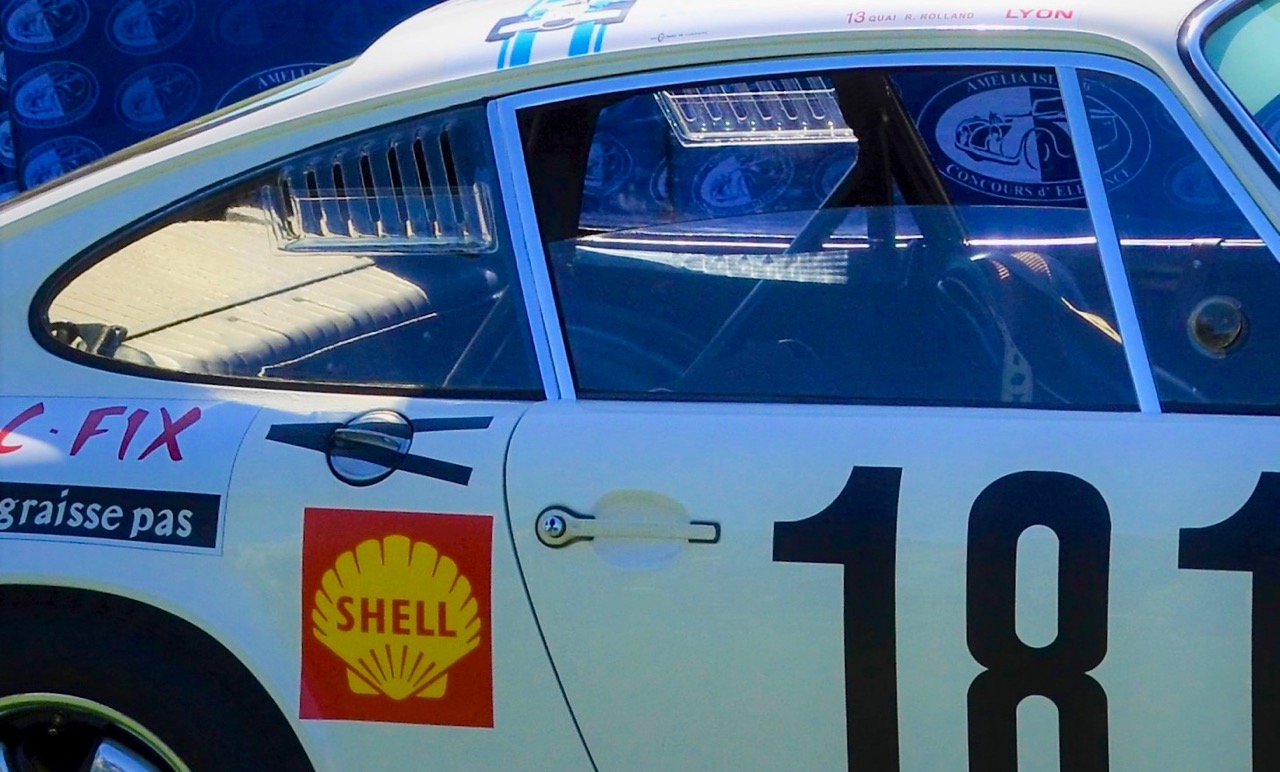 Porsche states that the windshield was made of thin four-millimeter glass, the other windows two-mm of Plexiglas, and vents built into the wing and rear side windows. Inside lies an interior that looks familiar, a central 10,000-rpm tach, speedometer and gas/temperature gauge under the stock-looking dashtop where they were in a stock 911. But two other gauges were deleted, as was ashtray, cigarette lighter and passenger’s sun visor. The side window cranks were gone; leather straps used to raise and lower the thinner Plexiglas. And a pair of lightweight racing buckets with padding held Larrousse and navigator. 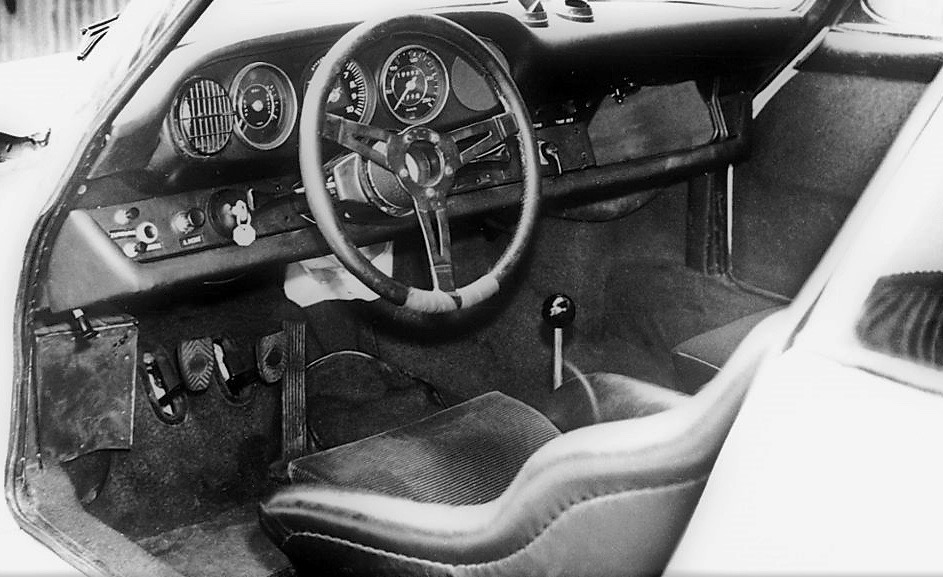 To secure GT homologation, Porsche had to build 500 of what was a very expensive car. After those four prototypes, it only made 19, with 15 for customers, the rest for factory teams, Porsche said. It debuted in 1967 at Circuito del Mugello, drivers Vic Elford and Gijs van Lennep coming in third overall. The Marathon de la Route endurance race in 1967 saw “Quick Vic” Elford, Hans Herrmann and Jochen Neerpasch win in a 911 R equipped with a semi-automatic Sportomatic transmission, Porsche said. Lightweight 911 R 2.0 Coupé, Gerard Larrousse at the 1969 Tour de France, below. 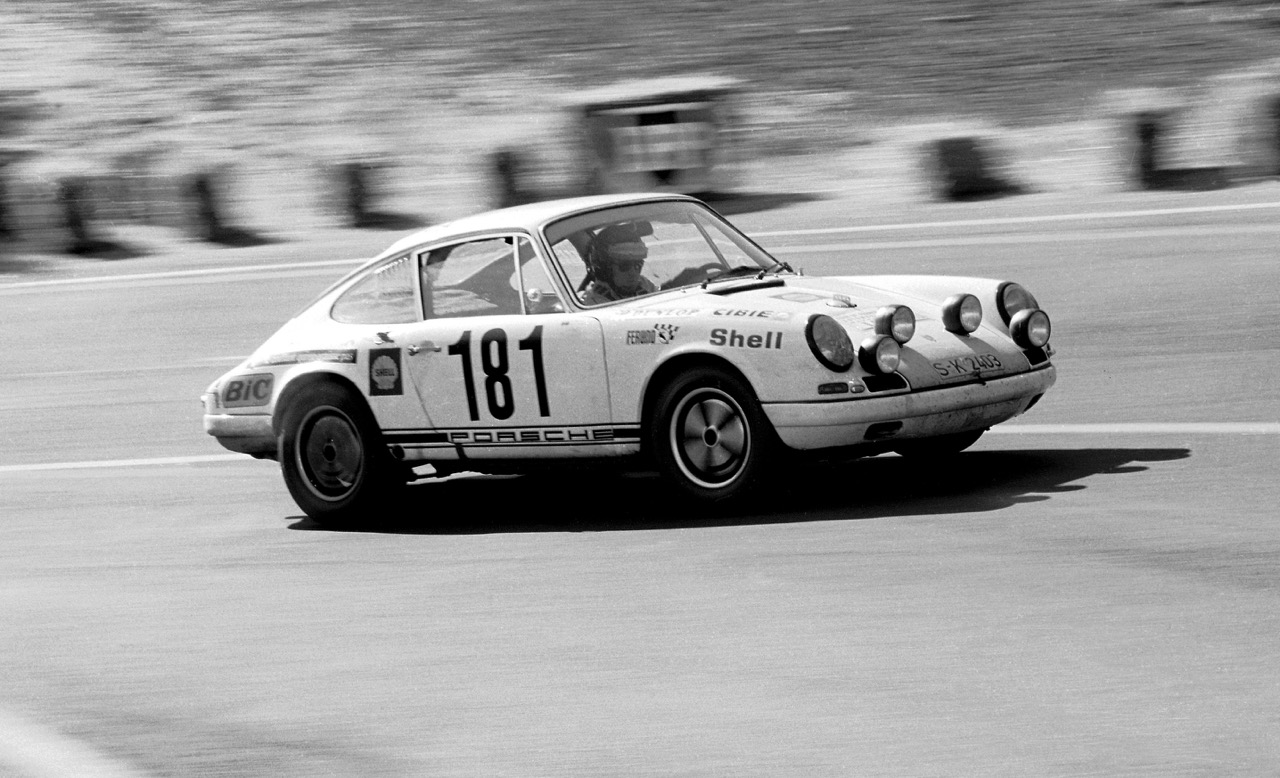 Larrousse remembers starting his rally career in a little NSU, then a Renault Alpine before heading to Porsche after competing against its team driver, Vic Elford, who helped him get his job there.“I think he helped me a lot,” Larrousse said of Elford. “Porsche was looking for a French driver.” Larrousse also remembers that engineers had to cut the chassis to fit the 901/22-race engine in the 911 R, and it didn’t fare well in an early German rally.

“I drove the car and it was a drama because the engine broke down immediately at the beginning of the rally,” he remembered. “And the Porsche people were so sorry. They went to the factory from Stuttgart and changed the engine in two hours.”

The Revs Institute did the restoration on the car, but was looking forward to having its winning driver visit in a few days to add information to its archive on the 1967 LIGHTWEIGHT: PORSCHE 911 R. 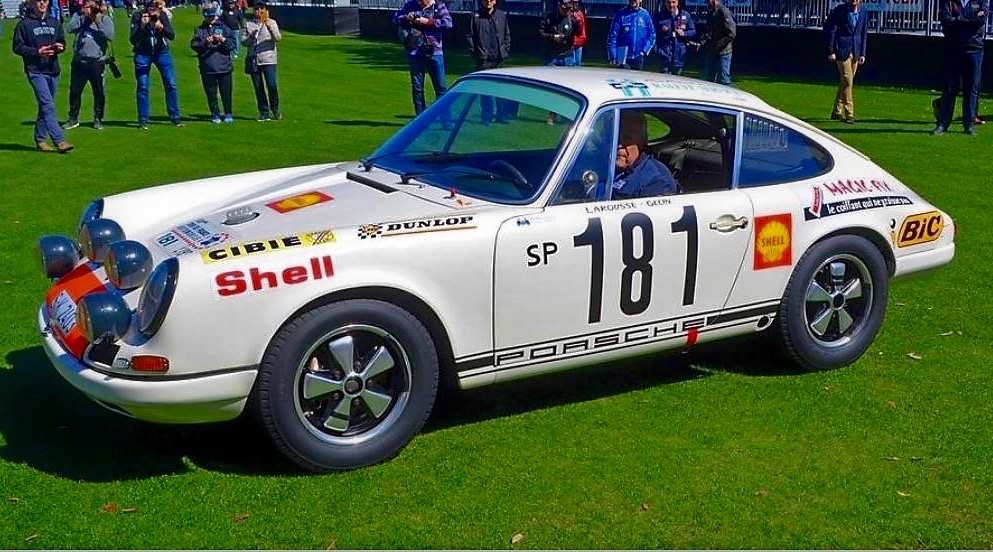 ″It is wonderful to have one of the great personalities in international motorsports over the last 50 years join us, so I am thrilled as always to unite a car and driver of the magnitude of Gérard Larrousse,” Miles Collier said. Larrousse’s biggest successes in international rallies came in a Porsche 911R that won the 1969 Tour de France and Tour of Corsica, and placed second at the Monte Carlo Rallies in 1969, 1970 and 1972.