The Ford Edge ST is quick, fairly agile and very usable. But this is no Mustang GT. Instead, it’s a way to carry the family; then drive home on the back roads you used to take that Mustang on before two kids and a dog, blogs Dan Scanlan. 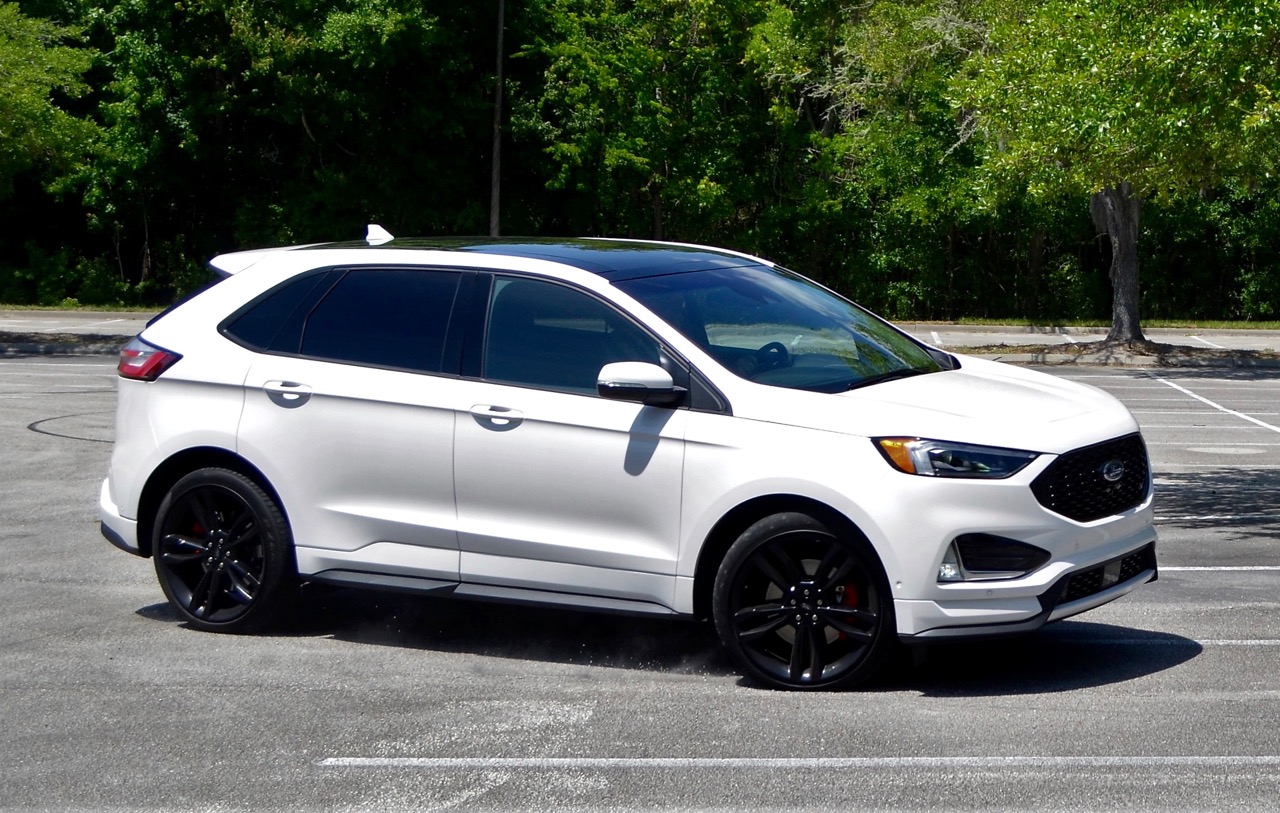 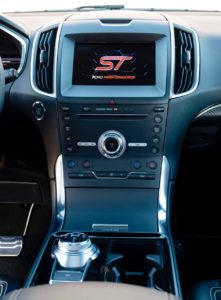 The idea of a really sporting crossover isn’t new.

BMW has had the X5 for 20 years, while the Porsche Cayenne is 16 years’ strong and Jaguar has its new F-PACE. But if I say Ford Edge, most folks think of a rounded crossover that’s more suited to the school drop-off lane vs. fast lane – until Ford Performance got its mitts on it.

Ford Performance is the group behind the company’s serious stuff, like GT and Focus RS. Now they’ve turned out a version of Ford’s popular (142,000-plus sold in 2017; just over 132,000 last year) crossover into a semi-muscle machine.

It’s what’s under the hood of this 4,447-pound Edge ST that’s my favorite – a 2.7-liter twin-turbocharged EcoBoost V-6 with 335 horsepower and 380 pound-feet of torque just about hidden under plastic badged FORD PERFORMANCE. There’s a fairly quick-shifting eight-speed transmission with paddle shifters, “Sport” setting and all-wheel-drive. It’s “a performance SUV with a track mentality,” Ford said. This familiar mill does duty in Ford F-150s, and the 2017 Fusion Sport. Here, it’s a quick companion in either driving mode. 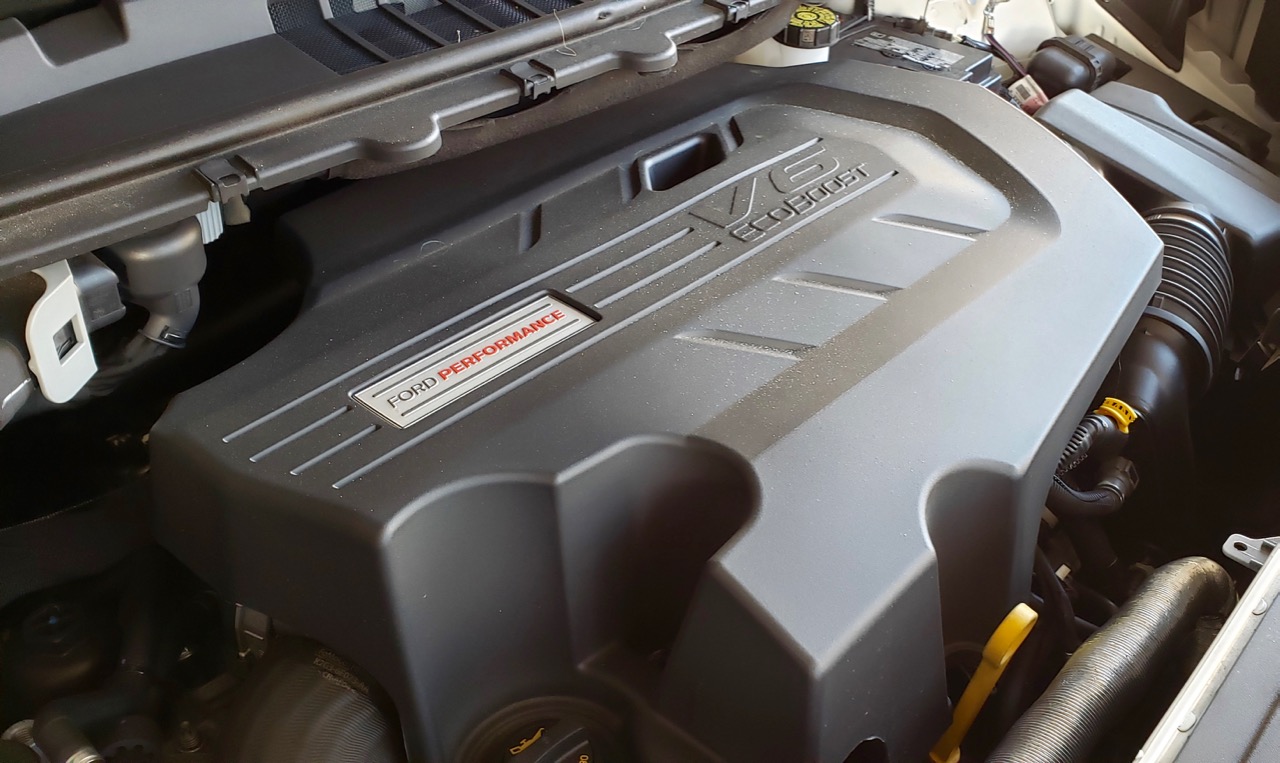 In normal mode, our 10,000-mile-old test vehicle’s V-6 turbo boost comes in a millisecond after we launched, the eight-speed shifting quick to hit 60-mph in 6 seconds. The all-wheel-drive gave a hint of front wheelspin before the rears joined in. I normally disconnect rear-wheel-drive during normal driving to save gas unless extra traction is needed. The Eco-Boosted Crossover also had a fairly transparent auto engine cutoff, seamless in shutdown at stoplights, but clunky on start-up.

Tap the “Sport” button in the middle of the rotary selector in the center console, and engine response and transmission action quicken, delivering 60 mph in a quick 5.5 seconds. There’s a nice exhaust growl electronically funneled into the passenger cabin via Ford’s Active Noise Cancellation system. That said, 100 mph took an average 15.4 seconds. The 2017 Ford Edge Sport AWD we tested when new did 60 mph in 6 flat with its 315-horsepower V-6 and six-speed transmission. 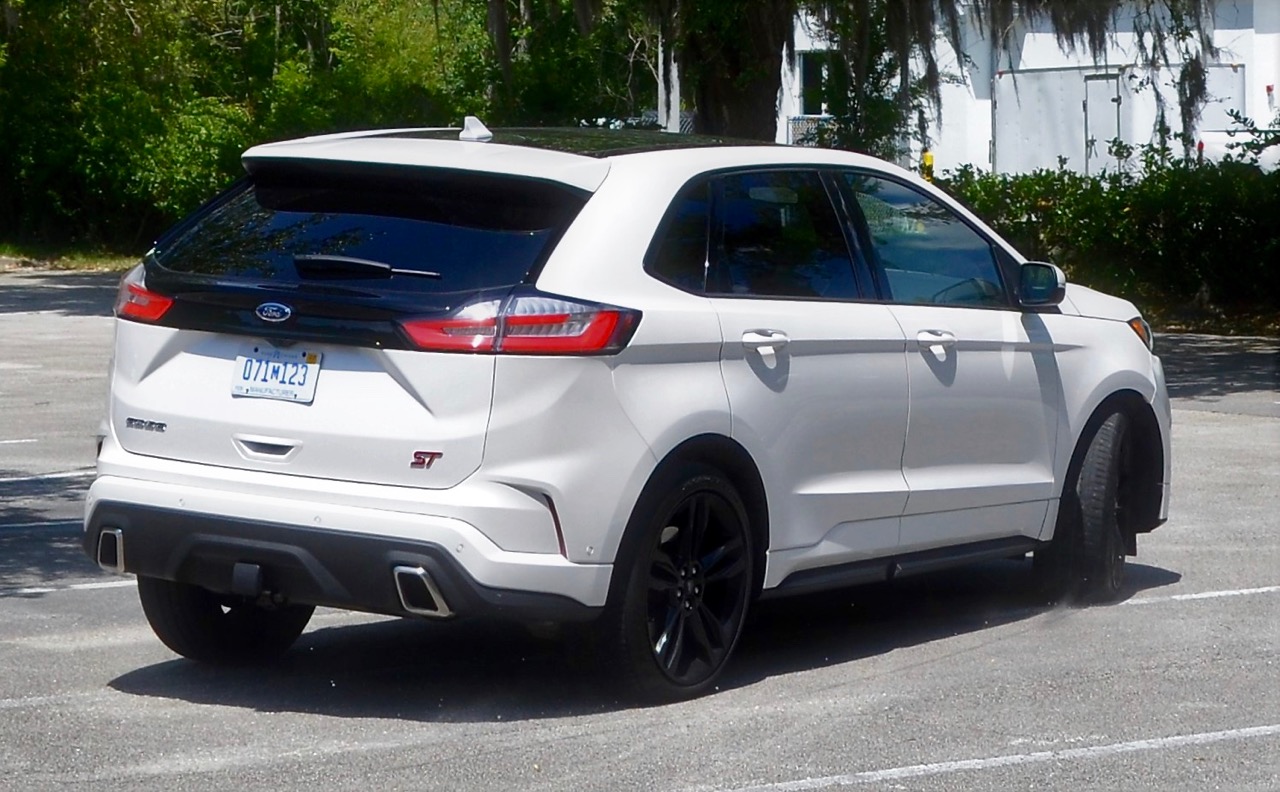 Downshifts were clean and quick, the paddle shifters also responding when asked with fairly quick shifts and a throttle blip downshifting. “Sport” mode did hold a gear longer on acceleration. But it was sometimes clumsy in a downshift in “Sport,” and even jumped from first to third on some launches in “Sport.” We averaged 21 mpg on premium. 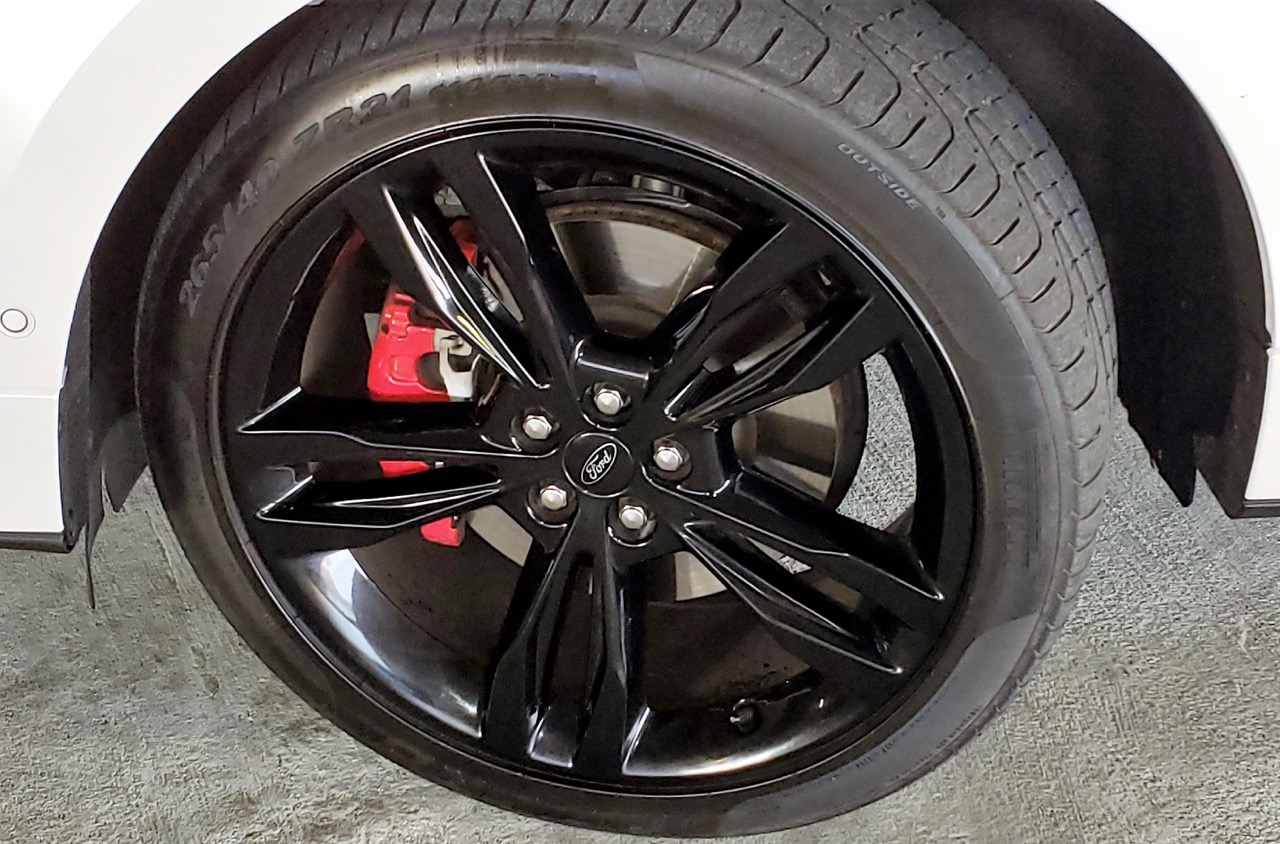 An active or adjustable suspension isn’t part of Ford Performance’s work here. But its MacPherson strut front suspension, and the independent integral link in back get isolated sub-frames and a firmer ST tuning. And it all rides on serious P265/40ZR21-inch Pirelli P-ZEROs. The result is a very firm ride with quick rebound control, not harsh on smooth roads, with decent buffering at the limit. But on stuff like the cobblestone crosswalks in our downtown, it was a bit rough-edged.

You still feel the Edge’s weight, but it’s well controlled in daily driving – it grips and goes very well for its size and height. It was flat and glued in to sweeping turns, the power steering weighted and accurate if a bit artificial in feel. We’d get a hint of understeer up front in corners when pushed, and then it would even out as the system shifted power aft.

Alas, no Focus RS’ torque-vectoring all-wheel-drive. But the very sticky Pirellis let us toss the Edge ST around – secure that it would stick. Work harder in our tight skidpad and understeer was there as well as some body roll from a two-ton crossover, a foot taller than most sports sedans. Pushed with traction control off, and more understeer appeared, no ability to get the rear rubber to play.

As for braking, the 13.5-inch front and rear vented discs had great initial pedal feel and solid stopping power, but faded after three hard hits from 60 mph. The end result is speed with control up to a fairly high limit, but less than that German competition offers without the same handling finesse.

For safety, there’s forward collision warning, pre-collision assist with pedestrian detection, blind spot warnings, lane-keeping alert and assist, auto-high beams and hill-start assist. Adaptive Cruise Control does what most high-end competition does – maintain speed and distance to a full stop, then resume when you tap that button. 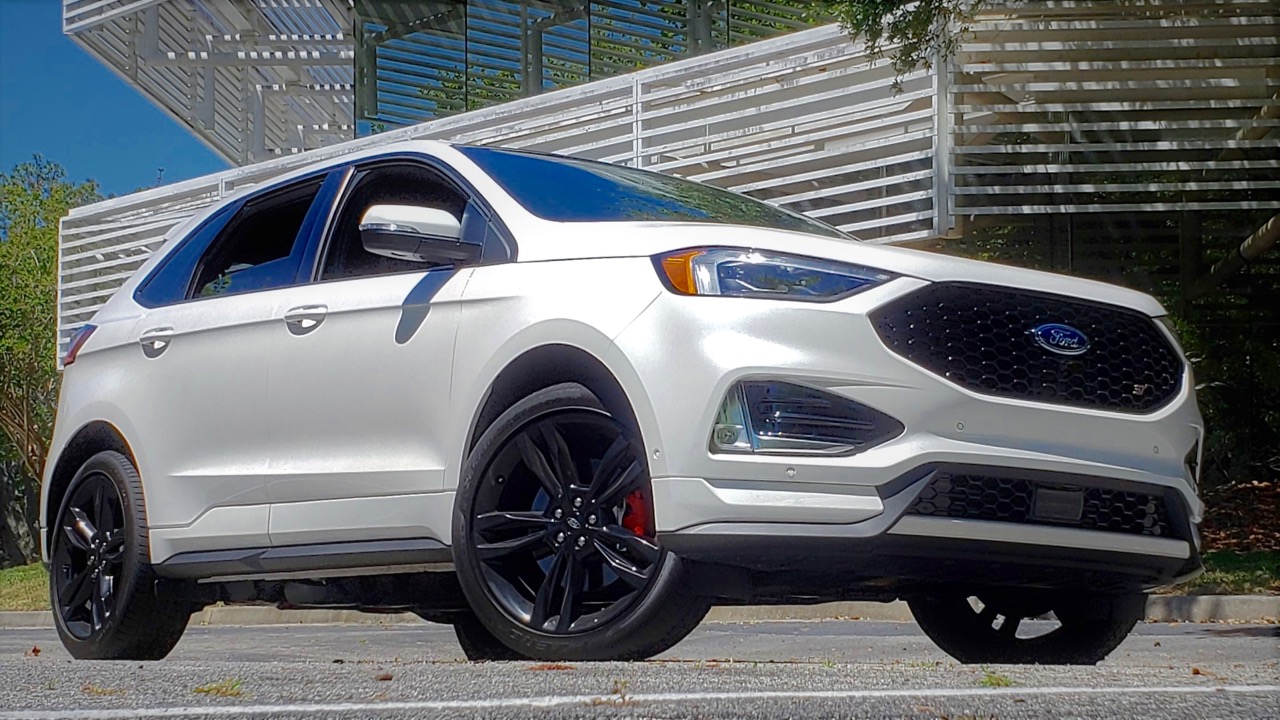 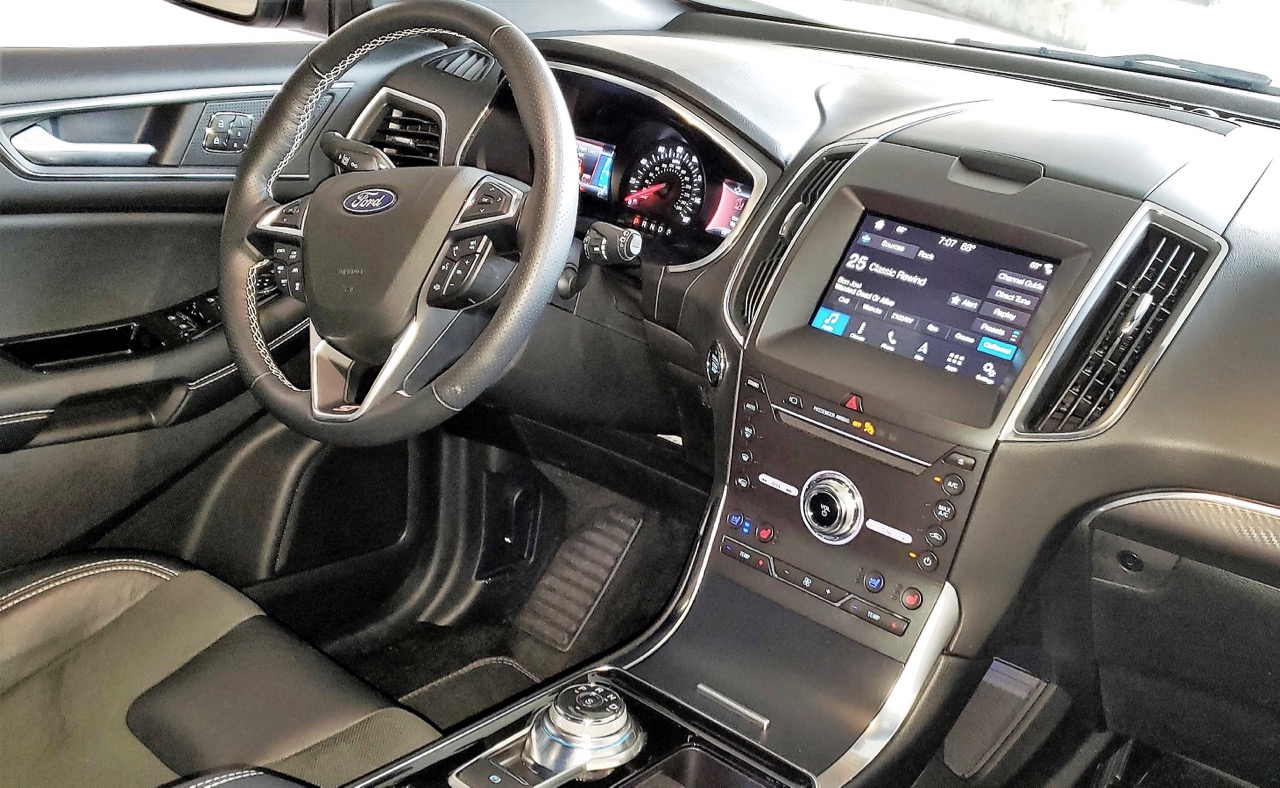 Inside, Ford Performance kick plates greet you, plus seriously bolstered and very supportive black leather bucket seats with suede-like inserts and double white stitching on bolsters. Both get 10-way power adjustments and lumbar, along with heating and cooling, and were firm and held us in well in curves. Black on black is the color scheme with a slim slash of pseudo-carbon fiber on the dashboard. There’s an analog 160-mph speedometer dead center framed in digital displays that are fully configurable. The left display gained a small 7,000-rpm tachometer when the Edge ST is put in “Sport” mode. The right display toggles between stereo and trip computer information. 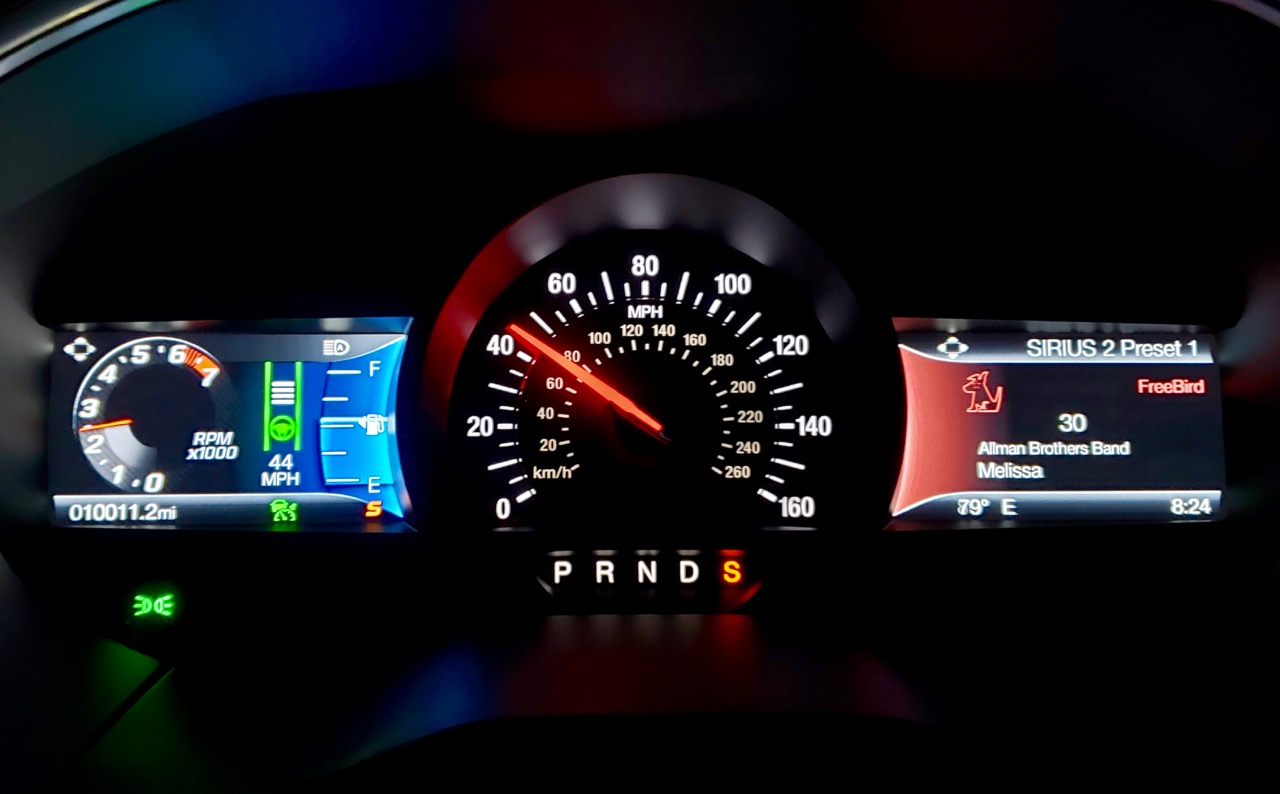 The dash-center’s 8-inch touchscreen handles a powerful 12-speaker B&O PLAY audio system, plus climate control, phone, settings and FordPass Connect with Android Auto, Apple CarPlay, Ford+Alexa, Waze navigation and apps. There’s a Wi-Fi hotspot with Internet access for up to 10 devices. An inductive charger for smartphones is under a door below; big enough for new bigger screen phones.

The new rotary gearshift knob lives in the center console with electronic parking brake and dual cup holders and variable color accent lighting. In back, good head and leg room for two or even a third in between, with rear a/c vents, plus 115- and 12-volt outlets. The hatchback opens with a wave of a foot under the bumper, while rear seatbacks recline, or split 70/30 to expand a wide and flat cargo area. There’s also a storage area and pump – no spare – under the floor. 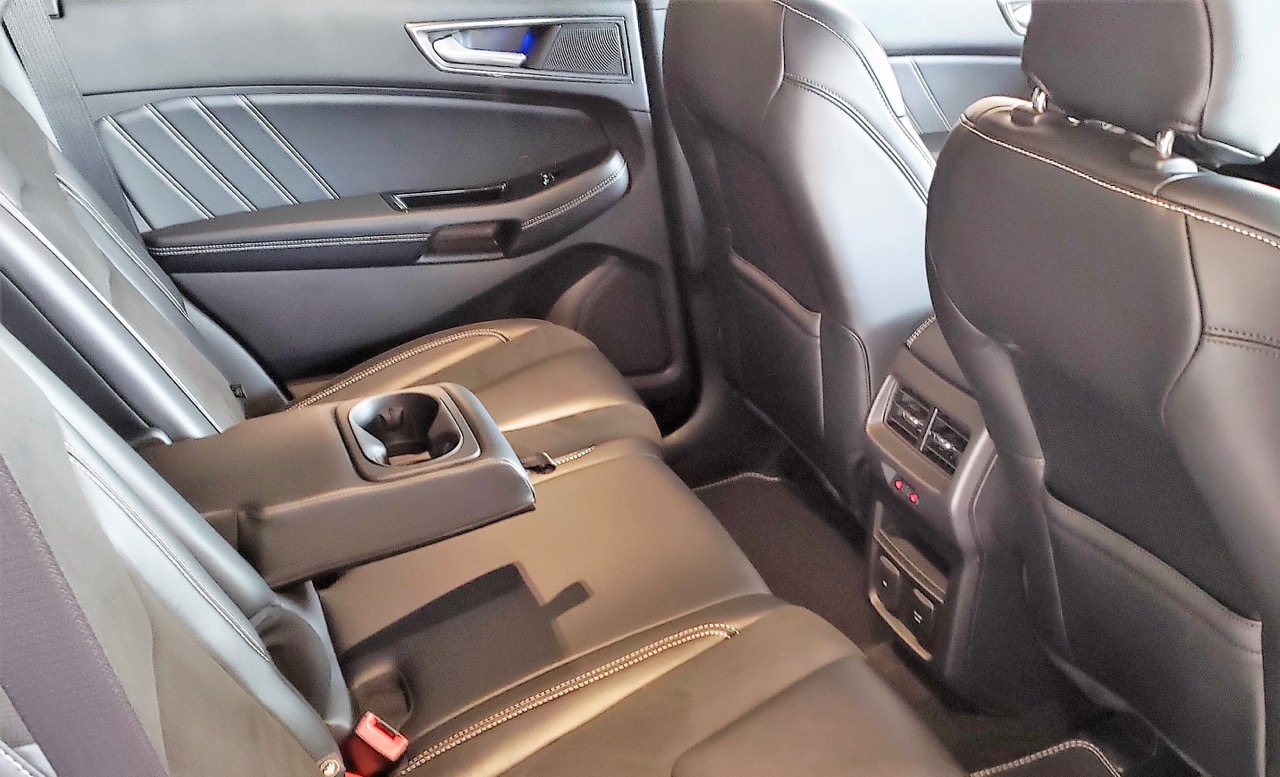