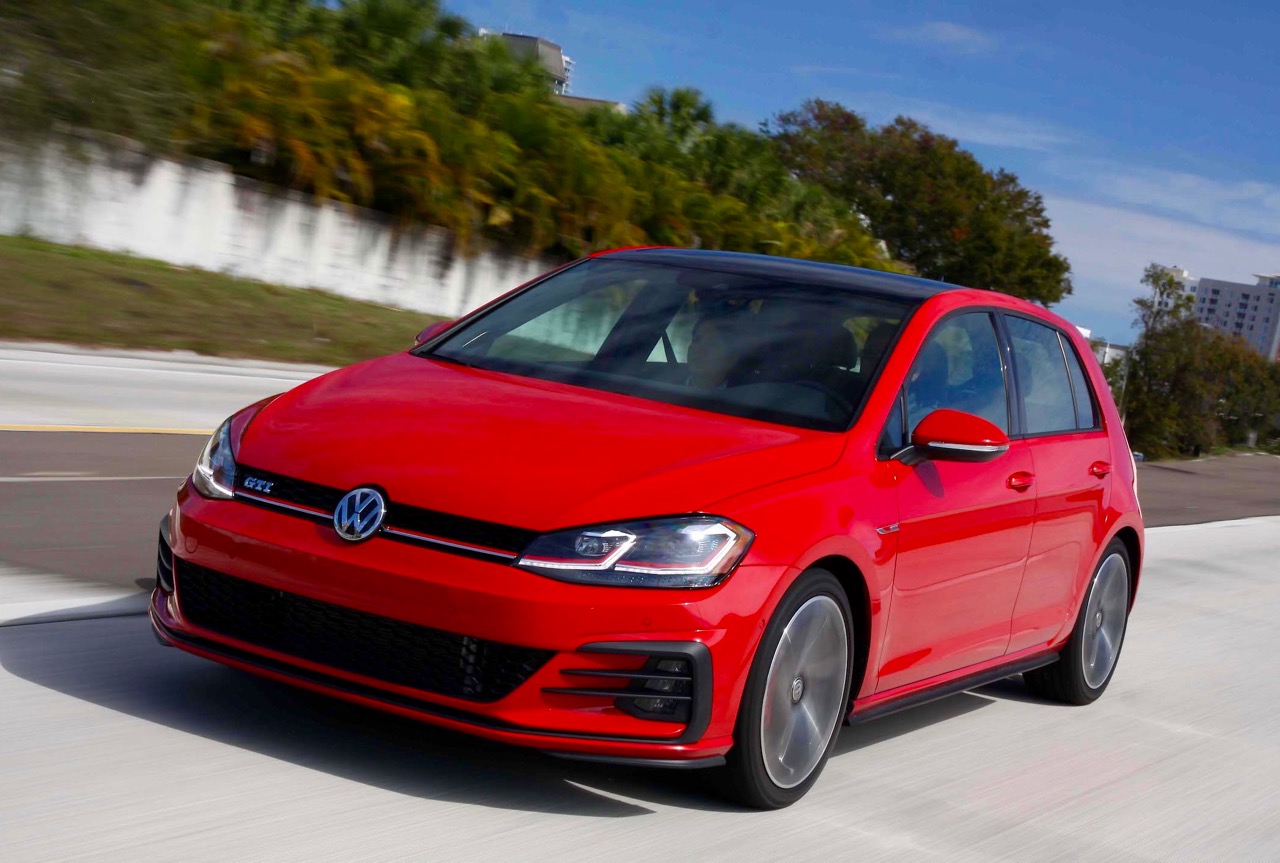 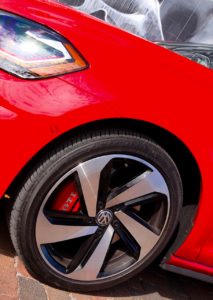 Imagine, for a sweet second, you could ride up front on Space Mountain, grab some imaginary wheel and steer through all those twists and turns. That’s kinda what it feels like to pilot VW’s latest Golf GTI Pocket Rocket through a snaky stretch of backroad. The squirrel-like way it changes direction, the laser-precision of its helm, the light-switch action of its gearshift, the sheer ooomph from its turbo motor; all just sensational.

After a quite-staggering 42 years in production, the GTI is still the ultimate hot hatch, still the absolute benchmark for bang-for-the-buck joy behind the wheel. Trust me, this car is so much fun it should be available on Medicaid for mood enhancement therapy! Did I mention you could drive away in a ‘18 GTI for $27,265 including destination? 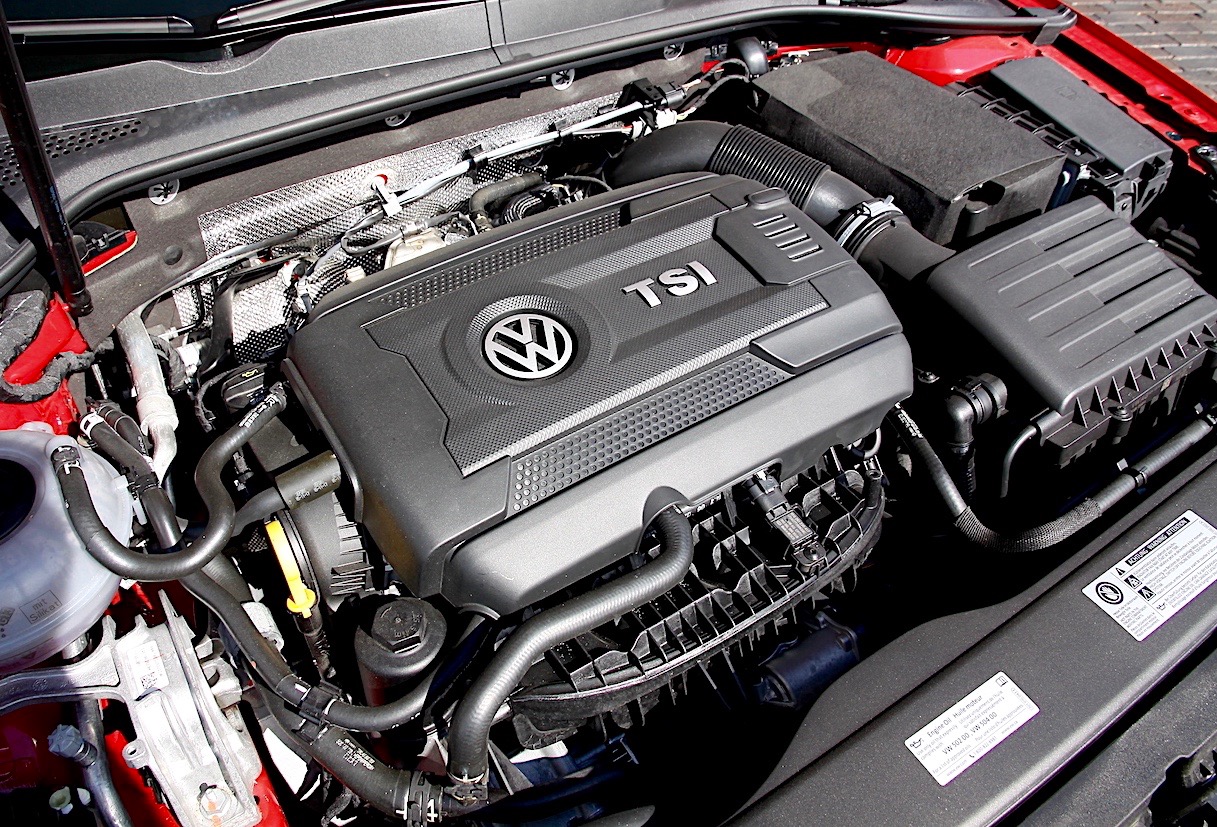 And the folks at Volkswagen just keep nibbling away at making the GTI even better. For 2018 every GTI gets an extra 10 ponies, taking the coral up to a feisty 220-horsepower. Every GTI gets new bright-white LED headlights and a bigger infotainment screen. There’s also more safety tech, like standard pedestrian detection.

Step up from the nicely equipped entry model to the $31,320 SE or top-of-the-line $37-grand Autobahn, and you get beefier brakes (from the Golf R) and a limited-slip front differential. The leather-laden Autobahn we’re testing even has fancy adaptive dampers as standard. And for 2018, every GTI model comes standard with VW’s best-in-class six–year or 72,000-mile powertrain warranty, fully transferable to a subsequent owner. That’s great peace of mind. 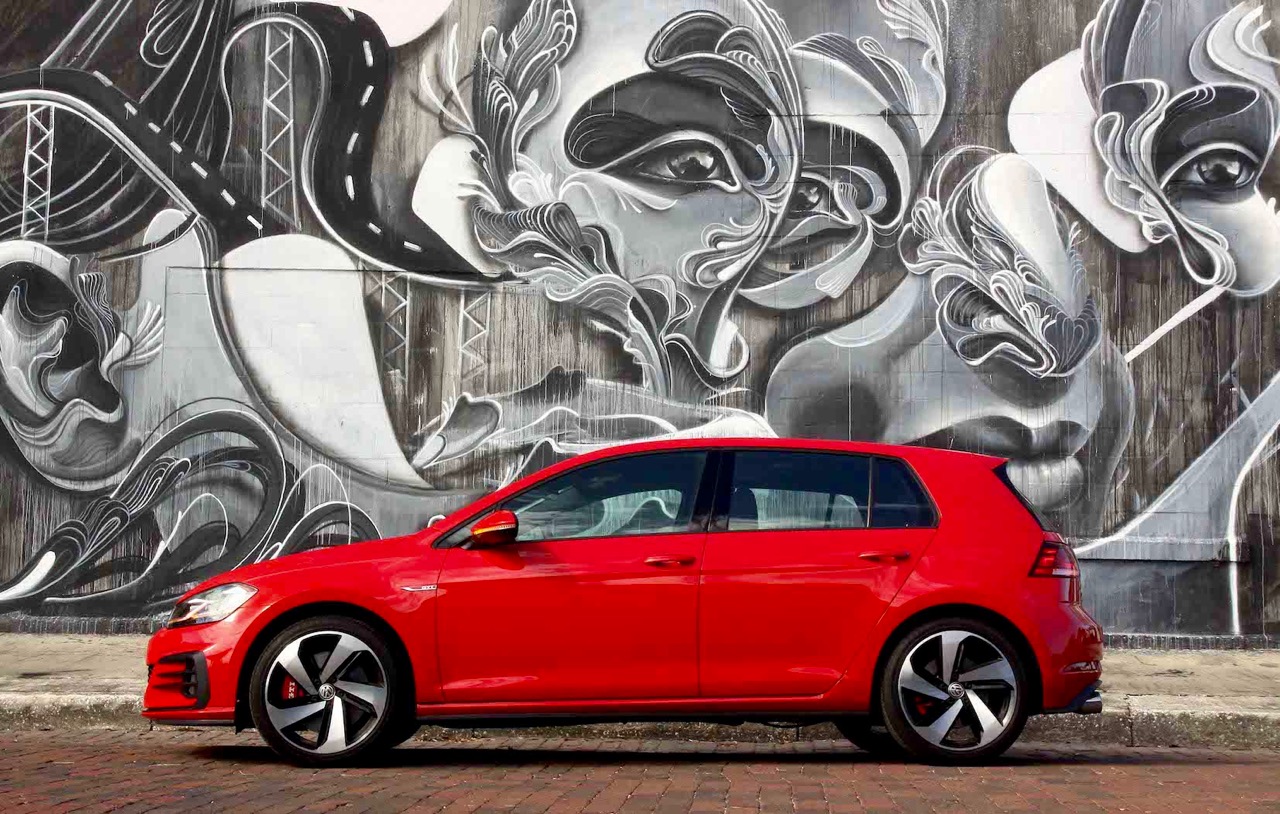 If there’s even more tasty icing on the GTI’s cake, it’s the car’s sheer practicality and versatility. This is a proper four-door, four-seater with a yawning tailgate-hatchback. Fold down the rear seats and there’s more space inside than one of those PODS storage units. Heck, there are New York apartments with less interior space!

What I love about the GTI is that it doesn’t look like some crazy Hot Wheels toy with towering wings, ground-scraping spoilers and blistered arches covering over-sized alloys. Yes, we’re talking about you, Honda Type R! 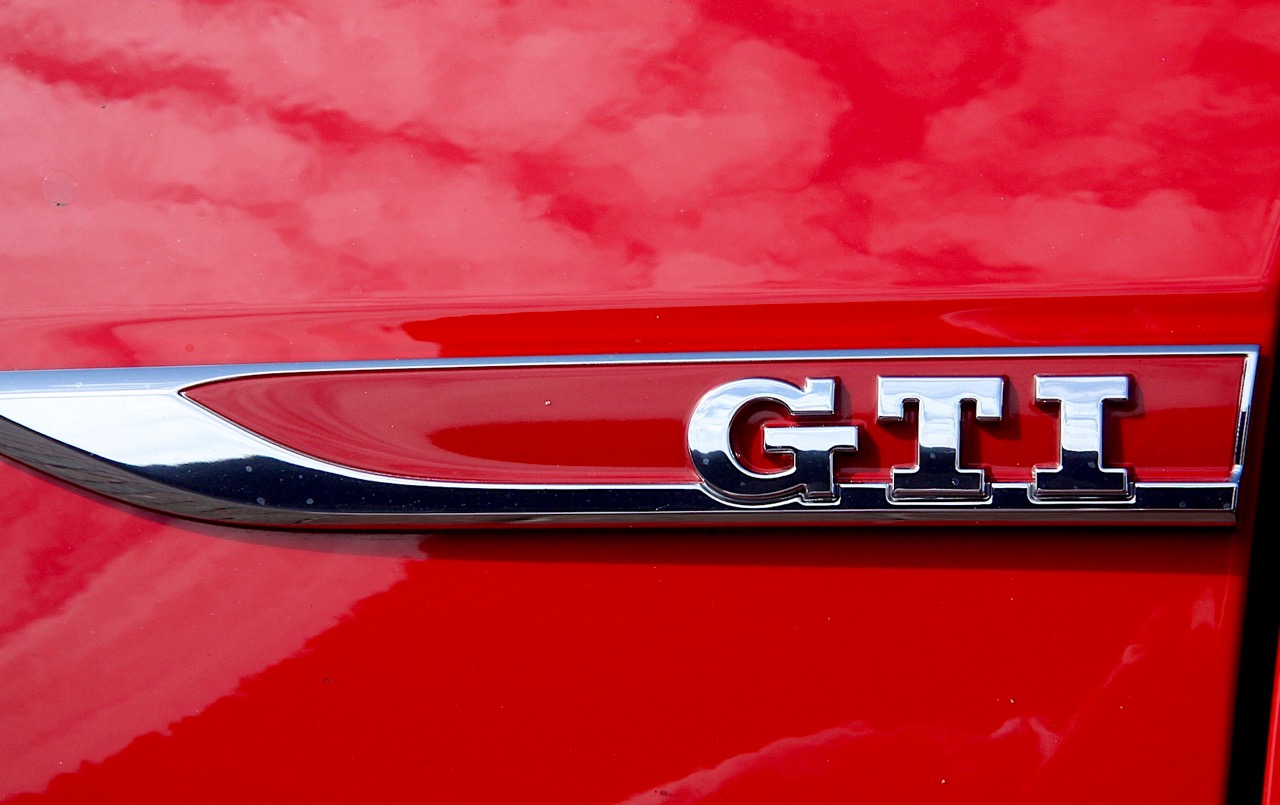 By comparison, the GTI is all restrained Euro-cool with just the right level of performance appendature. Up front, there’s a purposeful front spoiler with air blades at the lower corners, discreet side skirts and body-colored spoiler over the rear window. Spy one on the street and it would hardly command a second glance. Which, as a bonus, also applies of highway patrol officers. 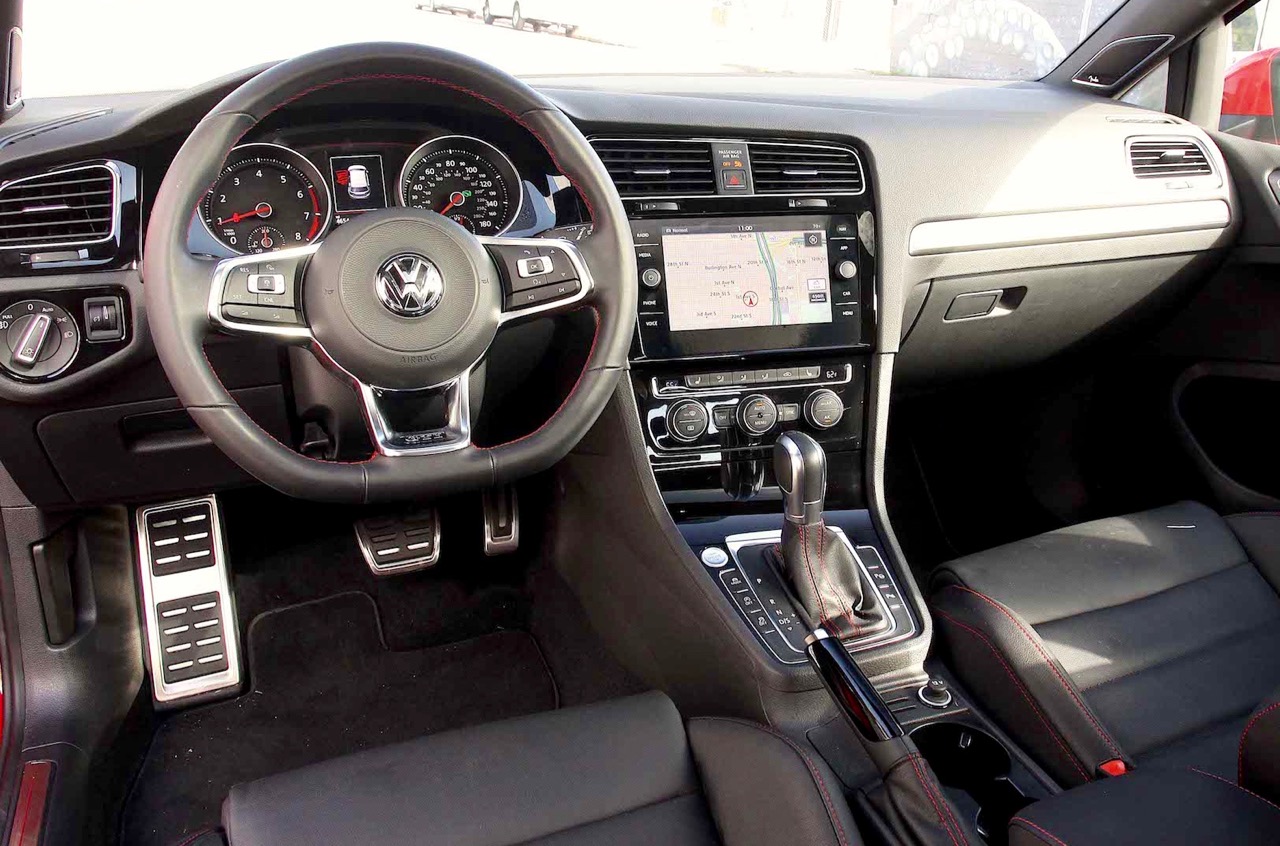 Slide into that hip-hugging driver’s seat and you instantly feel at home. All those years of development have created a cabin that is high in quality and design, and a masterpiece of functionality. There’s nothing gimmicky here; the instruments are a model of clarity, the switches set the benchmark in ease of use, and that chunky, leather-wrapped wheel is simply divine to hold.

Hit the start button and two liters of turbo direct injection four-cylinder burst into life. With 220 horsepower it’s not the power leader in the class; the crazy-fast Civic Type R packs a 306-horsepower punch, while the Ford Focus ST boasts 252-horsepower. 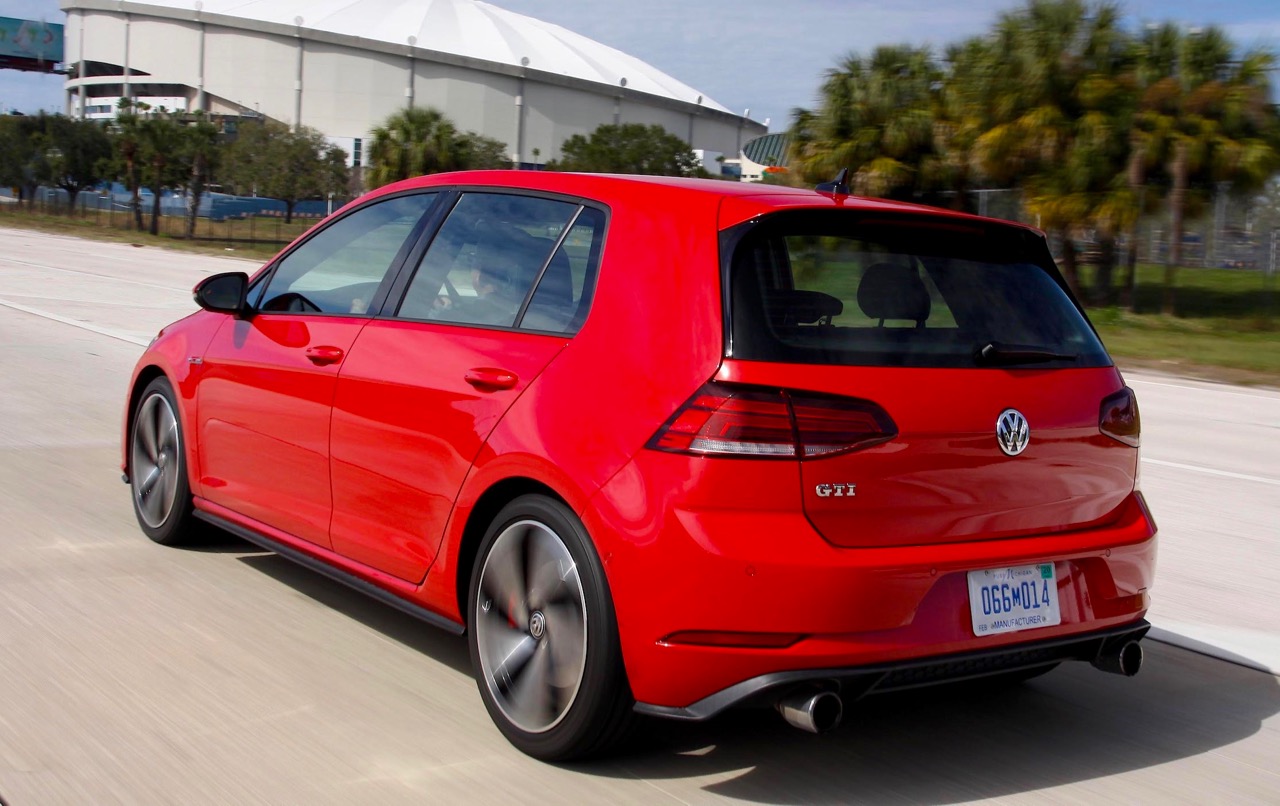 But it’s the smooth, energetic, caffeinated way it delivers its horseys that impresses so much. The amount of power feels just right, delivering 0-to-60 mph sprints in a hair under six seconds without making the front wheels feels over-powered. Yet what is the most fun about the way the GTI drives is its sheer tractability. Squeeze the throttle from walking speeds in second gear, and the car just surges forward courtesy of the motor’s 258 pound-feet of torque available from a low, low 1,500 rpm.

Our Autobahn test car came with VW’s remarkable six-speed dual-clutch automatic with paddle shifters, and it is still one of the finest transmissions out there. It’s intuitive, rapid-fire in its shifts, and as smooth and immediate as flicking on a light switch. 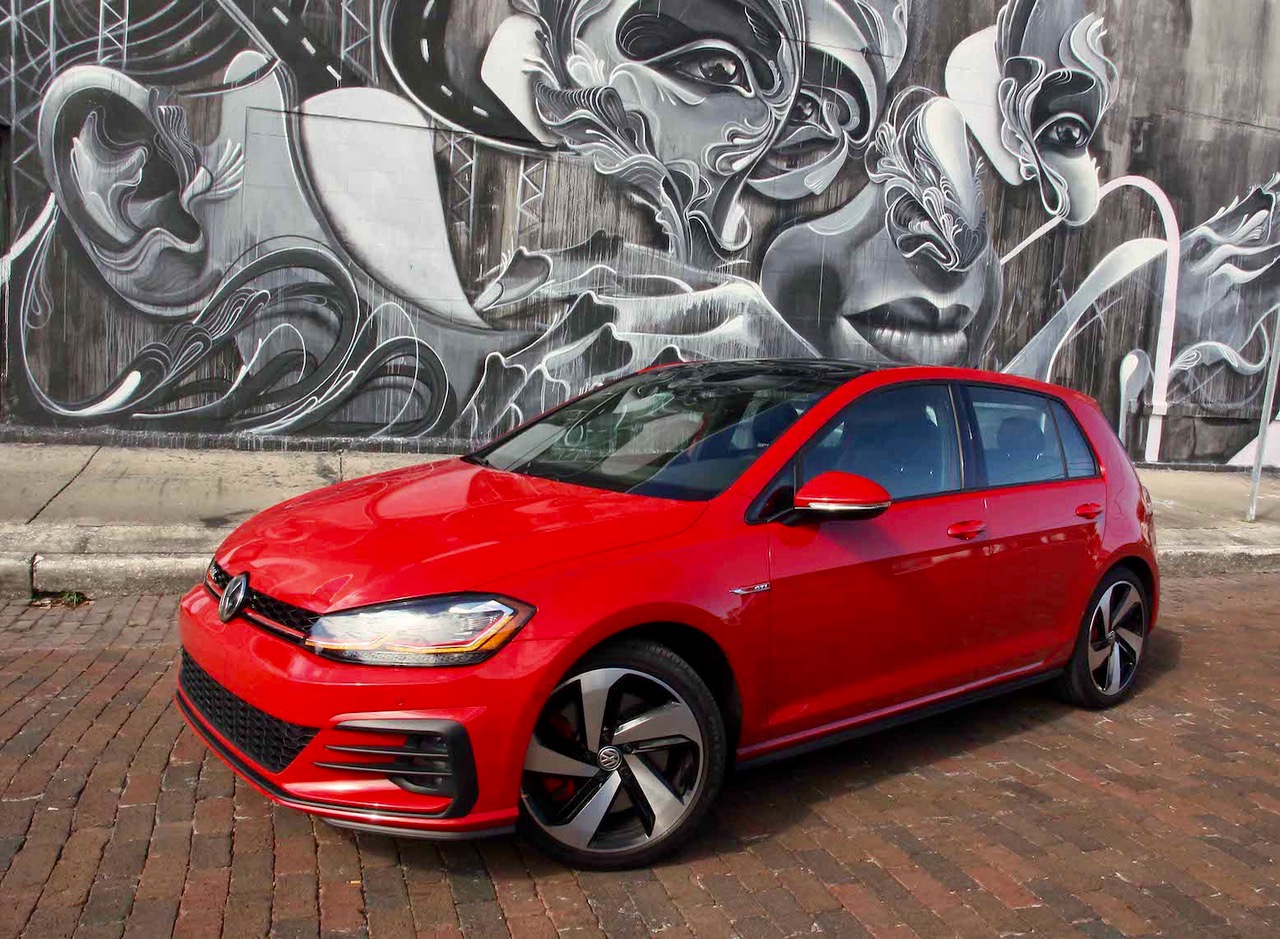 Where the GTI is still guaranteed to put a Julia Roberts-like grin on your face is with the way it handles. This is fun with a capital ‘F’. Even the base car carves curves like it’s running on invisible rails, but with the Autobahn’s standard adaptive dampers, you pick your own setting, from Comfort, Normal, Sport, or Individual. It’s like driving a 3,200-pound four-door go-kart.

For me there’s no finer, fun-driving, daily driver to make any and every trip a grin-inducing blast. I love this car, and for the price – even the $27-grand base car – there’s nothing that compares. Yes, it’s just that good.

For more information about the hottest rides from VW, please visit http://www.vw.com/models/