Skip to content
Mercedes-Benz throws down the gauntlet to Porsche’s 911 with its breathtaking new AMG GT S super-coupe. Road Test Editor Howard Walker takes it for a spin. 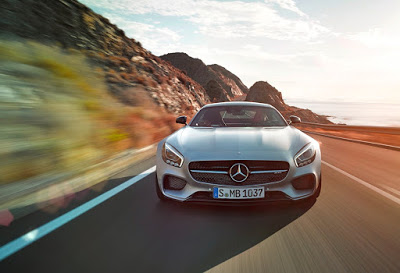 Here is the demonic descendant of Merc’s short-lived SLS supercar – the one with those funky gullwing doors, wrath-of-Thor soundtrack and $200,000-plus sticker. With this new AMG GT S however, Mercedes is targeting a broader demographic: sports car lovers with around $130,000 burning a hole in their chinos! Buyers with class acts like Porsche’s latest 911, Audi’s R8, Jaguar’s F-Type R and Aston Martin’s Vantage on their shopping list. The Merc scores huge on looks alone. Drink-in for a second all the sweeps and swoops of this piece of automotive art.

From those air-gulping intakes up front, to its mile-long hood, to that sensuously sculpted rear-end, this car gets more dropped jaws than Amal Clooney in Oscar de la Renta. Just standing still, it looks as if it’s clocking a buck-ninety on the Autobahn! 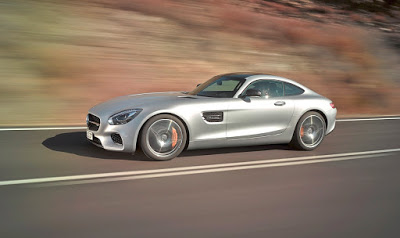 Thankfully the GT hasn’t inherited the SLS’s cormorant-drying-its-wings gullwing doors. They may have looked sexy, and given a nod to Mercedes’ legendary 300SL Gullwing from the 1950s, but they made getting in and out of the car a lesson in physical origami. That, and I whacked my head on the things every time I clambered out. 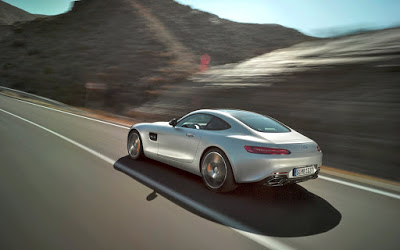 Not that this latest AMG rocketship is that much easier to slide into. With its roof just over four feet off the asphalt, you need the flexibility of a limbo dancer to drop down into the racecar-inspired cockpit. And once inside, you don’t so much sit in the car as wear it, with seats that grip you so tightly as to be verging on intimate. But grab-ahold of that salami-thick,
suede-covered helm, gaze out along that supertanker-long hood, and you could be on the front row of the grid at Sebring.

But who the heck decided the gear selector should be in the back seat? 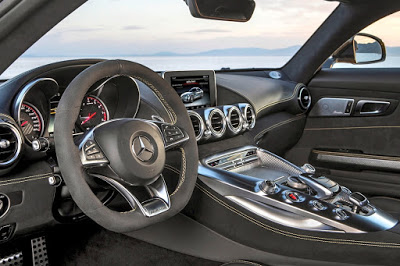 Seems there wasn’t enough space for cupholders and the stubby shifter at the front of the center console. Unbelievably, especially for the purists at AMG, the cupholders won and the shifter was pushed just far enough back to be irritating. Thankfully the engine start button is where it should be, and a quick press ignites one of the most magical powerhouses in the auto kingdom.

It’s Mercedes-AMG’s new 4.0-liter twin-turbo V-8 packing 503 horsepower and 479 pound-feet of torque . It’s one impressive piece of design that squeezes those dual turbochargers tightly into the center of the “V” for compactness.

The compact size, together with its dry sump lubrication, allowed the designers to mount the V-8 well behind the front-wheel centerline and low in the chassis. This, along with bolting the seven-speed dual-clutch automatic at the back of the car, makes for truly awesome handling.

And boy does this car fly. Stomp on the throttle and it will catapult you from standstill to 60 in just 3.7 seconds, and not quit catapulting till the speedo needle is kissing the 193-mph mark. With every one of those 479 turbocharged torques on tap from just 1,750 rpm, the GT delivers mind-blowing mid-range thrust.

You can also tailor the car’s engine responses to your mood swings. C-for-Comfort tones down the exhaust thunder for morning commutes, while full-on Race mode makes you feel like Vin Diesel in Fast and Furious 7. It’s crazy! 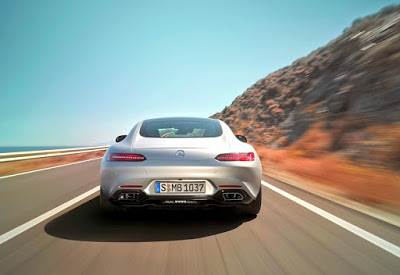 You’d need a racetrack, however, to come anywhere close to exploring the upper echelons of the Merc’s handling prowess. On our Floridian highways and by-ways, this car is so agile, and so freaky fast through curves, that it never feels like it’s breaking a sweat.

No wonder then that the hot shoes at Motor Trend mag recently awarded the AMG GT their coveted ‘Best Driver’s Car 2015’ accolade.

I love this car. Love it for its race-focused character, its bad-boy, blunt-instrument demeanor, the pure driving excitement it offers, and its truly breathtaking looks. At $130-grand, it’s a steal!

For more information on the latest luxury-performance vehicles from Mercedes-Benz, please visit https://www.mbusa.com/mercedes/future/model/model-All_New_2016_C190_AMG_GT